Update! The Potential Name of the Dubrovnik Location from The Last Jedi Revealed? - Star Wars News Net Go To Top
Skip to content

Update! The Potential Name of the Dubrovnik Location from The Last Jedi Revealed?

The guys from Making Star Wars may have very well figured out the name of the planet represented by the real-world city of Dubrovnik in The Last Jedi. Since we’re not sure if the name is intended to be a surprise and if you’re trying to stay away from spoilers, stop reading now.

Last summer I was able to ascertain that a central part of the events that would take place on the world we saw filming in Dubrovnik would be the exteriors of a “Casino Set.” The casino elements and interiors were to be filmed at Pinewood Studios.

While I do not know the exact spelling, I believe the planet to be called Canto Bight after having heard that name specifically several times from quality sources, always in relation to the subject of the Dubrovnik filming.

As you can see, if this is indeed the name, it would be a brand new location in the Star Wars universe. In the past we speculated that this planet might be Corellia or Chandrila. These speculations were based on the bits we’ve heard about a procession happening there and the simple fact the during filming the local militia used helmets with the letters CBPD.

I wouldn’t throw out the possibilities of the planet being Corellia or Chandrila just yet as it is also very likely that Canto Bight is actually the name of a city, given that police departments are typically named for cities and not entire planets. That being said, in the Star Wars universe a planet-wide police force is certainly not out of the question.

Whatever the case, a city or a planet, these helmets are actually  the best proof that this might indeed be the real name of this location. 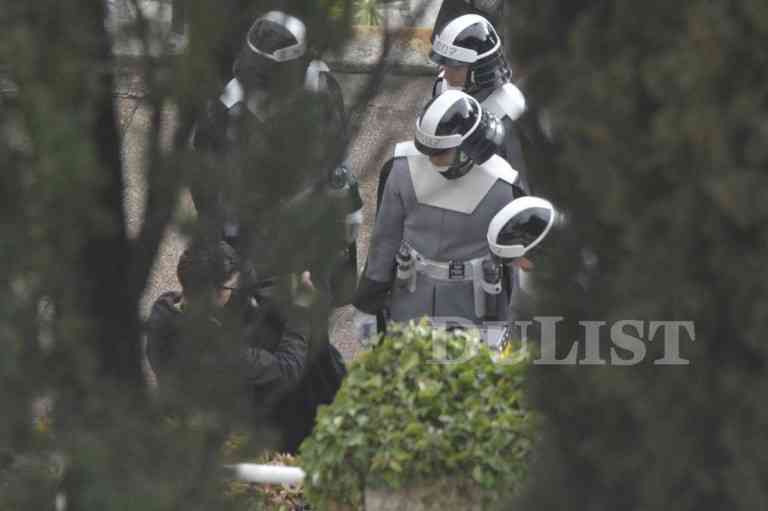 Back in March 2016 we reported that during the filming the guards on set had Aurebesh letters on their helmets (see photo above). Aurebesh is a writing system designed specifically for Star Wars that uses symbols in place of letters of the English alphabet to create the illusion of an alien language. The letters here, transcribed in their English counterparts, can be read as “CBPD”. We speculated that PD was possibly Police Department, but now it seems we have the whole puzzle solved, thanks to this new information – Canto Bight Police Department.

Of course there is still a chance that the letters could mean something else entirely, but for now it seems to be more than a coincidence. What do you think?

We reached out to Jason from MSW and asked him if it’s possible that this is actually the name of the city and not the whole planet. Here’s what he said:

So, only the future will tell if this is the name of the city or the planet. But what matters here is that it’s most likely a real name.