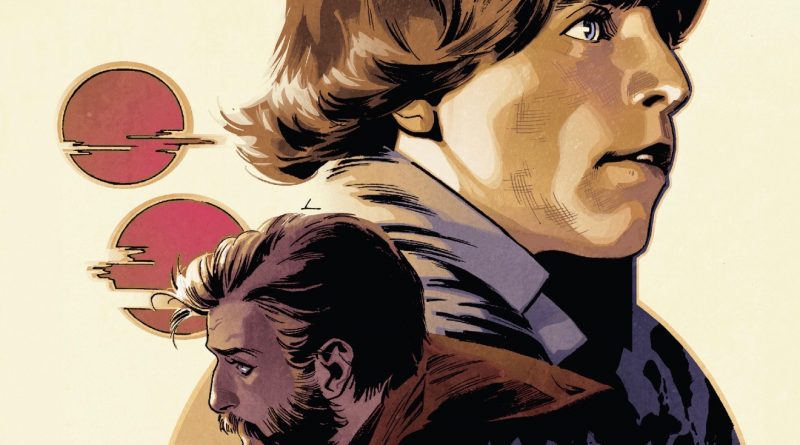 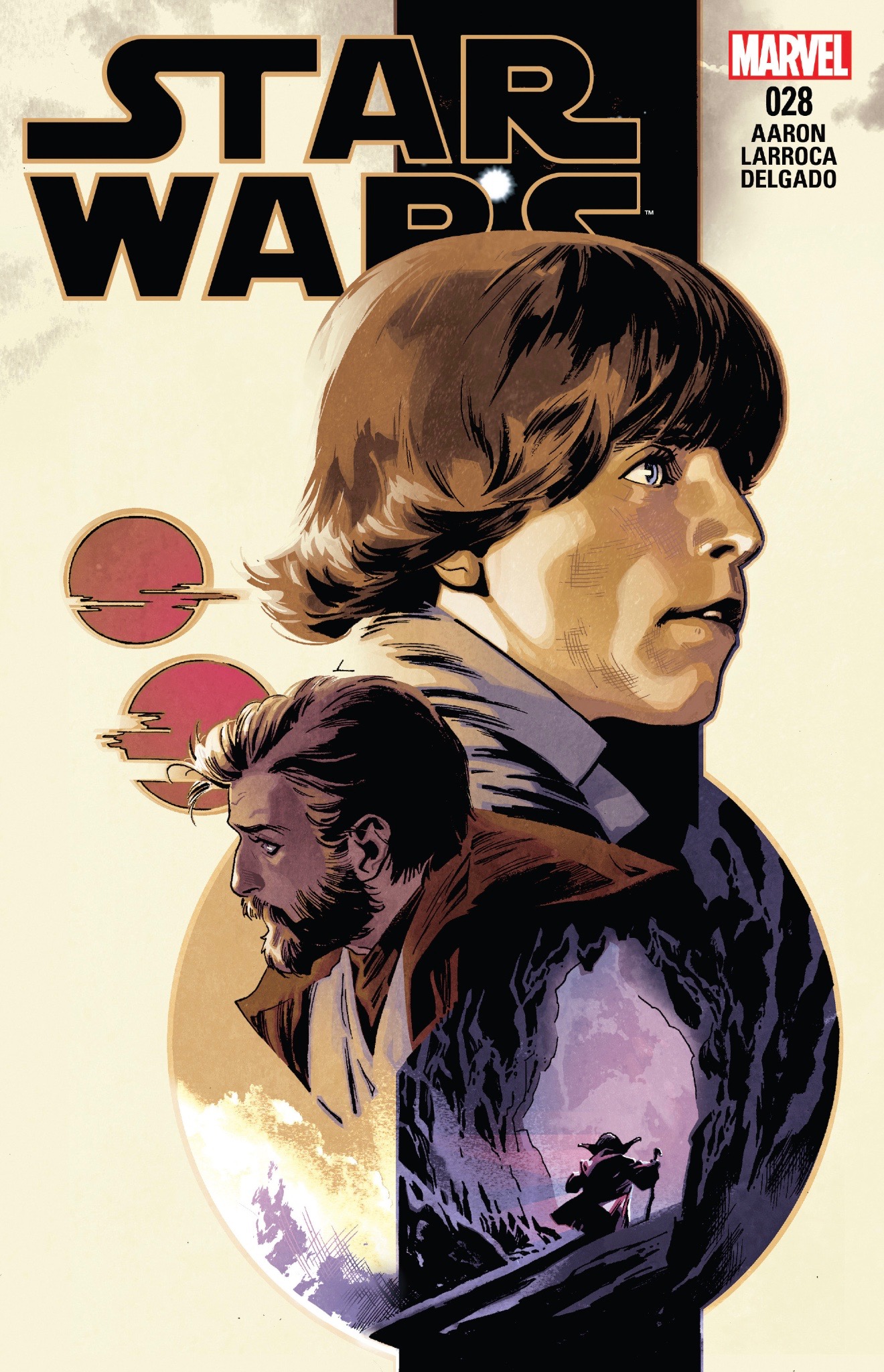 This week, Marvel’s Star Wars returns to continue Yoda’s discovery of a strange planet and it’s inhabitants, who seemed to have tapped into the Force on their own.  Neither Jedi nor Sith, these beings continue to widen the scope of the Force as we fans understand it.  The Jedi Master is undaunted on his journey up an ominous mountain to learn more, but nothing is as it seems.  SPOILERS AHEAD… 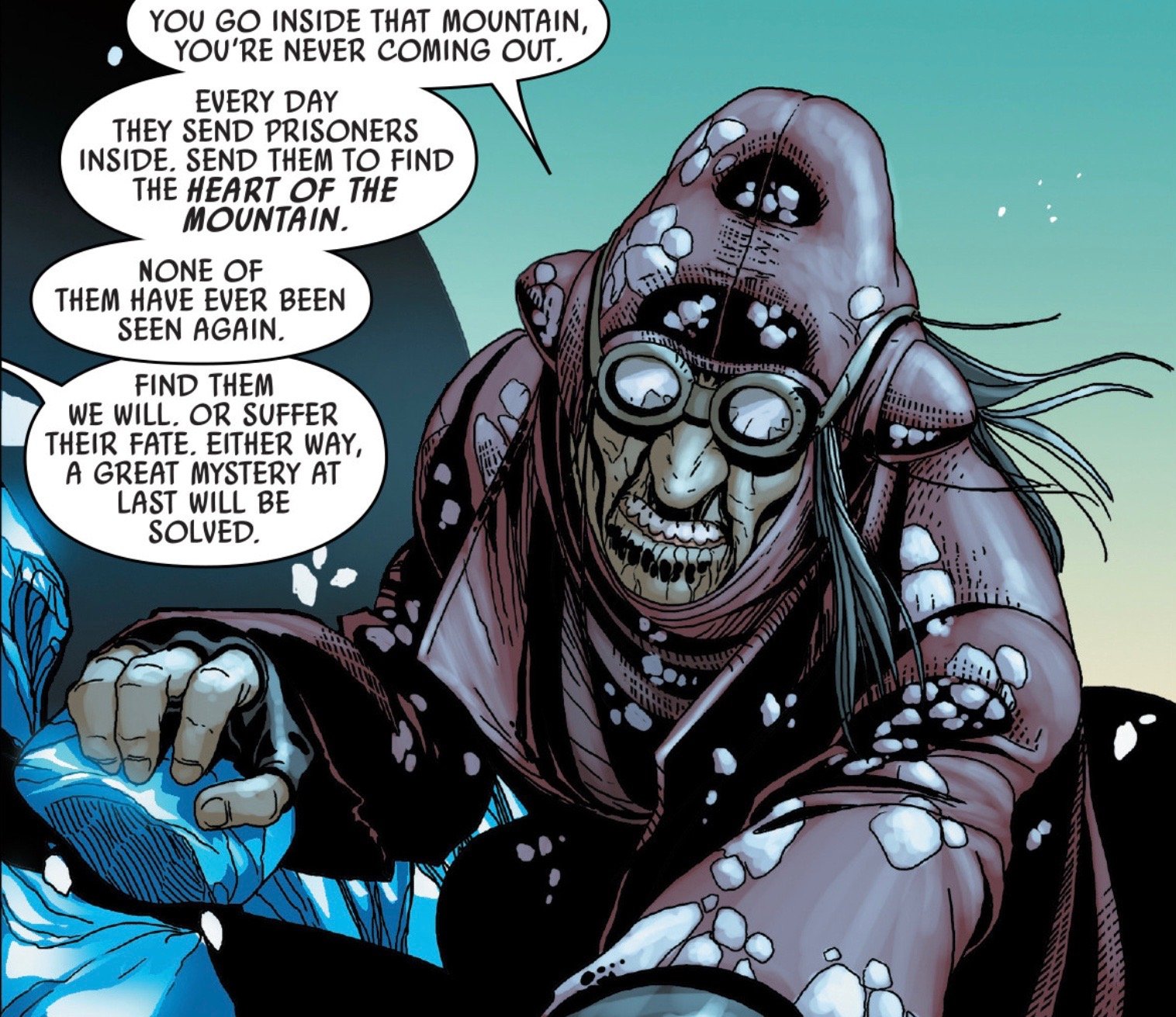 At the conclusion of the last issue, Yoda had ventured to a mountain both the tribe of children he stumbled on, as well as the older tribe they were at war with, to discover more about the war that left the planet so desolate.  We didn’t get much of a glimpse of the older children, other than their archaic weapons made from the stones that seem to channel the Force.  At the beginning of this issue, we join Yoda and his reluctant companion as they make their way far up the mountain.  Yoda seems to be handling himself just fine, especially since the end of last issue had me pretty worried about our little, green friend.  His companion, as you can see, is growing more and more frightened of their proximity to the mountain. 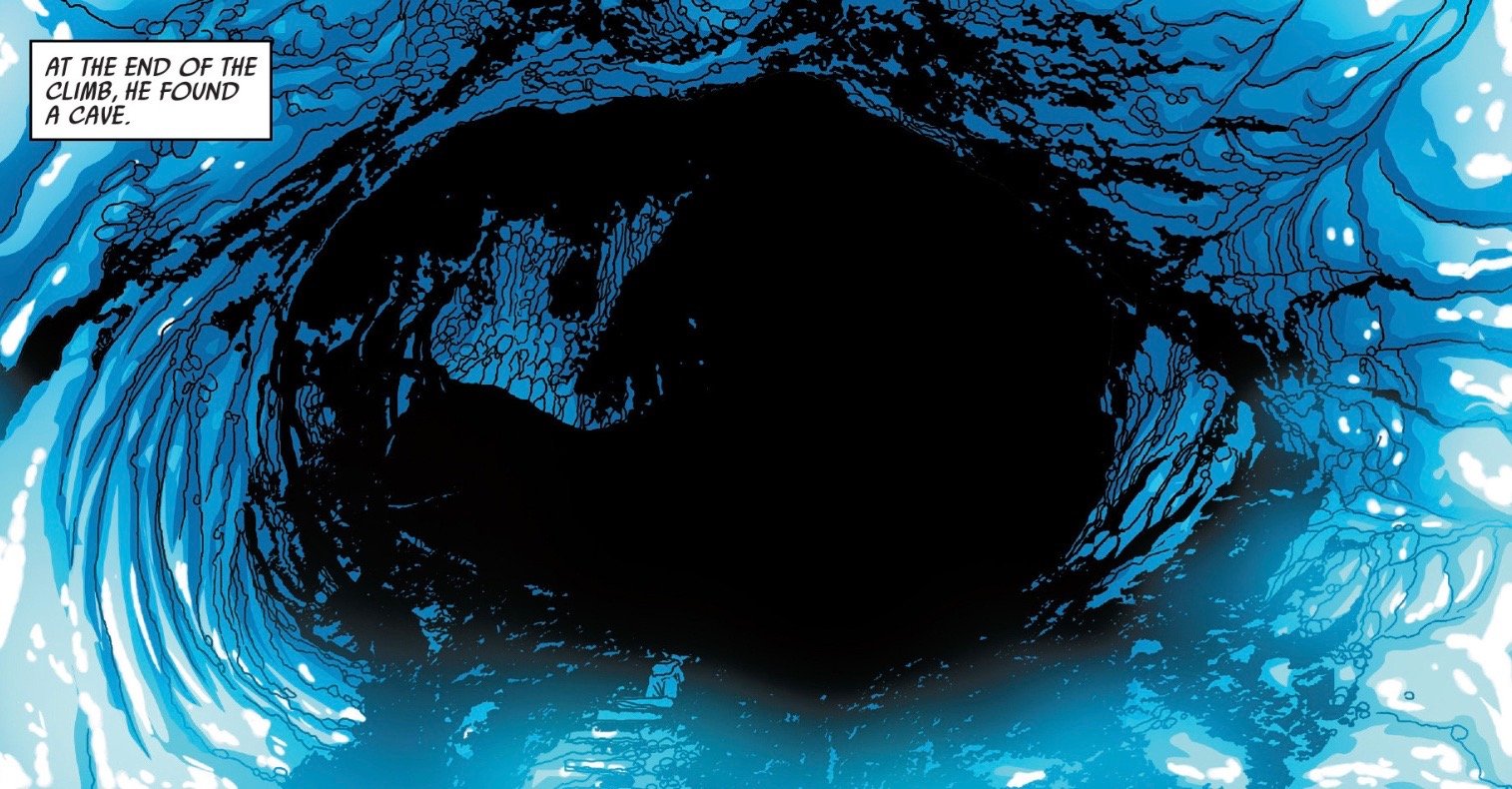 It might be heresy for me to bring up Lord of the Rings here in a Star Wars review, so get your rotten tomatoes and eggs ready, because a lot of this issue reminds me of Gandalf leading the fellowship through the mines of Moroir.  I’ll refrain from any further comparison to avoid any anti-LOTR backlash, but I mean that as a high compliment, since I hold the old wizard in as high regard as I do the littlest Jedi Master.  It probably won’t surprise or disappoint you to learn that Yoda loses his emotionally rattled guide up the mountain pretty early on in this issue.  Uncertainty and darkness do not stop Yoda from descending further into the mountain. 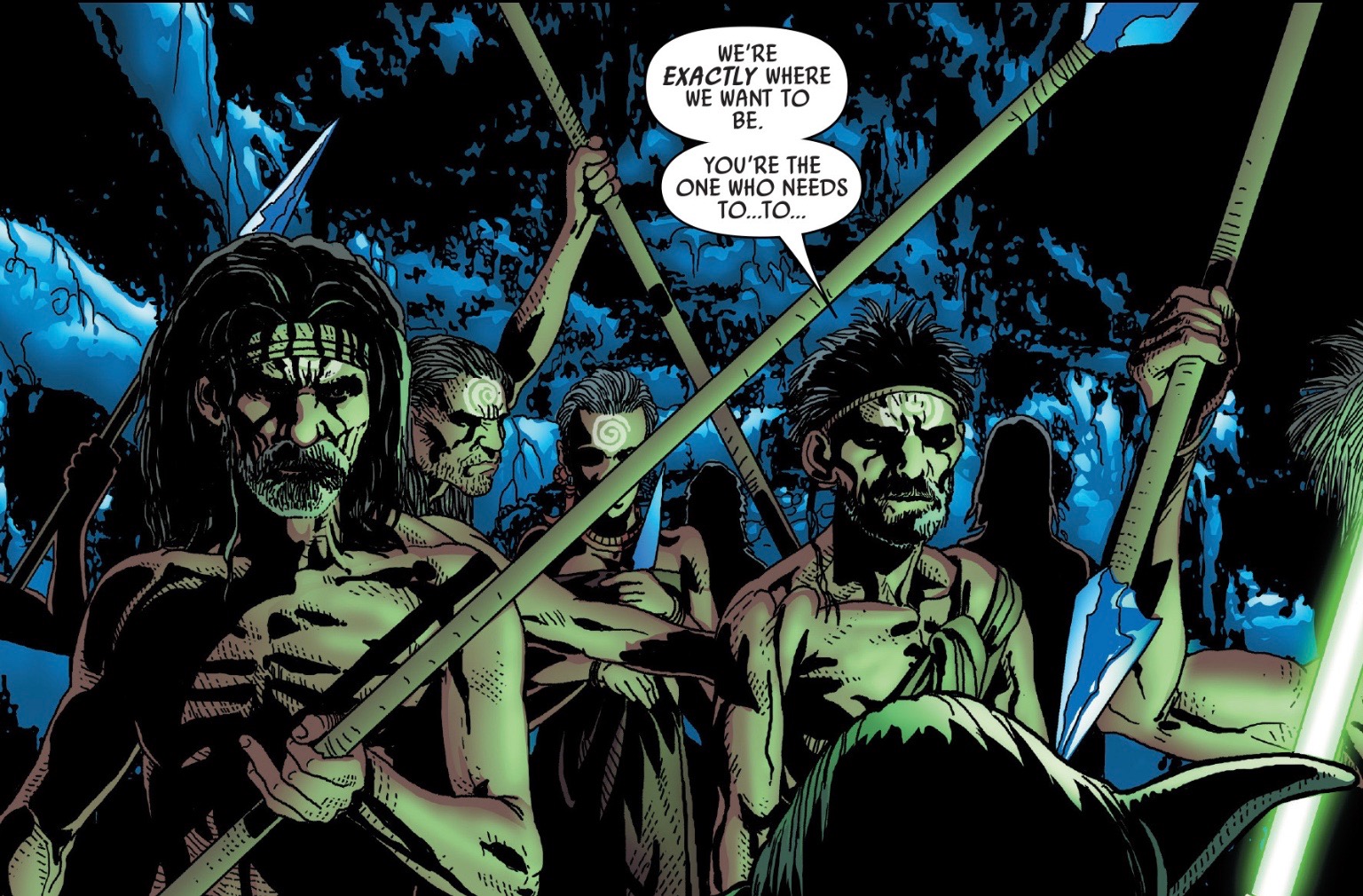 Yoda soon discovers he is not alone.  The parents of both tribes of children have been hiding out inside the cave.  The world Yoda discovered gets stranger and stranger as we learn the parents sought refuge in this cave…from their children. 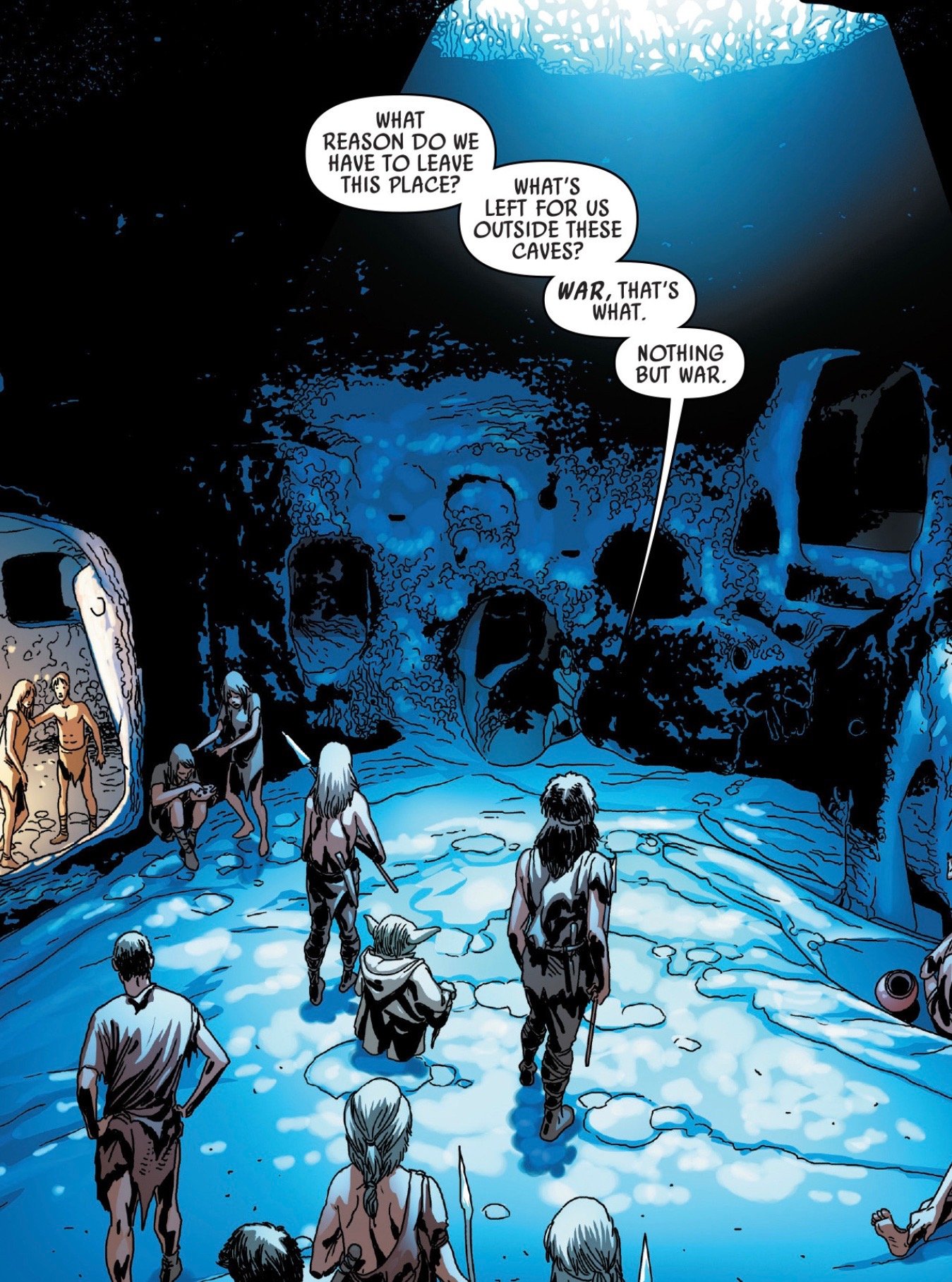 The parents claim that their children started the war and they sought refuge inside the mountain.  It doesn’t take a Jedi Master to call “bullshit” on the parents, just as Yoda does. He reminds them that parents are to teach children right from wrong, good from dark.  Whatever the full story is, Yoda’s clearly less than impressed by these absentee parents who cower in the dark rather than try to teach their children.  “Not on their own are your children.  But, wrestling with the chaos you left them in.  Blame them, I do not.”  That Yoda sure knows how to mic drop when appropriate.

Yoda discovers a young man named Garro, who seems to have been abandoned by both parents and children.  Garro is starving and Yoda helps restore his strength, but as you can see, the Jedi Master wants to learn about the Force as Garro understands it, what the locals call stonepower.  This portion of the story is served well by having Obi-Wan explain how only a humble student can learn the ways of the Force.

Just as soon as Yoda begins his lesson, we take an abrupt turn back to Tatooine, sometime during the Obi-Wan exodus.  Obi-Wan decides to break up what looks to be a blaster duel (one of the opponents you will recognize), when a much older version of Yoda’s new teacher reveals himself.  This is a haunted, powerless version of Garro, who warns Obi-Wan never to let go his grasp of the Force.  Before Obi-Wan can question him further, Garro vanishes, but the tattoo on Garro’s forehead is impressionable enough for Obi-Wan to sketch in his journal.  As Luke reads, he recognizes the tattoo to be similar to a star system, the Vagadaar system.

As we know well, Luke Skywalker of this time period is anything but a virtue of patience.  He sets course for the Vagadaar system, which gives us a name to the location of Yoda’s story.  Luke is convinced this is his ticket to learning more about the Force and becoming a Jedi.  I have a bad feeling about this…

Back to Yoda’s lessons in stonepower, he’s struggling a bit, but Garro is picking up that this isn’t Yoda’s first rodeo.  A few stones knock the little guy around, but when a giant stone is hurtled Yoda’s way and he stops it, Garro is blown away.  Yoda is even surprised by it, and nearly overpowered.  He gives Garro’s training credit, as Garro told him to hear the stones in the mountain, and hear them breathe.

It’s been clear since Yoda landed on this planet:  the Force exists much differently than he’s ever experienced.  Since he entered the mountain, Yoda could sense the Force living in every stone.  By the end of this issue, we realize both he and Garro had little grasp on what was actually going on.  The Force is alive in the mountain, and the mountain itself is a living entity, as you will find out by the last page.  Things look like they’re going to get very BIG for Yoda and Garro.

Bravo to Jason Aaron for really delivering an exceptional, original tale with this “Yoda’s Secret War” arc.  I was a little nervous this issue was going to be kind of a different spin on the issues in last year’s Obi-Wan and Anakin series, but it’s completely different.  I’ve enjoyed every issue and they keep getting better.  As jarring as it can be jumping between three different time periods of the SW Universe, Aaron’s narrative flows smooth and natural.  I wouldn’t want this story told any other way, and the fact that it touches Obi-Wan and Luke is even better.

In case you didn’t already notice from the frames I posted, the artwork in this issue is the best of the arc, so far.  Salvador Larrocca and Edgar Delgado did a lot with a story that mostly takes place in the dark.  I enjoyed every frame of this, especially the ghostly blue hue of the stones.  The Larrocca/Delgado team continues to treat us Star Wars fans right.  I’m very happy they were tasked with this arc.  Also, Stuart Immmonen’s cover (the one pictured up top, not a variant), might be my favorite of all the Star Wars comics so far.  If I were George Lucas, who snatched up all of the Marvel Han Solo original art, I would be making a phone call to grab it.  If George doesn’t grab it, and anyone at Marvel is reading and feeling generous, there’s an empty frame on my wall waiting. 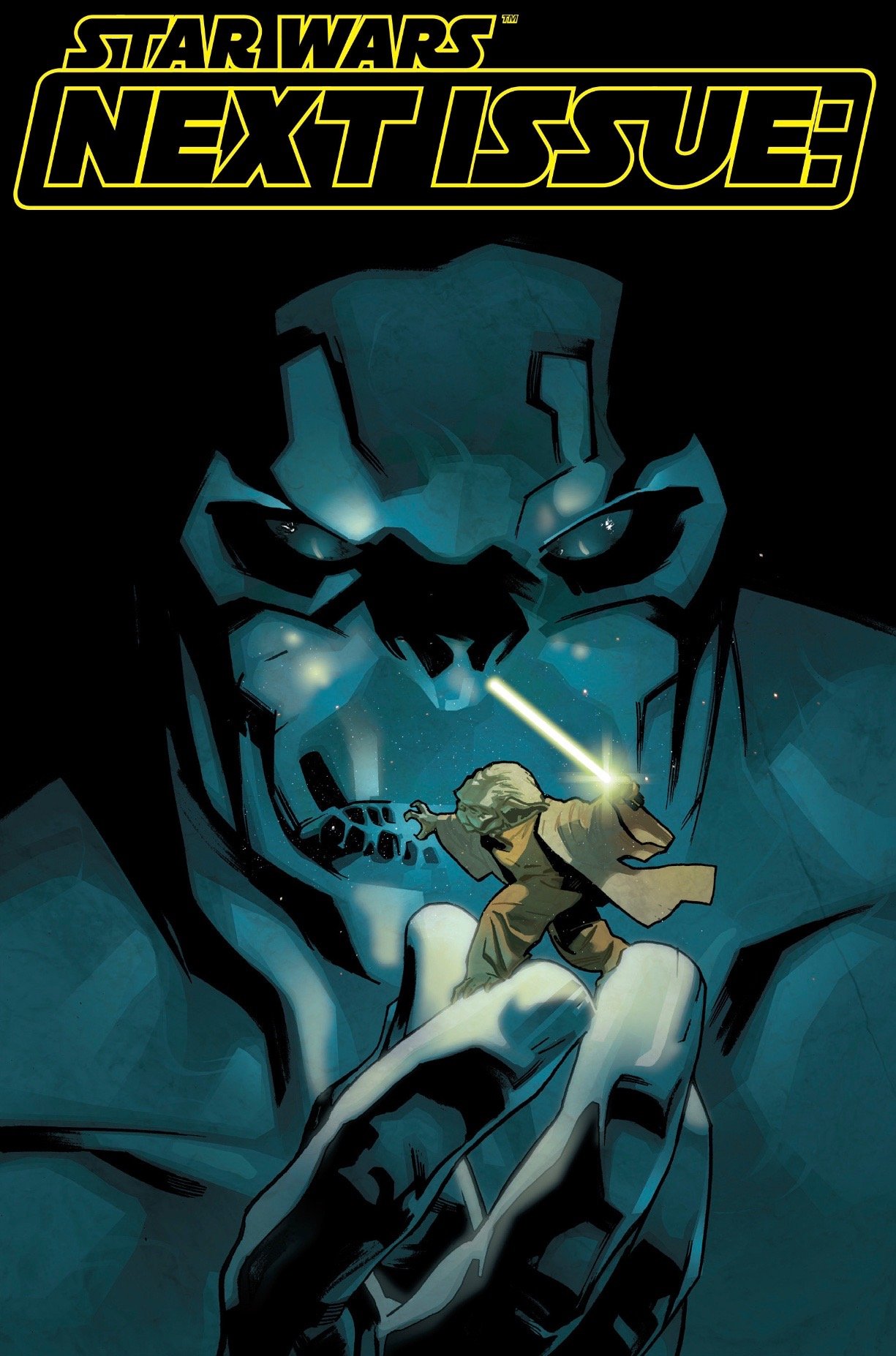 This issue is available at your local comic shop or digitally through comiXology. 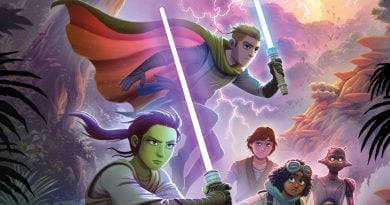 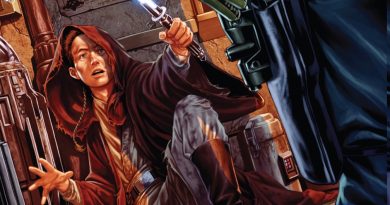 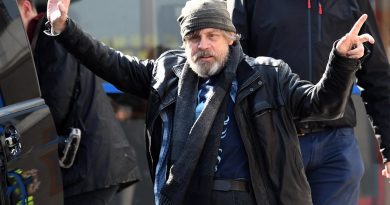