#RogueOneWish Granted – Fan With Terminal Disease Got to See Rogue One Early. 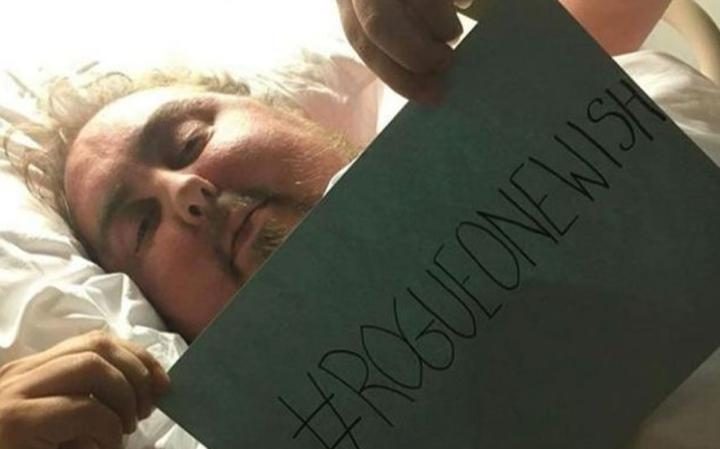 Like Daniel Fleetwood, the family of the terminally-ill fan Neil Hanvey organized a successful social media campaign to let him see a Star Wars movie early. Sadly, he is no longer with us, as he passed one day after he saw Rogue One: A Star Wars Story (or at least an early cut, or scenes from the movie).

Neil Hanvey was sent to Saint Michael’s Hospice in Hereford, UK in April of this year after he had learned that he only had months to live. Hanvey’s wife, Andrew, got to working with hospice assistant Amy Duncan when they learned that his last wish was to live long enough to see Rogue One: A Star Wars Story. Thus began the #RogueOneWish campaign, which spread through social media platforms like Twitter and Facebook to get the attention of Disney.

The good news is that Neil Hanvey got to see the movie a few days ago:

On behalf of Neil Hanvey, his wife Andrea and all his family, we want to thank everyone who supported the #RogueOneWish campaign. The director of Rogue One, Gareth Edwards did all he could to make Saturday a very special day for Neil. Neil, his family and everyone at St Michael’s Hospice would like to say thank you to Disney, Lucasfilm and especially Gareth Edwards.

However, he passed on shortly after seeing footage from the film:

A message from Neil Hanvey’s wife, Andrea. ‘On behalf of all our family we would like to thank everyone who has passed on their condolences following Neil’s death last night. We would also like to thank the tens of thousands of people who supported the #RogueOneWish campaign. All the messages of love during the past week have given us a great deal of comfort during a very difficult time. We would also like to thank everyone at St Michael’s Hospice, especially Amy Duncan, without who #RogueOneWish would not have happened. All donations at Neil’s funeral will go to the Hospice’s Family Support team and will be used to fund work with children and young people. An online donation page will be set-up shortly.’

#RogueOneWish was supported by many Star Wars fans –  with a few notable examples of good will including Mark Hamill retweeting a prominent Twitter message (vastly spreading the outreach of the campaign), colleagues of the Hanvey family promoting the campaign while wearing Stormtrooper masks, and a choir coming up to his room to sing the Star Wars theme.

While his life was tragically cut short by illness, we should at least be happy that Neil Hanvey got his dying wish. May he rest in peace. Our condolences go to his loved ones.