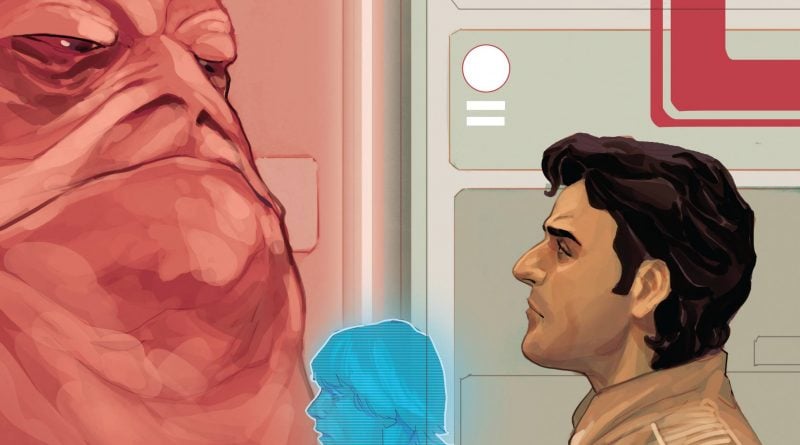 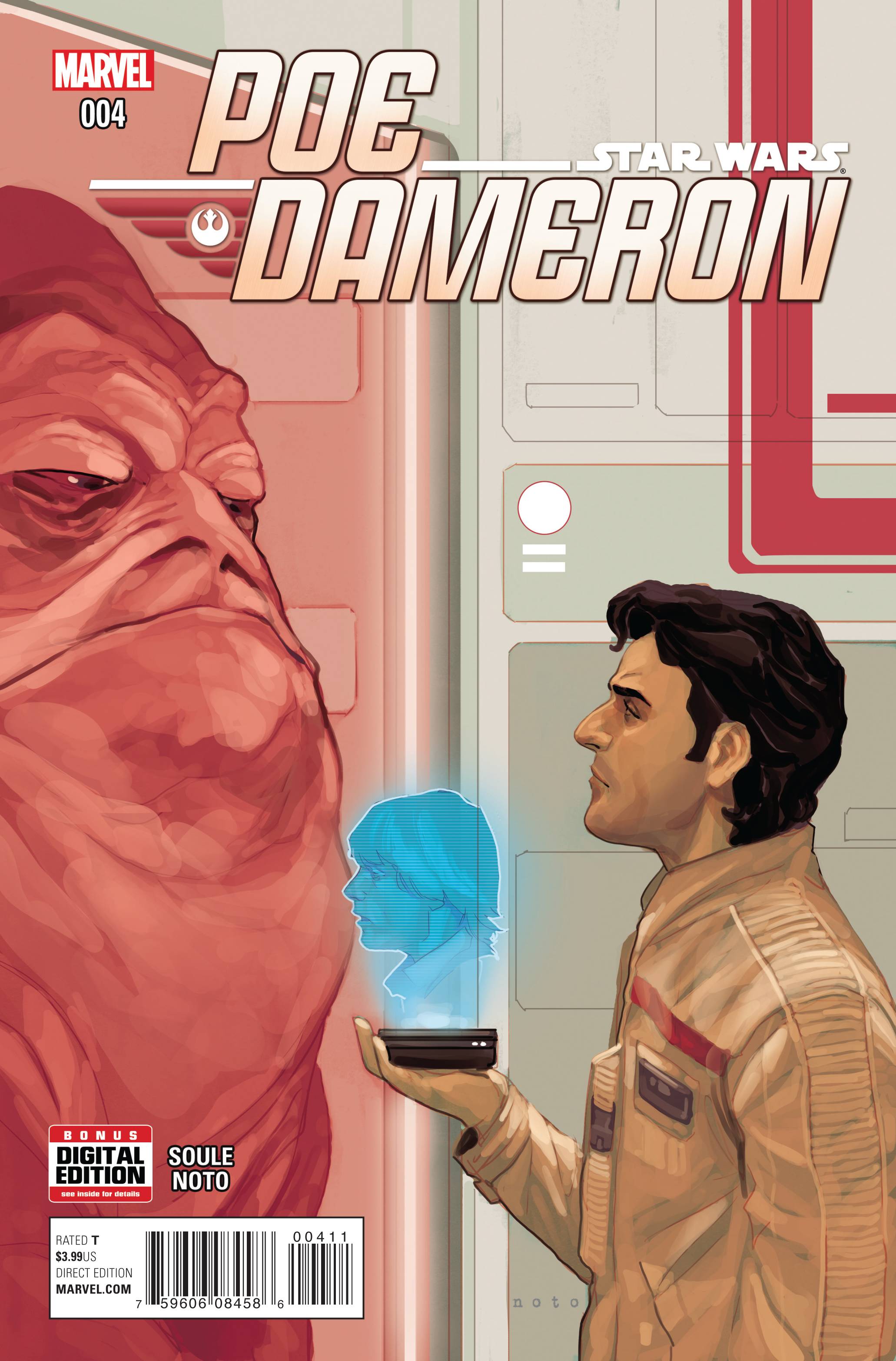 The adventures of Poe Dameron and the Black Squadron continue.  If you’ve been wondering how the search for Luke Skywalker was going before the beginning of The Force Awakens, writer Charles Soule has been doing a fantastic job telling a story that not only adds to the search for Skywalker, but also establishes the tense state of relations between the First Order and the Resistance.  SPOILERS AHEAD…. 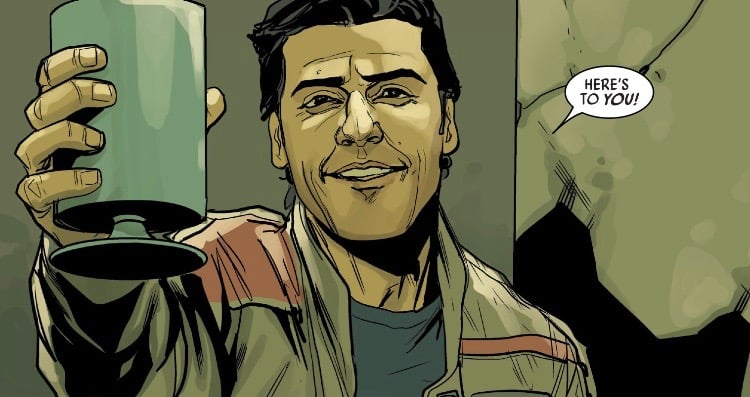 Well, it didn’t take long for Poe and company to break into the stash of Corellian Ale or Port of Storm (shoutout to you Bloodline readers) upon their return to D’Qar.  The pilots managed to escape a pretty serious encounter with the First Order and rising star Agent Terex, so there’s good reason for these folks to kick off their flight gear and enjoy a few stiff drinks.  As they imbibe, inhibitions are cast aside, and we get to see the interrelationships among the members of the Resistance’s best squad. 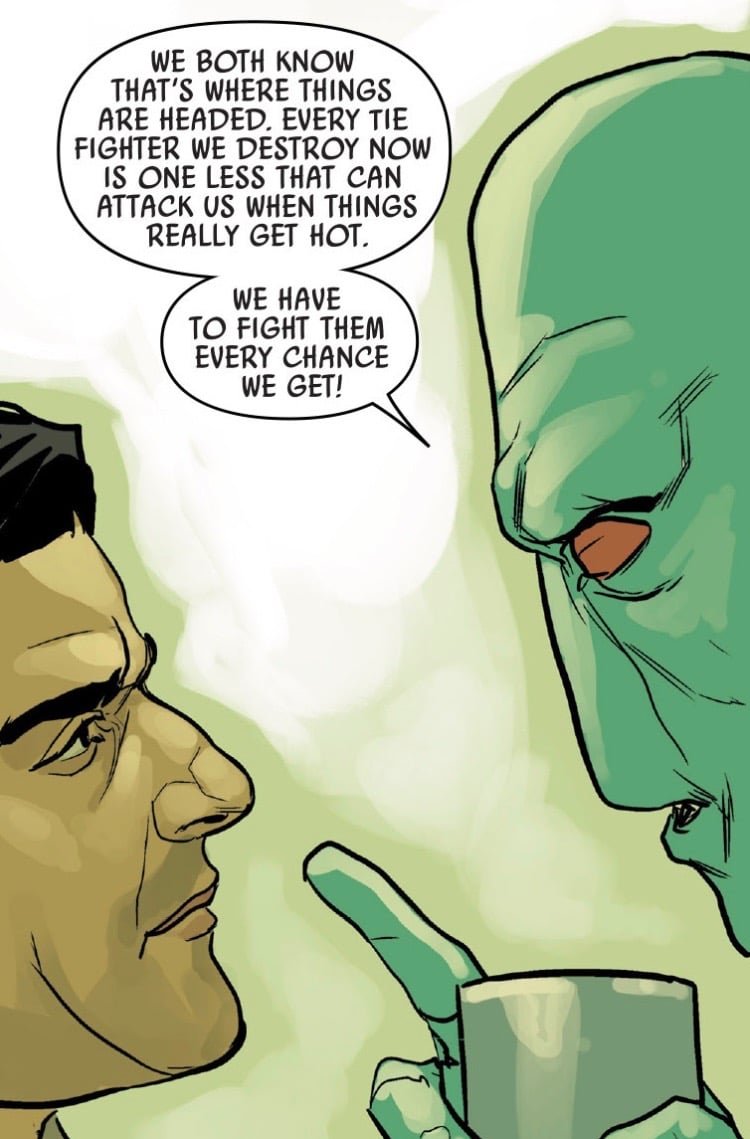 It was pretty clear the moment Poe was forcefully knelt down in front of a looming Kylo Ren, and greeted the imposing figure with a few jabs about his garb and who should speak first…Poe had been waiting for a confrontation with the First Order for a while.  His discussion with L’ulo, veteran pilot of the Rebellion who fought with Poe’s mother, highlights the frustration Poe feels as the Resistance is still held back by Republic conventions of engagement.  L’ulo lets Poe know it’s not crazy to feel that way.  The conflict between the Empire and the Rebellion is almost mythical to those who weren’t around to see it, but figures like Leia and L’ulo who saw the relentless mandate of the Emperor’s quest for total control, know exactly what the First Order is about.  L’ulo broke the orders that the Resistance fighters could not engage First Order soldiers unless fired upon first.  As you see, L’ulo had his reasons for doing so.  Poe gets it, and it didn’t take a hangar full of TIE Fighters on a Star Destroyer to convince him. 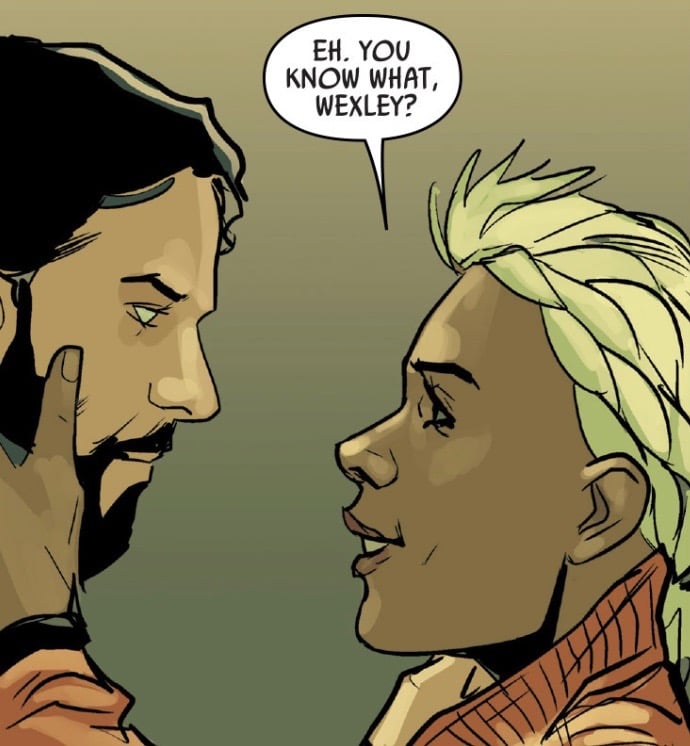 Kare’ Kun and Snap Wexley seem to have found a new dimension to their relationship.  If you remember, Wexley also has roots in the Rebel Alliance.  Both of his parents were part of the Rebellion and their story is still ongoing in Chuck Wendig’s Aftermath novels.  The bond created between their near death experience deepened. 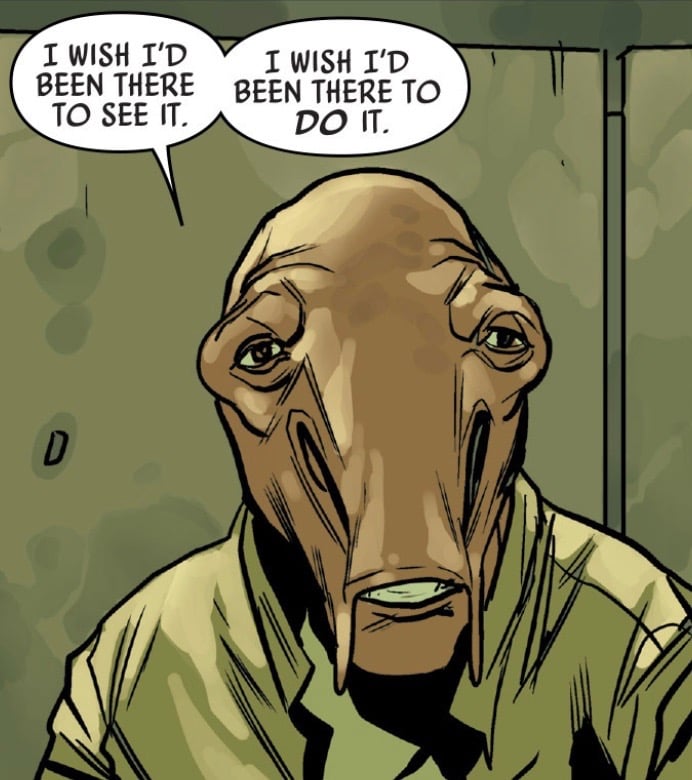 Odds hopes to get his shot some day, too.  We’re rooting for you, big fella.  Almost as soon as the party starts, Poe is ready to discuss where the clues they found will take them next, to a planet called Megalox Beta. 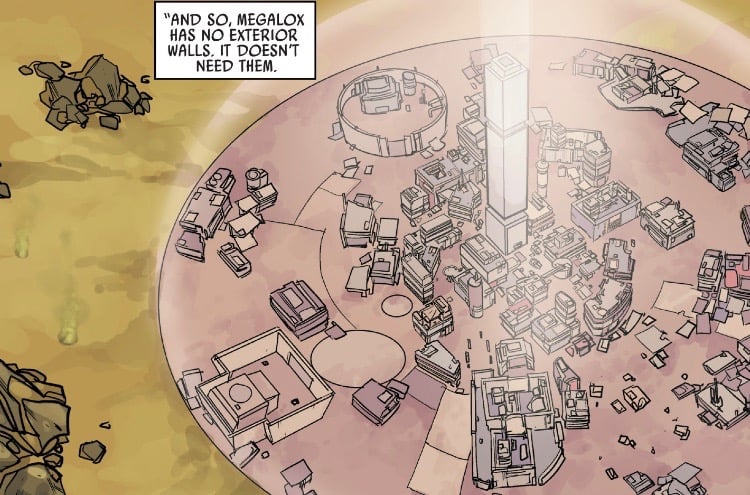 Megalox is not just a clever name, it’s the toughest prison in the galaxy, run entirely by a private firm.  Poe is seeking out a Hutt, one we’ve met before, named Grakkus.  You remember Grakkus the Hutt from the Showdown on the Smuggler’s Moon arc of the titular Star Wars issues #8–12.  Remember, the one who collects Jedi artifacts and pit Luke Skywalker against a rancor.  Poe and squad have arranged a meeting on the planet prison, which is entirely on lockdown via a forcefield that protects prisoners from the planet’s intense gravity.  Poe and company agree to ride along on a supply ship landing in the prison, leaving behind their ships.  You heard that right, they are going into the deadliest prison in the galaxy without their ships, just a few blasters.  What could go wrong?

Poe and Black Squadron were double-crossed at the last minute by some guards paid to let the locals do them in.  Luckily, it’s the Black Squadron, who are just as capable of managing blasters as they are X-Wing cannons.  After a few canisters of noxious gas and blaster bolts, the crew is on their way to finding Grakkus. 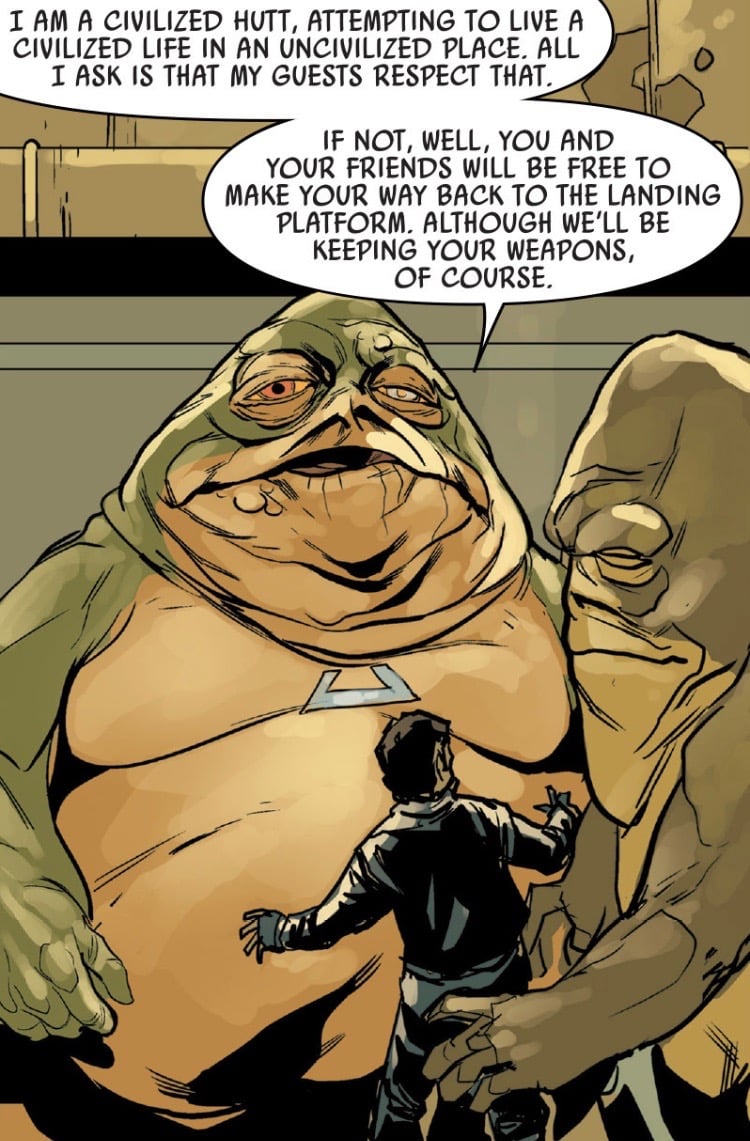 Grakkus is just as bloated and unusually large as remembered.  He has a few of his other Hutt buddies there, tattooed and equipped with cyborg, centipede-like legs.  Grakkus seems to have softened in his older age.  He makes Poe promise not to cause trouble for the Hutt by causing damage or ruckus.  It’s kind of a funny moment, when we all know what the elaborate fights Grakkus staged a little over three decades ago.  Grakkus leads Poe through his home.  Keep your eyes peeled, among a few of the decorations you will certainly recognize one.  They reach the end of their short walk to find Poe was not the first visitor Grakkus received. 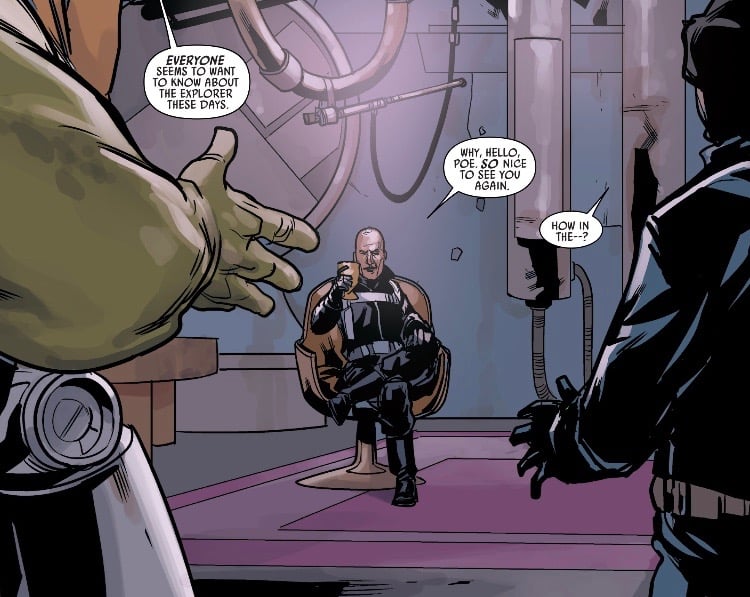 Agent Terex found his way to Megalox.  The proposition is a simple one from Grakkus:  first one to break him out of Megalox will be told the same information Lor San Tekka received.  That’s pretty vague, but I’m certainly intrigued to hear what Grakkus knows about Luke Skywalker’s exodus.  It’s a lot to hope for and we should probably keep expectations in check, but it would also be interesting if the Hutt had any insight as to why Tekka made his way to Jakku, considering the other Force-sensitive person residing there waiting for her family.

Great issue!  Phil Noto’s artwork always steals the show.  There is so much going on in each frame.  I also liked how the scope of the story went from intimate to grand and then back to intimate.  The concept for the prison is pretty cool, too, especially since we comic readers just left a well conceived prison in the Rebel Jail.  This new arc is called Lockdown, and we are at the beginning.  Head on down to your comic shop and get this now! 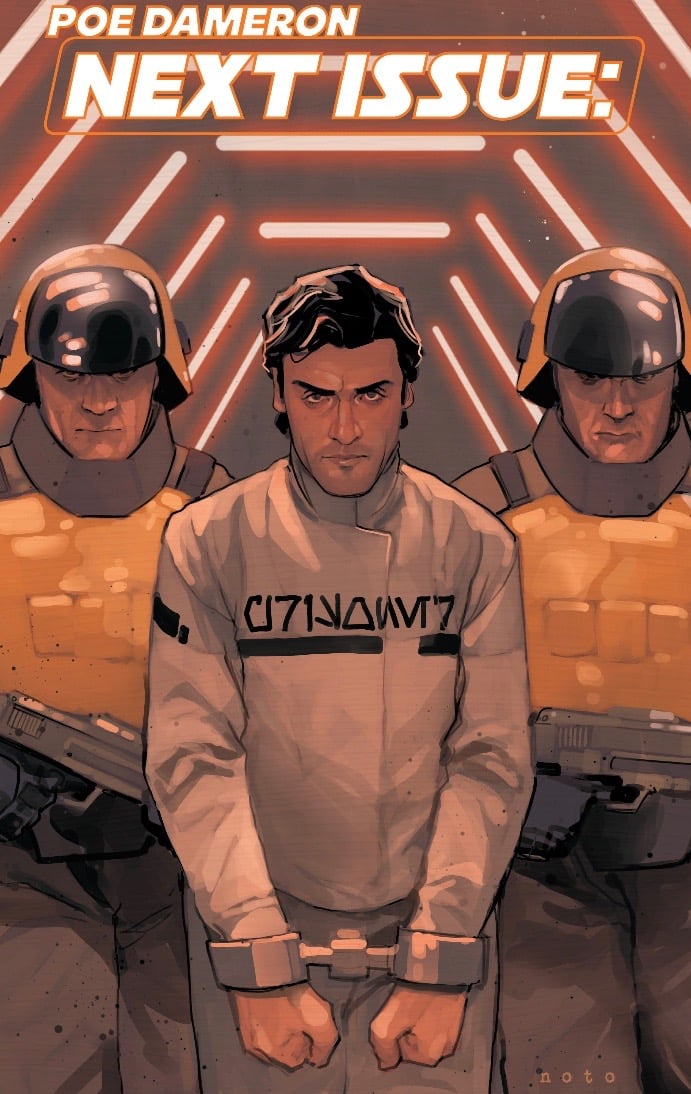 Pick this issue up at your local comic shop or digitally from comiXology! 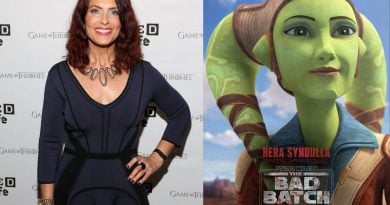 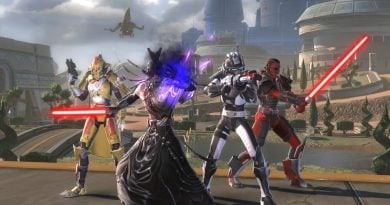