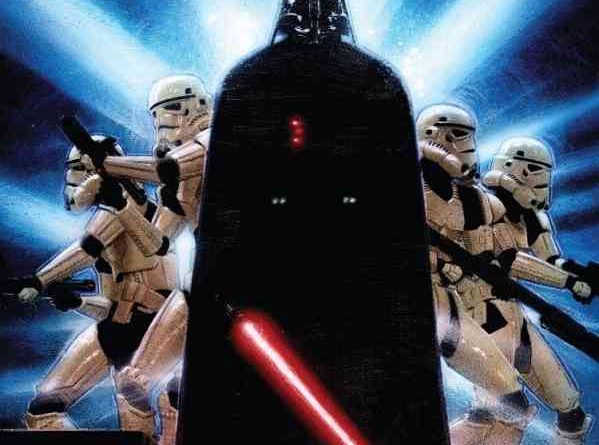 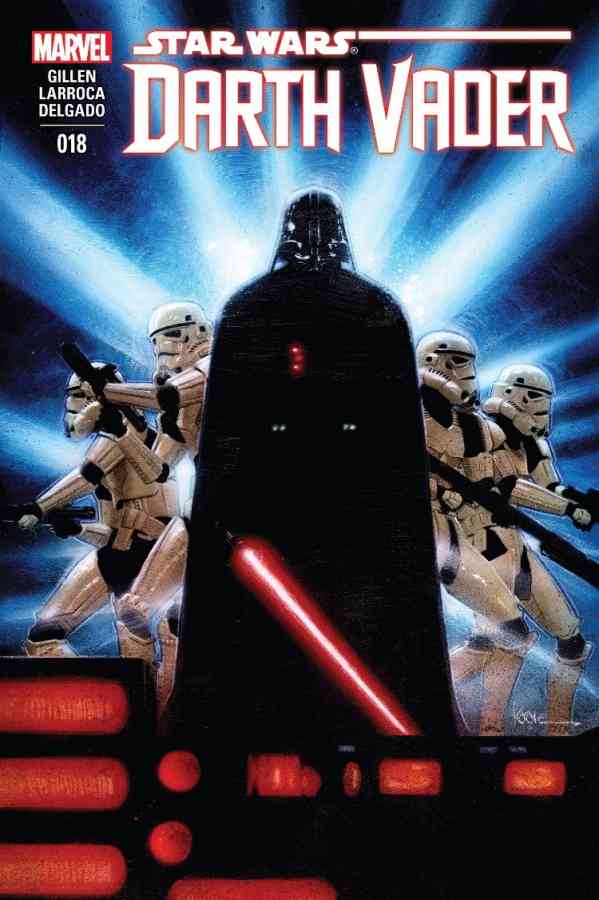 This week, we rejoin Vader on the midst of the Shu-Torun War.  The planet Shu-Torun is in the midst of an Imperial backed coup.  Rife with ore the Empire needs to fortify itself in the ongoing galactic war with the Rebel Alliance, Vader continues to work with the young Queen Trios, bringing the troubled planet back into the fold.  SPOILERS AHEAD…

Issue #18 is pretty good, but the story jumps all over the place, so go in being prepared to rack your brain a couple of times.  It’s a strange turning point in the story writer Kieron Gillen seems to be at.  I had to read the issue a couple of times before sitting down to write this, as well as go back and look at the previous ones.  No one ever said establishing puppet governments to rule over resource rich planets was supposed to be straight forward.

The opening pages depict Bee Tee and Triple Zero recounting all the fun they’ve been having during the carnage.  If you recall, Vader has dispatched a murder of bounty hunters to track down Doctor Aphra.  The corpse the two droids dispose of in the frame above is that of one that presented a false pile of disintegrated remains to Vader, claiming it was Aphra. 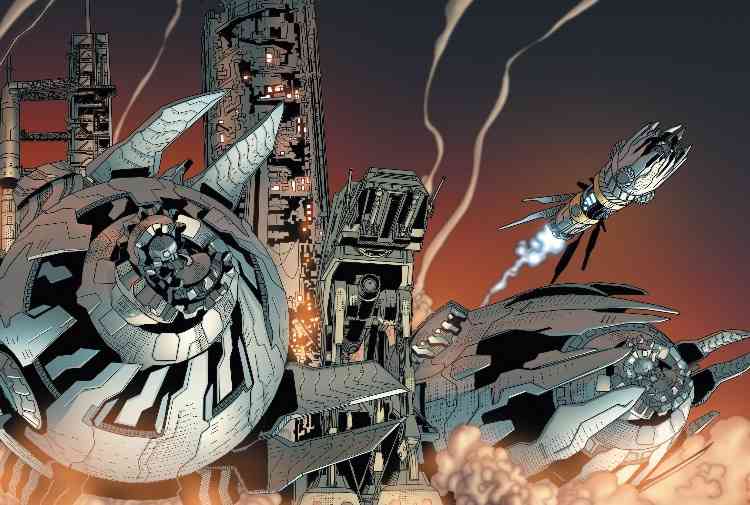 After the impromptu funeral murderous droid style, we rejoin Vader in command of an awesome looking fleet of drill-like ships.  Much of the fighting so far in the Sho-Torun War has been in the mines of the planet, the reason the Empire is there causing trouble in the first place. 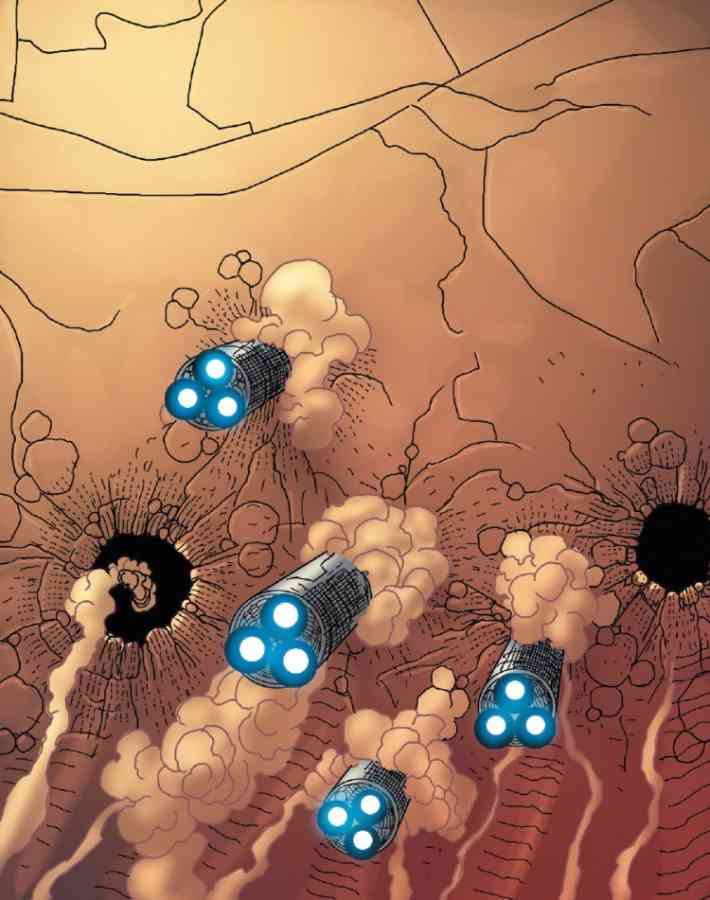 What Vader and company are after is access to a citadel belonging to Baron Rubix.  Make sure to keep track of names here, because at this point I was feeling a bit lost.  Cylo is also leading an attack, and as Vader’s ship goes off course due to a malfunction, we begin to see what the sneaky cyborg has planned for Vader and his battalion of stormtroopers. 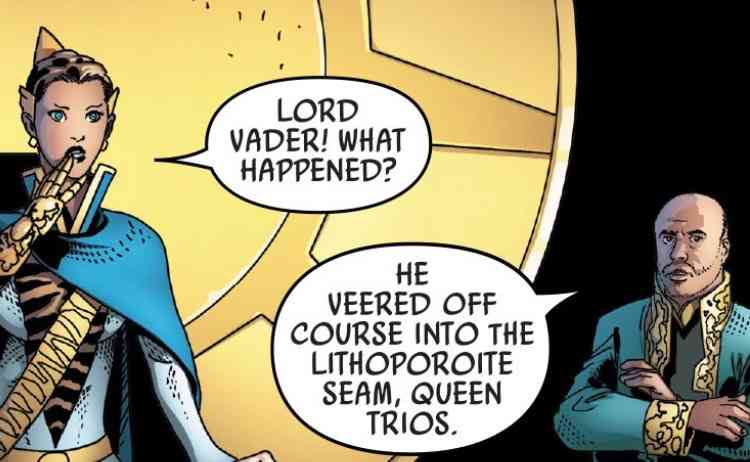 Queen Trios and Chancellor Jooli are watching all of this unfold.  Vader’s ship has been diverted to a perilous course.  This is great cause for concern.  Trios and the Empire are now strange bedfellows.  In my opinion, at least in this point of the story, Trios saw this agreement with Vader and the Imperial forces as the lesser of two evils.  We’ve seen certain administrators of certain floating cities make the same mistake.  Trios knows if this attack falls apart the Empire will simply take what they want and not be so concerned about civilian casualties.  Trios is at a crossroads, but she doesn’t yet know it.

If there’s one thing this Darth Vader comic has taught us it’s that the Dark Lord does not mind getting his hands dirty.  This issue is no exception to that disposition. These strange looking soldiers of Shu-Torun (for some reason it reminded me of The Fifth Element…anyone?).  The Shu-Torun soldiers outnumber Vader and his troopers by significant measures, and we also see that Imperial Troopers are much more reluctant to dive into potentially impossible battles, unlike their predecessors of the Republic.  You might forget, none of them saw Vader single handily dismantle an entire Rebel squadron of fighters in the Vader Down arc.  Vader’s not one to brag, so I guess they’ll have to settle for a demonstration.

Triple Zero and Bee Tee brought their friends.  You may remember them from the Clone Wars, you may also remember them from previous Darth Vader arcs, as he’s been secretly building an army of his own.  I assumed that Vader would reserve this army for a bigger assault, maybe one on ole’ Sheev Palpatine, so I was puzzled why Vader would choose to use them here.  My only guess is he’s playing the long game, and he wants the Empire he assumes he will inherit to be as strong as it can be.  Shu-Torun is an asset Vader feels he needs to protect.

That didn’t take long.  Here’s a closer look at an unfortunate, local soldier of Shu-Torun.  Vader managed to deplete all of Baron Rubix’s guards.  Wait for it….IT’S A TRAP!!!

Vader decides he’s had enough of this nonsense.  He’s taking his lightsaber, those weird cyborg twins (I’ll get to them in a minute), and going for broke.  Triple Zero has an interesting proposal of using blood from the casualties to power the droids and the drill ships.  Triple Zero is ambitious, but Vader shoots him down.  Hmmm…I’m thinking if they laid out the plan in that much detail that Triple Zero’s disobedience protocols are about to kick in.

Meanwhile, above ground, the queen discovers her chancellor has betrayed her.  This is the crossroads I mentioned.  I’m very intrigued to see where her story goes from here.  I won’t ruin the what she decides to do about the chancellor’s betrayal, but keep an eye on her.  Queen Trios definitely steals the show in this issue.  She is the one here with the most inner turmoil and trying to come to grips with the fact she may be in way over her head.  The foundations of her world are literally crumbling away, and the queen must figure out a way to protect whatever is left.  We will see. 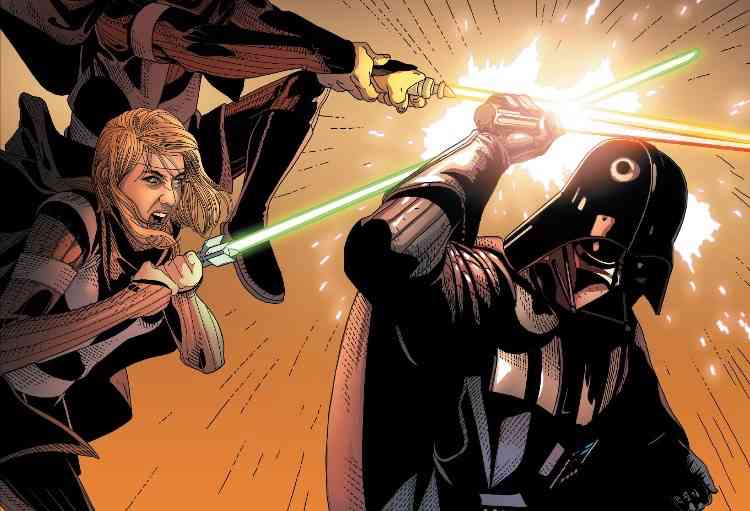 Oh yeah, there’s those creepy twins.  They’ve been with Vader the entire time, watching him head into battle and then handily avoid a massacre.  As they make their way deeper into the planet’s caverns they end up in a lava cave.  Of course, it wouldn’t be a good duel without a lava cave.  The beginning of this fight brings issue #18 to a close.

Good issue, but I felt as soon as it got going it was over.  That’s life in comic books, but sometimes it’s hard to accept.  I wish the Gillen would not have tried to cram so much into this book.  I felt very distracted at times, having to flip back pages and even issues.  Maybe that’s just me.  That’s my only gripe, though.  Other than some of the plot lines wandering, I very much enjoyed the action.  The artistic duo of Salvador Larroca and Edgar Delgado continue their work, great as always.  There are a lot of BIG moments in this issue, and the art certainly delivers the weight of the events.  The cover by Mark Brooks is excellent, as well.

Beyond the action, I’m also enjoying watching the minutia of intergalactic politics go down.  We have to imagine this kind of thing happened on several worlds the Empire tried to plant flags on.  I’m guessing that number dwindled as soon as they demonstrated the Death Star on Alderaan, but it’s not like everyone signed up.  What I’m trying to say is it’s interesting to watch the combination of diplomacy and military action unfold on a planet the Empire seems to badly need.  I’m not optimistic about the fate of Shu-Torun, but I’ll certainly be paying attention. 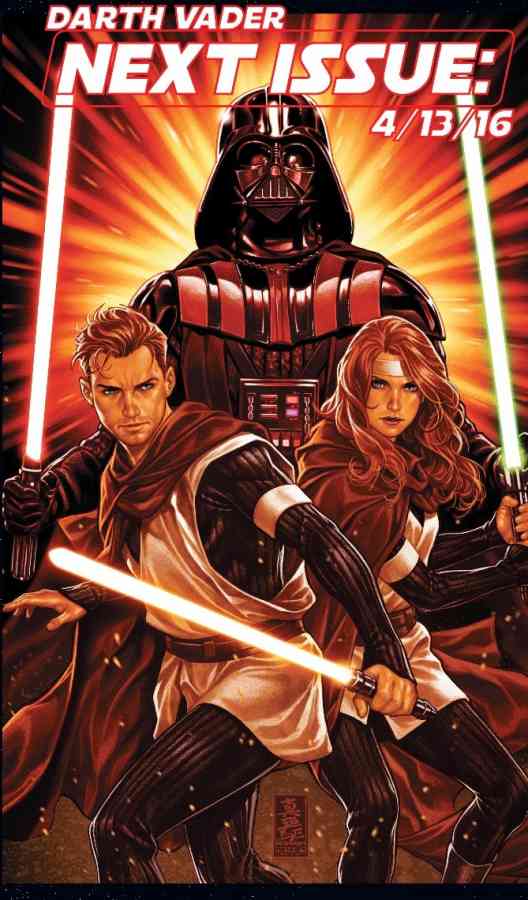 You can purchase this issue at your local comic shop or a digital copy through comiXology. 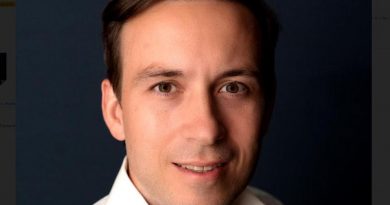 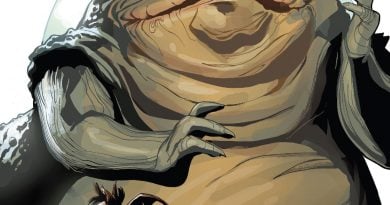 Review – Hutts Ruin Everything In Marvel’s Age of Rebellion: Jabba the Hutt 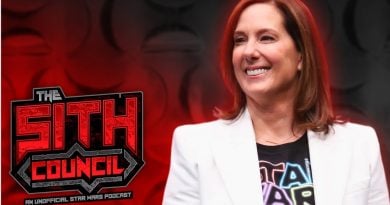