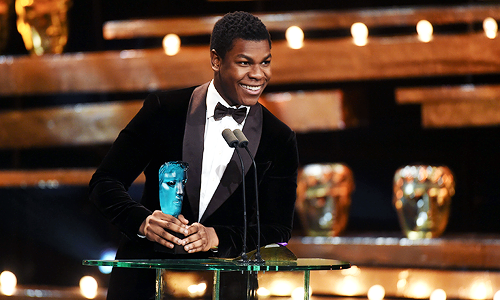 John Boyega is really a man hard at work. Tonight he attended the British Academy Film Awards where he won the EE Rising Star Award, and tomorrow (February 15) he will start working on Star Wars: Episode VIII at 6 am (UK time).

Boyega revealed his schedule speaking on the red carpet ahead of the actual event that took place at London’s Royal Opera House.

Boyega won the award in a direct competition with Kingsman: The Secret Service’s Taron Egerton and Fifty Shades Of Grey’s Dakota Johnson.

So from the 5 nomination TFA won the 2 most important. Congrats John, you definitely deserve that one.

Anthony Daniels confirms that the Episode VIII cast and crew are having a meeting early tomorrow:

Heartfelt congratulations to you John for winning BAFTA's RISING STAR AWARD tonight but we've an early call tomorrow so easy on the champoo!

And here’s Boyega’s acceptance speech, plus an interview with the guys behind the Special Effects from TFA.