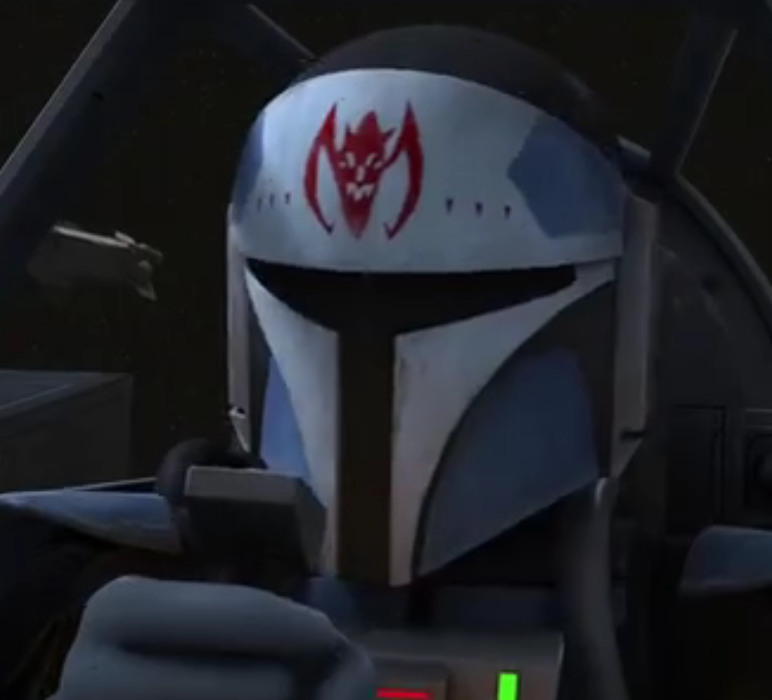 A recurring theme this season has been getting more backstory in small trickles on the rebel crew of the Ghost. This week it was Sabine’s turn. We’d already gotten a bit on her earlier in the season, namely her past as a bounty hunter (this seems to be a thing for Mandalorians). During this episode, we learned more about her Mandalorian roots, albeit just a touch, as well as some insight into Mandalore’s place in the galaxy under Imperial control. Hit the jump for more and beware of SPOILERS …

We start off with the Ghost just returning to join up with the rest of Phoenix fleet after a successful supply run. Though the crew accomplished their mission, they were forced into a longer journey in order to avoid Imperial ships that have been making travel difficult in the Outer Rim.

During a debriefing on board the flagship, Commander Sato deems it necessary for the fleet to seek out alternative hyperspace routes into the Lothal Sector. Sabine brings up the Concord Dawn system, a Mandalorian Colony, as a possible shortcut. Mandalore itself is occupied by the Empire, however Sabine mentions that this may not be the case for the Mandalorians here, known as the Protectors. It seems these Mandalorians were already at odds with the ones in power during the last days of the Republic and had a habit of doing things their own way. 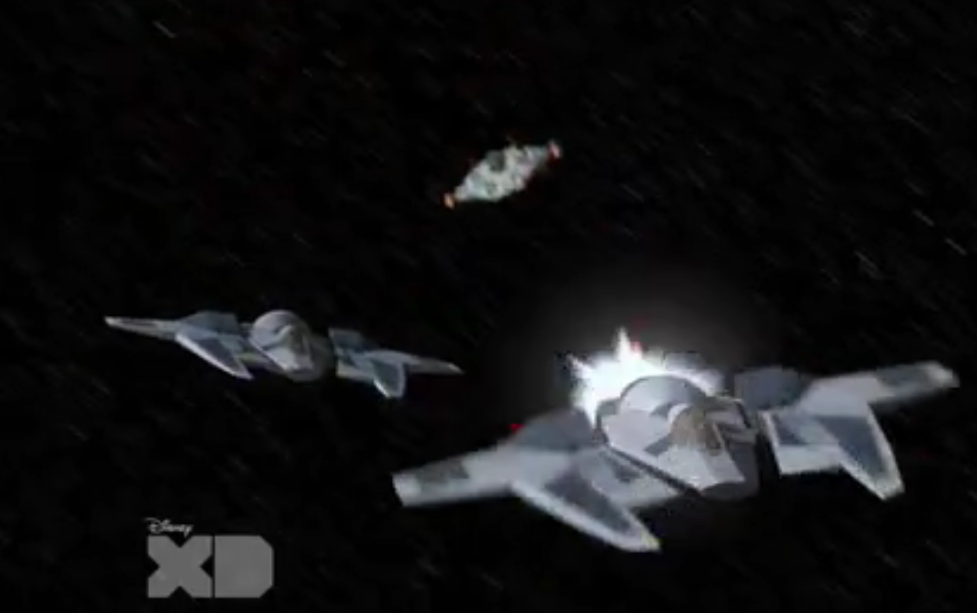 Rex mentions knowing their leader, Fenn Rau. He used to be a flight instructor for the Grand Army of the Republic, training pilots in the Clone Wars, in addition to playing a key role in the Battle of Mygeeto. A debate ensues on the merits of either approaching the Mandalorians of Concord Dawn with diplomacy or a display of military might. It’s agreed that Hera and Sabine will take Phoenix Squadron into the sector with the hope of gaining permission to fly through their space and perhaps eventually recruiting the Protectors to the rebel cause.

Upon arrival in the Mandalorian colony’s space, Hera and company are greeted by a squadron of Mandalorian fighters. After announcing herself as part of the group of rebels waging war on the Empire, the squad of A-Wings are fired upon. Fenn Rau states that in this sector, he does the Empire’s work. The rebel group takes a heavy amount of punishment, losing some fighters before Hera orders a retreat. She is able to give the rest of the squadron enough cover to escape destruction, sustaining massive damage just before fleeing into hyperspace. 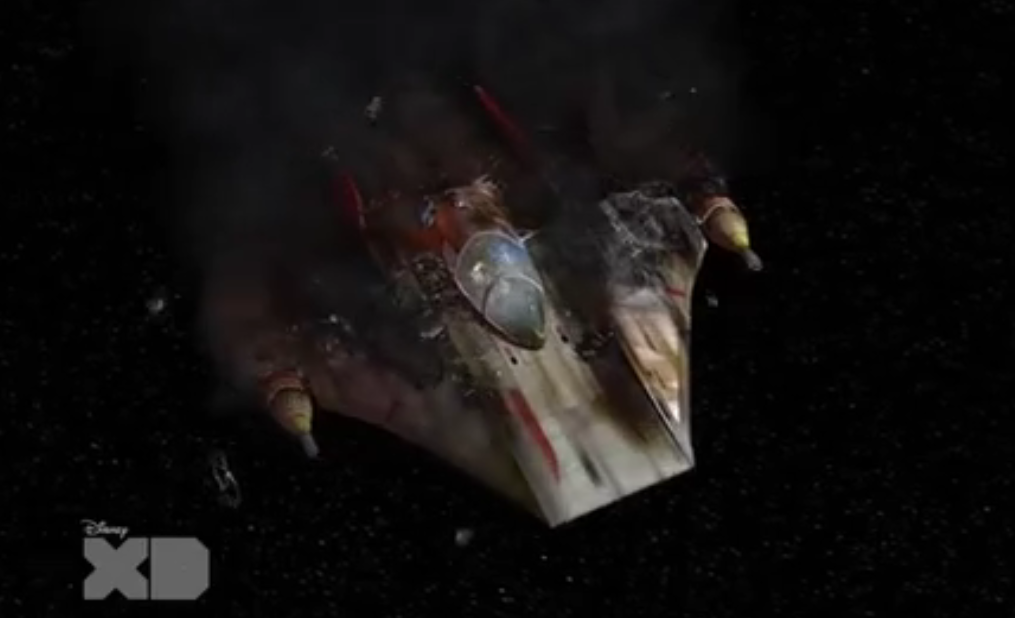 Back with the fleet, Hera is in serious, but stable condition. Sabine is understandably furious and is foaming at the mouth for revenge. However, Kanan refuses to put anybody else of the crew at risk (with the exception of Chopper), opting to go on a solo mission to take care of the Mandalorian fighters. Sabine ends up stowing away on the ship. Kanan has other ideas than simply destroying the Protector squadron. He still believes he can use diplomacy to complete Hera’s mission, possibly bringing these Mandalorians into the fold. Sabine has little faith in this plan, yet begrudgingly agrees to follow it.

Upon arrival at the third moon of the system, Kanan and Sabine witness an Imperial shuttle stop at the moon, making a payment to Fenn Rau, ensuring the Protectors’ support of their interests. Rau informs an officer that he encountered a small rebel squadron and agrees to report in should they turn up again. After the Imperials leave, Kanan tells Sabine to get charges planted on the fighters, but to wait for his go ahead before actually setting them off. 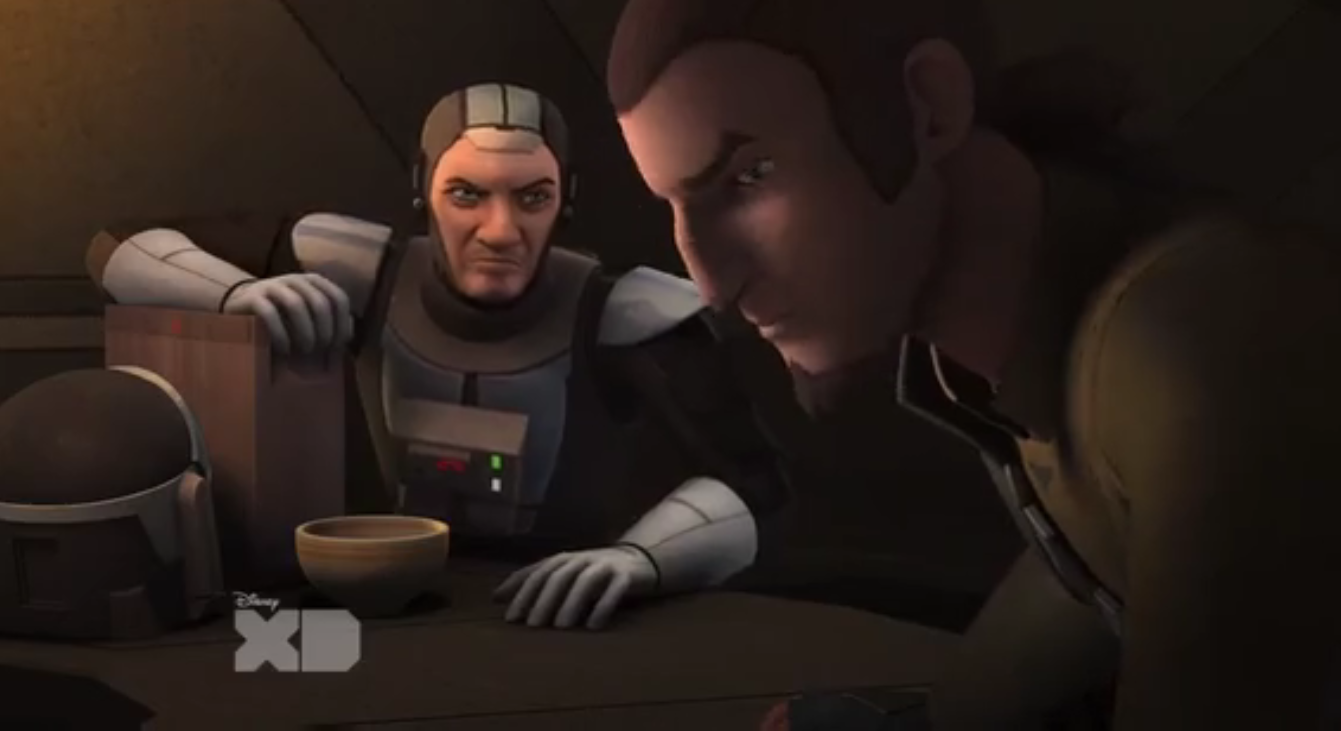 Believing that diplomacy and ally-making are still the best course of action, Kanan heads off to palaver with Fenn Rau. Here, we get a nice call back to the Kanan comic released earlier on the same day as this episode aired. Kanan remembers Rau, who bailed him out, along with Master Depa Billaba and a battalion of clone troopers from a horde of battle droids, during the Battle of Mygeeto. Though some of Kanan’s points seem to touch a soft spot in Rau’s heart, the Mandalorian Protector refuses any kind of an alliance.

Meanwhile, ignoring Kanan’s request, Sabine reveals herself to several Mandalorians, announcing her status as a member of Clan Wren, House Visla. She then invokes their society’s code of justice via single combat, in order to avenge the attack on Hera and Phoneix squadron. 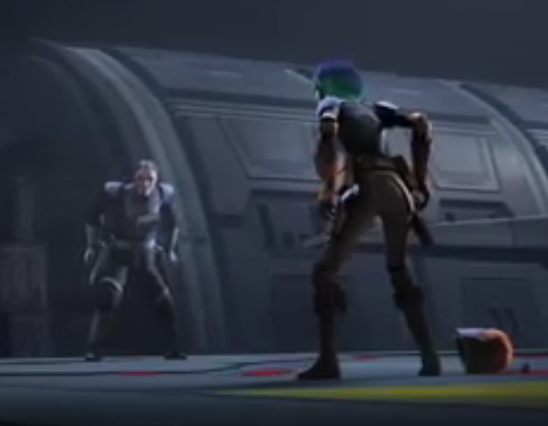 Sabine defeats Rau in an old-fashioned, western-style quick draw duel. After shooting the guns out of Rau’s hand, she sets off the charges, destroying the majority of the Protectors’ ships. Rau’s fighter is still intact however and he nearly manages to escape. Kanan has other thoughts and is able to leap onto the vessel, hanging on for dear life, before disabling the ship with his lightsaber. The Phantom swings by, making a successful pick up of both Jedi and Mandalorian leader.

Rau reluctantly agrees to allow the rebels passage through the Concord Dawn system, stating that the only reason they are “allies” is out of necessity. It appears that while he may not truly believe in the rebels’ chances of defeating the Imperials, he has no love for the Empire and doesn’t want to see their increased presence in Concord Dawn. 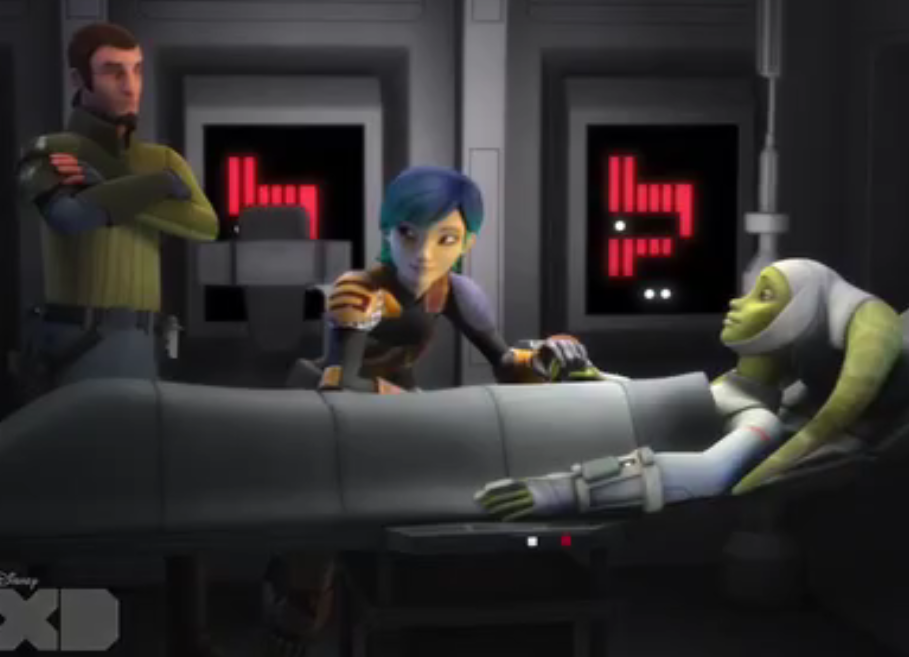 Sabine then has a touching moment with a recovering Hera. She mentions that they made the right choice not killing the Protectors as they are not at war with them. Hera remarks that she’s now thinking more like a Jedi than a Mandalorian and Sabine owes that to her rebel family raising her well.

Okay, maybe not galore, but it was really cool to get some updated info on what the Mandalorians have been up to since the rise of the Empire. We only got to get a glimpse into a rogue sect, yet it was still satisfying. The helmeted and armored warriors of Mandalore had a very rich backstory in the old EU. Though the canon wipe has left a lot of this up in the air, we still had a lot established canonically via The Clone Wars. They have an interesting society that once centered on a warrior-like nature before trying to change their ways in the days of the Republic. Mandalore as a society continued to slip closer and closer into a state of all out civil war in the waning days of Republic. Despite this, one thing was always clear. Namely, that they wanted to remain independent of the Republic. One can only imagine their reaction to the Empire’s dominance of the galaxy. 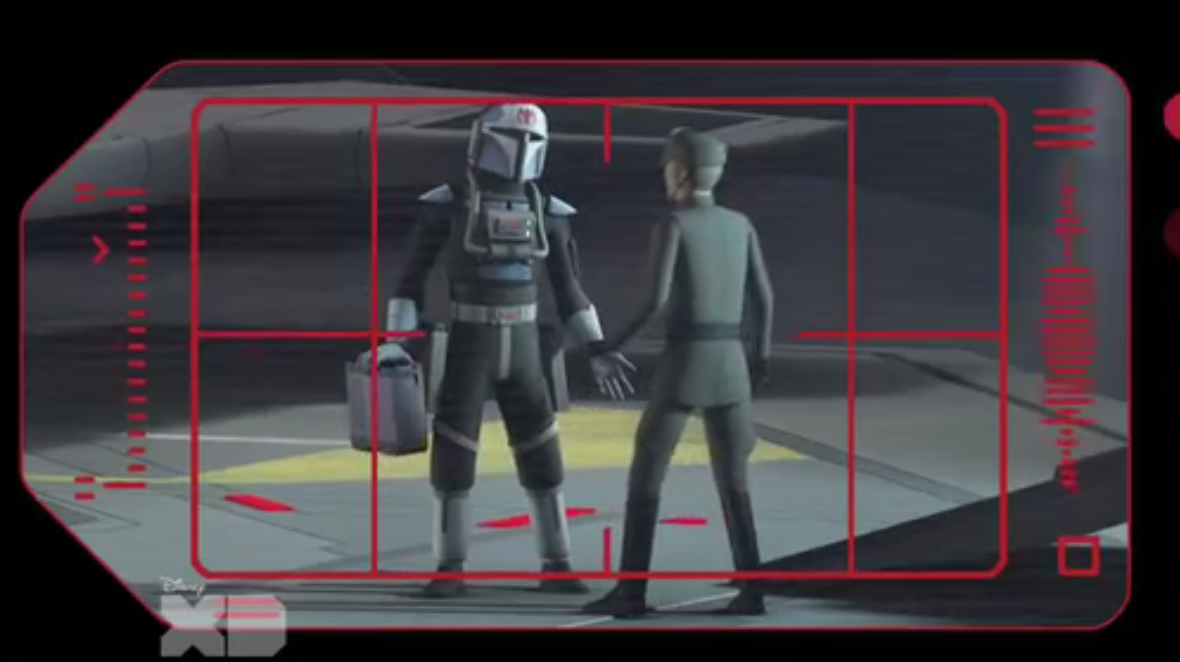 I’m looking forward to learning more about their history and culture, as well as possible insurrection against their Imperial occupiers.

We got another nice connection between stories in the GFFA here, highlighting the Lucasfilm Story Group’s dedication to a unified story in the Star Wars universe. Those who are fans of the soon-to-be-finished Kanan: The Last Padawan comic will surely recognize that Fenn Rau appeared in the issue released just several hours before Rebels aired. In the comic, Rau helped a young Kanan out during the battle of Mygeeto. Sure, it’s not as though we got a clue to the Knights of Ren. Still, it’s both a nice nod to those who are really dedicated to consuming all the media formats of the canon, in addition to showing that these kinds of references can be made without alienating those that don’t. 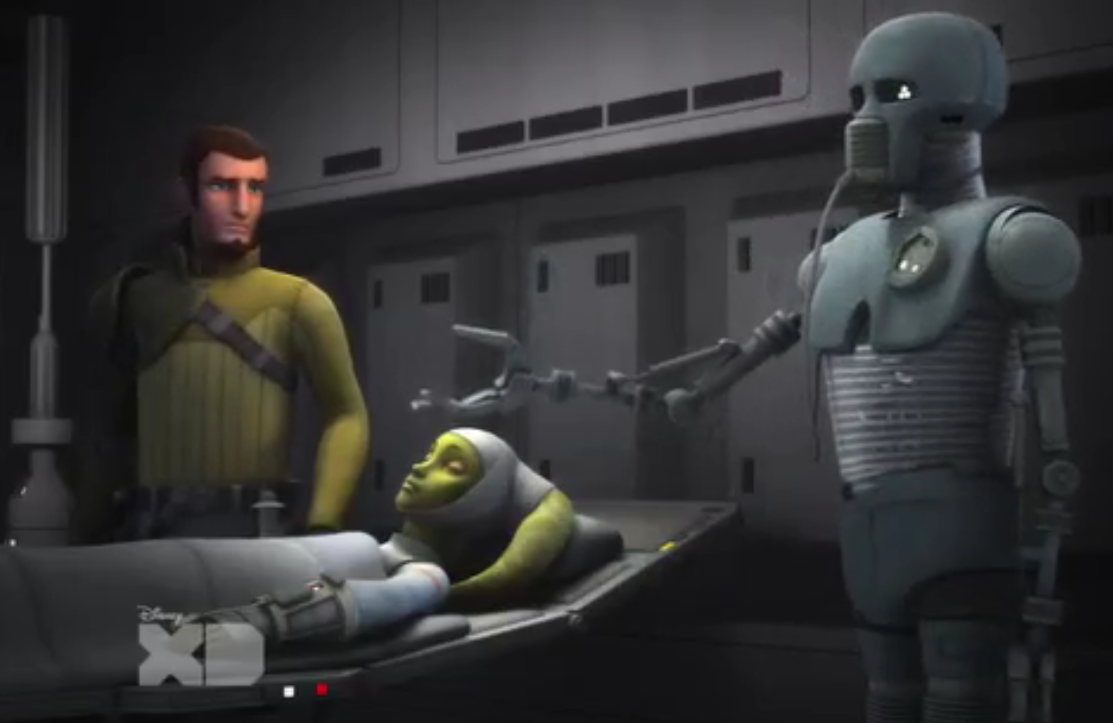 The pacing of this one was fantastic. High octane action sequences were broken up by brief moments allowing the viewer to catch their collective breaths. Who doesn’t love seeing A-Wings in action and also getting an old-fashioned, western-style shootout? 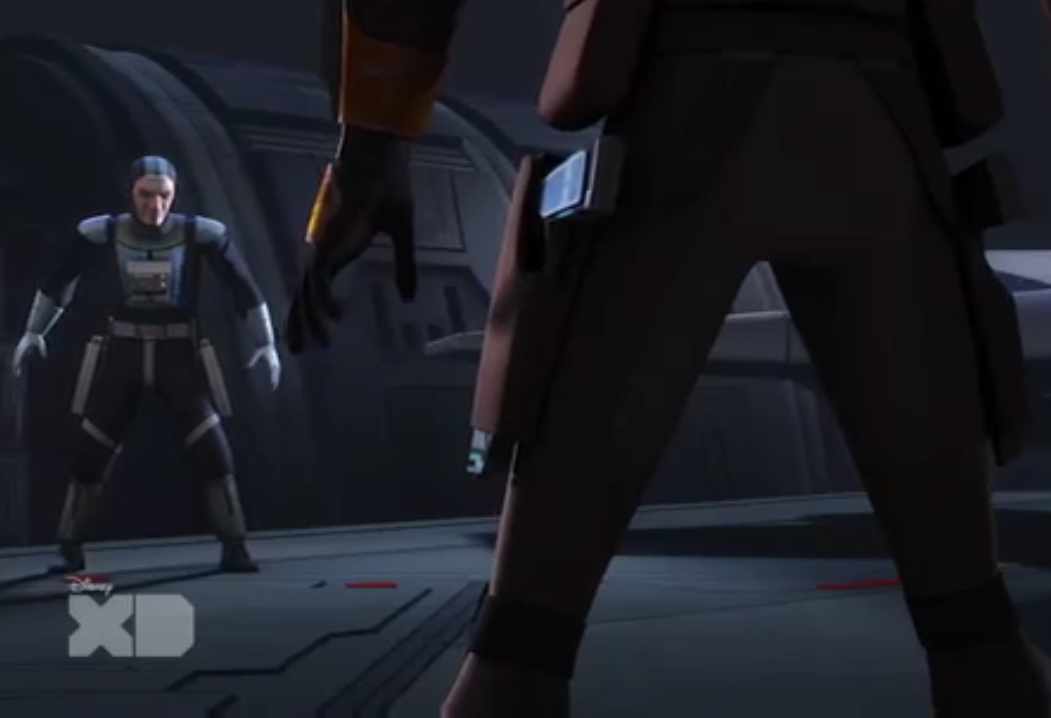 While I loved the action in this one, I found the fact that Kanan was able to hang onto a fighter going at full speed and pushing for the stratosphere, to be at least a tad bit on the ridiculous side. Even with the Force as assistance, Kanan should have been thrown off almost immediately. Still, it’s only a minor gripe in an otherwise fantastic episode. 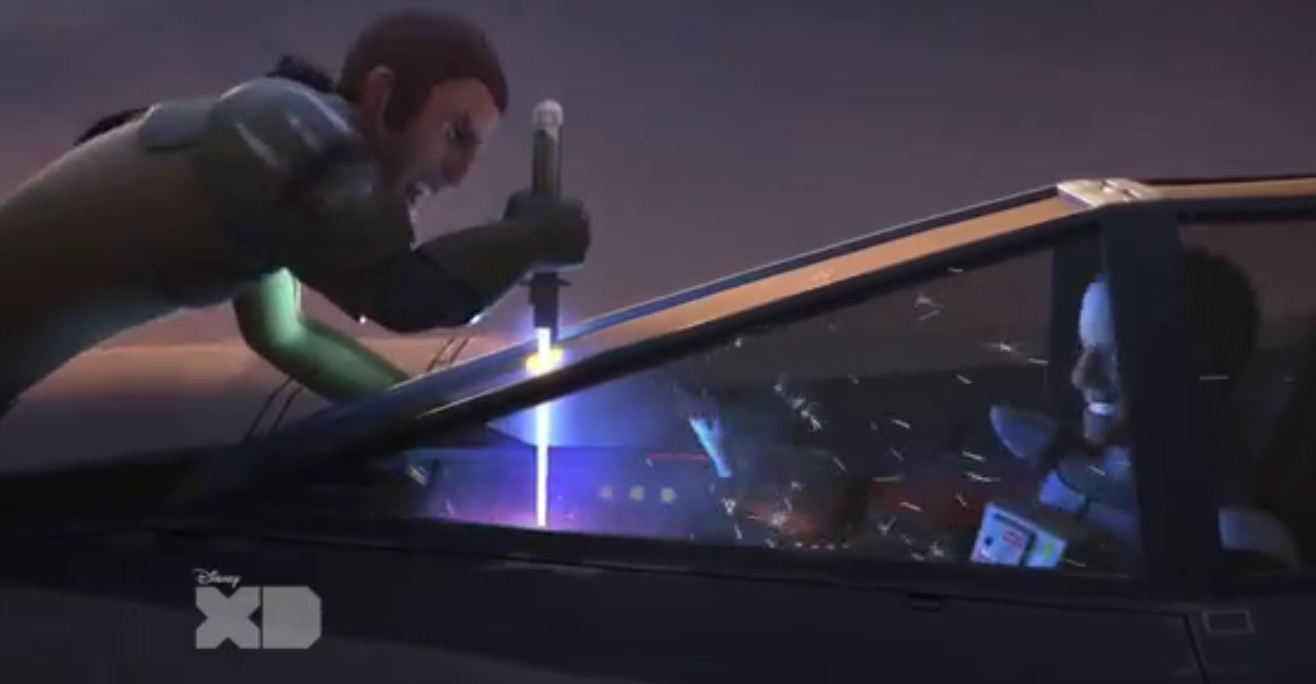 Star Wars doesn’t have to be dark to be good. That being said, I think it’s stories are at their best when they balance lighter, humorous themes alongside darker ones (much like the Force in balance, I suppose). This episode actually saw some A-Wing pilots getting killed in action. I’m not trying to sound morbid and say we need more deaths, however it does raise the stakes for our heroes when we feel like they are vulnerable.

I like that we aren’t just being shovel-fed the character’s backstories in large chunks. The little bit at a time approach is working for the time being. We are being given just enough to satisfy us, while still wanting more. 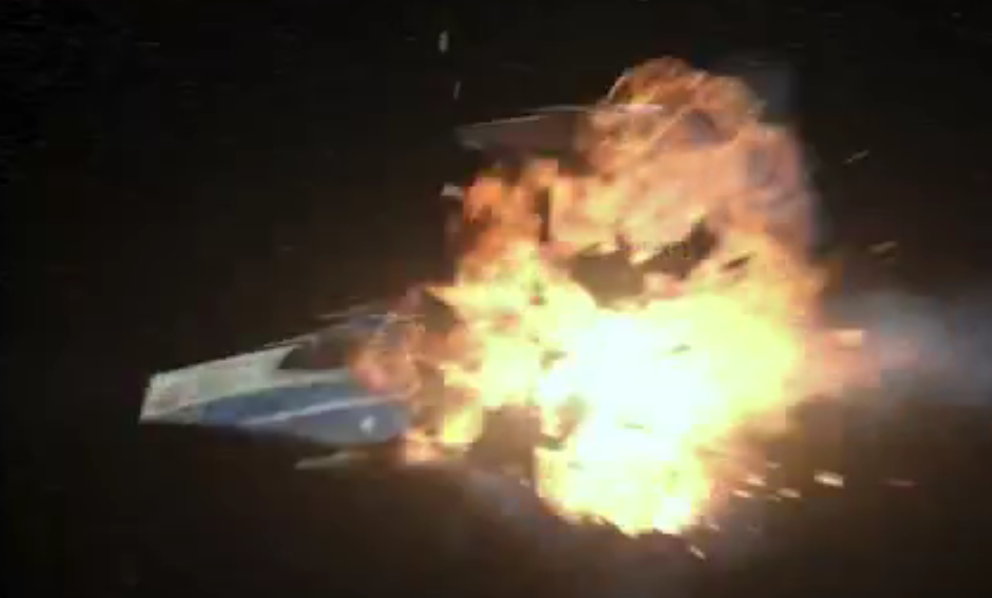 One thing I do hope though is that we get a little more on the search for the rebel base and a little more on the mysticism of the Force. The latter seems like it will come through strong towards the end of the season. I’m also wondering if we’ll be given any info on what exactly Ahsoka was up to during her time away from the Jedi Order. Or will that be saved for a comic series?

What did you think of the episode? Do the Mandalorians interest you? Will we see them join the Rebellion? Is Sabine’s story satisfying you so far? Sound off in the comments below or at the Cantina.