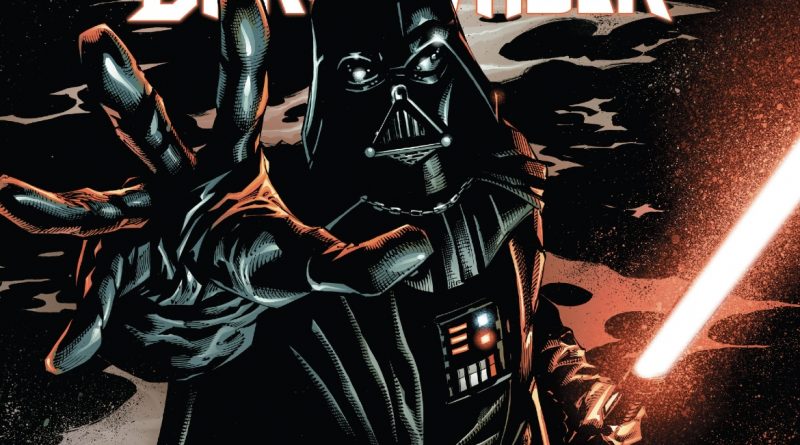 Since 2014, Darth Vader faces several adversaries in the pages of Marvel. Sometimes this is for self-preservation, but most times it circles back to serving his master, Darth Sidious/Emperor Palpatine. Now, both the Sith and the Empire face a new enemy: Crimson Dawn. Vader’s everlasting aspiration to overthrow his master and join with his son in ruling the galaxy must be put on hold as the criminal organization continues to prove itself a lethal opponent. And Crimson Dawn has just welcomed a new ally, connected to the most protected and haunting memory of Vader’s past. SPOILERS AHEAD…. 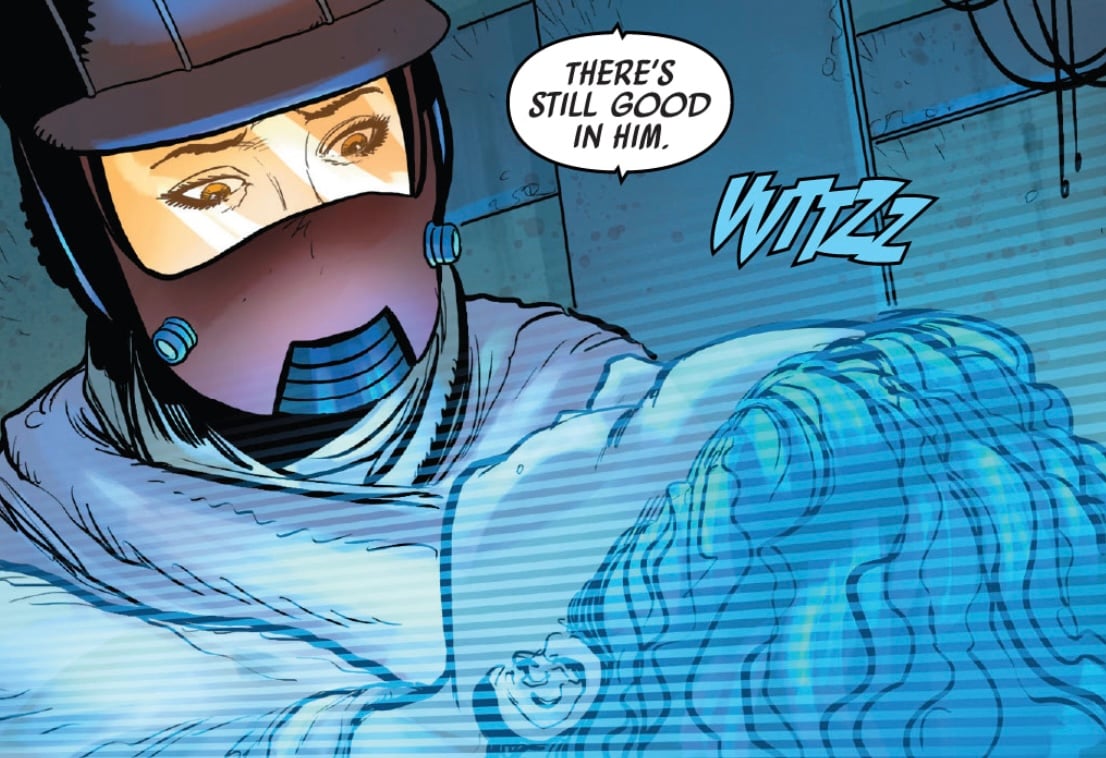 Writer Greg Pak opens with a gut punching flashback. Sabé, who re-entered the story in the previous issue, watches a recording of Padmé on her death bed. If you’ve read Queen’s Shadow by EK Johnston, you’re well aware Sabé was the closest to Padmé of all her Handmaidens. Not only does Sabé witness the death, but she also learns of the relationship between her queen and Anakin. More importantly, Luke Skywalker is the son of Padmé, and she’s aware Darth Vader is after him. We also learn Sabé has joined Crimson Dawn, which I assume we’ll get the backstory of in the near future. It’s unclear how involved Sabé is in Qi’ra’s plan to take down the Sith, as she seems more focused on finding out why Vader is on the hunt for Luke. 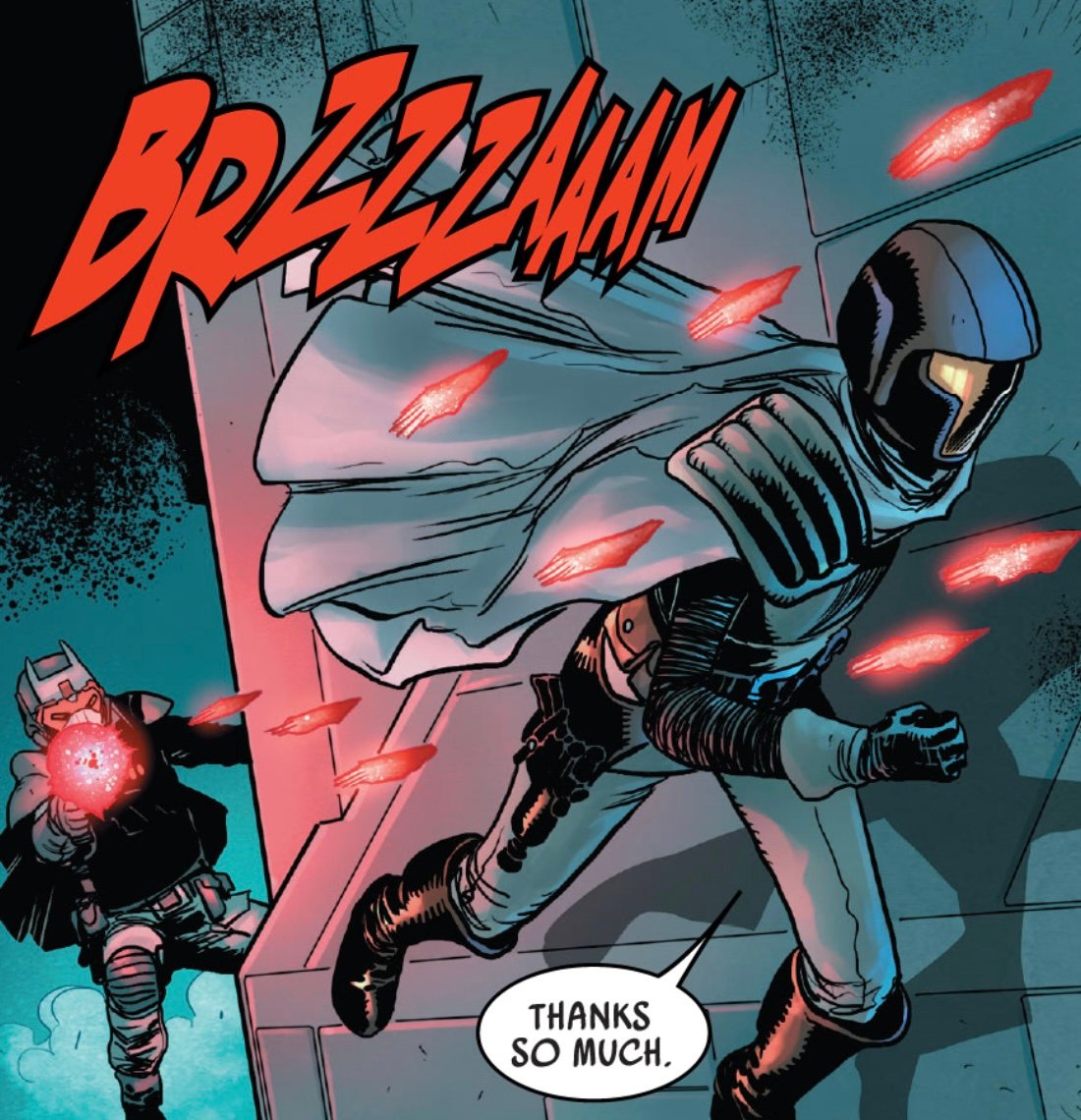 Back to present day, Vader’s just caught up with Sabé, but Ochi knows she’s with Crimson Dawn, so he helps her escape. We learn the data she left for Vader, listing every Crimson Dawn infiltrator embedded on Coruscant, is a ruse. She’s trying to drive Vader into a trap she’s setting. I’d really like to know if Sabé has gone rogue or if Qi’ra is in on this, though I suspect the latter. After the failed attempt to capture Sabé, Vader’s shuttle departs for Coruscant, and she knows her plan is working. Vader can’t resist running back to dispatch of these infiltrators she’s handed him. 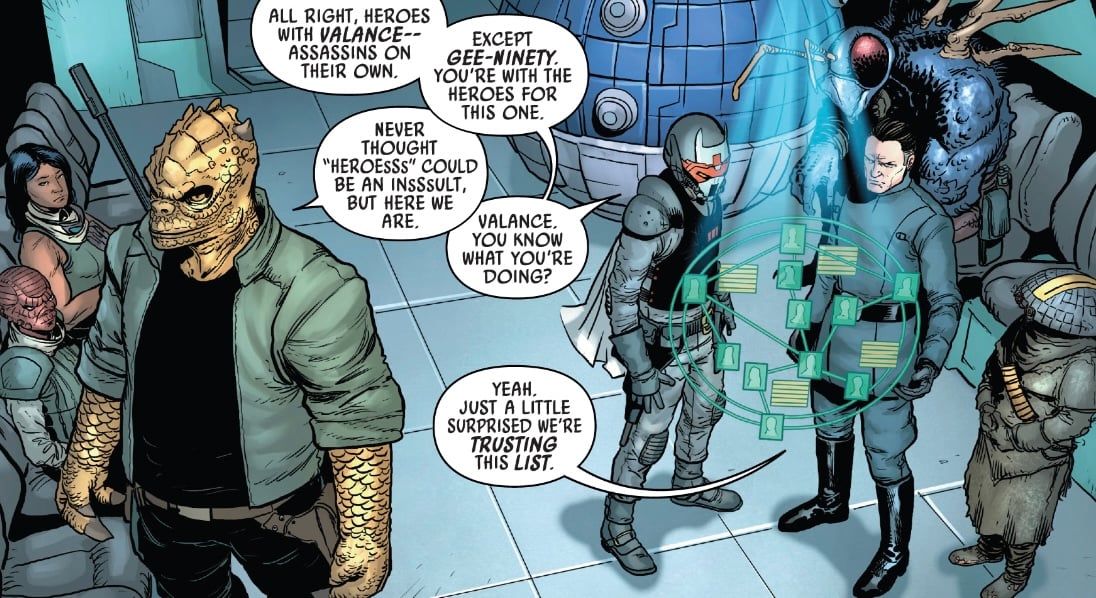 Vader is bringing the whole crew along. Valance is immediately skeptical of the targets Vader’s identified. He’s not ready to rock the boat, but he suspects one of them might be in on misleading Vader. Nevertheless, Vader and company arrive on Coruscant, quickly disembarking to dispatch their targets. 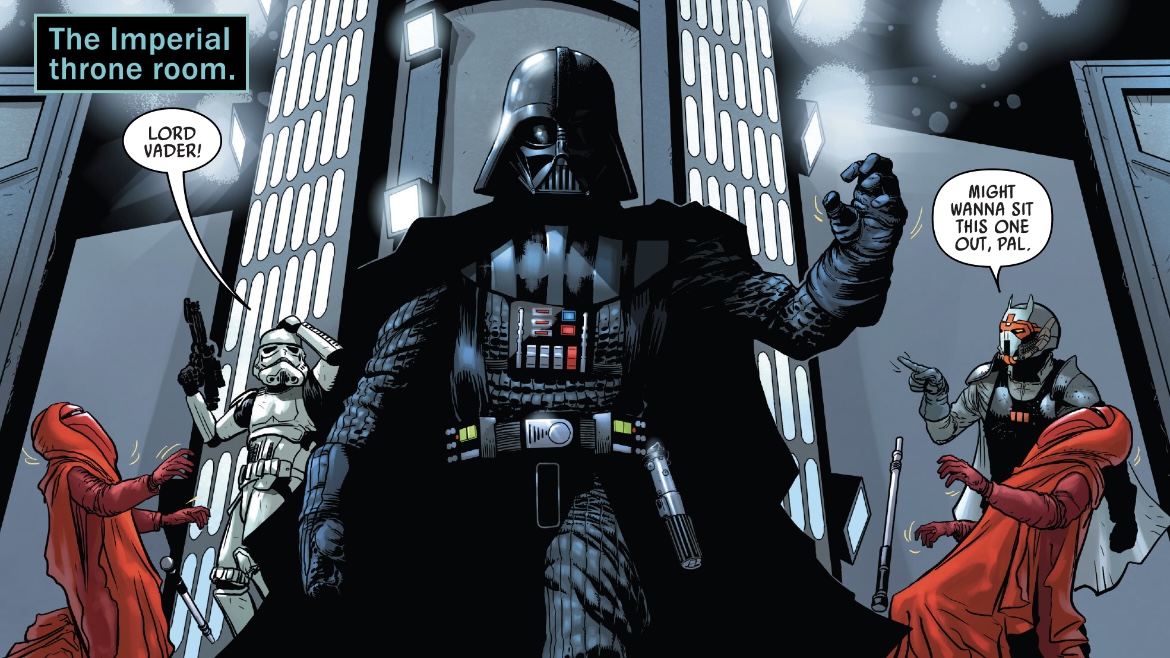 Vader isn’t known for subtly or hesitation when it comes to killing those in his way. Even Palpatine is taken aback by Vader’s abrupt entrance. Though Palpatine is surprised, he’s pleasantly so, as Vader quickly cuts through anyone who may pose a threat to them. He doesn’t interfere at all, marveling at the violence his apprentice unleashes across his minions suspected of disloyalty.

Meanwhile, the other half of Vader’s group arrive at the estate of Baron Zanchal. It’s not stated what his importance is, but I imagine he’s some corrupt aristocrat Sabé felt disposable. After the group quickly dispatches of him, though he puts up a fight and reveals he has a giant pet he’s rehabilitating (seems to be some foreshadowing of when this battle hits the streets of Coruscant). Once the baron and his guards are dispatched, the crew raids his databanks and discovers he’s not connected to Crimson Dawn at all. His business is entirely legitimate, by Imperial standards. Ochi suggests they take their money and move on, while the rest of them have questions. 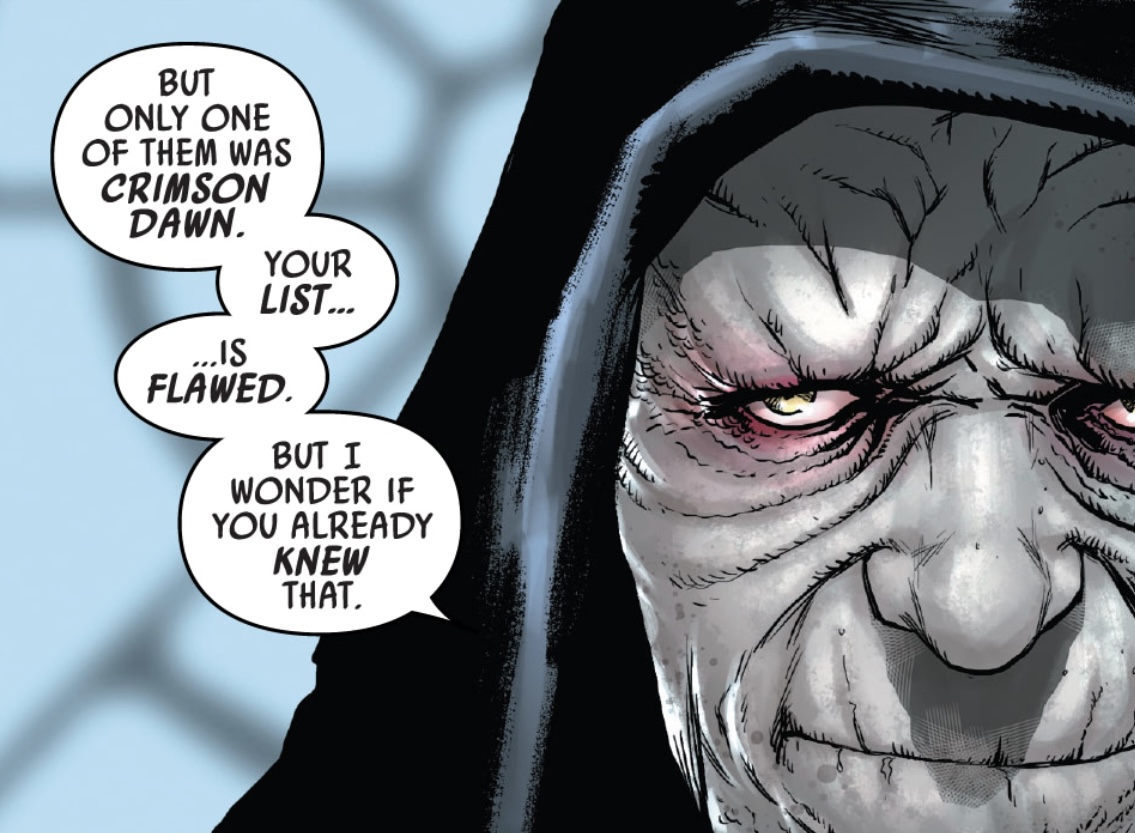 Palpatine is aware some of Vader’s targets were not Crimson Dawn, either. He doesn’t seem to mind. Palpatine knows violence will underscore the consequences of disloyalty to those who witnessed the massacre. Palpatine is emotionless, only curious where Vader’s next step will take him. These murders accomplished nothing in their battle against Crimson Dawn, so he leaves his apprentice to wherever the next lead will take him. The wanton violence of this series still leaves me unsettled each time I read it. It doesn’t make Vader any more interesting or menacing to me, this is simply Pak putting Vader through the motions. It really didn’t serve the story or the characters, in my opinion. Perhaps this will connect further down the line.

After Vader departs, Ochi and Sly Moore confer. They both realize someone is using this conflict between Crimson Dawn and the Sith to manipulate Vader into doing their dirty work. All the people on the list were extremely loyal to the Empire, so they are both puzzled how they ended up on the lists. Unfortunately for them, they’ll get their answer imminently. 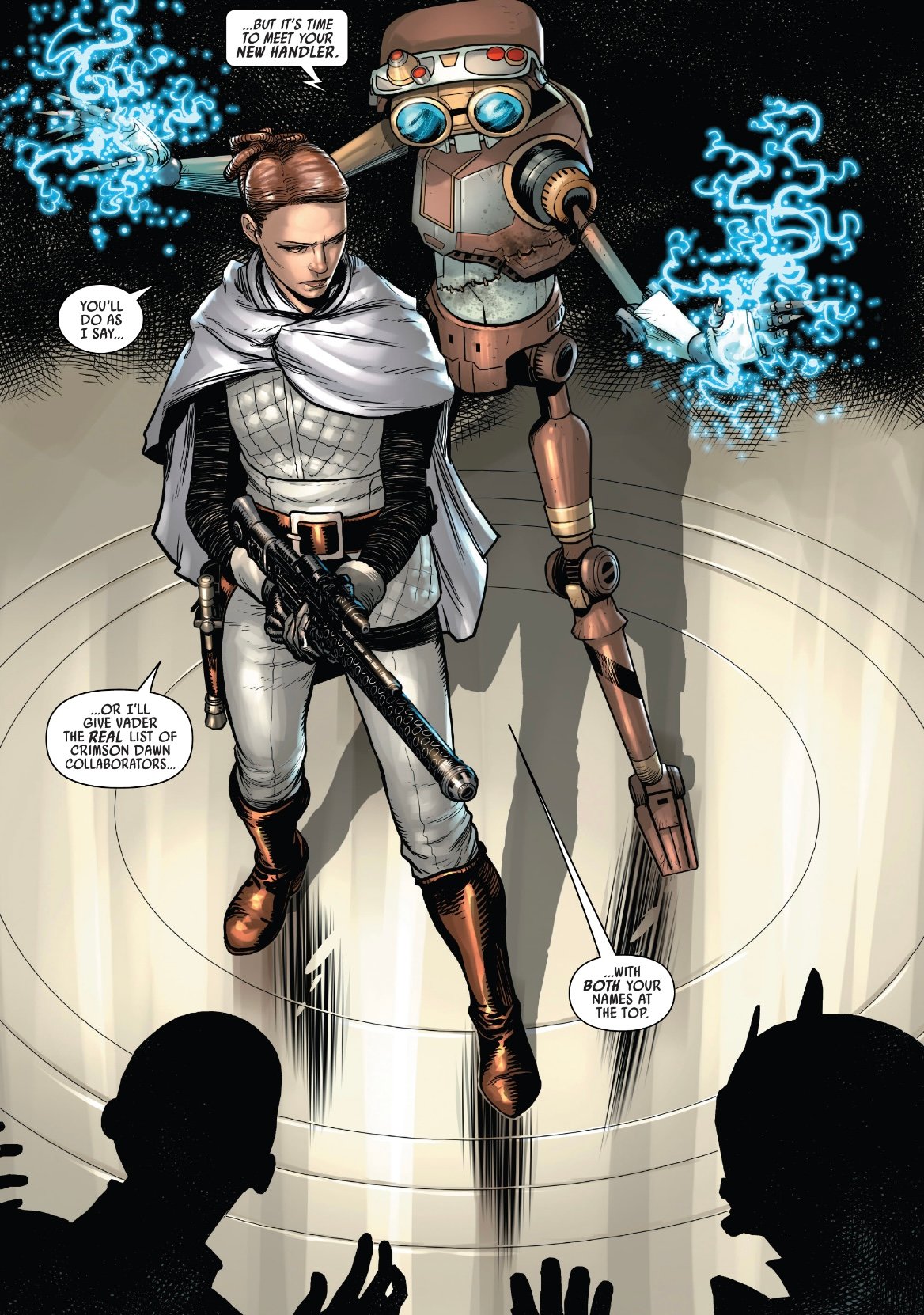 Looks like Sabé has some plans for these two, and it’s suggested she’s gone rogue from Crimson Dawn. Looks like we have a new player in this Crimson Dawn event, and I couldn’t be happier it’s Sabé. Padmé has largely been left out of Star Wars unless it relates to Anakin, and it’s far overdue for her to be getting some justice. I really hope that’s where Pak is taking her inclusion, but we’ll have to wait and see. 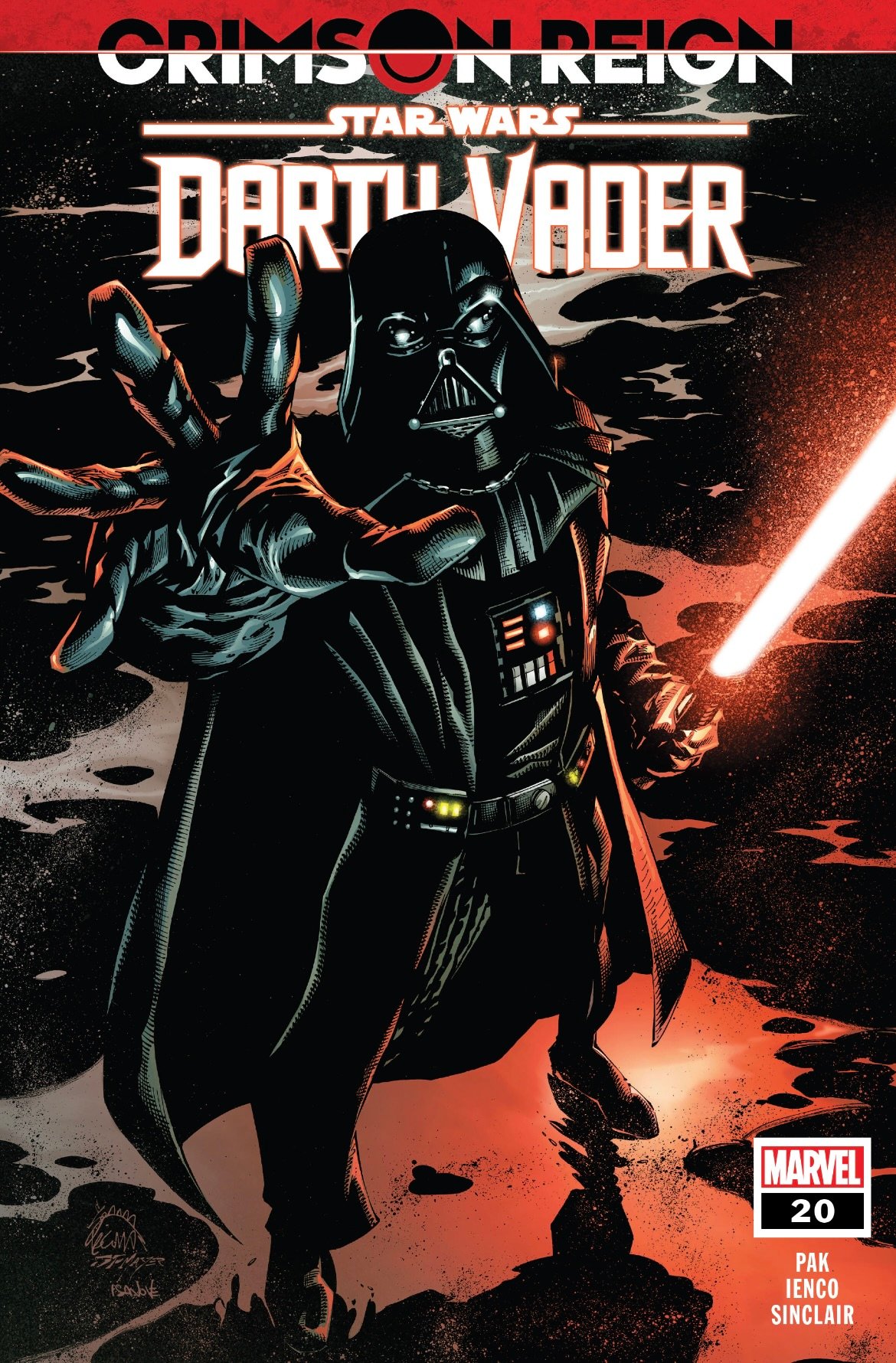 Though a lot happened in this issue, I’m not sure how far along it pushed the story. With the welcome return of Sabé and the great art from Rafaelle Ienco, this isn’t a bad issue, by any means. There are a lot of interesting questions posed, but the biggest one remains: What’s Qi’ra think of all this? I’m sure she doesn’t mind a slew of Imperials were taken out by the Sith themselves, but I doubt she’s okay with Sabé taking two of her biggest agents on a side quest. Pak gives us a lot to ponder. Though it’s an unexpected detour, I’m looking forward to the next step in Vader’s journey for the first time in a while. 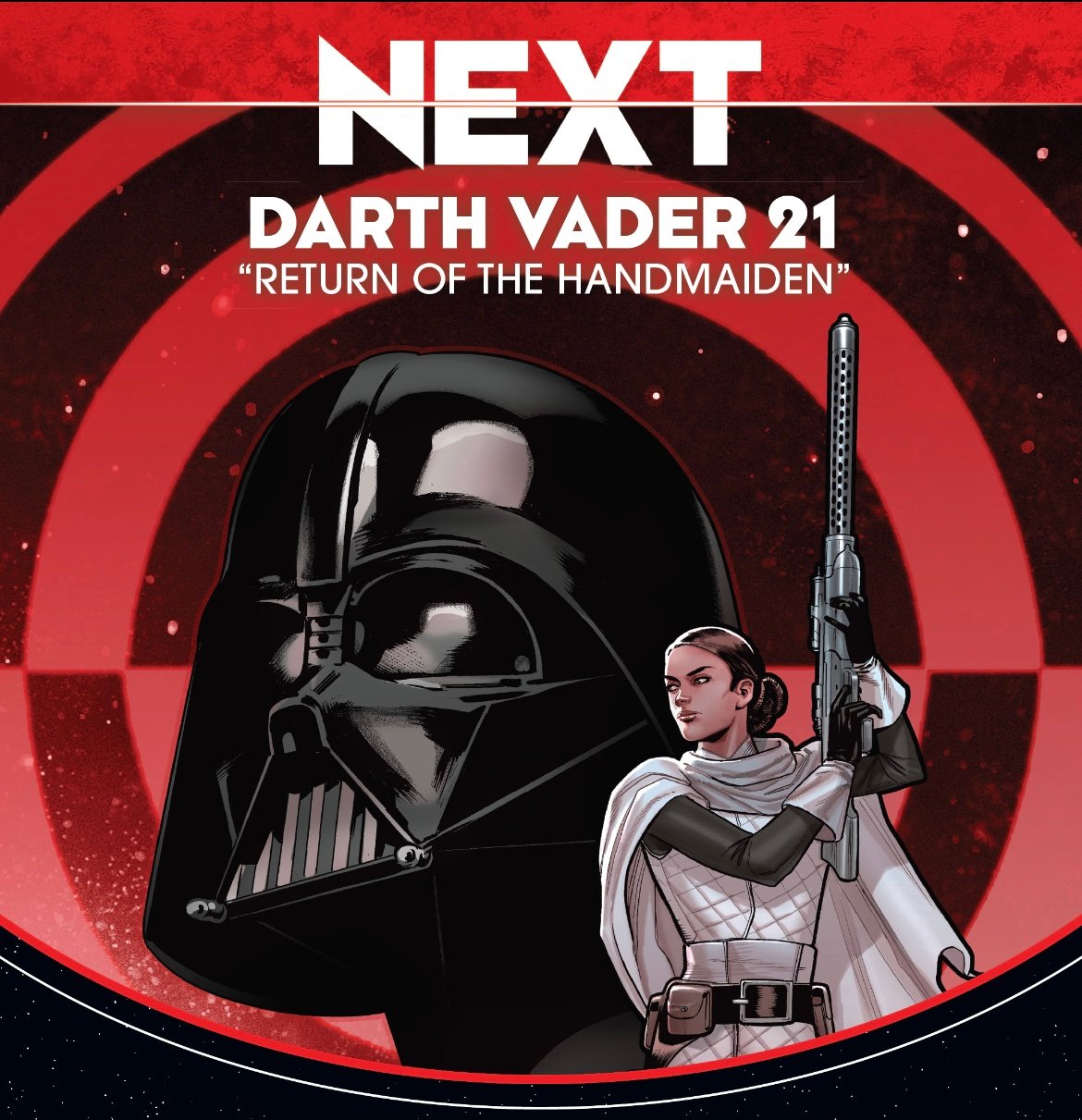 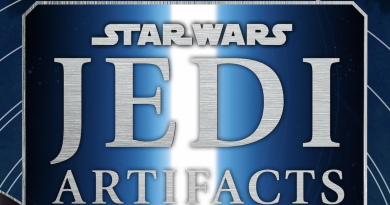 Review – Get Some Hands-on History with ‘Star Wars: Jedi Artifacts’ from Insight Editions 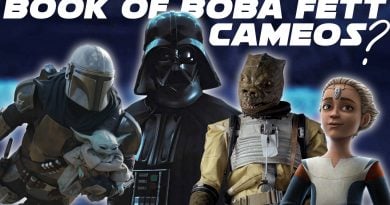 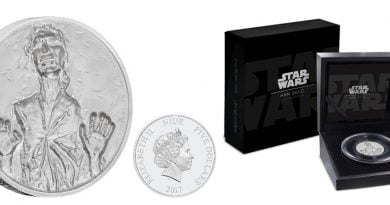