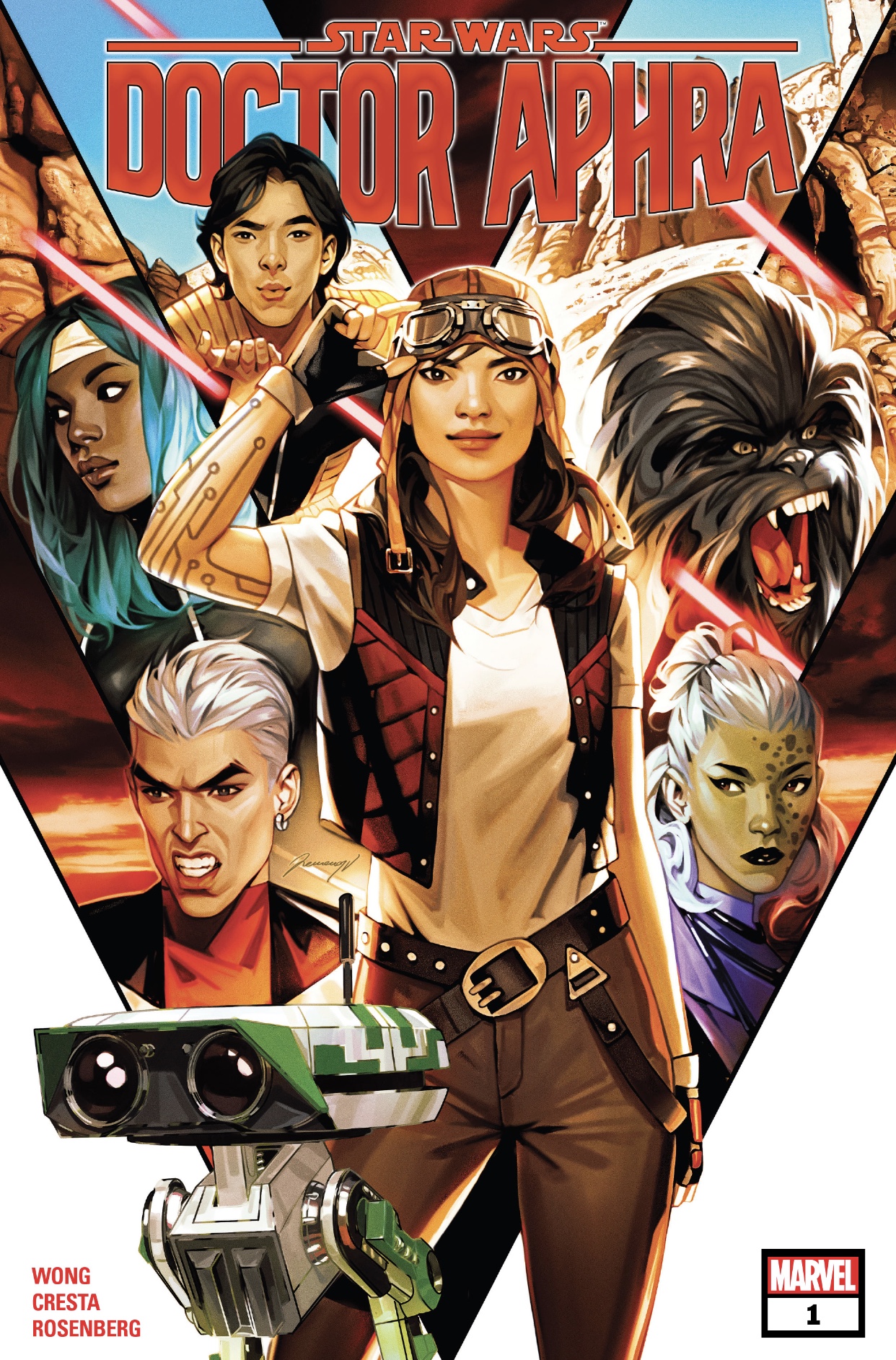 Well, comic fans got a very unexpected surprise this May the 4th…the return of Doctor Aphra. Not only the return, but the much anticipated and delayed first issue of the new series from writer Alyssa Wong! Some time has passed since we saw the galaxy’s most clever and cunning archaeologist, but rest assured she’s been busy. Due to the current halt in comics distribution, Marvel has withheld this title, but they released it digitally today in honor of May the 4th. This is our first look at what writer Alyssa Wong, artist Marika Cresta, and colorist Rachelle Rosenberg bring to this amazing character and where they will take her story. Judging from this first issue, the Doctor Aphra series is headed in a great direction.

Just as in other titles (Star Wars, Darth Vader, Bounty Hunters), we’ve passed the events of The Empire Strikes Back and are in the one-year gap before Return of the Jedi. So far, this has been my favorite way a series has established its story in the timeline. The Empire kept scouts around on Hoth for weeks and we join some grouchy, freezing stormtroopers who guard the derelict Echo Base and search the frozen wastelands for any Rebel contingency. As they creep across the icy surface in an Imperial convoy, one of the troops notices their driver has strayed off course. When he goes to question the driver, it’s revealed to be Doctor Aphra. And she’s not alone!

Bounty hunters Black Krrsantan and Tubleek Ruz, spring an ambush, as Aphra’s promised them a piece of whatever valuables the Empire’s been able to acquire from the abandoned Rebel base. Ruz suggests the bounty on Aphra is worth more than whatever they could scavenge, but Aphra’s planned for that and a new member to her team, a male assassin named Just Lucky takes a sniper shot, protecting his benefactor. There’s no doubt Aphra came to Hoth hoping to find out whether those she loved survived the Imperial assault, but no one else seems to have any idea about that reasoning. As Krrsantan, Lucky, and Aphra gather what they can, they realize they didn’t take out the entire Imperial squad.

I’m instantly crazy about the art by Marika Cresta and Rachelle Rosenberg. It’s distinct but familiar to other Aphra art of the past issue, while keeping the action tight but not claustrophobic. The pace of each scene comes through and I can’t wait to see how the scope expands as Aphra gets back out into the galaxy. Here, Aphra’s new ship, the Ark Angel III, makes a getaway from an angry AT-AT. Right away we get the sense Aphra has been alone for a while but it didn’t take long to find another group beings with questionable morals to go trolling the powers that be in a galaxy far, far away.

We learn Aphra has indeed been running on fumes and is barely surviving. She has to watch her back, but after she’s returned a rare find from Echo Base to her alma mater, The Shadow University, an unexpected prospect drops into her lap. Detta Yao (pictured above) recognizes Aphra from a lecture she heard the doctor give. Detta wants to set out on an expedition for the Rings of Vaale – “…a pair of mythological artifacts made by an ancient order of guardians…”.  I’m intrigued. Aphra doesn’t understand why the university wouldn’t fund an expedition because she assumes the rings would be priceless. Once Detta explains the rings are cursed, Aphra realizes this job is right up her alley. Detta definitely has some hero-worshiping going on in her regard to Doctor Aphra but this chance meeting seems a little too convenient to me. I’m guessing we’ll learn more about Detta and why she sought out Aphra, other than being impressed with her archaeological acumen. Though, it would be nice if that’s all it was, because so many never appreciate that about Chelli Aphra.

Detta suggests they reach out to another archaeologist – Doctor Eustacia Okka. When they track her down on an Outer Rim excavation site it’s clear these two have history. Aphra went one way, into the underworld and working for Sith Lords, while Okka focused on an academic and ethical career. Though, things didn’t work out so great for Okka either, as she was expelled for writing a questionable article for the Shadow University Journal about the Rings of Vaale. Not only did her knowledge catch the eye of Detta, it also caught the eye of one Ronen Tagge. 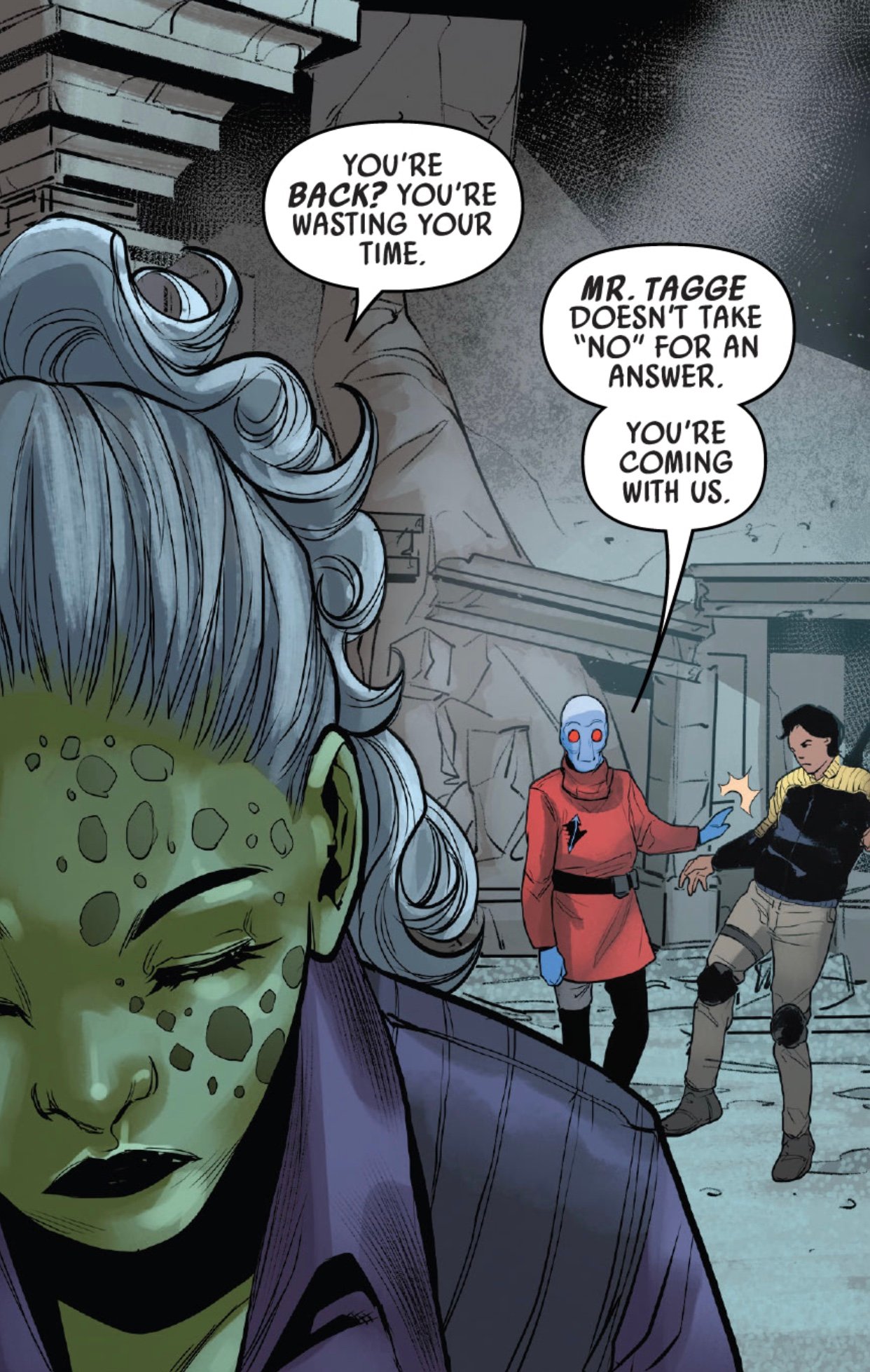 Ronen Tagge is an Imperial aristocrat (you may remember another Tagge from A New Hope and Kieron Gillen’s Darth Vader) who’s sent out a goon squad of his own to rough up and intimidate anyone who won’t do his bidding. Initially, it’s not exactly clear what Tagge wants with the Rings of Vaale, but we learn there’s a history with Aphra. As Okka refuses to comply with Tagge’s enforcers, a blaster fight breaks out. Okka activates the sentinel guards of the site she’s excavating, making both parties flea. 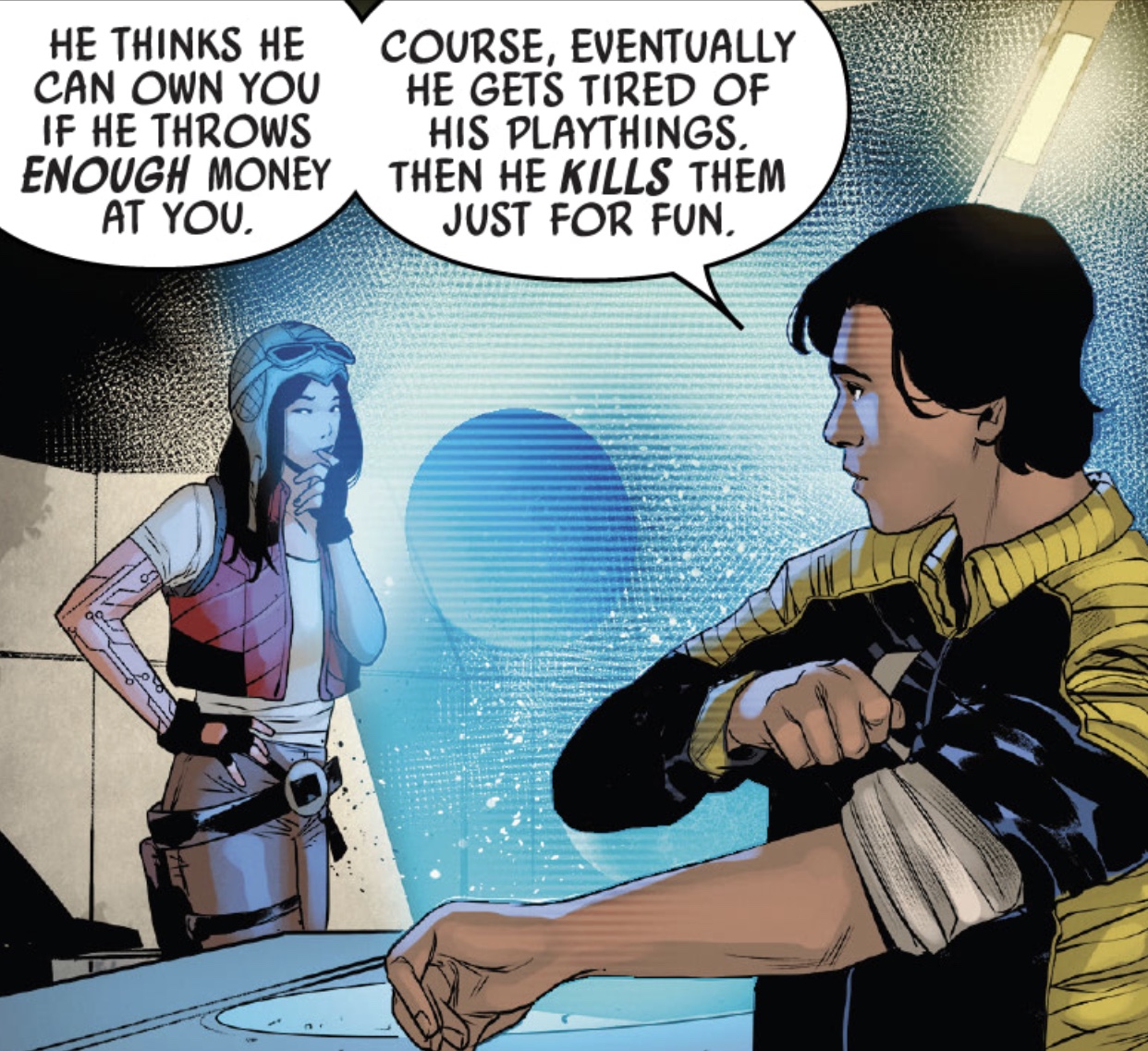 Once aboard the Ark Angel III, we learn Tagge has been especially aggressive about his desire to get his hands on the Rings of Vaale. Aphra writes it off as his well-established reputation of being a spoiled aristocrat who only desires to possess what he can’t have – until he has it –  and then he’s known for quickly disposing (or killing) the object of his desire. Aphra says she won’t even work for him because he’s so despised by most the galaxy. Detta pleads with Okka to help them and Aphra watches the young student cleverly stroke the ego of the disgraced doctor to manipulate her. Aphra proposes that Okka help them and she’ll be reinstated at Shadow University because she’ll be able to back up her studies. Okka agrees and we learn the rings curse extends to all elements and drives those who try to possess them mad. Aphra brushes the myths aside, reminding her crew the known dangers of the galaxy (people) are much more dangerous than old myths.

Well, Ronen Tagge doesn’t look evil at all. Yeah, I don’t think there’s going to be a lot of subtlety here with this one. He looks bad and right away establishes he is bad. Tagge has brought two artists responsible for his most valued pieces of art, just to have them beg him not to destroy them. So what does he do once they’re done begging?

For no reason, other than the “rush” of being the last person to possess them, he destroys them. Ronen Tagge is a jerk. 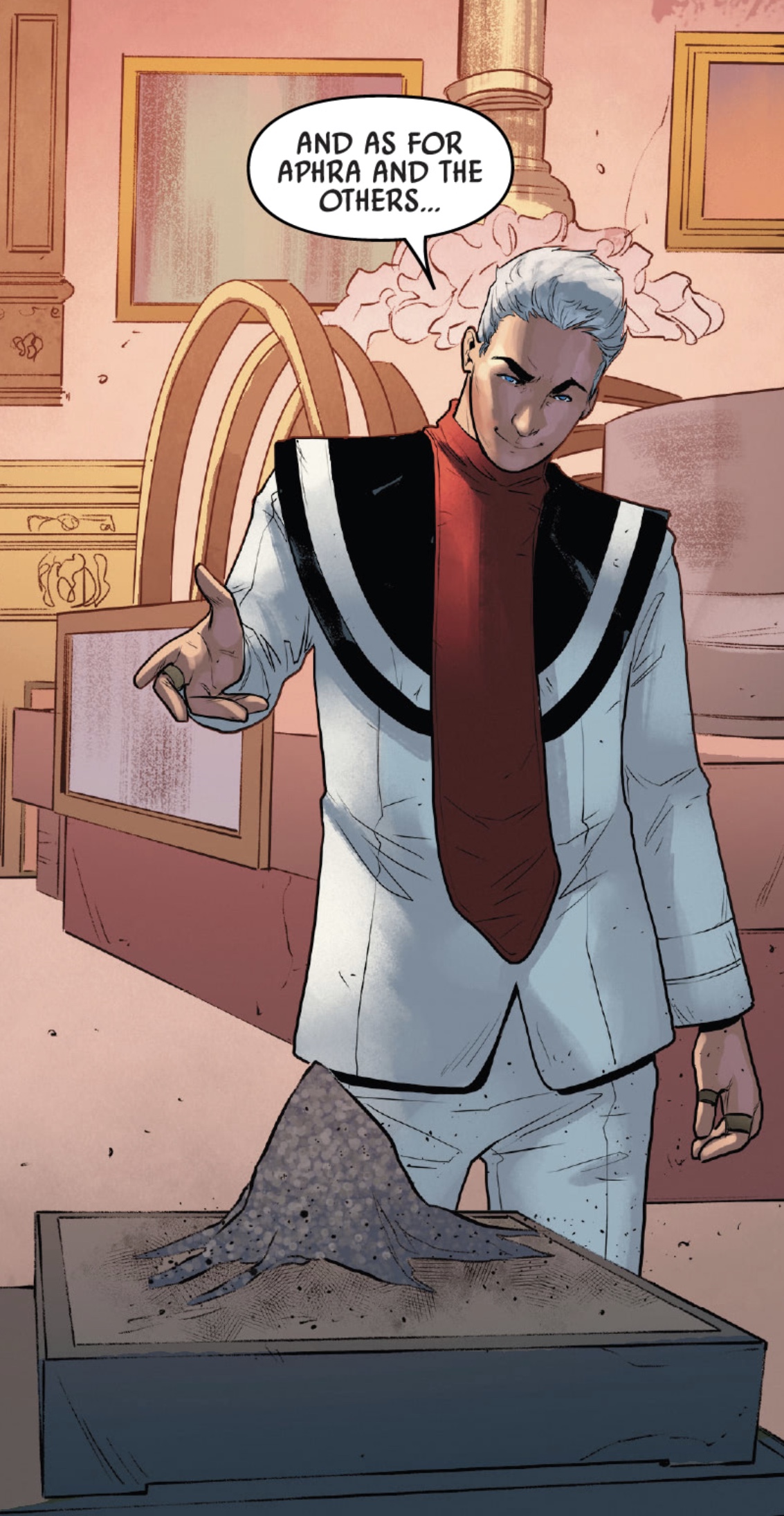 And I can’t wait to see Aphra take him down!

I’ve been excited about this issue for a long time and couldn’t wait to review it! It didn’t disappoint in the least. We have a great backstory for the characters and the artifact, Aphra in fine form, and a villain who looks like he’ll give them all a great chase. Writer Alyssa Wong hasn’t missed a beat with the character. This story has so much potential and I hope we don’t have to wait much longer for the next issue. As far as we know, Marvel will begin releasing titles towards the end of May, but there are currently no definitive dates for Doctor Aphra #2. That should give you plenty of time to get this excellent issue in your hands and get excited about what’s to come. Doctor Aphra is back!