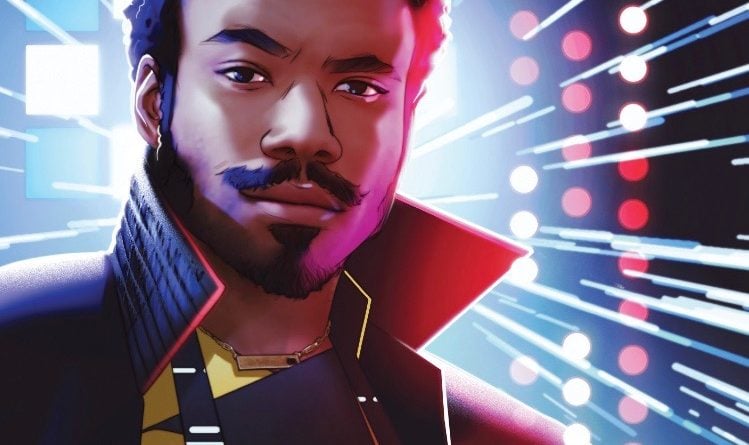 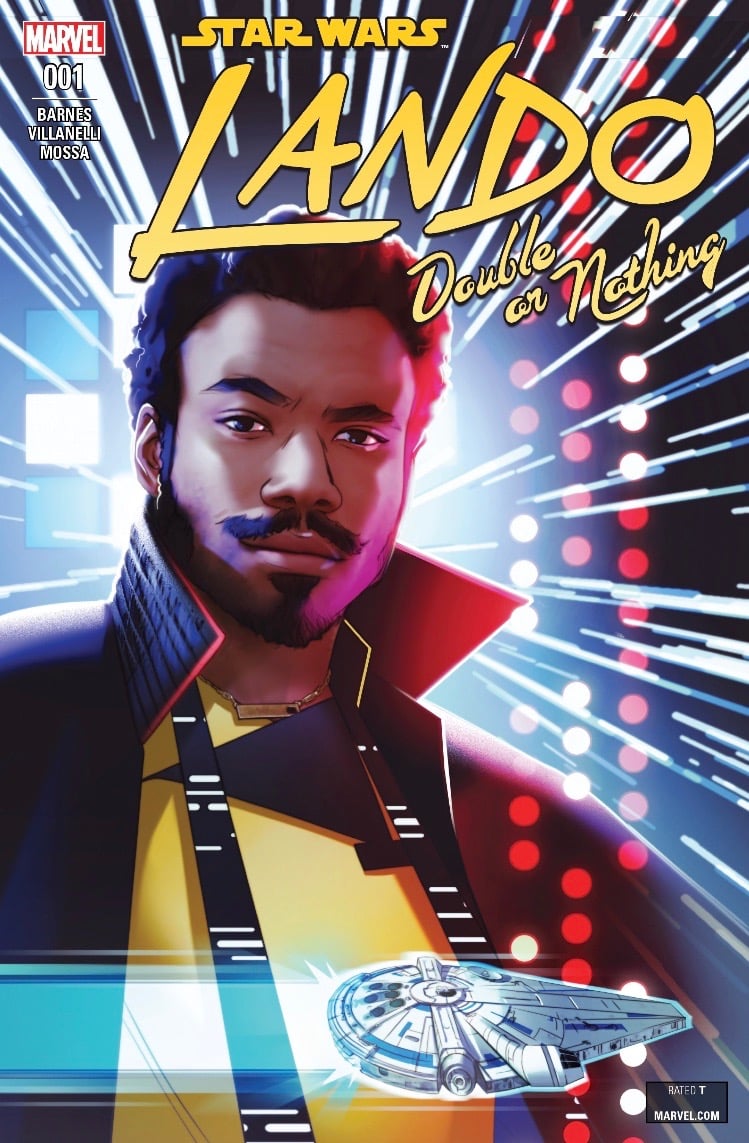 If you loved Donald Glover’s portrayal of Land Calrissian in Solo, then has Marvel got a comic for you. Actually, if you love Star Wars, this comic is for you. This issue kicks of the second series dedicated to the original captain of the Millennium Falcon who goes on to be one of the galaxy’s greatest heroes. I couldn’t be happier this comic arrived less than a week after a great new Star Wars film did. It’s the perfect complimentary piece to Glover’s performance and kicks off a story that will set the stage for where we find Lando in Solo. SPOILERS AHEAD….

The issue opens with Lando contemplating the interior design facelift he plans to give the Falcon. I guess the Falcon we meet here is closer to the version of the Original Trilogy. Elthree doesn’t seem to share Lando’s vision of a plush, mobile gambling palace. Funny to think he has no idea what’s in store for his vision of the ship. I wonder if Qi’ra and Han hadn’t made his acquaintance how close he would have come to realizing it. Lando also informs Elthree he’s considering penning his memoirs. The future is looking bright for Lando and Elthree, despite the divergence in their vision of what the Millennium Falcon should be. 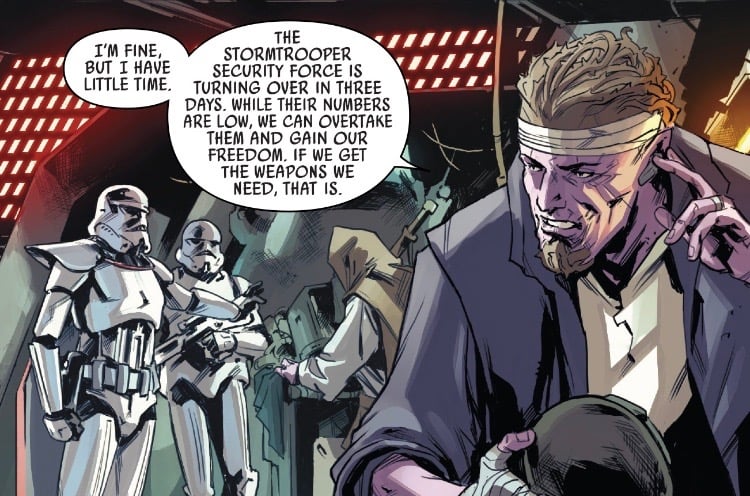 We quickly jump to another part of the galaxy – a planet called Kullgroon. This is the first time we’ve been here, but it’s the backdrop for an Imperial penal colony that specialize in repairing droids. One of the prisoners is plotting his escape, communicating with his daughter Kristiss and her team that look ready to jump into action. Kristiss and her father are Petrusian (another first appearance), and it’s not just dad who’s locked up – it’s a great deal of their people that are imprisoned. The only chance they might have is when stormtroopers make their rotation.

Kristiss and her colleagues are skilled in smuggling, but Kristiss insists they will need help. She has someone in mind. I love the look of the Pertrusians and already want to know more about them. They just look tough. It’s cool to see a new culture introduced into the canon and I look forward to learning more, as their story sounds intriguing. No doubt Pertrusia fell victim to the same scourge of resource grabs the Empire made to pour into the Death Star.

They are able to track Lando down on the planet Batuv. We’ve never been here either, but it is home to a large casino, which means Lando is probably close by. Kristiss finds him quickly and introduces herself. After hearing the plan to arm her imprisoned people, Lando rebuffs the offer, suggesting she’s trying to play on his morality by hiring him for a job that sticks it to the Empire. She lets him know that she needs his skills, not his morals, and will pay him well for it. He’s still not interested, so she tries to appeal to Lando’s other desires. Kristiss gets pretty close to Lando and it doesn’t take long for our favorite scoundrel to warm up to her. Just as they pick-up their drinks and are going to the continue the conversation of his role in freeing her people, an old acquaintance approaches Lando. 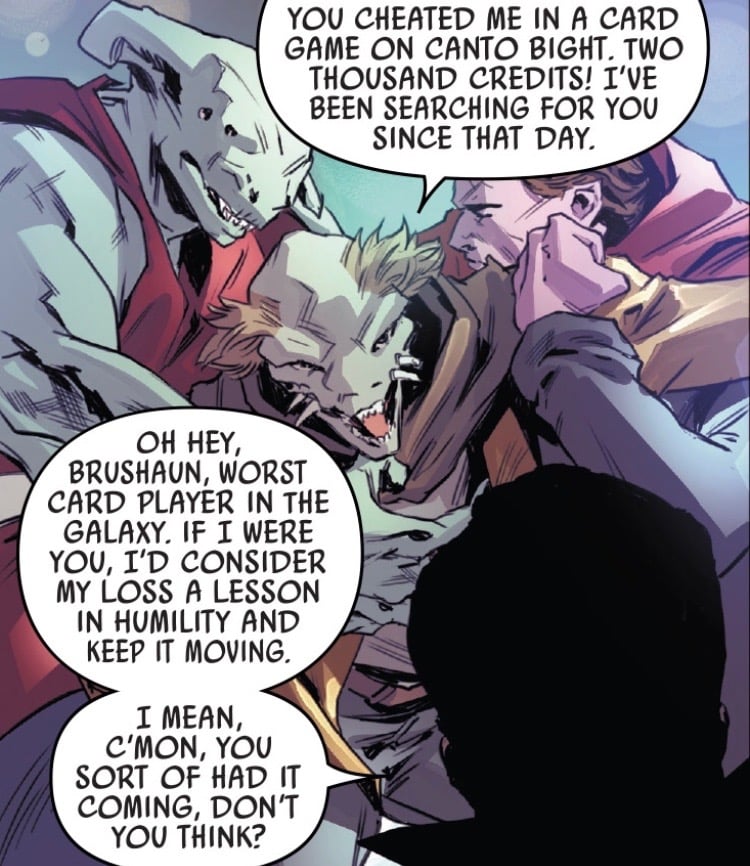 Someone else figured out that Lando plays with cards up his sleeves and is not happy. Instead of taking Han and Chewie’s approach, Brushaun is out for blood. Lando plays it just as cool as you’d expect and let’s the casino security contain his angry former opponent. Kristiss recommends they leave, as Brushaun might have a crew. They quickly make their way out of the casino and Kristiss offers a salary to Lando that would cover what’s owed to Brushaun. She leaves him with a kiss to think it over. Kristiss is checking off the list of ways to persuade Lando Calrissian to help break her people out of the Empire’s custody.

Lando considers his options, while Elthree states he really doesn’t have a choice. This Lando is far from the noble pilot we know leading a charge on the second Death Star. He actually considers taking Kristiss’ money and ditching her, but Elthree is having none of it. The way she sees it, the Empire is simply evil, and any opportunity to do something against them while making some money for himself is a no-brainer. It’s the moral and logical choice. Elthree yearns for the desire to help those oppressed and wishes she could do more to help her species, so she has no idea why Lando would even consider why he should help his fellow humans. 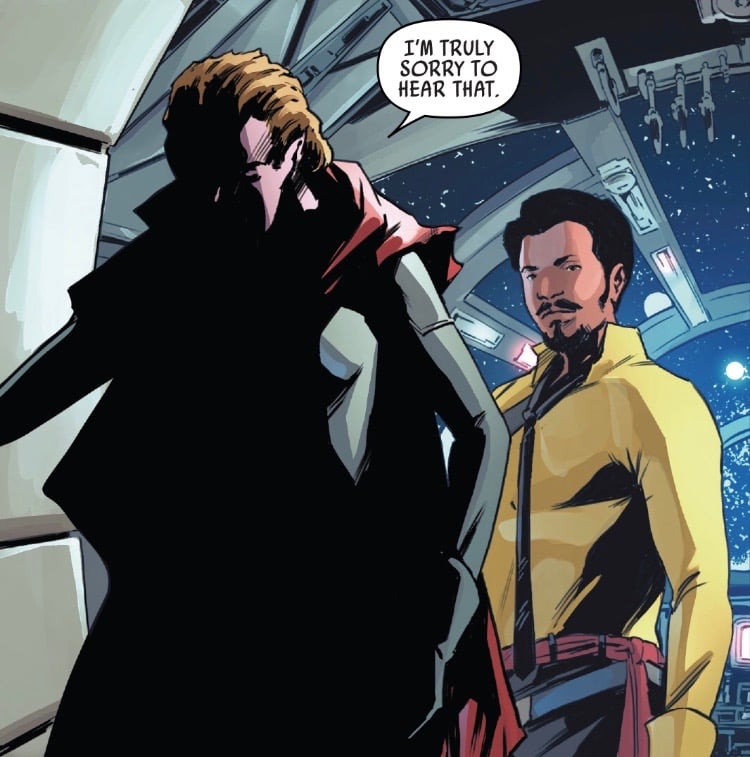 Lando takes the job, but it’s not a smooth ride there. The disconnect between Lando’s view of the galaxy and Kristiss’ couldn’t be more apparent. Kristiss describes how the Empire annihilated her planet’s resources so her people would become dependent on them. Lando seems to think of the galaxy as his playground, with the occasional price on his head a mere inconvenience. He’s pretty sure everything will work out well for him in the long run and not terribly thoughtful when it comes to the troubles of others in the galaxy – at least at this point. When Kristiss continues the description of her planet, Lando questions her on how it’s possible she’ll be able to pay him the amount promised. She says she actually can’t and was hoping he would help her for a lower fee. Lando says he won’t and that she still needs to pay him what she said she would.

Not a lot of time for reflection after Kristiss expresses her disappointment, as the Empire has caught notice the Millennium Falcon is headed for their outpost. I’m going to assume the outpost is near the Outer Rim, since these are the only ships that seem to threaten the Falcon. There’s no Star Destroyer or Imperial blockade, so I’m not really sure what Lando, Kristiss, and Elthree are up against. Lando takes to the gun turret while Kristiss and Elthree focus on piloting the ship. Elthree proves to be one helluva a pilot. They evade the TIE Fighters and Lando manages to destroy them. The art here by artists Paolo Villanelli and colorist Andres Mossa is great, as it is throughout the entire issue. I especially love the space scenes with the Falcon here and in the opening pages. The duo should have a lot in store for our eyes in this series if this issue is any indication.

Lando’s ready to celebrate the victory, but Elthree brings him back down to Earth. They’ve arrived at Kulgroon and it’s time to get to work. In a great comic book cliffhanger style, the issue ends there, just as the adventure is about to kick-off.

I loved this issue and the series is very promising. The first Lando series remains one of my favorites, so I’m excited to see what this one delivers. A chance to explore the Lando that Donald Glover portrayed is an added bonus. This is writer Rodney Barnes’ first time writing Star Wars and he sure as hell delivers. I could hear Glover’s voice in every word and I’m intrigued with the premise. I’m also happy Barnes has introduced new cultures and worlds into the canon. I’m all for the Star Wars Universe expanding in it’s scope, so the more different people and places we get to see, the better. The art compliment Barnes’ writing and the whole book has everything a Star Wars fan could want. I’m very, very happy we have this book to read and I’m sure future issues will be in my hand while I’m standing in line for my third viewing of Solo. If you haven’t seen Solo yet, don’t let that stop you from picking up this great book. Highly recommended! 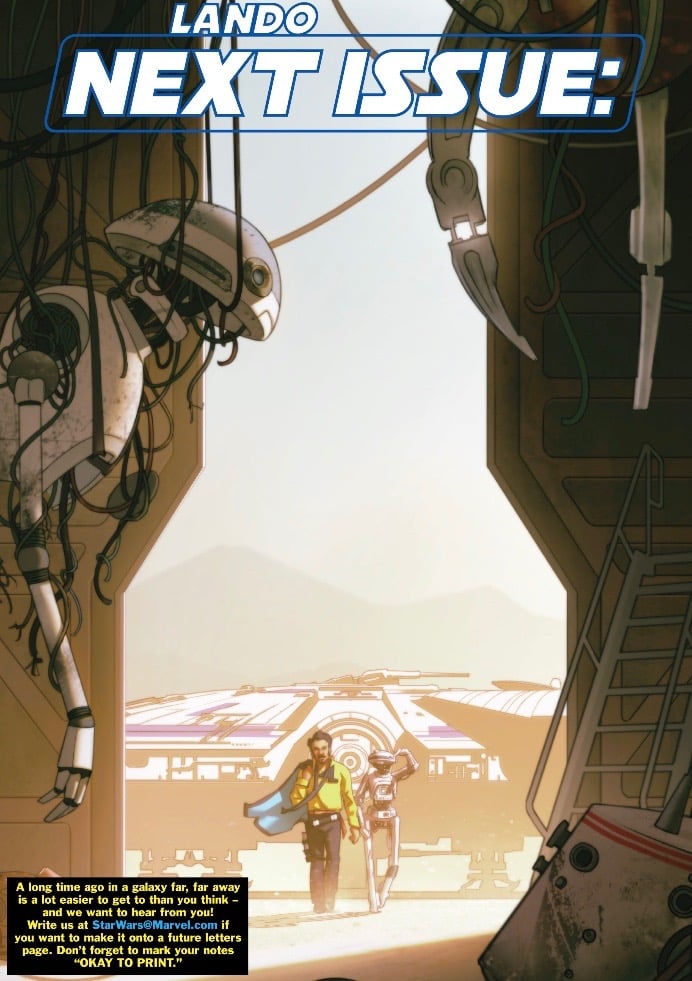 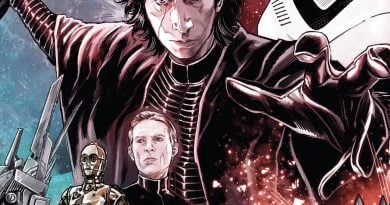 Review – An Old Ally Tested In Marvel’s Allegiance: Journey to The Rise of Skywalker #2 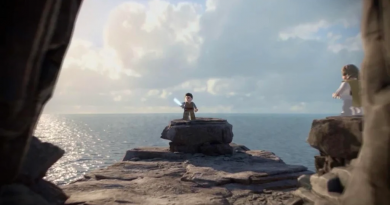 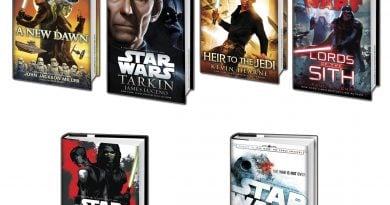