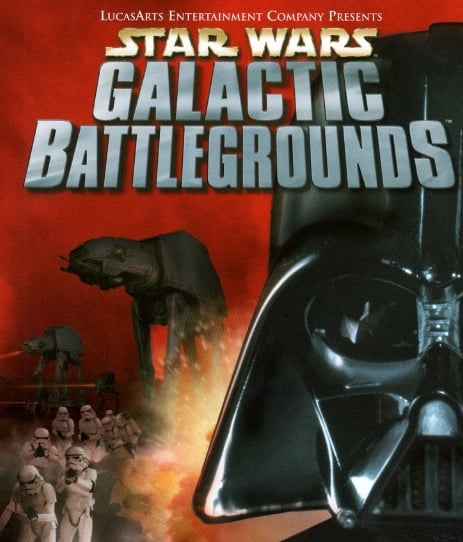 Age of Empires meets Star Wars, what’s not to like?

Following the massive success of Age of Empires 1 & 2 back in 1997 and 1999 respectively, LucasArts contacted Ensemble Studios to develop a real-time strategy video game based on the Star Wars saga. The game would go on to use Ensemble’s famous Genie engine. LucasArts’ Garry M. Gaber, who previously worked on titles such as Shadows of the Empire and Dark Forces II, designed and directed both the base game and its 2002 expansion: Clone Campaigns. This familiar take on the RTS genre received generally positive reviews and the applause of a fanbase that was thirsting for a solid Star Wars strategy title after the ineffective Force Commander (2000); mirroring Age of Empires yielded results. 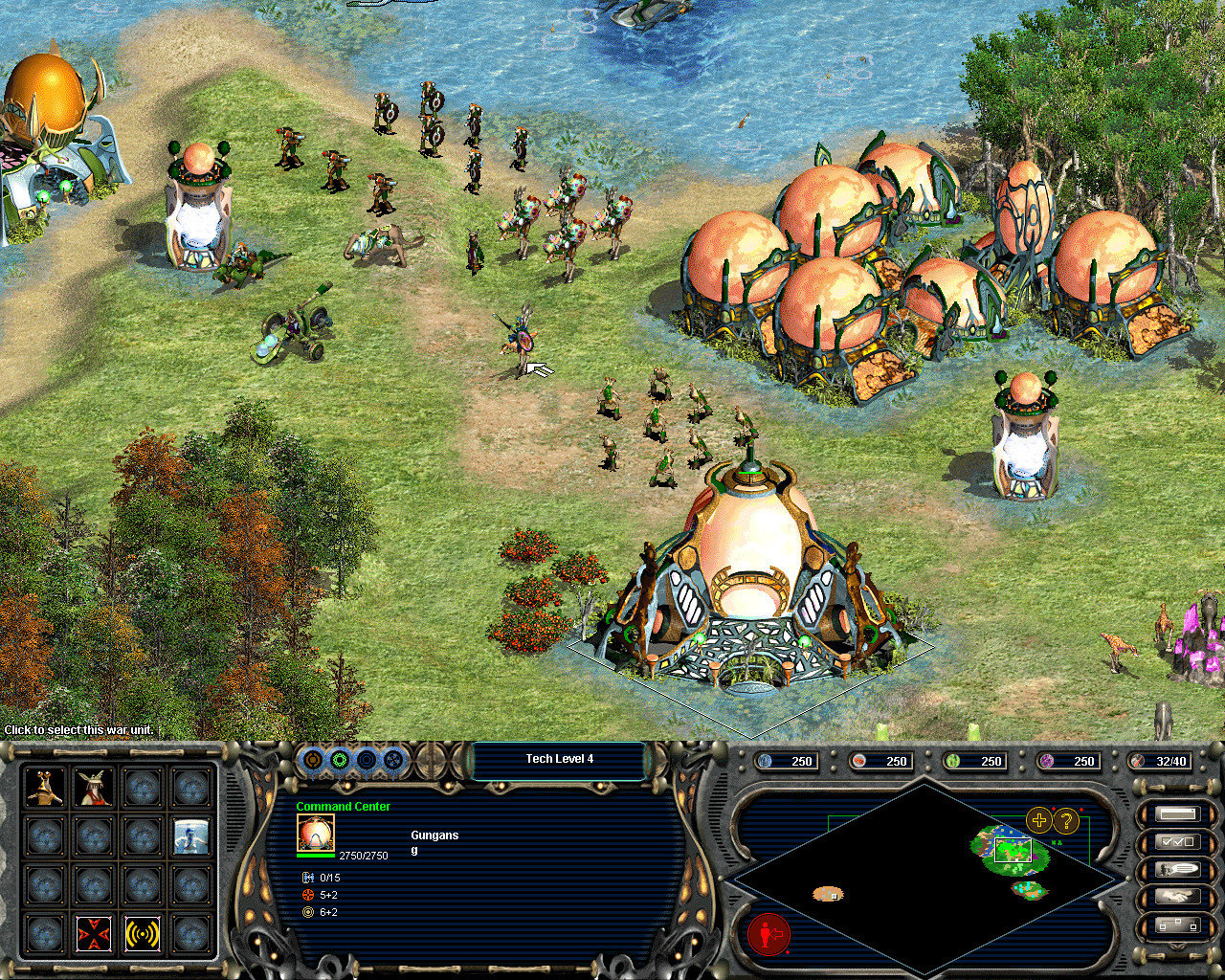 When it first launched in 2001, the game featured six different factions: Galactic Empire, Rebel Alliance, Gungans, Royal Naboo, Trade Federation, and Wookiees. Much like in the Age of Empires titles, all factions follow a general pattern but have a set number of advantages and disadvantages, as well as some unique units and technologies that are developed over the course of a game. These Genie-powered RTS titles were no StarCraft or Warcraft when it came to gameplay variance between factions, but they offered more than enough cosmetic and playable variety. For example, Gungans have fambaas with shield generators (as seen in The Phantom Menace), which spice up the faction’s gameplay style quite a bit. Most units and buildings can be upgraded through different stages, often offering synergies between them. All factions are also able to build Jedi and Sith temples that can produce knights and masters who are able to pick up holocrons scattered around the map. Effectively placing holocrons in temples generates free nova crystals, one of the game’s four currencies, for the civilization that holds them. Furthermore, there is a victory condition tied to collecting all the holocrons in the map and keeping them secured for a while.

Galactic Battlegrounds also features an extensive campaign mode split into six parts that starts with a tutorial which follows Chewbacca and his family in their quest to rid Alaris Prime, a moon in the Kashyyyk system, of the Trade Federation. The other campaigns range from narrating events that precede the movies to filling in the gaps between them. Of course, these stories are flimsy canon-wise, so do not get too hung up on the details. Much like in the Age of Empires titles, playing through at least the first campaign is recommended if you are not an RTS veteran. 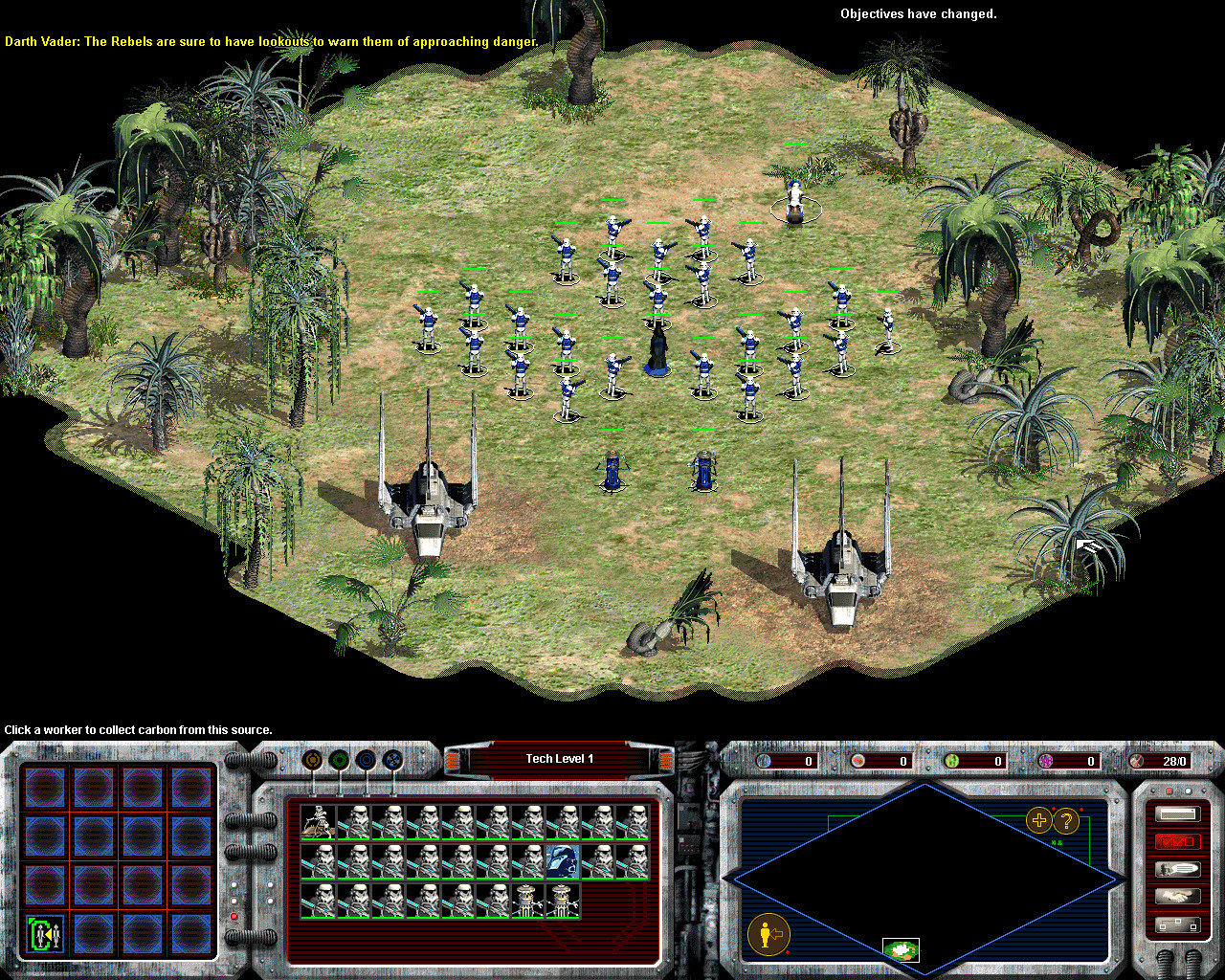 One of Genie Engine’s strengths is how well the games built on it have aged visually thanks to its clear isometric view and the gorgeous 2D sprites that feel like the “sweet spot” between cartoon and realistic art styles. These games look remarkably when using modern resolutions such as 1080p. On the opposite side, the engine itself presented some technical difficulties that were never really fixed and ranged from AI issues to rigid animations for vehicle units; spaceships in this game are particularly janky and often feel like a waste of time.

Players who want to experiment with everything the game has to offer can also fire up a surprisingly solid scenario editor which allows to create full custom maps that can be tied together to form campaigns. This feature has always been a hallmark of the Age of games, and Galactic Battlegrounds is no exception. Many hours of my childhood were wasted trying to get some made-up custom battles just right. 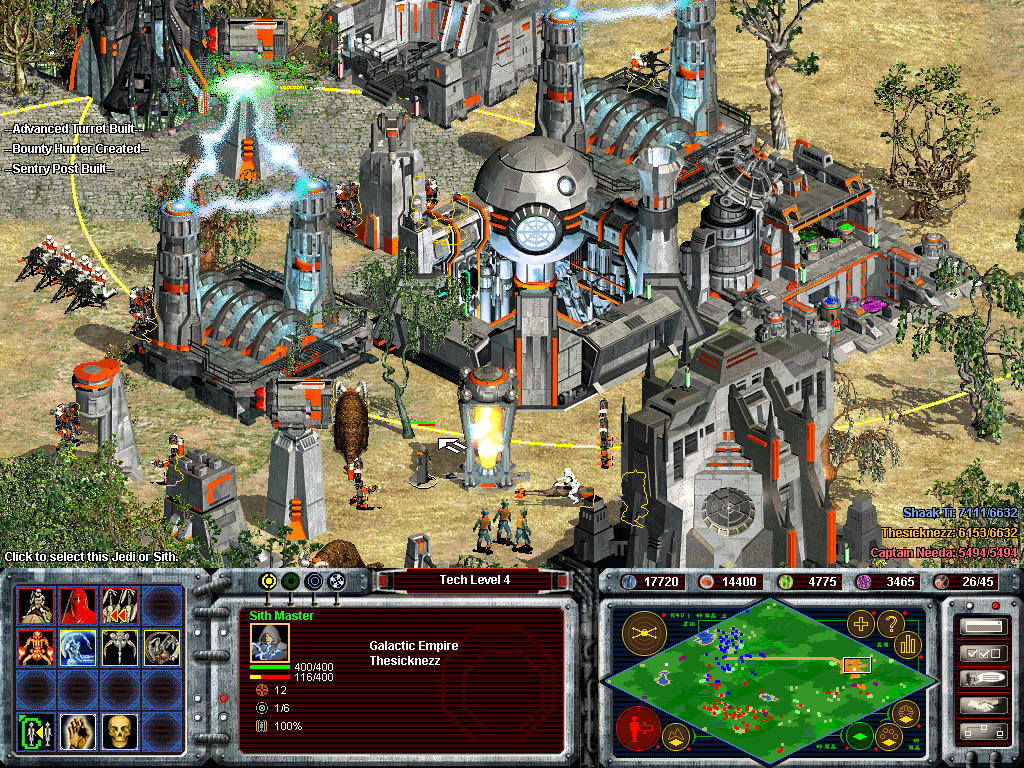 The game’s expansion pack, aptly named Clone Campaigns, was released two days before Attack of the Clones hit theaters. It added two new factions to the game: the Galactic Republic and the Confederation of Independent Systems (yes, they are separate from the Trade Federation). Each faction also has a campaign of its own, and the base game received some much-needed “quality of life” changes.

Like in most RTS titles, the majority of players spend most of their time with Galactic Battlegrounds playing custom games where they can relax or approach the game in any way they want. Although the original servers were shut down eons ago, playing with other players over (real or simulated) LAN has always been possible. Disney and Lucasfilm also re-released the game a few years ago with several small fixes and changes that allow it to run properly (or at least better) on modern systems. Despite all this, the All-In-One Patch is a strongly recommended install, as it effectively fixes the game’s major issues, offers proper widescreen support, and expands the musical selection that will accompany you over the course of your galactic conquests. It also works with any version of the game (CD, Steam, GOG), which is neat.

Galactic Battlegrounds still stands tall as both the greatest Star Wars RTS released to this day and a testament to how sticking close to a known formula is sometimes the right choice (it might be the Episode VII of Star Wars video games). Petroglyph Games’ Empire at War arrived years later and did something wildly different and remarkable. How did it fare? A good question, for another time.

Francisco J. Ruiz is that guy who has watched Jurassic Park a thousand times and loves Star Wars. His hunger for movies is only matched by his love for video games. As he continues to write about what he enjoys (and doesn’t), he’s working on his English Studies degree at the University of Málaga, in Spain.