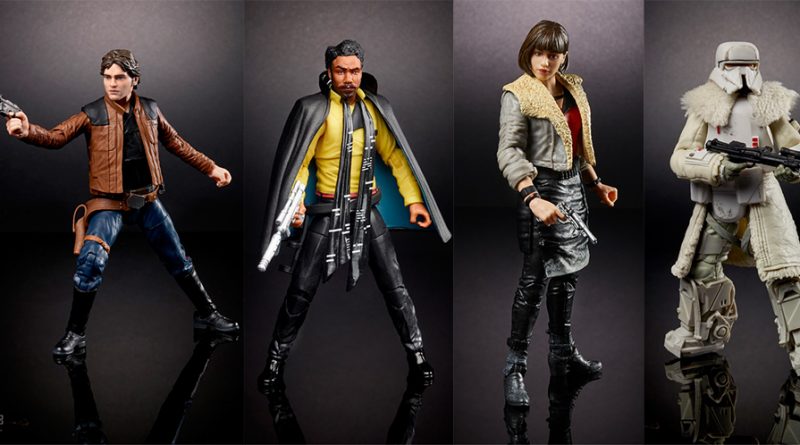 Just three days to go before the Toy Fair in New York, and Hasbro and LEGO have revealed some of their toys from Solo: A Star Wars Story. There aren’t any surprises or new characters, but there is a cool hint about why the Millennium Falcon looks different in the movie, and we also get a much closer look at the very cool Range Stormtrooper.

First we start with LEGO’s reveal, thanks to The Hollywood Reporter. One of the most anticipated sets from the movie is of course the new Millennium Falcon. The set consists of 1,414 pieces and will cost $169.99. Here’s a brief description of the set:

Pull amazing maneuvers from the cockpit. Jump in the laser turrets and fire back at pursuing craft. Then check the hyperdrive and get ready to jump to safety! After all that excitement, kick back with Han and his friends with a drink from the bar, while you let Chewbacca win at Dejarik. Then it’s off to bed for a well-earned snooze in the bunk aboard the fastest ship in the galaxy! 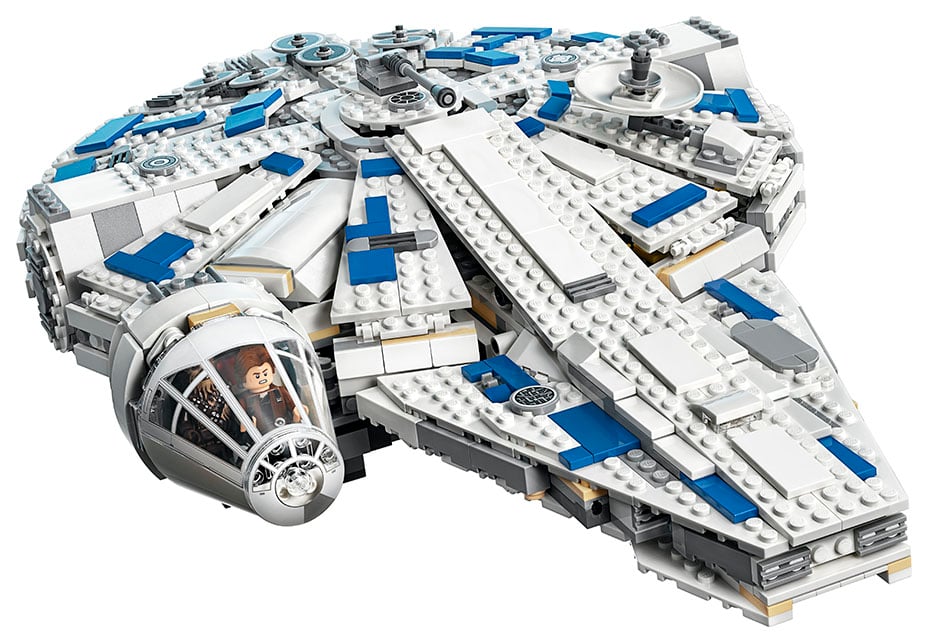 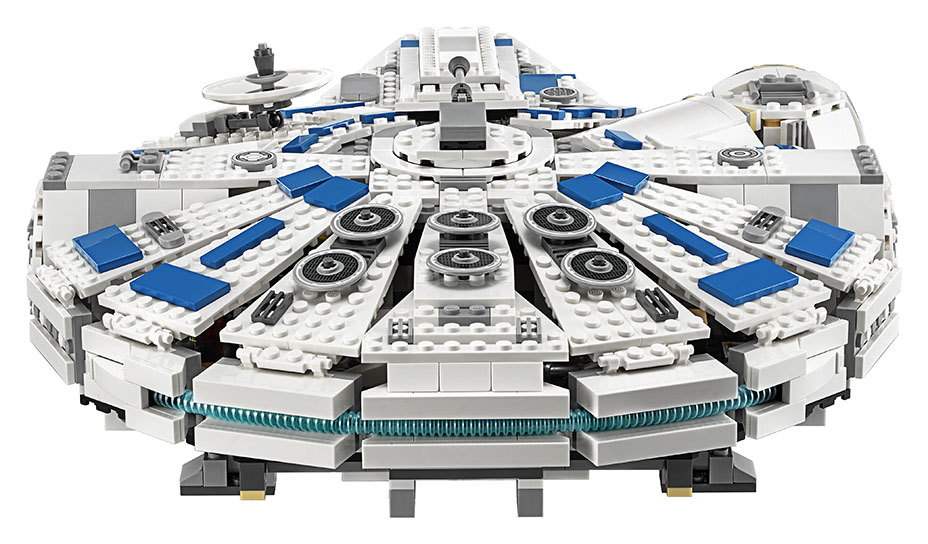 The article doesn’t specifically say what minifigures you will get except for the young Han Solo, but from previous leaks we know that the set will come with 7 minifigures – Qi’ra, Han Solo, Chewie, Lando, Kessel Operations Droid (the red one below), the droid DD-DB, and the mysterious character Quay Tolsite. 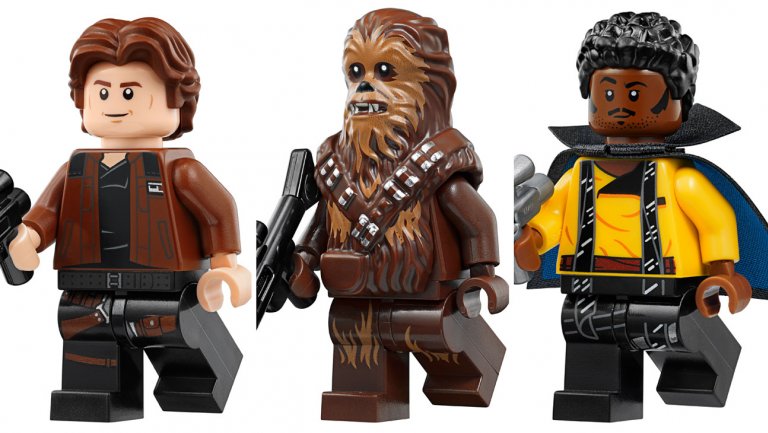 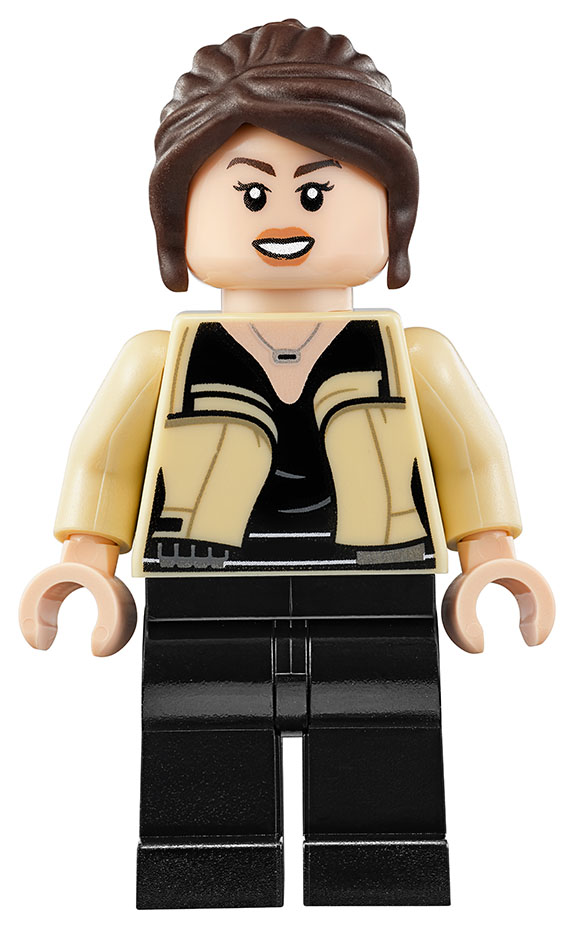 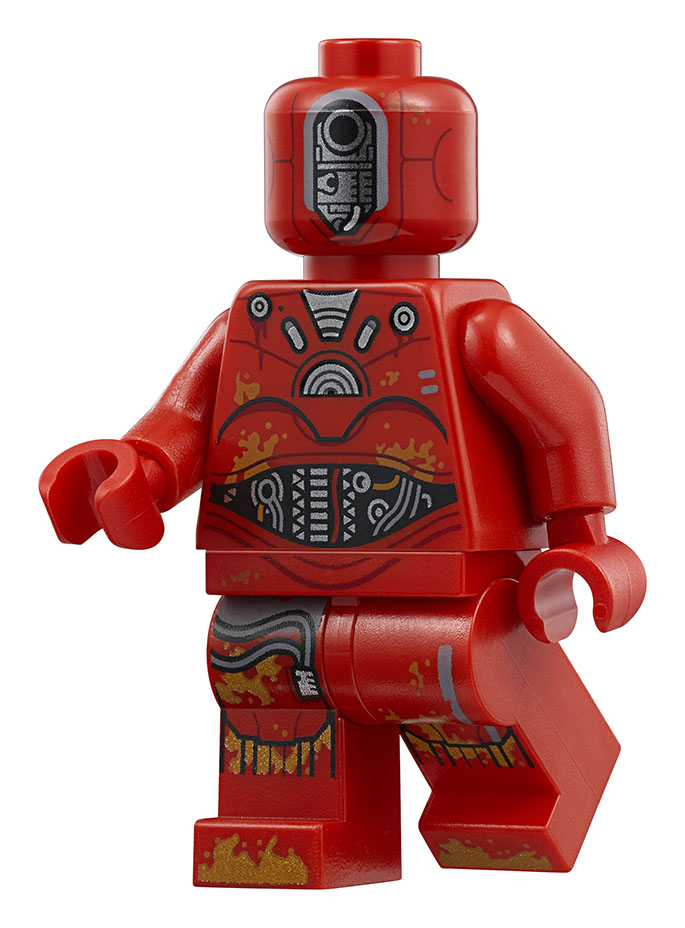 Now, let’s take a moment to look at some of the new toys from Hasbro via Entertainment Weekly . As mentioned previously, there’s not much in the way of reveals here as we are already familiar with the characters and the new look of the Millennium Falcon. 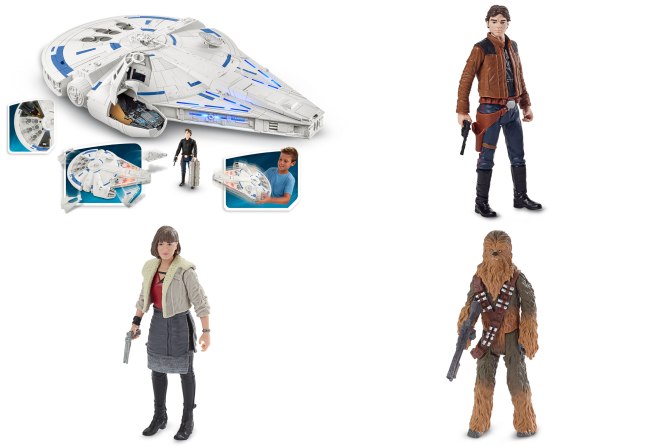 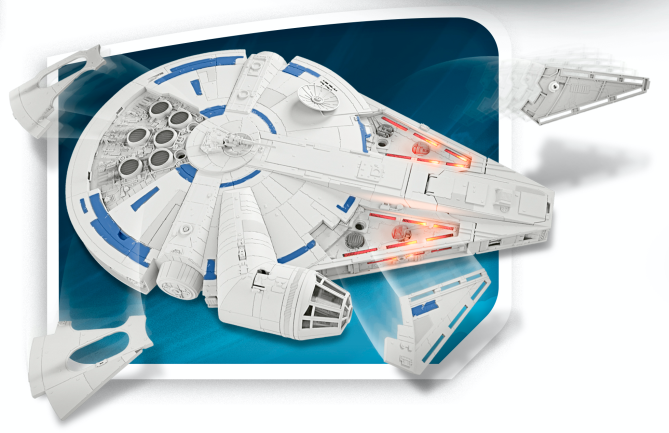 What is interesting, however, are the comments about the nose section of the Falcon. According to Entertainment Weekly (and I tend to agree with their assessment), the nose section clearly pulls out into a smaller ship (much like how the Phantom docks to the Ghost in Star Wars: Rebels). Maybe this section gets lost in the movie? Or perhaps Han just doesn’t see much use in a shuttle attachment once he gains ownership of the vessel. Either way, there does seem to be a definite seam separating the new section and the familiar outline of the classic Falcon, so it will be fun to see what they do with that in the movie (also, take note of the fold-out canons on the sides of the nose section). 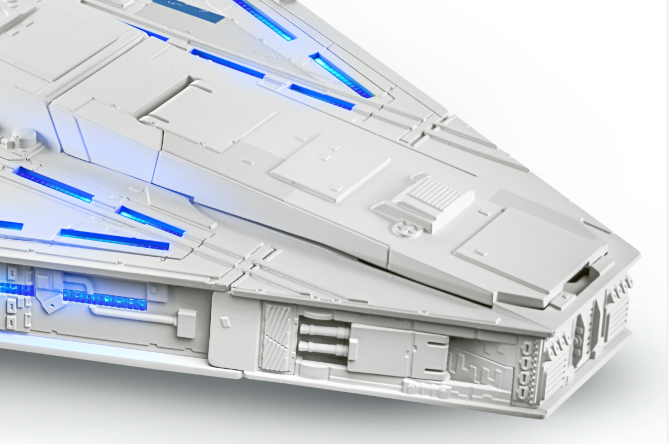 If the nose section of the Falcon does indeed detach to become a separate vessel, the idea is actually not without precedent as can be seen in this never released toy from Kenner back in the mid 1980’s. 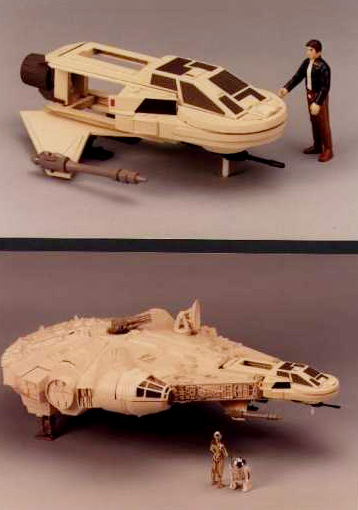 The additional ship, the “F-LER” (freight-loading external rover), was intended to be a supplemental attachment to the Falcon toy, but it never saw production due to the line’s cancellation. There is also some information on the vessel on Wookieepedia (here) that provides an in-universe background for the ship (special thanks to our staff member Chad for this really awesome find!).

And we just got Hasbro’s official description of the Kessel Run Millennium Falcon toy, which confirms that there is a mini ship in front:

SOLO: A STAR WARS STORY 3.75-INCH KESSEL RUN MILLENNIUM FALCON VEHICLE
(Ages 4 years & up/Approx. Retail Price: $99.99/Available: Spring 2018)
Make the KESSEL RUN in less than 12 parsecs with the MILLENNIUM FALCON! Relive the adventure and imagine flying through every obstacle like ace pilot HAN SOLO with speed and action. Fans will experience flashing lights and sounds as they pretend to race along KESSEL RUN. Press the button to pretend that the iconic starship kicks in to hyperdrive with lights and sounds. Press the button a second time for accelerated lights and sounds as well as activate the rumble pack vibrations! Push the button a third time to pretend that your ship picks up even more speed and watch the panels pop off before rumbling to the finish line! Comes with an exclusive 3.75-inch scale HAN SOLO figure and removable mini ship. Both the figure and mini ship are FORCE LINK 2.0 enabled, with phrases and sounds activated by the wearable.

So there you have it.

And last but not least, io9 has a first look at Hasbro’s 6-inch Black Series line. We get to see the new Range Stormtrooper in greater detail and Lando really looks badass. 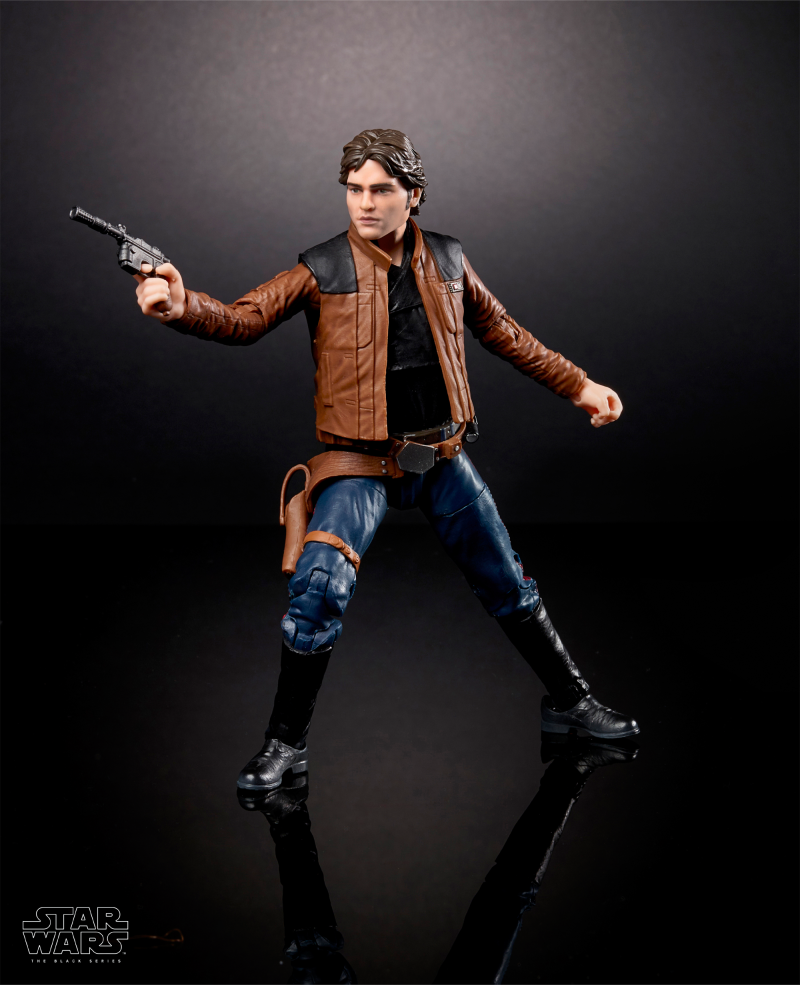 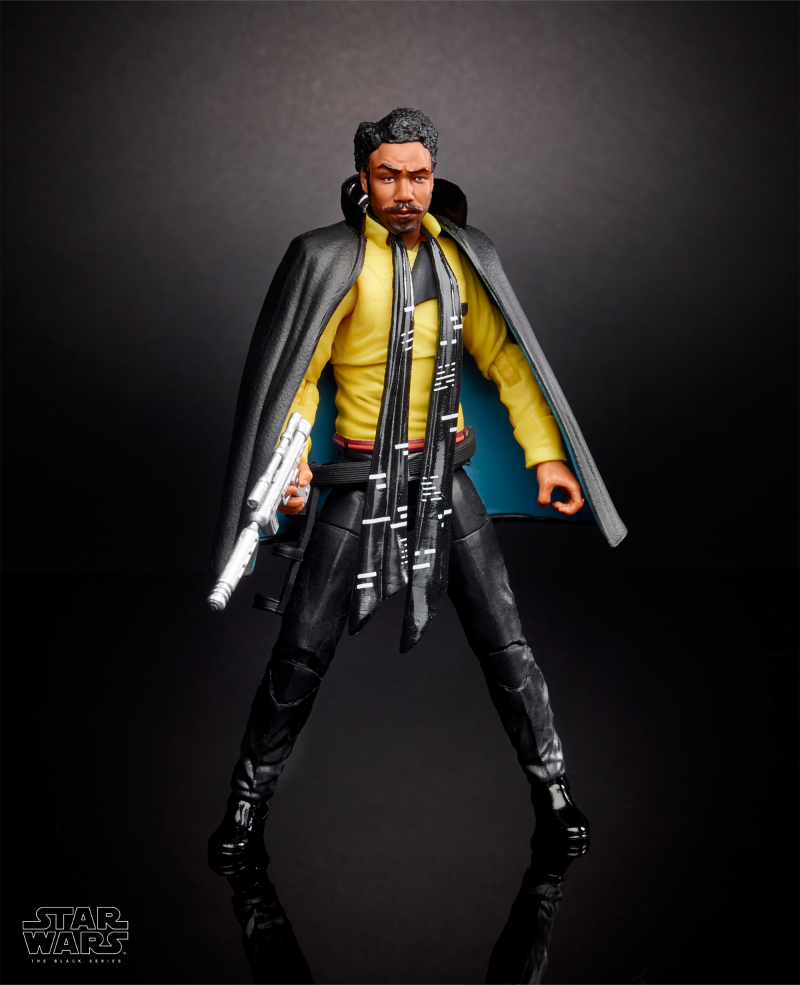 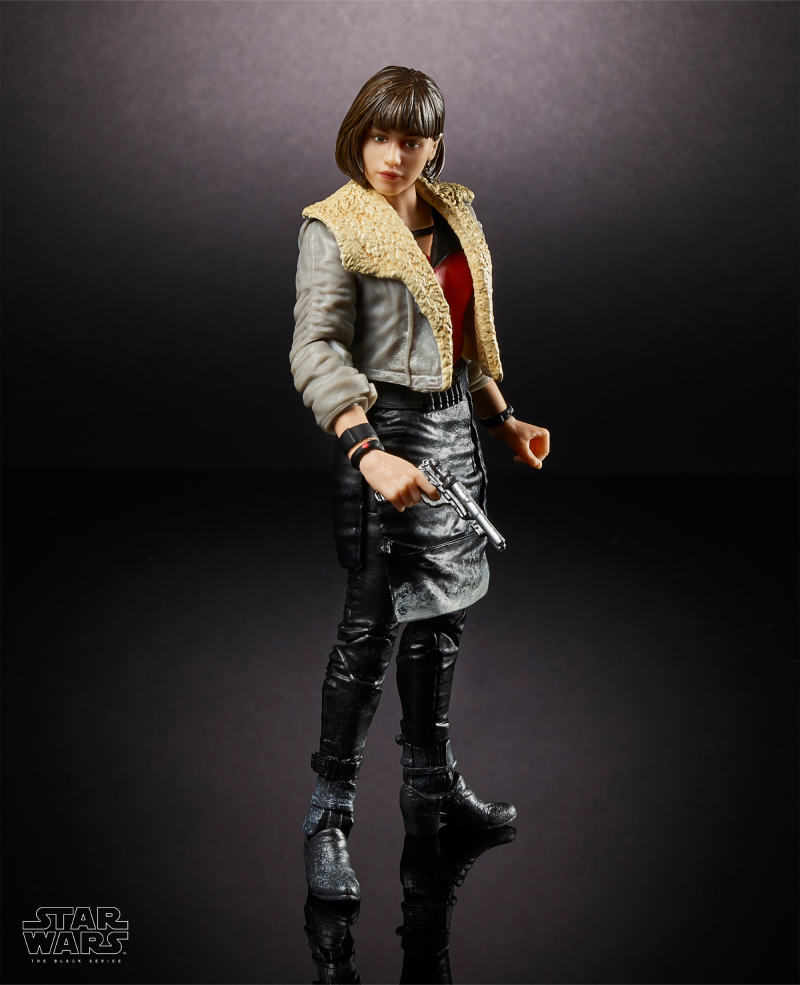 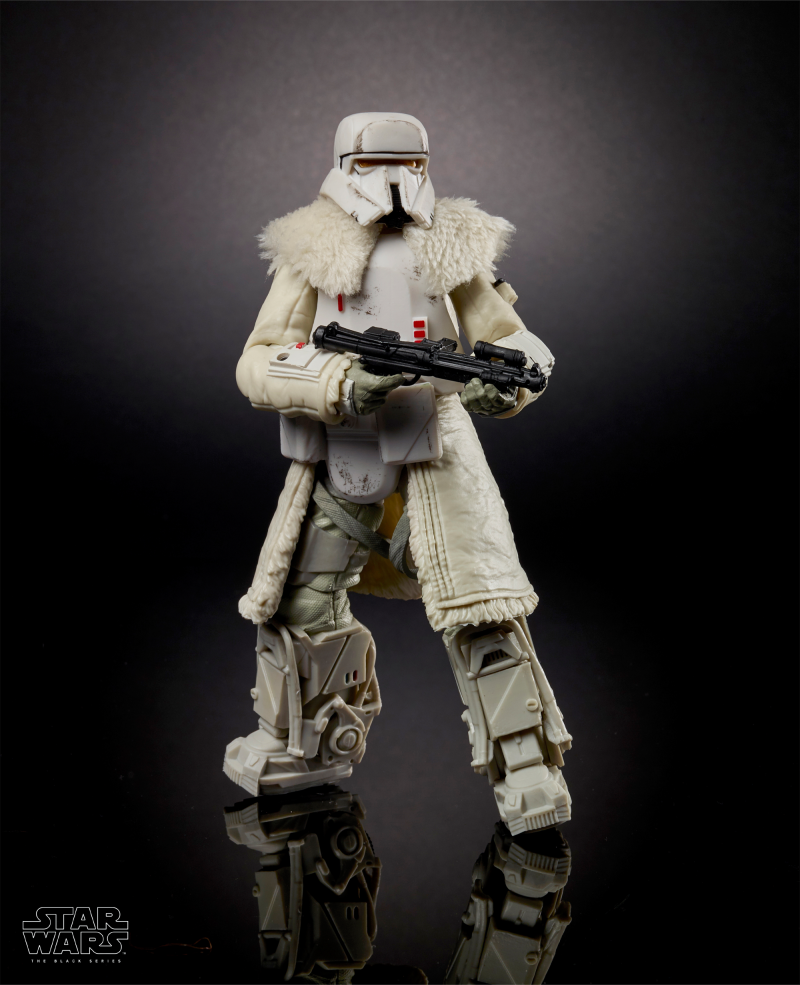 We hope to have more info on Saturday when we will be attending the Toy Fair in New York so stay tuned. 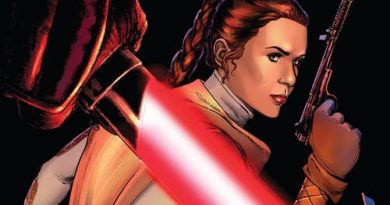 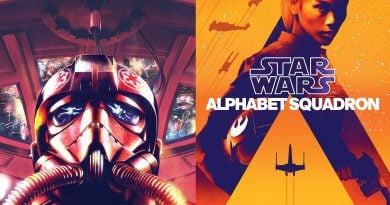 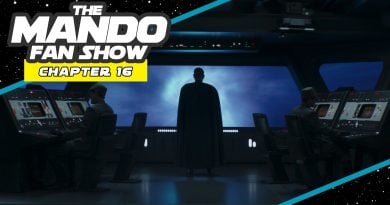