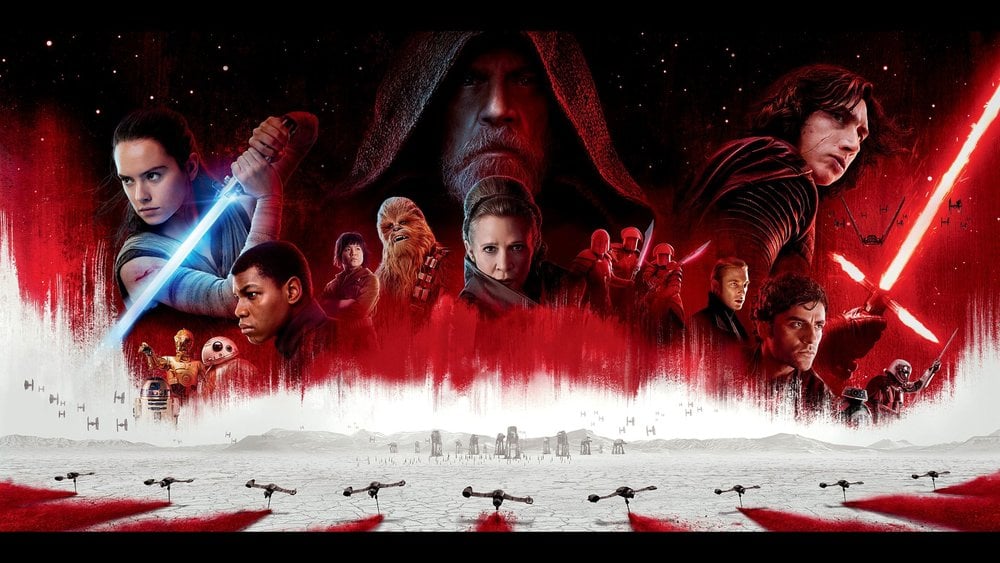 (Beware, this article does not contain spoilers for The Last Jedi, but there might be spoilers in the comments section below)

The time has finally come! You can read our initial spoiler free reaction about the movie after the jump as well as the opinion of other fellow sites. Keep in mind that these are just broad impressions about the movie, but so far the feedback is overwhelmingly positive. The full (again spoiler free) reviews for The Last Jedi will start to hit on Tuesday.

First here’s what our own John Hoey thought about the movie:

Star Wars #TheLastJedi was different, unfamiliar at times, but in the best way possible…one of the most story rich, complicated, exciting adventures we have ever seen!

And some more reactions from other people:

#StarWars #TheLastJedi is AWESOME! I’m overwhelmed with all sorts of emotion on how incredible @rianjohnson‘s movie is! I can’t wait to see it again. Also, PORGS!!!

I just saw #StarWars #TheLastJedi and holy hell is it a masterpiece in a lot of insane ways. I think the standout factor is @rianjohnson’s A+ direction. There has never been a Star Wars Movie like this.

STAR WARS: I LOVED IT THE END

So #StarWars #TheLastJedi is absolutely beautifully shot, hilarious, and full of standout hero moments for everyone. Still processing but it’s (at an absolute minimum) Top 3 Of The Saga

Holy wow. I’m stunned at @starwars #TheLastJedi. An adventure as epic & sweeping as all the other films combined, with laughs, tears, and moments that will make your head pop off. I CARED about this movie. What a great feeling.

Cannot overestimate just how gorgeous this film is. I salute you @rianjohnson – some of these shots are all-timers and then some

You all have no idea what you’re about to see. The saga has truly changed forever #TheLastJedi

There has never been a movie in the Saga like that. Holy wow. @rianjohnson went big. #TheLastJedi

I CHOSE:
HOLY BALLS!!! Rian crushes it. Dear God, I hope I pick this tweet. It means #TheLastJedi made me feel like a kid again. HELLS YEAH!!!

There aren’t enough words to express how much I LOVED #StarWars #TheLastJedi! It is mind-blowing! I’m in geek heaven! pic.twitter.com/unXfYMkIle

IT DOES NOT GET BETTER THAN STAR WARS THE LAST JEDI!!!!!!

Star Wars: The Last Jedi is everything. Intense, funny, emotional, exciting. It’s jam-packed with absolutely jaw dropping moments and I loved it so, so much. I’m still shaking. pic.twitter.com/fHddWjo201

#StarWarsTheLastJedi floored me. @rianjohnson and the team nail so much – thrills, laughs, heart and most of all, pushing the characters/overall franchise a major step forward. Some really rich material to explore in the future. Can’t wait for more.

Guys. @rianjohnson has made the most epic, emotionally powerful @starwars film ever. Hands down. My strong advice is to be very wary of spoilers. The less you know about #TheLastJedi, the better. Bravo, bravo, bravo.

Star Wars: The Last Jedi is so very different, exciting, surprising. So many emotions, so many amazing moments. Stay away from spoilers.

No hyperbole – #TheLastJedi is the best #starwars movie. @rianjohnson and co nailed it

Star Wars: The Last Jedi is a triumph. So many big moments, so much emotion, so much to digest. Had the whole crowd cheering and woah’ing.

There’s a scene in #StarWars #TheLastJedi that I keep playing over and over in my head, that is so stunning and unexpected that I don’t want to forget how I felt seeing it for the first time. This movie feels unlike any other Star Wars movie in all the ways I hoped. pic.twitter.com/zlDW4yOjp2

I am STUNNED by #StarWars #TheLastJedi. I gasped, I laughed, I screamed, I cried and I had the time of my life. Rian Johnson pulled it off, making what might be the best Star Wars movie ever. pic.twitter.com/0VE5M90dsH

No hyperbole – #TheLastJedi is the best #starwars movie. @rianjohnson and co nailed it

Every single shot serves a purpose and #thelastjedi is easily the funniest #starwars film. And that is a fantastic thing.

THE LAST JEDI: A little too long & dragged in the middle, but great fun overall! As good as The Force Awakens; Rogue One is better! More humor than expected, great #StarWars moments, #MarkHamill is awesome! A worthy Episode VIII pic.twitter.com/HHihSa788D

Massive congrats to my friend @rianjohnson for the dazzling writing and directing work he shared tonight! Yes, a great chapter of a blockbuster franchise, spectacular and unpredictable, but also his own voice shining through… kudos!

Impressed with #StarWars: #TheLastJedi. It makes some big, impressive and surprising moves that I definitely didn’t expect. Not all of the plot stuff is exactly perfect, but the character work is once again fantastic, and it’s just amazing to see Luke Skywalker back in action.

The Last Jedi is incredible. Character at the forefront, amazing action and so so so much emotional payoff decades in the making. I will be watching this one a lot. pic.twitter.com/KVOjLhwk27

There will be nitpicks, but #TheLastJedi is an excellent #StarWars movie.

Wowww #TheLastJedi So much to process/ think about. But I am FULLY in love w/ a character arc I didn’t expect.

#TheLastJedi  is going to spark much more debate amongst fandom than TFA. It’s good! But there’s a bit more fat than we’re used to in non-prequel Star Wars films.

#StarWars: The Last Jedi is so beautifully human, populist, funny, and surprising. I cried when one POC heroine got her moment because films like these leave their mark on entire generations — and representation matters

THE LAST JEDI has more goosebump moments than any Star Wars movie I can remember. I was grinning for most of the 2 and a half hours. A worthy and great Star Wars film. The franchise is in great hands. Kudos to @rianjohnson

It’s AMAZING. Just amazing. Have a lot to process, but WOW. #lastjedi

Luke was right: “This is not going to go the way you think.” #TheLastJedi will shatter you – and then make you whole again. pic.twitter.com/PJyYpH5loP

We have yet to find any negative comments. This is going to be truly amazing and obviously not going the way we all think.