Times have changed, but as Shmi Skywalker told us, “You can’t stop the change.” Whether we like it or not, we live in an age of immediate access to information, and everybody has a platform to speak their mind and showcase their opinions about anything and everything. This also applies to movie ratings. Sites like Rotten Tomatoes allow consumers to create profiles and vote on films in what is then aggregated as the “Audience Score” of a movie. But why are we so obsessed with movie scores? Is it some deep-rooted sense of justifying our fandom? If our favorite movie gets slammed in audience polls, does that devalue me because I am a fan of it? It is an interesting phenomenon that has taken fans of movies by storm, and the latest headline maker for this is Star Wars: The Last Jedi. So let’s try to make sense of it all. 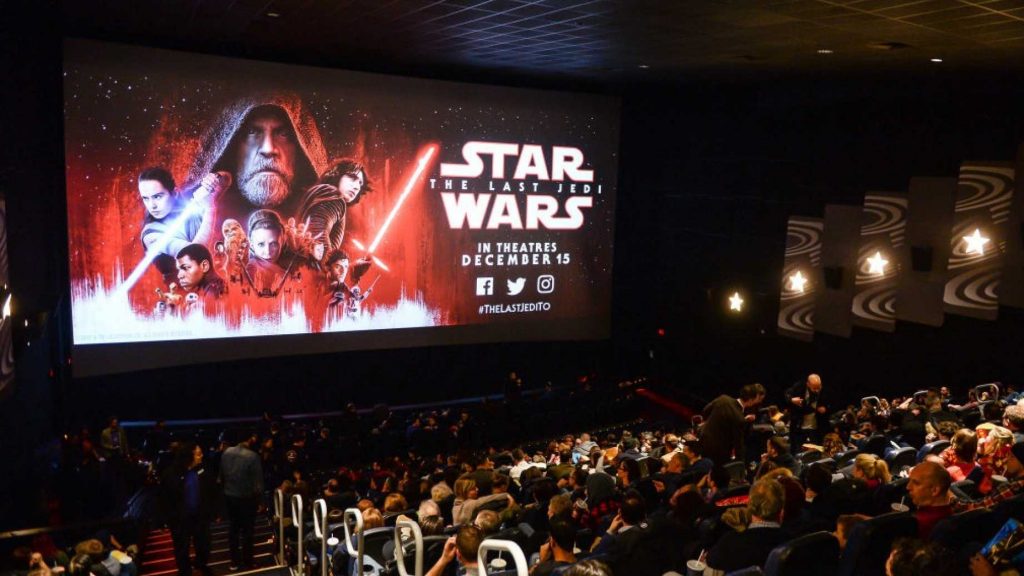 There is no doubt that The Last Jedi has had a wide range of mixed receptions since its release in theaters a week ago. Film critics overwhelming lauded the film, with over ninety percent of critics giving the movie a positive review. The real bombshell struck when arguably the most popular movie review website, Rotten Tomatoes, began seeing a huge dive in its “Audience Score”. This score is an average score of reviews comprised by ratings submitted by users over the internet, where the only requirement for submitting a review is creating a login account. Thanks to James Shapiro of birthmoviesdeath.com, we can get a better idea of the specifics on the votes submitted for The Last Jedi by the non-critic public. 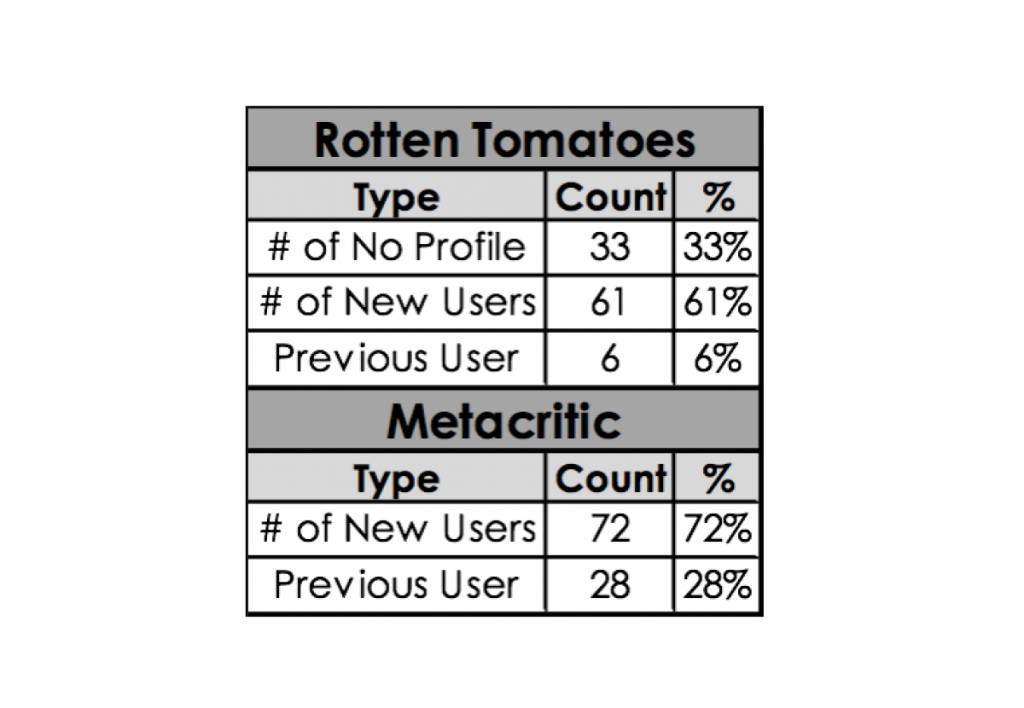 As Shapiro points out, only six percent of the votes cast for The Last Jedi on Rotten Tomatoes were cast by people with an existing account, with 61 percent showing as new accounts, and the other 33 percent of accounts were deleted after their review was posted.

“(T)here were a lot of respondents who signed up to review The Last Jedi and with Rotten Tomatoes, and a third of the respondents deleted their account or had their account deleted after registering. This suggests an effort was made to create a negative self-selecting bias because these new users chose to register with the site just to have their review counted in the overall Rotten Tomatoes and Metacritic score for the title.”

Logic would point us to someone creating an account just to rate this one movie.

Now Shapiro moves on to the company called comScore, which performs opt-in exit polls for movies. This means people leaving the theater are asked to participate in a poll and they agree to participate. conScore will survey 1,000 people in 20 different markets, to gauge the public’s pulse on how they feel about a film. Let’s see how their positive statistics for The Last Jedi matched up against The Force Awakens and Rogue One: 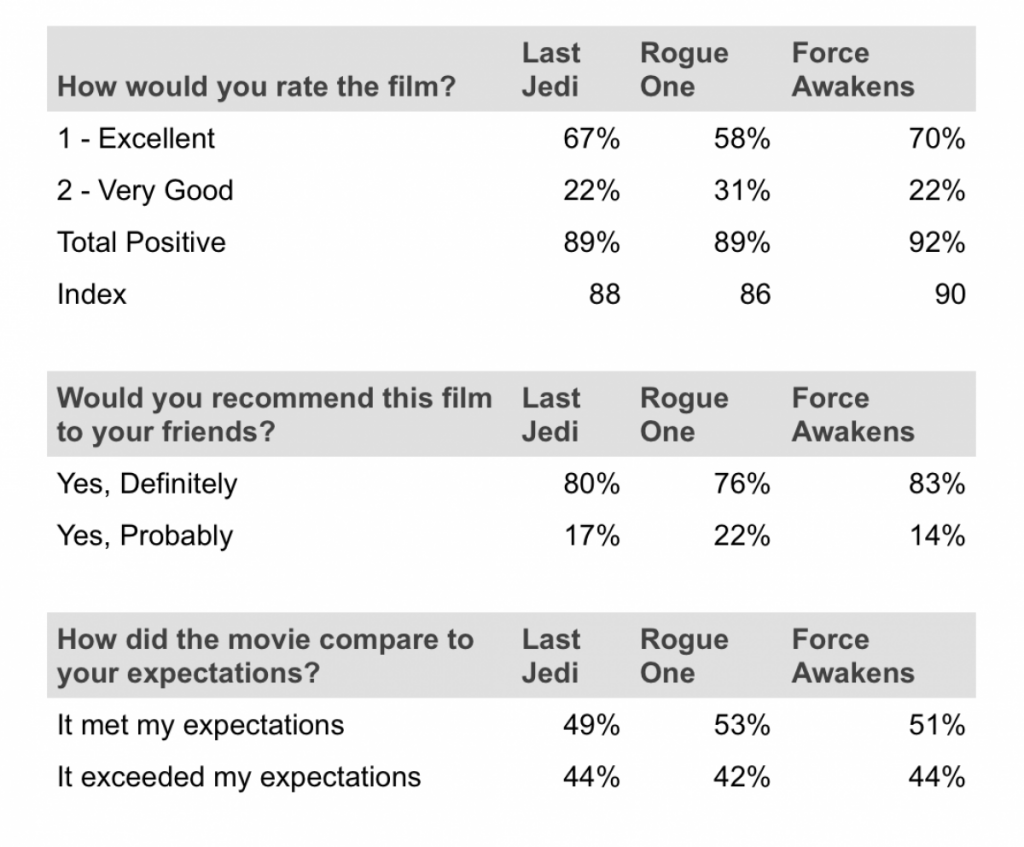 As you can see, all three movies are pretty close to one another, with Rogue One receiving the least favorite (but still incredibly positive) percentages of the three. I made a chart extracting the positive comparisons for all three movies, including the Rotten Tomatoes scores as well. It’s crazy how close The Last Jedi and The Force Awakens are across the board, but it is quite curious how way off-kilter they are in one specific score:

After reviewing this, just from a logical standpoint, would it be fair to assume that there is something strange going on in regards to the Rotten Tomatoes audience score for The Last Jedi? The site released a statement saying that nothing was tampered with in terms of bots or auto-voting, but that does not mean people didn’t galvanize and voluntarily bombard the site with new profiles and negative reviews. To put it in perspective, Tommy Wiseau’s The Room has a 46% rating on Rotten Tomatoes audience score, only seven points lower than The Last Jedi, and there is no scene with Kylo Ren and General Hux randomly throwing a football around behind a building in tuxedos.

Our 5,000 votes also fall in line with comScore’s results. Now some may look at this and say that those are all die-hard Star Wars fans who will overwhelmingly rate it highly. Okay, and that is fair. But we’ve also noticed that a major amount of comments we receive on our articles about the film are extremely negative, which leads us back to the subculture of public opinion.

For whatever reason, negativity finds its way to the forefront. Perhaps contentment doesn’t inspire people to project their opinions unto others. Maybe if you like something you are satisfied and less inclined to express it outwardly as you might if you were upset. When people enjoy a meal at a restaurant, they don’t always find the manager and thank him, but if their dining experience was horrible, they likely would, in addition to possibly writing a harsh review on Yelp or Google. It often seems if something bothers us or triggers a negative reaction in us, there is an inherent spark to let it be known. There are way more scientific-social studies about this phenomenon beyond our pay grade, but you get the picture.

I didn’t write this to convince people how to feel about The Last Jedi, but more to put the headline-grabbing and public obsession we have with movie scores and ratings on websites into perspective. Whether you liked Rian Johnson’s entry into the Star Wars saga or not, it seems abundantly clear that it took on a massive wave of dissent on a rating platform that may need to rethink it’s regulations and requirements.

But we the public, as individuals, also have power too! We can all take a step back and do what previous generations did and just not care what other people think, to think for ourselves, and decide whether we like or dislike a movie, which should be enough for all of us. 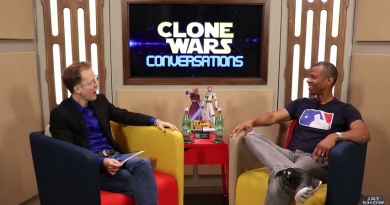 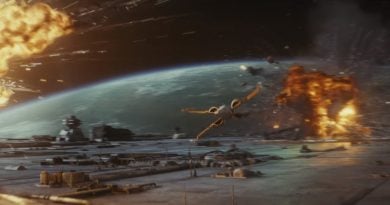 606 thoughts on “Star Wars: The Last Jedi and Our Obsession With Public Movie Ratings”