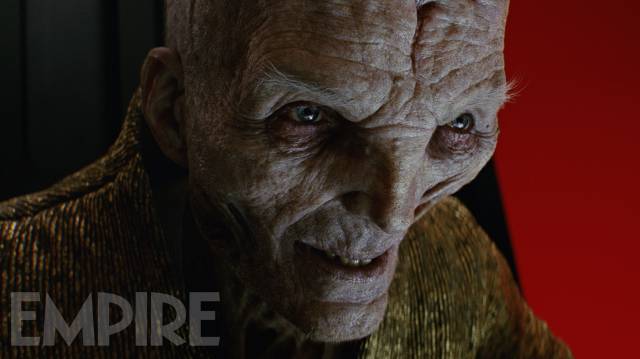 Yesterday Empire revealed their new covers for their special The Last Jedi issue. In the preview we glimpsed a new shot of Supreme Leader Snoke. Now the British magazine shares the high quality of this image, plus a few words from Andy Serkis about the mysterious villain.

“Snoke is bloody dark; way darker than Palpatine,” Andy Serkis tells us in the new issue of Empire. “He’s riddled with this osteoporosis so his body’s twisted, like a corkscrew. He’s incredibly damaged, so there’s a bizarre vulnerability about him. Beneath that vulnerability, though, is this intense hatred.”

“He’s definitely not a Sith, but he’s certainly at the darker end of the Force. Without giving too much away, that begins to unfold a little in this one.”

You can read the full interview with Serkis in the January issue of Empire, on sale tomorrow November 30.