This week we have lots of interesting topics to discuss. Read on for the latest development around Daisy Ridley, a few hints about new Lucasfilm animation show, some insight from Pablo Hidalgo on the rumor that there will be a Han Solo trilogy and more…

First we start with the development around the sad news that Daisy Ridley has deleted her Instagram account. This happened shortly after the actress posted a statement against gun violence after the Teen Choice Awards, which made some people leave not so pleasant comments to her post. Here’s what she said:

Thinking about how lucky I am like… Serious bit: as I sat in the audience yesterday tears were streaming down my face at the tribute to those that have been lost to gun violence. I didn’t get a great picture of the incredible group that came onstage but they were so brave. It was a true moment of togetherness. We must ‪#‎stoptheviolence‬.

Then came the backlash which we can’t quote here since the Instagram account is no longer active.

While stars often abuse their platform in the spotlight to push their own political agendas, we at Star Wars News Net do not believe that was the case here. Like all of us, Daisy is a human being and was simply expressing her own humanity in her post. Regardless of one’s stance on gun control or police brutality, any loss of life is a tragedy, and to berate someone for expressing their heartfelt sadness over such a tragedy is beyond comprehension. To put it bluntly, we are embarrassed for these thoughtless individuals and question their own connection to humanity.

She also got support from her colleague and friend John Boyega, who was asked by fans to convince Daisy to join Instagram again:

Later Daisy reactivated her account just to post one message and then deleted it again (via Imgur): 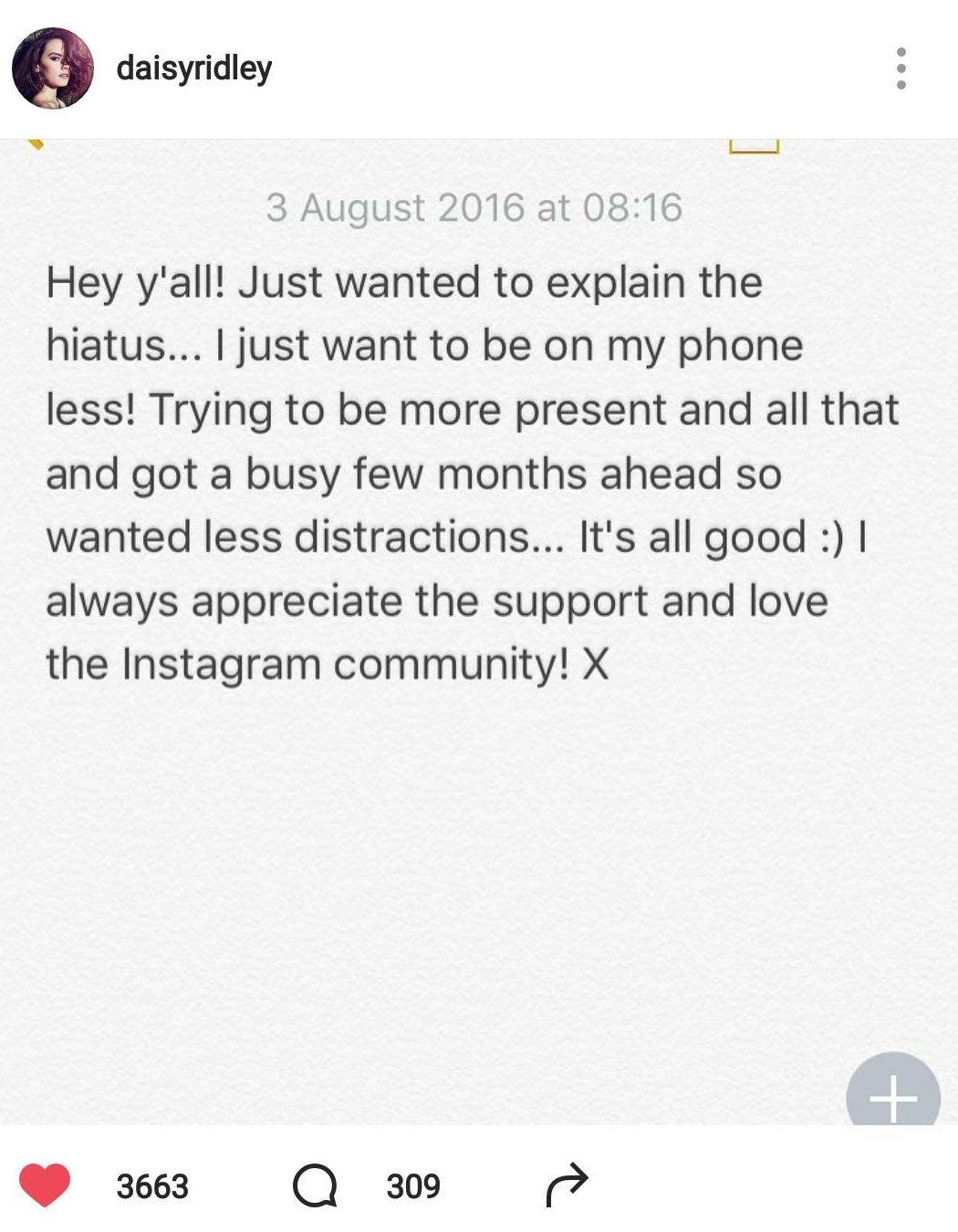 And to support Daisy’s words it was just revealed that she signed to star in the post apocalyptic thriller Chaos Walking, directed by Doug Liman. (via Variety):

“Chaos Walking: The Knife of Never Letting Go,” published in 2008 as the first book in a trilogy, is set in a dystopian world where all living creatures can hear each other’s thoughts.

The book is centered on the only boy in a town of men, who makes a startling discovery that forces him to flee with only his dog in hand. With the townspeople in pursuit, the duo stumbles upon a strange and silent girl. They set off on a white-knuckle journey in which the boy must unlearn everything he knows in order to figure out who he truly is.

Daisy has been a constant breath of fresh air on social media, and we are sad to see her close her account. While her response to the Instagram community about why she closed her account may have just been a way to smooth things over, we remain hopeful that she will return once again in the future to bring a little more sunshine to us all. Until then we can at least enjoy her posts over to her Facebook account, which is still active.

Animation TV writer and creator Jennifer Muro posted some curious tweets hinting at a future involvement with Lucasfilm. Later she removed some of them but you can see the text below.

Lothcat’s out of the bag. Bottom line: it’s a new thing & I’ve taken my first step into a larger world. #Lucasfilm pic.twitter.com/tet6ZkHb4o

4those privately asking about Lucasfilm, yes I’m the writer & no it’s not something on the air now. That’s all I can say! & Thx 4all the❤️!

@TheEricGoldman Thanks so much! It’s going to be something new and different and I can’t wait.

Muro worked in the past on animation TV series such as Care Bears, Sponge Bob, Dora the Explorer and many more. It’s clear that her involvement with LFL will be for an animation project. Her tweet also confirms that it’s a new show, so we can exclude Rebels. Also making an animation show for Indiana Jones, before the franchise is reintroduced with the new movie doesn’t make sense at all. So our best guess is that she will be involved with new and different Star Wars animation show. Can’t wait for that!

We’re getting closer to the new canon novel about Grand Admiral Thrawn by Timothy Zahn due to release on April 11. 2017! Now you can pre-order the book.

Guess what? #StarWars #THRAWN by Timothy Zahn is finally available for preorder. Follow here for ALL the links: https://t.co/NujV1QvqIe

The cover for Jason Fry’s Rogue One: Secret Mission fact book has been revealed:

Some Rogue One Black Series figures have been spotted. Here’s a first look at 2-KSO, Captain Cassian and a Death Trooper:

New fantastic The Force Awakens image by Andree Wallin, showing an early concept art of the Resistance base:

A super early concept of the resistance base hangar for The Force Awakens. #starwars #theforceawakens

3PO is honoured by ANA’s new plane. Tho not keen on space travel, he does look forward to flying this elegant craft. pic.twitter.com/Laai6NyZbV

The new Star Wars Insider is out, featuring an article on Rey by Tricia Barr:

It’s not that your Snoke theory actually sucks, it’s that you’re looking to me for some form of validation that you know I can’t give you.

On if there is going to be a Han Solo Trilogy:

@bryanbleano No one’s said anything about a trilogy. Stop panicking at what the Internet baits you to click.

On who is the source of the stand-alone movies currently in development:

From last year’s Future Filmmaker panel. The standalone ideas in development came from George Lucas, the exception being Rogue One. FYI

I still wonder if the third stand-alone movie is indeed currently in development, or perhaps they are waiting to see how Rogue One is accepted and decide which way to go after that. As you know the third “A Star Wars Story” movie is expected to be released in 2020 and it is supposed to be the movie that Josh Trank was hired to do.

On who is making the creative calls:

On who are the villagers at the beginning of The Force Awakens:

@TheDailyMiks They’re a spiritual enclave but I don’t think they’re part of the Church. Lor was.

On the role of the original cast in The Force Awakens:

@Galactic_Kark That was the function of 7. To use the familiar to launch the new. With that our of the way, I hope you like what’s next.

Well, this rule surely doesn’t apply for Luke. We will definitely see more from him in Episode VIII, but probably it won’t be too much. 🙂

On the fans’ casting desires 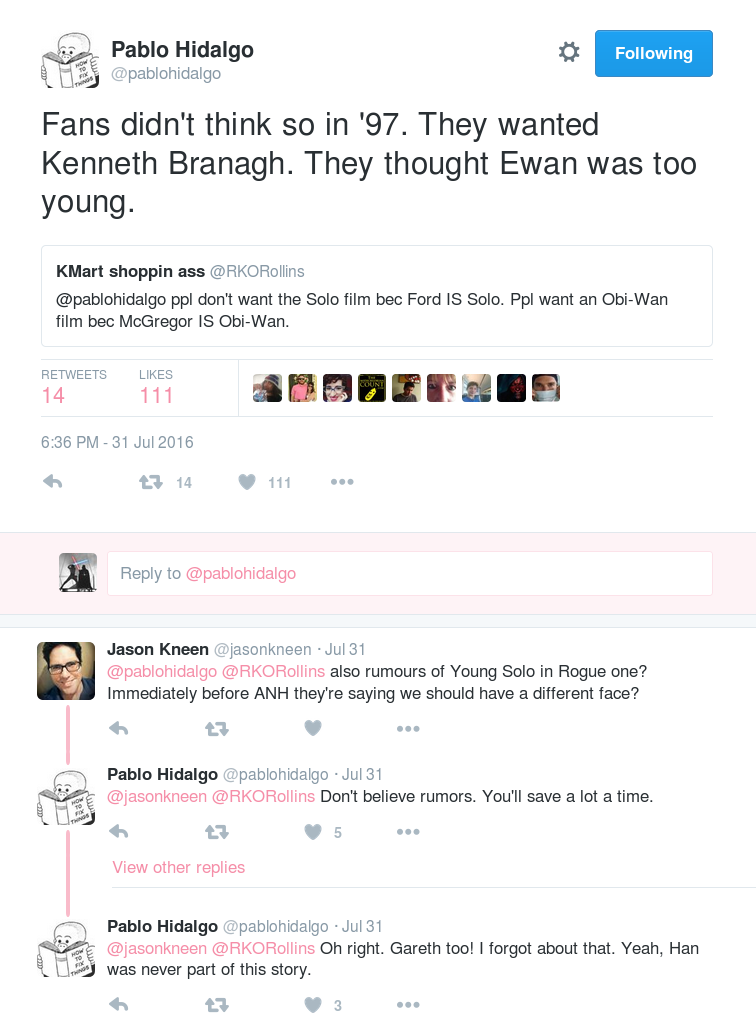 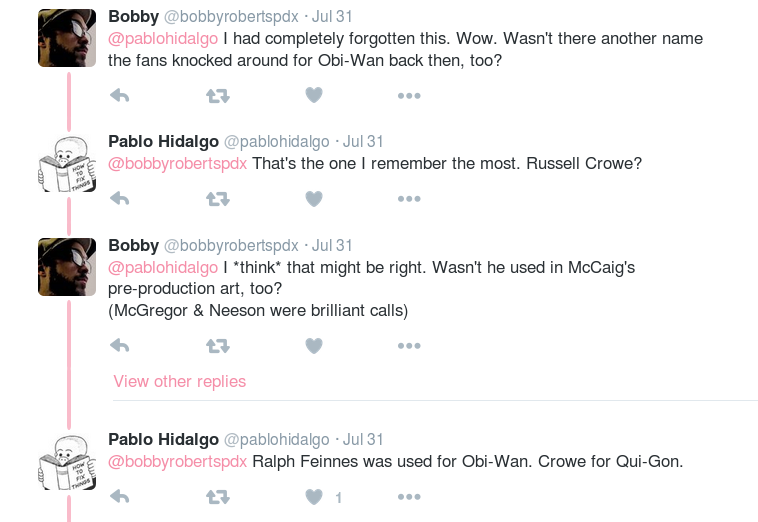 @pablohidalgo @RKORollins what does that have to do with anything? Ewan McGregor is all about reprising his role and fans want it..

@JacksonEmphasis @RKORollins No idea what one has to do with another. People seem convinced the Solo movie took Kenobi’s parking space.

On the progression of the design between the OT and the PT:

The disparity of design in the prequels vs the originals isn’t about tech level. It’s about culture. pic.twitter.com/hXQQnGb3bs

In case you’re confused, here’s an explanation (although I think it was pretty clear). 🙂

@derekjohnsonsim huh? I was explaining something to people who didn’t understand the progression of design.

@derekjohnsonsim it’s a 30s car from a handcrafted age vs. a machine stamped car from an automated age. That was the point.

@derekjohnsonsim I am saying the beautiful design is from the prequels. The prequels are the Dusenberg. The classics are the Yugo.

Special thanks to 1030th General Rieekan from the Cantina forums for always being an incredible help with the tweets!