There's Been an Episode VIII Wrap Party in London! Have You Felt It? - Star Wars News Net Go To Top
Skip to content 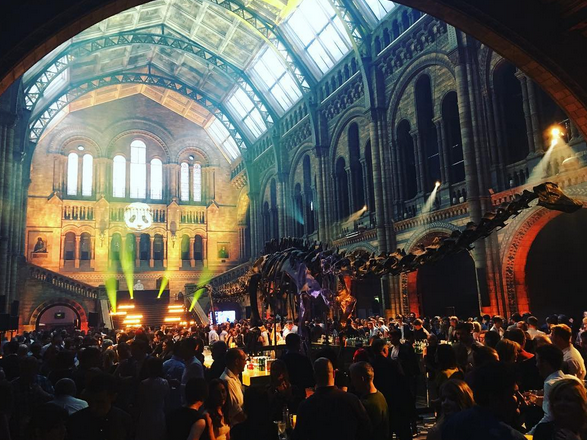 While there still might be some minor Episode VIII filming happening in the next days, principle photography for Star Wars: Episode VIII is now officially finished. To celebrate the event, cast and crew gathered together for a special party yesterday at the National History Museum in London. Hit the jump for several photos from the event.

Two weeks ago Mark Hamill posted on Twitter that Episode VIII filming will end on July 22. Yesterday the actor posted another tweet revealing that filming has already wrapped.

Very often wraps happen before the last days of shooting, since it’s based around the leads. It’s possible that some minor filming might take place in the following days, but the main job is done.

Here are several photos from the event that we managed to find on Instagram. Seems like it was a lot of fun.

At home buzz before the wrap party! Another chapter done. Although this is the second time it still feels surreal being involved in such a life changing project. As I go onto other movies I take with me great memories! #Oneisfeelingonesself P.S. To everyone that has supported me since attack the block I thank you for encouraging me! This new life is tricky to take in but it’s always nice to have people route for you. LOVE!❤️

So, to avoid the Internet cafuffle of ep7 where I posted a bajillion pictures and people started speculating about the involvement of certain actors etc, THIS time, I’m just going to post this short lil amalgamation of a few pics. I’ll post one more grouped image like this. One thing I will say about the night…wow. #StarWarsEpisode8 #wrapParty #rianjohnson #DeeTails #MN8 #ArtiShah #Cratinus #MazKanata #GwellisBagnoro #MarkHamill #elliegoulding #naturalhistorymuseum

Expectedly Mark Hamill was the most wanted cast member for selfies.

What I remember most from ALL the #SW movies? The PEOPLE!!! (who were like family) Let the #SelfieParade begin! https://t.co/LfCSL9dc0e

So great to meet #Ep8 crew’s Wives-Husbands-BFs-GFs-Partners etc. Selfies are so much more personal than autographs! https://t.co/Y71yPQVJbI

Some shares from Pablo Hidalgo as well, who is already in London.

At a soirée in London when this dapper fellow appears: pic.twitter.com/SvTVm9Bd2v

France may have lost, but meanwhile at the Star Wars VIII wrap party… pic.twitter.com/e8TukSYWZc