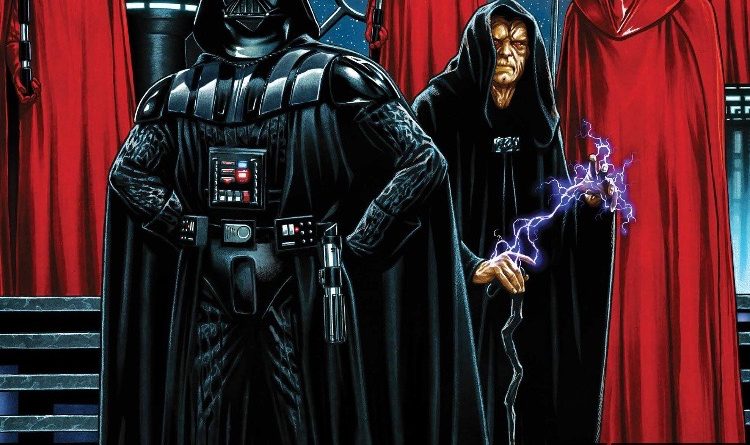 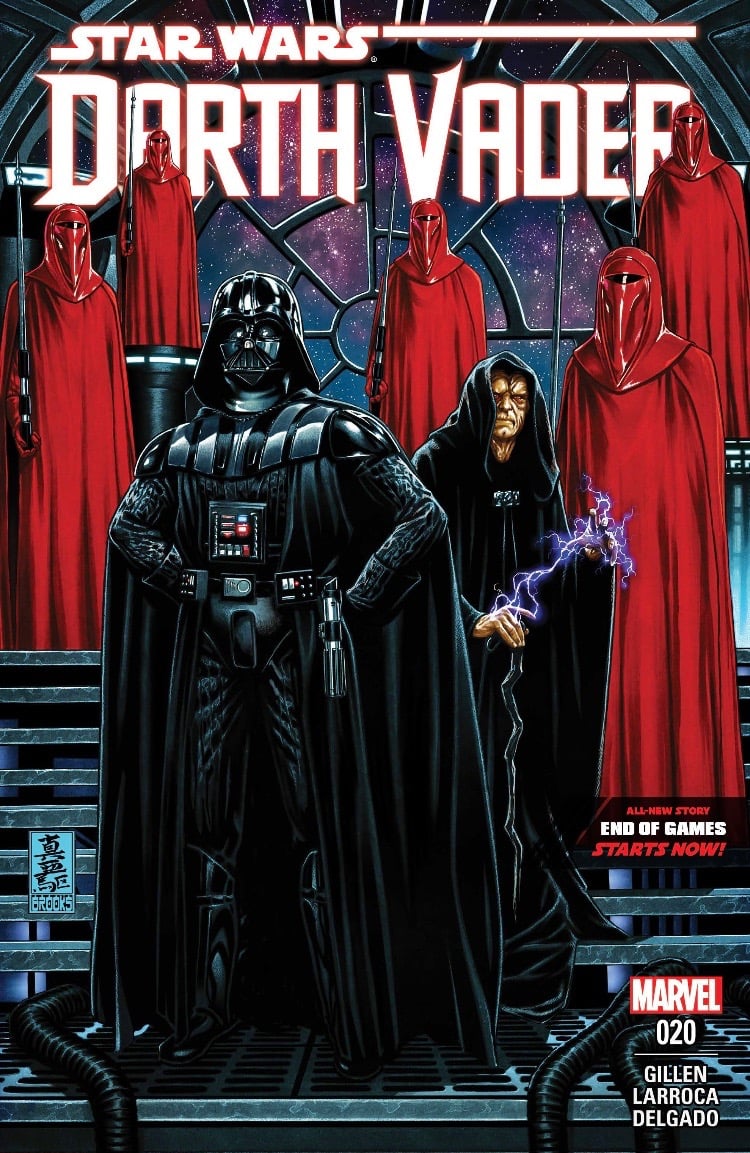 This week we begin a new arc in the Darth Vader series, End of Games.  If you’ve followed Vader for the past year you know that the Dark Lord has been dealing with some awfully pesky cyborgs.  As the arc’s title would hint, we appear to be at the beginning of the end for the cyborg adversaries.  Even if you have been reading every issue, you may have some questions about the origin of the cyborgs and their creator, Cylo.  After this first issue, I’m quite sure we will be getting all the answers concerning this particular batch of cyborgs.  SPOILERS AHEAD…

Darth Vader has become custodian to the two droids, Bee Tee and Triple Zero, of the still missing Dr. Aphra.  These two droids don’t just sit idly by taking hot oil baths, Vader has put them to work.  The devious, robotic duo are doing a pretty good job helping out the Dark Lord as we rejoin them on the bridge of a Star Destroyer in transit to meet the Emperor.  Vader is already planning to meet up with Inspector Thanoth after the Emperor, so I don’t think we should count on this next arc staying on one place.  I think we are back to the star system hopping Vader we met in the first arc. 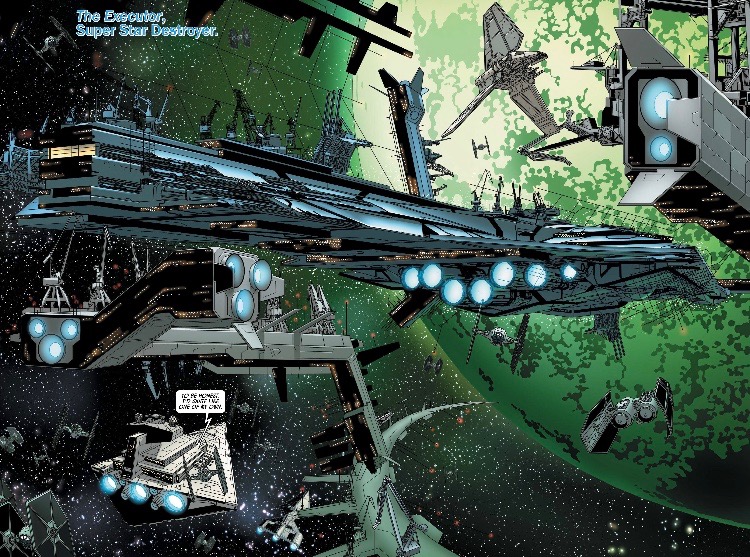 Well, now, that’s pretty cool.  The Emperor is hanging out on what will eventually be the Executor.  We’ve seen Death Star(s) under construction, but I don’t think we’ve seen a Super Star Destroyer in the midst of assembly.  Looks like quite an undertaking.  The Empire isn’t exactly licking their wounds after their defeat at the Death Star.  Bee Tee states that, at this point, the Executor is Tagge’s new flagship.  Of course we all know who eventually gets the Executor as their flagship, so to me that puts Tagge in the “days-are-numbered” category.  For the time being, the man who calls every ship in the Imperial Fleet his flagship, Emperor Palpatine, awaits a meeting with his apprentice.

You want answers?  Well, then you came to the right Super Star Destroyer.  As soon as Vader makes his way into the Emperor’s mobile throne room the Sith Master barely shuts up.  We learn some pretty interesting things about the Emperor’s view of himself.  He speaks pretty bluntly about why the Sith have been hiding since their war with the Jedi.  Palpatine seems to think of himself as the end result of generations of the no-more, no-less than two rule; and that because of that, he is the only one of the Sith who does not fear the Dark Side.  There is some really crazy stuff in these Palpatine ramblings.  I won’t spoil it here, but let’s just say the Sith’s relationship to the Force sounds a lot more complex than simply Dark or Light sides.

Over the past year of following this comic we’ve seen Vader slowly take his lightsaber to each of the cyborgs Palpatine commissioned through his mad scientist, Cylo.  Well, Cylo built his first cyborg after a fateful battle between a Jedi Master and freshly recruited Sith Apprentice on a planet called Mustafar.  That’s right, Cylo is responsible for saving Darth Vader/Anakin Skywalker’s life.  After that time, the Emperor was intrigued with Cylo’s abilities, but as his confidence was placed in the scientist, Cylo grew very arrogant.  Instead of letting Cylo go, the Emperor manipulated him into trying to create cyborgs that would rival Vader’s abilities, but as we’ve seen, that failed.  Cylo is now off the radar and after a tense discussion, Palpatine sends Vader out into the galaxy to track the scientist down.

Before Vader goes hunting for Cylo, he needs to follow up on a lead to Dr. Aphra via our old friend Inspector Thanoth.  Thanoth is no one’s fool and he knows there is a great deal of risk in giving up his hand to Vader.  My big complaint about this issue is the bizarre turn Thanoth took to put himself in this vulnerable position.  The character always struck me as someone very intelligent, very analytical, and very aloof.  I’m still scratching my head a little after a few reads.  Perhaps the series’ writer, Kieron Gillen has characters that are better suited for this turning point arc and he wanted to tie-up the inspector’s story.

No love is lost between these two.  To give Thanoth some credit, the inspector doesn’t change his cool disposition in the least as Vader holds the crimson blade to his neck.  I imagine most folks during that time period of SW would be trembling or worse.  Inspector Thanoth knows where Dr. Aphra is, but he has a few words for Vader first, as he is pretty sure he won’t have any words for anyone once he gives up Aphra’s location.

Thanoth is a true believer in the Empire and believes it is bigger than one emperor.  I’ve been enjoying Claudia Gray’s excellent Star Wars novel, Bloodline, this past week.  If you’re unfamiliar, it takes place six years before The Force Awakens, so there are some interesting insights of how a generation away from the Empire’s downfall view the Empire.  There is a main character in the book who despised Palpatine/Vader, yet thinks the concept of an empire over a republic is a good one.  Also, in last week’s Poe Dameron, we heard Captain Phasma scoff at a comparison made between the First Order and the Empire.  Where I’m going with all of this is that Thanoth seems to be along that trajectory.  The idea of empire is something greater than the Empire, and Thanoth feels Palpatine has placed himself in an ivory tower of sorts, above even the Empire itself.  I’m loving the different mindsets of Imperial officers the Vader series has given us.  This absolute devotee presents himself as a cold investigator, but once alone with Vader, opens up about his passion for the greater notion of empire.

It’s time for Darth Vader and his droid minions to go their separate ways.  Bee Tee and Triple Zero will go track down Aphra from Thanoth’s lead and Vader is off to deal with Cylo.  We find out that the droids are not going alone, but it should be interesting to see how they operate when left to their primary devices of torture and murder.  I’m also intrigued by the promise of Vader’s one-man hunt in his TIE Advanced x 1.

There is a short story after the conclusion of issue #20.  It concerns the origin of Bee Tee and Triple Zero.  Bee Tee discusses it to a droid mechanic while the mechanic is giving him a tune-up.  Who knows if we’ll see more of these misadventures, but it was amusing enough.

I’m not sure if I’ve already said this in an earlier review, but I’m quite over Cylo and these cyborgs.  Vader is solid pretty much every issue.  I suppose this new arc is Gillen trying to bring this cyborg issue full-circle, so I’ll try to contain my disappointment that yet again we will see Vader dealing with this repetitive problem.    The revelations by Palpatine in the beginning of the issue make me hope we will be exploring Sith lore through his verbosity, but I’m sure it will be delivered in small doses.  Maybe we’ll finally get some stories behind all those artifacts on Palpatine’s private ship we were teased in Lando.  This is a good issue, and despite the unwelcome storyline of hunting down Cylo, I feel End of Games will offer us some of the good stuff we’ve come to expect from Darth Vader. 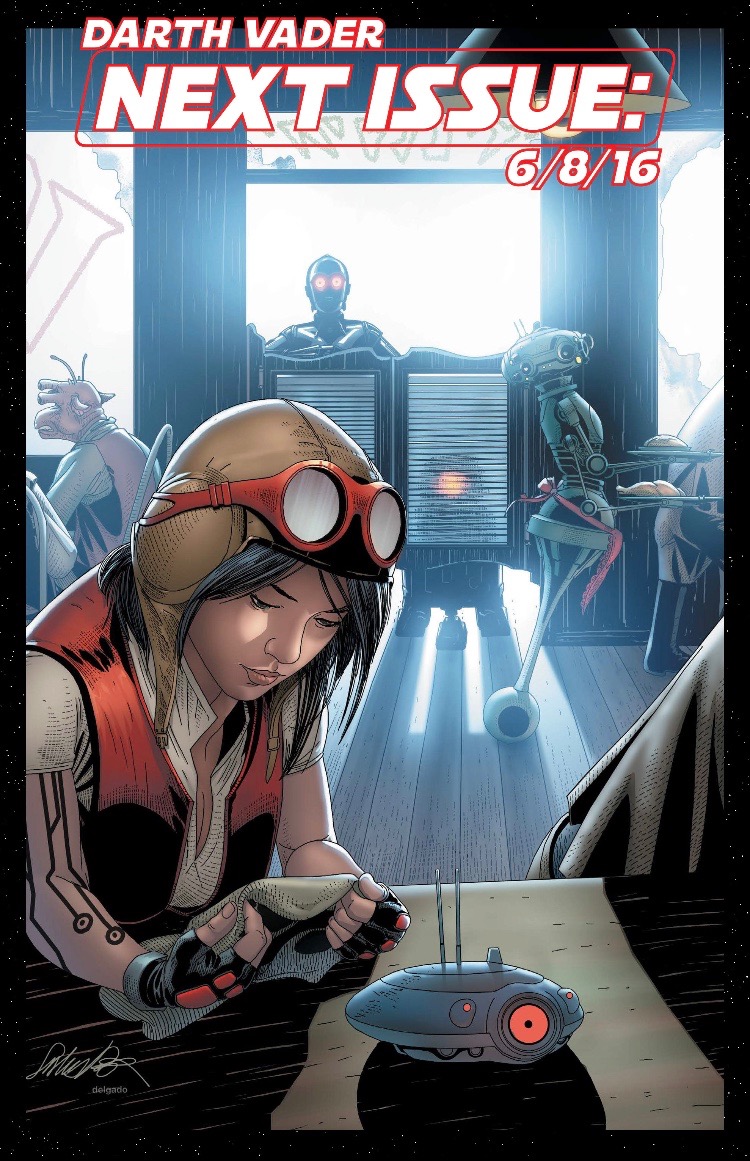 Look for this issue at your local comic shop or purchase digitally through comiXology. 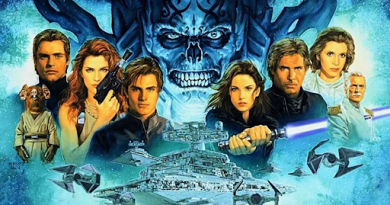 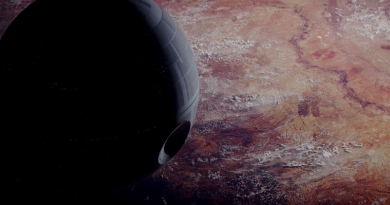 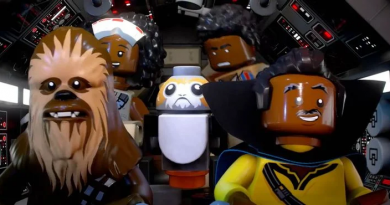