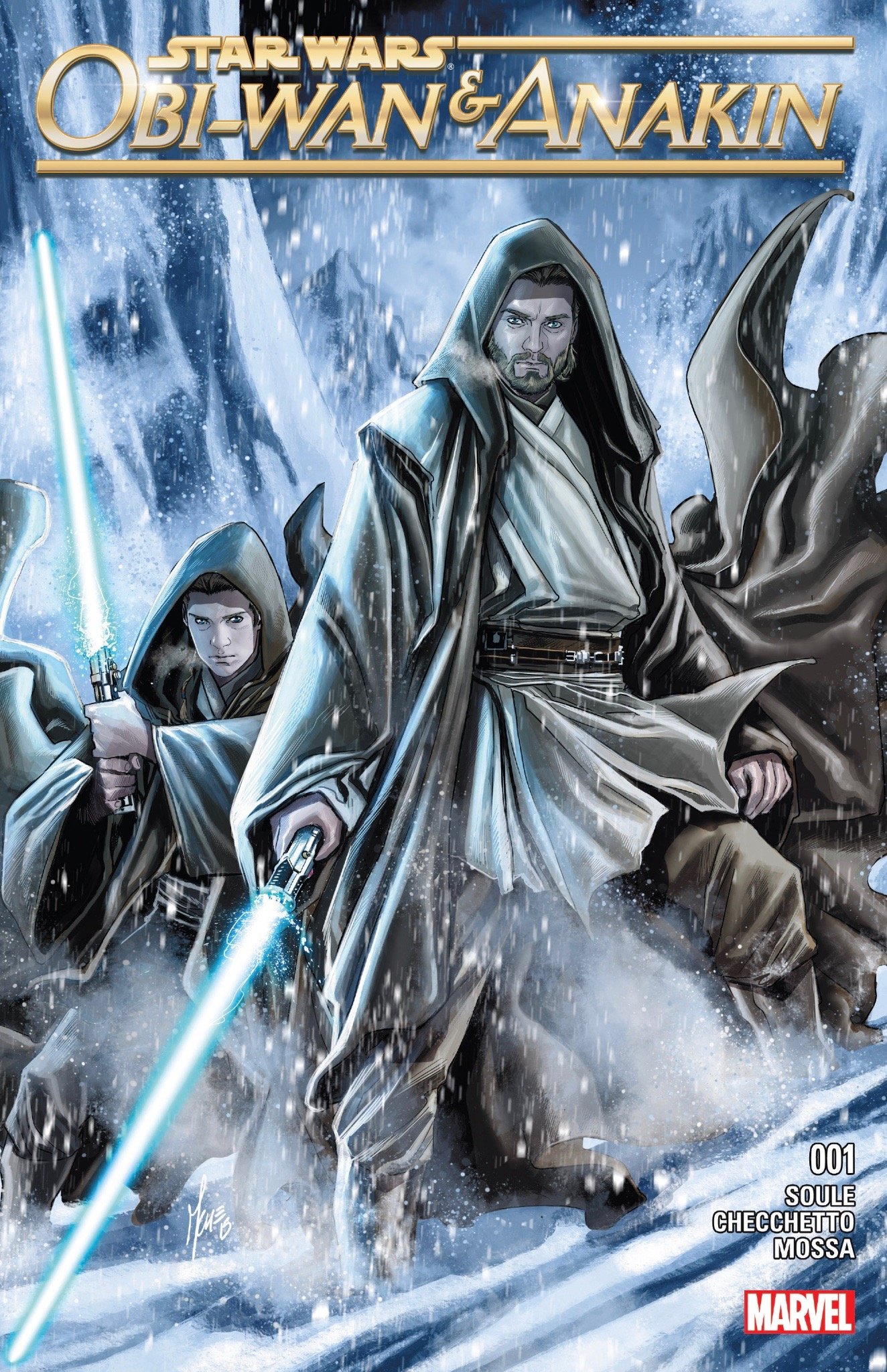 Star Wars comics gets an early kick-off this week with the debut of Obi-Wan & Anakin.  This series takes place between The Phantom Menace and Attack of the Clones.  It’s our first look at this period of the SW Universe…and what a look it is!  There is a lot to take in and if you have a serious case of Star Wars fever, as it seems the entire world has since December 18th, the debut of this series is not to be missed.  SPOILERS AHEAD, so if you are stopping just here let me say it is very good and you should get your hands on it as soon as you can.

Before we dive in, let me say how refreshing it is to take a look back at this period.  We are often reminded that the Republic did not fall apart overnight, and I can tell author Charles Soule is showing us the small bubbles at the beginning of the boil eventually leading to the Separatist movement, and eventually, the Clone Wars.  We’ve had plenty of stories to bridge the latter gap of episodes in the Prequel Trilogy, but this is uncharted territory.  What better sets of eyes to witness this period through than Obi-Wan Kenobi and a young(-er) Anakin Skywalker?  Up until reading this issue, I was all for moving the stories forward from post-Return of the Jedi; but I must admit, I’m just as excited for this series and hope we get more material covering this gap. 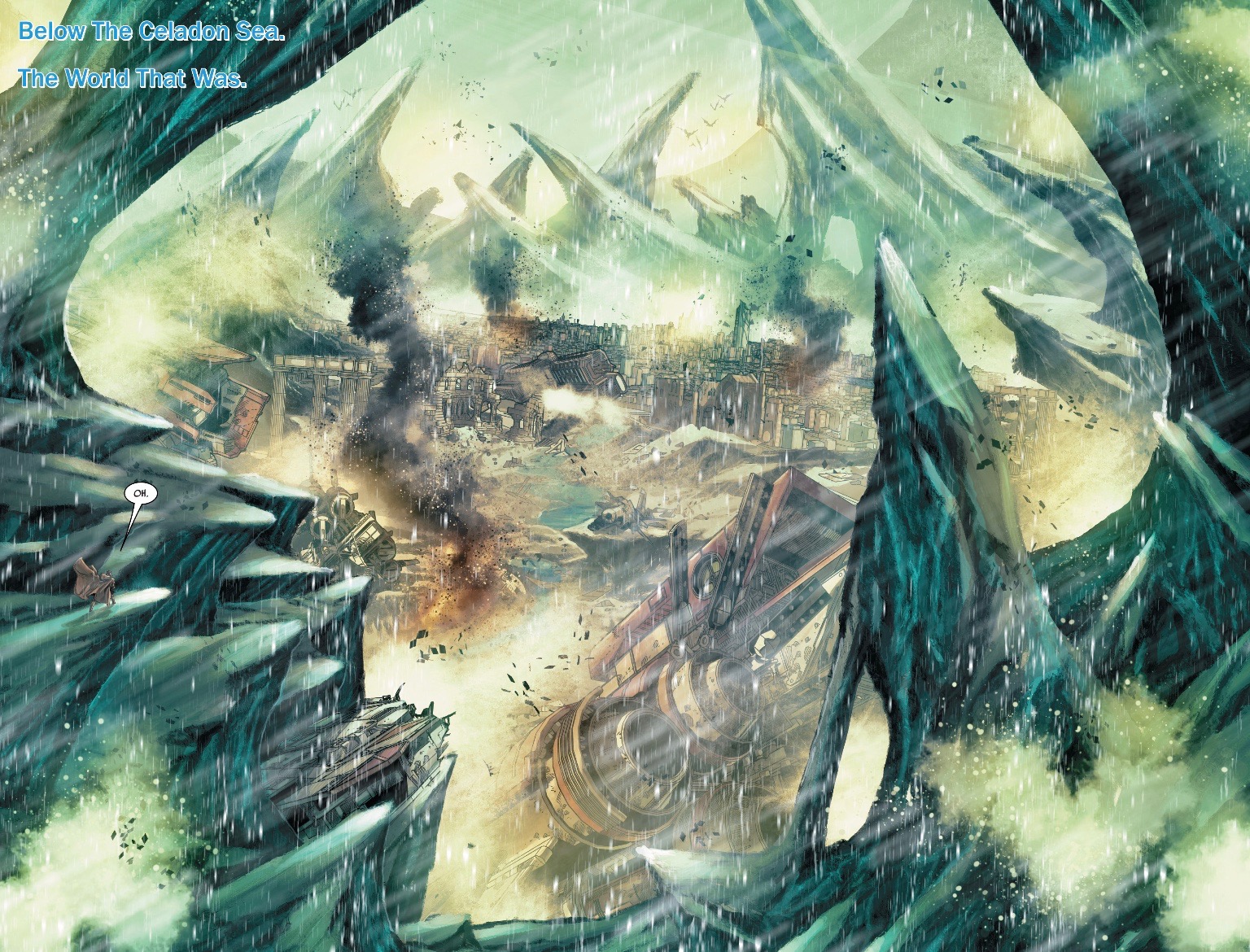 The issue opens with a daredevil crash-landing on the planet Carnelion IV.  Two-lifeboats are jettisoned from the doomed ship, and they contain Obi-Wan Kenobi and Anakin Skywalker.  The Jedi have received a mysterious distress call from the derelict planet and have sent these two to check it out. One of the first sites that catches their eyes are the ruins of The Celadon Sea, a city that is in a state best described as post-apocalyptic.  The artwork by Marco Checchetto and Andres Mossa really shines in these eerie vistas. 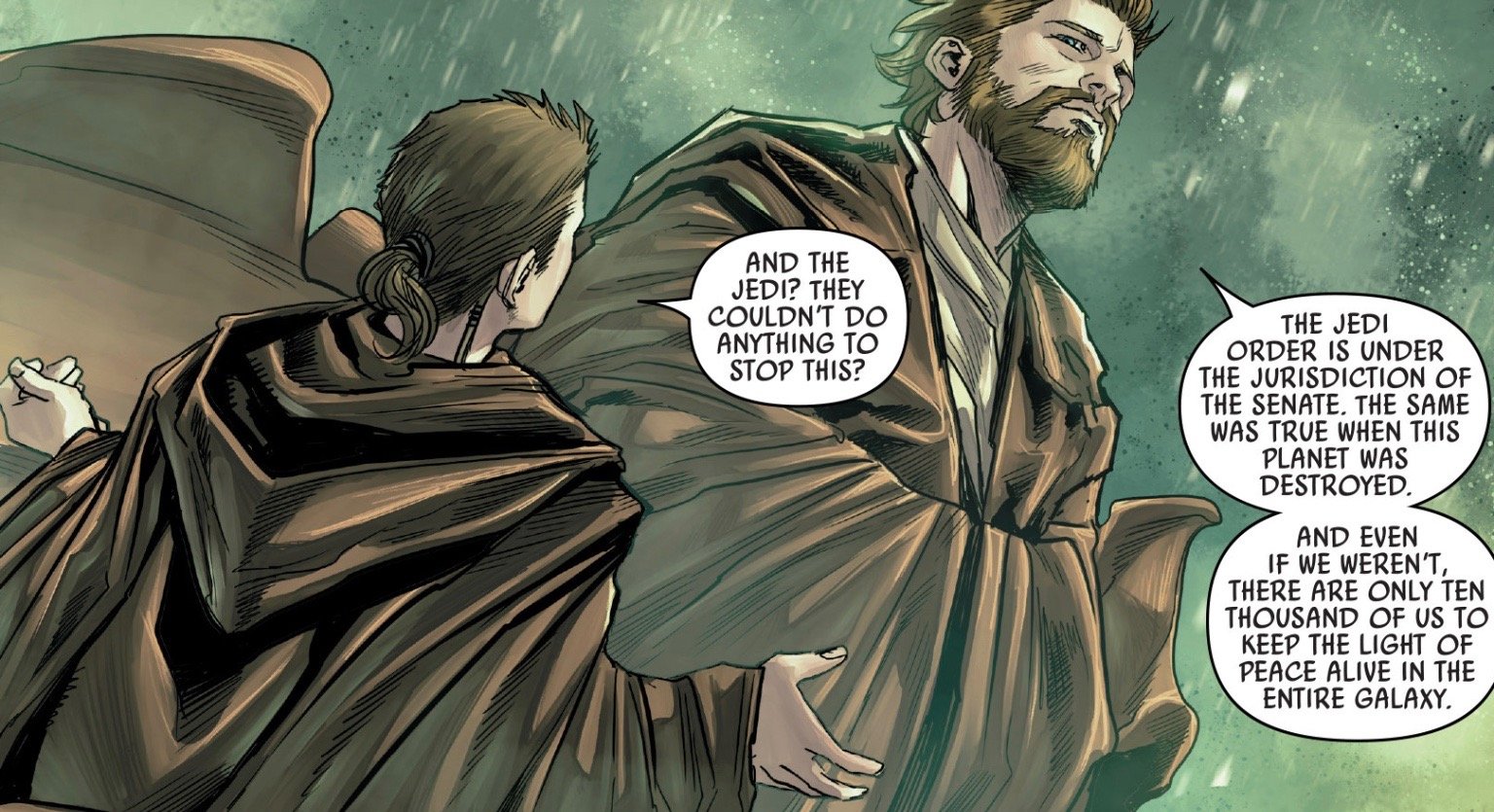 It is established that the deceased inhabitants warred themselves and the planet into a climate-changing, mass-destruction manifestation.  This baffles the mind of young Anakin, whose good and simple solution would have been to force each side to stop fighting.  Obi-Wan is showing Anakin a haunting example of the worst results of war.  The Republic, the Jedi, the Senate…nothing could stop the fighting and eventual annihilation of the peoples on Carnelion IV.  The planet is a cautionary tale, from Obi-Wan’s point of view 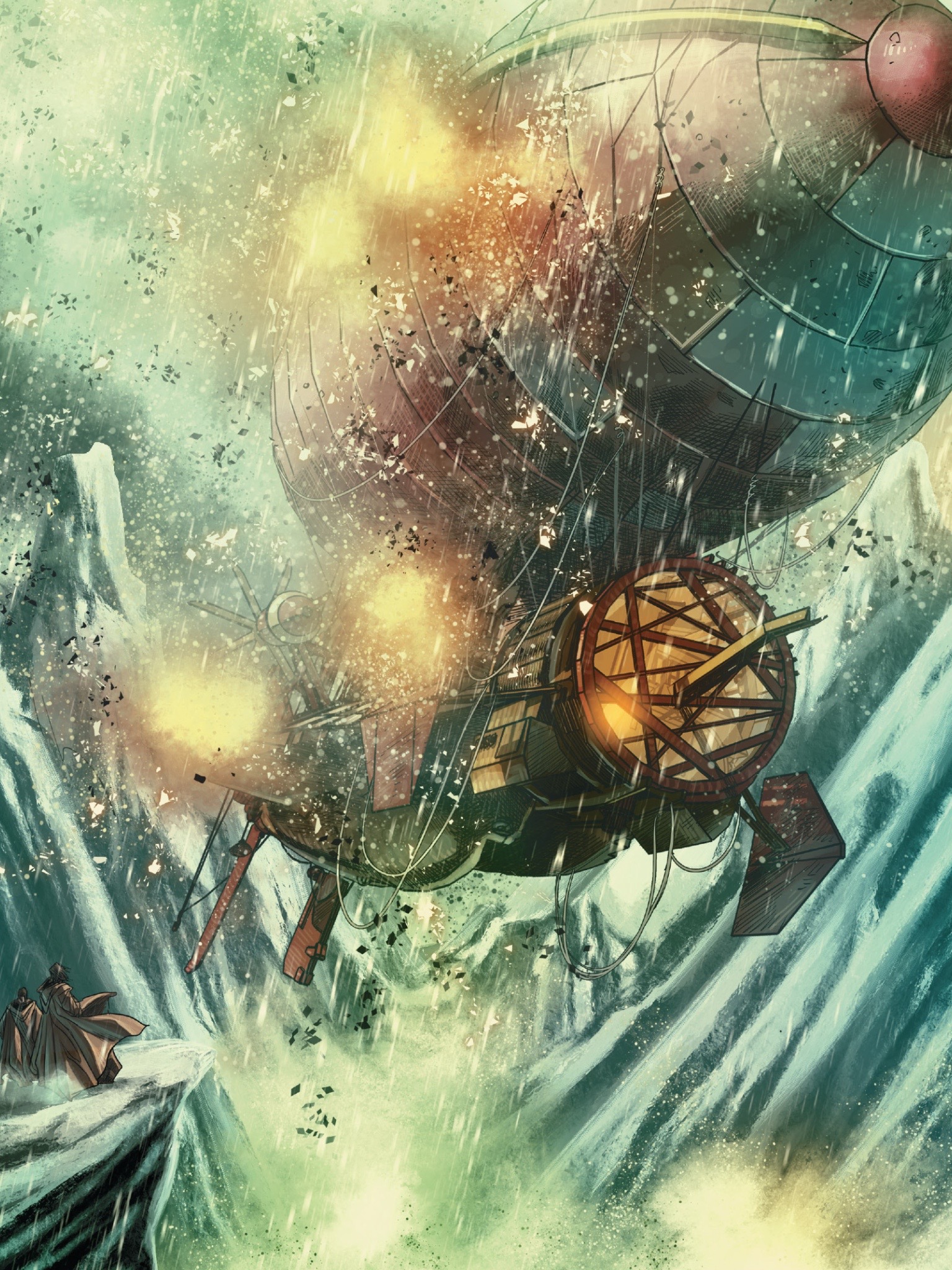 Looks like the war may not be over.  The zeppelin-esque craft blasting onto the scene, barely able to stay above the jagged peaks of the valley, certainly jumps off the page.  The craft doesn’t end up any better and blazes to a crash landing, hundreds of feet below Obi-Wan and Anakin.  Just as the Jedi are about to head towards the crash site and help any survivors, Obi-Wan gives back something he took from Anakin before they departed Corsucant…his lightsaber.

The story then jumps back to Anakin’s lightsaber exercises in the Jedi Temple on Coruscant.  This is all I will show you of who and what Anakin fought, but you’ll notice a couple of Padawans scoffing at Skywalker’s abilities.  No one likes to feel as if they are being made a fool, and Anakin Skywalker is certainly no exception.  Let’s just say he overheard their reactions, and there is a slight miscommunication that results in Anakin being relieved of his weapon. 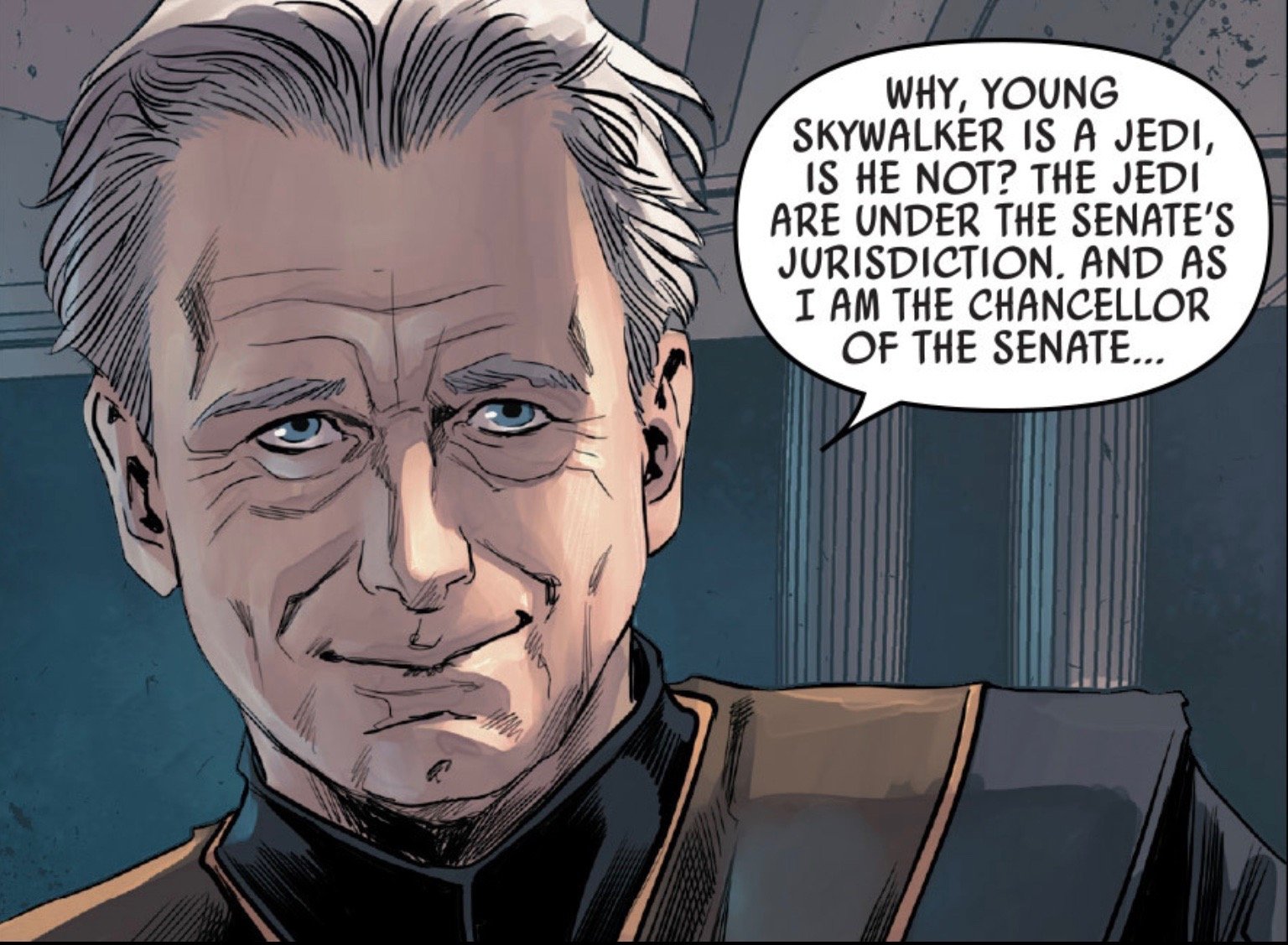 Well, well…look who showed up to watch lightsaber practice.  Your favorite Supreme Chancellor Sheev Palpatine himself.  At this point in time, Palpatine is very comfortable in the head-of-state mantra of walking softly while carrying a big stick.  Here he is, like a sports scout looking for the next star athlete, only we know why Sheev has taken such a keen interest in the up-and-coming Jedi.  Darth Sidious is down an apprentice after Darth Maul’s presumed death.  The above frame seems to be the first time Palpatine asks, then commands, a meeting with Anakin from a very familiar Jedi Master.  We all know where this is headed, but it’s interesting to see Palpatine asserting himself as something of a commander and chief to the Jedi Knights.  I hope we get more of him popping up…and I would love to be a fly on the wall at Palpatine’s first meeting with Anakin.

Another herd of zeppelin ships show up, and two pilots manage to escape while Obi-Wan and Anakin use the Force to slow down the free fall descent of the craft.    The survivors don’t seem to be very familiar with the Jedi.

Actually, they’ve not heard of the Jedi…at all.  Hopefully, Obi-Wan and Anakin can convince them to put those shotgun-looking weapons away.  I’m hoping these mystery beings don’t force aggressive negotiations with the short-tempered Anakin Skywalker.

I thought this issue was great.  First impression of the series is it will be very unique.  I felt it was reminiscent of the Mad Max sequels, which is meant as the highest compliment.  The Road Warrior, Beyond Thunderdome, and Fury Road all begin with Max being dropped in the middle of a desperate plight and helping those whom have not abandoned their humanity.  I would like to think author Charles Soule is going for something like that.  Soule was also the author of the Lando series, as well as the bulk of Marvel’s latest Inhumans books; needless to say, this series is in good hands.  Marvel veteran Marco Checchetto, who also did great work on this past fall’s Shattered Empire, does a great job setting the mood for this series.  Obi-Wan and Anakin have been dropped into a hell of a situation, with only their knowledge of the Force and a couple of lightsabers to keep them safe.

Obi-Wan says, close to halfway through the book, “The only all a Jedi requires is the Force“.  Let’s hope that’s true. 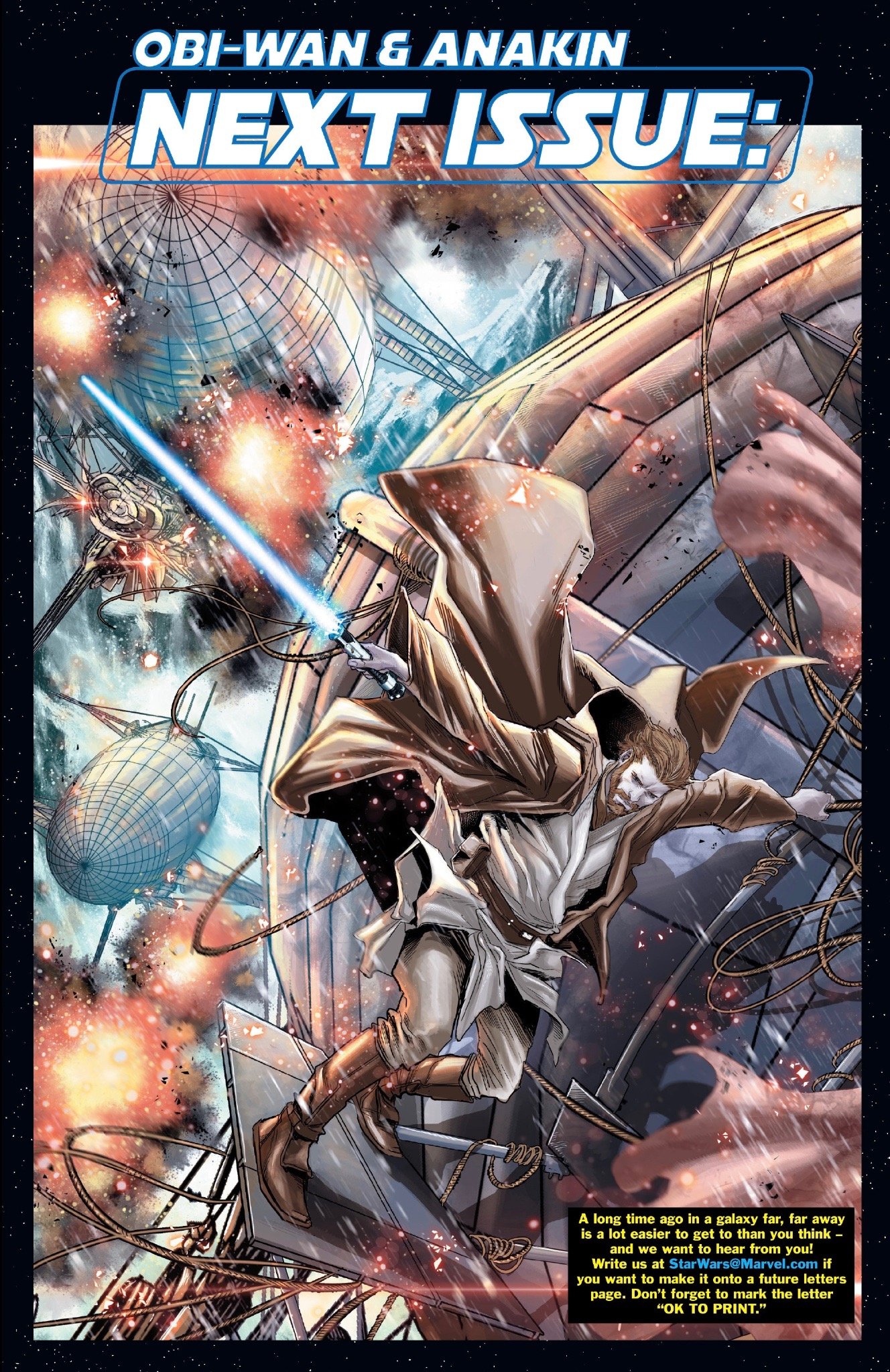 I highly recommend this series.  Check it out at your local shop, comiXology, and Marvel.