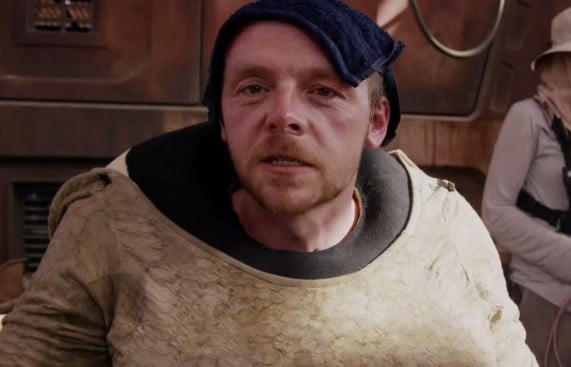 Simon Pegg has been pretty busy lately promoting his latest movie Mission Impossible: Rogue Nation. The British actor gave numerous interviews, where he also briefly talked about his experience shooting The Force Awakens, how he got the role and more…

“I mean, seeing it [Star Wars] for the first time [as a kid] and coming out and being so utterly changed by it, it was an incredible thing to be part of it,” Pegg told us. “I was down there days when I wasn’t working just to hang out and see everybody. Meeting the likes of Carrie Fisher, and Mark Hamill, and Harrison Ford — they were my heroes growing up. They still are. It was extraordinary, and I’m sure they find it hilariously funny. I was holding Carrie Fisher, like, ‘I love you!’ And I could see it, looking into her eyes, I could see the same eyes that I’d seen as a kid. It was literally a dream come true. They’re all awesome. They’re great people.”

In another interview (that I can no longer find), Pegg shared that J.J. Abrams surprisingly asked him if he would like to be in TFA on a casual lunch meeting. He immediately said “yes”.
Also while speaking to HuffingtonPost, Simon made an interesting reveal. It appears that the behind the scenes footage from The Force Awakens, shown at San Diego Comic Con was actually put together for the cast and crew at the end of the shoot last year. It was not done particularly for the Comic Con (from 15:25 min.): HERE

And finally here’s a funny video with Pegg dodging Star Wars questions. “No question the fans will love this movie”! 🙂 (from 3:15)

And another one from USA Today: