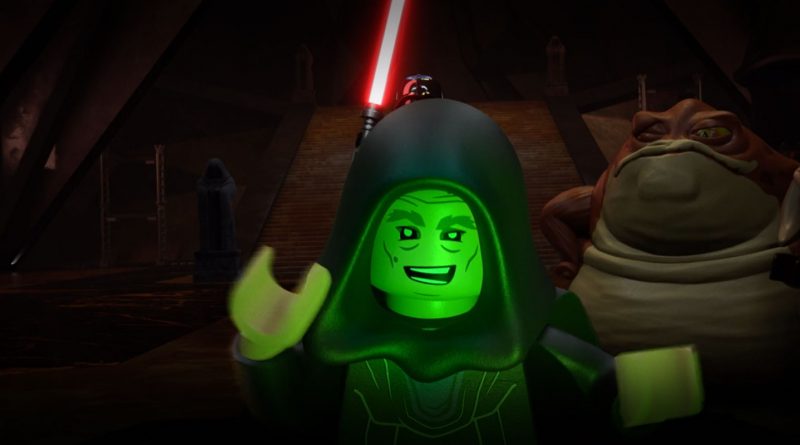 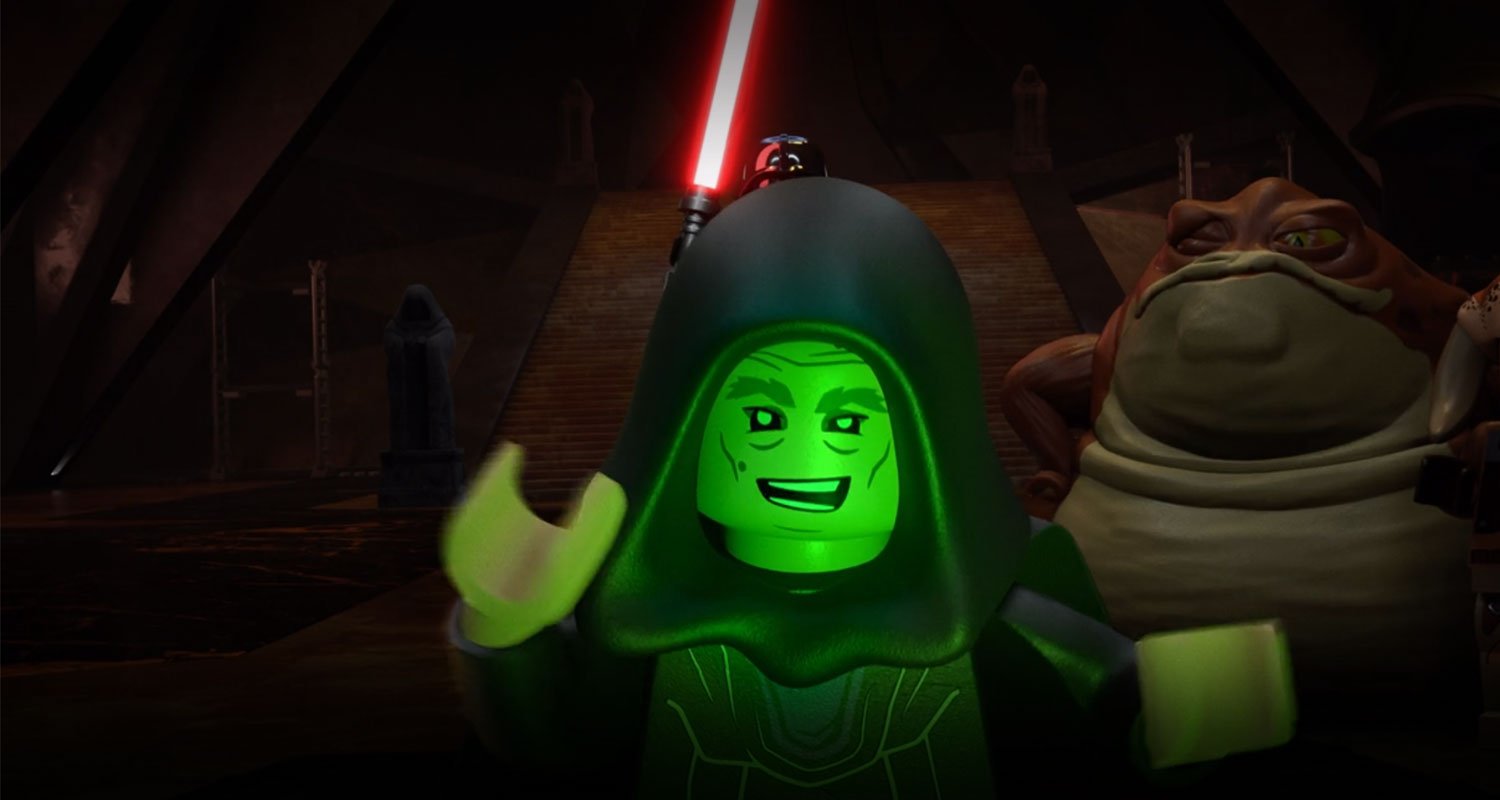 LEGO Star Wars Terrifying Tales is an entertaining Halloween special, with plenty of kid-friendly horror to go along with the traditional jokes and visual gags.

Just like last year’s Life Day special tapped into the Christmas spirit, Terrifying Tales touches on a few familiar tropes of the horror genre, with a few easter eggs thrown in for good measure. The use of animated Lego figures means that it never gets truly scary – though there are some moments that would definitely creep people out if it had been done in live-action. And the frequent supply of jokes means that even the scarier moments don’t stay that way for long, so it shouldn’t be too much of an issue for children.

There is a lot of the typical Lego Star Wars humor in Terrifying Tales, though not every gag or witty one-liner had me bursting with laughter. Most of the jokes are chuckle-worthy, which means when the really hilarious stuff does come along, it takes you by surprise. Anyone who’s seen Lego Star Wars Holiday Special or Freemaker Adventures will be happy to know that Trevor Devall and Matt Sloan are predictably hilarious as Palpatine and Darth Vader respectively.

Dana Snyder also reprises his role as Graballa the Hutt from Freemaker Adventures, and is a joy to hear whenever Graballa is on screen. Graballa was always one of the most consistently funny characters in that show, and it remains the case here as he tries to rope Poe Dameron into giving an endorsement for his holiday resort in Vader’s old castle on Mustafar. 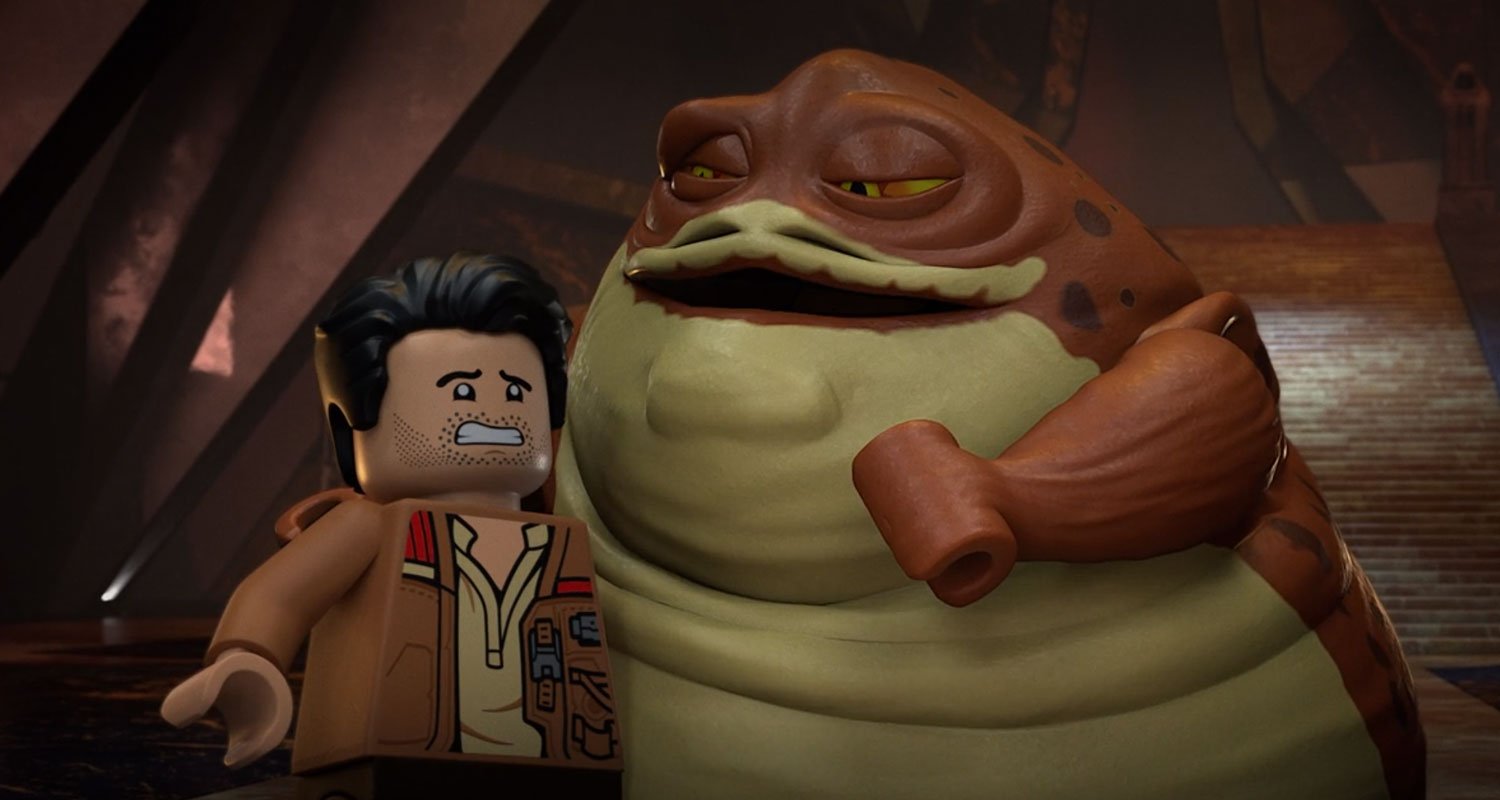 Terrifying Tales takes a leaf out of The Simpsons‘ Treehouse of Horror episodes by having a character tell three “scary” stories to characters in the present day storyline. A Sith acolyte named Vaneé is our narrator for these tales, a man who used to serve Vader like the acolyte we see in Rogue One, voiced well by Tony Hale. His voice sounds exactly like his portrayal of Dr. Psycho in Harley Quinn, though the profanity is toned down this time. He makes for an entertaining villain, and it is he, Poe, and Graballa that hold up this part of Terrifying Tales. Poe’s arrogance and vanity are amped up a bit, while nearly everything Graballa says is hilarious.

The fictional stories and flashbacks are more entertaining than the present-day storyline, so it’s a shame we don’t get anymore than the three of them. Canon enthusiasts will need to let go of established lore here; Lego Star Wars has always been canon-adjacent at best, and these three tales significantly contradict what we’ve seen in the films and comics. In fact, Poe actually calls out one of the stories as not being true. The final act is engaging enough though, and it teaches both children and adults a heartwarming lesson about fear; it’s okay to be afraid, but it’s how you deal with it that matters.

The first story, called The Lost Boy (a little nod to the classic horror film), is an alternative retelling of how Ben Solo became Kylo Ren. It throws out the comics arc that tells the official story of how Kylo Ren was born, but it’s still very entertaining. Ben is frustrated that he’s being held back by the other younglings during his training, and suddenly the Knights of Ren arrive in the nearby village. The leader, named Ren, looks like the Lego-equivalent of his comics appearance, and is wonderfully voiced by Christian Slater. 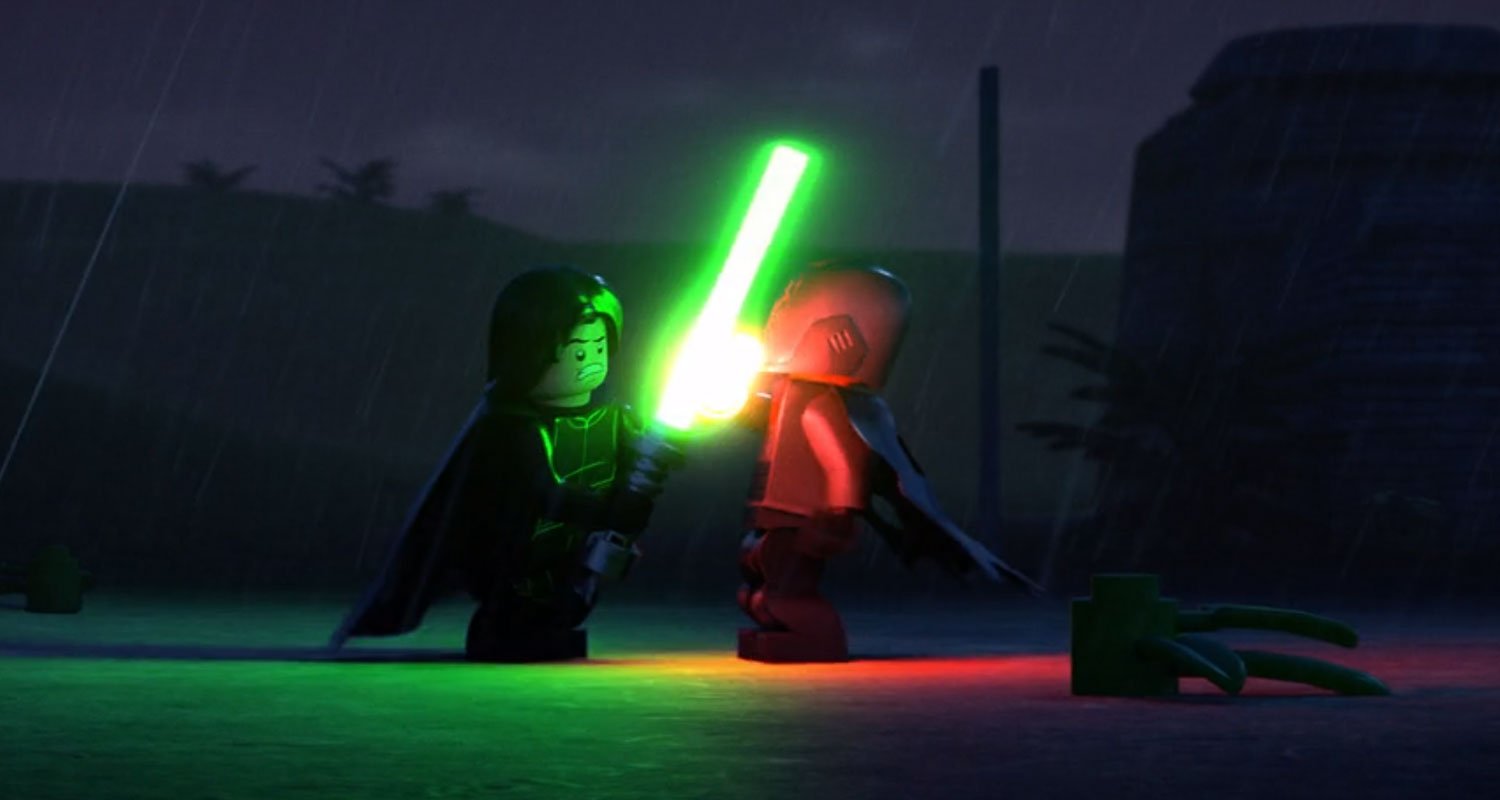 Though Ben initially rejects their advances, he has a nightmare that night which would actually be a bit scary if it was live-action. We get a lot of common horror themes here; a face pushes through the ceiling, the Knights of Ren torment him, and even the younglings dance around him with glowing eyes. It ends with a funny bit though, as we realize the voice repeating “Solooo…” in a ghostly cadence is actually just Christian Slater standing outside his bedroom.

We’re then treated to a brilliant 80s montage of Ben going out and having fun with the Knights of Ren, who actually hand him his helmet and armor. The ending of this story is a bit confusing though, and takes some logical leaps in order to reach its conclusion. Ben initially rejects Ren’s deal, not wishing to burn down Luke’s Jedi temple in order to join their gang. But having defeated Ren, he decides not to go back to the Jedi and become Kylo Ren anyway. It’s a more forgivable stumble in this format than it would be in a canon story, but it’s still a strange one. 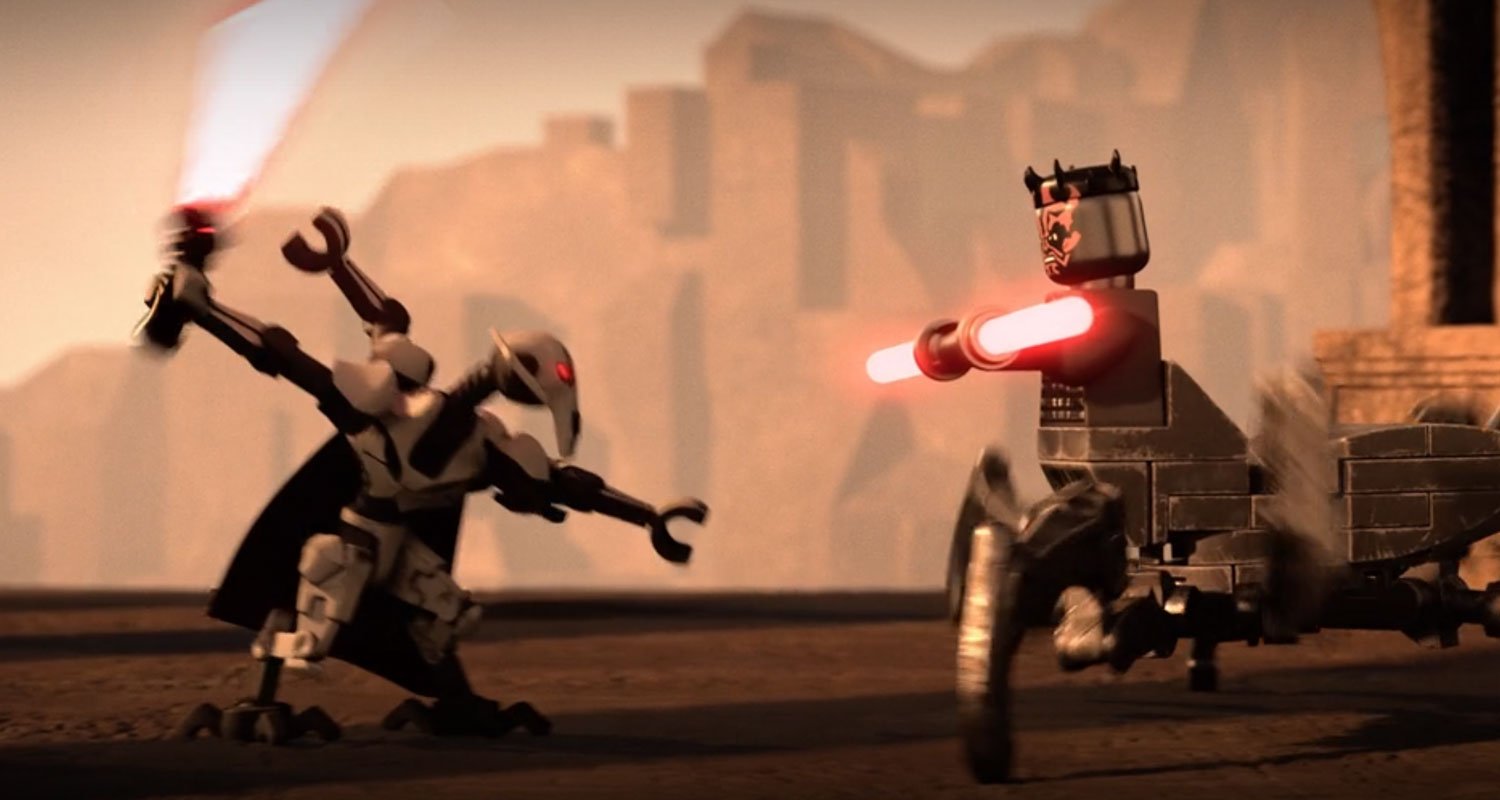 The second story story, called The Dueling Monstrosities, is all about General Grievous and Maul competing to collect an ancient Sith lightsaber for Darth Sidious. The saber supposedly corrupts the mind of anyone who wields it, fuelling their own greed and ambition. Maul’s return is played very well, announced with a clap of thunder and lightning. This time, after some trial and error with different legs, Maul decides to stick with the spider legs he uses in his Clone Wars return; it feels appropriate for a horror story.

Maul is once again played by Sam Witwer, who is iconic in the role at this point. Matthew Wood reprises his role as General Grievous (and later the battle droids), and it’s nice to see the character back again. Apart from a couple of appearances in the Lego Star Wars: Droid Tales series, this is the character’s first appearance since season five of The Clone Wars, back before Disney took over the franchise. It’s fun seeing Maul and Grievous fight on-screen (they’ve only ever clashed in the Son of Dathomir comic), and Maul’s power in the Force gives him the advantage over the general as you’d expect. 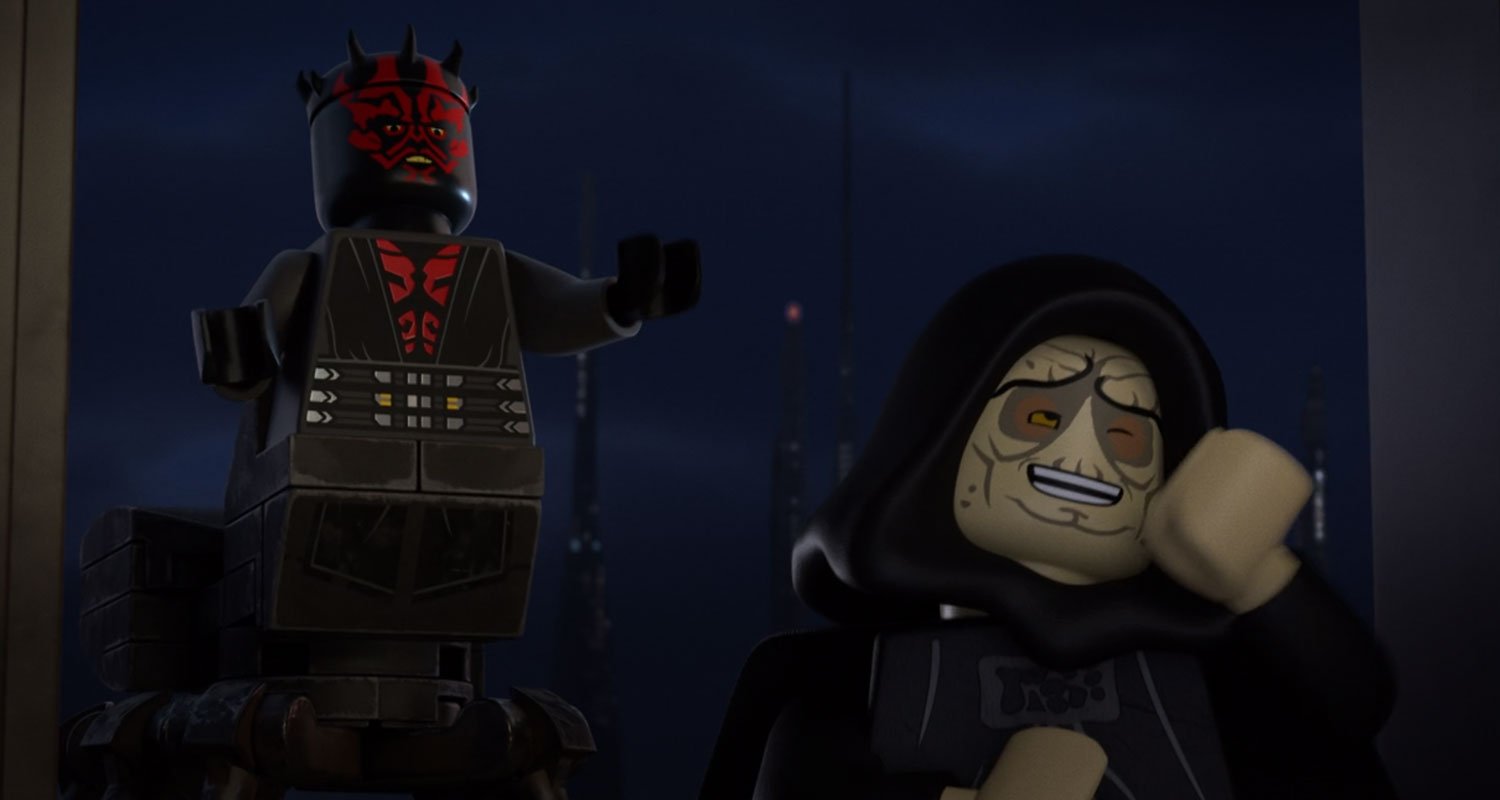 His return to Palpatine, corrupted by the ancient lightsaber, is played for laughs as Palpatine pushes him off his balcony and whistles the Imperial March while waiting for him to hit the ground. Other than a reminder of Palpatine’s power, it’s another great comedic moment from Trevor Devall.

The third and final story, The Wookiee’s Paw, is an homage to the classic Monkey’s Paw tale (which has also been adapted by The Simpsons‘ Treehouse of Horror). This one sees a what-if-style story in which Luke is given a wookiee’s paw which can fulfill any wish he wants by Watto. We see an alternate storyline play out, where Luke’s wish to leave Tatooine is answered by the Empire. 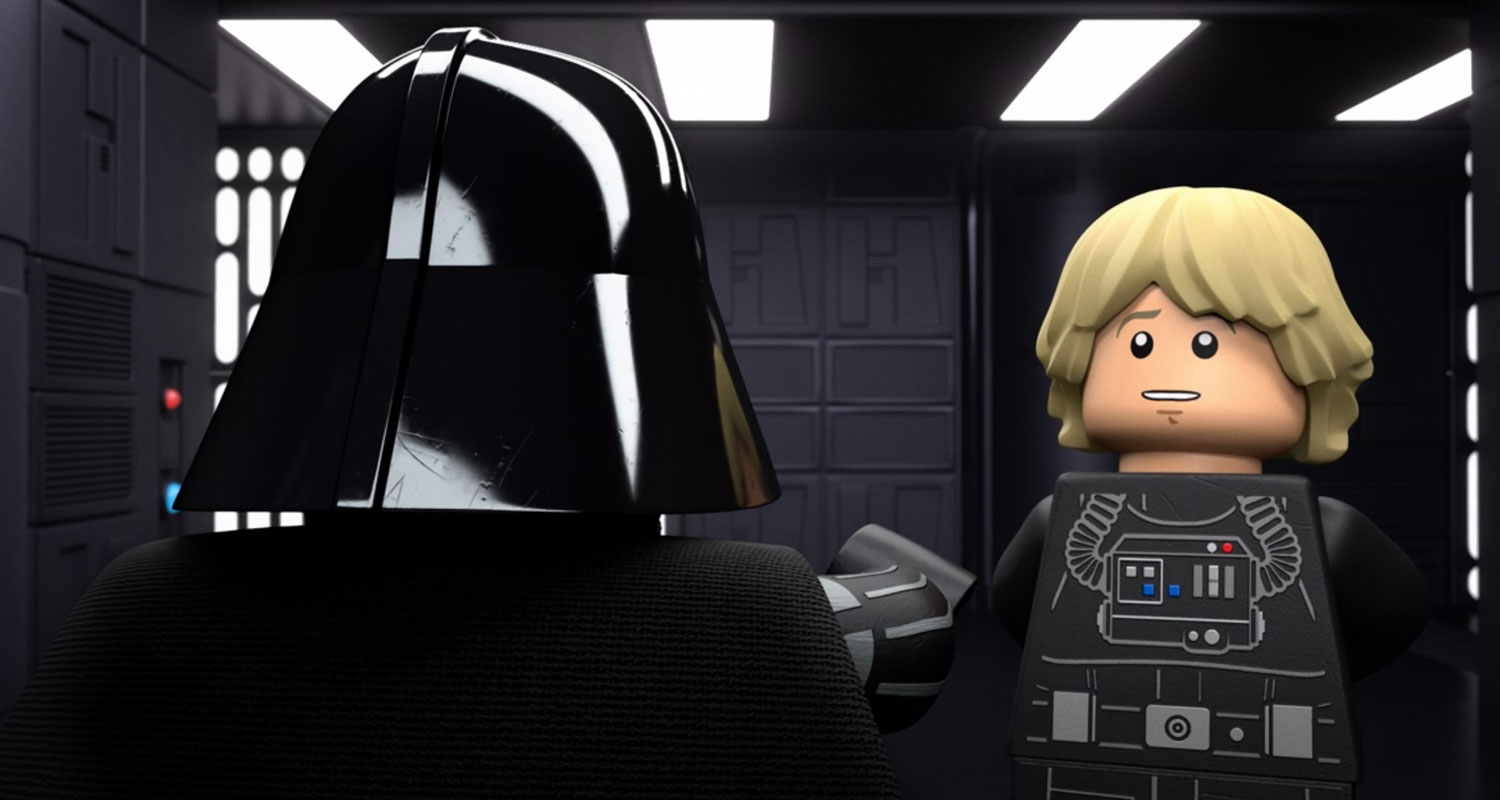 He becomes a great Imperial pilot and is quickly noticed by Darth Vader, only for his greed and ambition to get the better of him. Hilariously, the tale ends with him accidentally blowing up the Death Star while working for the Empire (with Princess Leia and Obi-Wan flying X-Wings in the trench run), in a classic “be careful what you wish for” moral.

Anyone who’s seen Lego Star Wars stories in the past knows what they’re getting, and Terrifying Tales is pretty much your standard Lego Star Wars fare. It’s an entertaining 45 minute special, with some fun stories, a couple of light scary moments, and plenty of gags. It’s available to watch right now on Disney Plus. 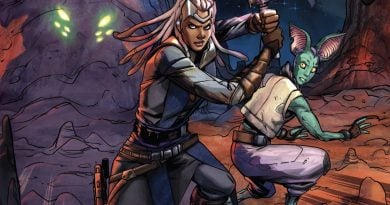 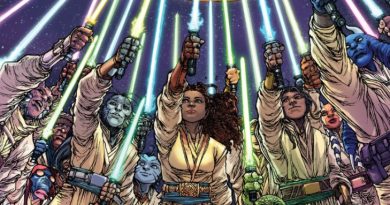 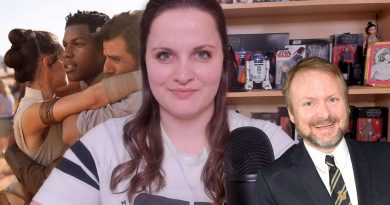