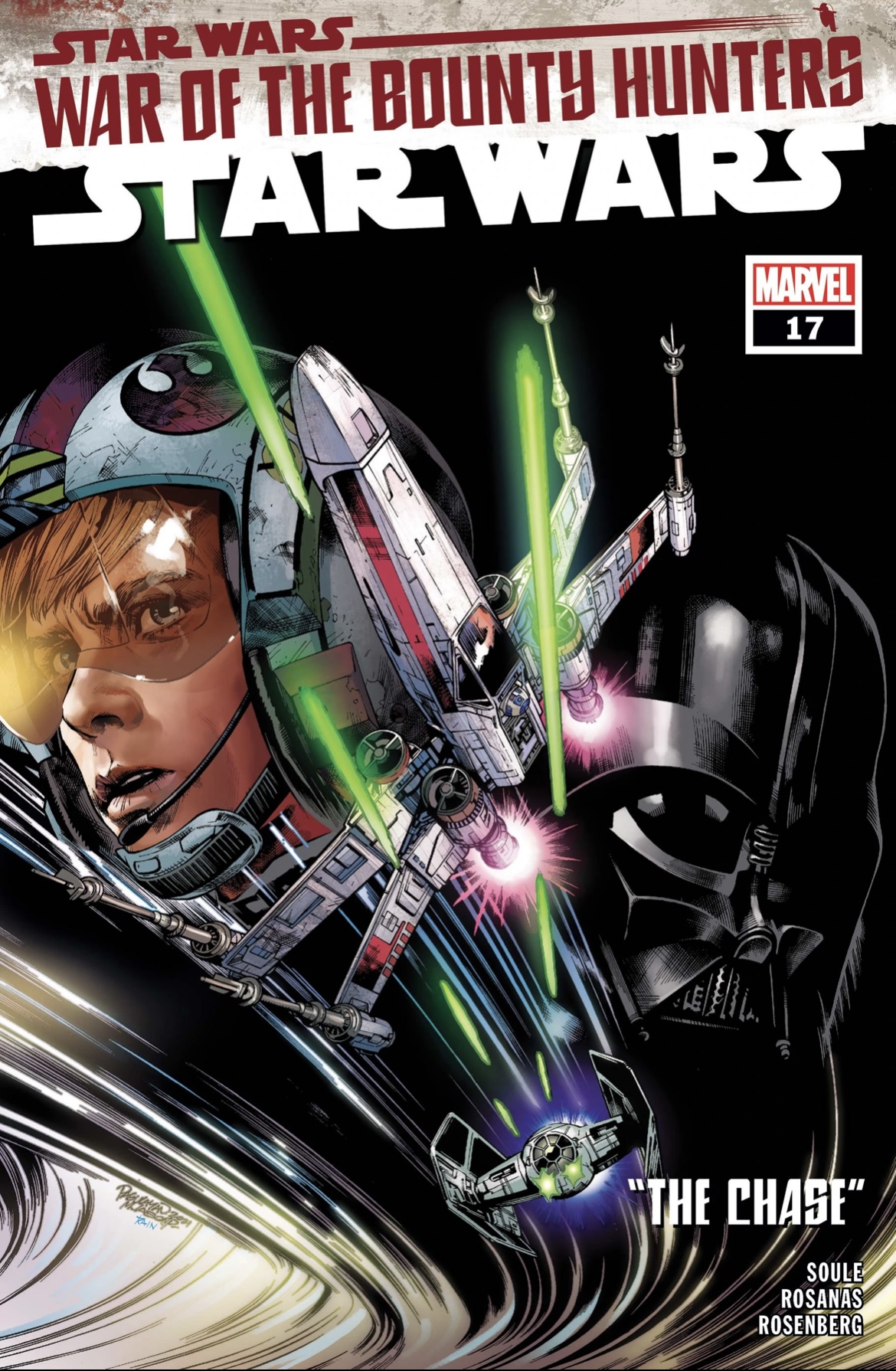 War of the Bounty Hunters continues this week in Star Wars #17. Though I’ve hemmed and hawed about this event, writer Charles Soule begins to steer the original trilogy characters out of this and towards more meaningful stories I’ve been hoping for. This period between The Empire Strikes Back and Return of the Jedi has the potential to illustrate the dramatic change we see in Luke in the latter. Soule appears to be heading in that direction, putting Luke face-to-face with his greatest fear and uncertainty – Darth Vader. SPOILERS AHEAD…. 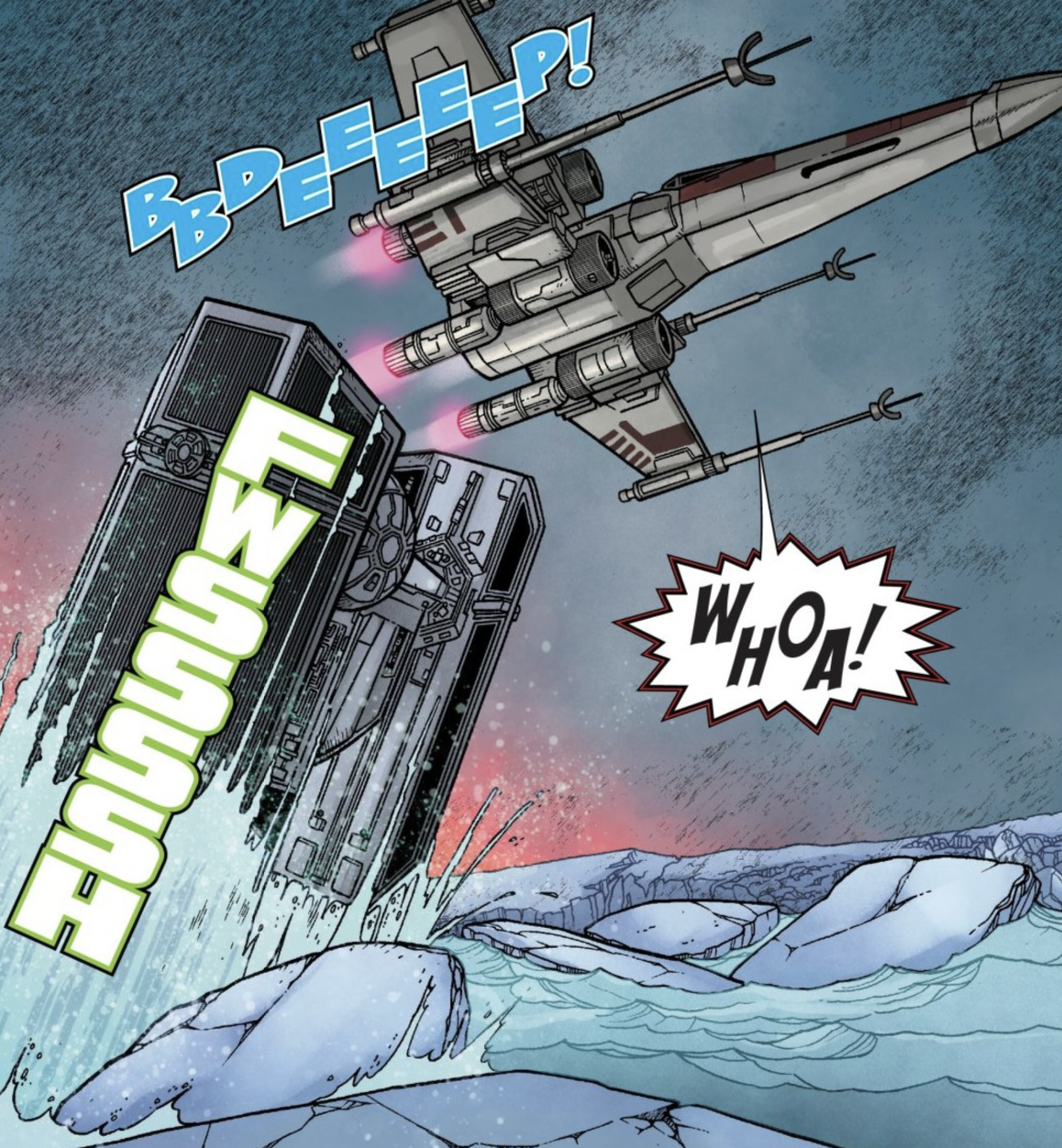 The issue opens with Vader hot on Luke’s tail, reminiscent of the Dark Lord’s pursuit in the trenches of the first Death Star. This time, they commune through the Force, a nice touch by Soule which allows a dialogue without crossing lightsabers. My prediction is we won’t see these two cross lightsabers in this series, allowing the gravity of their reunion on Endor to remain. Vader continues to taunt Luke, poking at his vulnerability – Luke’s concern for his friends, especially the precarious position Han is in. Luke is able to ignore the ruse, using the frigid temperatures and the cold water to create an ice wave which traps Vader’s TIE. 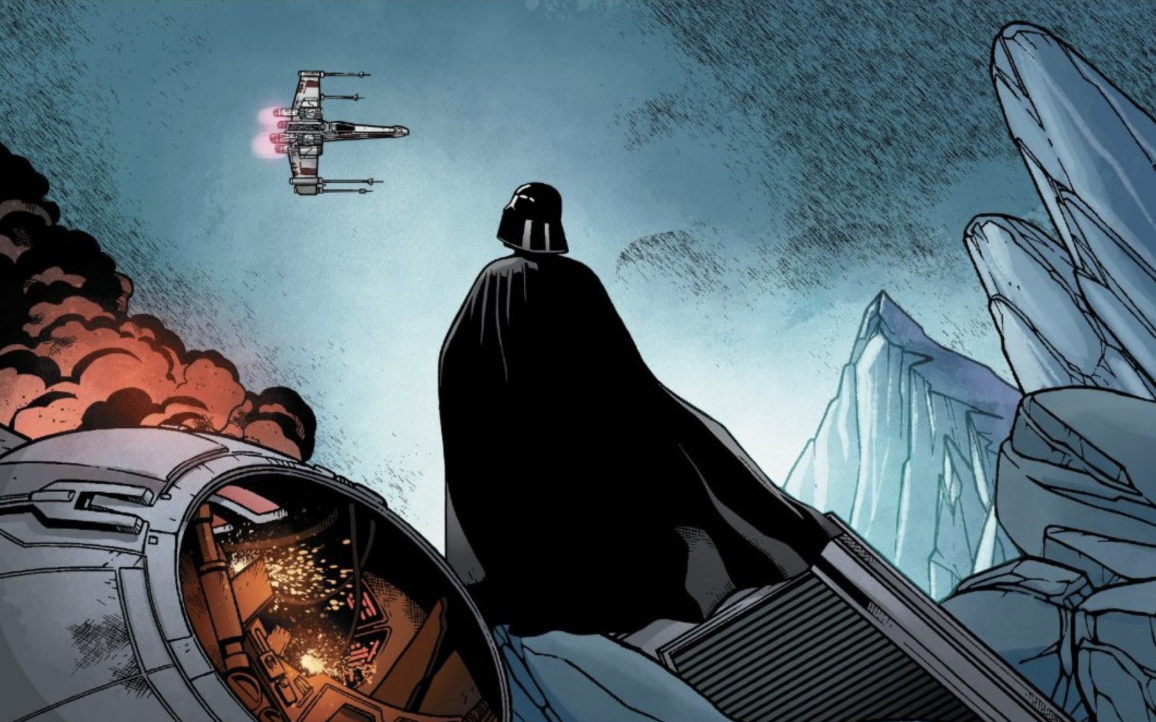 With Vader vulnerable, Luke must make a choice. Does he kill the Dark Lord or leave the planet to rejoin his friends on the Millennium Falcon? Luke gets close to pulling the trigger on Vader, but withdraws at the last second. Perhaps the Force is telling him something. Neither of them address the eight-hundred pound Bantha in the room about Vader’s parental claims, only Luke saying he’s not ready to deal with him yet. For now, he’s going to solely focus on saving his friend.

The Millennium Falcon is a sitting duck, just far enough away from the shuttle carrying Han. Lando, Chewie, and Leia work frantically to restore the ship after it suffered a seismic charge from Boba Fett. Time becomes more precious when a Hutt fleet appears, headed for the shuttle to apprehend Han. As they struggle with repairs, they realize the system itself is refusing to be repaired. Remembering an old friend who can help, Lando makes a solo trip into the bowels of the Falcon for an impromptu reunion.

Lando’s relationship with Elthree is something I really hope the forthcoming Disney+ series expands upon. The novelization of Solo added a lot to the character and her integration into the Falcon, but this is the first time we’ve seen Lando interact with her directly. He pleads with her to help them, and it seems she’s forced this reunion to get a well-deserved apology. Elthree helps with the repairs, and the systems are restored. I love that Soule used this moment to reconnect the two characters, allowing them an intimate moment and hopefully planting seeds for more further down the line. The Falcon is on its way to be repaired, and Luke is about to intervene in the Hutt abduction of Han. All seems well, until…

Vader did some repairs of his own and the pursuit continues. Though his TIE is in rough shape, Luke is still going to have his hands full, and it will be up to those aboard the Millennium Falcon to rescue Han, it seems. Though I’m rooting for Luke, I’m excited to see more of this Force-conversation between him and Vader. The art by Ramon Rosanas and Rachelle Rosenberg is really solid, with the contrasts of the frozen sea with the stars above. It really sets a beautiful backdrop for this conflict between father and son. 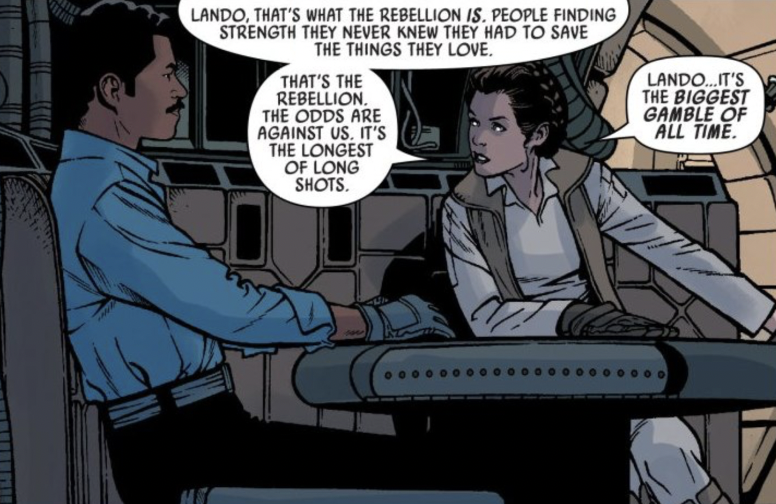 Lando and Leia finally get a chance to have a moment themselves while waiting for the ship to come back online. As Leia thanks him for his help, Lando reminds her Han is his friend and that he’s not doing this for their rebellion. Leia takes the opportunity to challenge him to do more, not only help in rescuing Han, but putting his talents towards helping the greater galaxy and good. She appeals to the inner gambler inside him. We know from the previous Lando comic series and what this charming rogue demonstrates later in the saga that Lando is already a hero. We’re just getting to see him prove it to one more person who wrote him off as a gambling scoundrel. Once the ship is online, Lando tells Leia to take a gun turret so they can go rescue their friend.

A very solid issue from Charles Soule, who continues to demonstrate how well he gets these characters. I’m excited we’re finally getting back to the quieter moments of humanity rather than blasters and bounty hunters. If that’s your thing, I’m glad you’ve had months of it, but I’m ready to move beyond it. There’s a lot of exciting character work to be done, and I’m happy we’re heading in that direction. One more issue in the War of the Bounty Hunters event and my goodness, it looks like it’s going to be good! 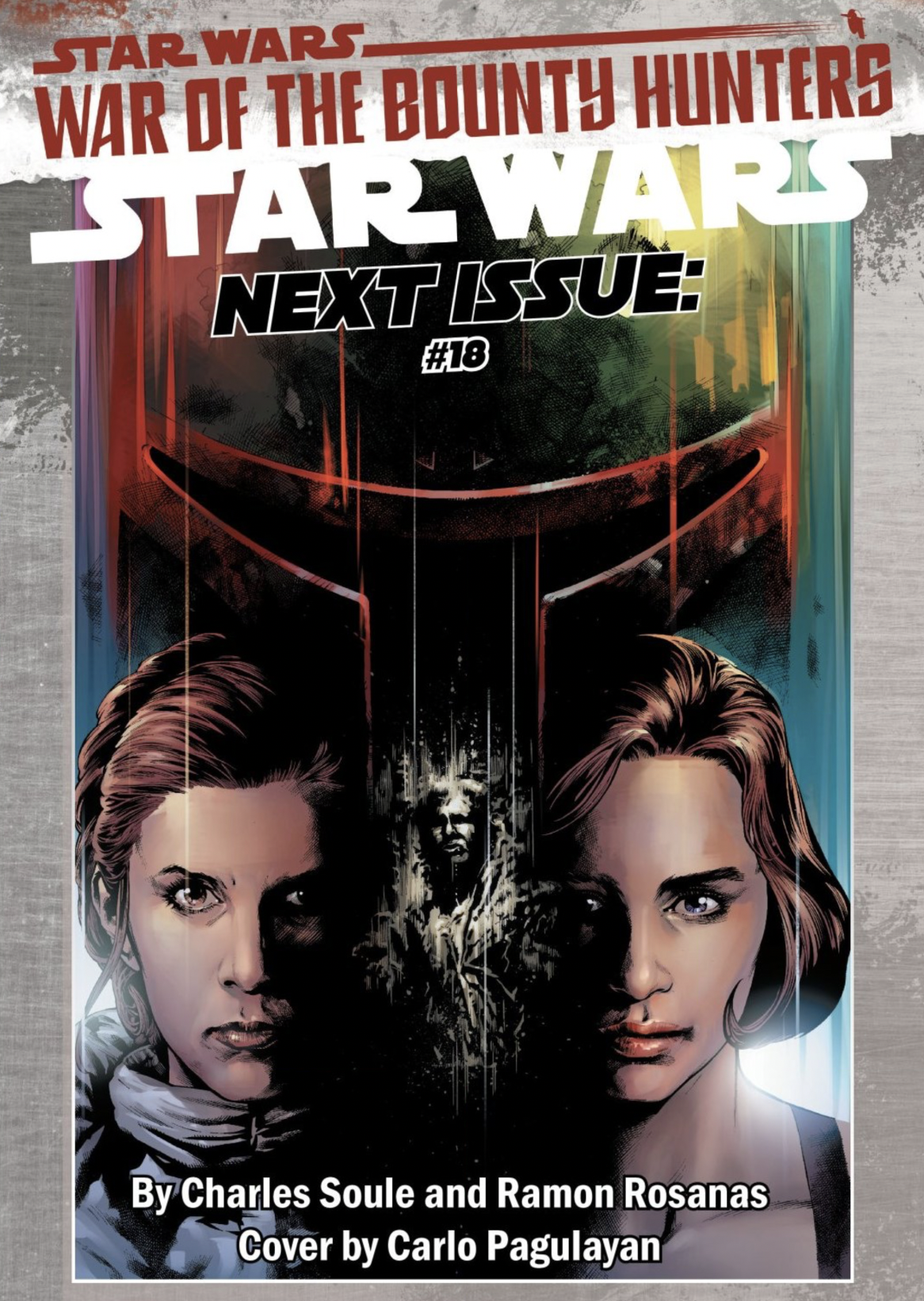