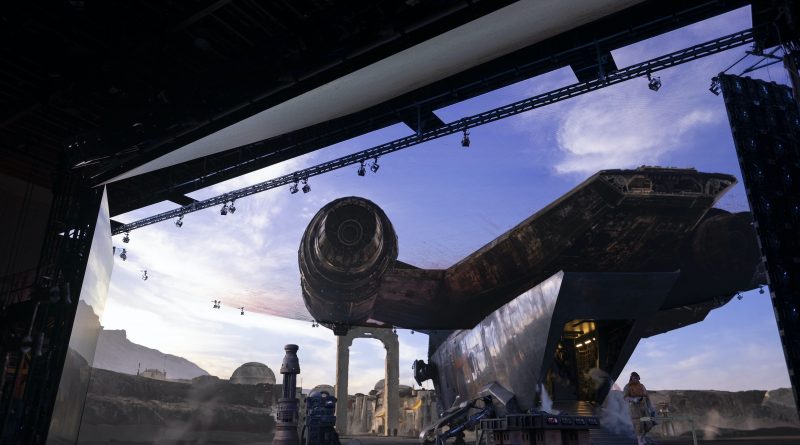 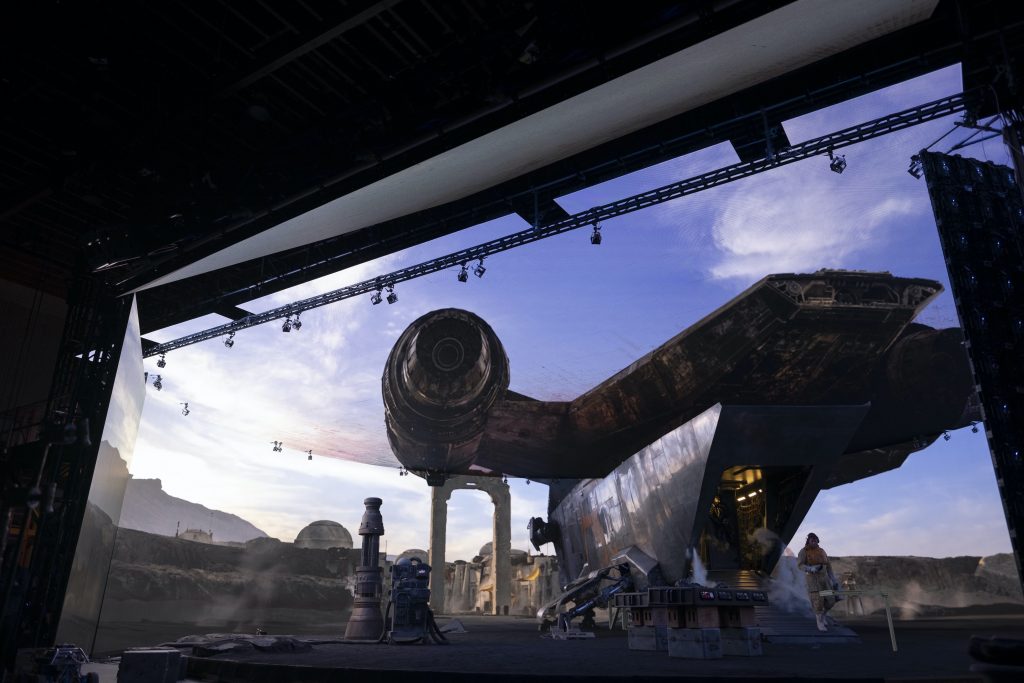 Disney Gallery: The Mandalorian‘s fourth episode “Technology” clocks in at 27 minutes and is all about the visual effects advancements used to bring the series to life, specifically the state of the art “Volume” that has changed the game forever. Jon Favreau talks with his cast and crew about how they developed the technology, with each department delving into how it has improved every aspect of filmmaking production from their respective roles. Oh, and George Lucas shows up!

I said this in my review of the first episode, and it really needs to be addressed again. Jon Favreau’s knowledge of film production history is remarkable. He cites techniques used in 1933’s King Kong as tone setters for the future of filmmaking. I know King Kong is a classic piece of cinema, but it is evident that Favreau knows his history, and not only that, does his homework on what techniques sparked new ideas, which give him a trained eye at seeing what exists now and conceptualizing what it can become in the future.

The work done on Disney’s recent remakes of The Jungle Book and The Lion King laid the foundation for Favreau and The Mandalorian, especially the visual effects. They used in-camera visual effects which allowed camera operators, directors of photography, and directors to view shots fully realized. As a visual effects geek this excites me, because it optimizes their ability to get the best shots as they are happening, and not having to resort to presumption that is tailored and fixed in post-production later. I can only imagine he amount of efficiency this provides as well as reducing post-production review and alteration process. 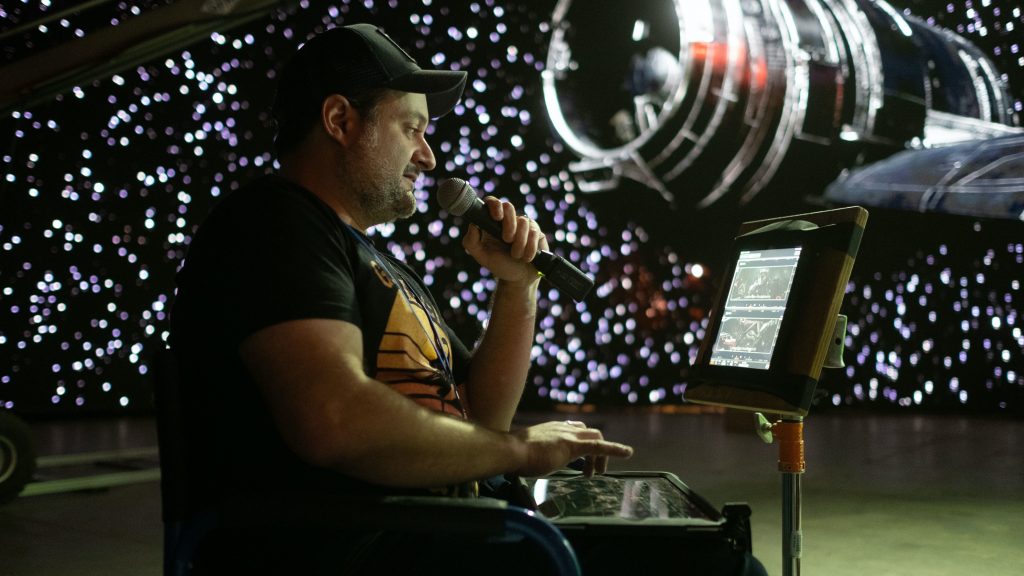 The Volume is almost a crew member in itself. The documentary paints it as this looming presence, and it literally is. Picture being in a round room, the walls 75 feet in length, with the entire wall and ceiling made up of thousands of LED screens creating the environments for each set. If you ever went on field trips to planetariums or aquariums that had giant screens encompassing the walls and ceilings to immerse you in a location, it is like that, but a million times more realistic. The benefits of this technology are immeasurable. The fact that they no longer have to rely on natural light time-crunches to preserve continuity must free the entire crew of so much stress. As they say in the documentary, they can literally film at “dawn” for 12 hours if they need to, freezing time for all intents and purposes. The technology has been a massive asset for the directors too.

Rick Famuyiwa said the Volume made directing easier because he was able to see the environments and locations versus having to direct while imagining something all the while staring at a giant green room. Ironically this LED technology has made directing more “real” even though it is anything but.

Taika Waititi, who will also be directing and co-writing a Star Wars feature film, said he is not able to tell where real set objects end and the Volume screen begins while standing inside the room. Dave Filoni said they would all make friendly bets, especially in the hangar during the filming of chapter 6, trying to guess what was a real object and what was on the Volume screen. That is mind blowing. If they can’t tell standing five feet away, the audience has no chance of knowing, so the illusion works. 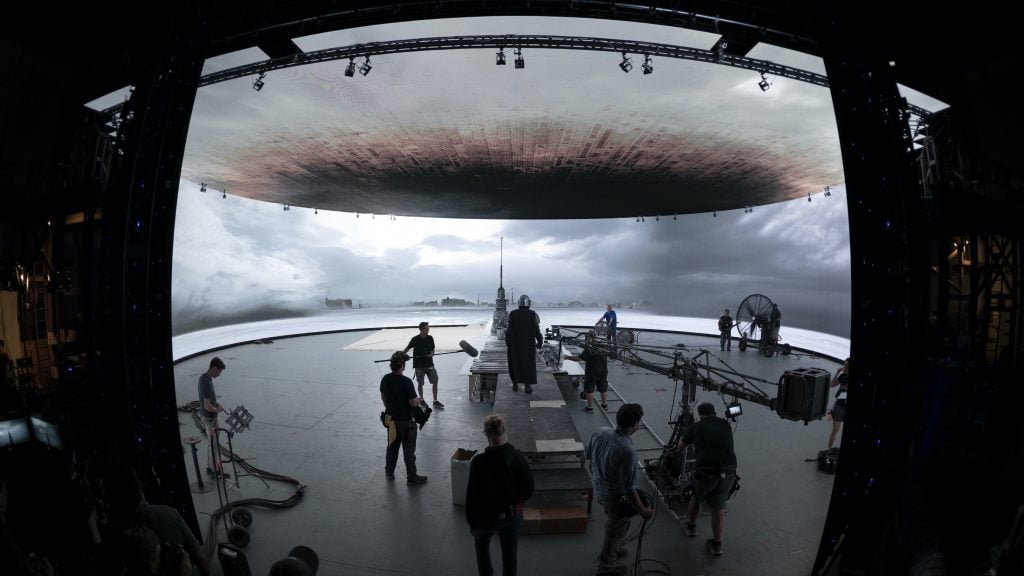 The key to the Volume is the “game engine” technology, which animates everything in the environment in real time. Another important benefit of the Volume technology is its creation of “true” ambient lighting, which creates natural reflections and shadows. This is vital for The Mandalorian because the main character is covered head-to-toe in reflective metal armor. In what used to be a challenge, having to cover up and fix reflection errors with characters like C-3PO in the original and prequel trilogy, they now are able to fully embrace true reflections which help sell the illusion of a real environment even more. They admit to trying to use reflections as much as possible to sell the illusion, which I thought was pretty awesome.

Dave Filoni revealed that the Volume sets can be changed out in 30 minutes. He did not specify but I imagine this also means the physical objects on the set floor as well. Really think about that for a second. They can go from a desert in Jordan to snowy mountains of Italy in 30 minutes. This is going to change everything, especially budgets for Star Wars shows, and likely Star Wars feature films (depending on the director’s style). They can make these shows faster and on a much lower budget than previous productions while capturing indistinguishable results. This opens the door for telling stories that Disney Studios may have previously been hesitant to explore, on a lower budget. 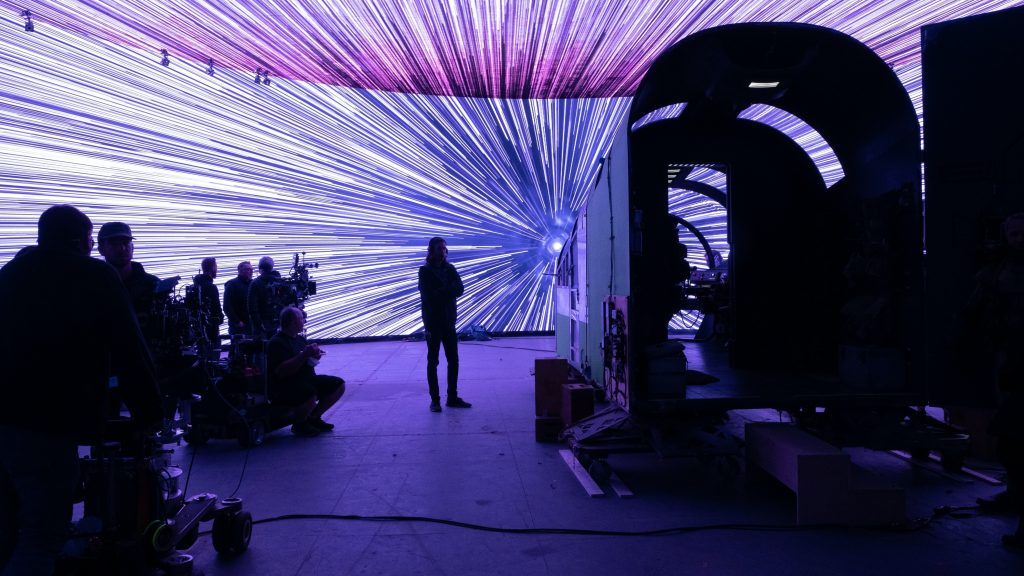 The technology has really excited the actors too. Instead of staring at a blue or green room, they are in the location, acting against the environments, which really improves the performances in an ensemble scene. Carl Weathers explains how if there is a fire, or a cave closing, or lava walls, each actor is reacting to it and seeing it exactly the same as they would in real life, which captures the truest and purist performances and reactions. That was such a great point and really vaults the power of this technology to the forefront as audiences focus on the actors and characters first and foremost.

Giancarlo Esposito was over the moon about the technology, saying “It’s interactive. I can feel the power of the sun.” 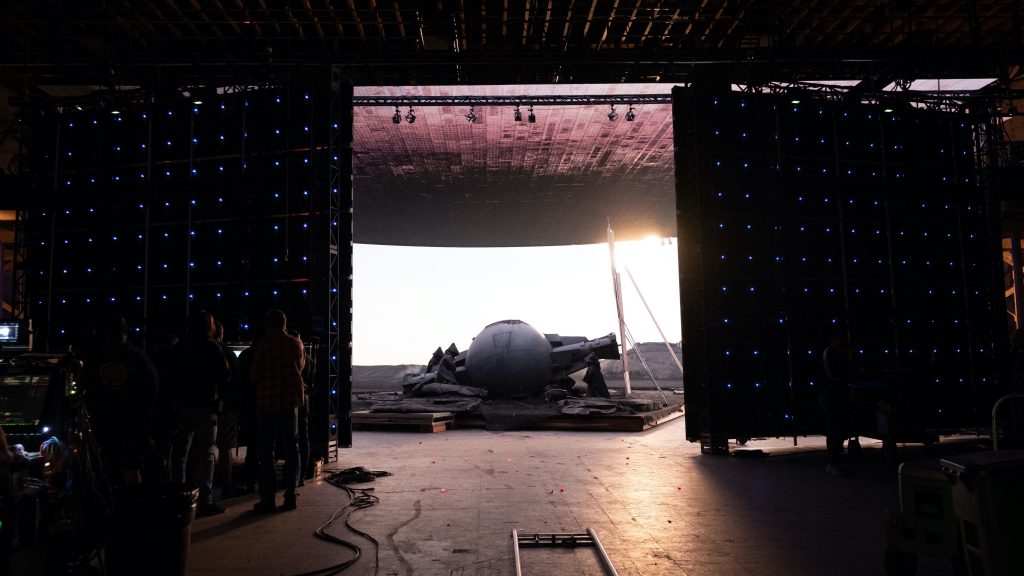 The end of the episode treats audiences to a special appearance by George Lucas, who visited the set, coffee in hand, talking to the crew about how advanced blue-screen technology was 25 years ago, and how what they can do now is truly remarkable. You can see the entire crew is stopped in their tracks watching him speak, and it is subtly very powerful.

Kathleen Kennedy and Jon Favreau both make it a point to say that George Lucas’s vision and imagination was always 10 years ahead of the technology. Bryce Dallas Howard referred to George Lucas’s ideas as “George’s garage” because she recalls Lucas years ago saying one day these films will all be able to be created in a garage. Well, George’s garage is finally here. He sold Lucasfilm in 2012, and here we are almost a decade later, seeing the next wave in filmmaking technology happen in front of his eyes, which he probably saw in his mind back then. 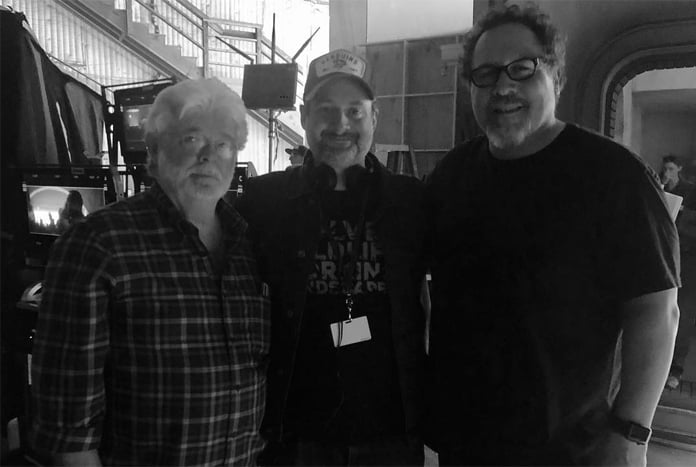 This episode is all about the technological advancements in visual effects for Star Wars, but what I took away most from it is that it helps make this galaxy far, far away we love so much feel that much more real, and I think we can all get excited about that fact.

Disney Gallery: The Mandalorian episodes one through four are streaming exclusively on Disney Plus, with episode five debuting next Friday. 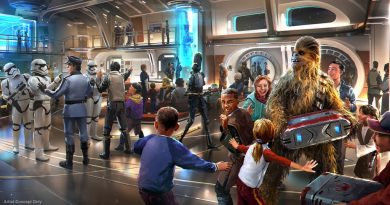 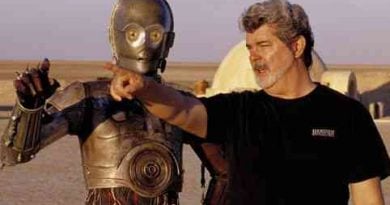 It’s A Wrap for Anthony Daniels on Star Wars: Episode 7. 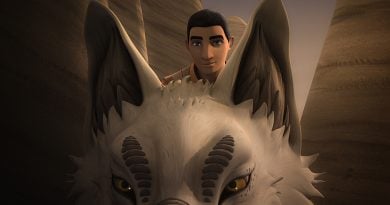