Editorial: The Rise of Skywalker Teaser Is an Emotional Medley of Nostalgia and Newness That Brought Me to Tears - Star Wars News Net Go To Top
Skip to content

Editorial: The Rise of Skywalker Teaser Is an Emotional Medley of Nostalgia and Newness That Brought Me to Tears

A quote that will likely hold as a staple for the recent trilogy of Star Wars movies, and I am selfishly taking it for myself, beyond the context of its purpose in the story.

I must admit, I don’t believe in reaction videos, I often think they are over-dramatized self-serving stage-shows of emotion. Someone knows a camera is on them and they immediately begin hamming it up. While not all reaction videos are disingenuous, that is my jaded view on them, and why I have always been turned off by them. And I am not saying I am right for feeling that way about them, I am just being completely honest with you. But before you paint me as a simple curmudgeon, I turned a bit of a corner recently thanks to The Rise of Skywalker.

I have never done a reaction video before, and never intended on doing one, then Star Wars Celebration happened. There I stood, at The Star Wars Show Live stage with thousands others, and we were about to get our first look at the long anticipated Episode IX. For whatever reason, my friend James Baney decided to flip a camera on us just as the clip began, and captured my honest reaction to seeing the trailer, Ian McDiarmid appearing on stage, and our second viewing. What I didn’t realize was how overcome I became with emotion, one of those moments where you do everything you can to keep tears from falling beyond the pockets of your eyes, stemmed from a conditional fear of embarrassment. I didn’t expect this reaction at all, so I am writing this to figure out why it happened.

I guess before I begin to try to get into the immediate array of emotional reactions I had to the trailer, here it is if you’d like to see it for context.

I am not very emotive in the first watch, I am so focused, and a bit tense, and I am chewing gum like a stock-broker on Wall Street during a market dive. It is almost hard for me to watch myself in general, let alone this chomping fool. I stop as soon as Luke’s voice begins echoing, which immediately called back to Obi-Wan reaching out to Luke in the cockpit of his X-wing as he hovered above the Death Star.

“We’ve passed on all we know. Thousands of generations live in you now. But this is your fight.”

The intro sequence with Rey makes up over half of the teaser, and I remember my mind racing, confused with what was going on in this scene. I developed so many questions as it was happening!

My heart raced, elevated by the screams of the TIE as it raced along the surface of the sands of whatever planet this was: Jakku? Tatooine? Jedha? Once Rey flipped my arms went up in awe, my first significant physical reaction…and then everything started happening really, really quickly.

My journey through the rest of the first watch was me doing my best to keep up with what was going on: mysterious ship, big city, Kylo Ren giving someone with no chance whatsoever a lightsaber hilt clothesline, the mask is back, Finn and Poe, BB-8 and a new droid, then my second big reaction came when I saw Lando and Chewie in the Falcon!

A few action shots, a medal, Leia and Rey’s hug, then our heroes, together, overlooking something, triggering my next big reaction, it’s the Death Star!

Luke Skywalker hits us with that line from The Last Jedi again, “No one’s ever really gone”, and my trailer-watching existence was forever changed in one moment, when I heard Palpatine’s cackle. Here is the exact moment that happened:

I lost my mind. I really couldn’t believe what I just heard, even though I had already been tipped that McDiarmid was backstage, but I was too in the moment to put two and two together.

My first watch of the trailer is not that exciting. My second viewing was where my mind, heart, soul, and body were completely overcome by all of the nostalgia and newness packed into this short teaser.

Watching the teaser again was like going on a new awesome rollercoaster for the second time. I know the twists and turns, the look of it, the big drops, the smells, how it ends, but my enjoyment is just as prevalent, if not moreso because I am no longer trying to process what’s happening, I am enjoying the ride.

I start choking up a bit after Rey’s flip when Leia’s theme starts playing. The familiar notes of John Williams’ original score hit me in the chest like a sledgehammer and I couldn’t hold back anymore. The next 45 seconds or so really felt like Star Wars, as if it were a living, breathing thing, giving me a wookiee-sized hug assuring me it is taking care of me (as weird as that sounds I really have no other way to explain how I felt in that moment, but I hope it makes sense to you). Between the music, seeing our new heroes, old heroes, Carrie Fisher, and the return of Palpatine, I was so happy I couldn’t contain myself. But it was one line slipped in there that really hit me the hardest.

“We’ll always be with you.”

In my first viewing I took this at face value – Luke Skywalker talking to Rey, letting her know that the Jedi will always be with her. But in that second viewing I started realizing what this movie also signifies…a final farewell to our original heroes. Is that Mark Hamill speaking to us the fans? Is this teaser J.J. Abrams’ way of setting the table for our heroes to give us one last bow on stage before the lights go down? If it is coincidental, then it is a beautiful one, but in my head-canon, I’d like to think this had at least some fourth wall breaking intent. Perhaps Abrams will let us know one day.

Looking back on that viewing I think that’s what really hit me the hardest. My original heroes and villains, the reason I fell in love with this franchise are giving us one last adventure, and even though this is it, they’ll always be with us. 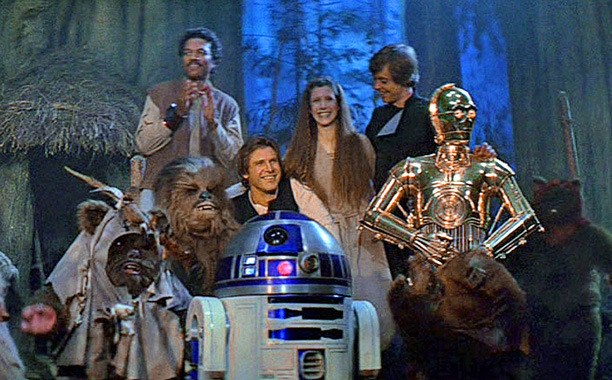 WE’RE IN THIS TOGETHER

Just as I shared this experience with thousands others on the show floor by The Star Wars Show stage, I asked fellow fans on Twitter to share their memories of watching the teaser for the first time, wherever they were.

Watching the trailer in the arena is something I’ll never forget. The energy in the room was electric- I could have jumped over a tie silencer. I got the most emotional seeing Lando flying the falcon. Seeing him on screen brought me to tears. THEN THAT CACKLE. Is it December yet?

Hearing Luke tell Rey that a thousand generations are in her now hit me in the feels, but something about seeing the Death Star II wreckage have me chills! – Then that cackle hits! – perfect teaser!

Even though I know he was talking to Rey, when Luke said “We’ll always be with you”, I took it as a send off to us as the audience and it brought water to my eyes.

The scene where Leia hugs Rey with tears got me the most pic.twitter.com/o4cGZvO4Tv

Several things hit me emotionally; Luke’s monologue was a perfect passing of the torch (bittersweet), Leila’s hug was hart wrenchingly beautiful, Lando in the Falcon filled me with joyous nostalgia, and the cackle at the end made me confused and excited!

Went a little something like this…. ah. Ooh. WOW 😱. Ooooh. Aw 😢 Haha 😁What?! What was that? Does that mean… oh shh shh we’re finally getting a title! What? But he just. What does it all mean?! OmG OmG it’s Ian McDiarmid! Yes!!

Rey’s back flip over the Tie Fighter did it for me. These are the Star Wars movies my kids are growing up with. In that moment I realized that Rey would be to them what Luke was to me. 😭❤️

I literally jumped out of my chair when Palpatine cackled, that had never happened to me before

I’ve teared up at every teaser trailer for the episodic releases since the Chewie we’re home trailer in 2015. Something was different this time though. Being surrounded by people who feel the same way, the music, and seeing Rey hug Leia made me a mess. Cried my eyes out.

Just the anticipation & seeing the Lucasfilm logo emerge, then Rey with Luke’s voiceover. I videoed the moment but my arms were shaking from pure excitement. Being in the panel live was so thrilling. It was a joyous emotional moment.

When The Last Jedi was in cinemas, my daughter was in utero. Being able to watch TROS trailer alongside her was amazing with its themes of family, friendship, redemption and belonging. I cheered, clapped and cried.

First off, thank you to everyone who tweeted these to me, and sharing their experience watching the teaser for the first time. It really captures that communal feeling I felt on the show floor at Star Wars Celebration that day, so this is absolutely incredible. Thank you! Reading through all of these, including the ones that didn’t end up in the article (you can view all of them in the comments of my tweet) have me thinking about that quote again.

We know the meaning it holds in the story for our beloved characters, but once again, perhaps it’s about the fans too. Star Wars can, and likely will, live on for generations to come – long after our parents are gone, long after we’re gone, passed on to the next generation each time a wonderful and exciting new story from a galaxy far, far away is told. Maybe we’re never really gone, because the unconditional love we have for this silly space opera franchise George Lucas created is seen through the eyes of our children, and all generations to come.