Hunter Always Gets His Prey in Age of Rebellion: Boba Fett 1 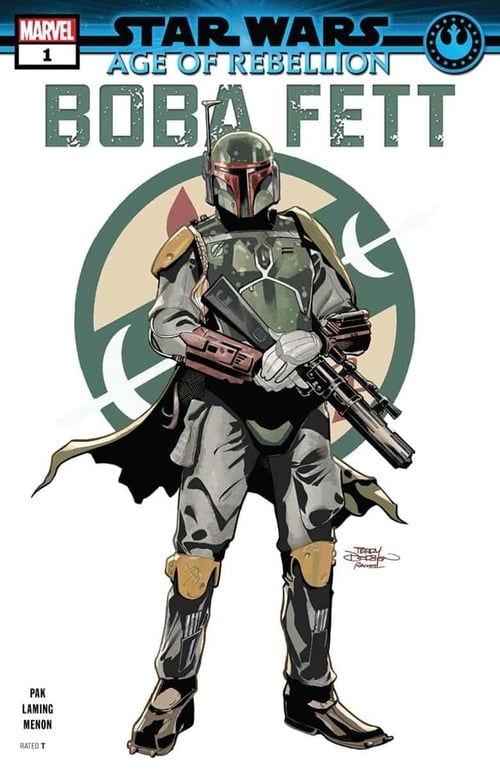 “HUNTER’S HEART” – Criminals across the galaxy tremble in fear at the mere mention of the name… Boba Fett. He is a bounty hunter without equal! What drives the man behind the Mandalorian mask?

Before he had close and personal encounter with Sarlacc thanks to half-blind scoundrel and a mechanical failure, Boba Fett was a bounty hunter in a cool suit of armor who talked back at Darth Vader. And maybe we didn’t need to learn who he was he a child, but we did and so here we are. The new canon has been consistently attempting to recapture some of Boba Fett’s old mystery and so the most interesting question about the bounty hunter now isn’t who is he, but rather how that boy, who in spite of his origins still had some semblance of moral compass and heart in The Clone Wars, become the ruthless man behind the mask.

This issue offers no answer, but all the ruthlessness.

The issue opens in the Outer Rim, on the planet of Carajam where a couple of scoundrels, blue-skinned alien Zingo and human Turfitch, are extorting a local woman. Things don’t look good for her as she recognized one of them. However, the sudden appearance of Boba Fett triggers fight (Zingo) or flight (Turfitch) response in them because Fett’s reputation precedes him. And even without knowing anything about him, you can see why. 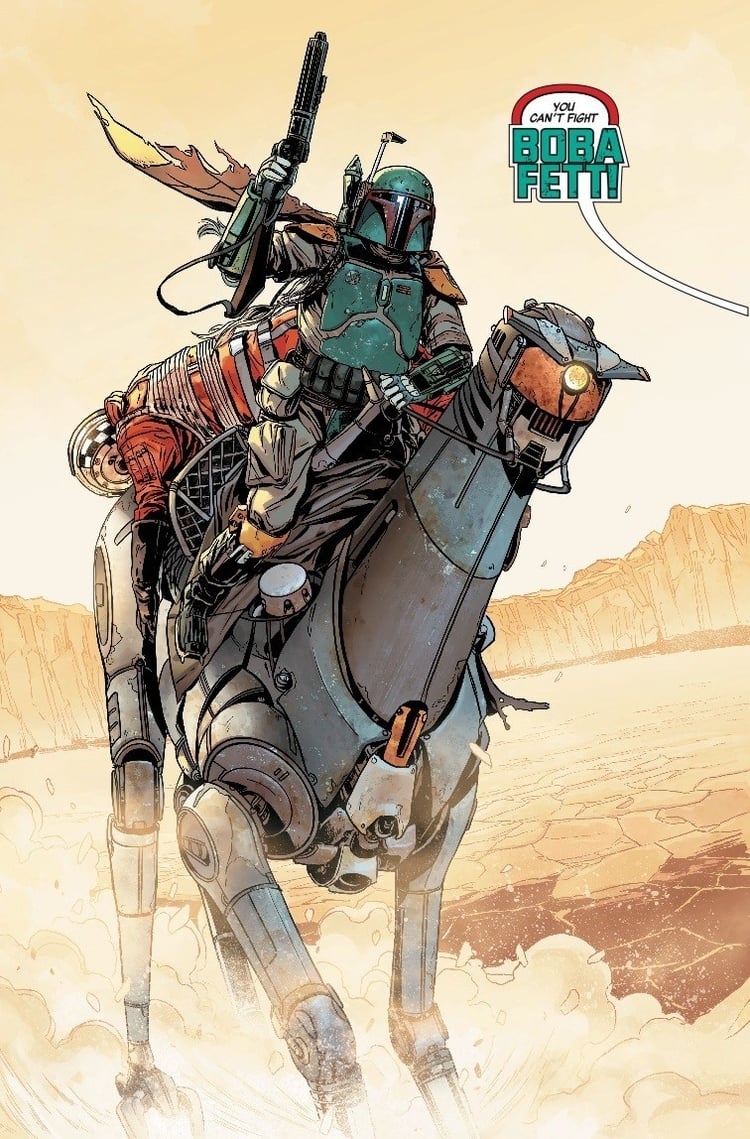 But, Boba Fett doesn’t have the two in his cross-hairs, so they take the opportunity to get away. Riding his mechanical steed and carrying his deceased bounty – a Rebel pilot – Boba rides into town and a local watering hole where scum and villainy gathers. He is paid for his job and immediately seeks another. And what do you know? Zingo Gabnit is also a bounty hunter with a huge bounty on his head posted by the Bounty Hunters’ Guild because he killed a couple of his colleagues and is marked by the Empire as a Rebel collaborator. Naturally, Boba is up for the job. 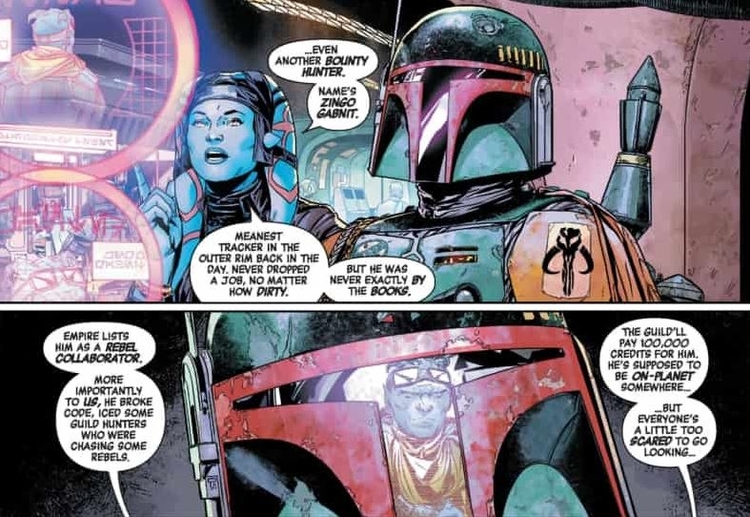 While trying to meet the rendezvous that will help him escape the planet, Zingo is caught in a dust storm. He is surprised by Turfitch – who went into town and learned that Boba Fett has picked up Zingo’s marker. Zingo is planning to cross the desert, meet with his partners on the other side and escape the planet. Turfitch protests they don’t have enough water, Zingo shoots him and takes it all for himself. Some time later, following their tracks, Boba finds wounded Turfitch who gives him the lead before dying. 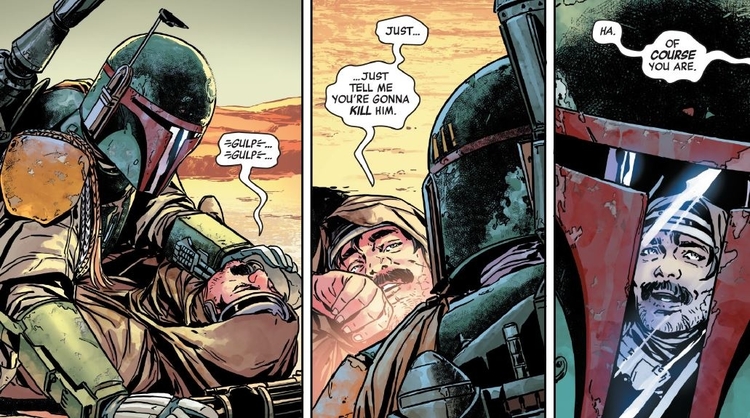 Using his legendary carbine rifle, Boba easily wounds Zingo. He wonders into the settlement and starts killing the inhabitants. When Boba arrives, he finds the survivors tied. He offers Boba three times more money. If he doesn’t accept, they would fight and the alien make sure that all the survivors die. Zingo has set a trap for the legendary bounty hunter, but Boba escapes the blast and we get to see a small demonstration of his prowess. 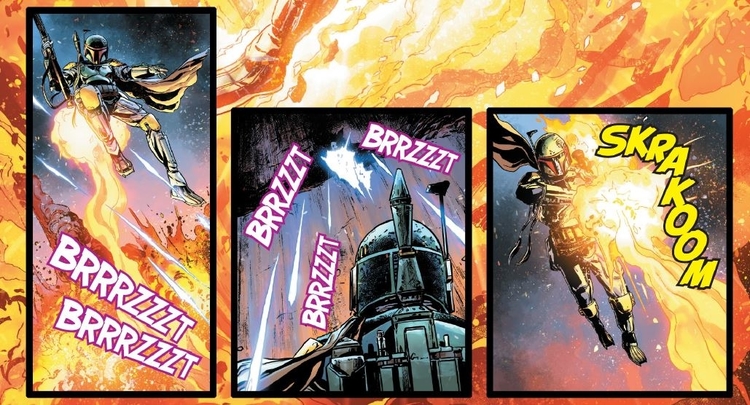 Boba kills Zingo and frees the settlement inhabitants. They are grateful to him, but he simply moves on, taking Zingo’s body with him. Back in town, Boba is greeted by onlookers. One of them is Stallo. Boba just left and unwittingly helped his sister’s village. Instead of leaving things be after expressing his gratitude, he tries to recruit Boba to help him deal with Zingo’s associates. It is unclear whether Stalo is flattering Boba or he really believes that the bounty hunter has more noble motives for hunting criminals, but he is quickly dissuaded of that notion when he becomes Boba’s prey himself. 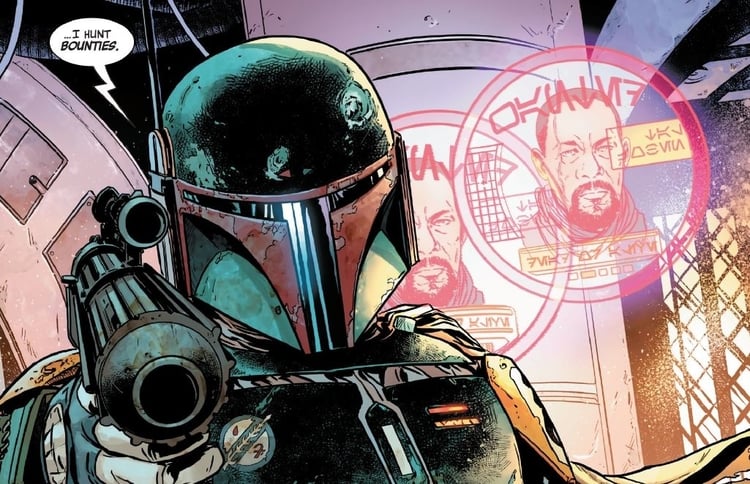 Whether you enjoy this issue or not would greatly depend on your expectations. If you wanted to read about Boba Fett being cool, precise and deadly, living up to his reputation – then you will certainly like this issue. Marc Laming’s art paired with Neeraj Menon’s colors creates suitable environment for a space western, through barren vistas and weird flora as well as colorful cast of characters. Frankly, that was a highlight of this issue for me – everything around Boba Fett. As straightforward as this issue is, I liked little touches Greg Pak seeded throughout the issue, like Boba’s mechanical horse or that one guy who for a second thought he could take Boba’s job (really funny). Zingo works for the Rebellion, yet he is a cold blooded murderer; Boba, who clearly goes for that Imperial money, is saving lives.

While I enjoyed this more complex look at the galaxy set within the microcosm of a single planet, the title is called Hunter’s Heart and that was the problem. To circle back to the beginning of this review, we don’t learn anything new about Boba Fett. His only motivation is the bounty? People are rarely that simple and I have a problem believing that a clone of Jango Fett who grew up with the likes of Aurra Sing is that simple. I would have liked to at least get a peak under the helmet, not literally, but metaphorically, and get a hint at what made the little Boba who was releasing kidnapped victims in The Clone Wars into killing machine of few words.

After, in my opinion, great predecessor in Age of Republic, the results of Age of Rebellion are mixed. With three more issues to go before we transition into Age of Resistance, let’s hope the creative team will hit their stride. But, that is for the future. 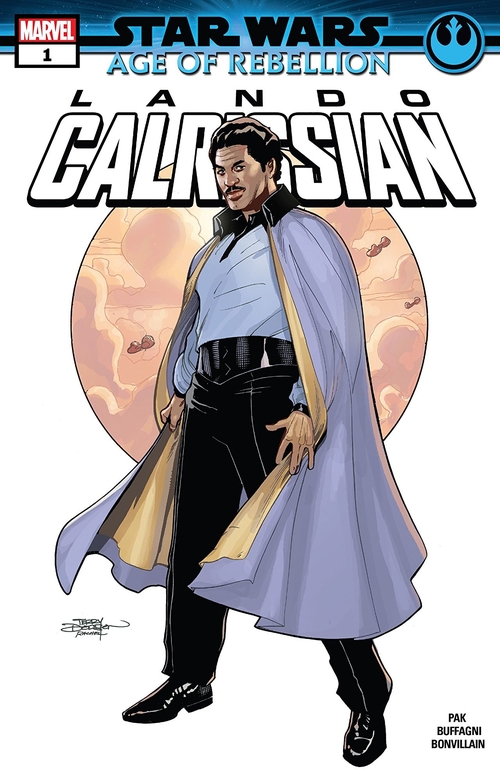