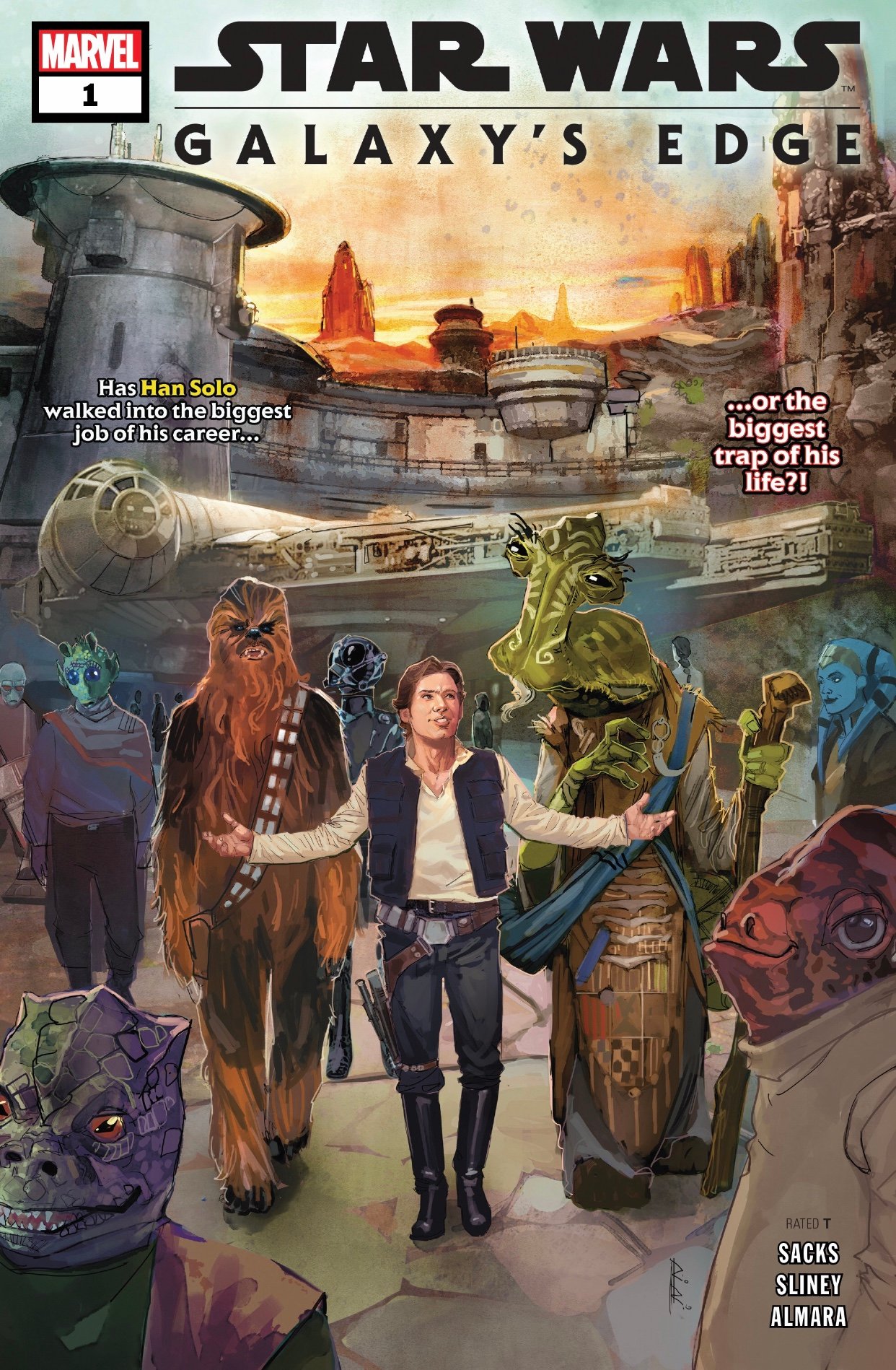 It’s been a long journey to Galaxy’s Edge, with small glimpses and stories about what may await fans when they reach the Black Spire Outpost on Batuu. Remember, Galaxy’s Edge isn’t just a clever name. Batuu sits at the edge of the known galaxy in Star Wars, near Wild Space and the Unknown Regions. This locale has a lot of catching up to do when it comes to the legends occupying remote worlds like Tatooine or Jakku but the folks at Lucasfilm and Marvel really roll out the red carpet with this first issue of Galaxy’s Edge and they’ve invited a duo synonymous with strange worlds and the unknown in Star Wars – Han Solo and Chewbacca. SPOILERS AHEAD…. 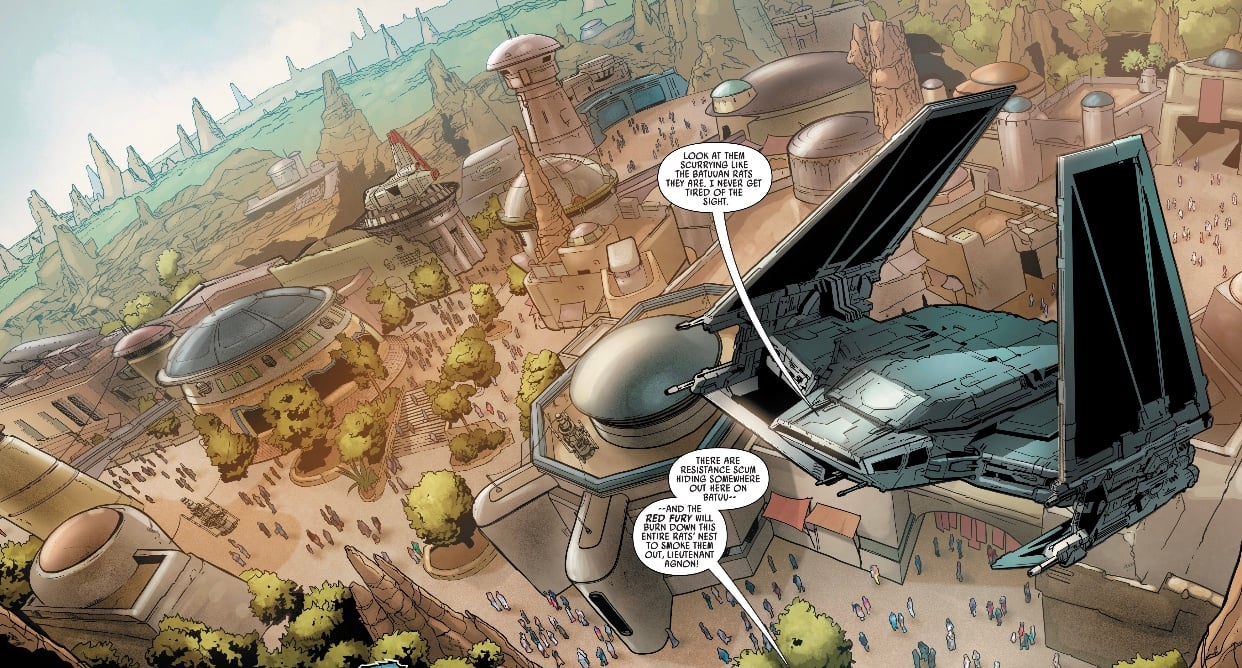 This inaugural issue opens as a Clawdite (changeling) makes their way through the streets of Black Spire, maneuvering street traders and people desperate for food. The opening pages aren’t so much a full tour of Black Spire as much as they are an introduction to the context.  Aboard the First Order craft, a squad called Red Fury vows to do whatever it takes to find the Clawdite and associates, proclaiming Batuu to be a rats nest of the Resistance. They intend to change Batuu forever. Coming from the First Order, that can’t be good. Please note, it’s not established whether this takes place shortly before The Force Awakens or just after The Last Jedi.

The First Order has placed a bounty on this Clawdite and his cohorts. We learn this Clawdite’s name is Remex, while the other two people wanted by the first order are called Kendoh and Wooro, who seem much less concerned with the arrival of the First Order than they due with the approaching tardiness of their appointment with Dok-Ondar, proprietor of Dok-Ondar’s Den of Antiquities. 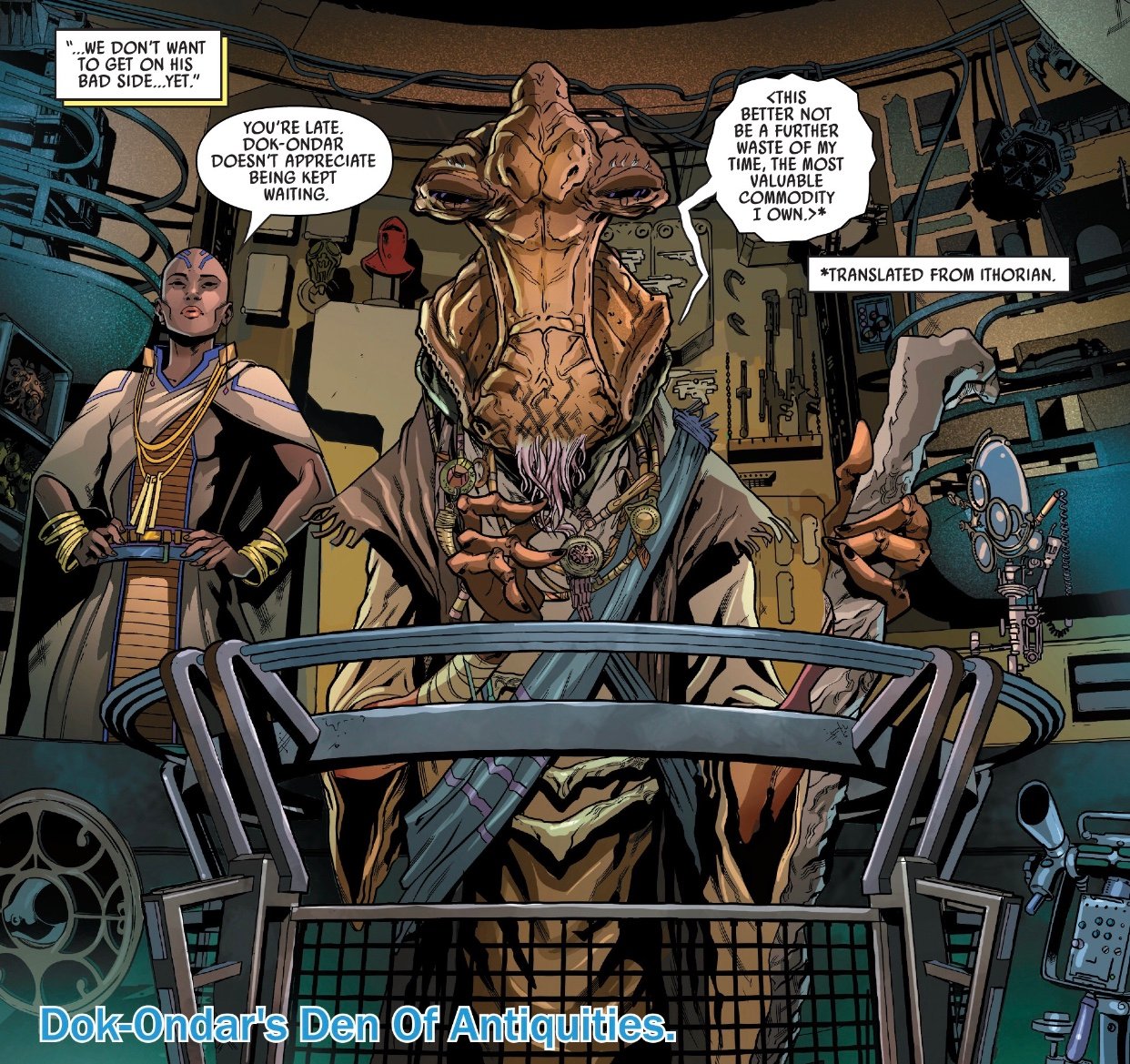 Writer Ethan Sacks seems to be setting the table for the arc of this series while simultaneously keeping the reader in the dark – and I like it! This has all the trappings of good folklore! A revered collector who runs a shop filled with mysterious antiques from all eras of the galaxy: Meet Dok-Ondar! That’s about all you will get to know about him in this issue. The Ithorian collector seems a bit more benevolent than other collectors we’ve encountered in Marvel’s titles – Sheev Palpatine and Grakkus the Hutt come to mind. Again, I’m just fine with being in the dark, as the sense of unknown and adventure overwhelmed me as soon as I opened the vibrant page of this issue. The trio have a proposal for Dok-Ondar and have brought along a chest full of credits, just enough to get his attention. Something in his collection gets their’s. 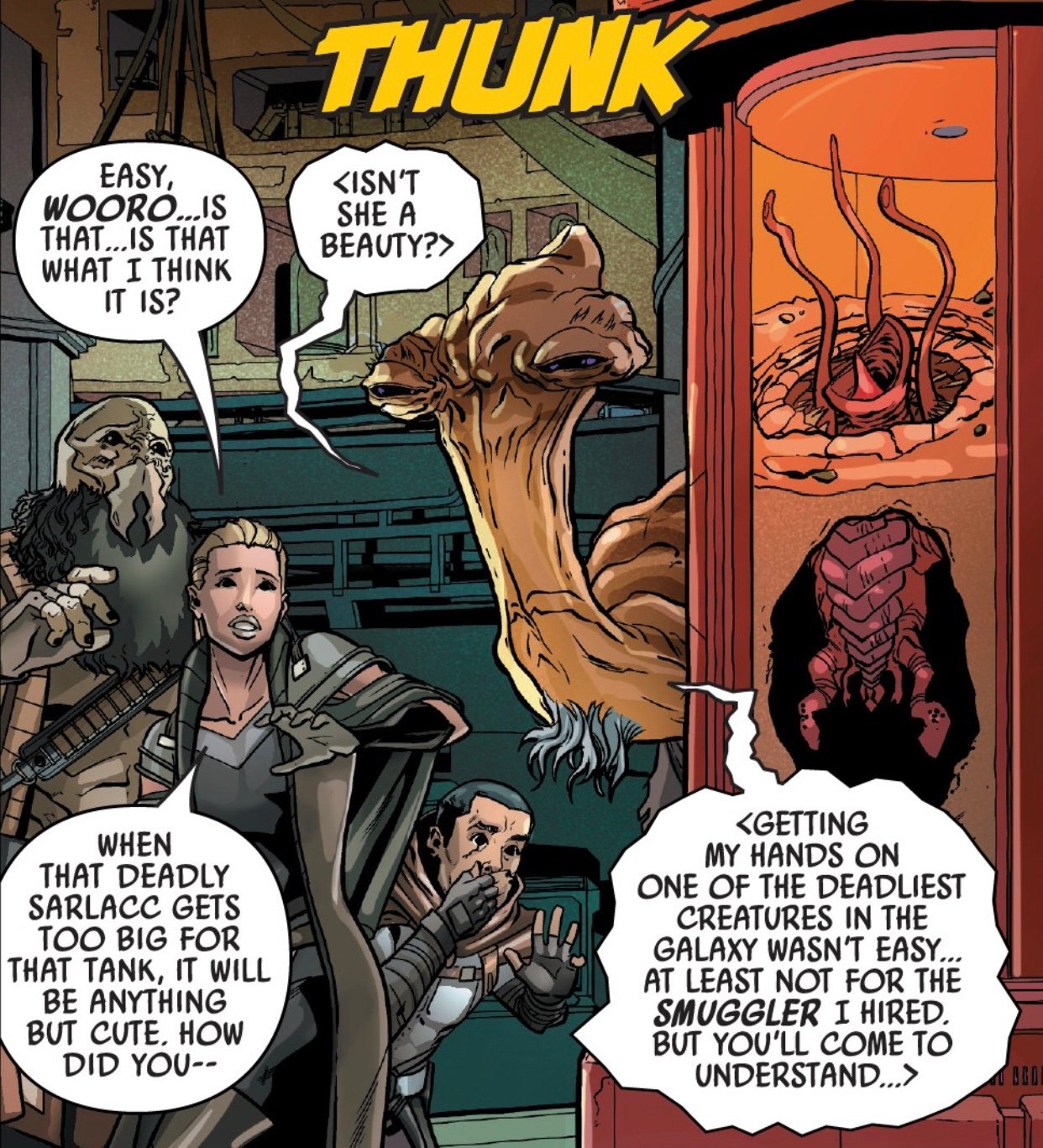 Now, I can’t tell if this sarlaac is taxidermy or if it’s alive but just the sight of it is enough to freak out these three so my guess is it’s a bit of both. I don’t know about you guys but I thought this was pretty cool. Pretty simple way for Dok-Ondar to present himself as the individual who can find anything in the galaxy – or at least hire the right people to get him anything. This little sarlaac has an interesting story of how it came to be in Dok-Ondar’s shop. 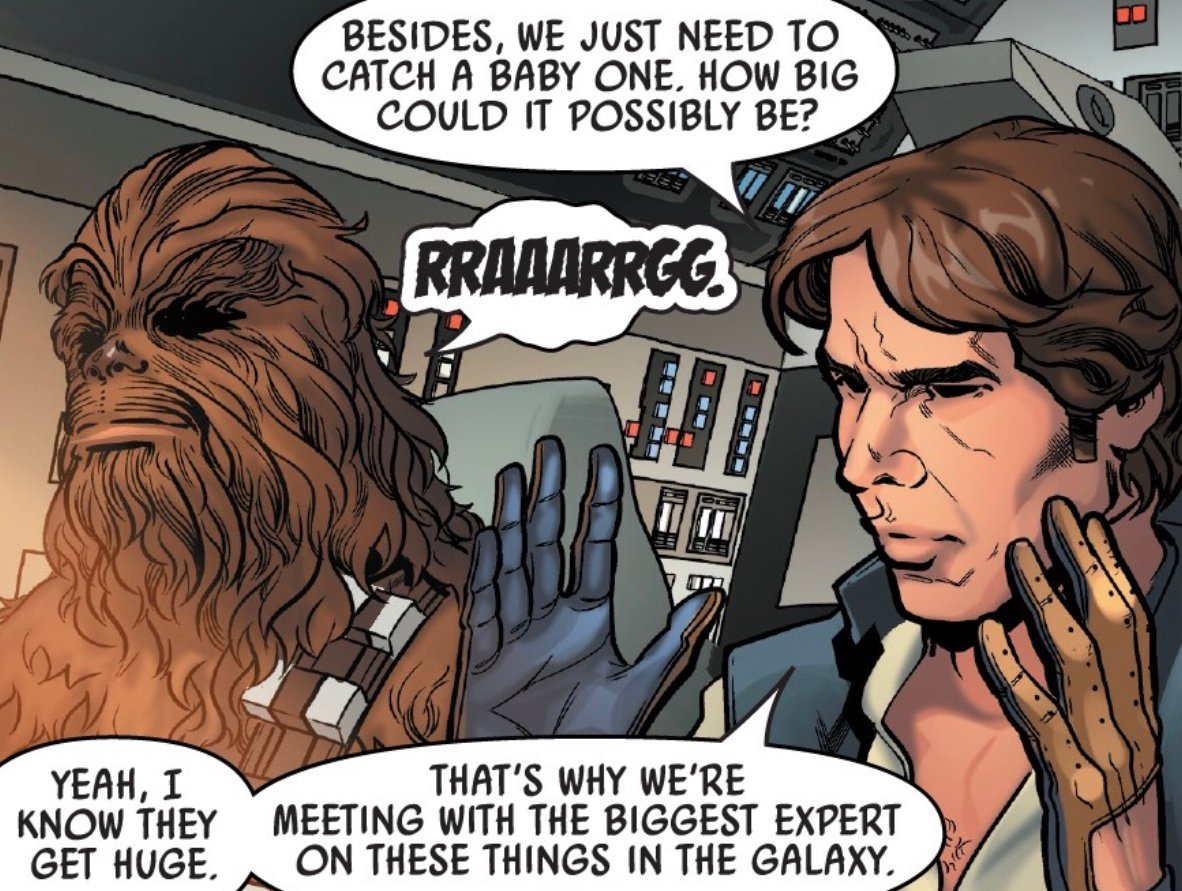 HAAANN SOOOOLLLOOOO! (in my best Maz Kanata impersonation) I never get tired of seeing these two and think it’s a perfect way to introduce us to the antiquities in Dok-Ondar’s possession. I also imagine sarlaac trapping is a good warm-up for rathtar hunting. Han and Chewbacca arrive on a highly-secured planet called I’vorcia Prime Preserve in the Outer Rim. The Millennium Falcon is only able to land on the planet because Dok-Ondar hired its pilots and provided them with access codes to bypass the planetary defense. Again, we have no idea at what point this story takes place, but my guess is it’s pre-A New Hope. Han and Chewie touch down to meet their contact, Dr. Genzhor, but instead are greeted by two people who promise to take them to him. What could go wrong? 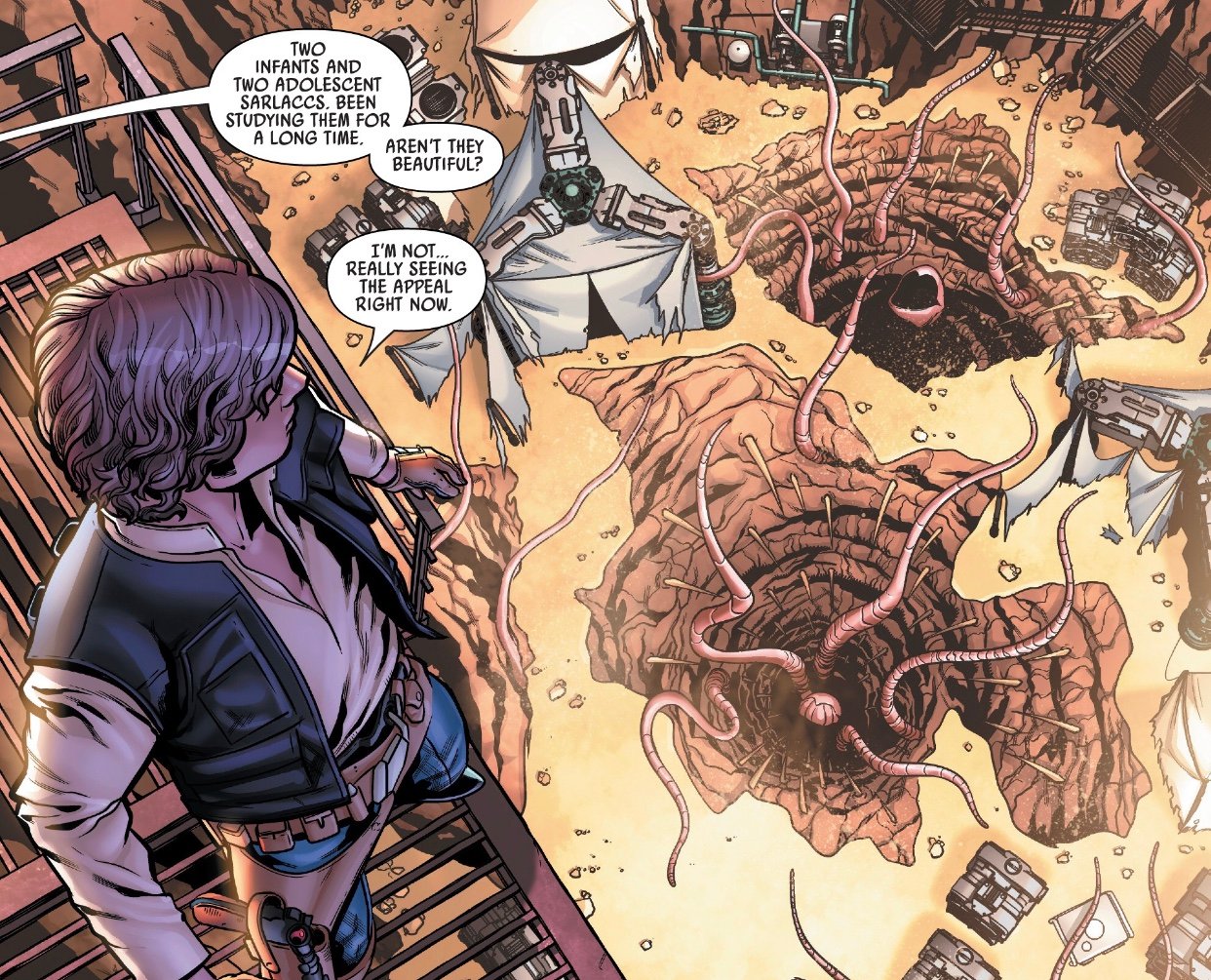 The only thing keeping Han from over a thousand years of suffering is this rickety catwalk. These sarlaac are referred to as adolescent. As Han gazes in horror at the sight of the galaxy’s most deadly predator, his guides kick him and Chewie off the catwalk onto the ground below, left at the mercy of the pre-teen beasts. The two guides were actively anticipating the arrival of the Falcon with Dok-Andor’s codes so they could use it to get off of I’vorcia Prime Preserve. Can’t say I blame them? Not only is this planet a breeding ground for sarlaac, it’s also been decimated by the Empire. Fortunately for our heroes, they’ve kept their blasters and are able to knock the would-be hijackers off of the catwalk. A shoot-out starts, but it’s not blaster bolts they should be worried about. 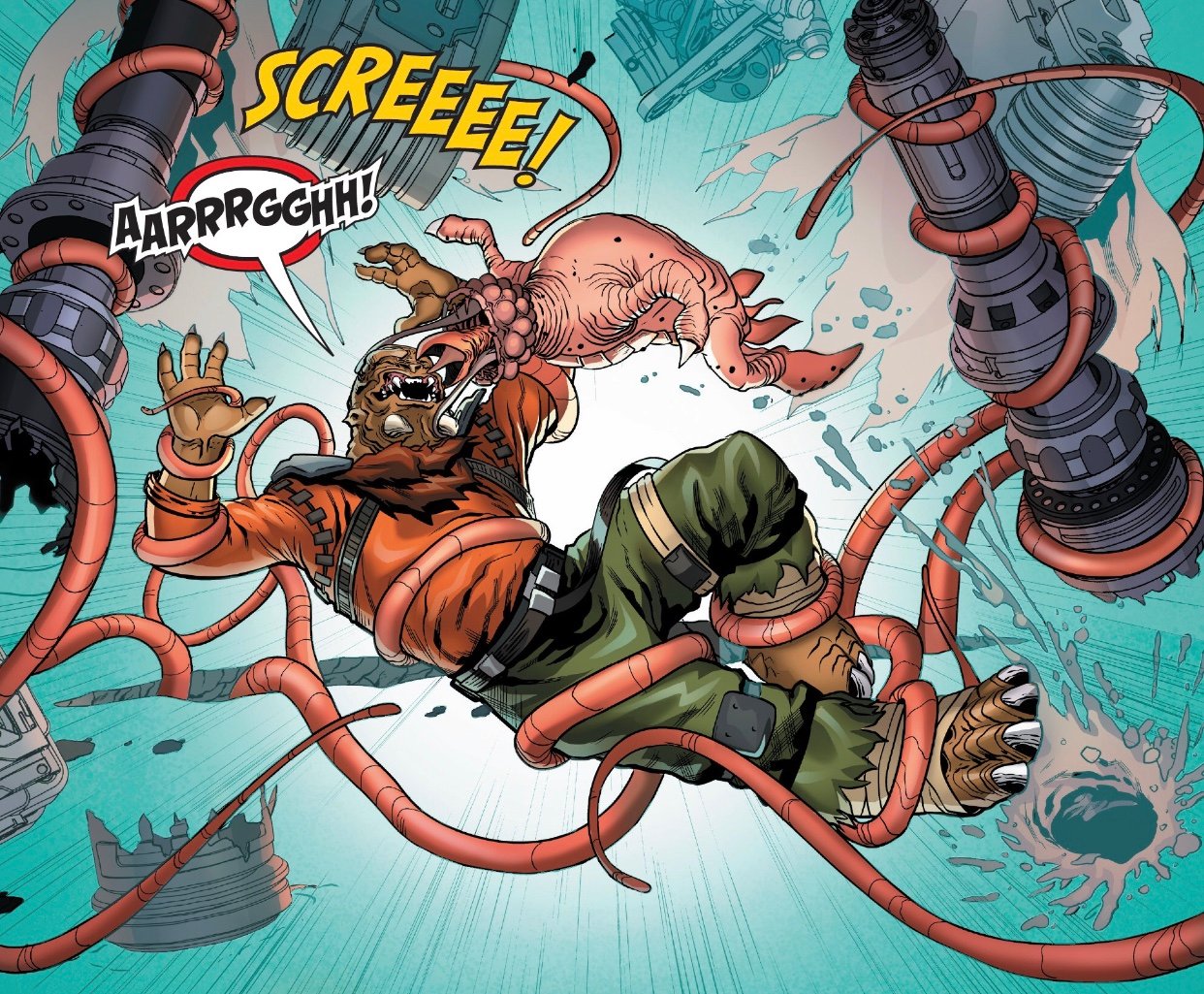 Behold, a baby sarlaac. Han gets a quick lesson in sarlaac physiology, as do the rest of us. Sarlaacs don’t nest until they are old, so while they’re young, they are mobile and learning to hunt. Quite a chase ensues, as Han struggles to keep these little monsters at bay, while Chewie dodges stun-sticks to get back to the Falcon. Chewie punches his way out of the predicament and gets back to the Falcon. A cool little note, it’s not easy to turn the Falcon on (unless you’re Rey), so Chewie’s able to get the ship back because on of the hijackers can’t get it started. Han is eventually cornered by the monsters on a steep cliff, until the best Wookiee co-pilot in the galaxy appears with the hijacker dangled below the Falcon as bait for the baby sarlaac.

The sarlaac latched right on to the bait and took it. Han and Chewie deliver this beast to Dok-Andor and we return to the present, where the trio of First Order fugitives listen to the tale.

They’re not interested in purchasing the sarlaac from Dok-Andor. Kendoh shows Dok-Andor a tablet with whatever it is they want Dok-Andor to acquire for them. We can’t see it but Dok-Andor sure knows what it is and wants no part of it. He kicks them out of his shop for even proposing it. They offer more money and Dok-Andor says there aren’t enough credits in the galaxy. As they leave, Remex plants a recorder droid under some relics and once they’re outside Kendoh mentions Dok-Andor took the bait. Back inside, Dok-Andor vows that he will not let a weapon that powerful fall into the wrong hands. I wonder what they want him to get or if it’s just a ruse to plant the recorder droid. This issue leaves us with a lot of questions.

I’m very excited about Galaxy’s Edge. This first issue did all the right things and I want the next issue right now. These new characters intrigue me and I really want to know what secret weapon they are after. The second issue tease mentions a lightsaber, so I’d like to officially put my guess in that if this issue took place before The Force Awakens it is the Rey/Skywalker lightsaber they are looking for. This would be the perfect place to tell that tale and it seems like Maz would be right at home in a place like this. If it takes place post-The Last Jedi, then it’s anyone’s guess. Writer Ethan Sacks gave us a great story to introduce this series and let’s hope the following issues continue to reveal what all of these characters are up to and what this weapon is. The art by Will Sliney and colorist Dono Sánchez-Almara is lovely, as well. This series has a lot of promise and I am confident it will do a great job introducing us to a world we will all have the opportunity to step into eventually. The next issue features Greedo! 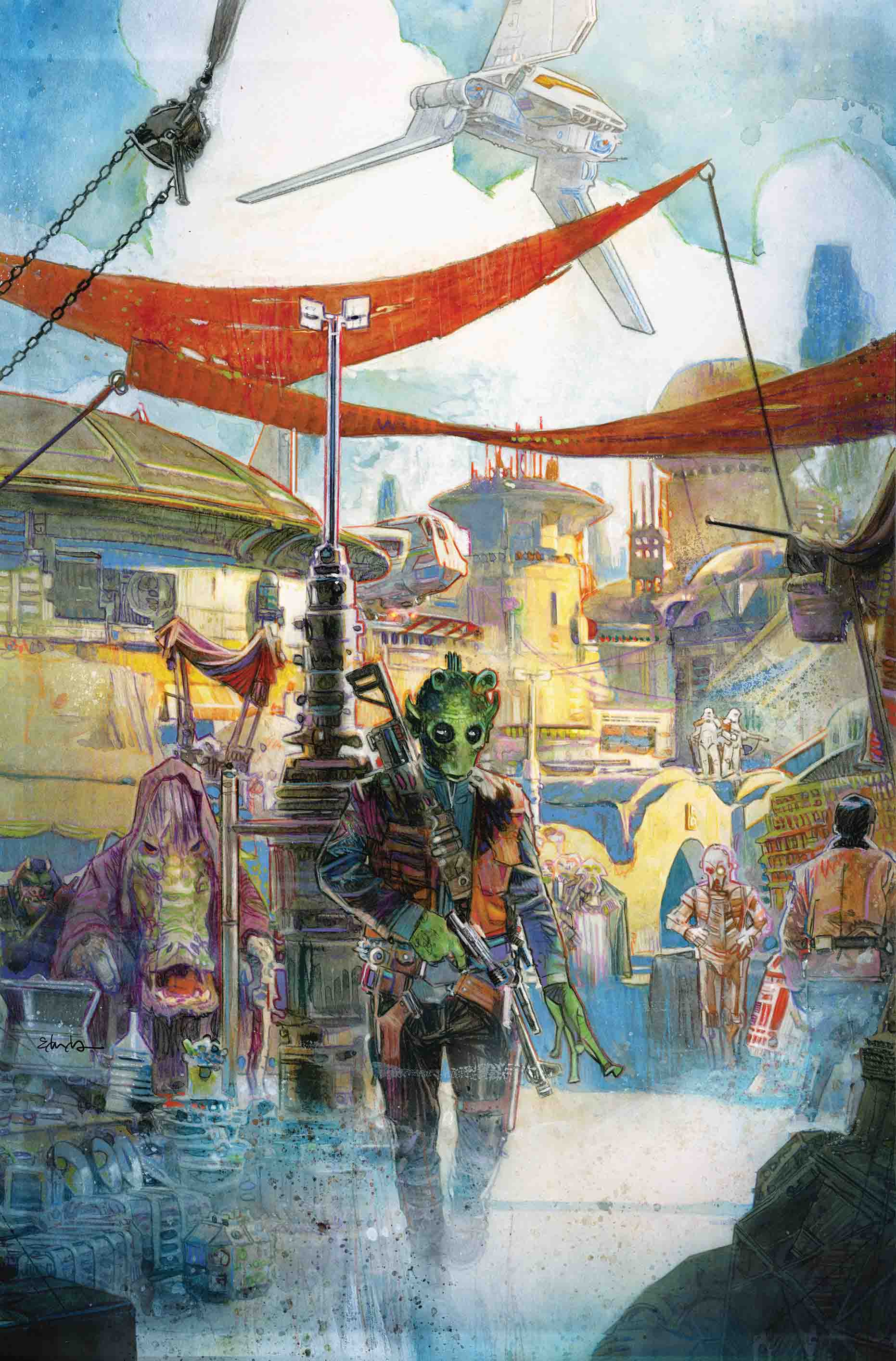