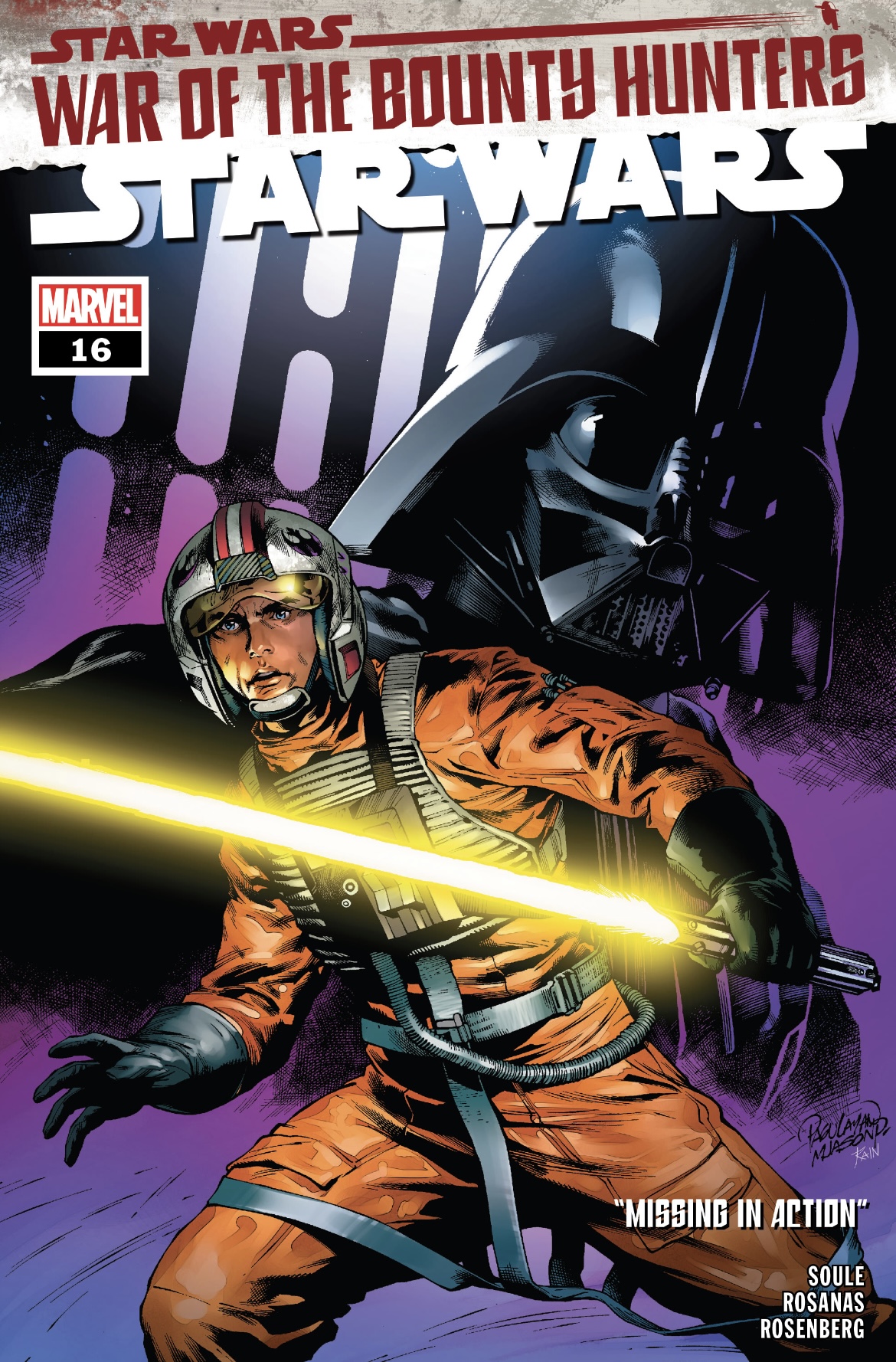 Luke Skywalker has been called back to the fight for Han Solo. He’s seen Vader use his friends to lure him and knows the Sith Lord will use this tactic again. Only this time, there are so many others standing in Vader’s way other than a pesky administrator of Cloud City. Leia, Lando, and Chewbacca have arrived at the Crimson Dawn gala, just in time to see Vader reaching the last obstacle between him and the infamous smuggler –  Qi’ra, trained in the fighting style of Teräs Käsi and holding her own against the Dark Lord of the Sith. SPOILERS AHEAD…

Luke is still haunted by his encounter with Vader. Questions about Vader’s fatherhood claim remain on the back burner for Luke, as he’s more concerned with the fear that’s overwhelmed him. In his vision of the duel on Cloud City, he ultimately triumphs over Vader, but fear aids the dark side and defeats Luke. His frustration with himself and his abilities in the Force also weigh on him. He admits he needs help. The obvious question to me: “Why not go back to Dagobah?“. I don’t envy writer Charles Soule at all, trying to write a compelling narrative for Luke’s growth while avoiding a big plot hole like that. Soule’s one of the best Star Wars writers around, so I’m guessing he has something planned. 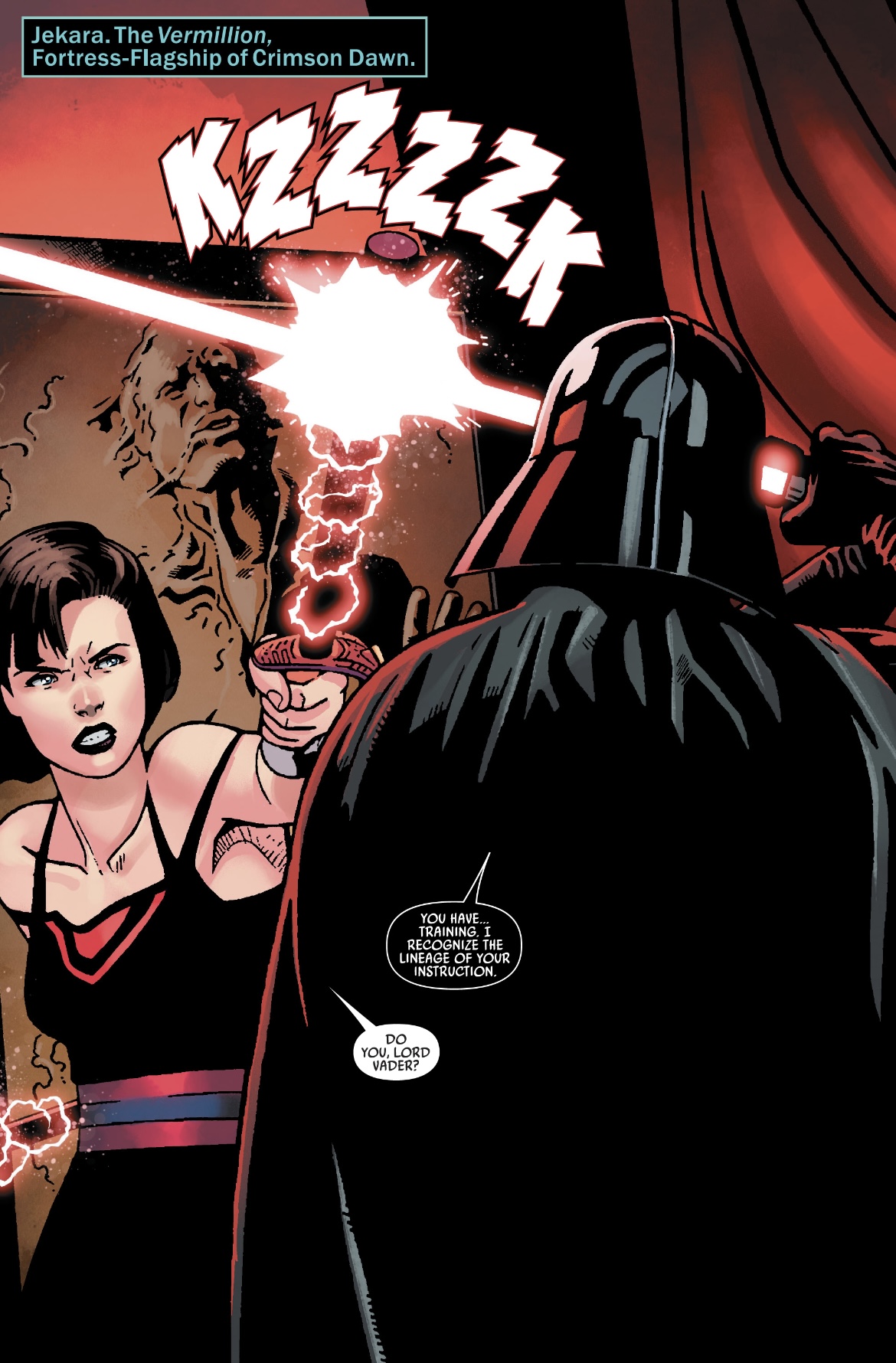 Mirroring the current issue of War of the Bounty Hunters (See Alex’s review here), Qi’ra steps up to Vader. We know from the Solo: A Star Wars Story – Expanded Edition by Mur Lafferty that Qi’ra was trained by Dryden Vos in the art of Teräs Käsi, a form of combat non-Force users can use against Force-users. Vader recognizes this training trickled down from Darth Maul, who in turn gained it from Darth Sidious. This fight is mostly happening in the background of the issue, but it’s cool to see nonetheless. Is Qi’ra fighting for her old friend and lover, or is she fighting for the profit she might make? So excited we are going to get more stories about Qi’ra and Crimson Dawn. While these two duel, other interested parties look on.

Leia is done messing around. After a brief explanation of who Qi’ra is (Lando leaves out some… finer details of Han and Qi’ra’s relationship), they weigh their options. A close encounter with Boba Fett has both Lando and Chewbacca cagey about charging both Vader and Qi’ra, but it hasn’t deterred Leia in the least. She’s ready to die fighting for the one she loves, not in any sort of irrational sense; she’s just tired of chasing, getting close, and then losing Han each time. Leia’s smart enough to know when a fight is futile, and she knows there’s only one person in the galaxy who might be able to stop Vader. Wasting no time, she contacts Luke. 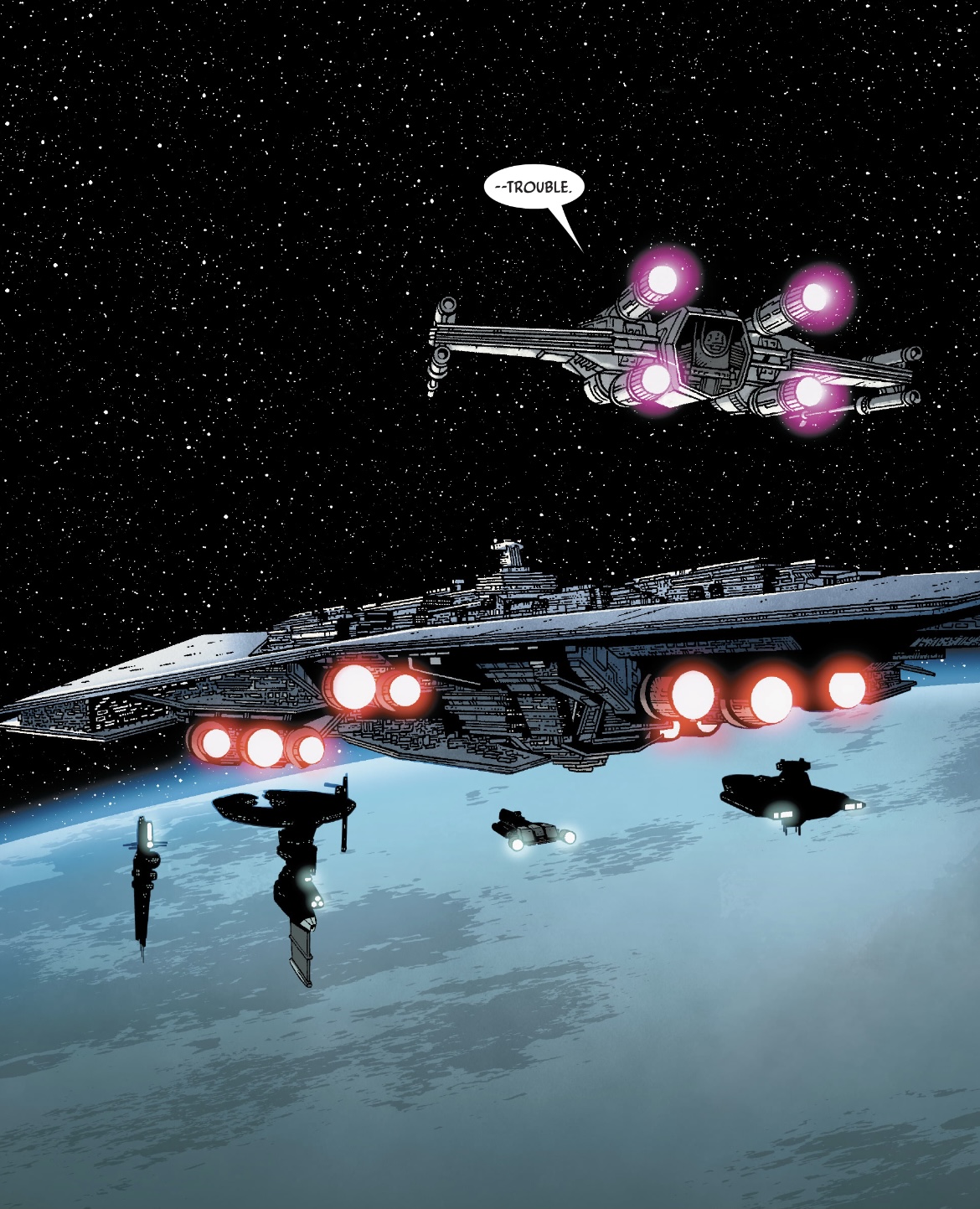 Luke’s just arrived and has some obstacles of his own to get down to Jekara. The Executor spots the X-wing and launches a horde of TIE Fighters at it immediately. Instead of engaging these fighters directly, Luke decides to make things more complicated for everyone. He leads the trigger-happy TIE’s toward the orbiting ships affiliated with various criminal organizations and bounty hunters, all of whom are just looking for an excuse to start shooting at the Empire. The enemy of Luke’s enemy might be an unwitting friend in this case. 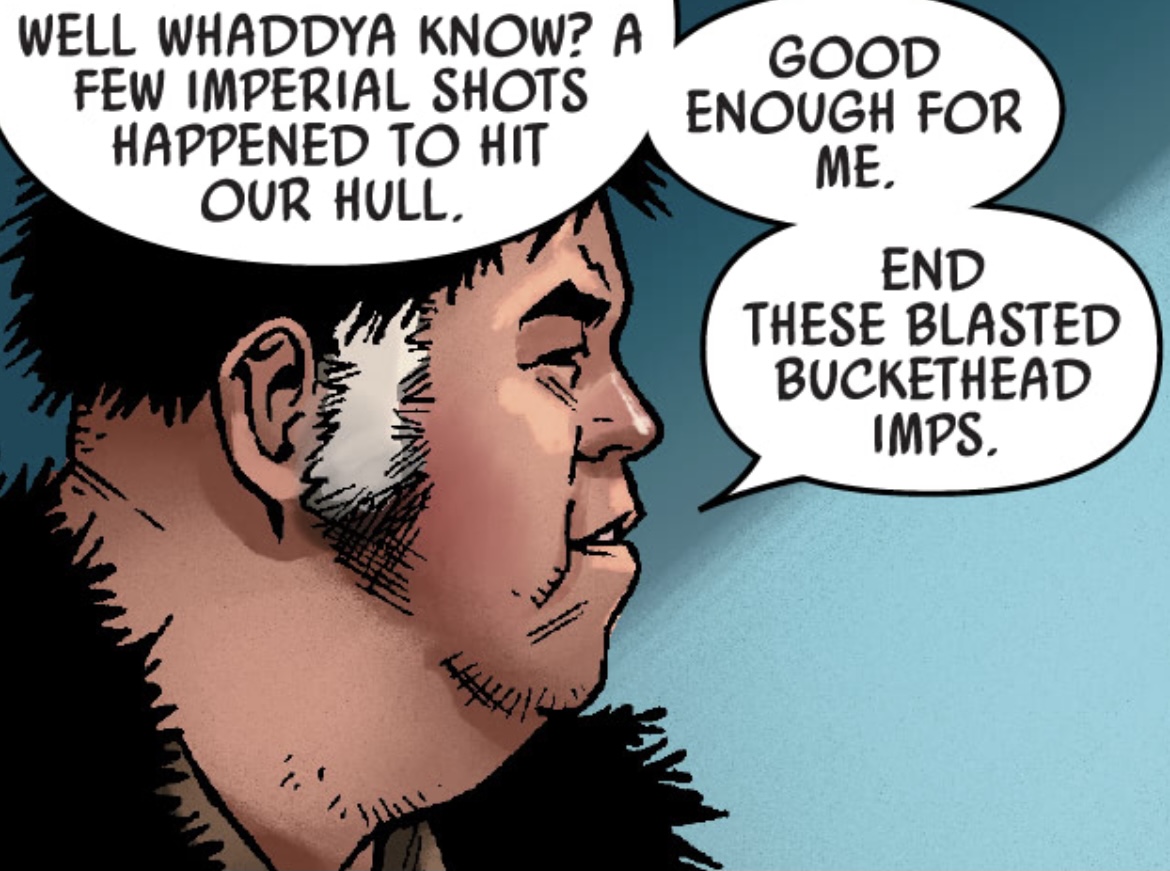 Look familiar? An ode to Declan Mullholand, the actor who originally played Jabba the Hutt in A New Hope, captains the Dark Syndicate. He’s excited about the possibility of engaging the Empire, and once Luke arranges for a few shots to hit his ship, he happily joins the fight. It’s a great throwback by artists Ramon Rosanas and Rachelle Rosenberg.

Vader is about to finish the fight with Qi’ra. A very anxious Leia looks on and realizes once Vader is finished there, he’ll turn his blade on Han. Just as she reaches out to Luke, the dark lord senses his arrival and turns all of his attention toward capturing his son.

As the Empire turns its weapons away from Luke at Vader’s orders, father reaches out to son through the Force. Luke’s overwhelmed by fear. When Vader describes what he’s going to do to Han, Luke sees himself dismembered and dying back in Cloud City. The trauma of the fight is still very heavy on Luke, fostering a strong fear of fighting Vader again. Soule is doing a great job of digging into the nuance of Luke’s state between The Empire Strikes Back and Return of the Jedi. Luke’s transformation between the films was something I looked forward to when Marvel announced Soule would be writing this series. It’s been terrific to see Luke has a tangible journey to that black-robed badass walking into Jabba’s palace. Rising above fear and coming back stronger. 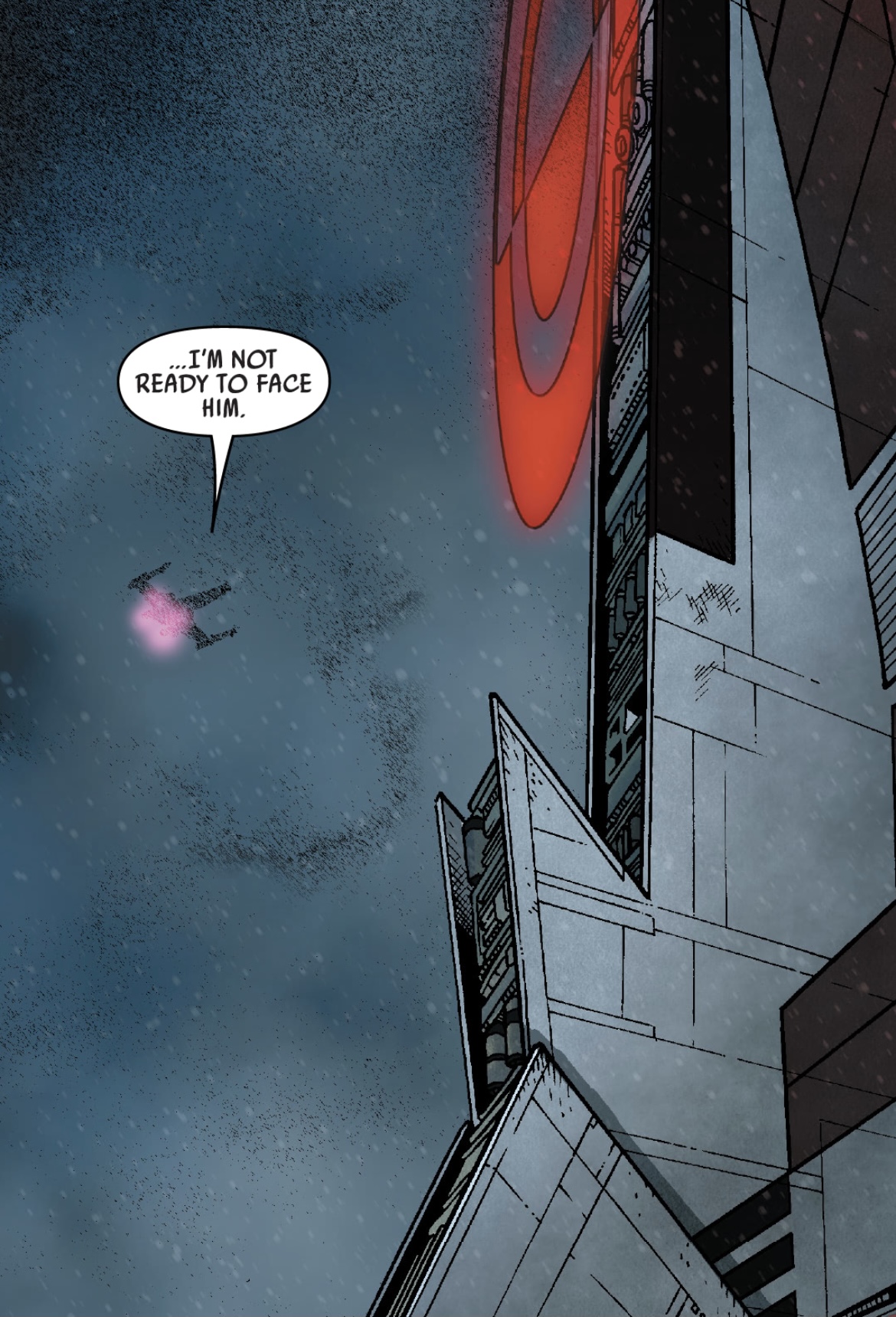 Not today, though. Even as Leia calls for help and Luke knows Han’s life is in imminent danger, Luke can’t face his fears. Shockingly, he turns away, and we’ll have to wait until the next issue to find out where he’s going.

Luke Skywalker, the myth, is being deconstructed frequently. And that makes me happy! I’m glad we are seeing the humanity rather than the basic dichotomy of naive farm boy or Jedi badass. I know this is War of the Bounty Hunters, but I’m grateful there is still time for more fragile scenes like these. Not much happens in this issue, but that’s not a bad thing. As mentioned before, it packs some solid art from Ramon Rosanas and Rachelle Rosenberg. Writer Charles Soule continues to do a great job stitching these events together across so many different series for one massive event, while still finding time for the quiet moments. 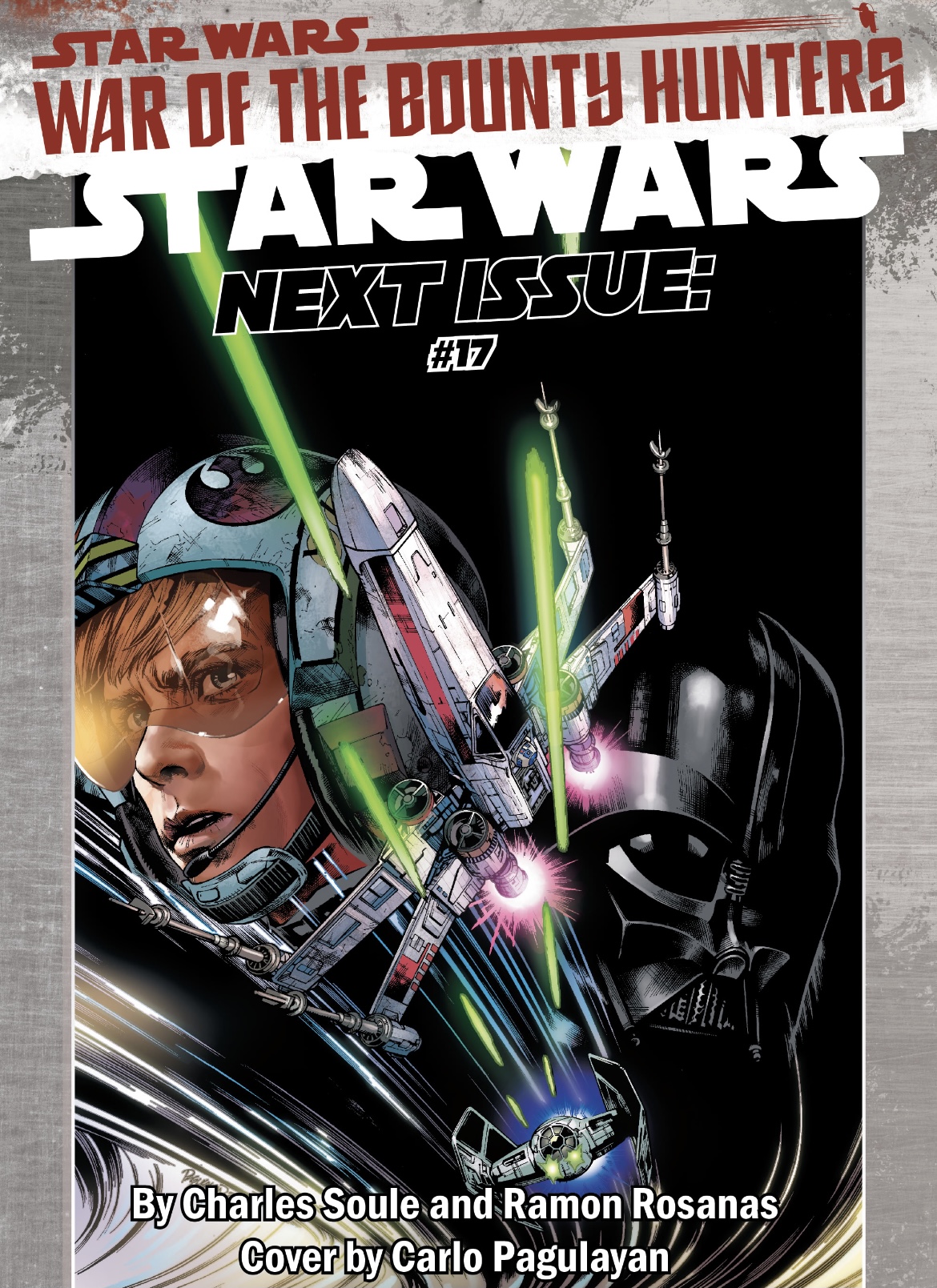