Pablo Hidalgo Talks About the Star Wars Cartoon That Never Was. 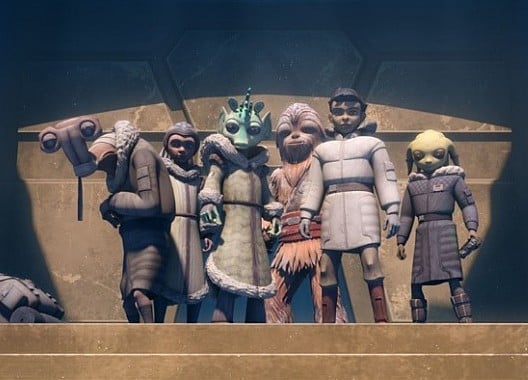 It’s no secret that The Clone Wars got increasingly dark as it went on, and a fan-favorite story arc involving Jedi Younglings was a lighthearted, welcome respite from what was becoming an increasingly serious show. What you might not know is that those four episodes were originally envisioned as a potential launching pad for an animated spin-off aimed at younger audiences, a decision which was considered (but ultimately rejected) by George Lucas himself.

Lucasfilm Story Group maestro Pablo Hidalgo recently had a series of tweets discussing the odd nature of production numbers for the episodes of The Clone Wars – with the short of it being that there are more episodes in the show’s production seasons (25-26) than there were in the actual broadcast seasons (22), thus leading to a discrepancy in viewing order. Nearly half of the episodes in Season 5, for instance, would have been included in a Season 4 broadcast if these numbers had been the same. If you’re interested in finding out more about technical details behind the development of that show, then you can check the beginning of the tweetstorm here. However, the important part, regarding the animated spin-off that ultimately didn’t happen, starts here:

George put them together as a movie & sat in on a “test” screening of them at Celebration, a screening that encouraged parents & kids to go

Whoops. One important typo. Production season is 26 episodes, not 25. Sorry about that.

@Halabrew Who knows? At that point, you’re kind of at the mercy of the broadcast outlet and what it is they buy.

The event in question that this story-arc-turned-pilot-movie-turned-story-arc-again would have aired at most likely would have been Celebration VI – which, for frame of reference, was the Celebration where fans were excited about a different animated series (Star Wars Detours) which would later be cancelled before a single episode was aired. That another animated series was being considered for development around the intended midway point of broadcasting The Clone Wars isn’t necessarily that surprising, but the fact that Lucas was in the process of negotiating a deal with Disney while this was happening is probably the most interesting detail. Had things gone a bit differently, perhaps they could have worked out a deal where they would finish all of the remaining episodes of The Clone Wars before The Force Awakens had been released. In any case, it has been good to see The Clone Wars Legacy give closure to many of the stories that were not fully animated.