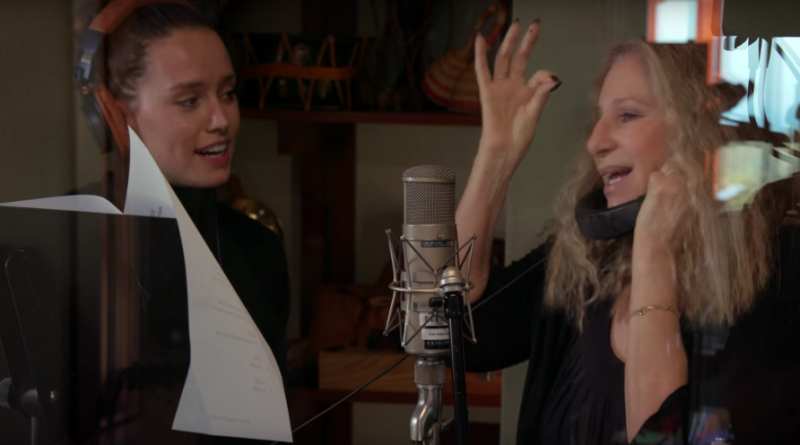 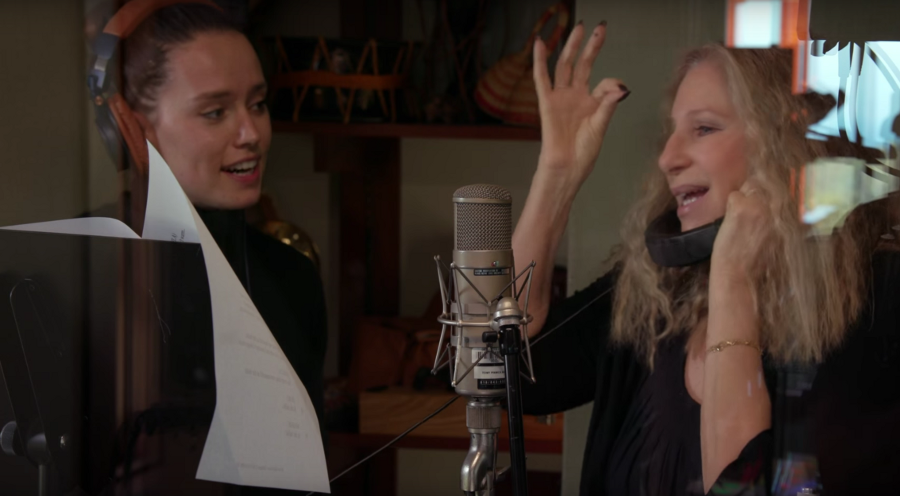 This week we have some more funny tweets from Mark Hamill, the official release date of Star Wars: Rebels season 2 on blu-ray, a surprising Star Wars Legends character makes it on a new Celebration poster, Daisy Ridley singing together with Barbra Streisand and Anne Hathaway, more from John Boyega and of course Pablo Hidalgo…

Our friend Le Jedi Lorrain made an interesting discovery on this new Star Wars Celebration poster:

Yes, that’s right. That’s Admiral Thrawn in the blue circle. Keep in mind though that this poster features all kinds of Star Wars characters – characrters from the new canon and characters from Legends. Even there are characters that are not Star Wars related at all. But still it’s cool to see the military strategist making it on the poster.

Mark Hamill is working really hard on Episode VIII. 14 hour working days sounds like a lot of Luke Skywalker in the movie! Great news for all of us.

14 hour days are never easy but cautiously optimistic w/ the results-Maybe a cold shower would get me jump-started! pic.twitter.com/hXzyE5lhXn

It appears that Hamill is “HUGE Oscar Isaac fan”. Will they meet in Episode VIII? Wait for it. 🙂

Mark has a new toy. It’s weird to keep your father’s head at home, right?

John Boyega and Mark Hamill were together at the opening of the Aladdin Musical in London.

Mark’s reaction to the 2 Suns discovery from NASA:

Magic Leap (a company about Virtual Reality) has announced their new project:

We’re teaming up with #Lucasfilm to bring the force to the real world.https://t.co/ANgvFsVVvI

More on that story HERE.

Some tweets about the now open Disneyland Shanghai:

I knew today was going to be a special day here at Shanghai Disneyland, only I didn’t realize just how special… pic.twitter.com/GUGmJrYsXR

The Disney’s new Shanghai park, the sixth in the world, officially opens its doors to visitors pic.twitter.com/mdPrlwl3fP

This is an aeriel view of Shanghai Disney Resort with a Magic Kingdom-style theme parkhttps://t.co/8VdULcLmYn

AND THEN THERE’S THIS! Literally can’t believe it happened. You can pre order the album at http://smarturl.it/streisandENCORE with an INSTANT DOWNLOAD of At The Ballet 🙈🙈🙈 @barbrastreisand @annehathaway dreamy dreamy dreamy🙌🏻🙌🏻🙌🏻 #BarbraENCORE

Enough singing, let’s get back to business 🙂

#FRIDAYFITNESS IS BACK! Yes! For one week only… Cause got acting to do innit! Featuring Dr Buckle (cause we are lucky enough to have chiropractors keeping our bodies tuned up!) also featuring my first time doing get ups!!! Felt so athletic eeeeep! #youcantellitgotrealwhenthevestcameoff #dancebreakcausewehavetopbants #literallyhadthereddestfaceattheendofit @gravzy12 smashing the workouts for REAL!

John Boyega proves once again that he is the best kind of celebrity and human being, visiting his local children’s hospice Demelza for a Star Wars party:

A few days ago we posted on Twitter a warning message about Twitter member KY10REY, who has been constantly fabricating stuff about Episode VIII and misleading the fans. We did that because some sites started picking up his stories, and we wanted to prevent another Supershadow, since we knew that this guy is not involved with the production in any way. Some sites even posted interviews with this guy, which resulted in another post by us on Twitter trying to warn people that he is false. Then we got an unexpected help. 🙂 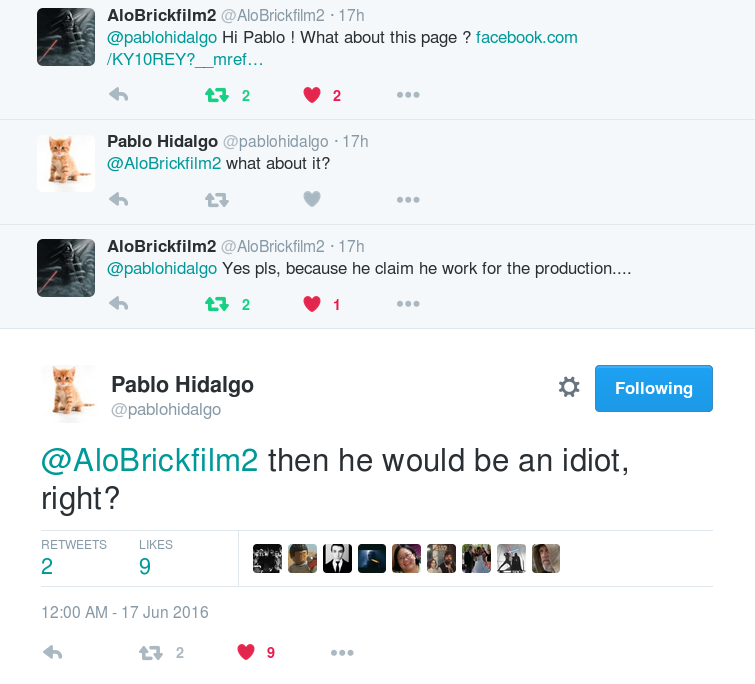 In the last few weeks there has been an increased number of fake posters on different forums and social networks, so be careful. Some of their fan fiction might be pretty good, but this doesn’t make them legit.

As someone said on Twitter (and later removed it):

There’s a fine line between making shit up and making up shit.

And now some more tweets by Pablo.

On the Rogue One reshoots:

@yak_face @SWKidscast RUMOR: reshoots are to align film closer to the cake. 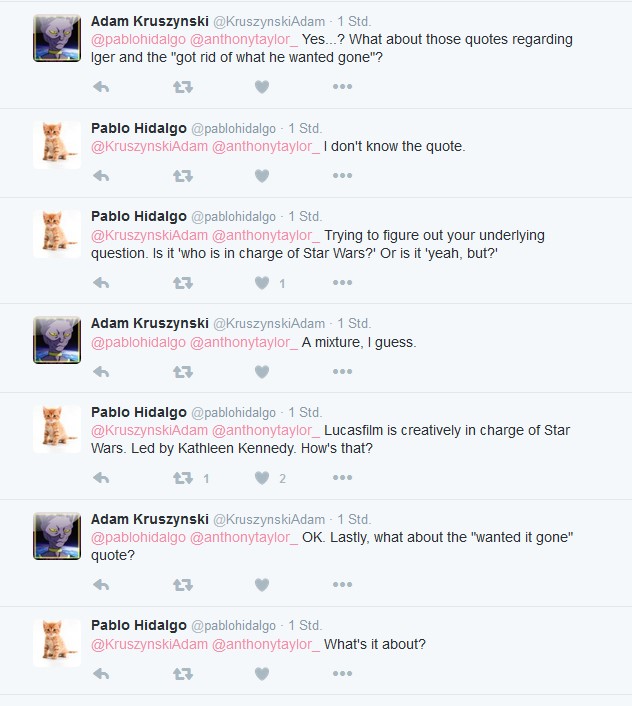 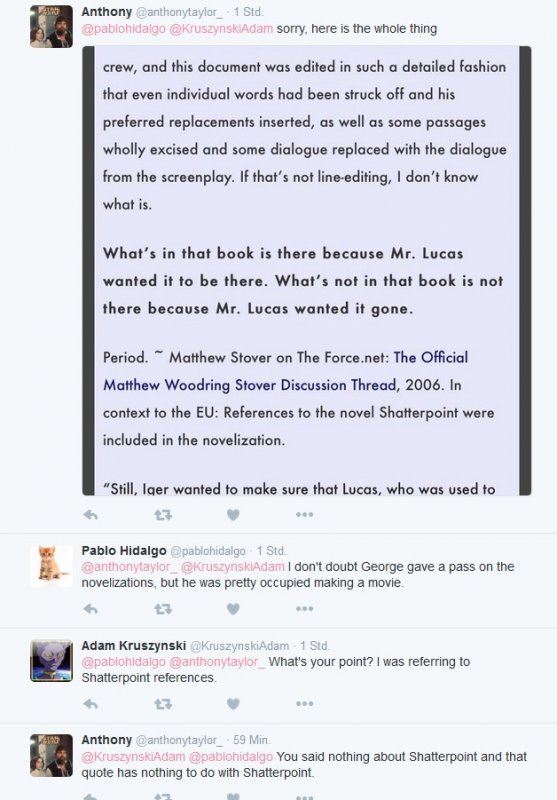 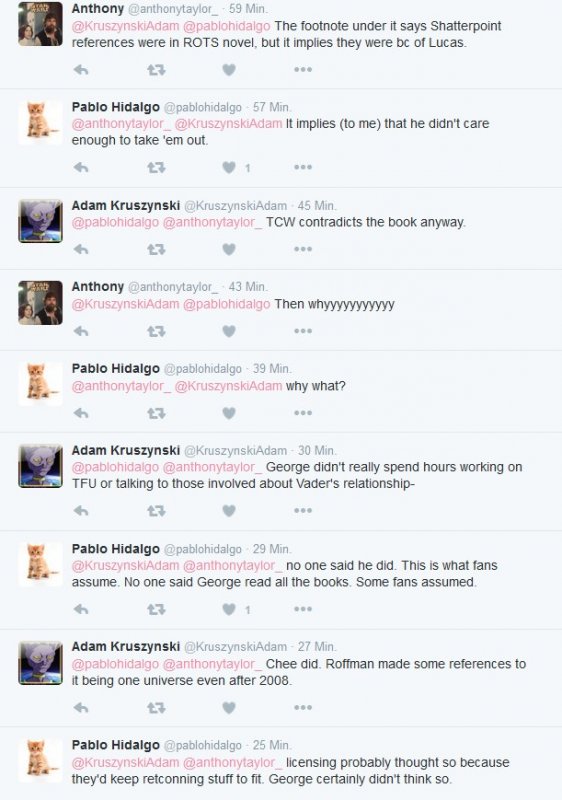 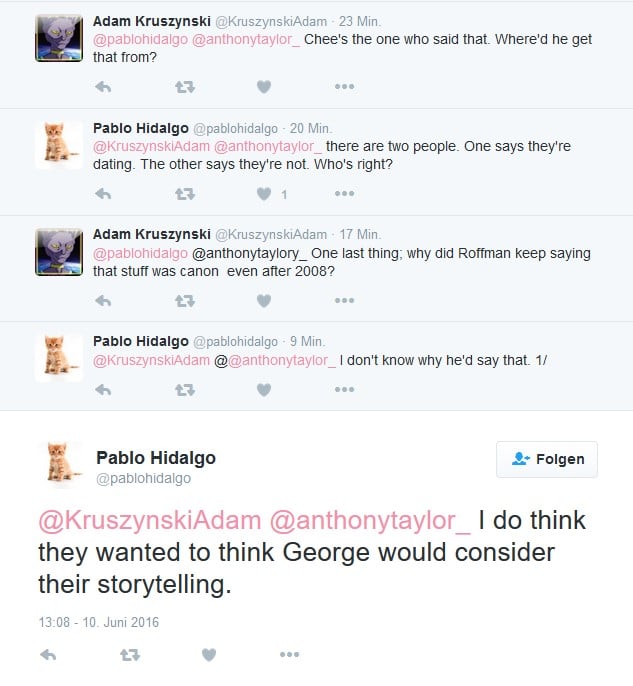