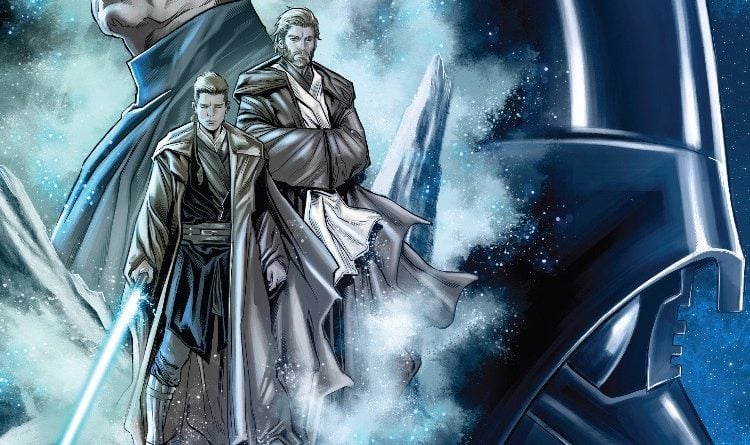 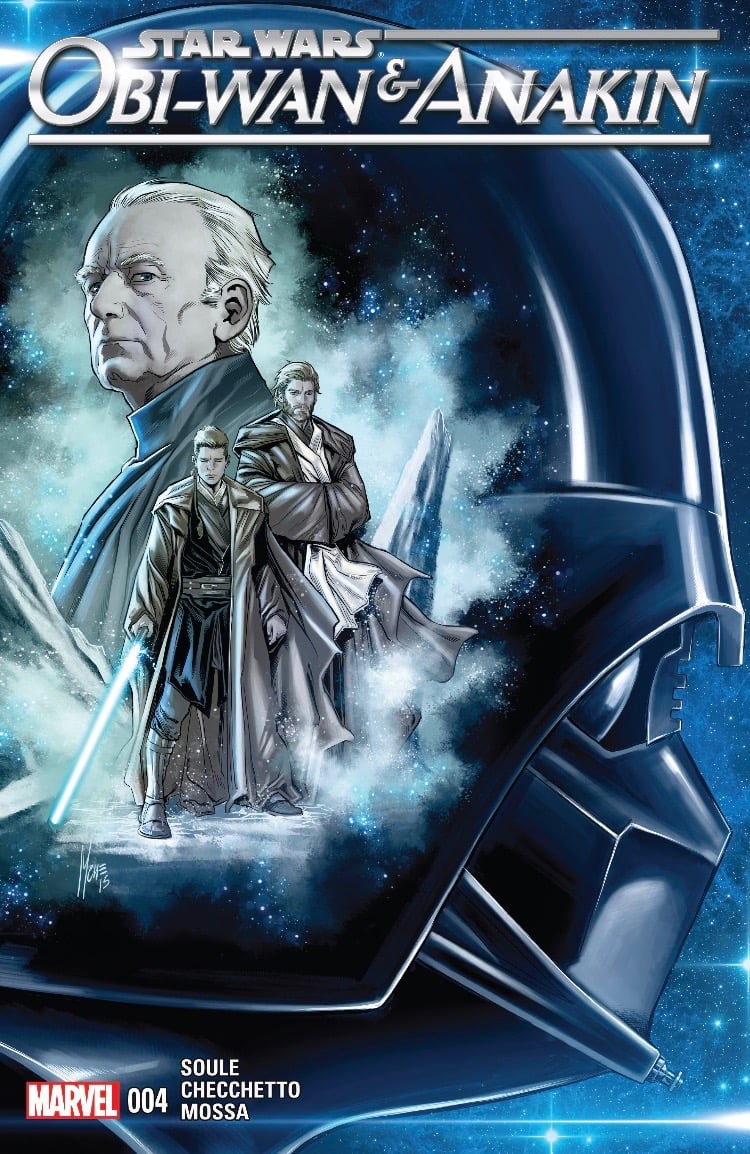 This week we head back to the Prequel Era in the fourth issue of Marvel’s Obi-Wan & Anakin.  In my opinion, this has been a very fun series so far. The formative, adolescent years of Anakin Skywalker have not yet been covered in the established canon. Each issue we get a little bit deeper into the conflicted psyche of a young man, trying to find his place in a galaxy that only seems to get bigger to him each day. I’m having a lot of fun reading this series. As much as I love it, this is by no means a perfect story; and despite this issue being a solid entry into the series, you could ride a Bantha through some of the plot holes. 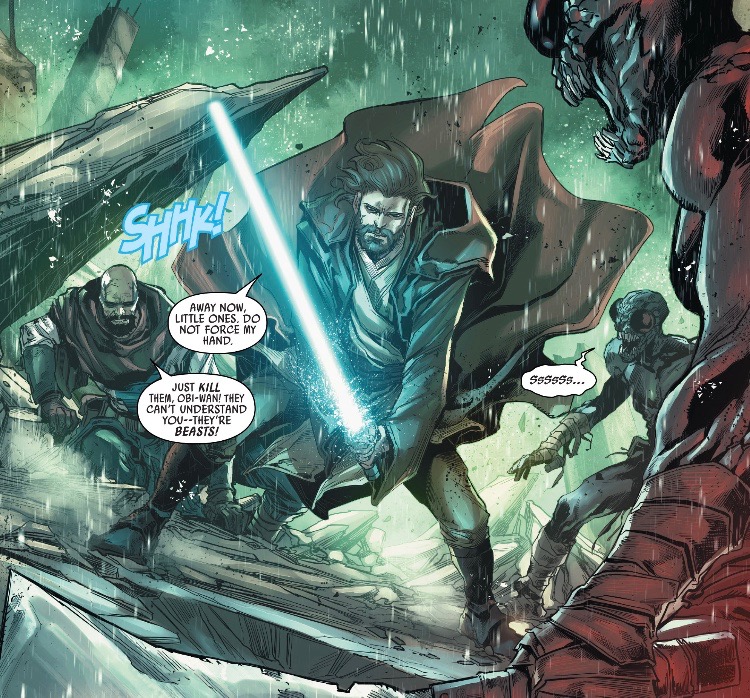 We last left Obi-Wan and Grecker in a rather perilous nose dive to the storm-ridden, toxic surface of Carnelion IV. Grecker comes from a faction of the ruined planet called the Closed. At the conclusion of issue three, two members of the other faction, Open, Mother Pran and Kolara, kidnapped Anakin and left Obi-Wan and Grecker to die. The “beasts” that are creeping up on Obi-Wan and Grecker above are  hinted to be the casualties of the toxic environment. I’m guessing they were once humanoid, but suffered something equivalent to radiation poisoning, and have been transformed into these fallout mutants. I like the bits of Carnelion IV history writer Charles Soule sprinkles in with the action. You can see above that Obi-Wan does what he can to keep the peace. 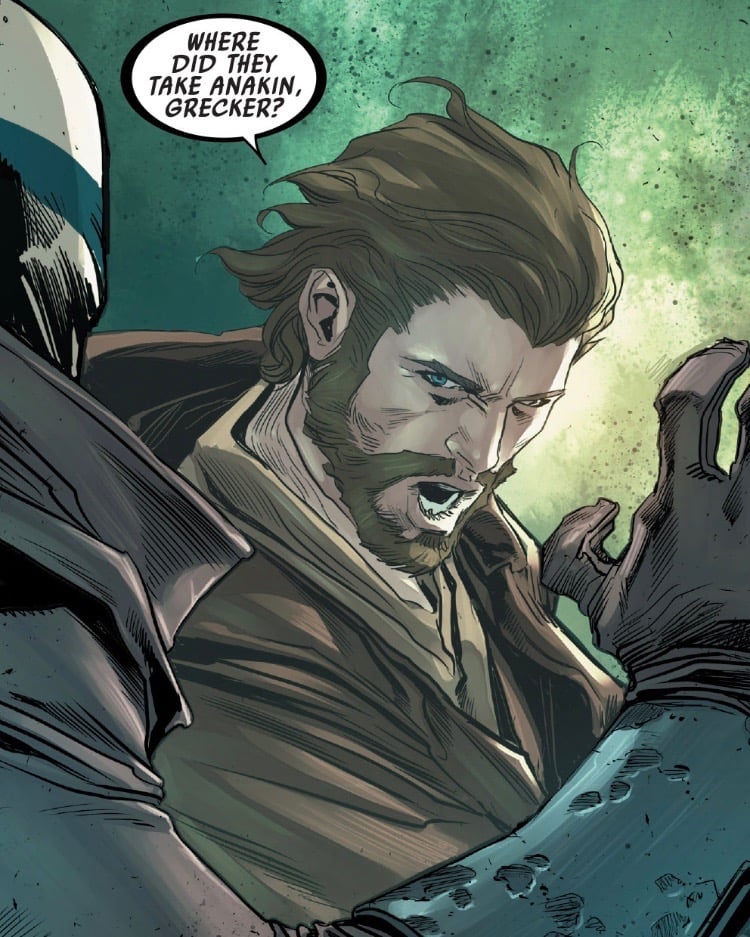 Obi-Wan has had a rough day and is done getting the run around from Grecker. About all he and Anakin have heard between Grecker and Mother Pran is how each one is out to get the other. Grecker is laying it on pretty thick about the war between the Closed and the Open and Obi-Wan has little interest in the pettiness and senselessness of it all. Two dying factions killing each other on a nearly dead planet are the least of Obi-Wan’s concerns. The Jedi Master is concerned with the fate of his Padawan and the source of the distress signal that brought the two of them to Carnelion IV in the first place. 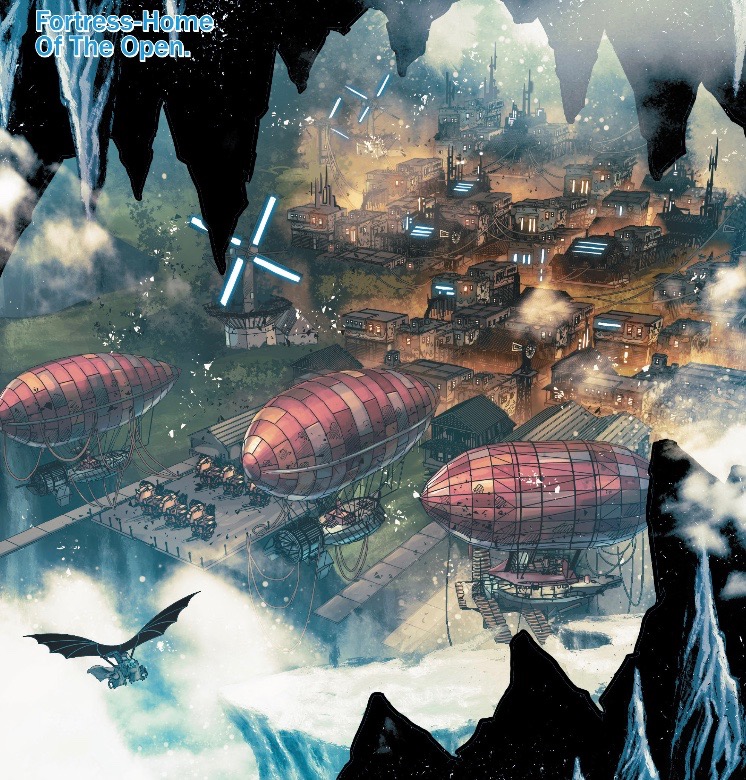 Anakin has been taken to the Open’s fortress. Grecker initially describes several of these “fortresses”, but from the arsenal in front of us, I can’t imagine they would need much more than that. The visuals provided by the duo of artist Marco Checchetto and colorist Andres Mossa continue to provide fresh, striking locales in a universe not short of any. The highlights of this issue are the dramatic reveals like this one. I hope we get a chance at seeing what the Closed’s home base looks like. 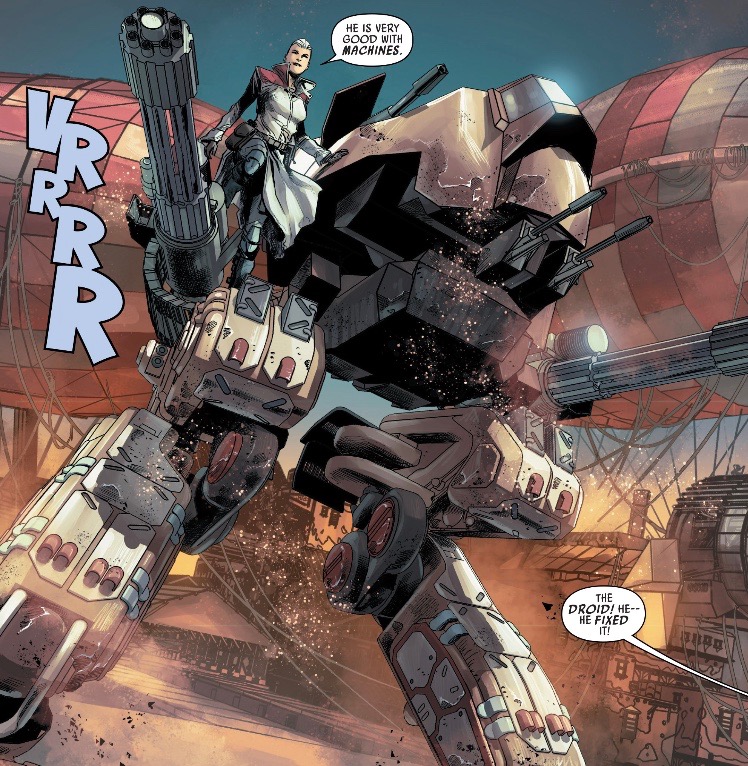 Yes, Mother Pran was interested in Anakin for more than his abilities with a lightsaber and the Force. Then again, this is Carnelion IV, and no members of the Closed or the Open even know what the Jedi are. Anakin is good at fixing things, mechanically speaking. Mother Pran captured Anakin because he can repair their badass looking battle droids. I have to say…I can’t wait to see these things in action! Do they shoot bullets?  Lasers? Both? Anyways, Anakin was able to repair the power cell and Mother Pran intends he do much more to help him, triggering another Palpatine flashback.

Palatine managed to coerce his Padawan buddy to take the chance out of a Chance-cube in the previous issue, causing a corrupt senator to lose it all at the gambling table. Back in the confines of Palpatine’s office, the Chancellor makes some shady requests of Anakin, also planting the seed that Anakin is capable of much more in the galaxy than the servitude the Jedi Order could confine him to. The color tone in these frames, thanks to Mossa, has been interesting as they started out brighter in earlier issues, got very dark once Palpatine put on his hood, and have now returned to the warmth Anakin is used to from his political friend. Again, Palpatine is so obviously a duplicitous snake-in-the-grass that I’m baffled it took the Jedi Order 13-years to figure out he was a damn Sith Lord. Anyways, we can’t change that now, just enjoy the peak into Palpatine’s courtship of the Chosen One. 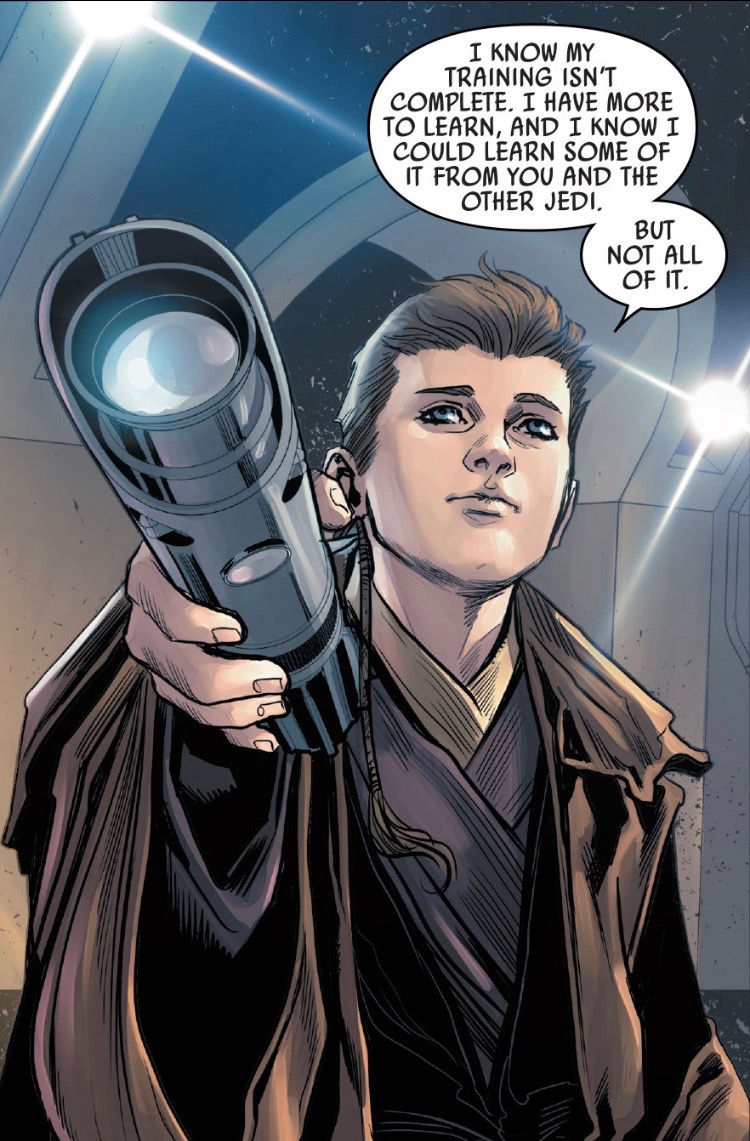 So, yeah, um….Anakin turned in his lightsaber and decided to leave the Jedi Order as a young teenager. His reasons seem valid to me, and I’m surprised how lucidly he states his intentions to Obi-Wan. Anakin’s life was decided for him when he was a child.  All he knew was a desolate planet and a life of slavery at the hands of a junkyard dealer. Now that the vastness of the galaxy is something Anakin can grasp, a life bound by codes and doctrine seems incredibly limiting to the young Padawan. Obviously this decision didn’t stick, but it will be interesting to see Anakin explore these restless emotions. When we met him in Attack of the Clones, Anakin was ready to disregard the Order in the name of love. Now he’s doing it because he feels there is much more to see than wherever the Jedi Council decide to send him to. I don’t think you will be surprised that his friend in high places also gave him a nudge out the door of the Jedi Temple. 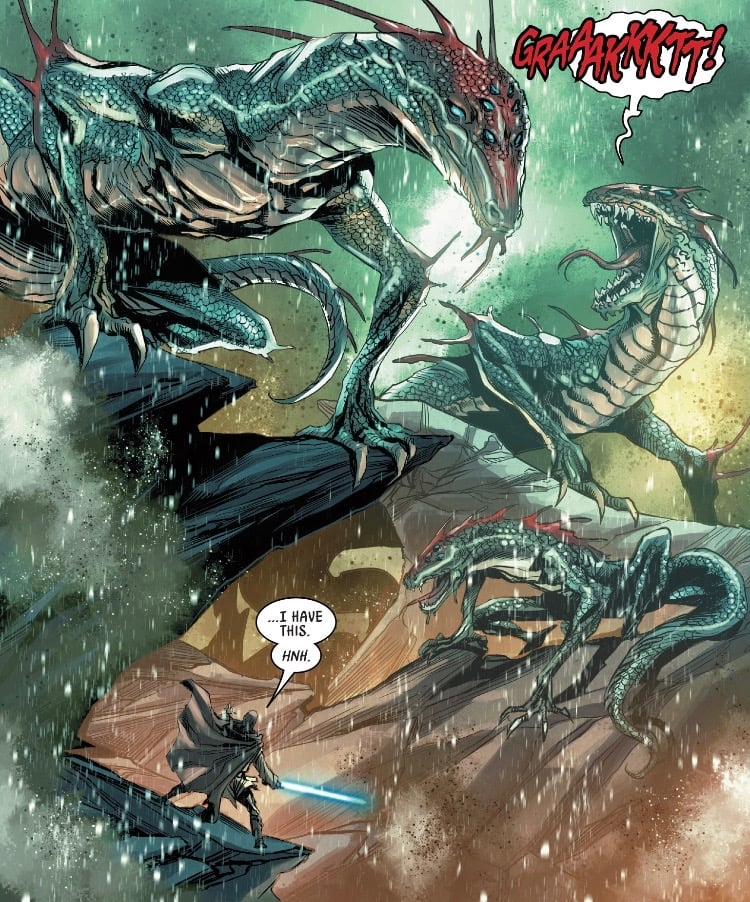 Obi-Wan is ready to deal with the…um…generic lizard, dragon looking things. They look kinda cool, huh?  Well, just as soon as they appear they are gone. I referred to plot holes in my introduction. List this as example A. Sure, they look cool and they are beautifully drawn by Checchetto and Mossa, but they literally serve as a distraction to the story. This predicament gives Grecker an opportunity to catch the Jedi Knight off-guard. 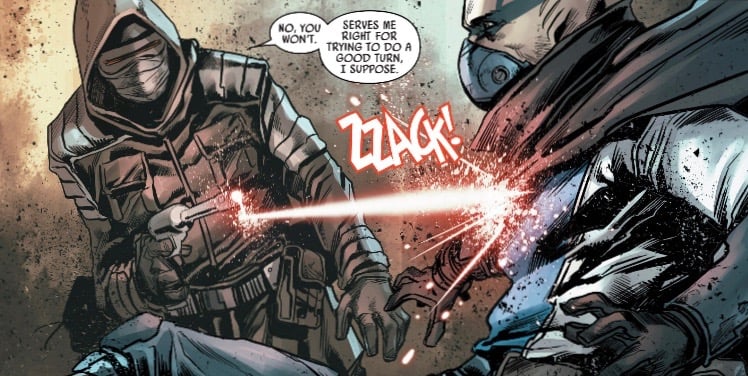 Just as Grecker goes to shoot Obi-Wan in the back, a masked figure appears to stop the assault. Let me take a time out here and talk about something that keeps bothering me. Maybe it’s nitpicking, but Obi-Wan and Anakin seem awfully clueless when it comes to sensing danger through the Force. I know Jedi aren’t perfect and they can get sloppy, but these Jedi are the best of the best, and the seemingly dim soldiers of these two factions have no trouble taking them out. Obi-Wan would have met his end if it had not been for this masked person. If you remember the previous issue, Anakin was knocked unconscious with a wrench. Okay, I’ll stop and just try to talk about the story, but I thought I should mention that, because I don’t think I would be alone in my statement. 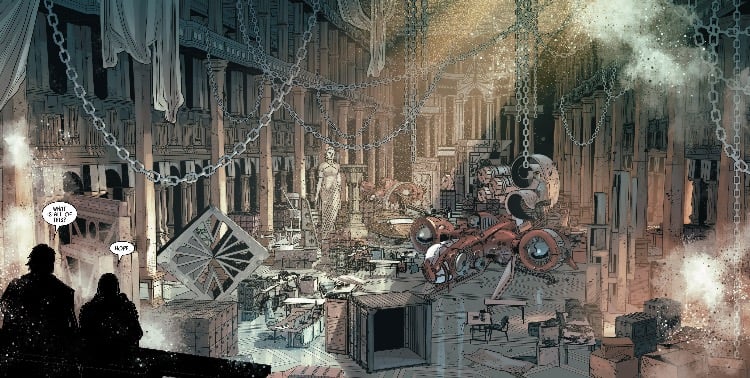 The masked figure is a person named Sera.  Sera’s kept remnants of the lost culture of Carnelion IV. He sent the signal because of his memories of the Jedi being negotiators and warriors. Sera intends to try and pass on his memories to a newer generation, but his good intentions are in sharp contrast to his views of the Open and Closed. 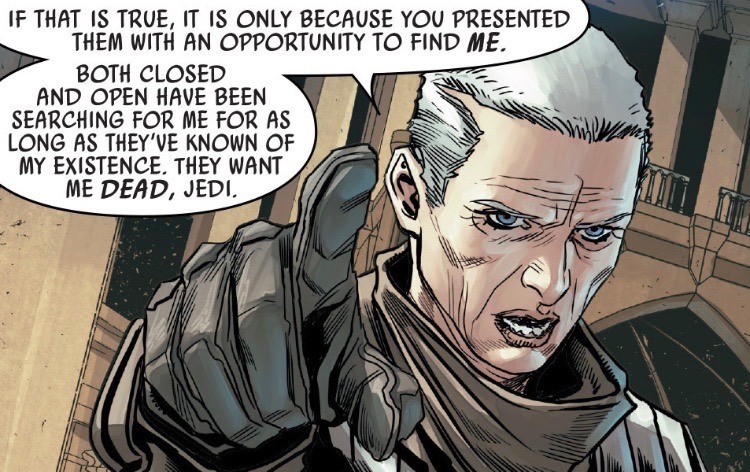 This series has been filled with very unreliable explanations. I’m not sure what to think about Sera. If a person wants to unite the surviving people of his home world, the glass half-empty approach is not going to work out very well. Sera believes that the two factions share one common goal: Destroy Sera. I don’t know if I buy it quite yet. This development is essentially left at that, and we’ll have to wait until the next issue to find out more about the mysterious Sera.

Anakin, yes, potentially the most powerful Jedi the galaxy has ever seen, is bound and gagged. Part of me wonders if Anakin is biding his time to learn more about the Open, but most of me thinks this is another gaping plot hole. Yes, Anakin is young, but I still think he could take on the dim soldiers that make up the Open. It makes no sense that he just sits there. Mother Pran has plans for the Padawan, and they don’t involve him leaving the Open’s custody for a very long time. By the end of this issue, the Open and their weapons of war are on the move. The question of where they are headed is one I will let you, dear reader, decide.

Overall, I was very pleased with this issue. I keep forgetting that this issue is still going on, so it’s always a pleasant surprise when I check my calendar for what Star Wars comic is up for review any given week and this one pops up. Take a walk down to your local shop and pick this one up. The series keeps a nice cadence and there are just enough twists to keep it interesting. Marco Checchetto’s Mad Max-vision of Carnelion IV is definitely the selling point and well worth the price of admission. The artwork, coupled with a decent story, make this a great fix for a Star Wars fan. 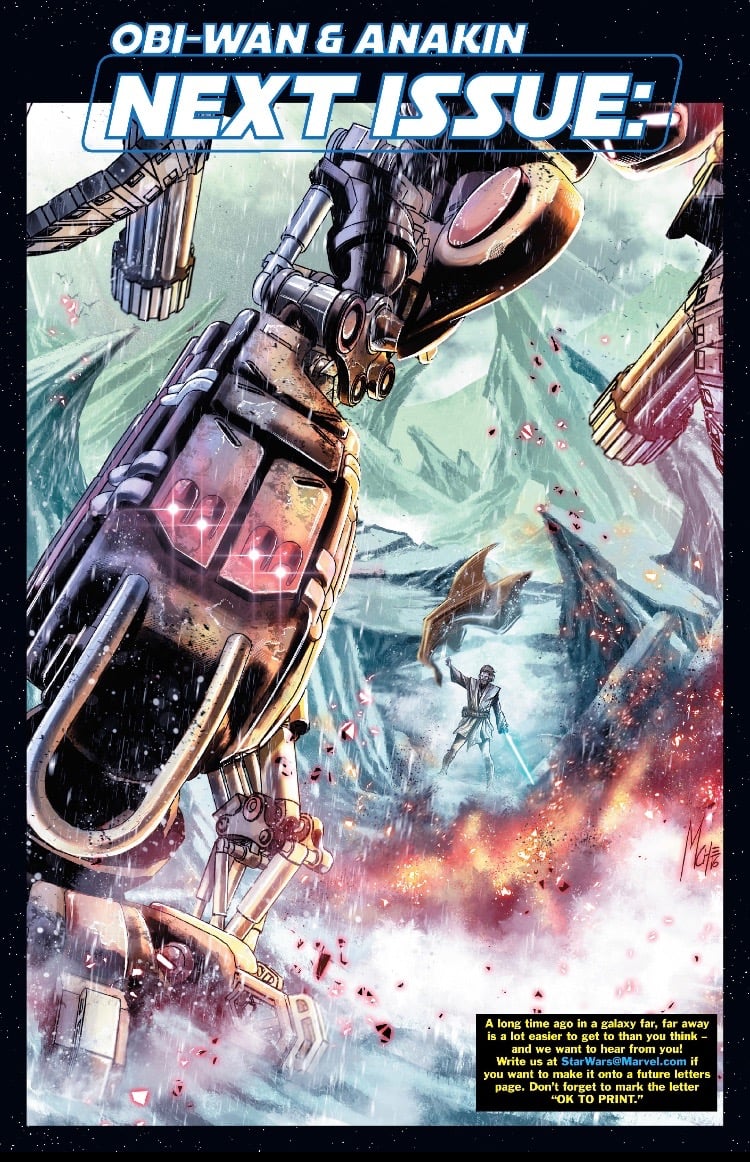 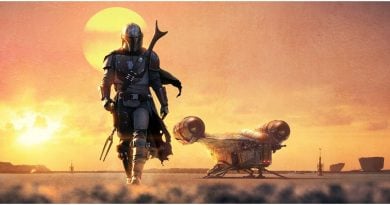 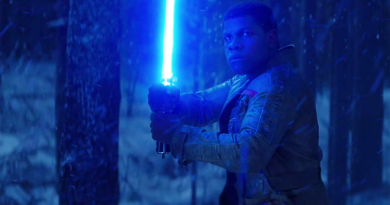 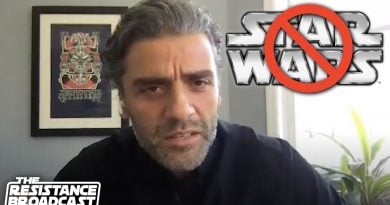