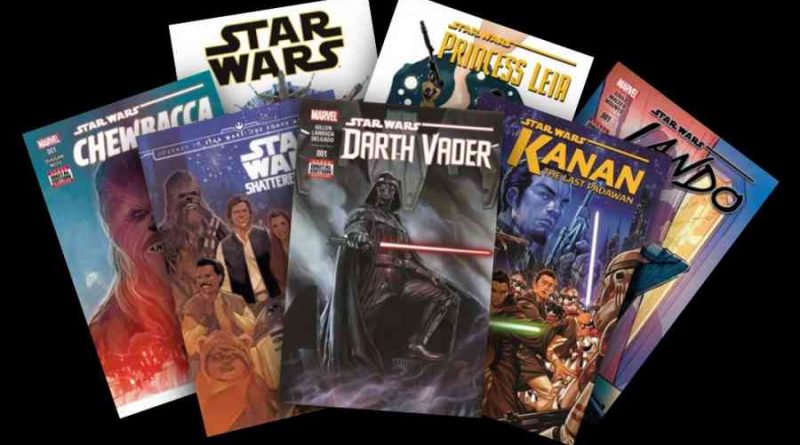 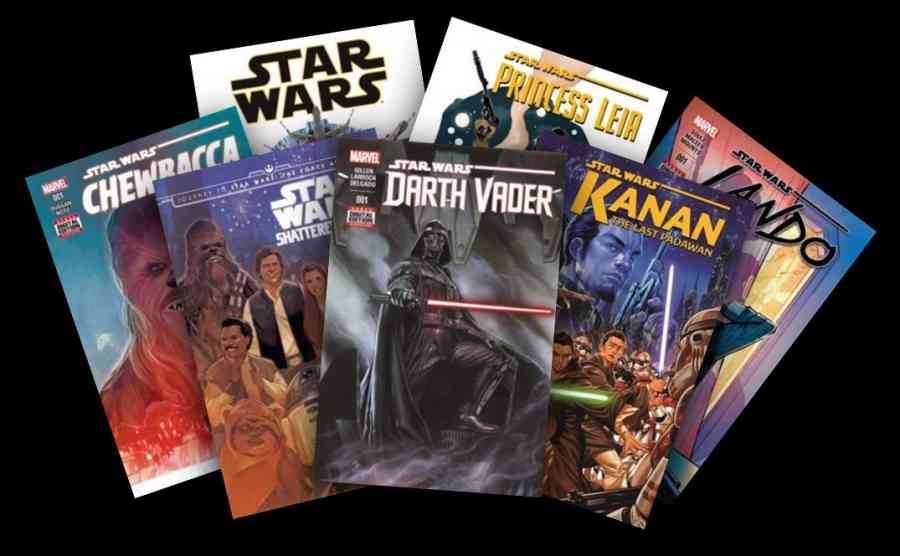 Hard Case continues this week’s series by your three favorite Star Wars comic reviewers, The Best of the New Star Wars Comics, So Far (link to previous review HERE).  If you missed Lady Mushashi’s pick, be sure to take a look, as we are going to keep going throughout the week.

The year 2015 will forever be remembered by Star Wars fans as the year that Star Wars made its most dramatic and triumphant return to pop culture in the history of the franchise. And it did so in the biggest way possible by appealing to fans new and old, reigniting the world’s passion for the saga, giving us new stories, yet remaining true to form. Granted, the biggest moment in 2015 occurred in December with the release of a little movie called The Force Awakens. But for the eager Star Wars fan just chomping at the bit to get their hands on some new Star Wars material, 2015 gave us so much more than just a new addition to the film saga.​

Along with Star Wars: Rebels and the multiple novels that were released throughout the year, fans were also treated to 50+ Star Wars comic issues across seven different titles. One of the coolest aspects of the comics is how the writers are able to fill in the gaps between the films, and in some cases, make you view the films in a whole new light. All of the new comic books from 2015 on are also considered official Star Wars canon, which gives these stories an added weight of significance that has never existed before in the expanded universe of Star Wars.

Having recently come out of a lengthy contract with Dark Horse Comics, Disney/Lucasfilm entered into a new contract with Marvel Comics, another Disney subsidiary, and the original publisher of Star Wars comics back in the ‘70’s and ‘80’s. Although there are undoubtedly some misses in last year’s massive comic book lineup, I would argue that Marvel got a lot more right than it got wrong. The one story arc in particular that really resonated with me was the first arc of the Darth Vader series, simply titled “Vader”. I loved this storyline, and the standout issue and conclusion of this story arc also happens to be my top pick of 2015: Darth Vader #6.​ 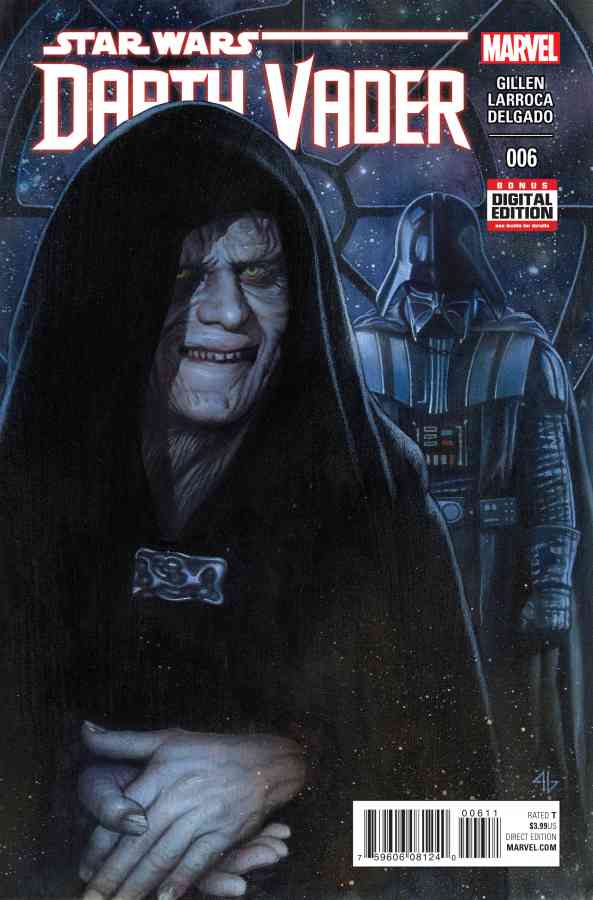 ​
Following his defeat at the Death Star, Vader found himself having to earn back his master’s favor, as the Emperor’s displeasure with his apprentice became clear from the beginning of issue #1 of the series. Vader then began to pursue his own agenda, enlisting the assistance of an archaeologist named Dr. Aphra to help him acquire a droid army of his own and hiring the notorious bounty hunter Boba Fett to track down the Force-strong rebel pilot that destroyed the Death Star. 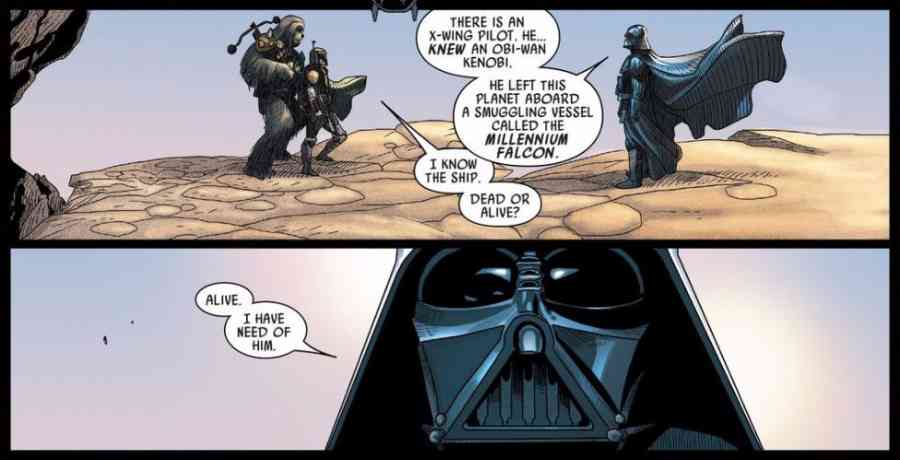 In issue #5, after having found out that Palpatine has been investing in alternatives to replace him, Vader and his droid army stormed the secluded stronghold of a technology specialist named Cylo, who has been using advanced cybernetics to augment the abilities of a group of various alien beings and humans in an effort to make Force powers an obsolete thing of the past. 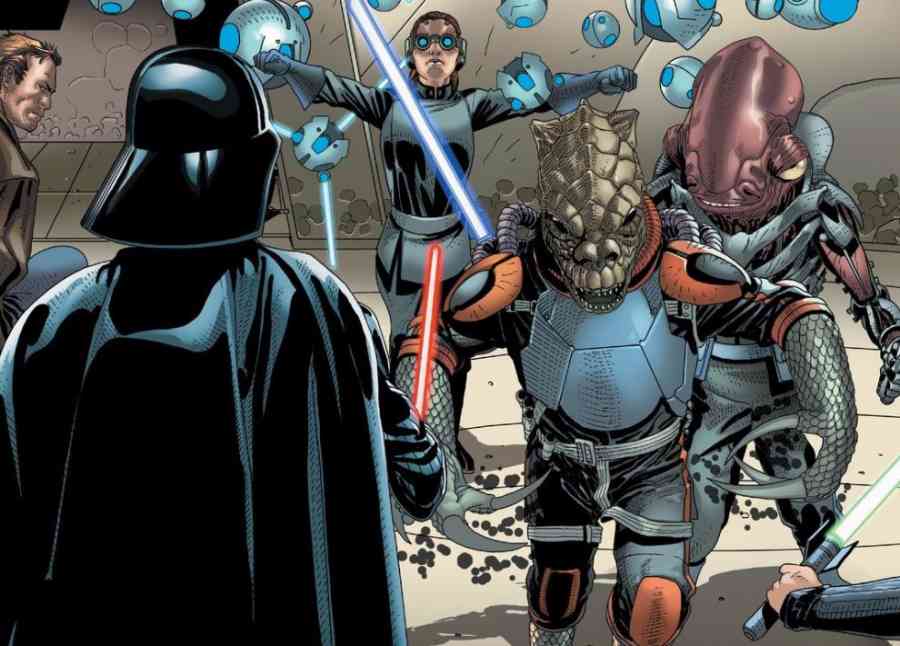 After discovering in the previous issue that the Emperor himself is on board the ship and that he intends to use the situation as both a demonstration of Cylo’s creations and as a test for Vader, now in issue #6, Vader accepts the challenge as he attempts to show these abominations that they are nothing compared to the power of the Force.

After a brief skirmish, the Emperor puts a stop to the contest and agrees to utilize Cylo’s cyborgs while also letting Vader back in his good graces, as he is impressed by Vader’s ability to act behind his back to achieve his own personal victory. Nonetheless, Vader’s faith in his master is shaken as he realizes that the Emperor had always had a contingency plan in place to replace him. 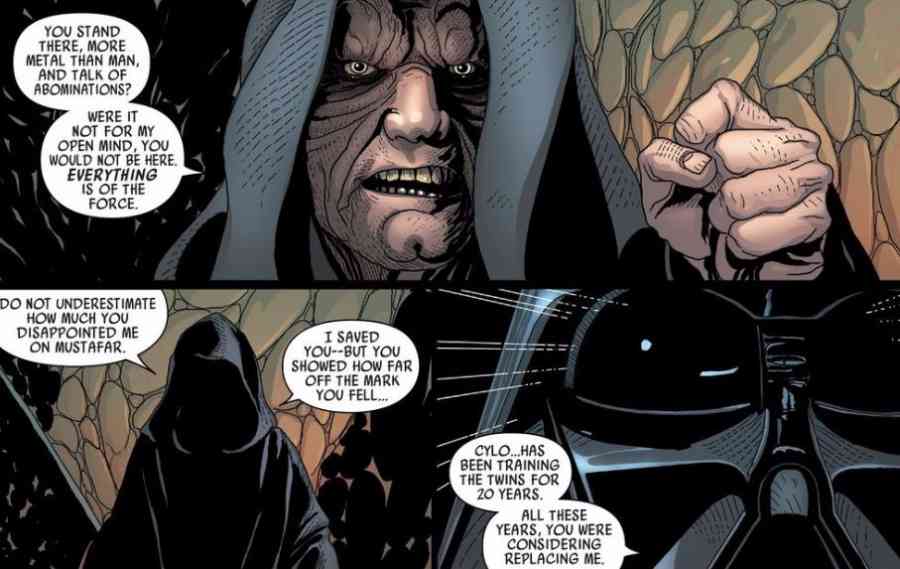 Palpatine’s response to Vader’s concern is blunt and to the point. He rubs salt in the wound as he mentions just how much Vader disappointed him on Mustafar all those years ago and that only the strongest are worthy of the Sith mantle. If Vader had been defeated, he is unworthy, but as it stands in light of his accomplishments, the Emperor decides to give him the chance to once again proven himself worthy. 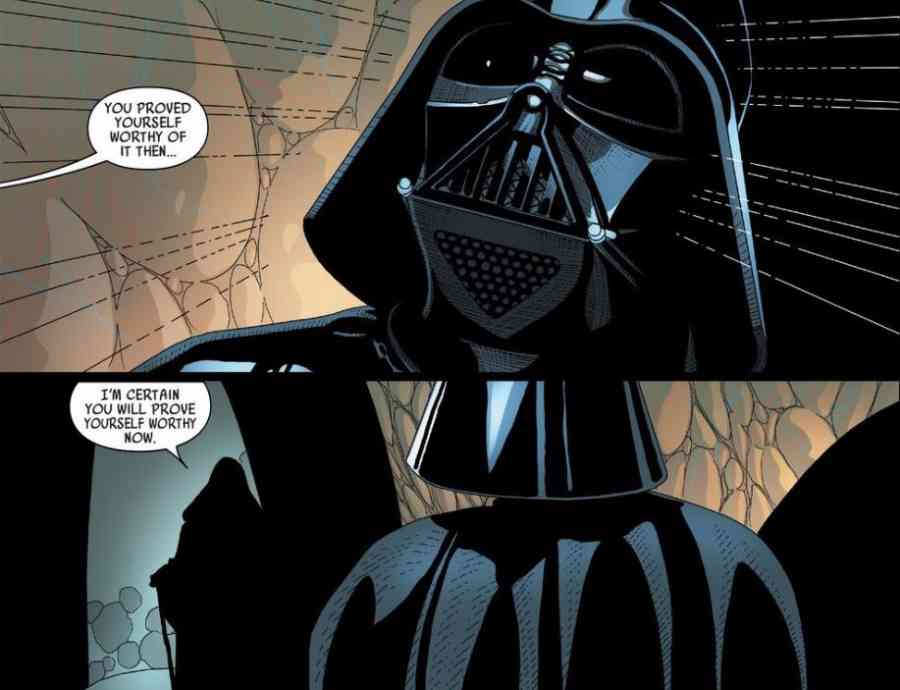 My favorite part of this whole issue though, has to be its conclusion. Shortly upon his arrival aboard his Star Destroyer after his discussion with the Emperor, Vader gets a surprise visit from the bounty hunter in his employ. Although Boba Fett was unable to apprehend the rebel pilot, he was able to provide Vader with a name – Skywalker. The last few panels of this comic gave me chills.

Vader’s recollection of the moment in Revenge of the Sith where Padme breaks the news of her pregancy and that moment where the Emperor tells him that Vader killed her in his anger coupled with Vader clenching his fists in burning rage as he shatters the first layer of transparisteel was amazingly done. 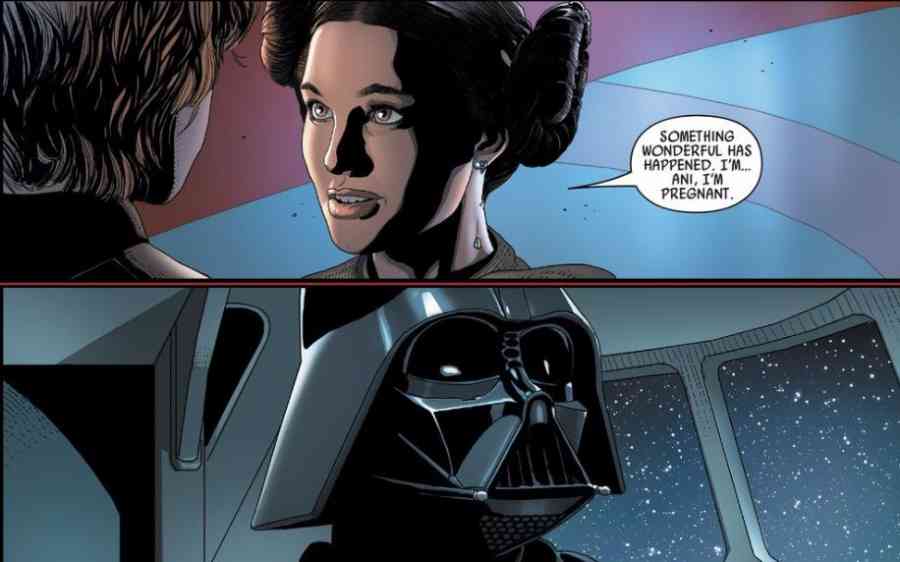 Through his own insight, Vader instantly realizes that he has a son, and that the Emperor has been lying to him this whole time. His undying loyalty to his master has now been severed. His own personal agenda to overthrow the Emperor and his obsession with finding his son to help him do so is set in motion in this one pivotal moment. And it’s a beautiful thing. 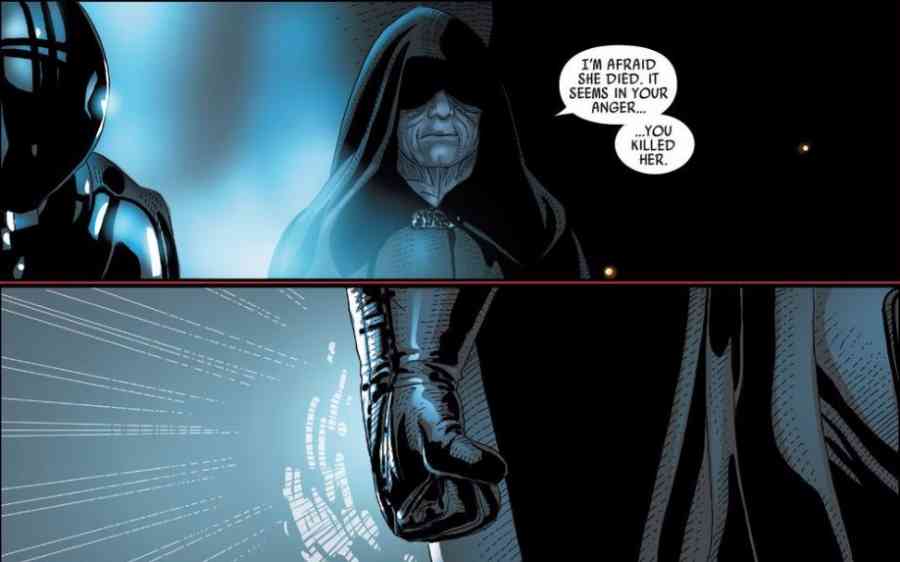 This scene also fundamentally changed my understanding of the interaction between Vader and the Emperor in The Empire Strikes Back, as I realized that Vader knew about his son before the Emperor revealed it to him. He was just feigning ignorance when he asked of him “How is this possible?” and that he had intentionally been keeping this information from the Emperor. 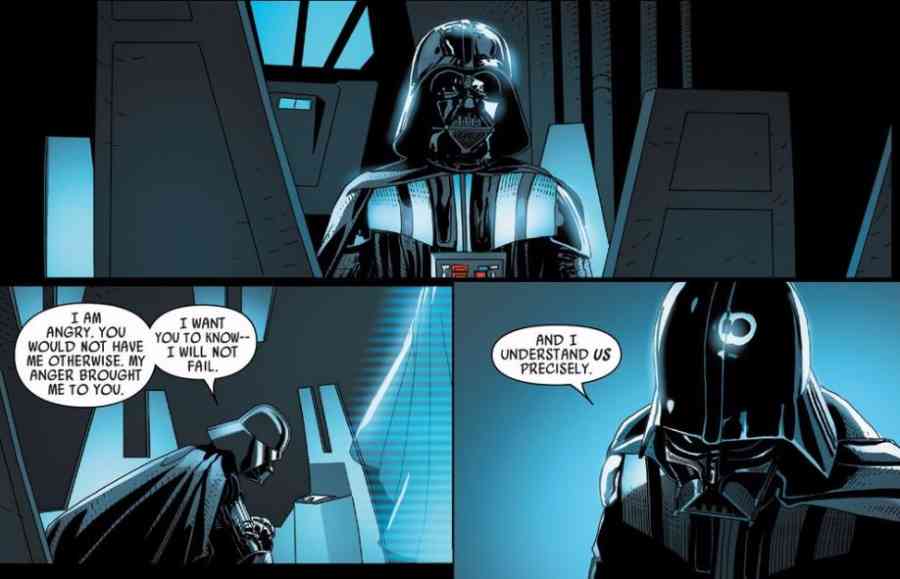 I felt that this moment also added weight to his conversation with Luke on Bespin where he calls to his son to join him and overthrow the Emperor. Up to this point in the movie, Vader seemed to be the Emperor’s lapdog and now all of a sudden, he is plotting a coup against him. This comes as somewhat of a revelation in the film, but it’s neat to see how the comic highlights that this is actually something Vader had been plotting all along. 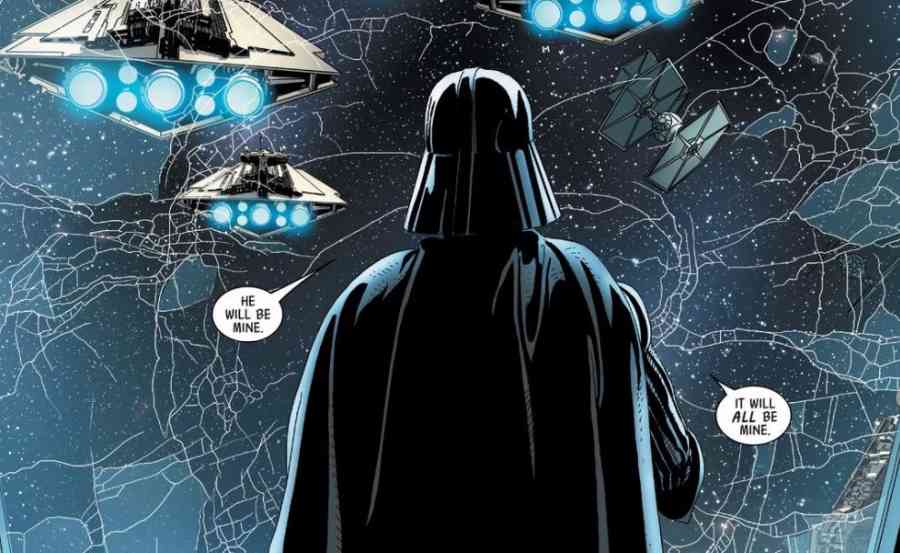 There were so many great comics this past year and the list of my runners-up would be too hard to narrow down to single issues. Kanan: The Last Padawan is probably my favorite series to date with Shattered Empire and Lando falling in closely behind. Without a doubt though, my favorite single issue is Darth Vader #6. The series hit some bumps along the way following the great conclusion to this first arc, but it seems to be getting back on track. I look forward to what 2016 will bring and I can’t wait to see where we go from here! 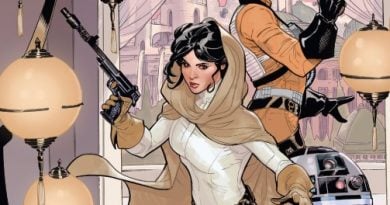 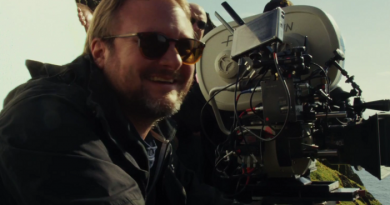 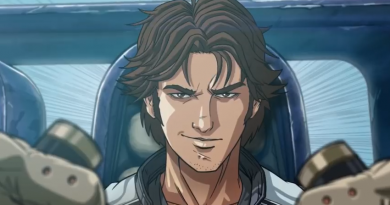 31 thoughts on “The Best of the New Star Wars Comics, So Far, PART TWO”