UPDATE 2! The Force Awakens Trailer to be Released Online This Friday!

The official StarWars site announced that The Force Awakens trailer will be available online this Friday!

The Force is with you on #BlackFriday when #TheForceAwakens teaser hits @iTunesTrailers. — Star Wars (@starwars) November 26, 2014

We are excited to announce that the first teaser for Star Wars: #TheForceAwakens will be available online this Friday pic.twitter.com/6GZfLJPrG8

Great news! No bootlegs and no crowds in the theaters. 🙂

There is going to be only one trailer.

Clarification for the people who don’t know where to look for the trailer. You don’t have to pay anything. The trailer will be posted on the following link on Friday. You just need to have a QuickTime player, which is free.

There’s already an announcement banner there. 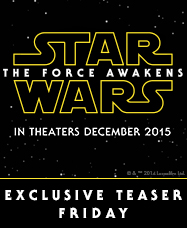