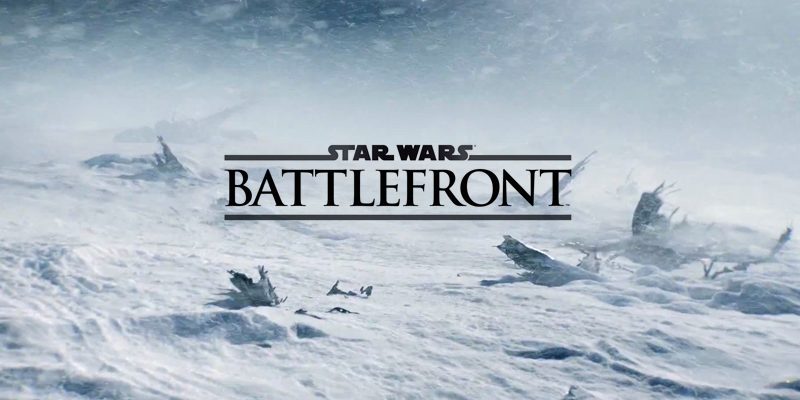 Imagine landing in a Star Destroyer, blowing it up from the inside and taking an escape pod to the ground as the star destroyer crashes onto the planet. With release of Gameplay or a trailer from DICE’s Star Wars Battlefront at the EA’s E3 press conference (3pm EST, 12pm PST) approaching today, we might very well see this today! I’ve gathered some of the history of one of the most popular Star Wars games in history…

This latest instalment of Battlefront has had some very bad luck as it has already been cancelled twice on home consoles and was released as Star Wars Battlefront II in 2005 almost 10 years ago.
The trouble first began when Star Wars: Battlefront 3 was in development at Free Radical Design, but it was cancelled by LucasArts executives who found the project too costly, according to the developer’s co-founder, David Doak. The Game was in a playable state when it was cancelled so we have videos of what that game was.

Although we will never get to play this game, LucasArts took the ideas, story mode, and maps from this game and gave it to the developer Rebellion who ported it and made Star Wars Battlefront : Elite Squadron which was released on the PSP in 2009. I recognize all of the maps and the story mode cut scenes from the YouTube video as the same models, story and maps as Elite Squadron’s.

Luckily DICE has stated they have access to all the data from the Lucasfilm era. So they most likely have a copy of Free Radicals
Battlefront III, and will base some of the ideas for the new game, off of what the game was going to be if it had not been cancelled. Hopefully they will include the Space to Ground feature as that is one of the most exciting things about the Battlefront III videos.

Fast forward to a little bit before Disney bought Star Wars. It had been almost 7 years since Battlefront II and the fanbase was really voicing their desire for a new Battlefront. It was one of the most requested Star Wars game sequels. So Lucasarts started development on a first person shooter game called Star Wars: First Assault.

if First Assault performed well, it would have validated the development of Star Wars: Battlefront 3. LucasArts would have then created the game from scratch, ditching previous work by Free Radical.

Lucasarts started development on First Assault but then secretly started a project named “Version Two” which was discovered to be Battlefront III made based off of the early version of Star Wars : First Assault.

When Disney bought Lucasfilm they cancelled all projects and sold the rights to EA, and EA assigned 3 studious they own to make 3 star wars games. DICE picked up the Battlefront IP, while Visceral and BioWare started working on two other unannounced Star Wars games.
With DICE’s Frostbite engine having fully destructible environments the possibilities are endless for how the map can evolve as combat rages around the planet and the skies.

This Teaser for DICE’s Battlefront was released almost exactly a year ago at last years E3 press conference.

24 thoughts on “The History of Star Wars Battlefront.”