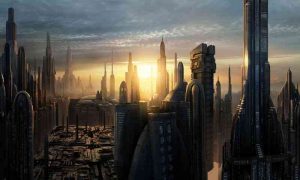 Looks like ABC is trying to find a way to get Star Wars on television. Last we’ve heard about the live action TV show it was too expensive to execute although longtime Lucasfilm producer Rick McCallum shared that they have an enormous amount of material for the show. Here’s what ABC entertainment president Paul Lee had to say about the project:

“We’d love to do something with Lucasfilm, we’re not sure what yet. We haven’t even sat down with them. We’re going to look at [the live-action series], we’re going to look at all of them, and see what’s right. We weren’t able to discuss this with them until [the acquisition] closed and it just closed. It’s definitely going to be part of the conversation.”

Even many working in Hollywood don’t realize a live-action Star Wars TV series has been sitting on the shelf the past few years. The project was commissioned by longtime Lucasfilm producer Rick McCallum, who enlisted writers such as Battlestar Galactica‘s Ron Moore and swore them to NDA secrecy on the plot details (more on the show’s storyline below). Fifty scripts were written. McCallum once called the scripts the most “provocative, bold and daring material that we’ve ever done.”

The scripts gathered dust, the scope of the production and the extent of the show’s necessary visual effects deemed too expensive for a broadcast or cable network. The Star Wars show was budgeted at more than $5 million per episode and Lucasfilm wanted to retain ownership.

But now Disney has purchased Lucasfilm for $4 billion and Disney owns more than a couple TV networks. The financials for a big-budget TV show are more compelling if the license fee and other income sources stay in the family.

Could the live-action show finally see the light of day? It’s a tricky question because a new Star Wars film is planned for 2015. Cautious brand managers are sometimes reluctant to have a live-action TV show on the air when producing live-action films — such as Warner Bros. putting the kibosh on any Batman TV projects while making Christopher Nolan’s trilogy.

Sources say the live-action series centers on the story of rival families struggling over the control of the seedy underside of the Star Wars universe and the people who live within the subterranean level and air shafts of the metropolis planet Coruscant (the Empire’s urban-sprawl-covered home planet). A bounty hunter may be the main character. Set between the original Star Wars film trilogy and the prequels, the time period allows for all sorts of potential appearances from classic figures from the Star Wars universe.

Extensive art work including character designs, costume designs, and set designs were all developed by a top team of concept artists and designers who worked for more than a year on the third floor design studio at George Lucas’s Skywalker Ranch’s main house on the project. The team was closely supervised by McCallum and Lucas.