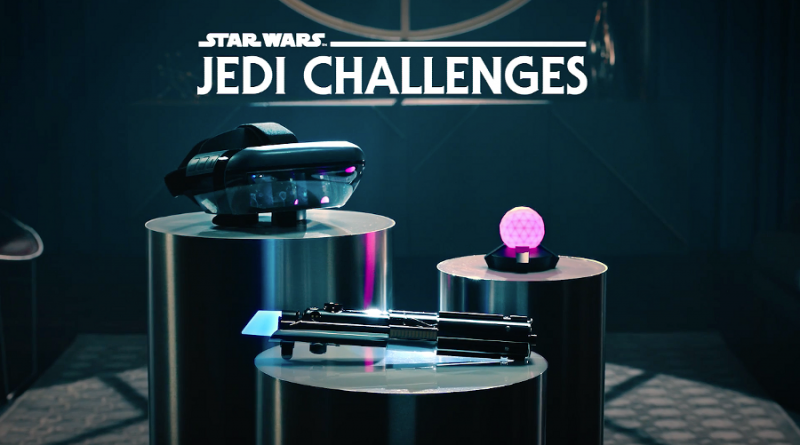 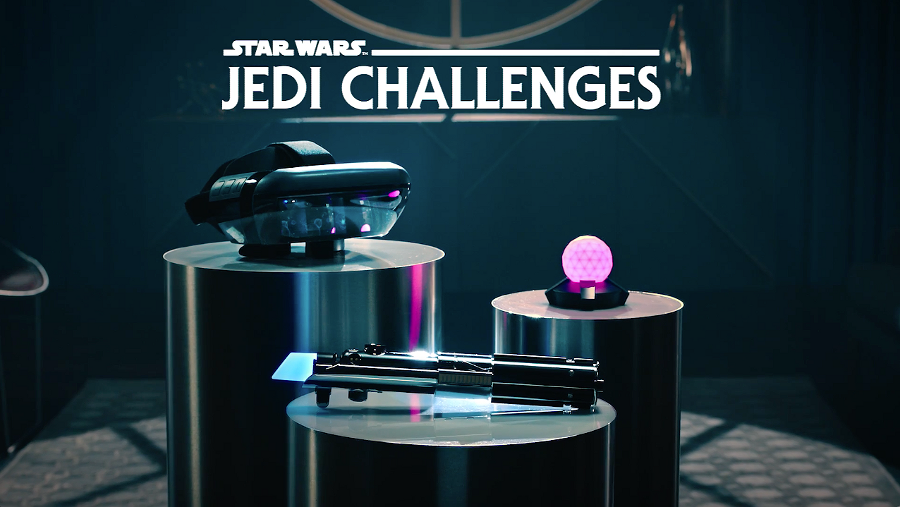 If someone told me 30 years ago when we were kids playing with wooden sticks imitating our favorite characters from a new movie called Star Wars (the premiere in Eastern Europe got delayed for a couple of years), that in the future I would be able to wield a lightsaber, deflect blaster projectiles and duel Darth Vader himself, I would have laughed really hard in their face. Now, thanks to Lenovo and their latest Augmented Reality (AR) Star Wars set named Jedi Challenges, we can get as close as it gets to the experience of being a real Jedi knight. Get ready to command armies and even play a little Holochess – all from your own living room.

First of all, special thanks to Lenovo for sending us this set. This Star Wars AR set is really a unique experience that every Star Wars fan should try. The technology is still not perfect (there is a little room for improvements), but let me tell you that this doesn’t in any way negate the experience. 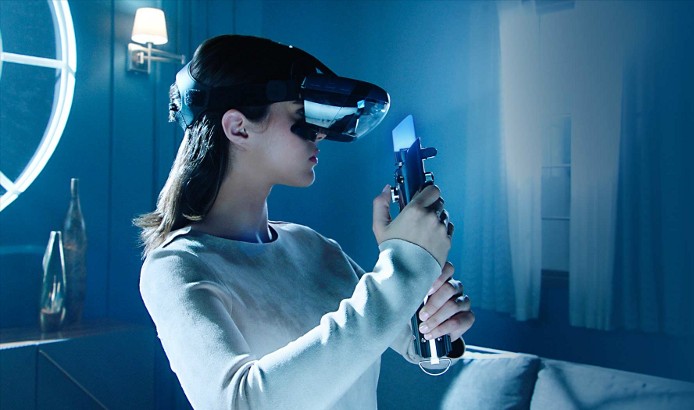 Before I get into the specifics, allow me to clarify what Augmented Reality really is and what’s the difference between AR and VR (Virtual Reality), since many people are confused by these two.

With that out of the way, now let’s talk about what you get with Lenovo’s Jedi Challenges set. 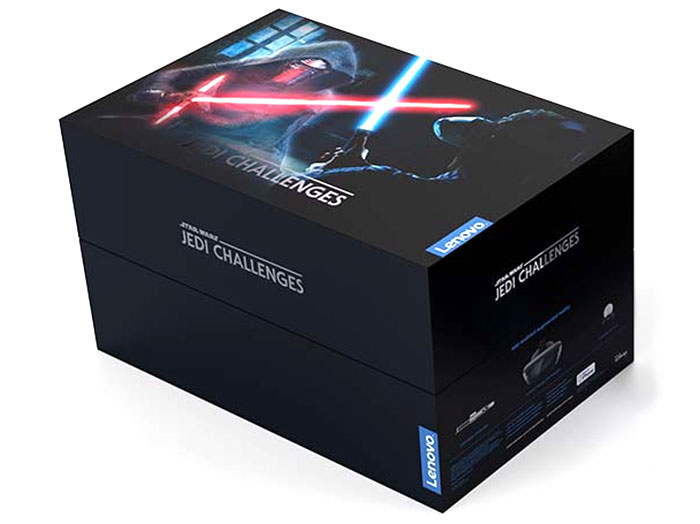 The first thing you’ll notice is that first impressions are important to Lenovo. The box the set comes in is absolutely beautiful. Lenovo is a huge company famous for its laptops and smartphones, and their attention to design has always been their strongest quality. The whole set is beautifully designed, and when you open the box, the first thing you see is a fantastic replica of Anakin Skywalker’s lightsaber on top. The detail and quality of the lightsaber is perfect. It is made of plastic but believe me, you would never guess that even by closely examining it. There is a reason why you don’t get a metal replica and that’s because of the weight. While the hilt is made of plastic it has a very good weight which is perfect for the duels so that your hands won’t get fatigued. Again the quality is so good that you can easily use this with your Jedi cosplay costume. 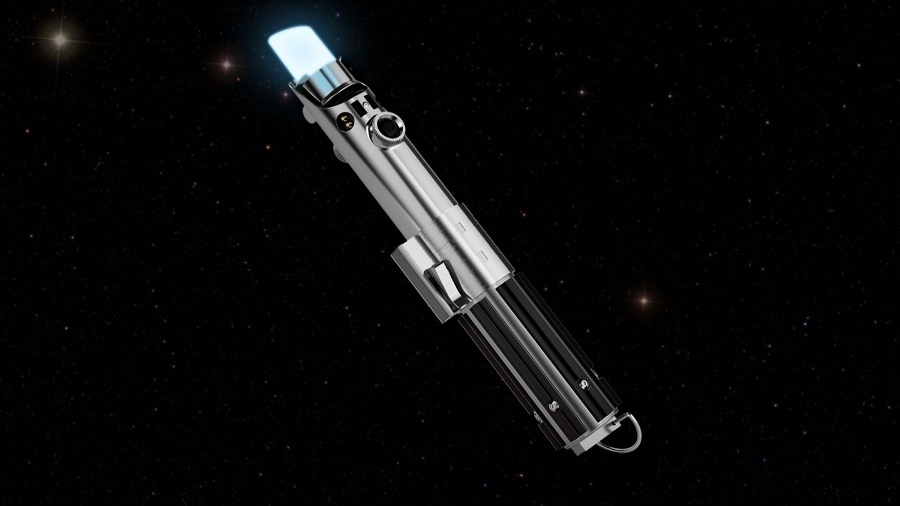 The lightsaber is powered by a rechargeable 550 mAh battery and provides two different sets of data. The first set is positional data that is generated by tracking the light from the tip of the lightsaber. The second set is the rotational data from a gyroscope and accelerometer. This data helps determine the orientation of the lightsaber and is sent via Bluetooth to the app.

You also get the Lenovo AR Mirage Headset. There are three core pieces of hardware to this product. First off, the Lenovo AR Mirage Headset has a built-in 2200 mAh battery. It weighs just 1.05lbs (477 grams) and has three adjustable straps that make the device comfortable for a wide range of users. The two fisheye camera sensors on the front of the Lenovo Mirage AR Headset keep track of the light sources from the beacon and the lightsaber. This positional data is processed onboard the
headset and then sent to the smartphone app. 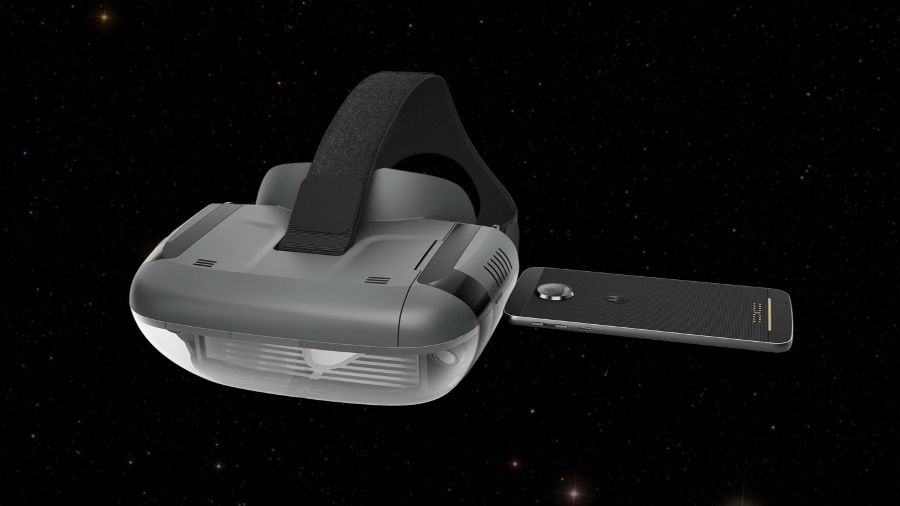 The Lenovo Mirage AR Headset also houses the smartphone in a tray on the upper-left panel of the headset. The tray is adjustable and several adapter cables are included (micro-USB, USB-C, & Lightning) to connect a variety of smartphones to the headset. A growing list of compatible devices can be found at jedichallenges.com. 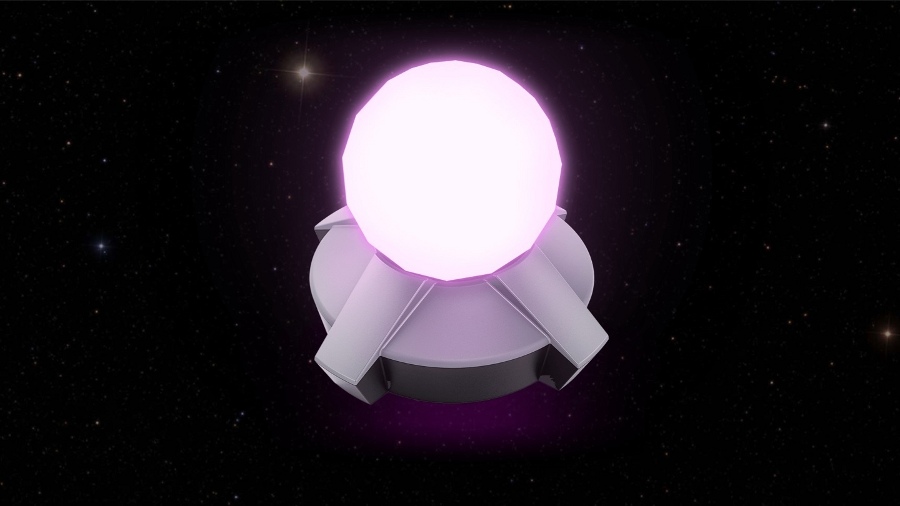 The third item from the set is the tracking beacon. It is powered by two AA sized batteries. The light emitted from the beacon is tracked by the sensors on the Lenovo Mirage AR Headset, which uses this data as a zero reference point to place augmented objects.

Now, a few words about the games you get… There are three types of game experiences included: Lightsaber Battles, Strategic Combat, and Holochess with multiple levels, increasing levels of difficulty, and sophistication.

Your journey starts with the discovery of a Jedi artifact, the Holocron. The Holocron can sense the Force is strong with the player, and opens the path of the Jedi. Ways of the Jedi will be taught to you by a new character: the Archivist. 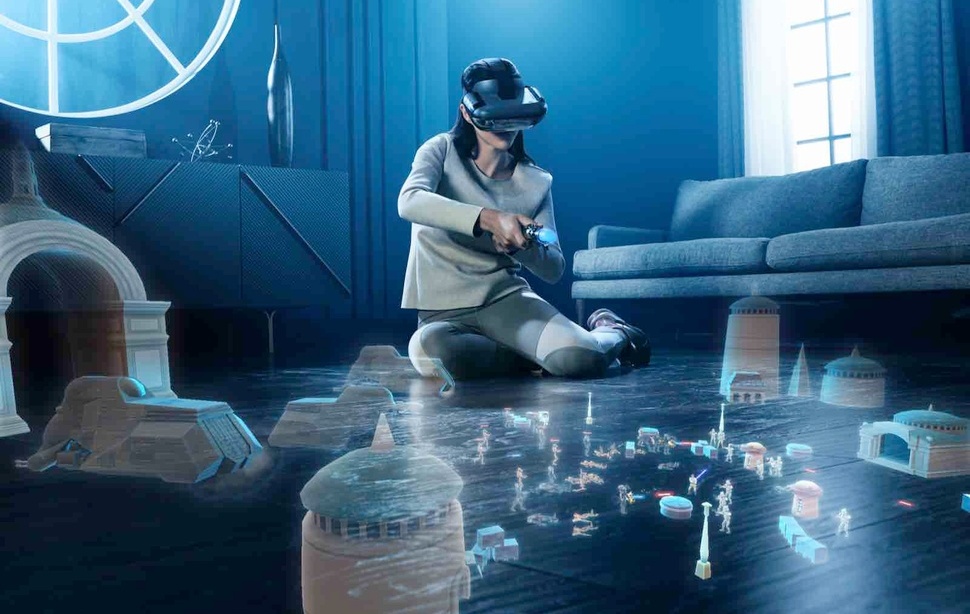 Users progress through the game by attempting different challenges throughout the planets of the Galaxy. As you open the game, you will be greeted by the Archivist who will lead you through tutorial exercises to begin your Star Wars: Jedi Challenges experience. The Holocron contains holograms of 6 planets (Naboo, Garel, Lothal, Hoth, Takodana and The Core) each of them with its own set of challenges, difficulty levels and Dark Side guardians to defeat. The Archivist will take you through historical events of the Star Wars expanded storyline, including unique events revealed in Star Wars: Jedi Challenges. While progressing through the Galaxy you will achieve multiple Jedi mastery levels: from Padawan to Knight and eventually, Master. 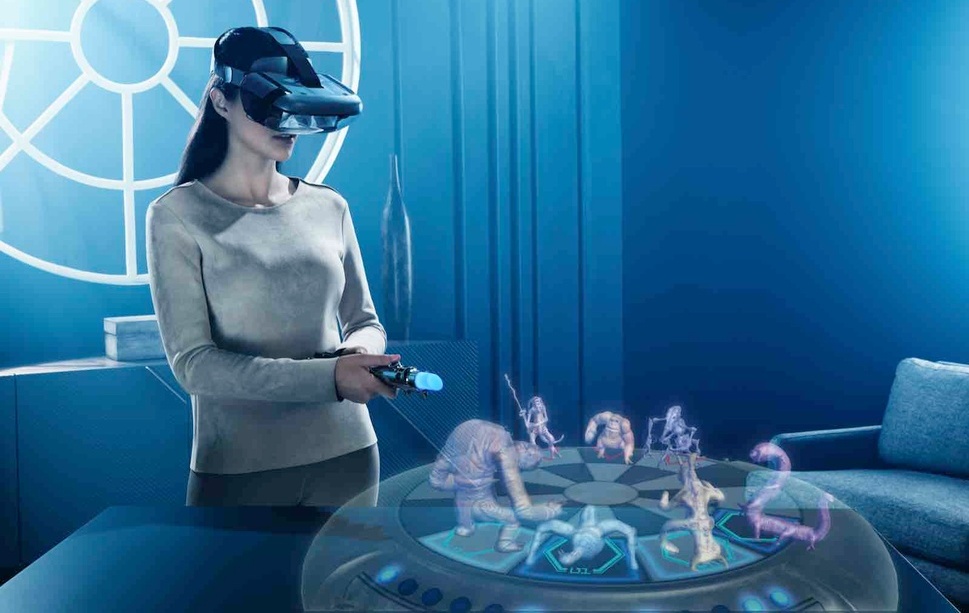 The game lets you unlock the important ranks of the Jedi Order and earn medals for achieving progression goals. Lightsaber duels offer the opportunity to earn power-ups that you can use during battle. Your Lightsaber will eventually change color as you rank upwards. Completing Holochess games give you the opportunity to earn new creatures. And as you progress through Strategic Combat missions, you will unlock more abilities and weapons for your troops.

Of course the most interesting experience is the Lightsaber Battles. It’s very important to calibrate your device and beacon so that everything is aligned well and in the right scale. Even then you might experience some issues. The biggest problem is the lag between your real movements and your digital lightsaber but it’s not something that makes the game unplayable. The characters that you will face in lightsaber duels are respectively Darth Maul, the Seventh Sister, the Grand Inquisitor, Darth Vader and Kylo Ren. Kylo is the strongest opponent, and you will need some skills (including physically ducking and strafing) to defeat him. I have to tell you that if you do 2-3 consecutive battles you will need some time to catch your breath which is great for such game. 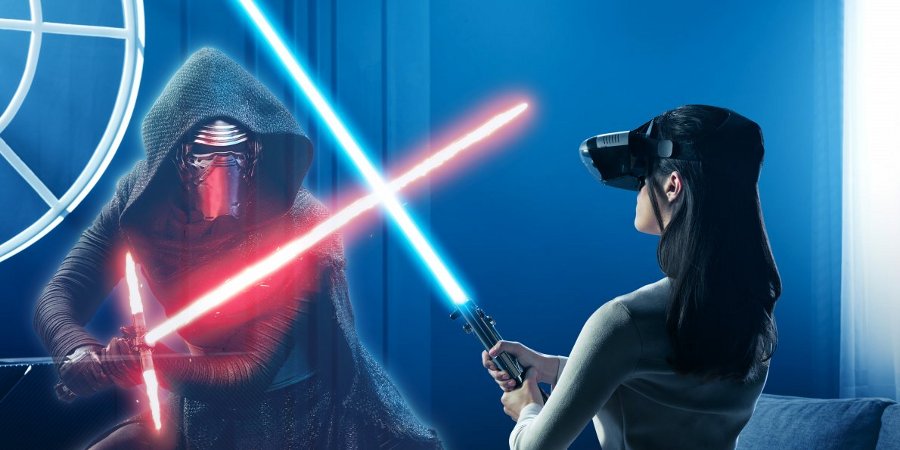 I personally loved the Strategic Combat, not because of some unique gameplay but because it is so cool to sit down on the floor and watch the holographic buildings and vehicles doing their jobs and the armies of the enemies advancing on your position, marching across your living room carpet. Using the lightsaber control, you apply turrets, troops, and even Jedi heroes to help you stop the invasion. Each planet has its own specific troops. For example, on Naboo, you fight battle droids. On Hoth, stormtroopers. On Takodana, First Order stormtroopers and so on.

Overall, the experience from Lenovo’s Jedi Challenges is more than positive. We tried the set with at least dozens of people and they were all very impressed. The cost of the whole set is $200 in the US and 250 British pounds in the UK. This is not cheap, but for what you get it’s worth it. And I am not just saying this just because Lenovo sent me a set. Some sites are selling replica lightsaber hilts in the same price range and here you get so much more.

You can buy Star Wars: Jedi Challenges in Best Buy stores and online at bestbuy.com and lenovo.com. For more information you can visit jedichallenges.com. 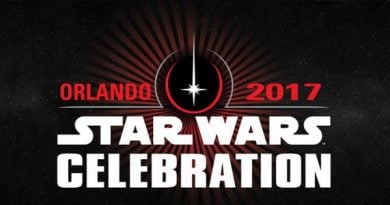 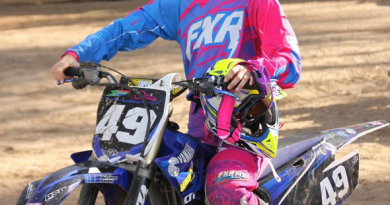 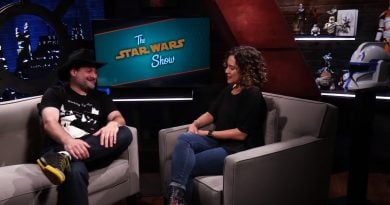 The Star Wars Show: Interview with Dave Filoni and More