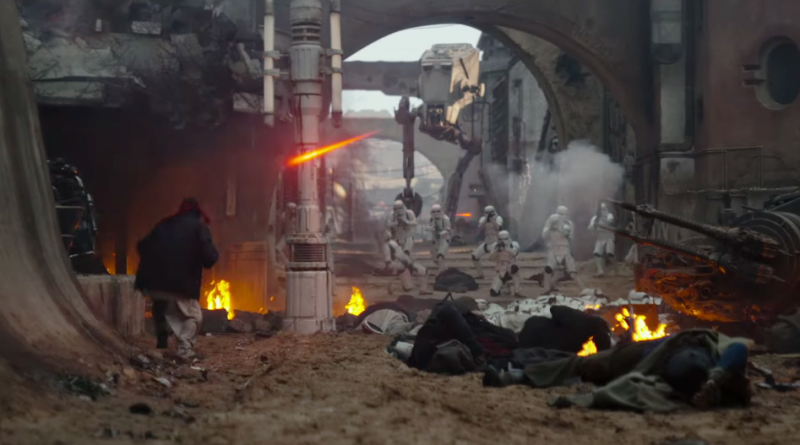 The week on our Star Wars Weekly Buzz! 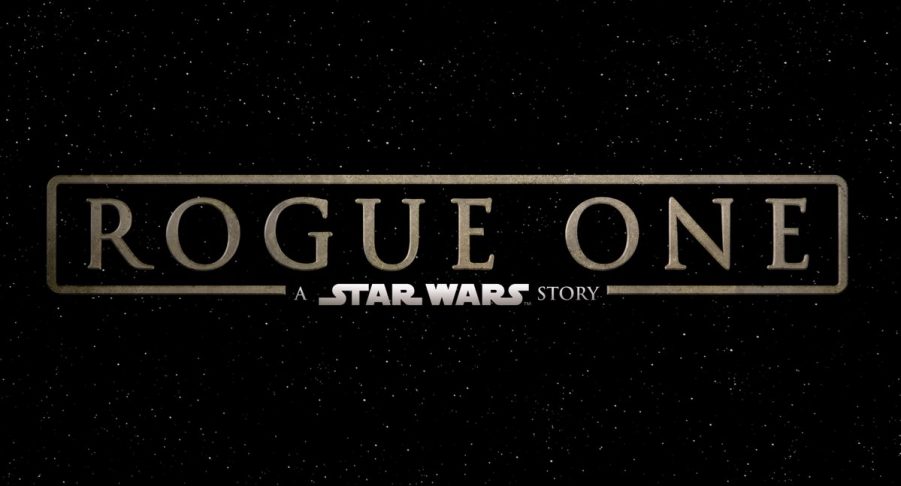 This week we start with the news that recently the info on the Rogue One IMDb page got a big update. As you know IMDb can easily be edited by anyone, but this info seems pretty legit. For example they have updated the writing credits. Now they have:

Also there are a few new characters listed like:

A new filming location has been added : Morocco.

Several new stunt doubles were added – 9 are marked as “re-shoot”, 3 as additional photography, and the rest are normal:

You can check the whole listing here. (via StarWars-Union)

Recently, StarWars.com had a chance to catch up with the author to talk about the long wait.

Speaking of books, here’s the full video with the writers roundtable from NYCC:

Star Wars Gets A B-Movie Horror Makeover In New Posters https://t.co/gkVmzgeo8j via @dreadcentral

Boyega does comedy on a commuter train.

Commuting to the London suburbs, Star Wars actor John Boyega decided to assist in making announcements at each of the 15 stops, telling anecdotes at each one – such as the fact his grandad pronounces Penge ‘Pen-gey’ and also made a few Star Wars-related jokes.

So decided to assist my sister @blessingboyega and her amazing colleagues at south eastern rail with some informative announcements. Hope everyone on the 2:40 train to Orpington had fun listening to me talk rubbish 😬 #Imrandom

Boyega uploaded a video of his antics to Instagram with the caption ‘So decided to assist my sister @blessingboyega and her amazing colleagues at south eastern rail with some informative announcements. Hope everyone on the 2:40 train to Orpington had fun listening to me talk rubbish #Imrandom.’

To all the passengers on the 2:40 south eastern train to Orpington, thank you for listening to my nonsense 🙂

Get ready for a brand new way to experience and treasure the movies you love, with the Big Sleeve Edition. Presented in a stunning 12-inch sleeve, this beautifully-crafted collector’s item comes with a Blu-ray™ and DVD of the movie, and exclusive 12” art cards you’ll cherish forever. So take home a movie experience the whole family will enjoy, with The Big Sleeve Edition.

‘The Force Awakens’ is nominated for a AMA…….

#TheForceAwakens is nominated for Top Soundtrack at the @AMAs! RT and vote here: https://t.co/xsO5tbNJjb #AMAs pic.twitter.com/euoX1X3D0M

Rogue One writer Gary Whitta has an interesting comment about the latest episode of Rebels (which he wrote as well):

This week’s #StarWarsRebels feels like it could have been a mission right out of Larry Holland’s Tie Fighter flight sim pic.twitter.com/tvTR8FfZDi

Nothing happens by accident. https://t.co/kAGqhIPlMm

It seems that we will have our first look at the Gigoran species in the upcoming comic series Doctor Aphra. As a big fan of Moroff from Rogue One, I can’t wait to find out more about these aliens:

Awesome! It appears we will be getting some backstory on the Gigoran aliens in the upcoming Dr. Aphra comic series.https://t.co/O05iuGMlA8 pic.twitter.com/73AZmYcdRK

Check out some of the concept art that we created for our recent Star Wars Commander expansion trailer! https://t.co/a43P21z6Cc pic.twitter.com/4GYiQqRnbZ

“Very funny. Very funny”. – Short Round: Indiana Jones and the Temple of Doom

The latest episode of The Star Wars After Show is here:

This week on The Star Wars After Show; Andi Gutierrez sits down with Lucasfilm employees and Star Wars Fans Leland Chee, Justin Bolger, and Cara Pardo talk about the new Rogue One trailer, their thoughts on the new poster, and the newly announced Doctor Aphra comic.

Maz likes to knit in her spare time!

Fun fact: The name of Maz Kanata’s ship in the Complete Locations book is a knitting term. 🙂

That’s not Qui-Gon in the Jedha sand.

Considering the above comment, it surely is not Obi-Wan as well, but that doesn’t mean that the fans can’t speculate on that.

@Mikey_Brennan Nah, the trailer only just came out. Now’s the time for rampant rumors.

The aliens that we’ve seen in the Rogue One trailer are new ones.

I guess the case is closed about Vader’s inner cape.

The best gift? Finally have something to point to when Rogue One Vader inner cape fret tweets fill my timeline.

Are we ever going to see George Lucas’ story for Episode VII? 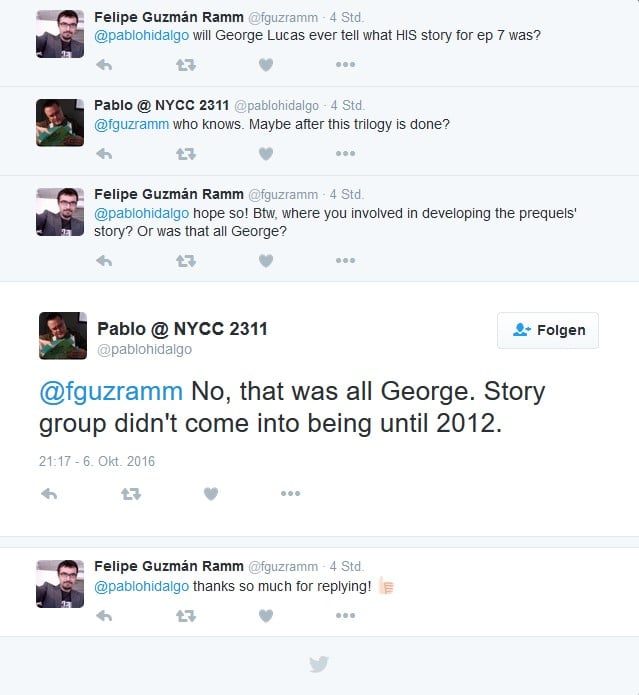 What is Disney’s influence on all new Star Wars projects. 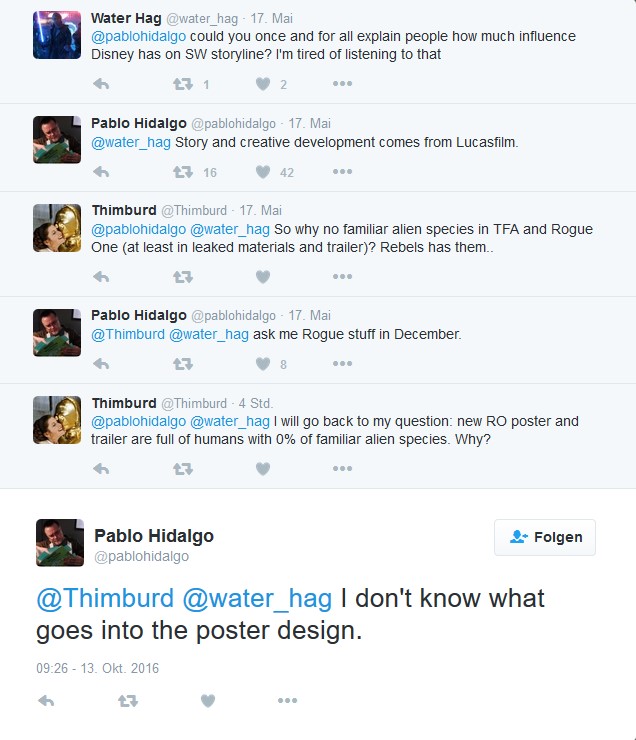 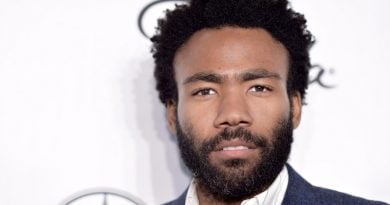 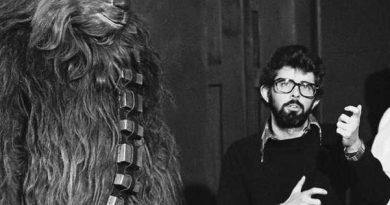 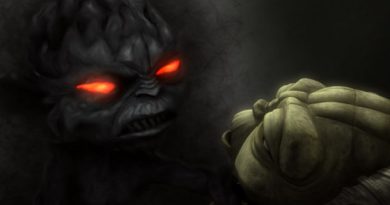