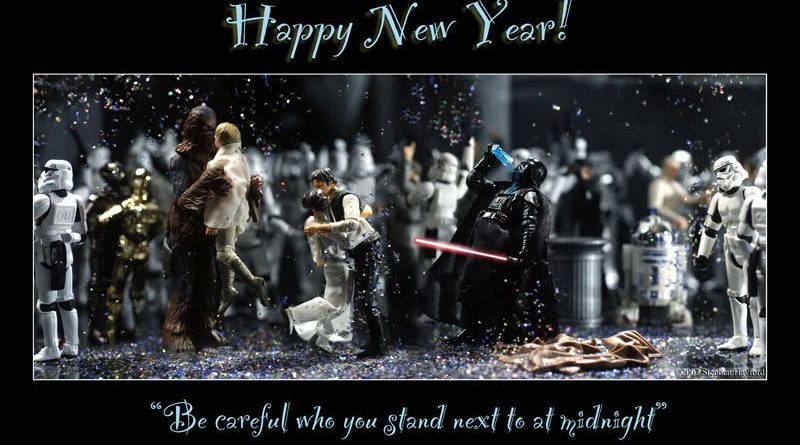 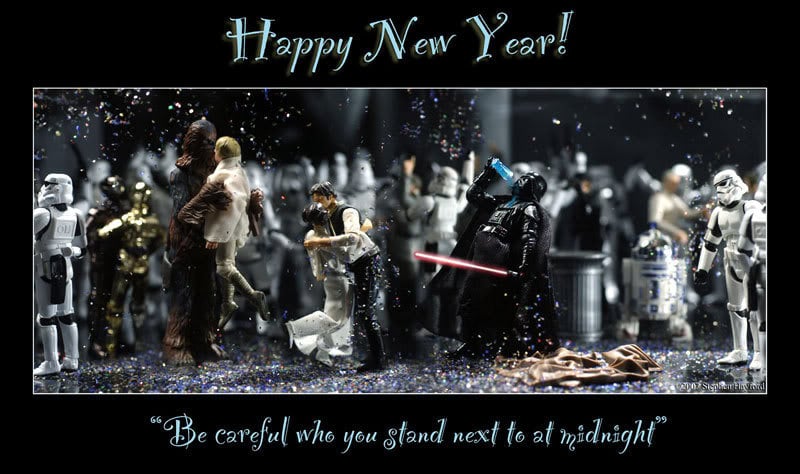 As the last hours of 2014 tick away, with 2015: The Year Of Star Wars hot on its heels, the Episode VII News staff would like to take a moment to wish all of you a very Happy New Year.

(The aforementioned wish will officially take place after the jump!) ;^)

Well, it’s been a mighty exciting year to be a Star Wars fan, and yet it’s nothing compared to what awaits us next year and in years to come. While Opening Day for The Force Awakens is still almost a year away, New Year’s Day 2015 is still the “terminator line” beyond which a new series of Star Wars movies- both core trilogy and stand-alone/spin-off films-will finally see the light of day.

Just think about it – a year ago, we knew little more than that there would be a new Star Wars sequel, and that it would be directed by J.J. Abrams. And now it seems that new rumors (some of which are bunk, but many of which do indeed seem to be the genuine article) tend to arrive with increasing frequency each week. We’ve seen the first bits of footage from the new movie, griped and debated about the details obsessively, as only we Star Wars fans can do, and are now well into the year-long countdown before the cinema lights dim and once more we hear… well, maybe not the good old 20th Century Fox fanfare from the old days, but certainly the old familiar crash of the Star Wars Main Theme as it bursts off the screen at us.

I think this is bringing out the inner ten year-old in all of us, and we here at Episode VII News are very proud and excited to be able to share the experience with you all, while bringing you what we hope continue to be some fascinating news scoops about the production as well as some fun editorials about various Star Wars minutiae. And of course, we always enjoy chewing the ol’ fat with all of you over a virtual mug of Corellian ale in The Cantina.

But of course, it would all be fairly pointless without the community that you have all helped to build. All of us here in Mod-Land would like to thank you all for a fantastic year, and for continuing to make the waiting and speculating process so much fun. And by this time next year, we’ll have a brand new Star Wars movie to endlessly discuss and pore over, with many more yet to come. It’s only going to get better from here on in, folks!

Here’s to 2015 and onward. Happy New Year to each and every one of you!