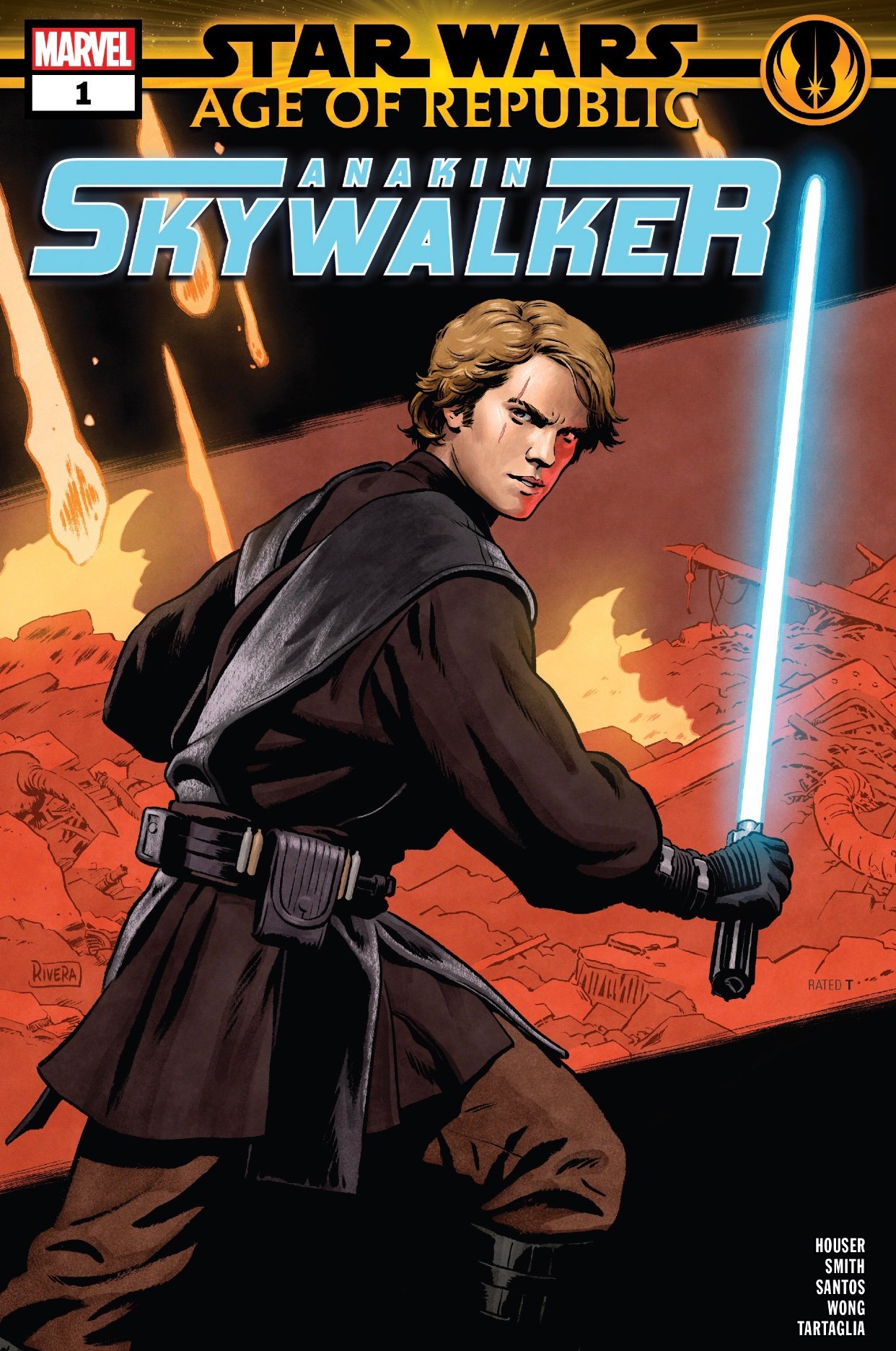 Age of the Republic continues this week with the Chosen One himself, Anakin Skywalker. The powerful Jedi Knight needs no introduction but I think Anakin will surprise a lot of you in this issue. Marvel continues to send these love-letter issues to fans as we approach the end of the Clone Wars and the rise of the Empire before moving into the Age of the Rebellion. This issue captures Anakin when he is at his peak heroism in the midst of a delicate situation that could fracture the Republic further or find them new allies in their fight against Dooku and the Separatists. SPOILERS AHEAD…. 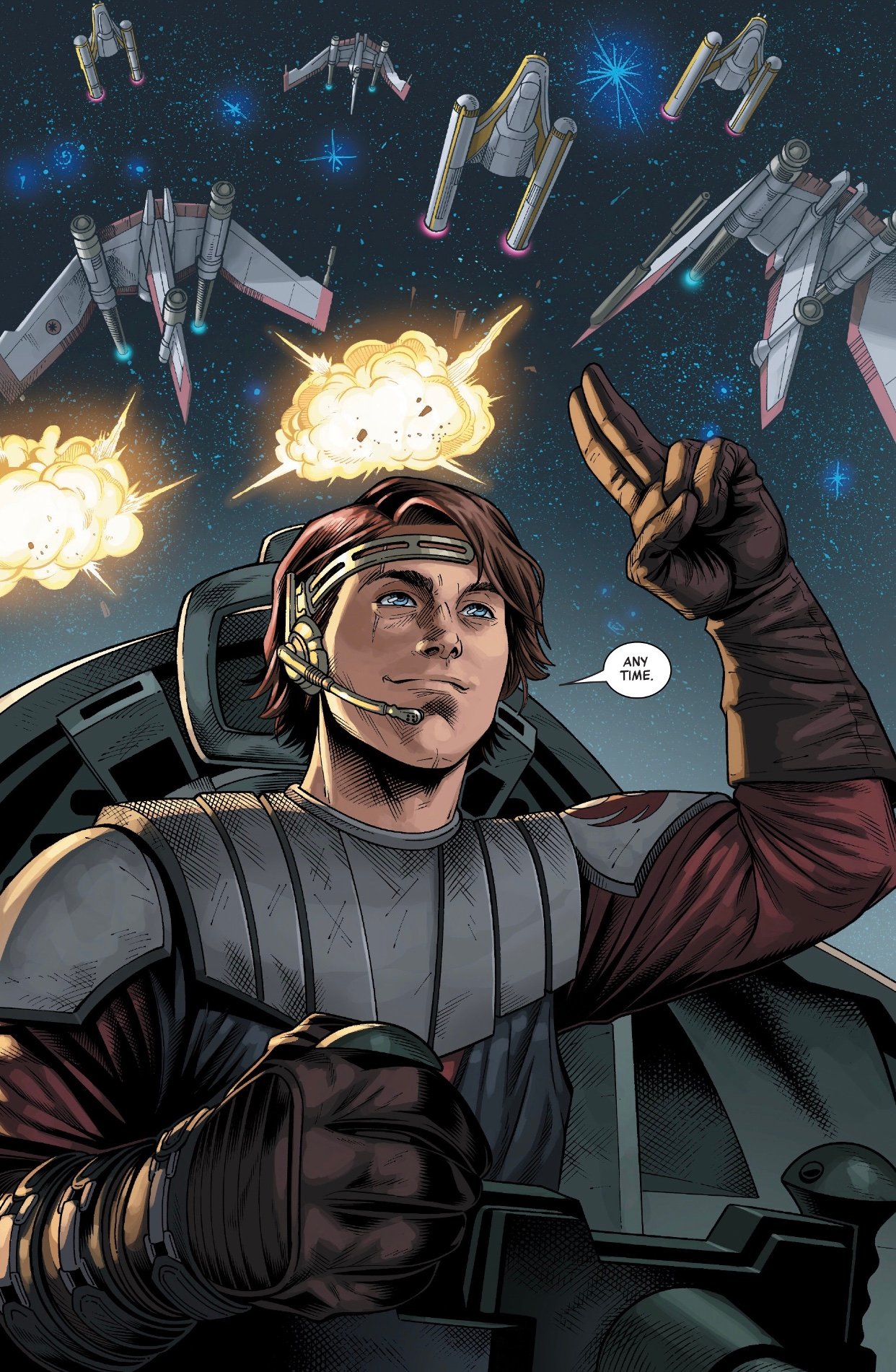 The space battles in this issue are worth the cover price alone, but luckily the story is just as good! This issue has some vibrant art to go along with a very enjoyable story about Anakin Skywalker. I really can’t say enough good stuff about the pages artists Cory Smith, Wilton Santos, inker Walden Wong, and colorist Java Tartaglia put together; this issue is so cool! The opening space battle serves as a great introduction to the story. The Republic has engaged a large and unexpected cluster of droids they did not expect to find in the Corvair sector. After the battle is won, Anakin seeks answers. It’s great to see Anakin in his familiar element, leading the charge against a droid army at the height of the Clone Wars. 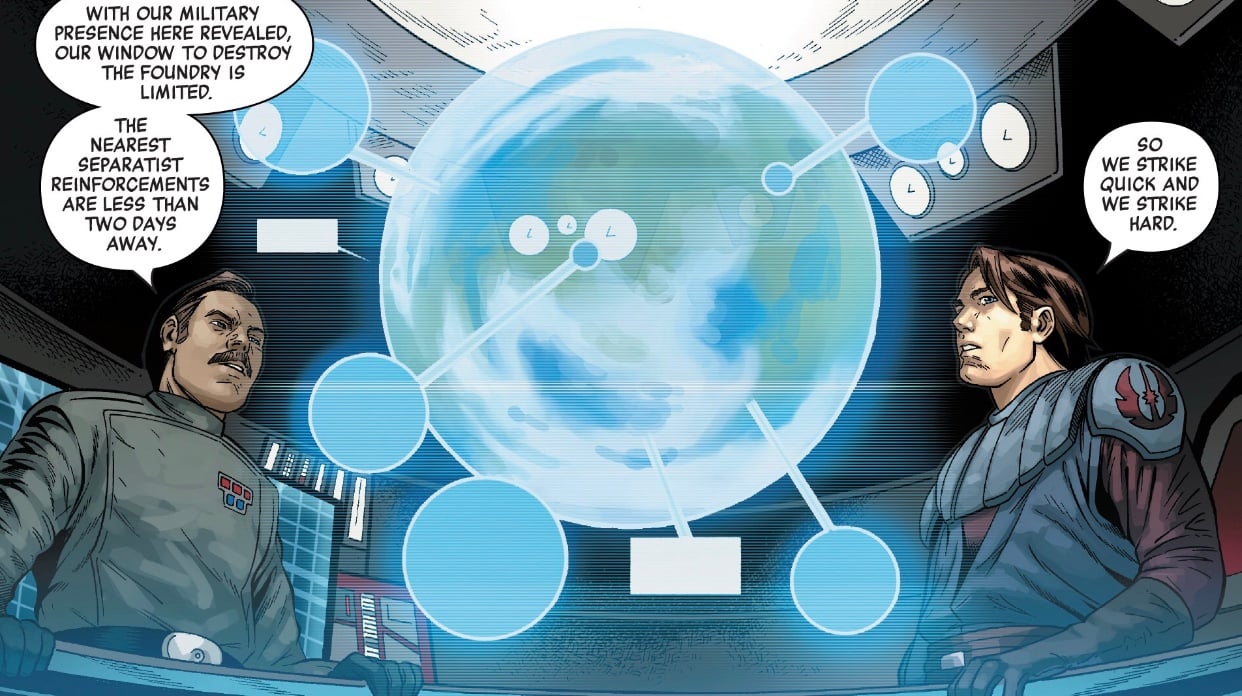 Aboard the Resolute, Anakin is briefed by Wullf Yularen that this droid contingency came from a foundry on the third moon of a planet called Kudo. The Separatists have discovered the Republic is near, so Yularen is eager to take out the foundry. Anakin agrees that a swift attack is the best course of action until he looks into the details of the mission. The Jedi general is alarmed at the estimated casualties the Republic’s attack may bring, specifically to the Kudon population who have remained neutral in the Clone Wars. Yularen believes the establishment of a droid foundry on Kudo speaks for itself in terms of where the Kudon stand and that people inherently die during a war – better them than the Republic troopers. Anakin tries to propose alternatives, but the only way forward to minimize Republic casualties is a strike that would take the foundry down from the inside out, killing everyone inside. For someone with a streak of darkness that seems to be especially prevalent when it comes to Republic victories, Anakin is very conflicted about this.

We all know Anakin has been at the frontlines in some of the worst battles of the Clone Wars, but this moral dilemma demands more than swinging a lightsaber or flying a fighter into a dogfight. Because the slow burn of this decision is contrary to the live-or-die decisions Anakin is usually presented with, a weighty internal conflict between the Jedi and the general crawls through Skywalker’s mind. The worst part for Anakin is that neither of his dual roles can reconcile the death of civilians. Obi-Wan has been alerted by Yularen that Anakin has his hesitations, so the Jedi Master talks through these issues with his former Padawan. There’s no sage advice or ancient Jedi wisdom invoked, but Obi-Wan does demonstrate how powerful a good listener can be as Anakin questions himself and the Jedi for their complicity in this mission. The only words Obi-Wan leave Anakin with are, “Trust your feelings. And trust the Force.” 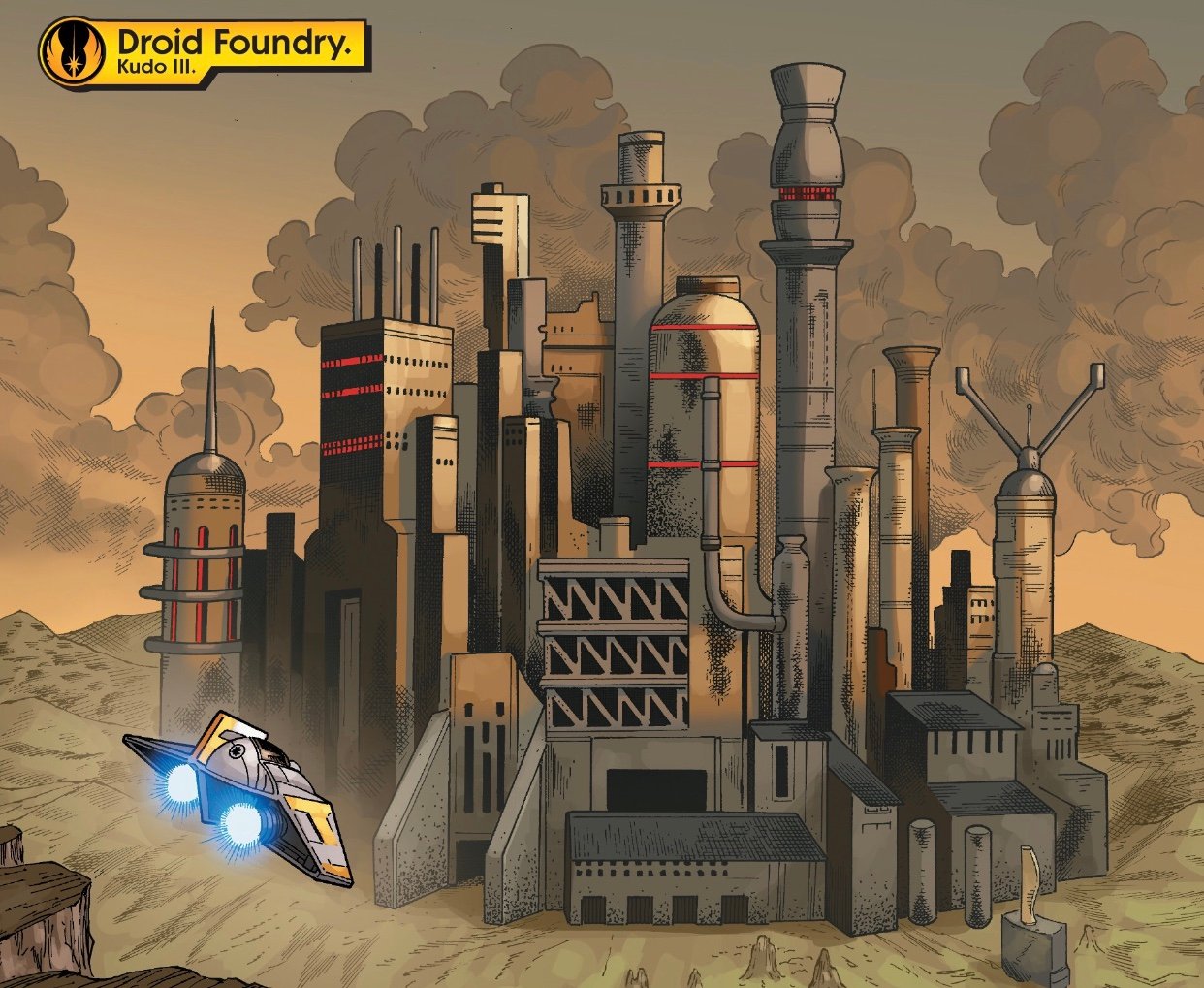 Anakin does just that. Against Yularen’s wishes, he departs for the droid foundry alone to see what is really going on. Expecting to find a massive city filled with droids, Anakin is surprised to find an isolated droid foundry that appears to be defenseless. It makes no sense to him why the Republic, based on intelligence they received, would need to launch such a devastating attack. As Jedi do, Anakin chooses to investigate. Once he’s inside of the foundry, Anakin senses suffering, and as the sensation gets stronger until he finally discovers the source of this pain. 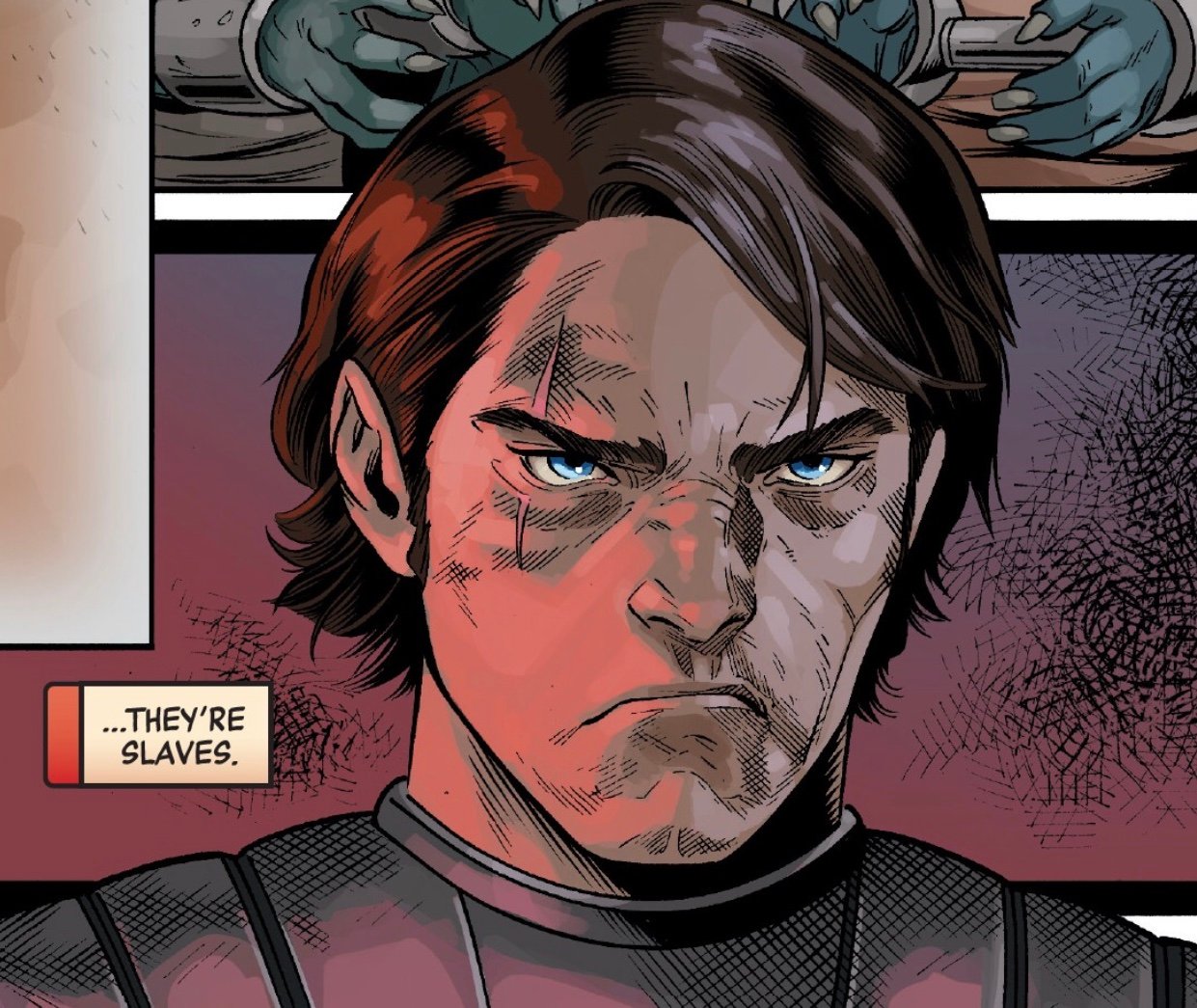 The Kudon people have not allied themselves with the Separatists, they’ve been enslaved by them. We know Anakin has some triggers and the bondage he was raised in is certainly one of them. Vivid memories of work under Watto and his mother left behind while he went free rapidly go through Anakin’s mind, prompting the Jedi to use his powers to defend the Kudons. With a lightsaber in hand, Anakin makes very short work of the small complement of battle droids deployed to guard the foundry. It turns out the foundry was nowhere close to the impenetrable fortress the Republic intelligence believed it to be. The Kudons explain they were gassed by the Separatists and then awoke in this foundry as slaves. They were also told repeatedly the Republic was on its way to kill them. 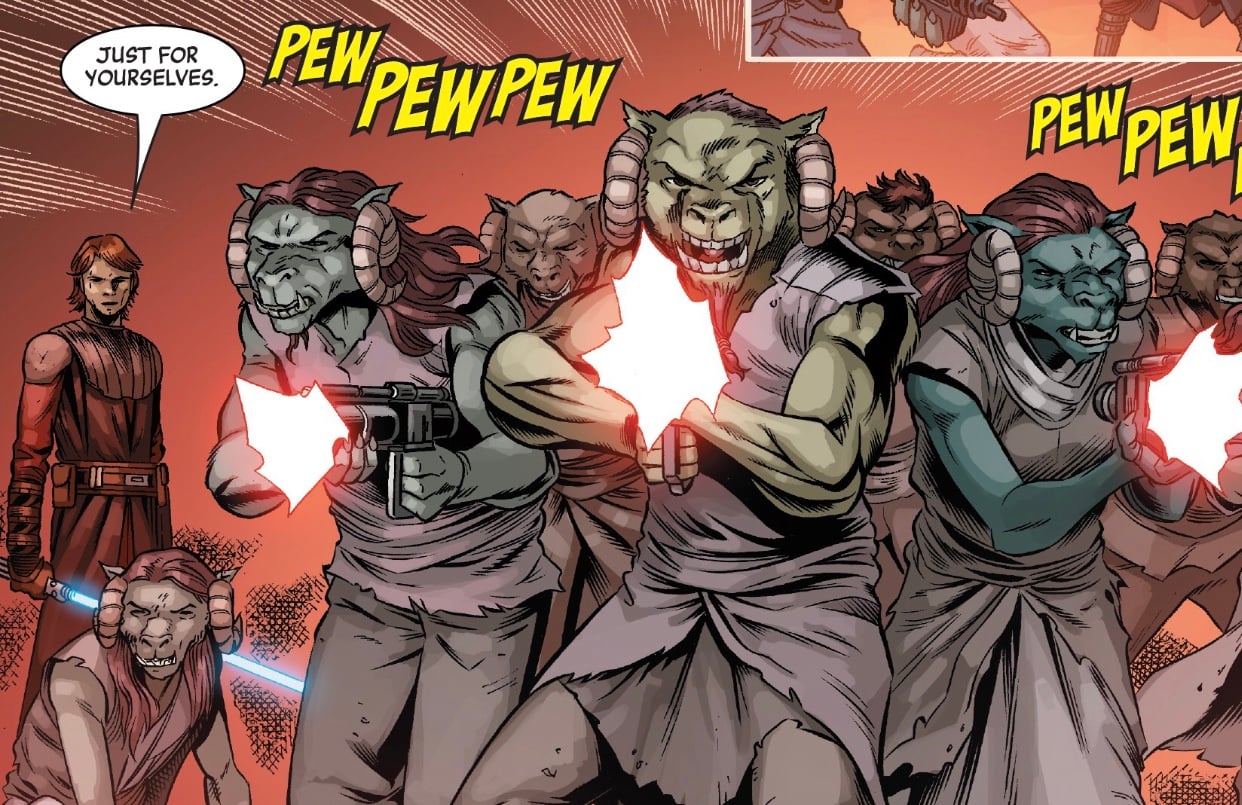 Anakin is done asking questions. He’s seen enough. After slicing through the restraints on the Kudons, he turns over some blasters so they can take up arms against their oppressors. I love how Anakin lingers in the background here as he watches the tiny liberation take place. This must be an extremely satisfying moment for him. This glimpse into Anakin’s heroism made me very happy. The extremes of Anakin Skywalker is not foreign territory to Star Wars fans, so this nuanced mission to make sure the Republic and the Jedi were doing the right thing was unexpected for me. I’m happy to see Anakin Skywalker being a hero, not just to the Republic and the Jedi, but to that little boy on Tatooine he left behind to follow the Force.

Back on the Resolute, the Jedi and Yularen have figured out this was a setup. Destroy the seemingly helpless foundry, filled with Kudon civilians, and Dooku uses the massacre as a rallying call for more systems to join the Separatists. Sounds like ‘Sheev Palpatine 101’, if you ask me. Pretty diabolical stuff, as well as preying on Anakin’s weakness, since I’ve no doubt Darth Sidious knew he would be on the mission. Yularen and Obi-Wan both compliment Anakin on his caution, noting that even if the Kudons don’t join the Republic, at least it will be their choice.

This is my favorite Age of Republic issue so far and I’m grateful writer Jody Houser continues to tell smart, understated Star Wars stories instead of big, explosive ones. Sure, those fireworks have their appeal, but a lot of these characters have already danced the big dance in a trilogy and a six-seasons (going on seven) television show. I think fans appreciate this glimpse into Anakin’s psyche and we’re reminded that there were other things affecting him during these years other than his trepidatious relationship with the Jedi and Padme; the grief from his mother’s death, but also the residual trauma he felt from his childhood. That pain and fear didn’t take him to the dark side this time, and while it wouldn’t have been as extreme as killing younglings, leading an attack on an installation filled with civilians doesn’t wash off most people very quickly. Instead, Anakin trusted himself and the Force to guide him. It’s too bad we all know where he’s headed and I hope this is a story Luke and Leia heard at some point in their life. This story reminded me that Anakin was not just a tragic fall from grace or a moving plot device in the redemption archetype. Anakin Skywalker was a hero. 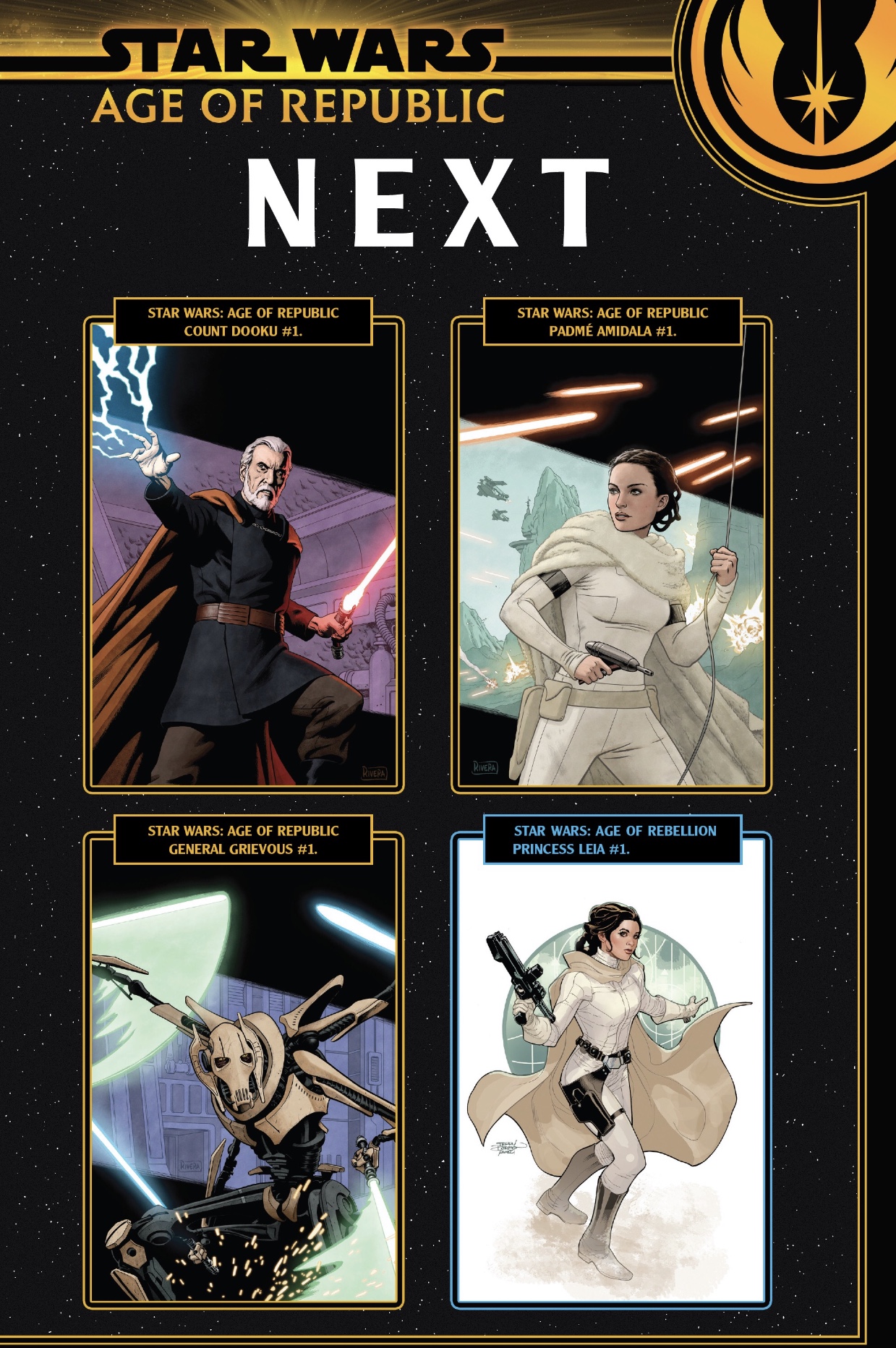