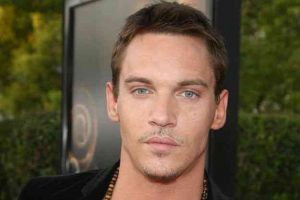 This time the rumor comes from Latinoreview, which are famous for their scoops on comic book movies. Mostly their reports are pretty accurate. Here’s what they have on this:

“My right hand man El Mayimbe recently heard that a young man who has only been in one major franchise movie (in a co-starring role) was in talks to star in the new Star Wars film.
Now, my source has told me more information…
This is a name that has been thrown around a lot, especially since he has a relationship with J.J. Abrams is The Tudors (2007-2010) star Jonathan Rhys Meyers.”

So take this with a grain of salt but for me if this is true then it’s a brilliant move. Jonathan is a pretty distinctive actor which doesn’t have many big movies under his belt. Some of his more memorable roles are in: Mission Impossible 3, From Paris With Love, August Rush, Match Point and more. He is also an appropriate choice not only because he has already worked with J.J. but because he is no stranger to sword/saber wielding. 😉

And while he is fairly old (36) to play one of the Solo/Skywalker descendants his face looks pretty young so anything is possible.