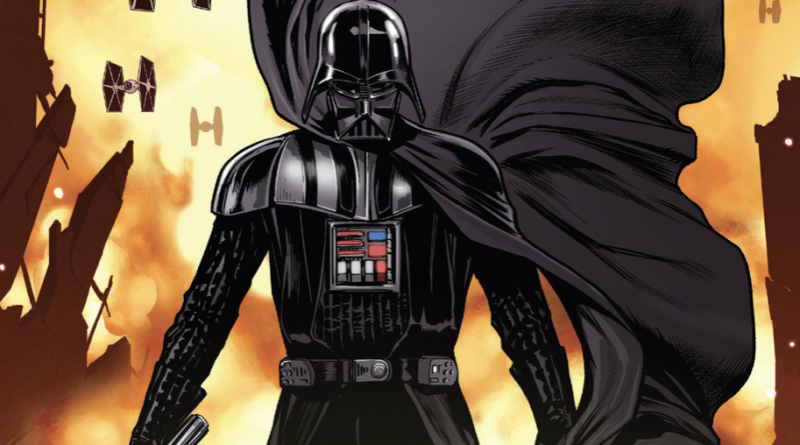 There’s still a Story Group, yeah? Or editors making sure writers don’t just go down bantha poodoo tangents with Star Wars comic series? I’m beginning to think everyone in the editorial process just forgot the Darth Vader series is still ongoing, including writer Greg Pak. This series went from a strong start to mediocre retcon, and now it’s just outright silly, self-indulgent, and convoluted. I don’t want to sound mean spirited or entitled, but fans deserve a better story than this messy, redundant one we’re being given.

I’ve been reading along since the beginning, and I’m still not entirely sure what’s going on in Darth Vader. At this point, Darth Vader’s been triple-crossed by Ochi of Bestoon, for which he’s reciprocating with a double-cross of his own, involving for Naboo handmaiden Sabé, and for some reason they’re on a planet fighting a giant water beast and its spawn. You with me here? 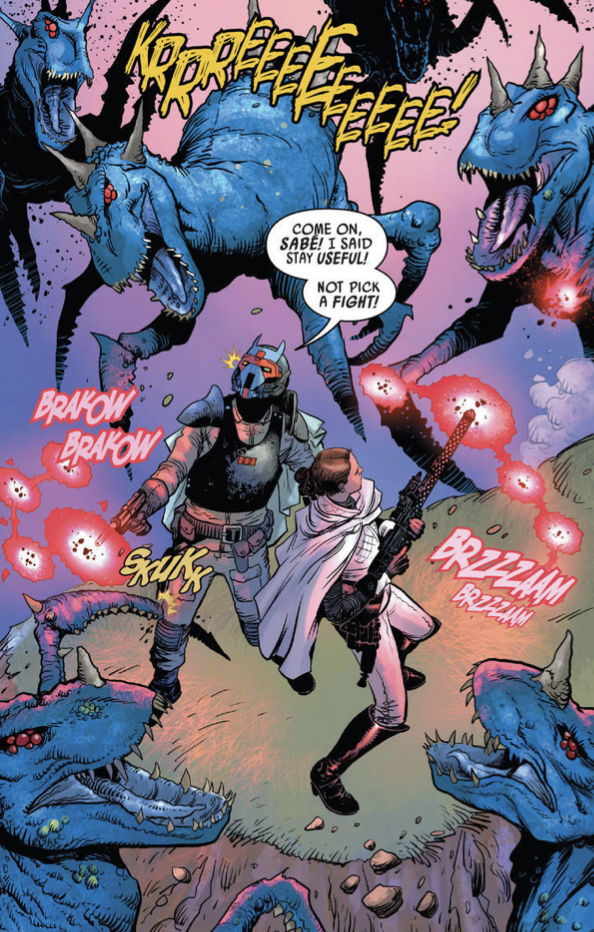 As the they battle these creatures, the three of them work things out together. Because… yeah… Vader really is one for listening to both sides of why someone would betray him. At this point, Vader seems like he doesn’t even exist in his own series. Don’t get me wrong, having a titular series about him could definitely work with his limited presence, but Vader’s in every scene, he’s just not really doing anything other than asking vague questions, telegraphing lazy twists or revelations at the end of each issue. 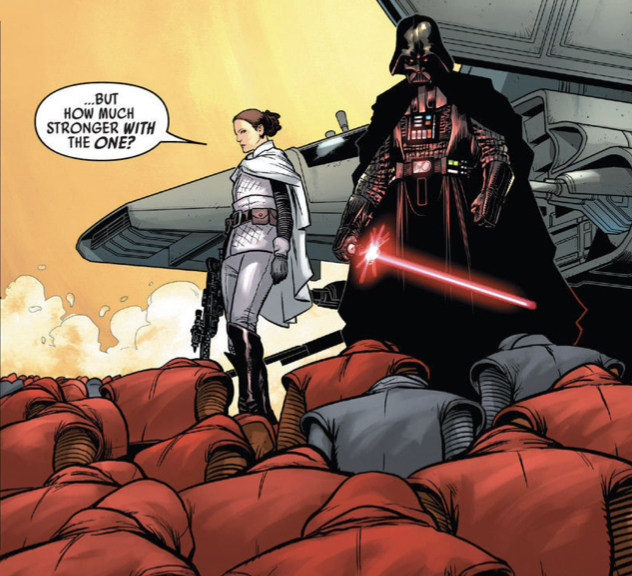 Somewhere in that messy battle, Sabé convinces Vader to pose as a Crimson Dawn cell leader. Just as soon as these soldiers decide they don’t like that, Vader wipes out almost all of them. This murderous demonstration commands the respect of all the other soldiers, who suddenly become subservient bow down to their new leader. Um… 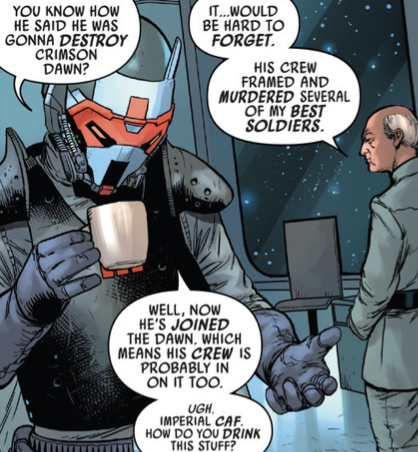 Meanwhile, Ochi is onboard the Executor working on his next betrayal and attempt to bring down Vader. Reminder, Ochi is a Crimson Dawn loyalist, but at this point Pak’s pulled him in so many directions I don’t really think he’s loyal to anyone. Nor do I care, because that’s what happens when you take a very dull character and strip them of any value system, whether those values are good or evil. The only thing Ochi does in this issue is stir up trouble for Vader, convincing the acting commander of the Executor that Vader’s betrayed the Empire for Crimson Dawn and that he should take this opportunity to eliminate the Dark Lord and get into Palpatine’s good graces. Like every aimless character in this series, the commander does exactly what this completely untrustworthy Sith assassin tells him to without thinking twice. Creative writing professors would be screaming obscenities into their pillows at this point. 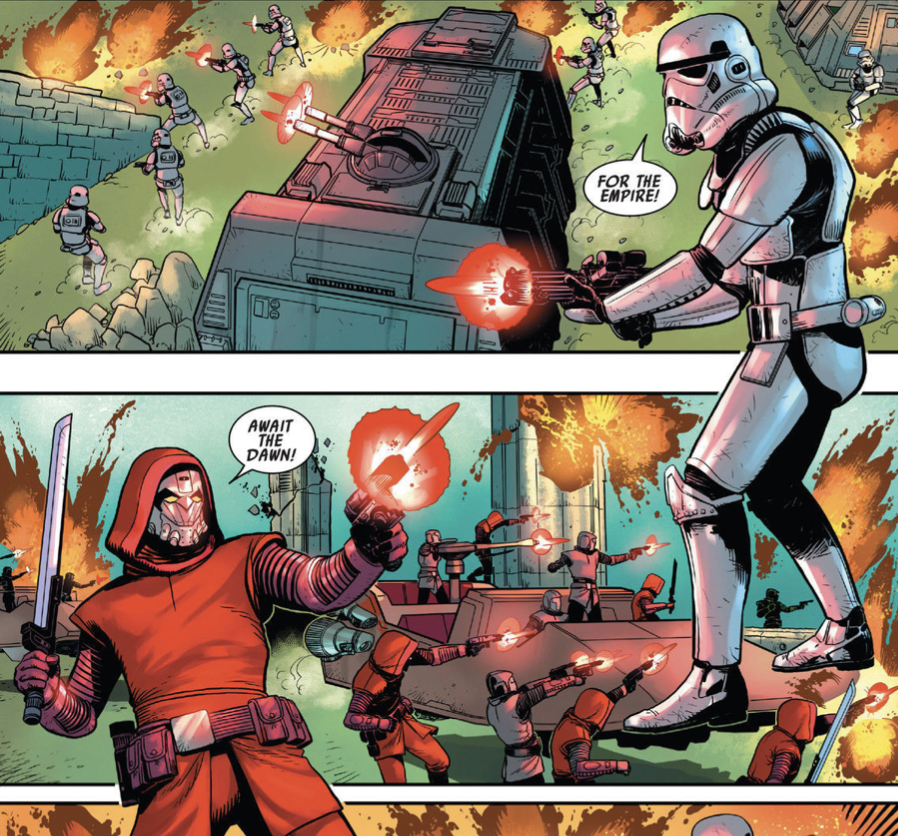 The Executor arrives at Oro Sankeria, where Beilert Valance and his group find themselves in the middle of the assault on Crimson Dawn. They don’t understand what’s happening. And they’re not alone. Vader puts in a communication to the Executor that all of this was a ruse to expose Crimson Dawn and get them to show their real numbers. Despite the fact the bucket heads dispatched from the Executor are doomed Vader orders them to keep fighting, and the commander goes along with it… even though he’s come to kill Vader who he believed was a Crimson Dawn member. Okay! 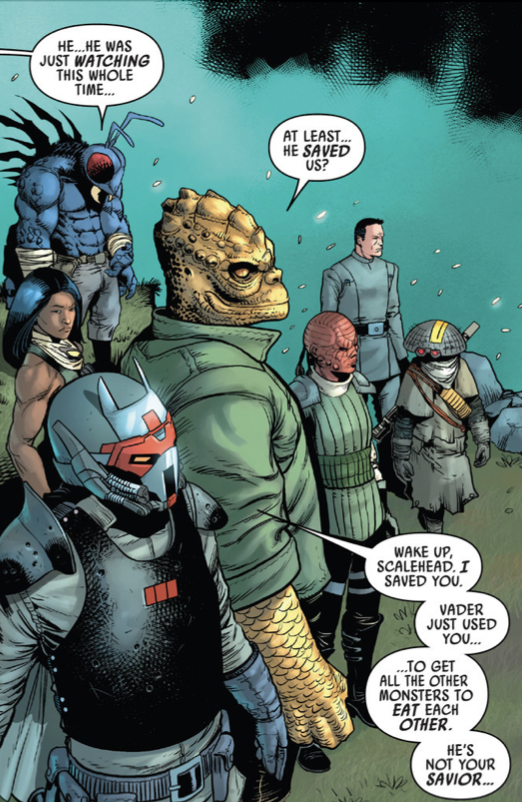 And Ochi’s back in the middle of everything, working for Vader again like nothing happened. While the others assess the devastation of Crimson Dawn and Imperial casualties, Sabé finally confronts Vader with a truth she’s kept quiet for some time. 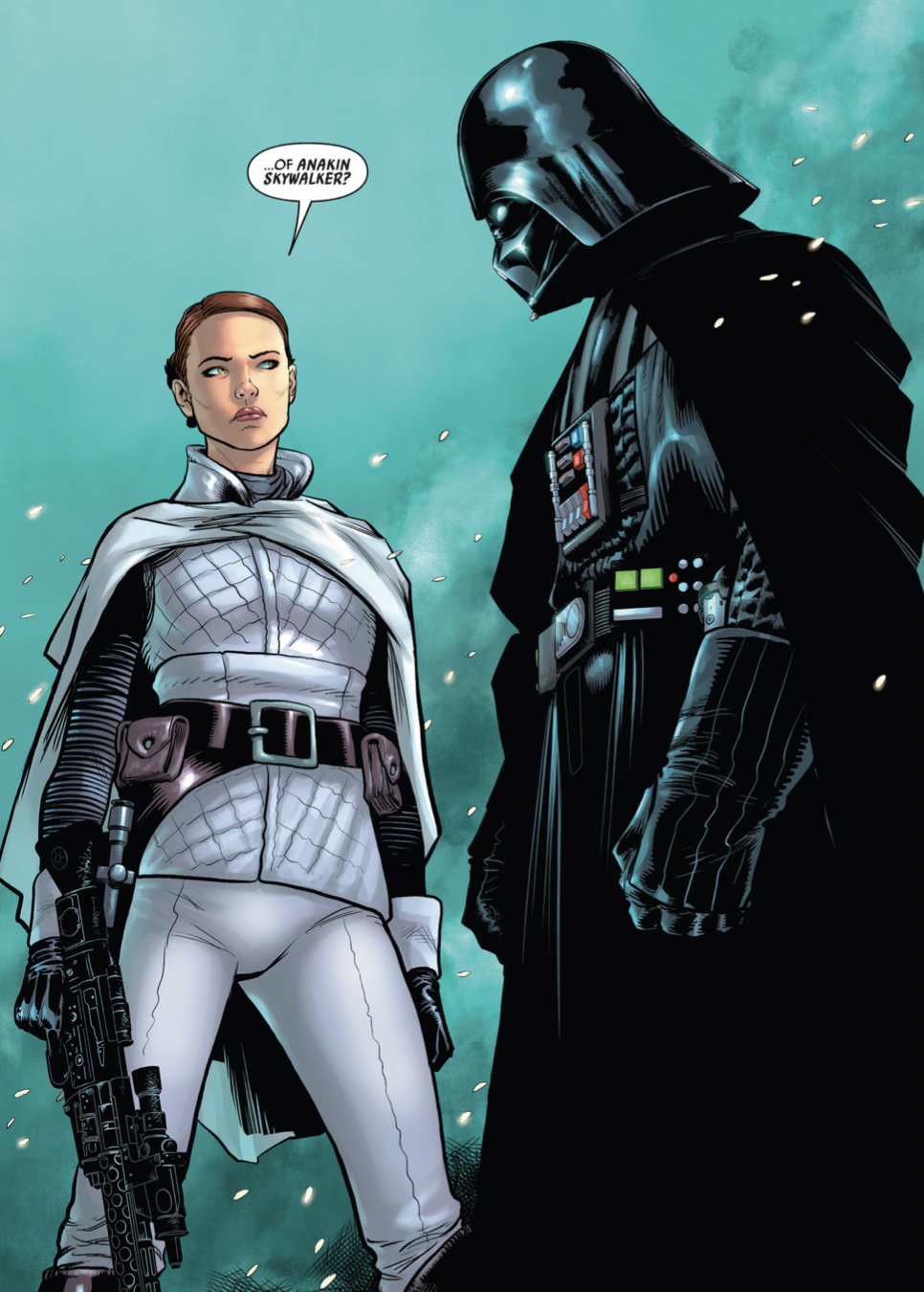 This is the one element of Darth Vader I remain interested in. What’s Sabé going to say to Vader? What will this stir up in Vader? Does Sabé survive these events? At this point, I’d much prefer a Sabé comic series from a different writer to get these answers. Honestly, both Vader and Sabé deserve much more attention than to have these important moments happen between superfluous battles. 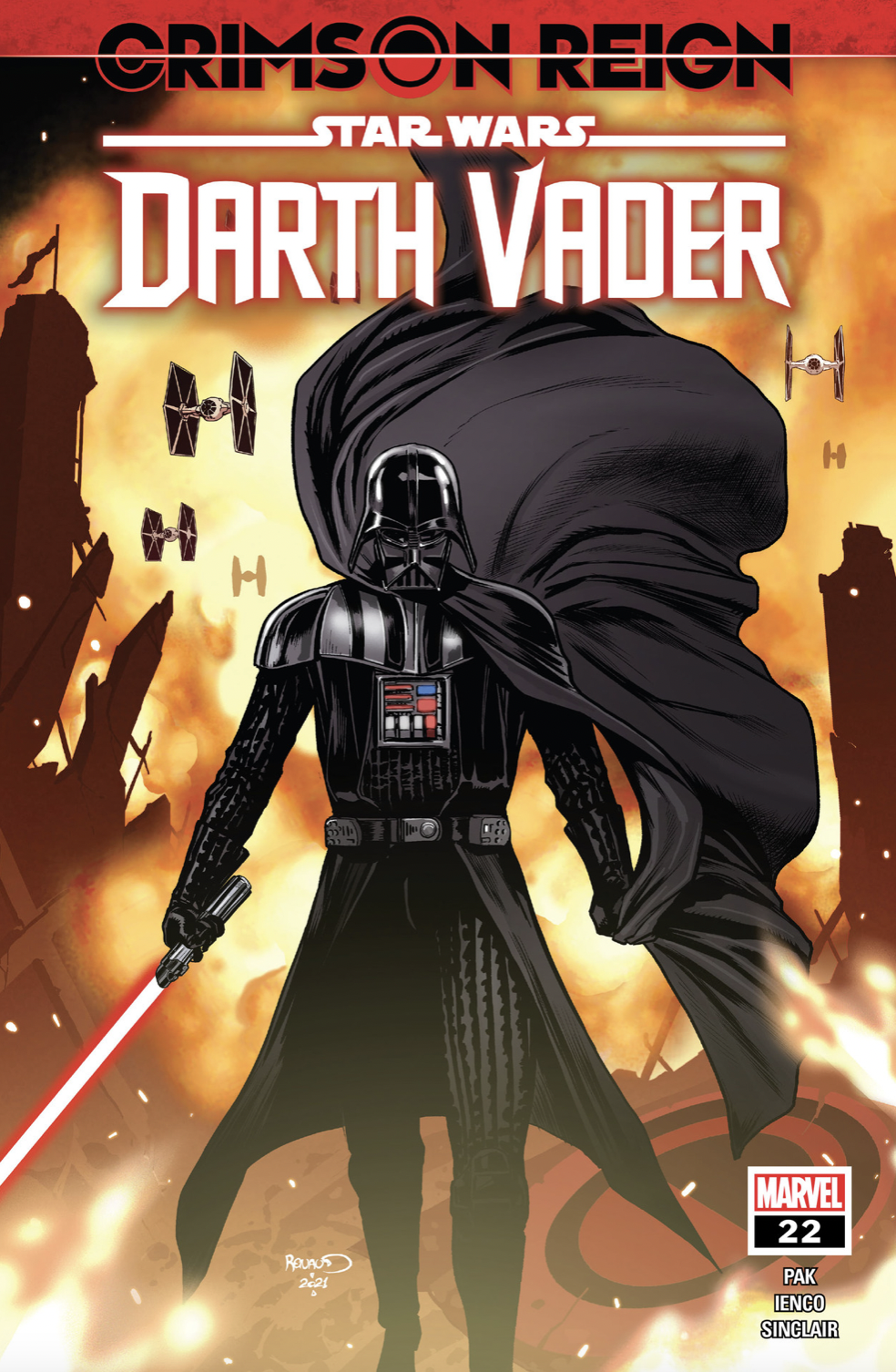 I’ve thrown enough salt and snark at writer Greg Pak in this review, so I’ll try to be more constructive with my words. Ultimately, I think it’s been a mistake to put Darth Vader in these two events, War of the Bounty Hunters and Crimson Reign. The character is interesting enough to carry his own story, and I imagine this puts Pak in a corner with what he can explore in the last year of the Sith Lord’s life. Perhaps, once this ends, the presence of Sabé will give us some meaningful stories and explanations. Aside from fine art by Raffaele Jenco and Alex Sinclair, there’s little to take from this issue and so many recent ones in what should be a really great series. Hope Pak can steer this back into the hyperlanes. 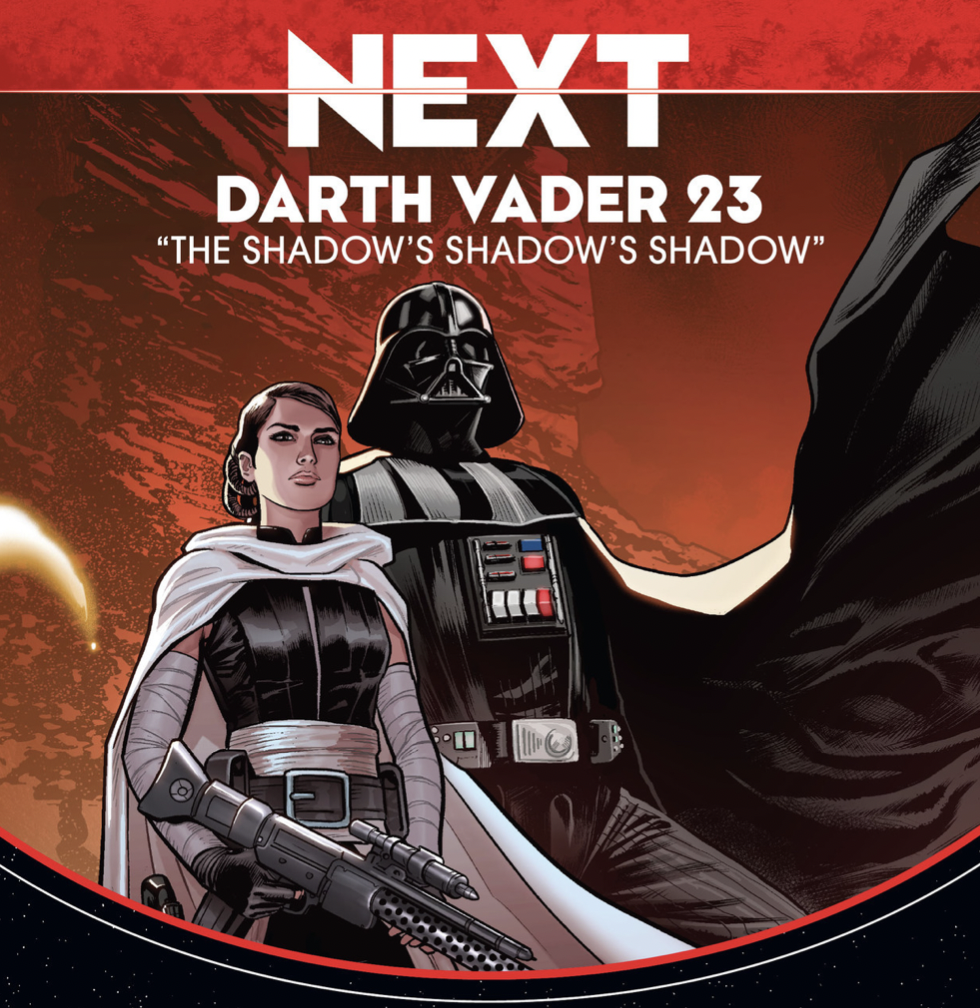 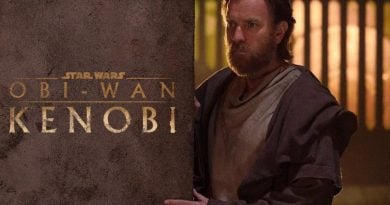 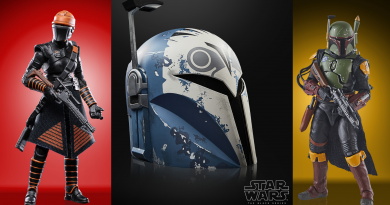 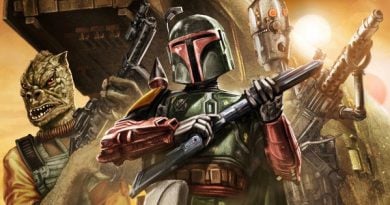