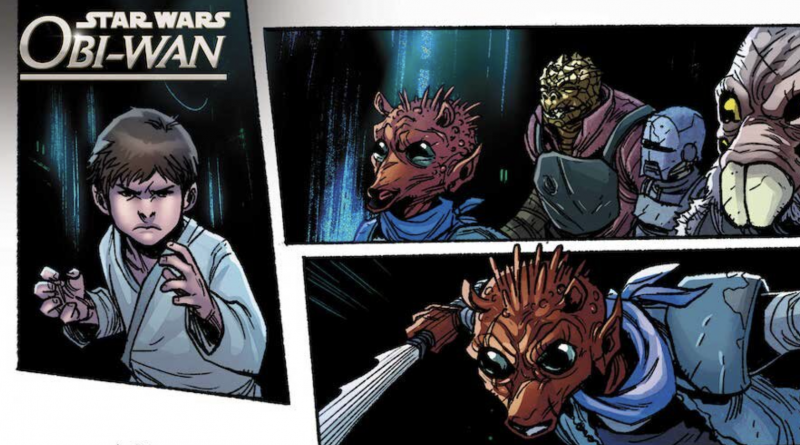 Star Wars comic fans have been looking forward to Star Wars: Obi-Wan for a while now, a series that promises to shed new light on periods throughout Obi-Wan Kenobi’s life that haven’t been covered yet in Star Wars canon.

The five-issue miniseries will not only give us a new look at his time spent on the deserts of Tatooine, but will also give us fresh insight into his time as Qui-Gon’s padawan, another story set during the Clone Wars and even his time as a youngling. It seems the series will begin with a story set in those formative years, with an adventure set in the Coruscant underworld. All these stories will be told in a flashback style, as “Old Ben” Kenobi reminisces on moments throughout his life. 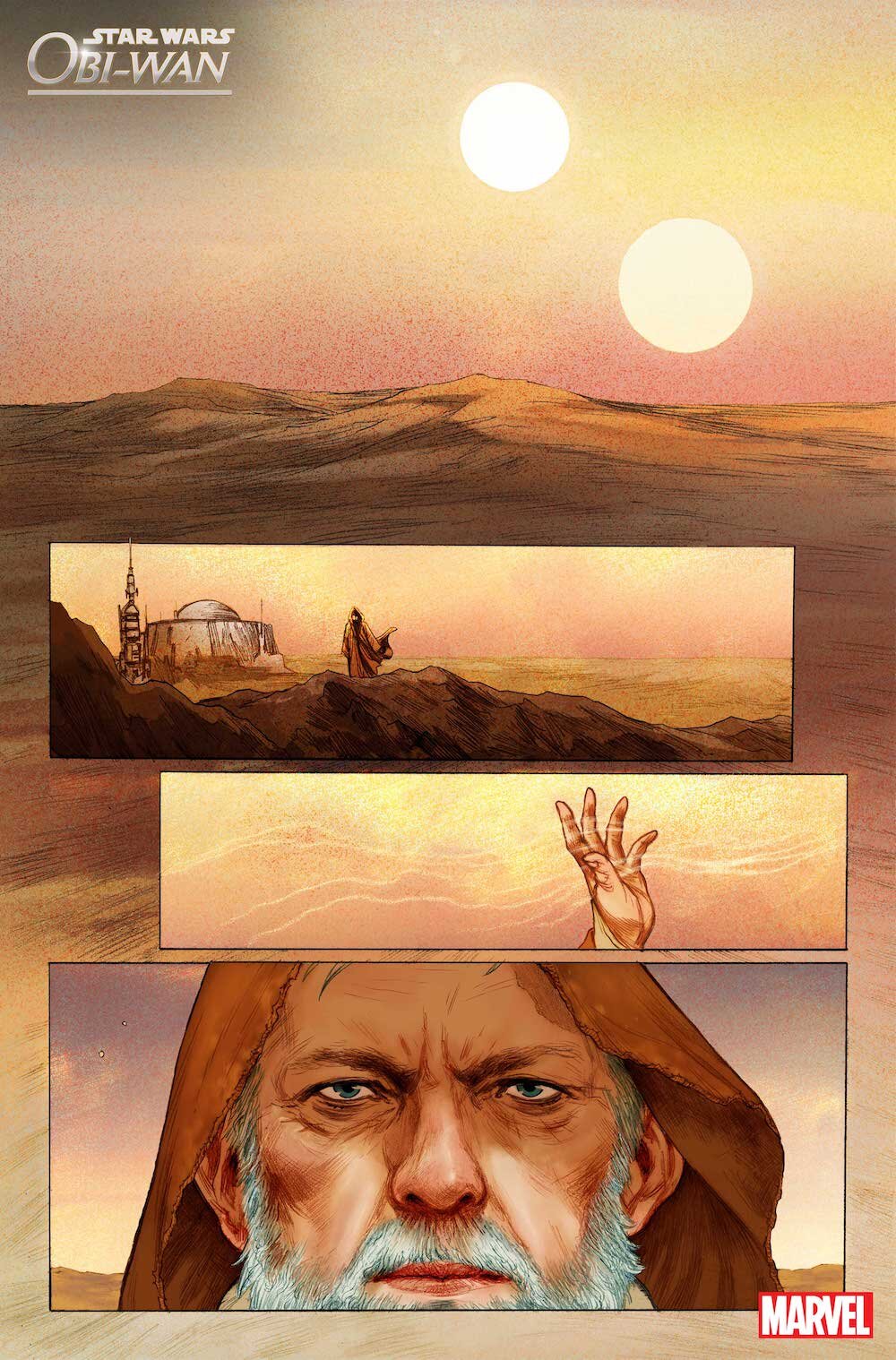 Author Christopher Cantwell spoke to syfy.com about what it was like creating this miniseries. It seems that the creative process started by trying to nail down Obi-Wan’s defining traits, so that these depictions all felt like the same person at various points in his life:

I think Obi-Wan, regardless of age, has certain indelible traits. He’s incredibly loyal, and has shown deep connection to certain people in his life. I also think he is honor-bound, but willing to push boundaries when need be. Part of that he likely learned from Qui-Gon, but a lot of that in my opinion is intrinsic.

I think these are things that would be present in Obi-Wan from an early age. I remember certain perspectives or feelings when I was eight. And I also watch my own eight-year-old son and know he’ll be seeing certain things and bringing certain perspectives to situations in a similar way for the rest of his life. Some things are already hard-wired in. Obi-Wan’s ‘hard wired’ traits are what we see in this story. 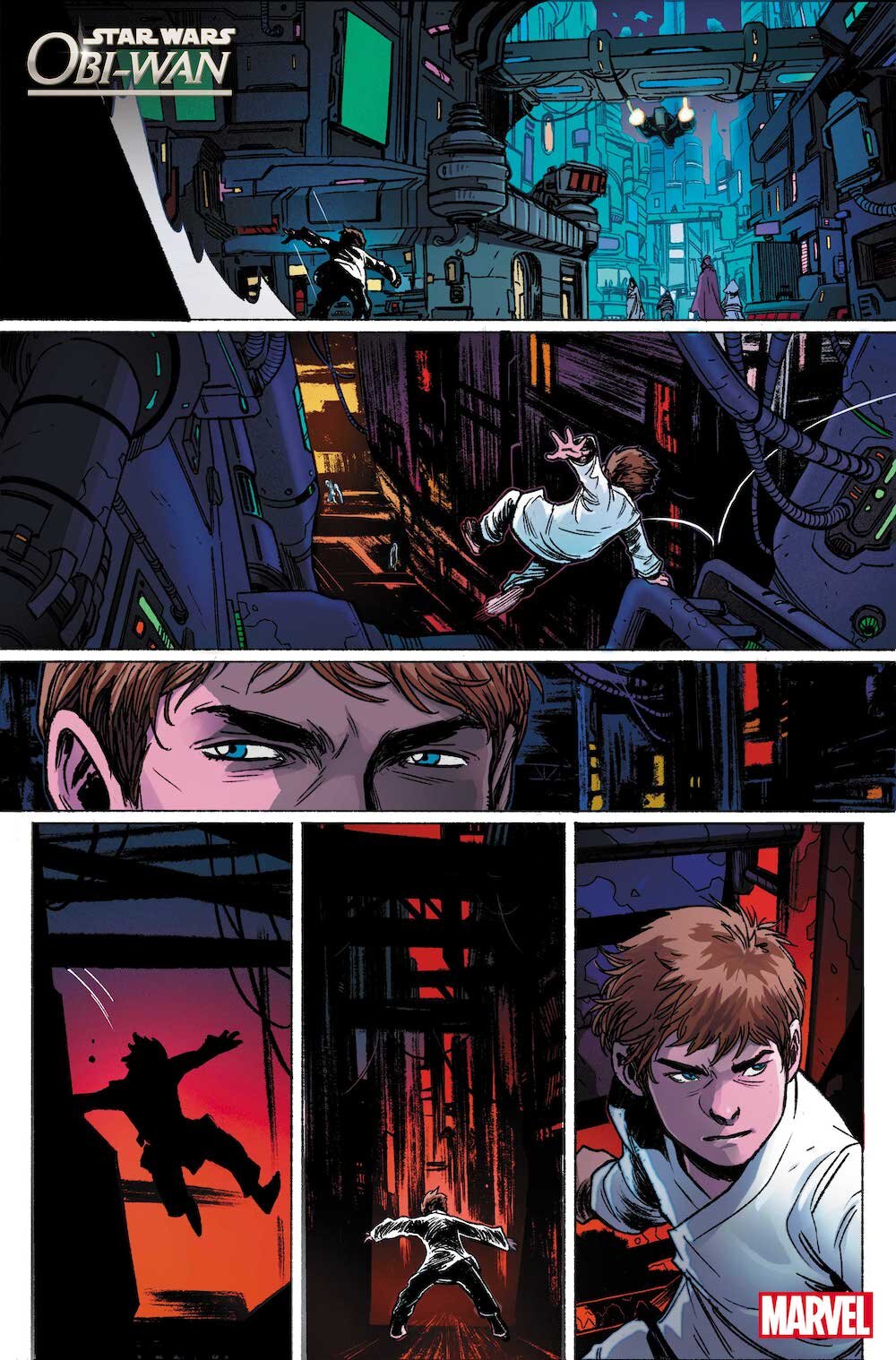 Issue #2 will tell a story from the early years of Obi-Wan’s time as Qui-Gon’s apprentice, and might even have a bit of horror sprinkled in:

We’re going to see Obi-Wan as a padawan, which means we’re going to see him with his master, Qui-Gon. But I think the story is unexpected. I mentioned Universal horror earlier… I tried to bring a good dose of that into Issue #2. 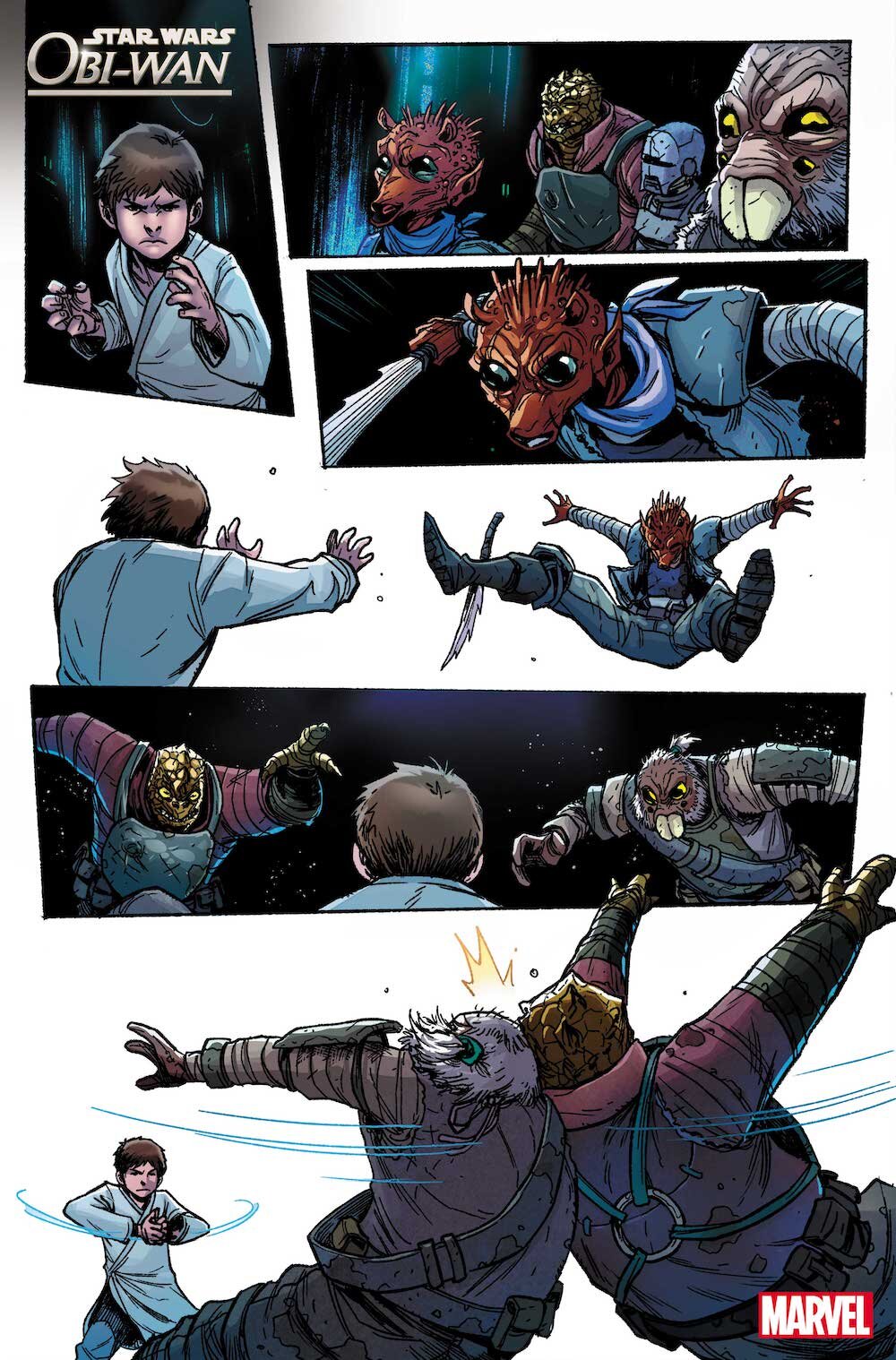 Cantwell also spoke a little about Obi-Wan in the Clone Wars:

We explore some intense moments of the Clone Wars that are new. I was always fascinated with that period ever since Leia mentions it offhandedly in her recording. To me, it had to be formative for him, considering how vast the conflict was, and how intense. It’s been explored really well already in newer work, but it was very interesting to tell stories from that era.

He’s also about my age in those stories, so I probably ended up bringing some of my own perspective into him in those issues—those times when you realize things are not as simple as they seemed when you were younger and are instead infinitely more complex. 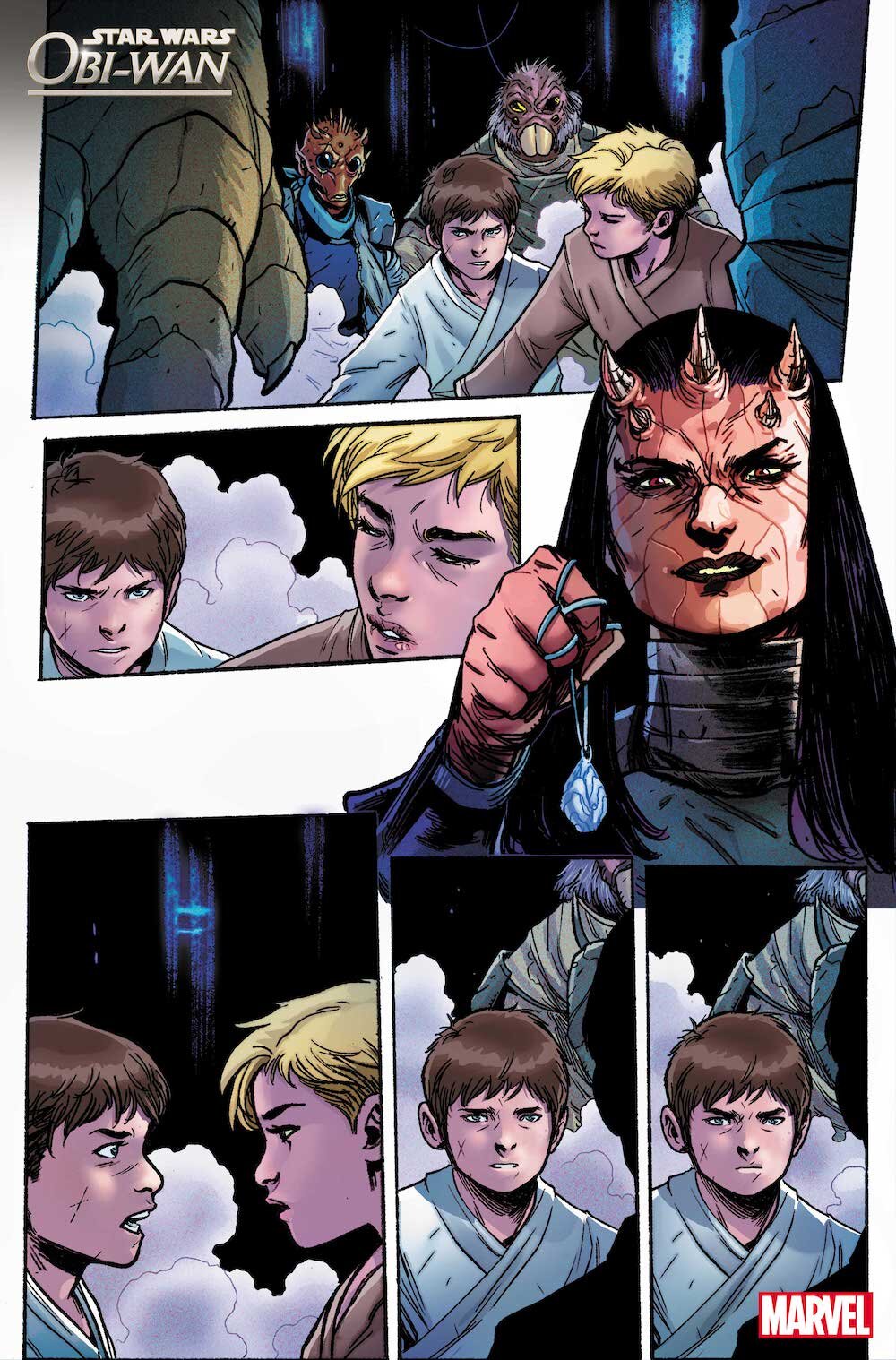 Cantwell also spoke about Ario Anindito, one of the rotating team of artists for Star Wars: Obi-Wan, who did the art for the first issue covering Obi-Wan as a youngling:

Ario is first and foremost a pro, and brought the series to life immediately with incredible detail. He also did an eight-year-old Obi-Wan that doesn’t have the advantage of being immediately recognizable as one of the two actors to play the character.

But his Obi-Wan is instantly just crystallized, and I bonded to him just as I have the other incarnations I’ve seen over the years. There are actually different artists for each issue, which is exciting, and they each bring their own unique voice to the different stories, which all fall in different eras, with different tones and genre elements.

Finally, Cantwell spoke about the challenges of working with a team of artists to make all these stories feel thematically consistent:

The characters and themes to me are what make Star Wars so enduring. Yes, it has an incredible amount of wonderful ephemera and accoutrement, and the ‘world’ of it is basically endless. But it’s the themes of Light vs. Dark, both within and without, that draw me in again and again. Classic heroes and their turmoils.

The tone is also extremely important. Sincere without being self-serious, charming without being glib. Star Wars has all the hallmarks of the most classic serial sci-fi and fantasy stories.

You kind of have to be true not just to what Lucas originally did (and all the subsequent work done by the collective of artists that followed) but also things from the 30’s, 40’s, and 50’s that he drew inspiration from. Buck Rogers, Flash Gordon, and the like. Even elements of Universal horror in there.

Star Wars: Obi-Wan debuts on May 4th, with issue 2 arriving in June. It certainly sounds like it’s going to be a fascinating read. 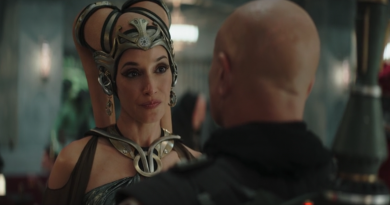 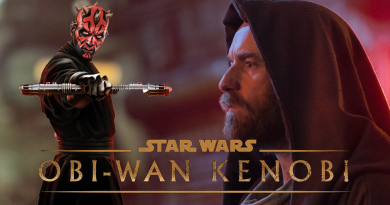 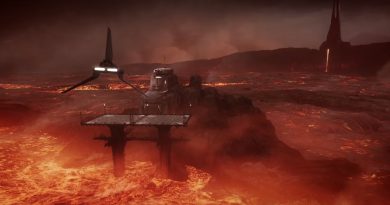