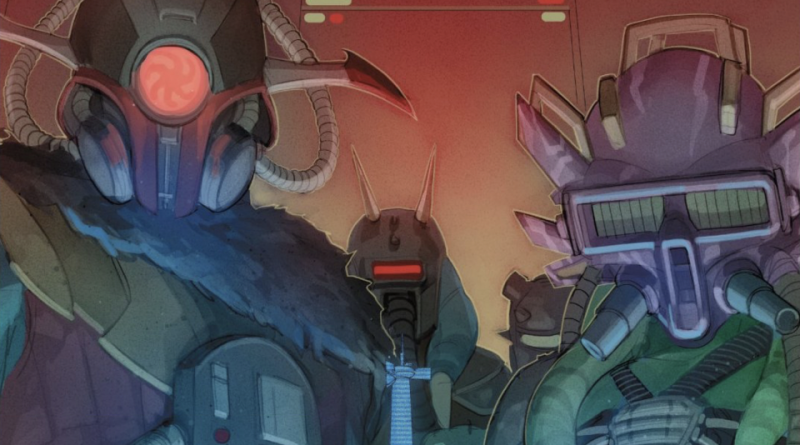 The end of this phase of The High Republic grows closer each day. Writer Cavan Scott certainly stands among one of its most generous contributors, and he’s holding nothing back while wrapping up this titular Marvel series. The fourteenth issue brings us right into the events of Claudia Gray’s The Fallen Star. Avar, Keeve, and Sskeer are at the end of their hunt for Lourna Dee and her contingent of the Nihil. Though their small victory is in sight, the Nihil’s most devastating attack against the Jedi has only begun. SPOILERS AHEAD…. 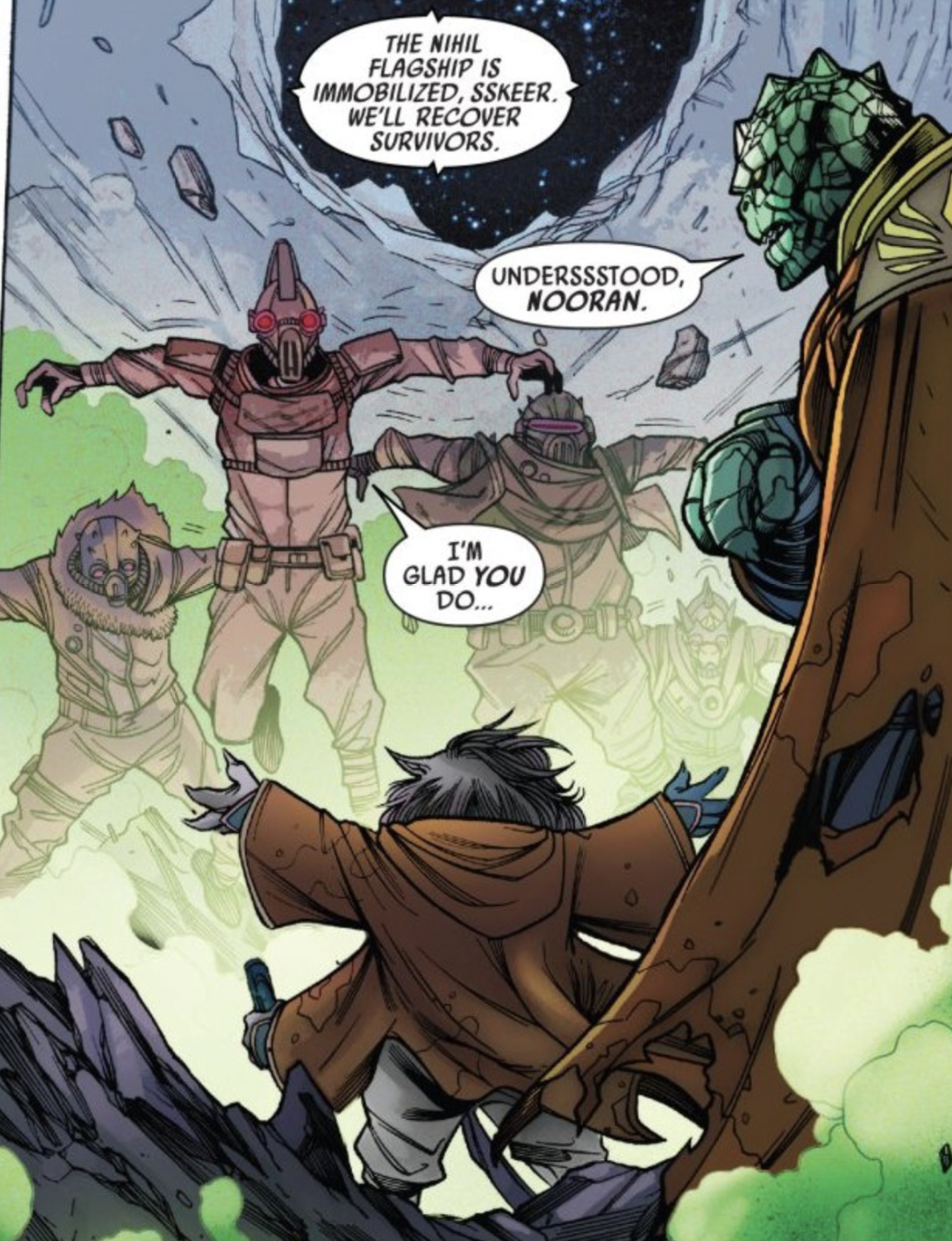 As the Jedi finish rounding up the Nihil in no-space, the marauders are baffled when two masters spare them. The Jedi do whatever they can, putting themselves at risk, to ensure the Nihil they seek aren’t sucked out into the vacuum. Despite everything the Nihil are capable of and the violence they’ve inflicted on the galaxy, the Jedi of this era still protect life. Scott fills this issue with the light which kicked off The High Republic before plunging us into the violence inevitably awaiting. On a side note, if you haven’t read Claudia Gray’s The Fallen Star, there are massive spoilers in this issue, so just beware if you wanted to go into that story fresh.

The fight to protect life also takes an unexpected twist, as Keeve Trennis puts herself between Lourna Dee and Avar Kriss. At the conclusion of the previous issue, Kriss believed Lourna Dee was too dangerous to be kept alive. Remember, the Jedi don’t know Marchion Ro is The Eye of the Nihil, so Avar believes Lourna Dee has engineered all the dreadful attacks on the Republic and the Jedi. Thanks to Keeve’s bravery and commitment through justice, Avar realizes the path she was about to go down. Keeve is one of the truest Jedi we’ve met in Star Wars, and Scott continues to show her quality, especially when most people would’ve allowed Lourna to be cut down for her crimes.

After a close call with Lourna, Avar is back on the bridge as they make their way back to Starlight Beacon. She can sense all is not right in the galaxy, especially on her own ship. As we know, the Nihil are in the midst of hatching their most sinister plot against the Jedi. The art by Ario Anindito in this issue does an excellent job of conveying the state of the Jedi and the galaxy. Avar’s usually presented in a bright, angelic demeanor. Here, we get a closer look, and she’s carrying the scars of the galaxy, both inside and out. 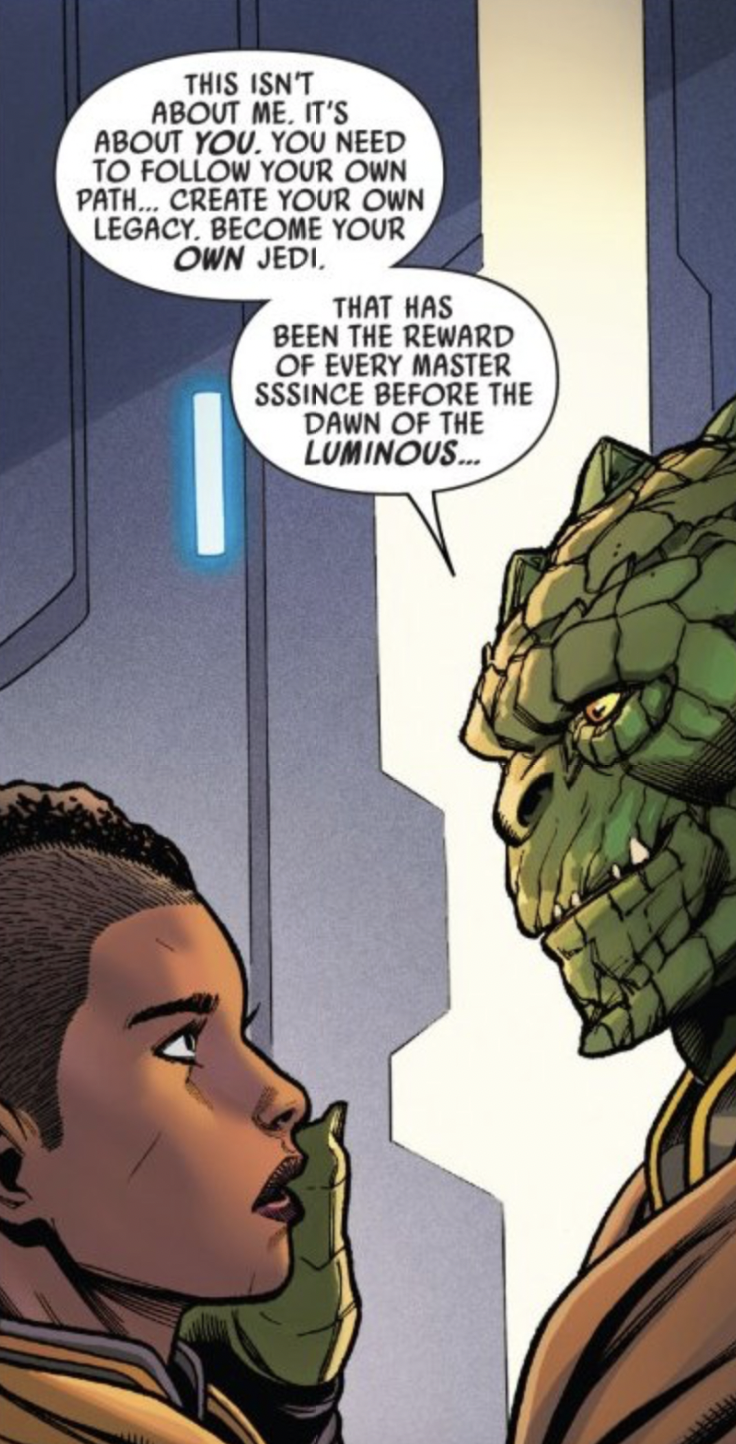 Sskeer’s condition continues to deteriorate, the Magrak syndrome taking its toll, and the Jedi Master realizes this will be his last mission. Keeve pledges to honor his legacy, but Sskeer reminds her that’s not what his tutelage was about. This is one of the best moments between teacher and student in The High Republic… heck, maybe even Star Wars. Clearly, Sskeer’s spoken with Yoda, who passed on a similar sentiment to Luke in The Last Jedi. Paying your knowledge forward is the reward you get, not putting someone in your debt for it. It’s a very hopeful moment of good before we plunge into the nightmare at Starlight Beacon. 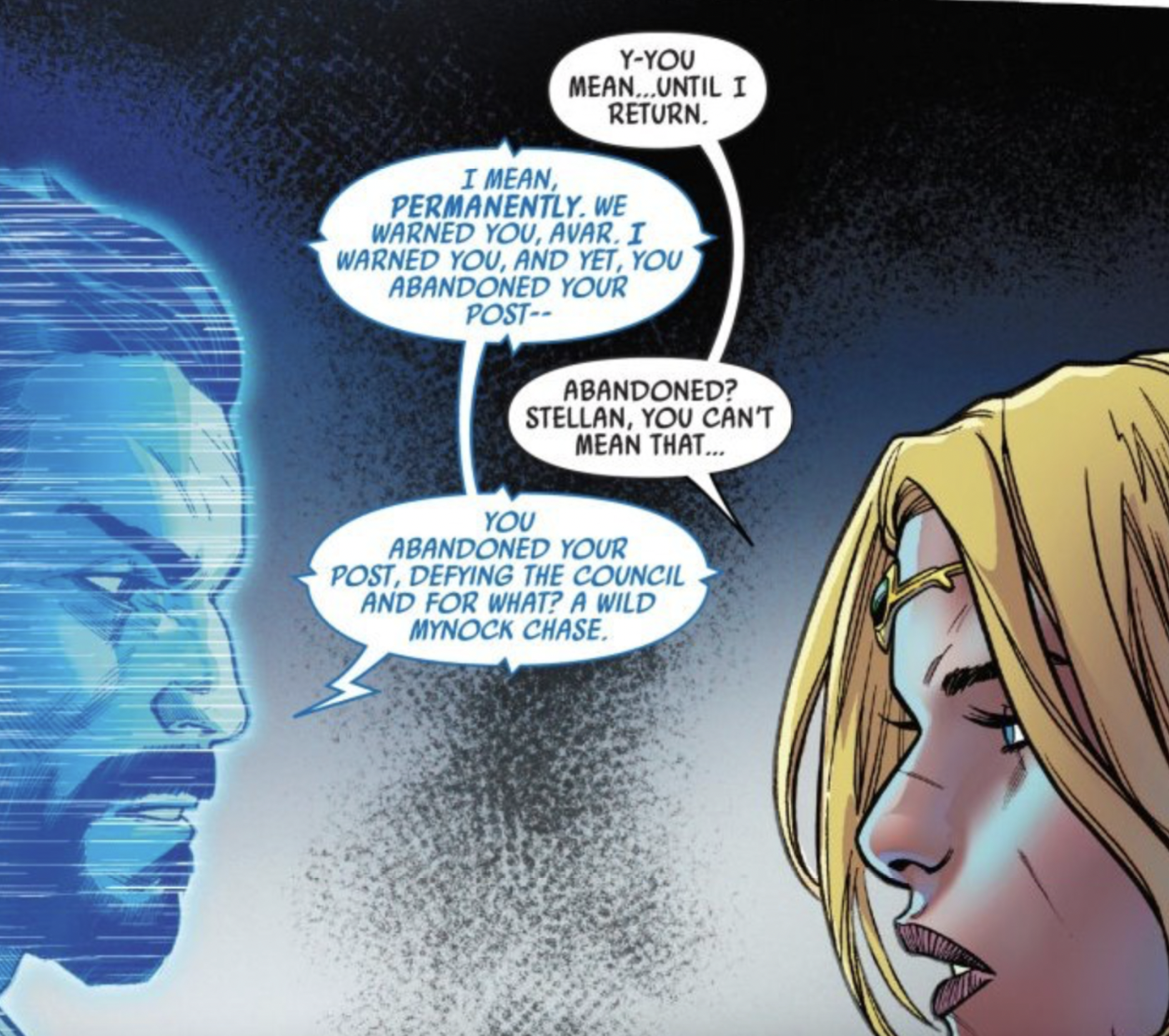 The Jedi arrive at Starlight Beacon, but Avar receives some bad news. Stellan isn’t happy and considers her derelict in her duties to Starlight Beacon. He’s taken over the marshal post of Starlight Beacon. This scene is lifted straight from The Fallen Star by Claudia Gray, only here we see Avar’s point of view, which is abruptly cut off in the novel. We didn’t know she’d captured Lourna Dee, and just as she’s about to tell Stellan, we see why their transmission is cut. 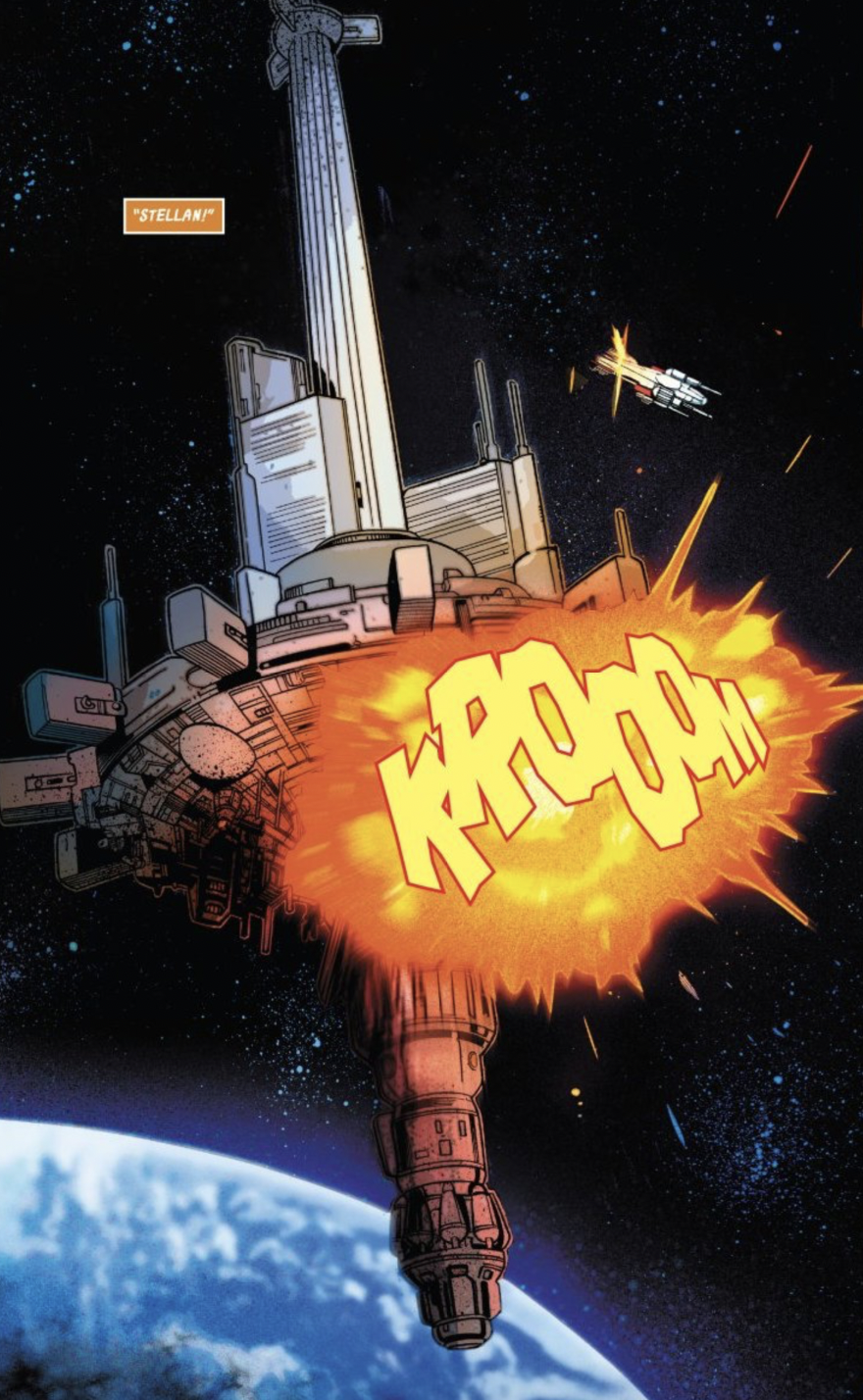 The destruction of Starlight Beacon begins! The Jedi quickly think of how they can help and locate a stable docking ring. Everyone gathers, and Avar must cut through the blast doors, since all the power in the station is out. 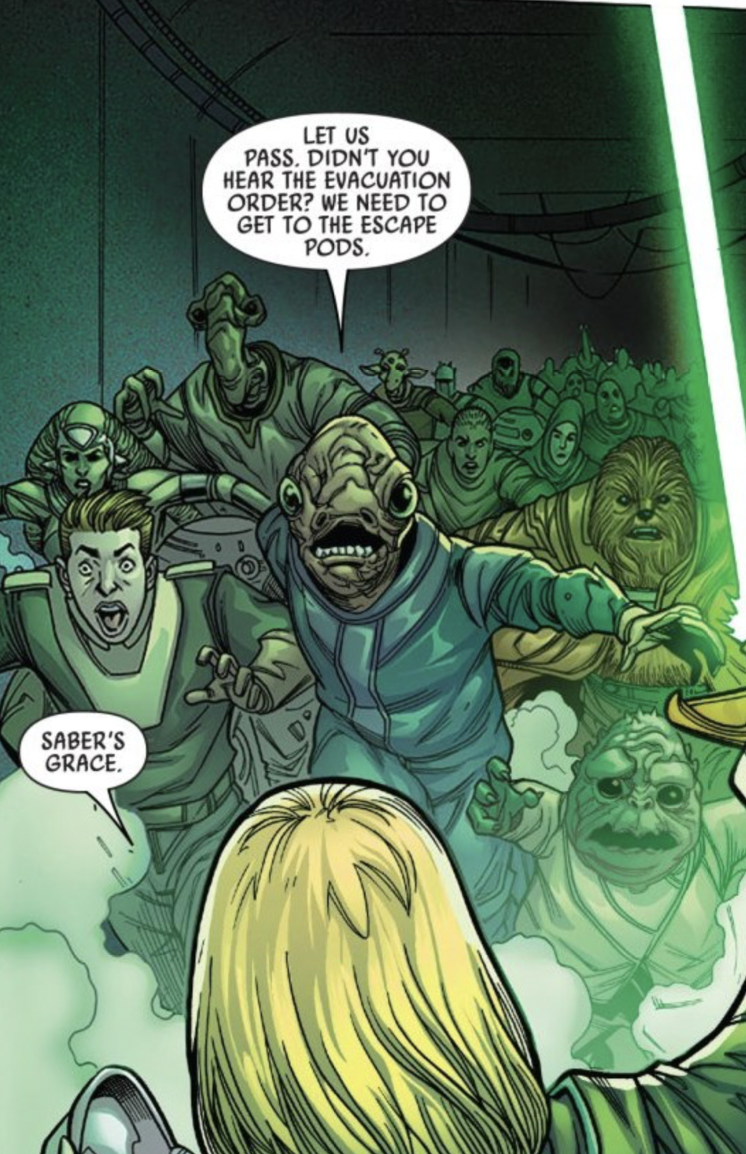 Those trapped aboard the station are desperate to escape. The Jedi try to keep it calm, but chaos overwhelms everyone quickly. And… there’s something else.

The Leveler! It’s in Starlight Beacon and has diluted the Jedi’s ability to use the Force while terrorizing their minds. As the Jedi can’t tell what’s real and what’s not, they begin to turn on each other. The issue ends with Avar, lightsaber raised, against Keeve and Sskeer. The conclusion of this series is going to be wild! 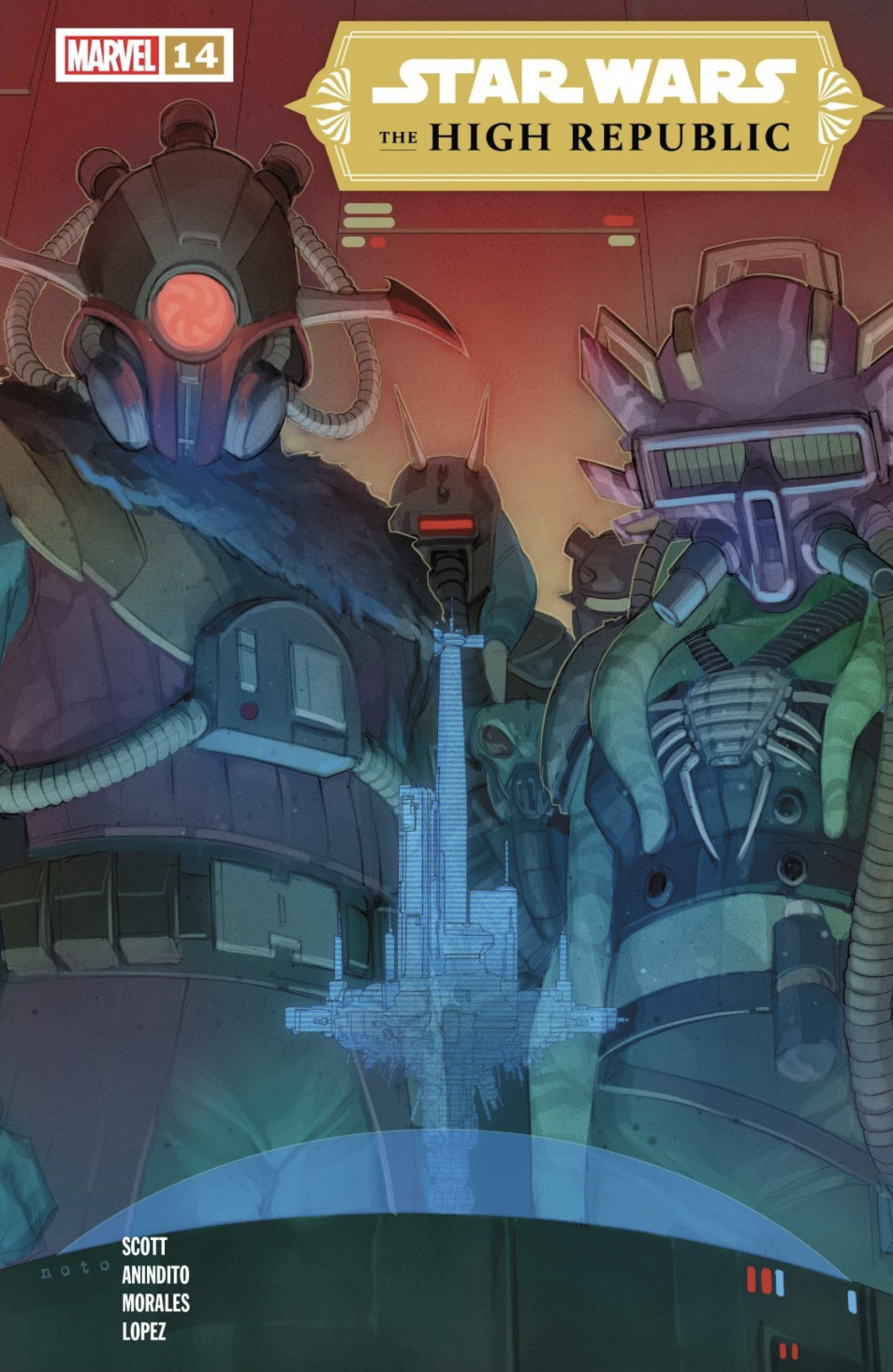 I have complete faith Scott planned this story out from beginning to end, and we are on our way to a satisfying conclusion. His regard for these characters, especially Trennis, always comes through in his writing. It’s so exciting to see the events of The Fallen Star come to life through the art of Ario Anindito. The hope these characters shine through the tension and evil they continue to confront shows the fortitude I’ve come to admire in the Jedi of The High Republic. While this may be the end of the line for some of them, considering no one is safe with Cavan Scott, I feel those sacrifices won’t be meaningless. This continues to be one of the best Star Wars comics around, and I can’t wait to see what the conclusion brings. 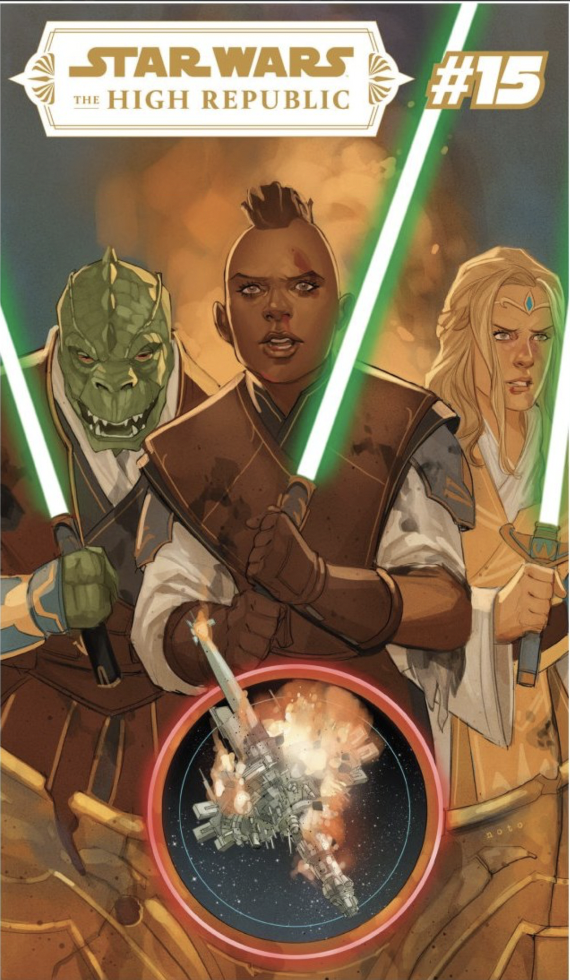 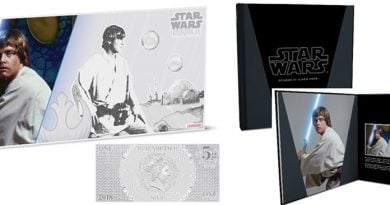 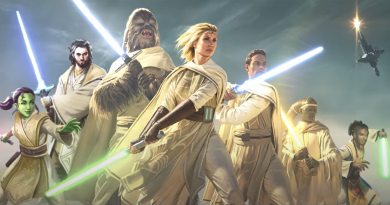