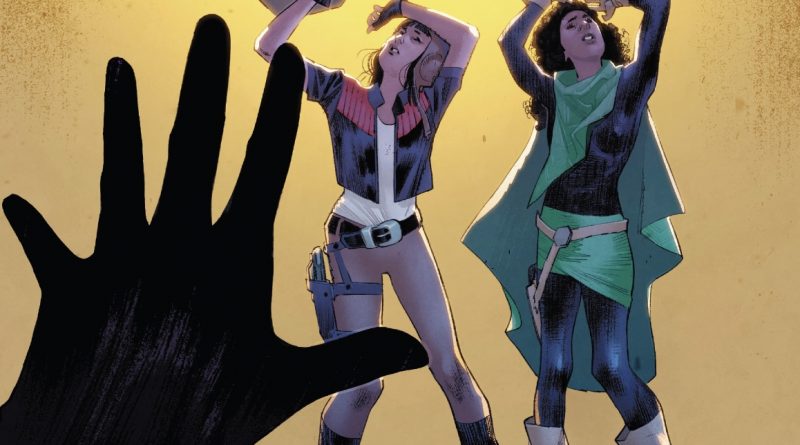 As Crimson Dawn wages a secret war on the Sith, Aphra and Sana continue their roles in it, yet remain in the dark about what those are. Assassin Just Lucky and his former lover, Ariole, have unfinished business with the cruel Ronen Tagge, once believed dead. It seems everyone works for the Tagges, eventually. As Kho Phon Farrus returns, an old friend and flame of Aphra’s, the hunt to uncover a dark side relic too powerful for even the Sith kicks into full speed. SPOILERS AHEAD…. 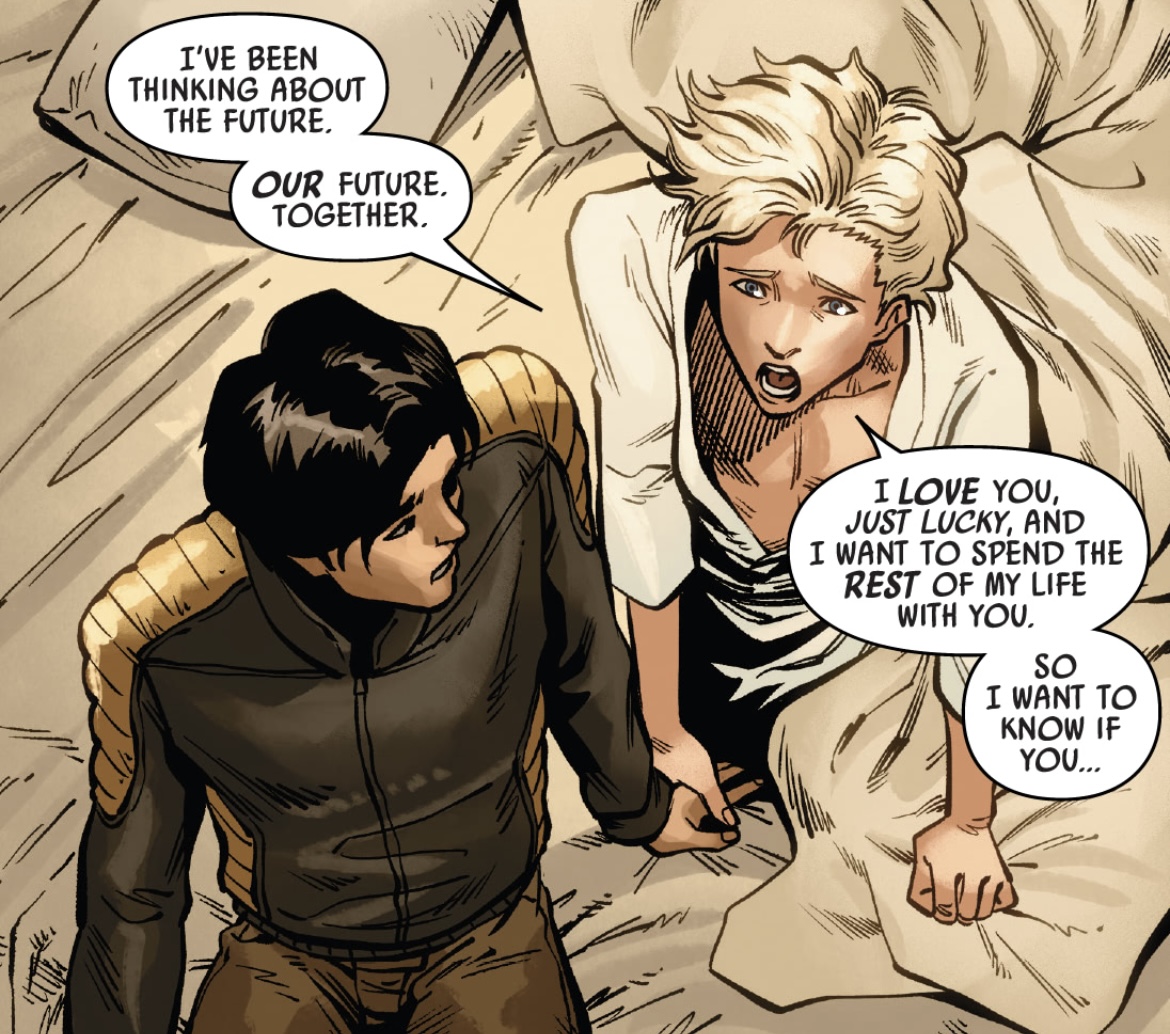 So far, the past romance between Just Lucky and Ariole has only been mentioned. Writer Alyssa Wong opens this issue with a few touching frames, showing us they were very much in love and planning for a future together. It also gives context to how much contempt Ariole has for Lucky, who left him without any explanation. When we rejoin Lucky in present day, we learn he still carries the Ring of Vaale with him (for more context, read my review of Doctor Aphra #5). Lucky learns Ronen Tagge is looking for him, and will use the ring to lure the crooked aristocrat into a scheme, hoping to rob him.

Aphra and Sana have been hot on Kho’s trail, but keep missing them. They’ve scoured all their contacts and resources, but still can’t catch Kho. Sana finally realizes they’re a former classmate of her and Aphra. Kho’s left a trail of bodies behind them, with the murders becoming more gruesome and ritualistic. 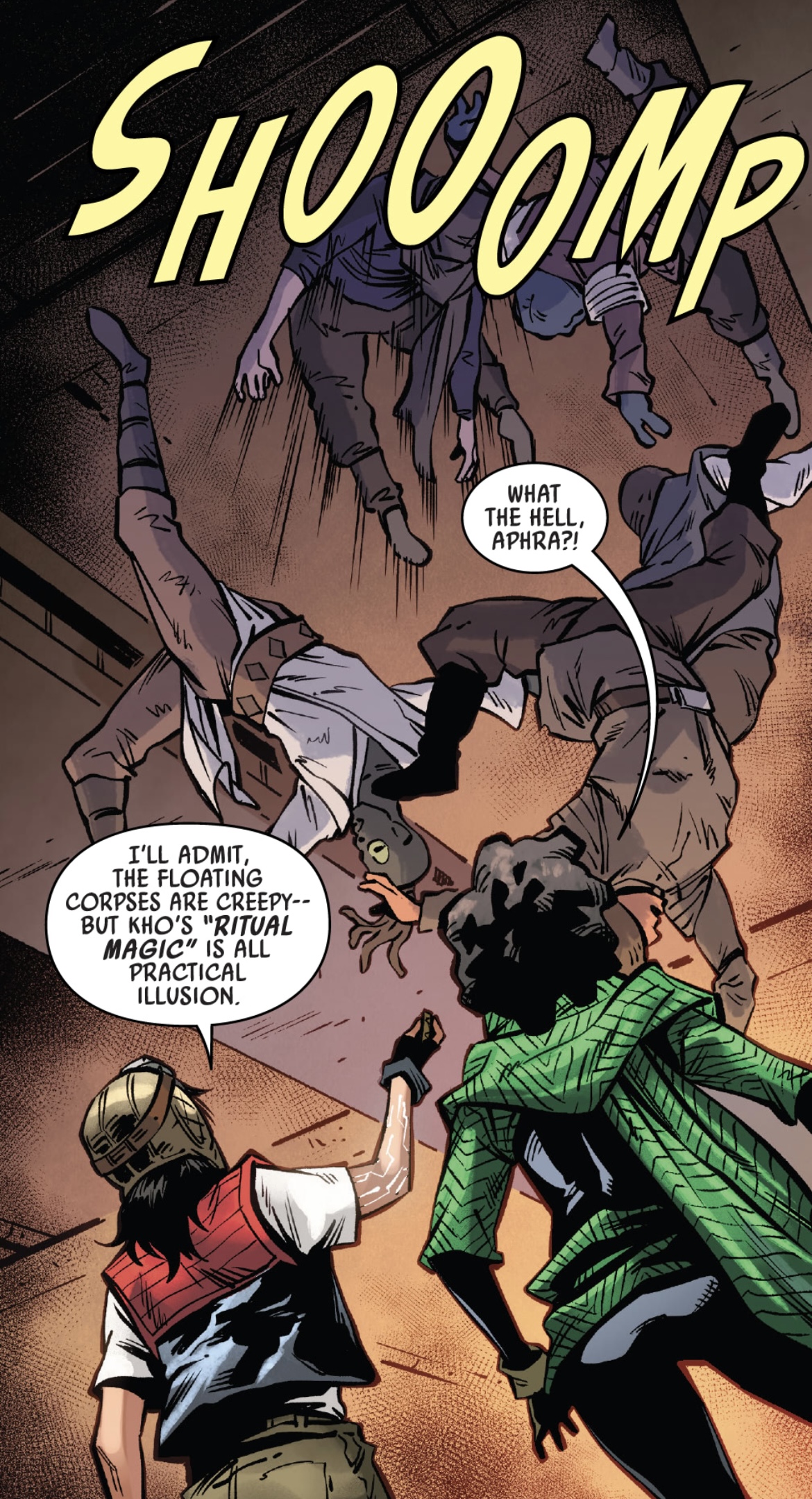 Aphra discovers Kho’s secret: they’ve been using “magic” tricks to make these murders appear connected to the Ascendant. Kho is obsessed with becoming a Force user and is already playing the role on their path to attaining the dark power of the Ascendant. Aware of Kho’s obsession with the Force, Aphra decides to set a trap of her own for their former classmate. She and Sana will need an unlikely ally to help them… 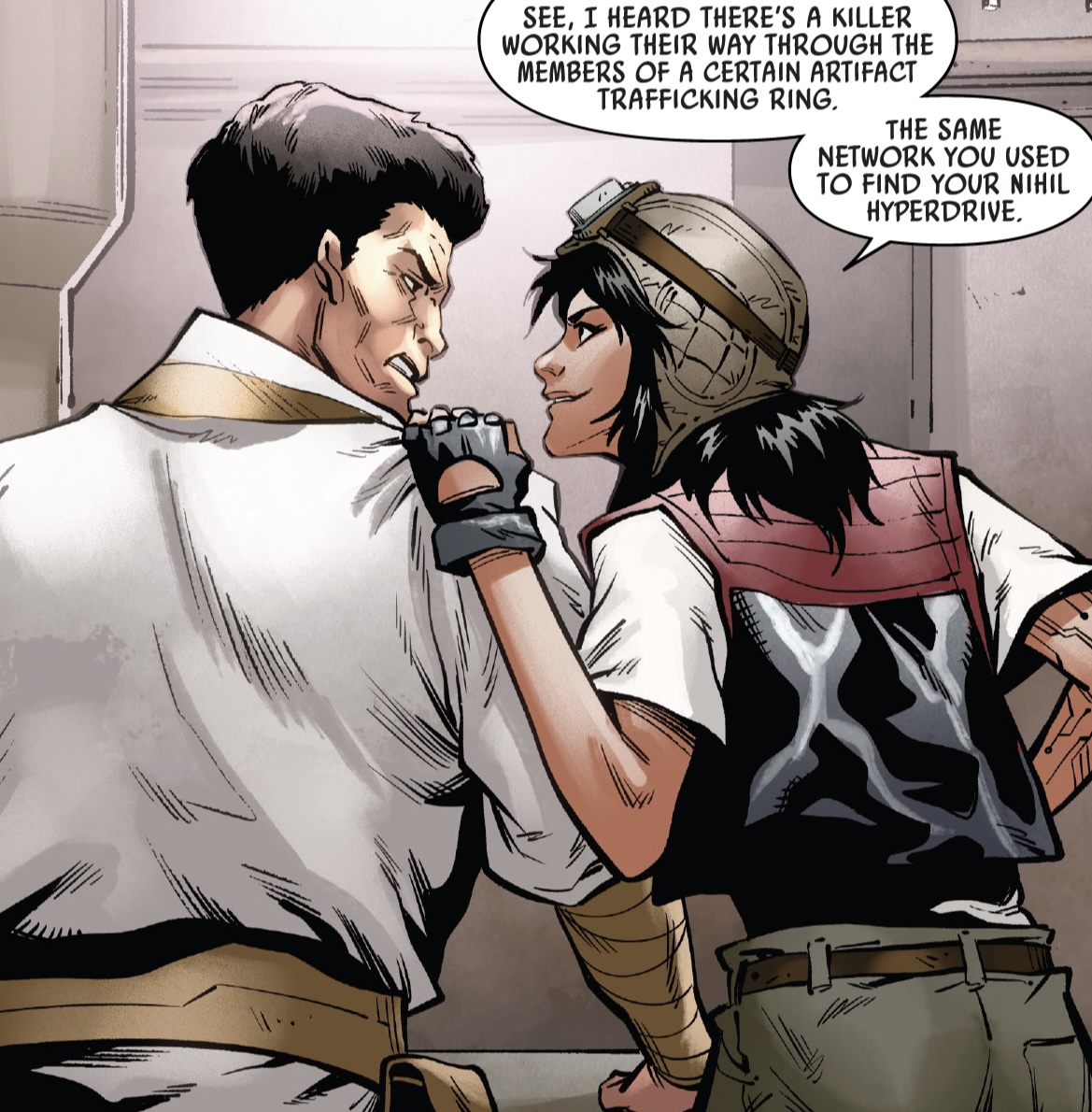 Remember the old Tagge rival, Beol De’Rruyet? You know, the Elon Musk of the galaxy far, far away who promised to bring a Nihil path engine to modern ships only to be revealed a fraud. Well, times have been tough for Beol since his company went under. Aphra and Sana inform Beol he’s likely the next target of Kho. Beol used the same network of artifact dealers to find the defunct path engine, and he has some things Kho wants. Aphra and Sana offer their protection so they can lure Kho in. 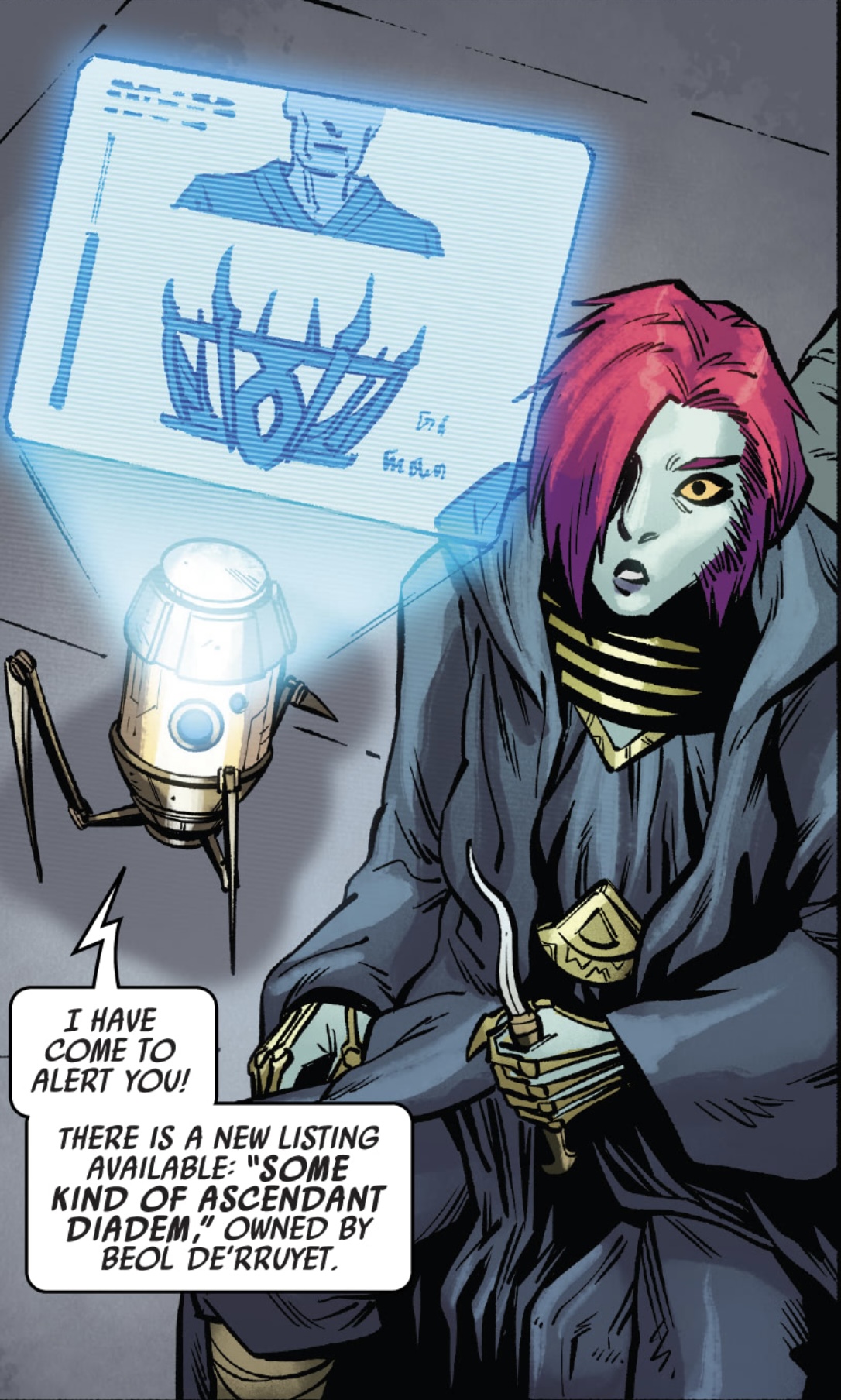 It doesn’t take long for Kho to get word of the artifact. I have a feeling Alyssa Wong is dropping a lot of breadcrumbs for future High Republic stories. This is a bit of an aside, but with the next phase of High Republic jumping back 150 years, I have a feeling we’ll learn much more about these Ascendant artifacts soon. They sound an awful lot like some of the weapons Marchion Ro’s unleashed. Kho appears to be our guide, and they jump on the tip of this Ascendant diadem in Beol De’Rruyet’s possession.

Kho is also a former love of Aphra who feels scorned, so there aren’t just blaster bolts exchanges when they hatch the trap. Kho uses their magnetic enhancements to bury Aphra, Sana, and Beol under a pile of cargo containers. As Kho orates ancient verses of the Ascendant, Aphra remembers something from their days at the University of Bar’leth. Instead of finishing them off, Kho seems to have an epiphany of their own and departs for the Tomb of the Eternal Spark – the place they’ve been searching for all along.

Aphra has an epiphany of her own. The tomb is at their old school, the University of Bar’leth. It looks like that’s where everyone will reunite, while we see Lucky arrive to meet Ronen Tagge, with the Ring of Vaale in hand. A good, old-fashioned cliffhanger concludes the issue. 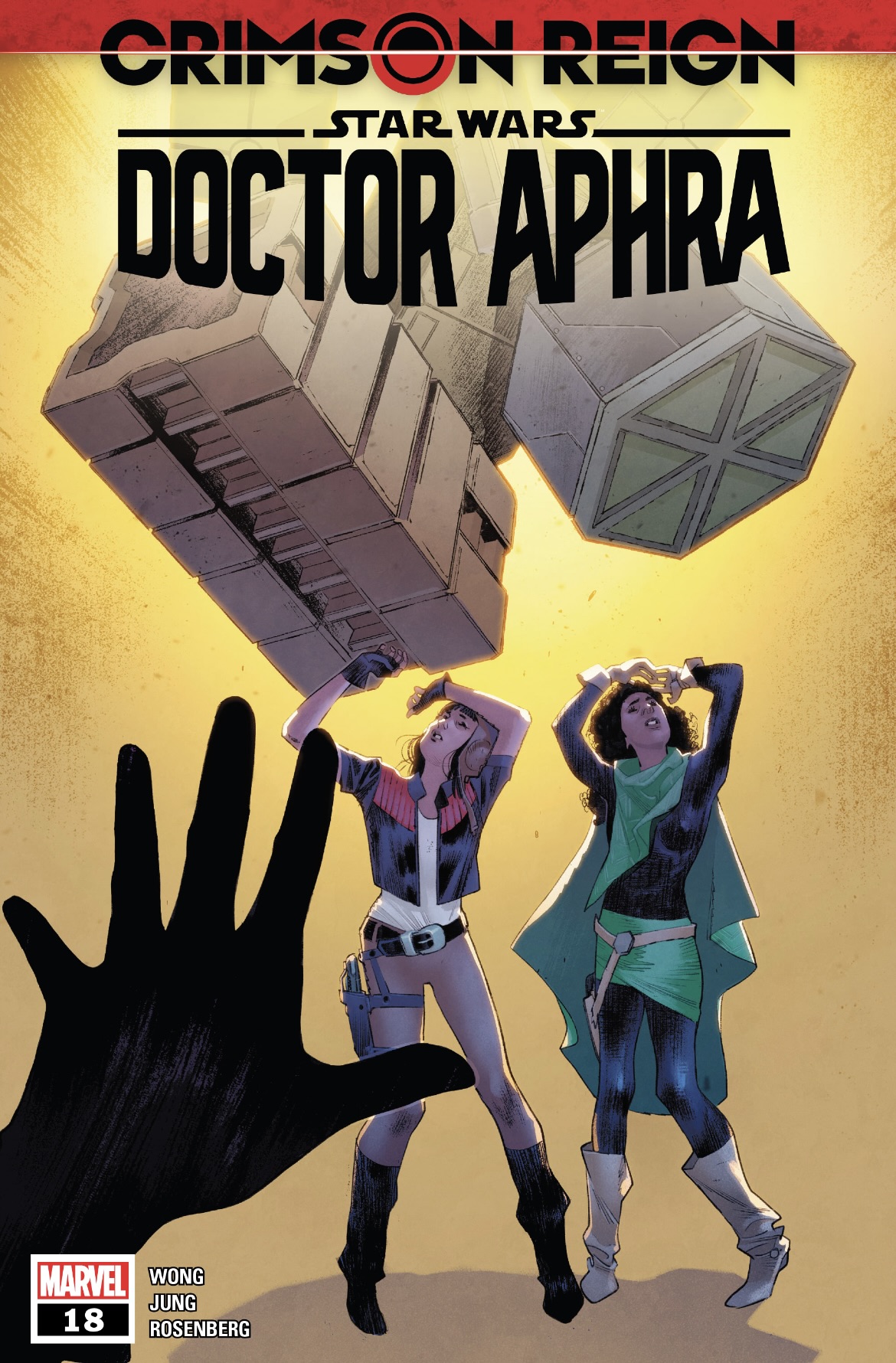 While there are some enjoyable moments here, this issue spent too much time jumping around. While I understand it has to lay some connections for what promises to be a big showdown at the University of Bar’leth, I felt the writing packed a bit too much. It’s not a bad issue by any stretch, just a little clunky. The art by Minkyu Jung is still fantastic as ever. Assuming there are some hints of High Republic with the Ascendant, I hope we get some solid answers to a lot of the questions raised in the past two issues. The story of what happened between Kho and Aphra needs to be told, and judging by the cover of the next issue, we’re getting a bit more insight. Until then, I’ll assume Kho and Sana will have a lot to talk about if they get the chance to do so. 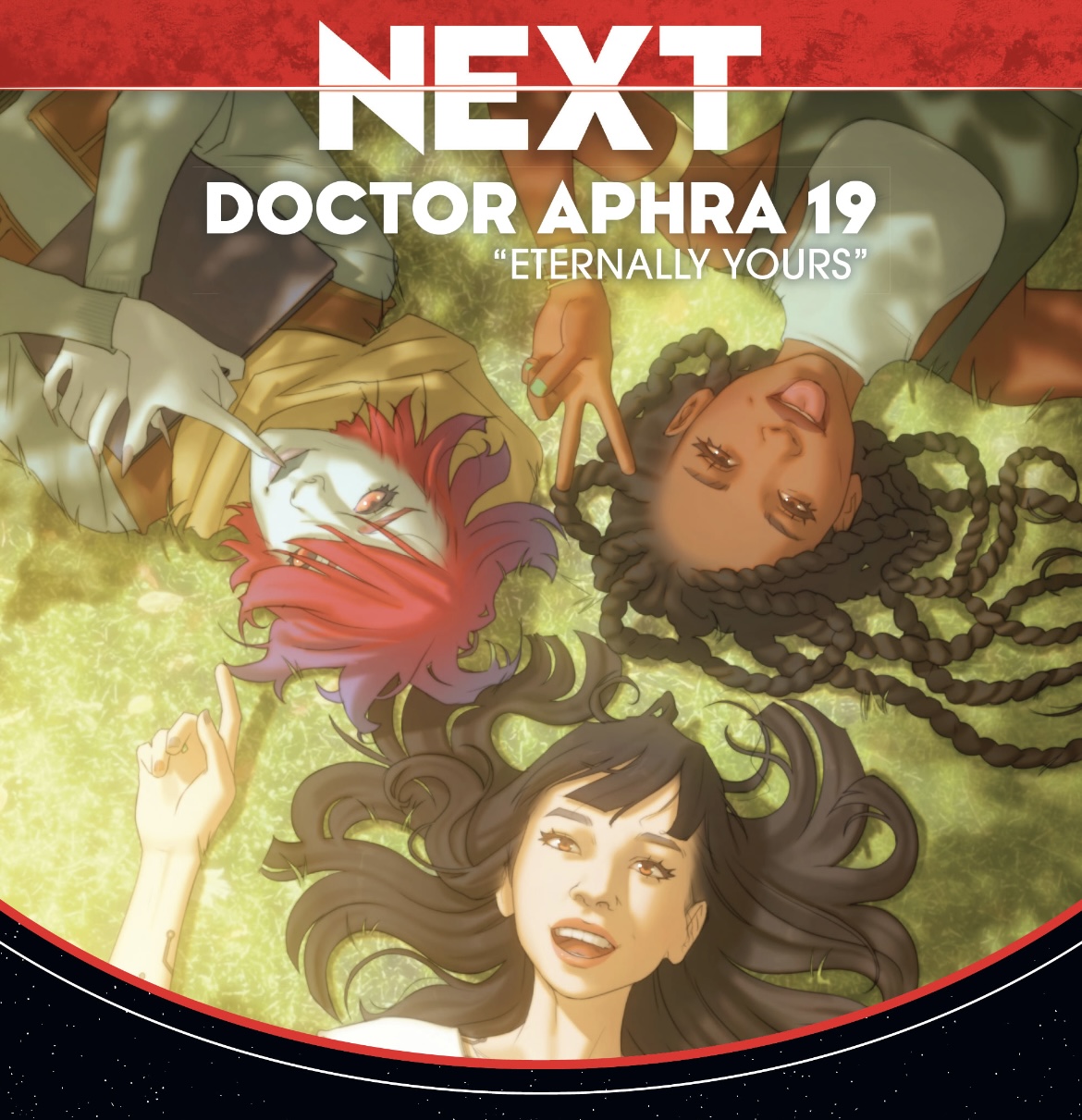 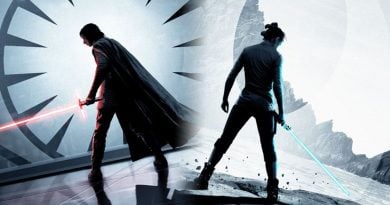 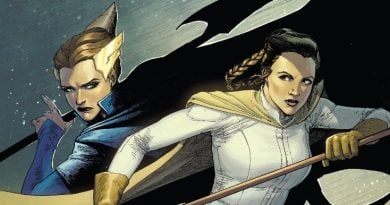 Review: The Dream Is Saved In Marvel’s Star Wars #43 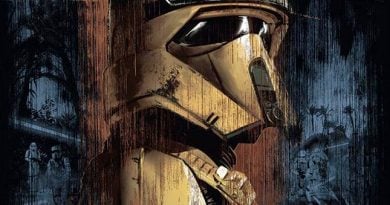