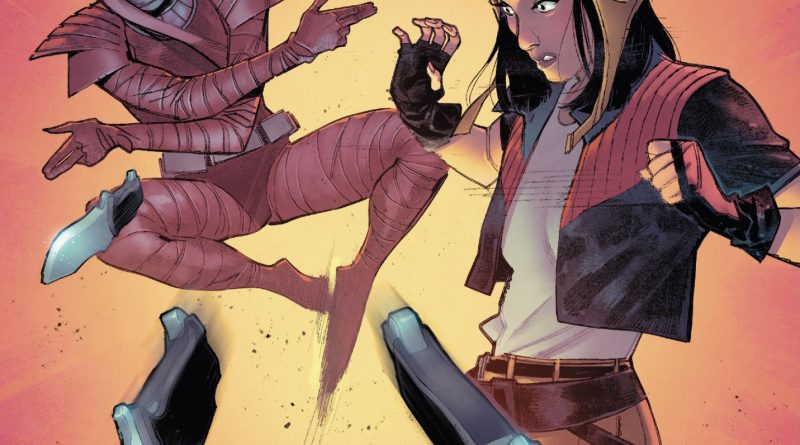 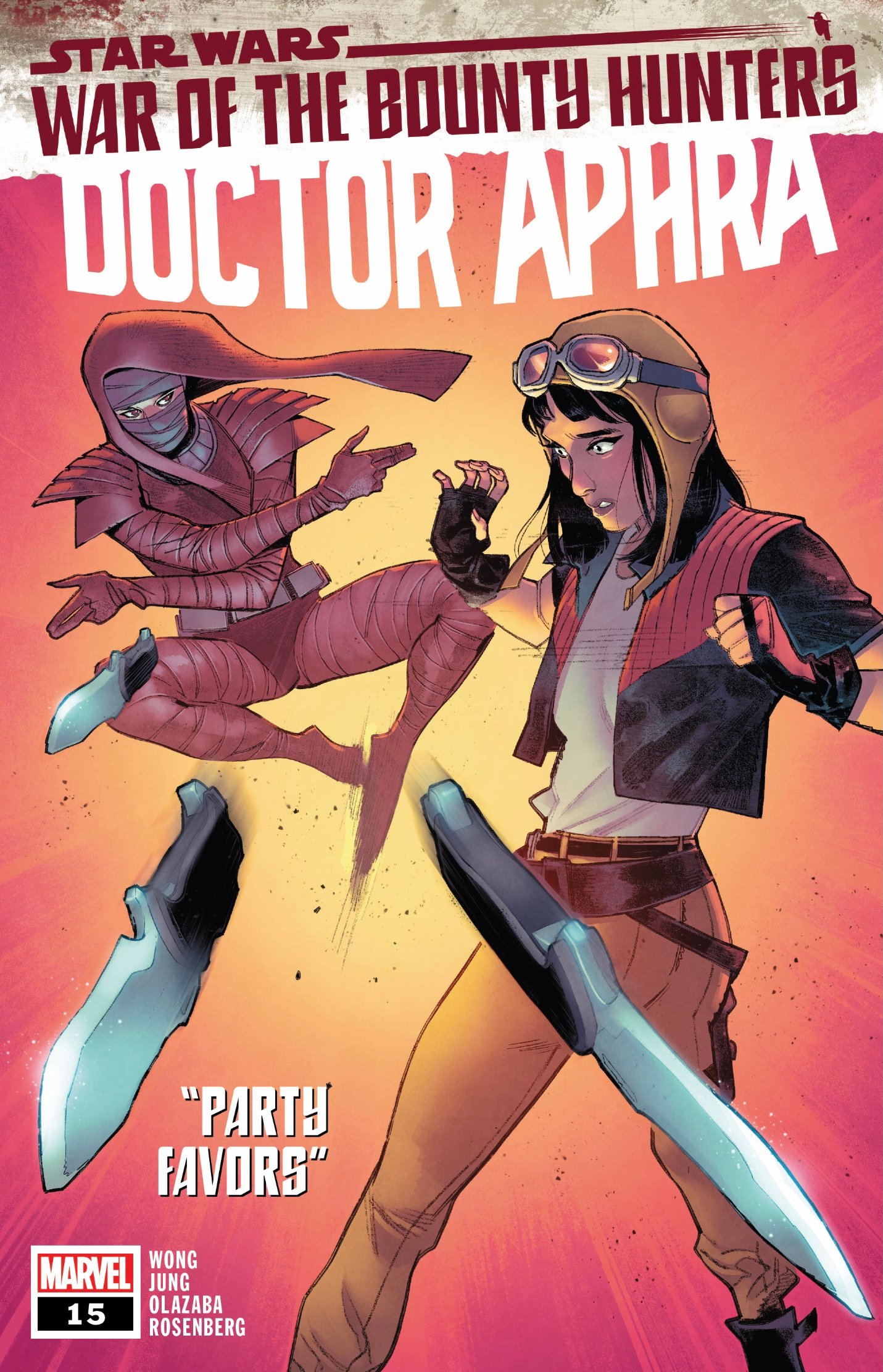 Aphra, Sana, Just Lucky, and Ariole find themselves in an explosive conclusion to War of the Bounty Hunters. In the archives of Crimson Dawn’s flagship, Aphra seeks reconnaissance on behalf of Domina Tagge, but finds much more than she bargained for. We rejoin this quartet of troubled lovers and assassins just as the most deadly assassin herself, Deathstick, traps them. In typical profession, Aphra doesn’t realize even greater dangers lurk beyond those in front of her. SPOILERS AHEAD…. 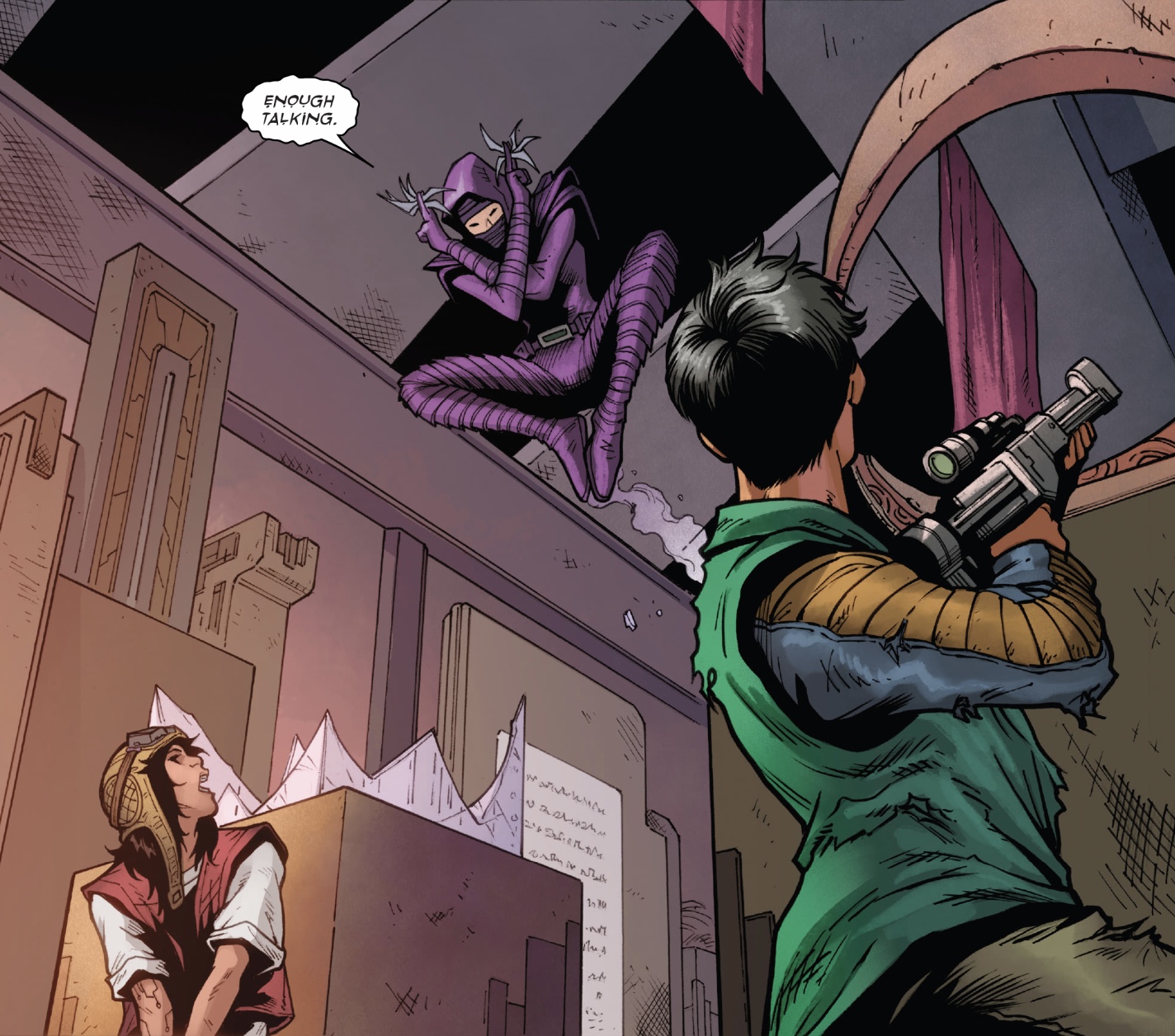 We finally got a name for this assassin… Deathstick! I love it. Their blades are coated in Dathmorian poison, killing victims in less than ten minutes. As Aphra and Lucky attempt to handle Deathstick, they realize it will take more than just the two of them. Deathstick eventually corners Aphra, putting a blade to her throat, but Sana and Ariole shower the assassin with blaster bolts just in time. Though they don’t hit Deathstick, the assassin is temporarily vanquished. There’s little time for anyone to catch their breath, as a group of Crimson Dawn foot soldiers appears in the archive. 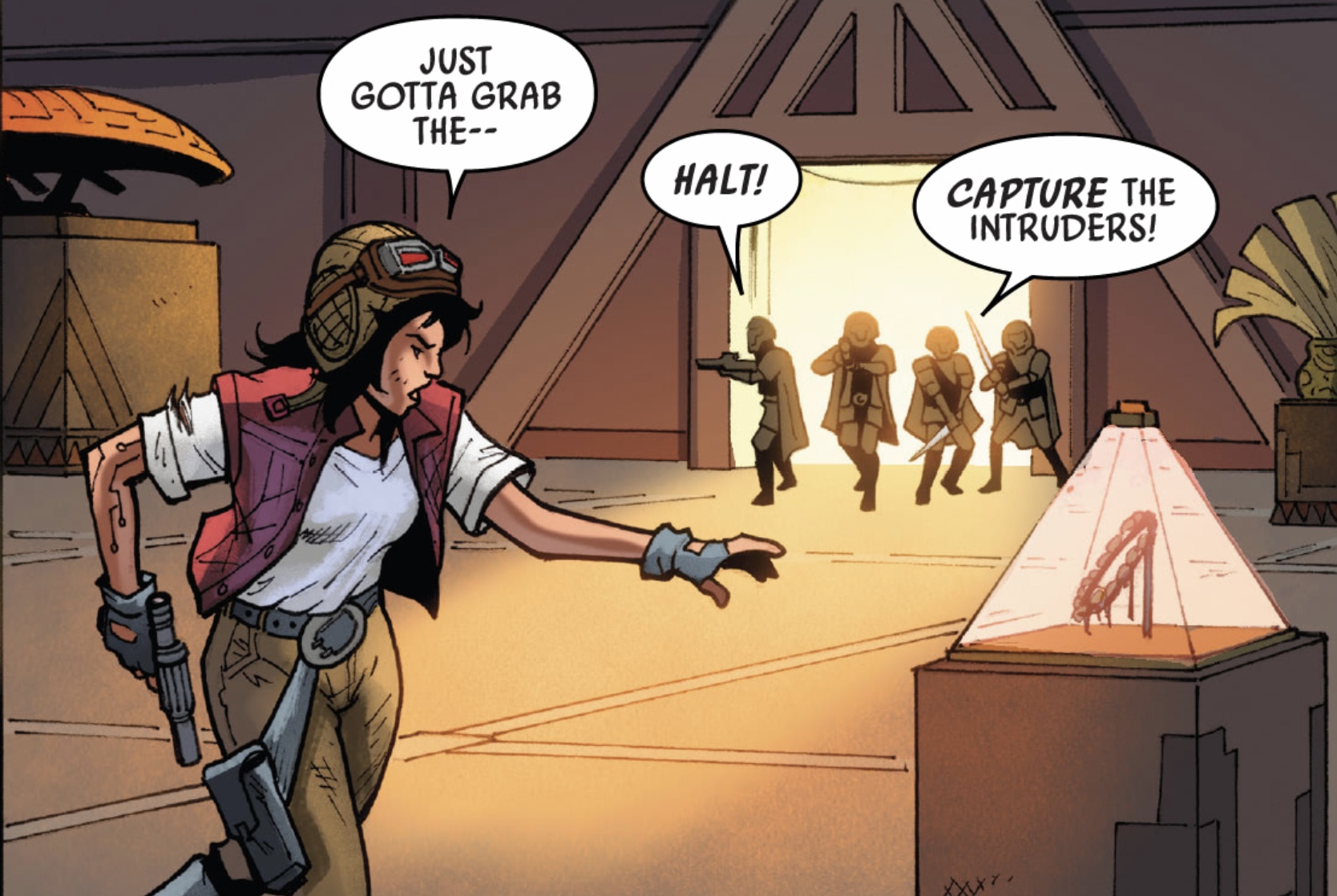 Aphra knows she and Sana’s life depend on reclaiming the necklace with data chips for Domina Tagge. Braving the crossfire, she rushes for it, but is then forced to take shelter behind a different display podium. Something else catches Aphra’s eye: a Thought Dowser from something called the Ascendant. Apparently, the Ascendant used technology and methods so dark even the Sith wouldn’t touch them. Aphra is drawn to the Thought Dowser, knowing if she can harness it, she can vanquish everyone threatening them. 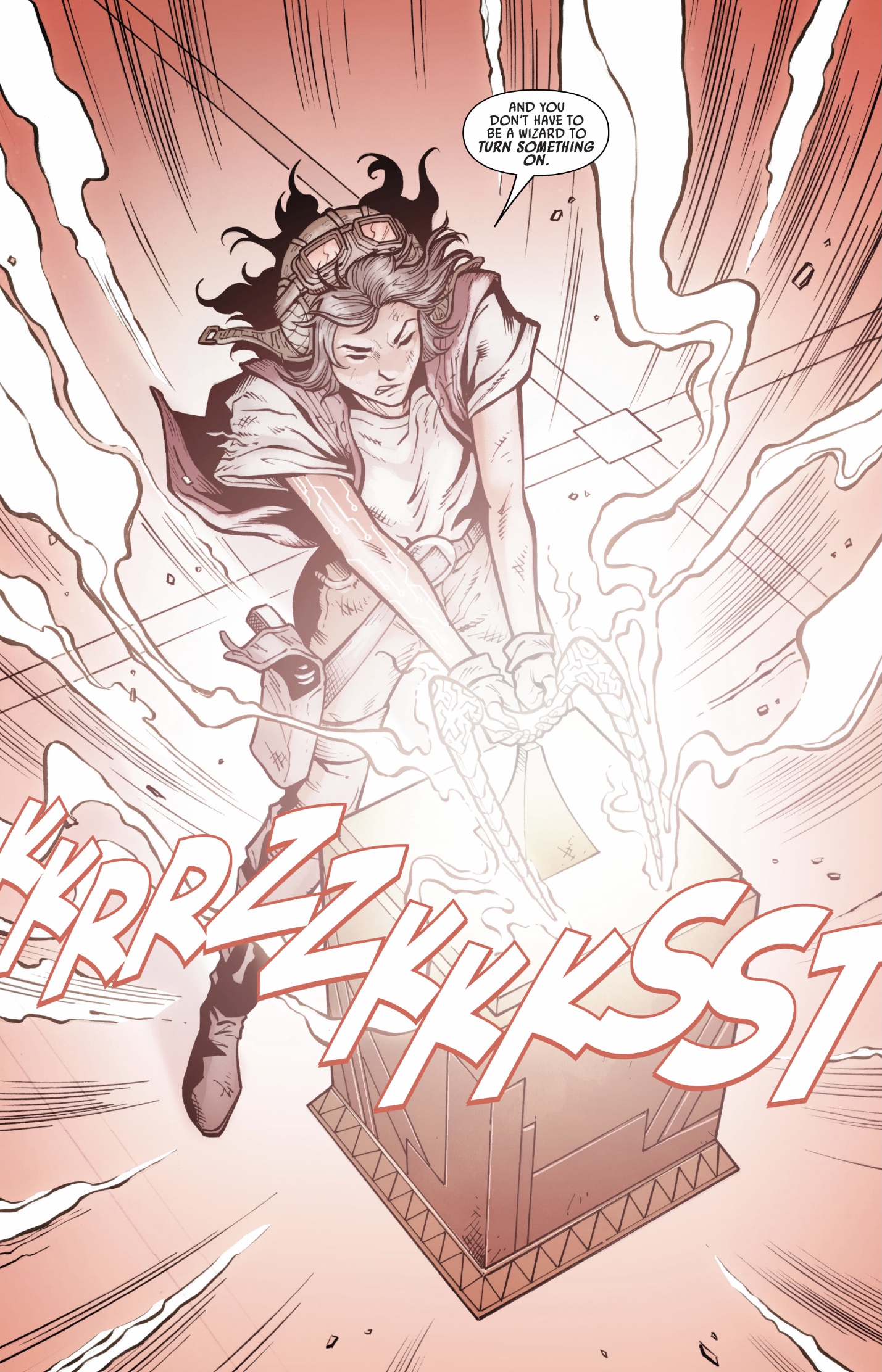 Aphra gets a bit more than she bargained for in this brilliant visual from artists Minkyu Jung, Victor Olazaba, and Rachelle Rosenberg. Aphra isn’t Force-sensitive (that we know of), but she is able to tap into the Thought Dowser with the cybernetic implants of her arm. Quickly, dark impulses overcome Aphra, allowing her to tap into the minds of their assailants and turn their weapons against them. Deathstick turns the poison blades on themself.

This god-mode Aphra is something to behold, but things quickly take a dark turn. She isn’t just disarming the assassin and Crimson Dawn guards, she’s sadistically hurting them, not something we usually see from the doctor. When Sana tries to intervene, Aphra can’t stop and feels the malevolent power of the artifact creeping into her mind, making wicked demands of her. She’s able to fight back and, in a surge of energy, drops the evil artifact. Though using it proved effective, the cost may be higher than Aphra contemplated. 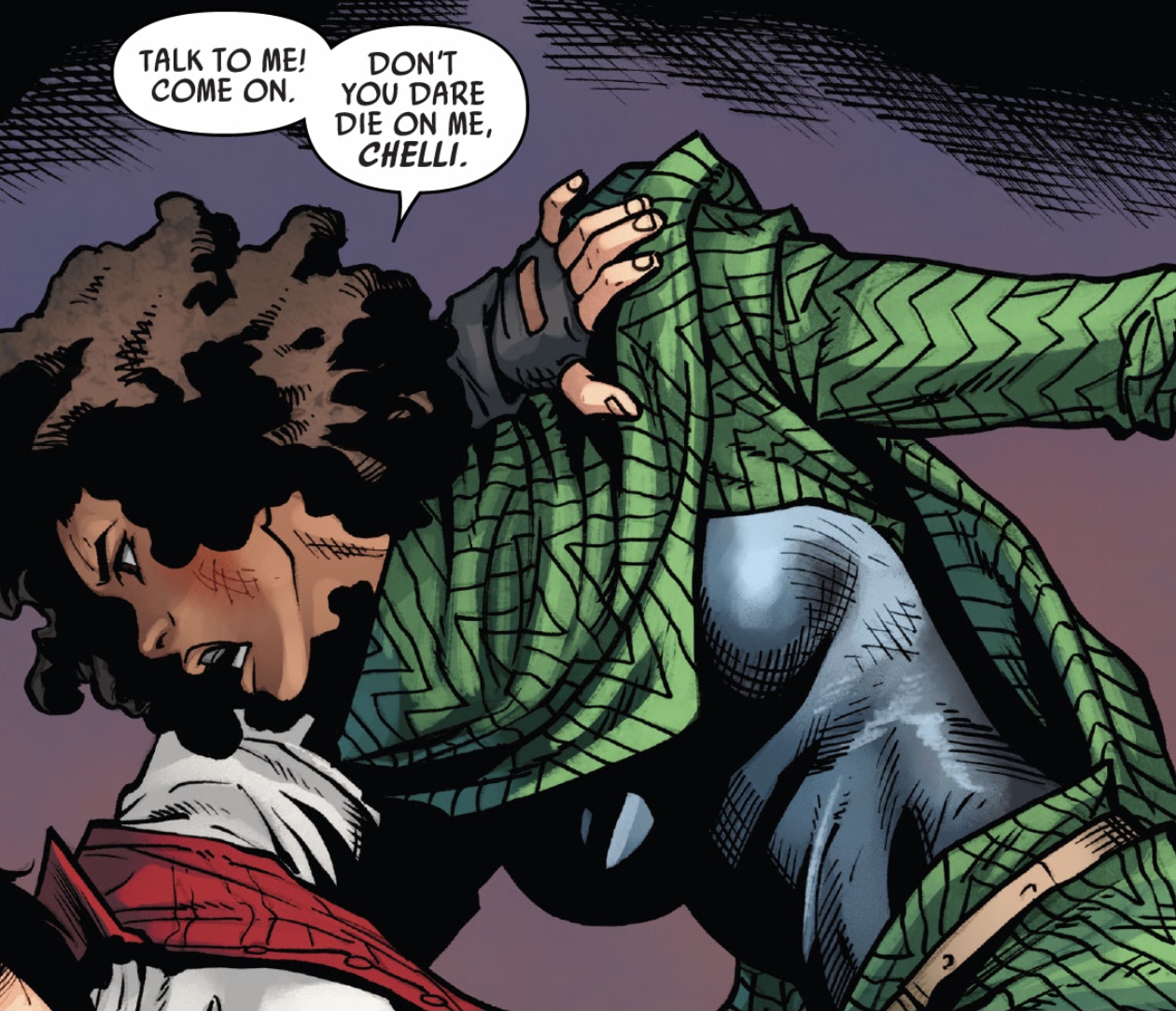 Sana is able to revive her, grabbing the necklace and fleeing the archive. Lucky and Ariole follow. Deathstick’s fate is uncertain as the poison moves through their body. Ariole hints there may be an antidote, but no one is sticking around to find out. As the four of them move through the Vermillion, they notice the guards are distracted dealing with everything else going on in War of the Bounty Hunters, allowing them clear passage to the hangar. Once there, they say goodbye in their own way. 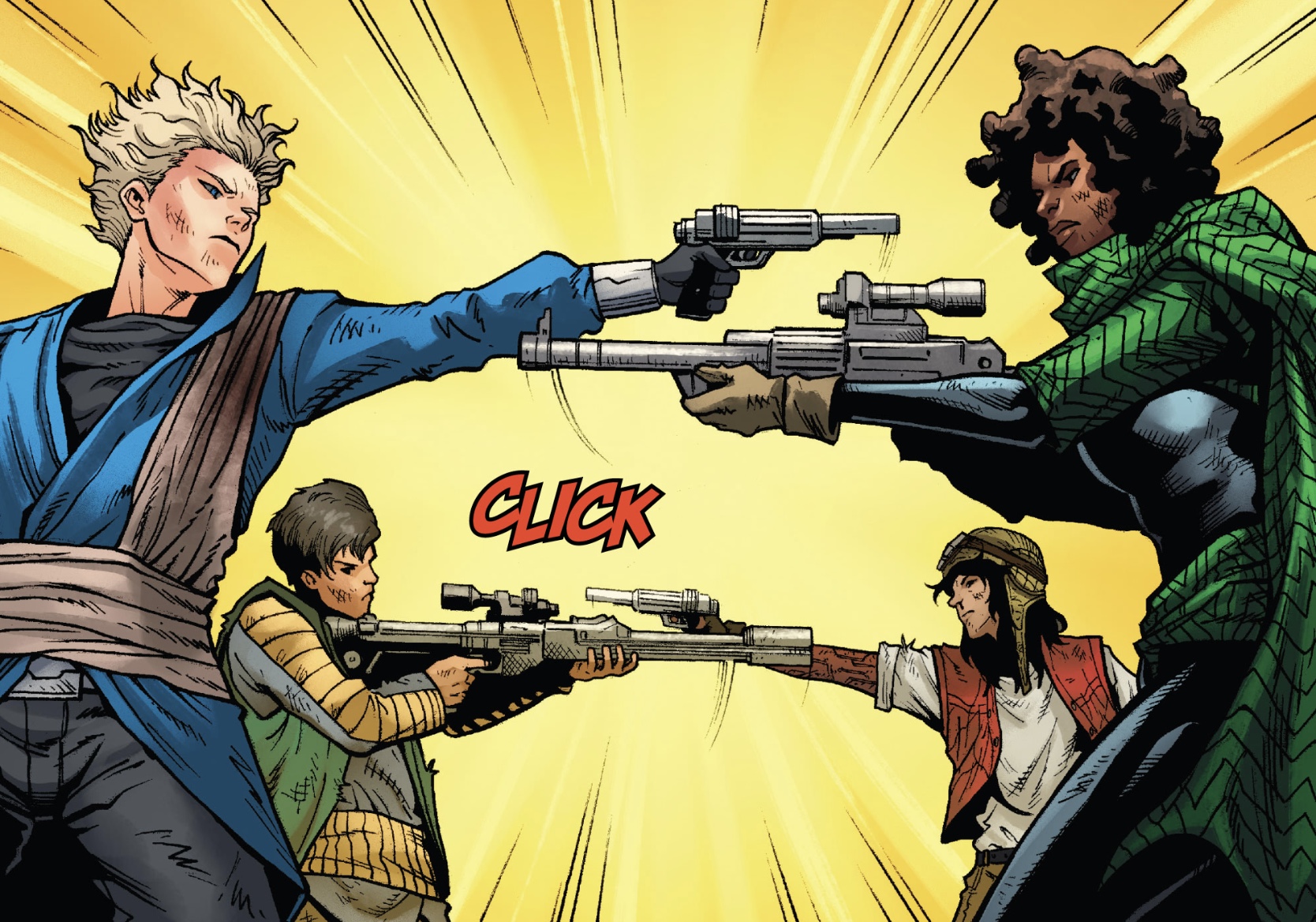 I really don’t think this is the last time we’ll see these four together, blasters pointed at each other or not. The art in this issue is terrific, and this frame offers another demonstration. They all make their separate ways, with Aphra tossing a thermal detonator at Lucky and Ariole’s ship, preventing them from following Aphra and Sana. It also leaves them behind to be captured by Crimson Dawn. I imagine Qi’ra would find Lucky and Ariole very useful if she wanted to pursue Aphra and Sana after they broke into her vault and stole her newly acquired necklace. It plants some very interesting seeds for the future Crimson Dawn stories.

Back onboard the Volt Cobra, we learn more about the Ascendant, a cult of Force users “obsessed with powerful, dark technology“. They were used by the Sith at one point, but their powerful technology took a life of its own, using the will of a Force user against themself. If you’ve been reading your High Republic novels, this sounds awfully familiar to something Marchion Ro has used against some of the Jedi. It’s a bit early for speculation, but writer Alyssa Wong has planted plenty of High Republic breadcrumbs in this series, so I’m going to keep a close eye on this. 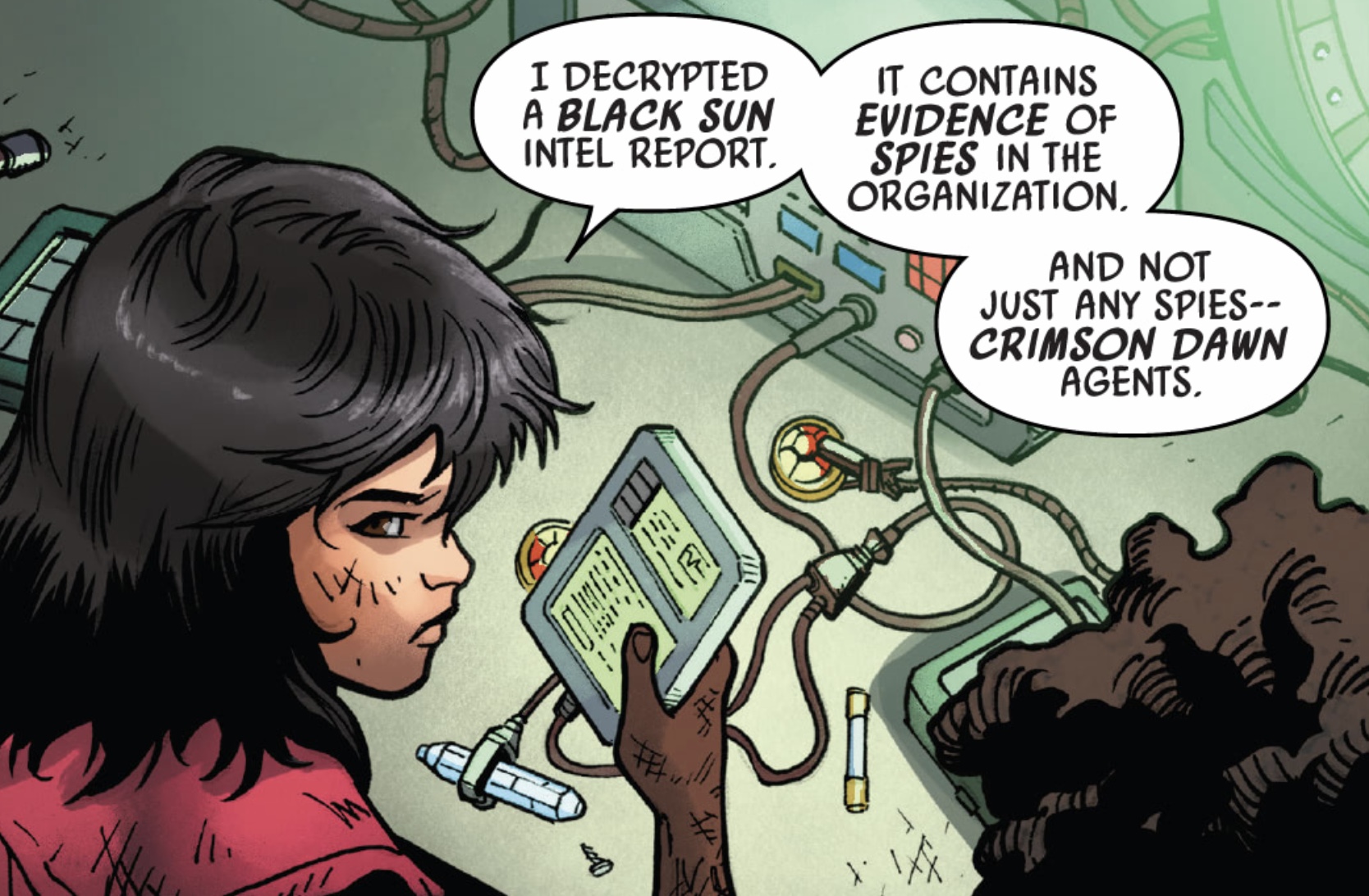 In addition to learning more about ancient Force cults, Aphra shares some knowledge more relevant to current events. She’s uncovered a secret layer of data in the Black Sun data necklace they’re shepherding to Domina Tagge. Crimson Dawn has spies across the galaxy and not just in rival organizations… They are everywhere. The Empire, the Rebellion… Everywhere. The stage is set for Qi’ra’s story to continue.

This is a fantastic conclusion to the War of the Bounty Hunters arc of Aphra and Sana. I love how it wraps up the story but leaves plenty of doors open down the line. Writer Alyssa Wong is great at closing threads while starting new ones, leaving me satisfied but curious about what’s to come. Doctor Aphra seems bound to intersect with the future past of The High Republic, and I’m really looking forward to experiencing that. This character and her story are in very good hands, as this issue continues to demonstrate. 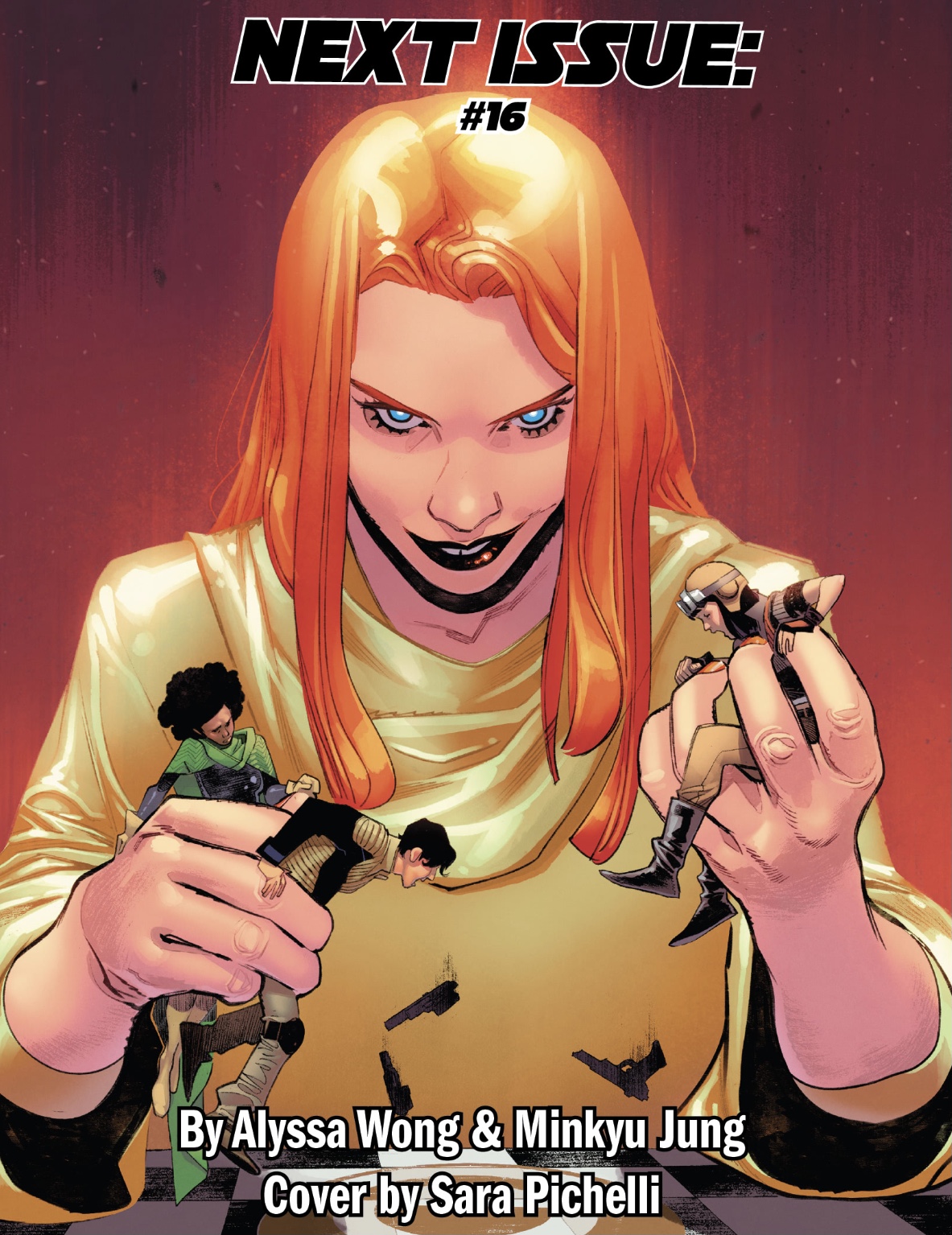 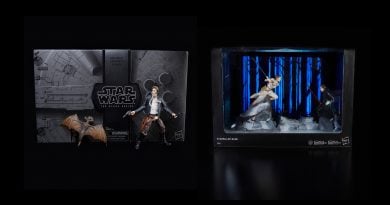 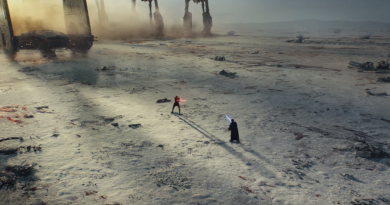 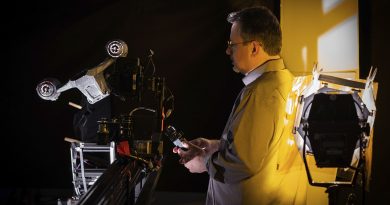