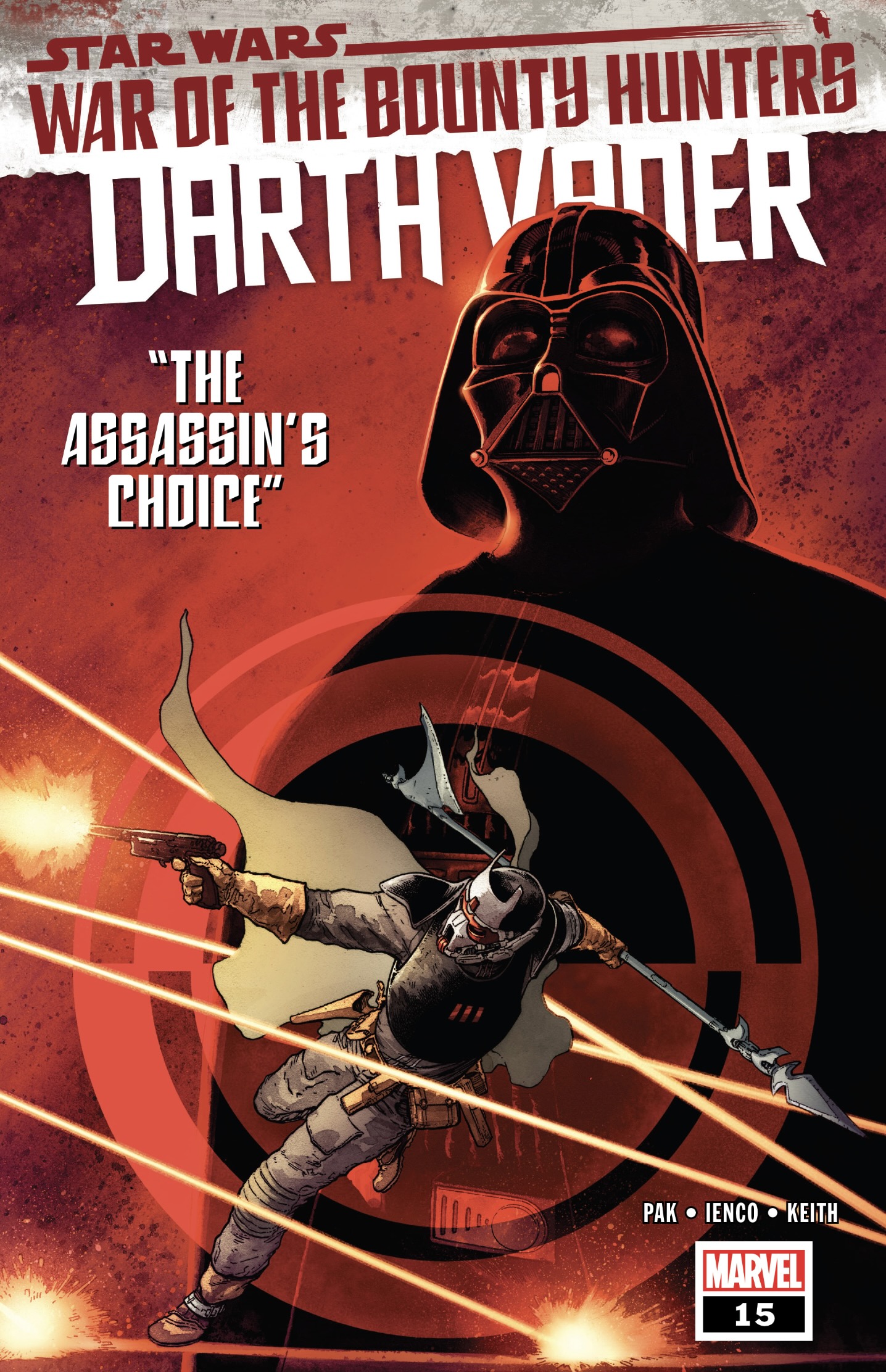 Spoiler alert: I’m ready for War of the Bounty Hunters to wrap things up. Despite my wishes, two more months remain. This week, we learn how Darth Vader and Ochi of Bestoon found their way to the Crimson Dawn gala, and who they’ve set up as a contingency in case they can’t just walk in and grab Han Solo off the auction block. Darth Vader is quite far behind the other issues in War of the Bounty Hunters chronologically, allowing writer Greg Pak to fill in the gaps before the showdown between Vader and Qi’ra. Crimson Dawn has been watching everyone who ended up bidding on Han, Vader and Ochi included. SPOILERS AHEAD…

This issue opens with Vader beginning a series of tests for Ochi, who’s gone from being his potential murderer to sidekick. Vader doesn’t trust anyone, so my only guess is he’s trying to analyze Ochi to the point where he can predict his every intention. Hoping to anticipate when Ochi will put that knife in his back, Vader sends him on a mission to find out more about those in pursuit of Han Solo. Vader’s only interest in Solo is to use him as bait for Luke, so he’s putting Ochi on the frontlines of investigating as he waits in the shadows to strike. Here, Ochi storms a cantina, discovering the invitation we’ve seen sprinkled across other Star Wars comics in this event.

This leads Vader and Ochi to Bokku the Hutt, who planned on attending, but I’m really not sure why. Bokku is deference for Vader, and Jabba seems out of character for Ochi, so he suspects the Hutt has other motives for attending the auction. Nevertheless, Vader steps in, instructing Bokku to play the role of weakling to get Jabba to lower his defenses. Vader giving a pathetic Hutt crime lord advice about Hutt Clan infighting seems a bit beneath him, in my opinion. Not to mention, completely out of character. I can only assume Vader’s motive is to cause enough chaos so Crimson Dawn doesn’t put up much of a fight when the Dark Lord swoops in to get Han. Vader is a complex character, but his methods are usually pretty simple. This Hutt posturing via Vader’s instructions just seems silly and unnecessary.

Oh, what’s this? Vader somehow knows Bokku is working with Crimson Dawn already to double-cross Jabba? Well, yes, and you’re probably confused like me. Vader springs another test on Ochi to see if the assassin is in on Bokku’s unholy alliance with Crimson Dawn. Apparently, Bokku seemed a little too eager to go against someone as powerful as Jabba, so Vader suspects a set-up. After roughing up Ochi and tossing him out of their shared shuttle, Vader orders him to find out who else Bokku is working with. So, let’s recap: The person Vader doesn’t seem to trust at all is being sent to smoke out the double-crossers Vader is afraid will double-cross him. The writing of this issue feels very rushed and leaky with plot holes. The retcon of The Rise of Skywalker feels like it needs a retcon. 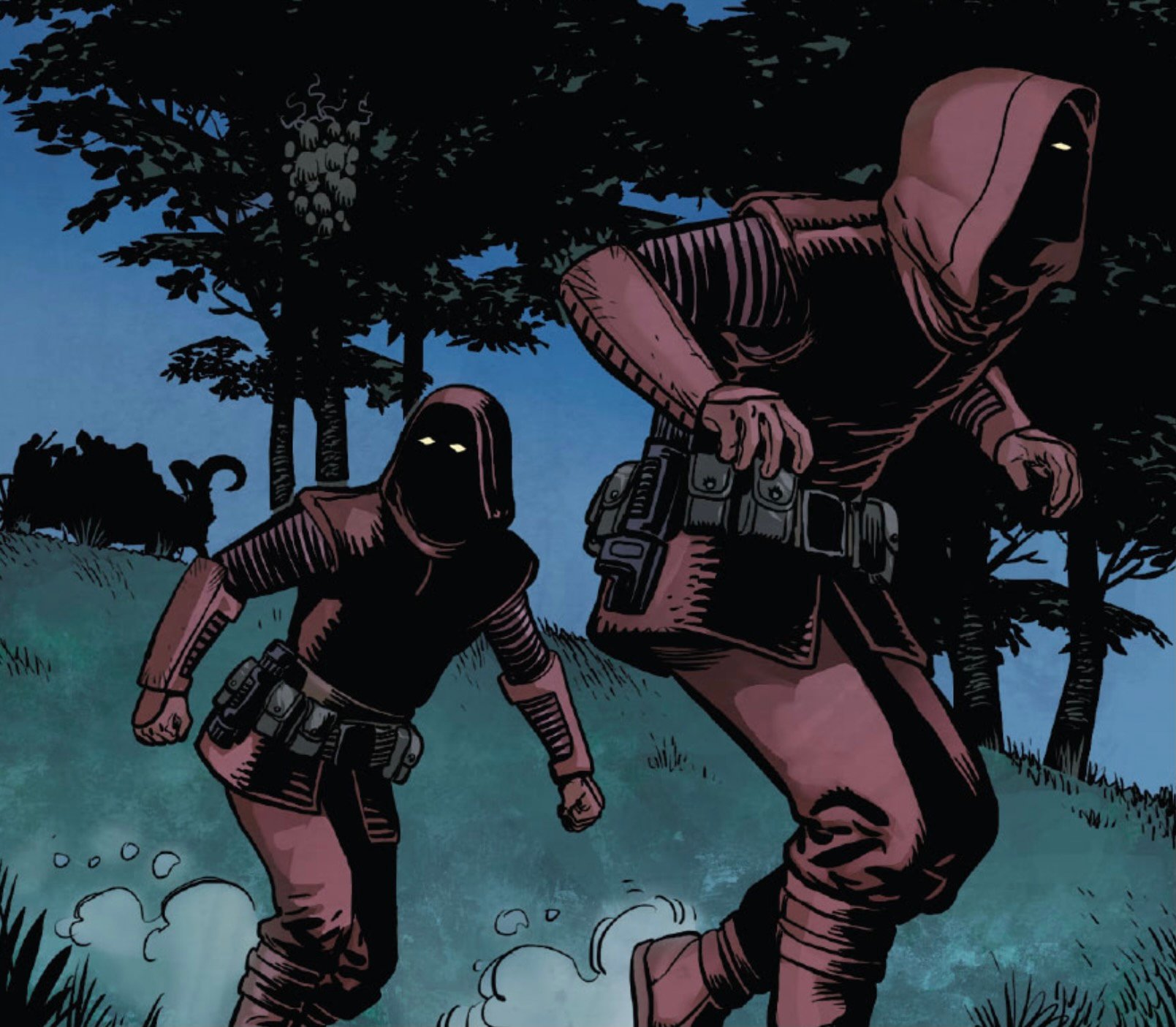 Ochi follows some mysterious bandits, sneaking out of Bokku’s palace. When he springs the trap, he finds out they are Crimson Dawn soldiers. 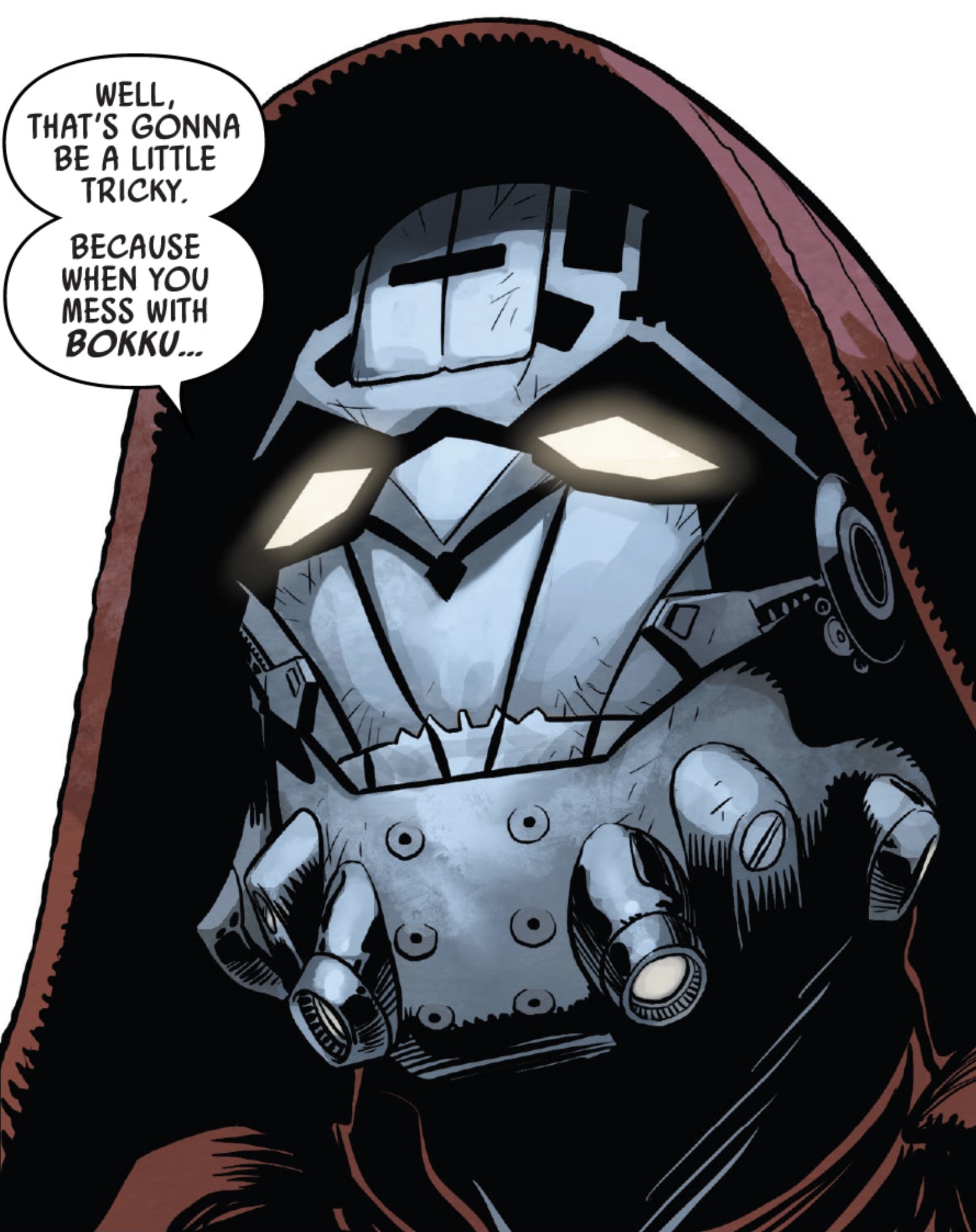 They are all wearing masks and scoff at Ochi’s threats when he tells them Vader has his back. Clearly, there are some seeds being planted here for the forthcoming comic based on the powerful crime syndicate. Unfortunately, this prelude to future stories is the most interesting aspect of the final pages. Ochi isn’t deterred by the Crimson Dawn swagger they throw his way, blasting them all, or so it seems. 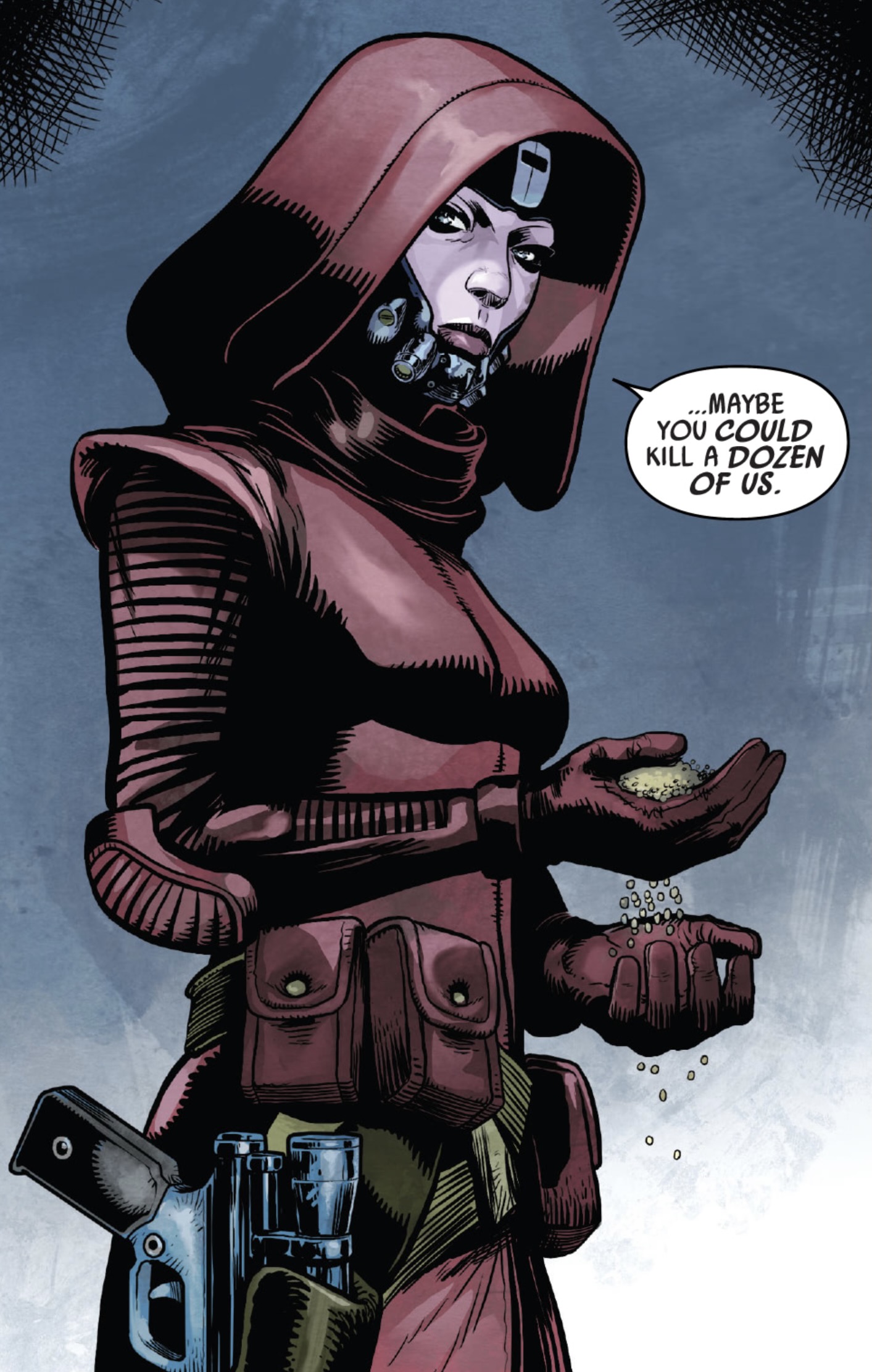 This mysterious figure has some sort of magic powder which regenerates and increases the Crimson Dawn army by the millions. Yes, millions, they said. They offer Ochi the chance to join, just as Vader returns to join the fight. They quickly dismantle the group, but after a few moments, the strange Crimson Dawn soldiers are reanimated and ready to fight back. 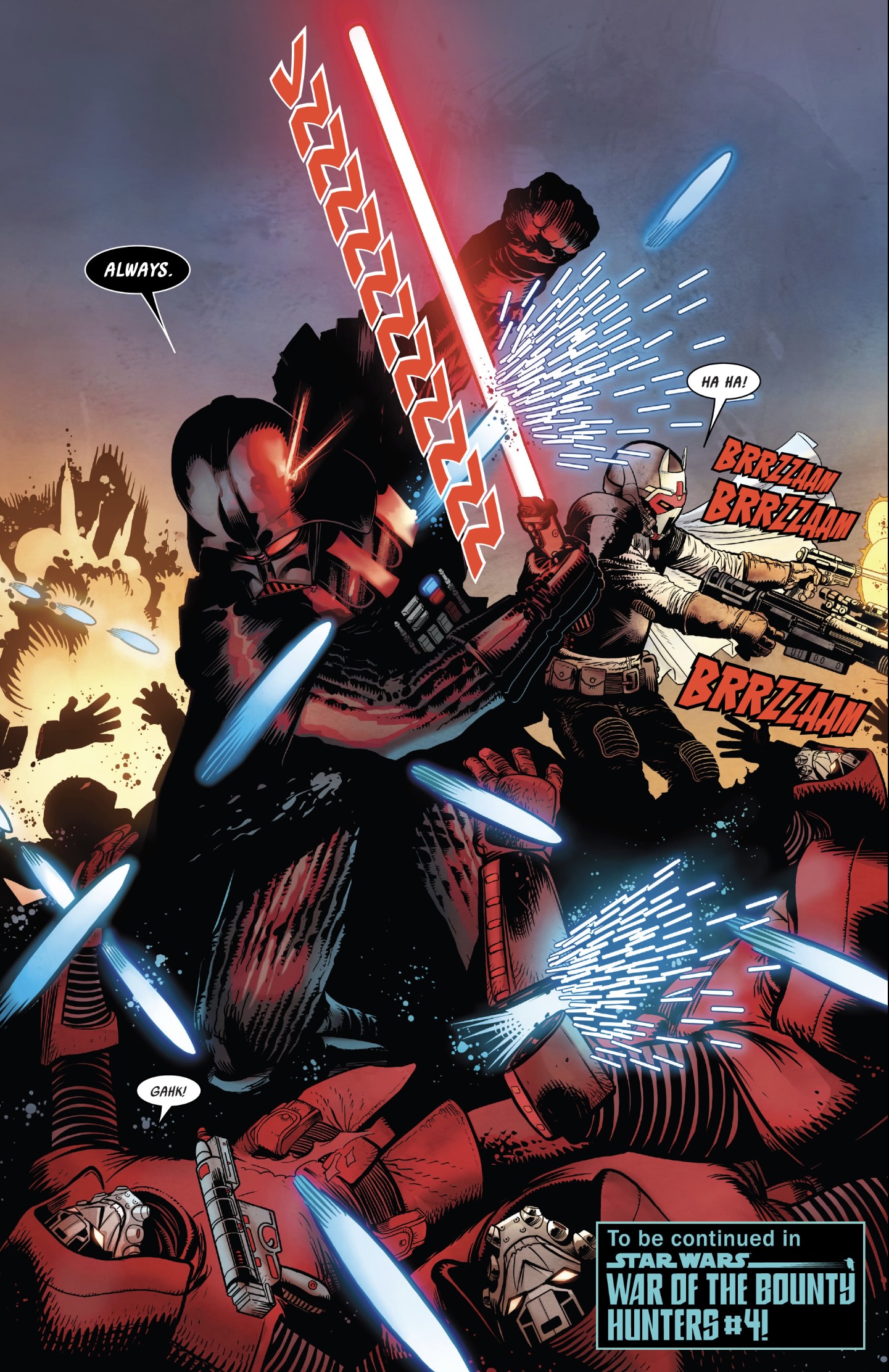 Will Vader and Ochi survive these zombie Crimson Dawn soldiers? Will Bokku the Hutt outsmart Jabba? Who will get their hands on Han Solo’s carbonite sarcophagus? Tune in, same Vader-time, same Vader-channel.

I apologize for the snark, but I’m so disappointed in the direction Darth Vader has taken. The opportunity to explore the end of his life, confronting Luke with the truth and facing the rejection of his son, the last embodiment of Padmé, where I feel a writer could really explore the emotional journey to the Emperor’s throne room in Return of the Jedi, feels wasted. And Greg Pak is a great writer, so it’s surprising this series has turned into the Vader/Ochi story. Trying to shove these characters into War of the Bounty Hunters also does this series no favors. I don’t want to keep pouring on my criticism, so I’ll say I’m still hopeful we can get some great Vader stories here, and if Star Wars wants to expand upon Ochi, give him his own series. Making him Vader’s sidekick only dilutes and demeans both characters. 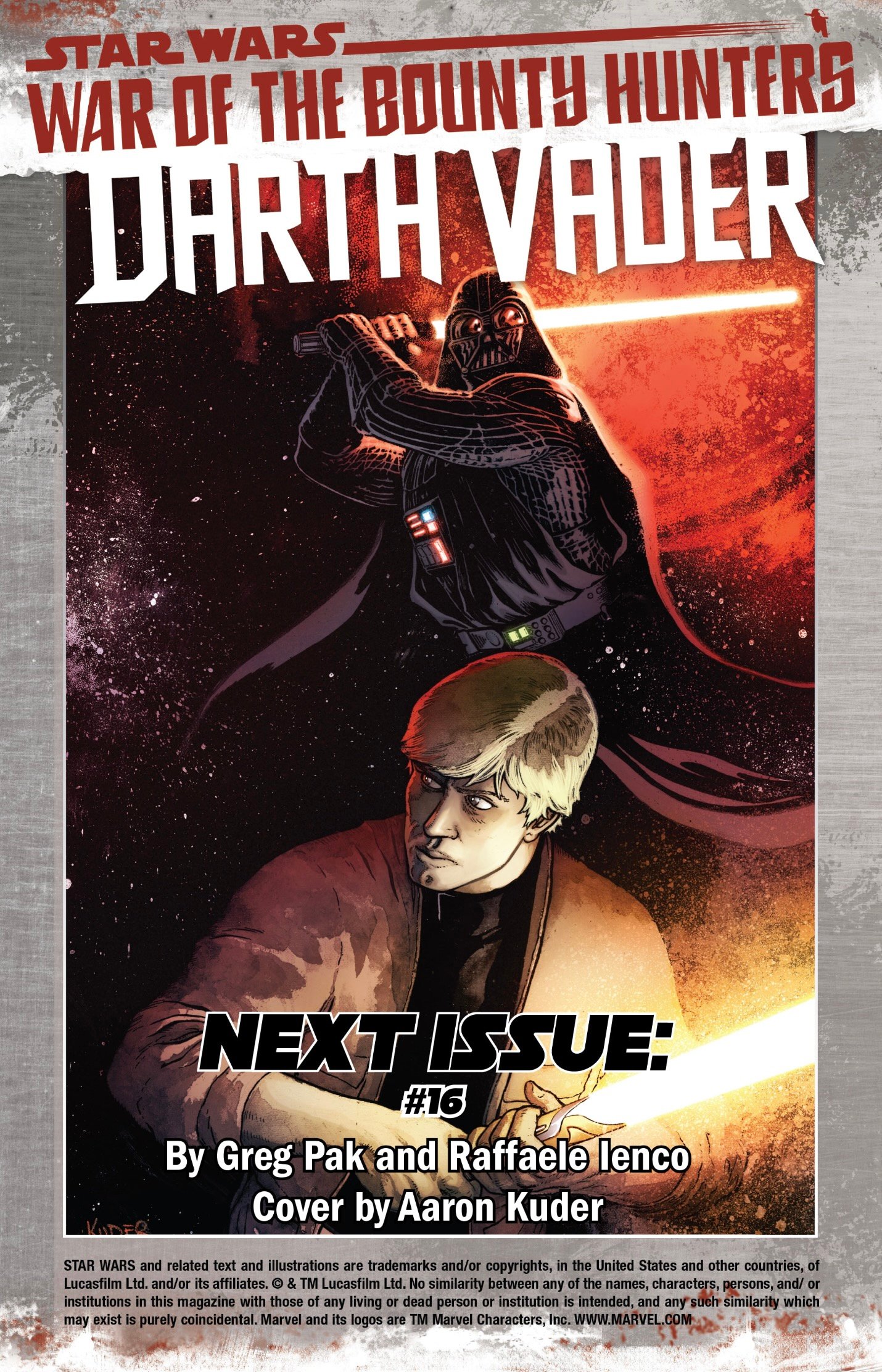