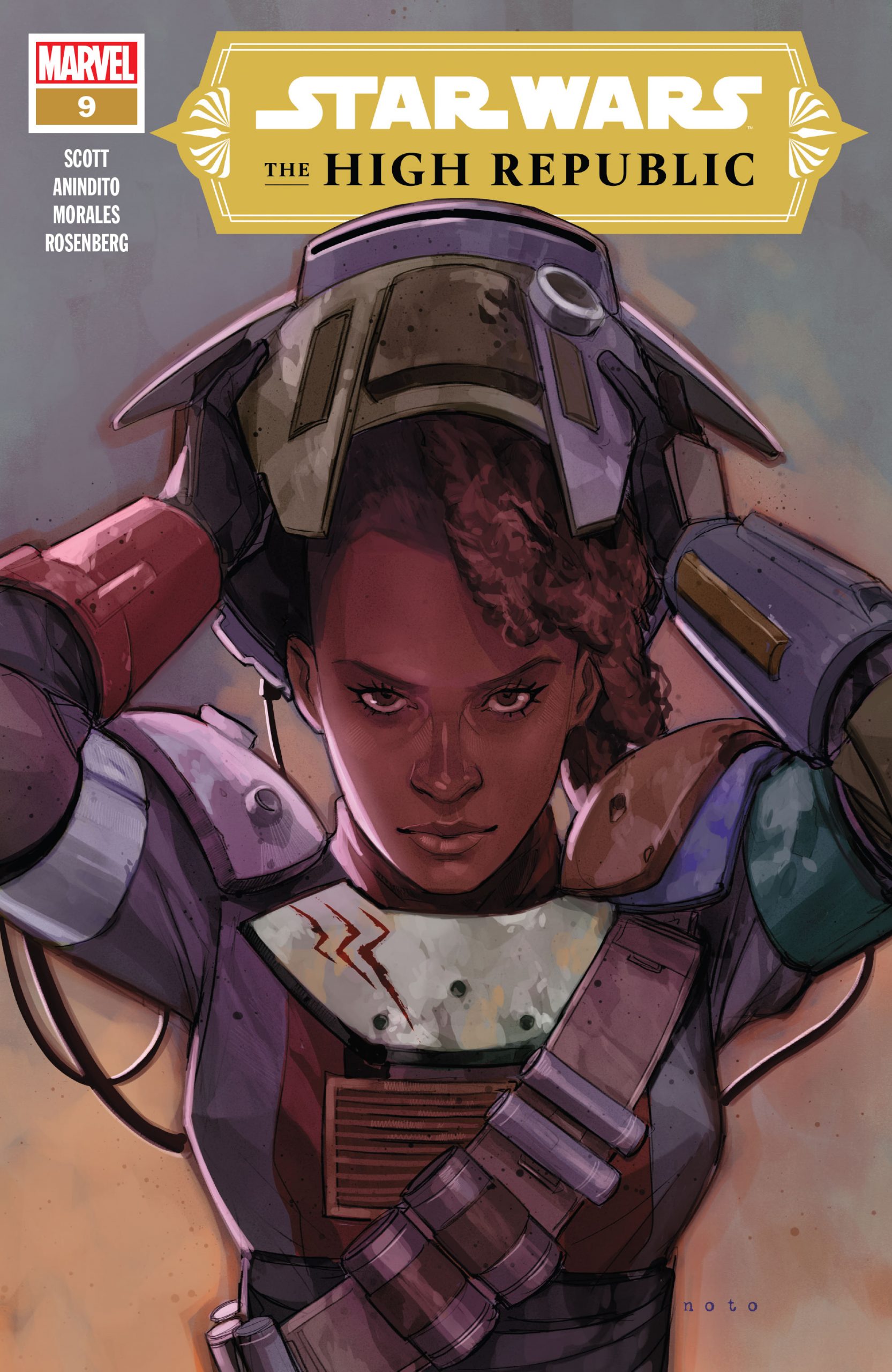 Welcome to the next phase of The High Republic.

One of the great things about this media initiative has been the meticulous planning and the intentional movement from one phase of storytelling to the next. Now, The High Republic Marvel series moves into that next phase in this ninth issue, with everything before set after the first tentpole novel of the initiative Light of the Jedi, this issue moves a few months into the future and is set following the second novel: The Rising Storm.

Don’t worry if you haven’t read it though, the premise is simple: The Nihil attacked the Republic and killed hundreds, the Jedi are now working on ways to bring the Nihil to justice.

We start with Keeve Trennis narrating her respect for Jedi Wayseeker Orla Jareni, while Jareni is being attacked by a Nihil Stormship.

Jareni is able to call for backup just as her fighter is disabled by the Nihil. We get our first reveal of the issue…. 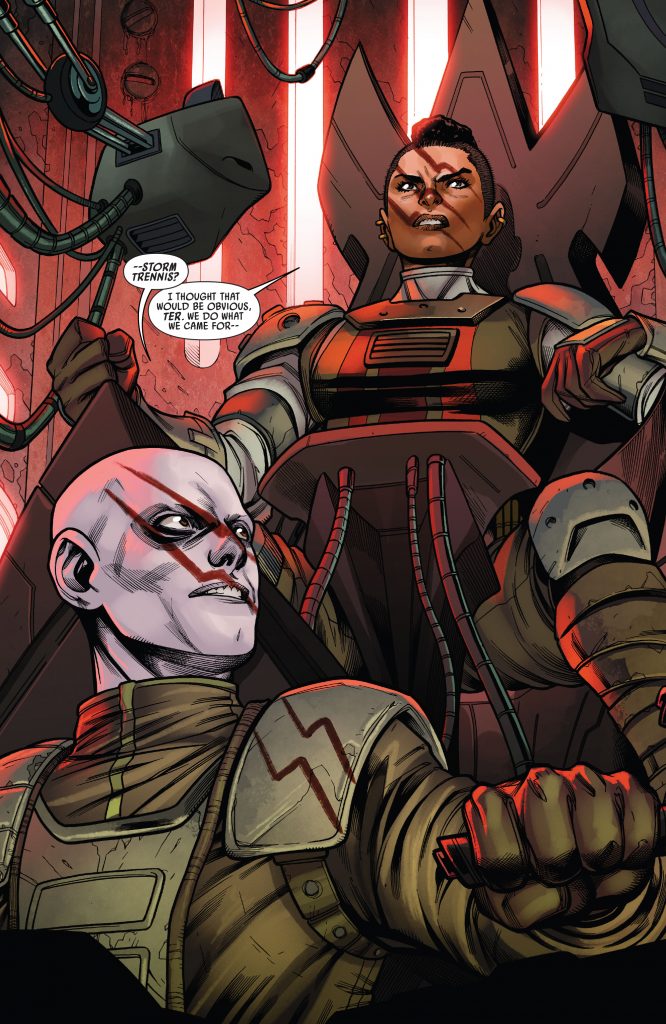 Trennis and Terec are both part of the Nihil, which is actually obvious given the issue’s cover, but comic books covers are notoriously stylized, so I didn’t even make the connection at first.

A Jedi Starcruiser arrives as backup, with Trennis’ former master, Sskeer, leading the fighters. The Nihil warriors aren’t outmatched though, as backup of their own arrives.

Eventually, Trennis is able to gain the upper hand on the Trandoshan and gains a fatal blow, destroying the ship. 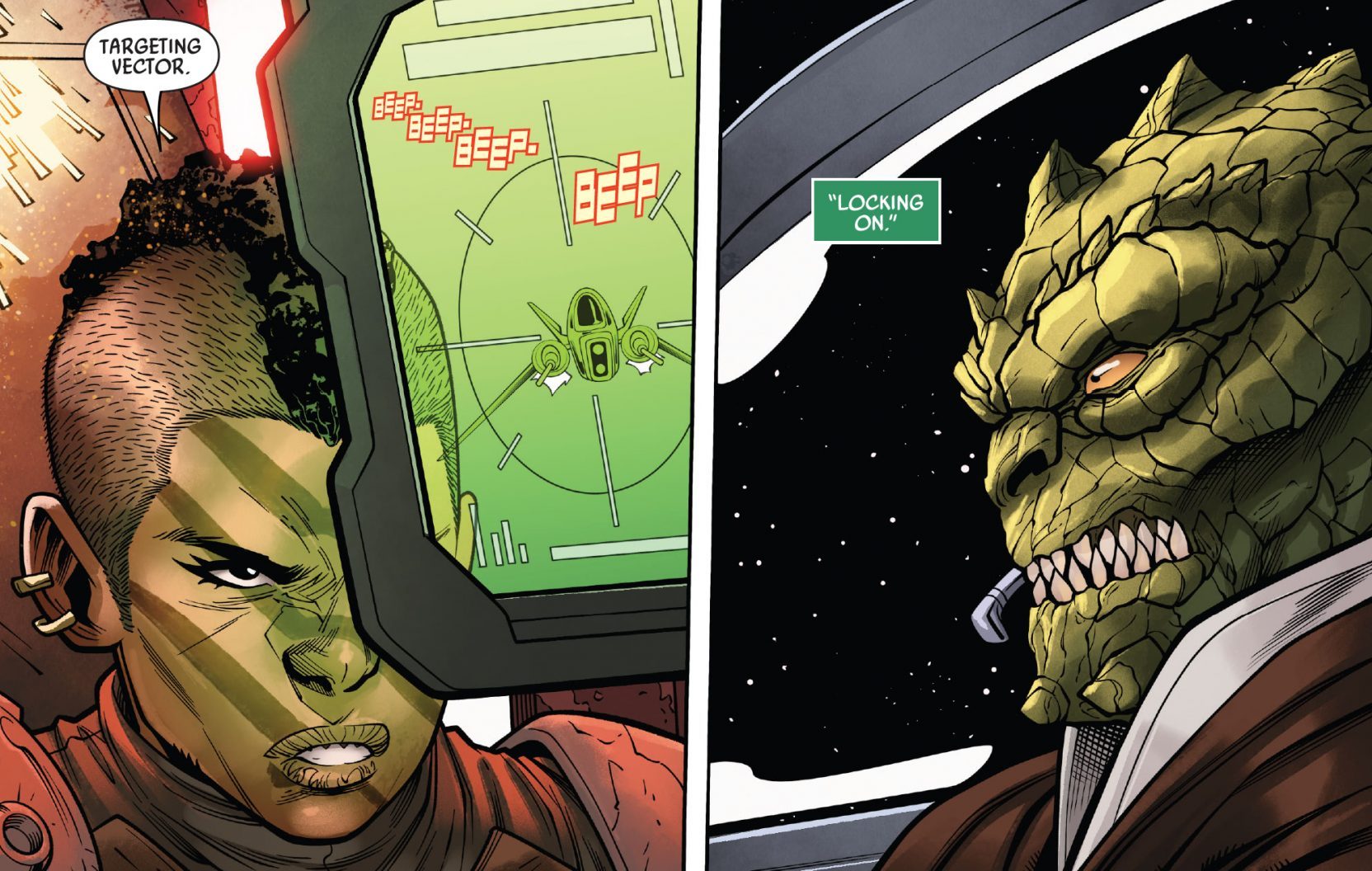 The newly arrived Nihil use magclamps on Trennis’ ship, saving them from the remaining Jedi and then jumping to light speed. Obviously, Trennis hasn’t actually become a Nihil and killed her old master. Avar Kriss and Sskeer (whose death was staged) discuss their hopes that the Nihil have bought Trennis and Terec’s ploy.

We flashback to a meeting of the Jedi aboard the Starlight Beacon discussing how they plan to deal with the Nihil. Unhappy with the decisions being made, Trennis storms out of the discussions after arguing with Jedi Masters Kriss and Gios. 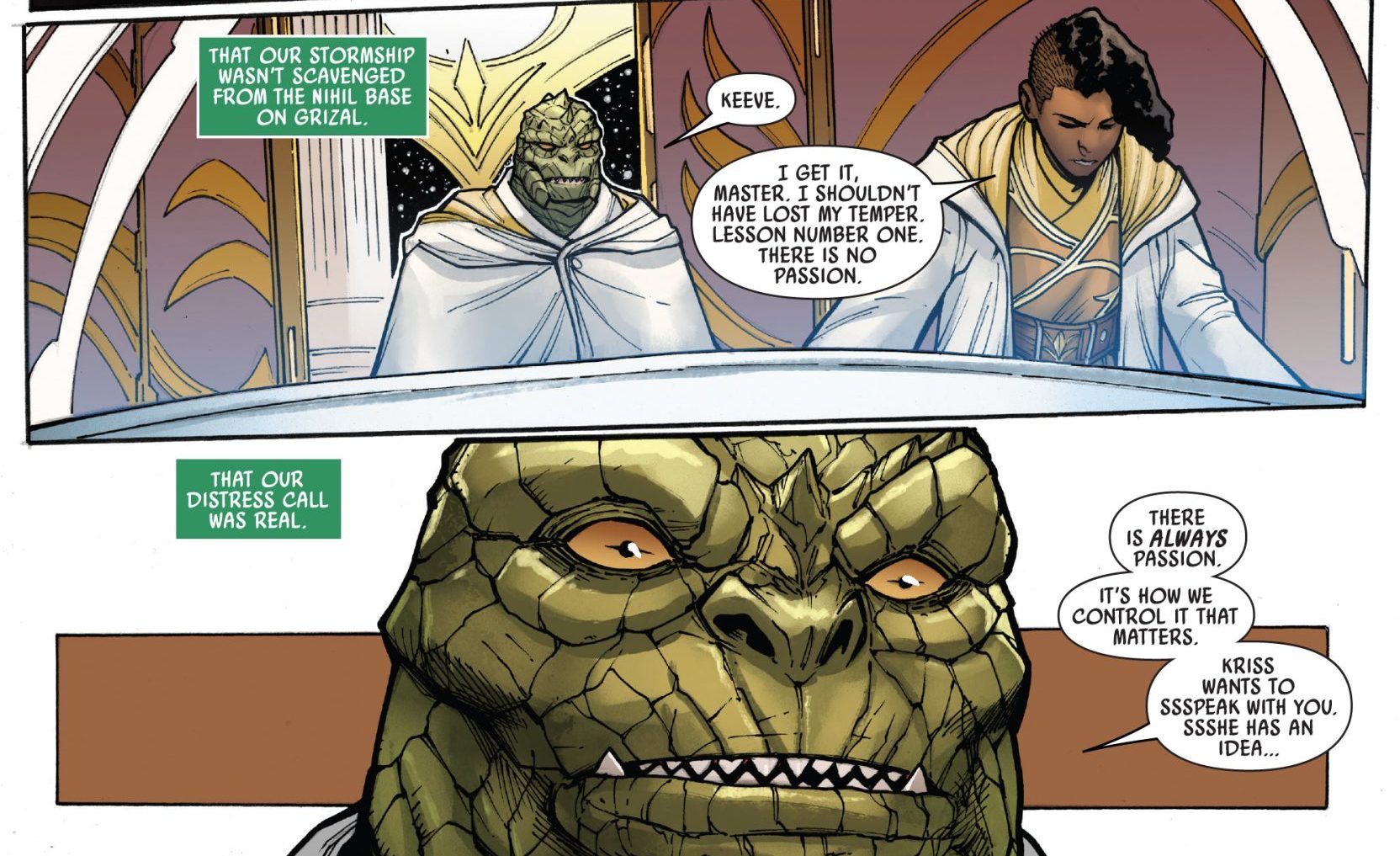 It’s always fascinating to see different interpretations of the Jedi dogma, especially considering that one of the downfalls of the Jedi of the Republic is their rigidity and unwillingness to change.

Kriss’ idea is for Trennis and Terec to go undercover, disguised as Nihil from a group whose Tempest is presumed dead. The two travel back to a Nihil base with the crew that saved them. There, they are questioned to make sure they really are Nihil, then they are tested. 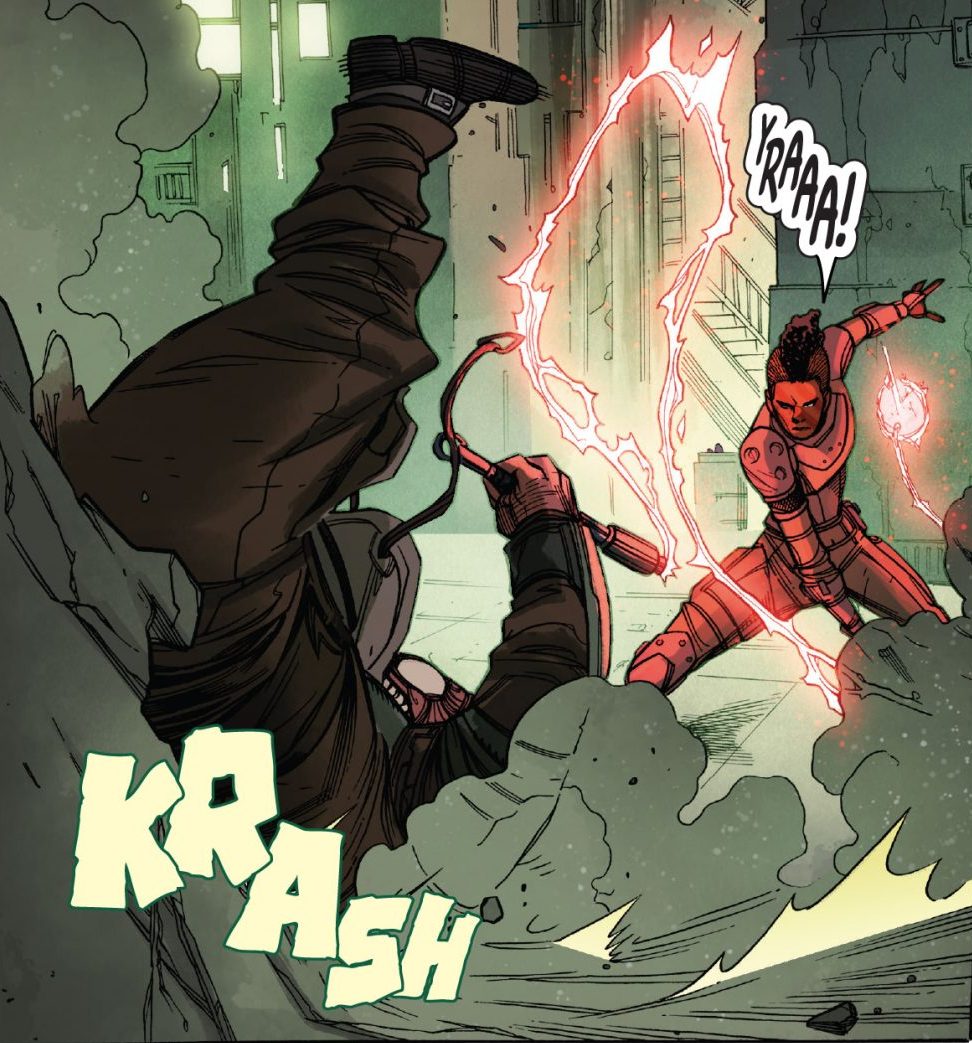 Trennis responds in a merciless and aggressive manner as only a Nihil would, interrupted by the appearance of Zeetar, the group’s new leader. 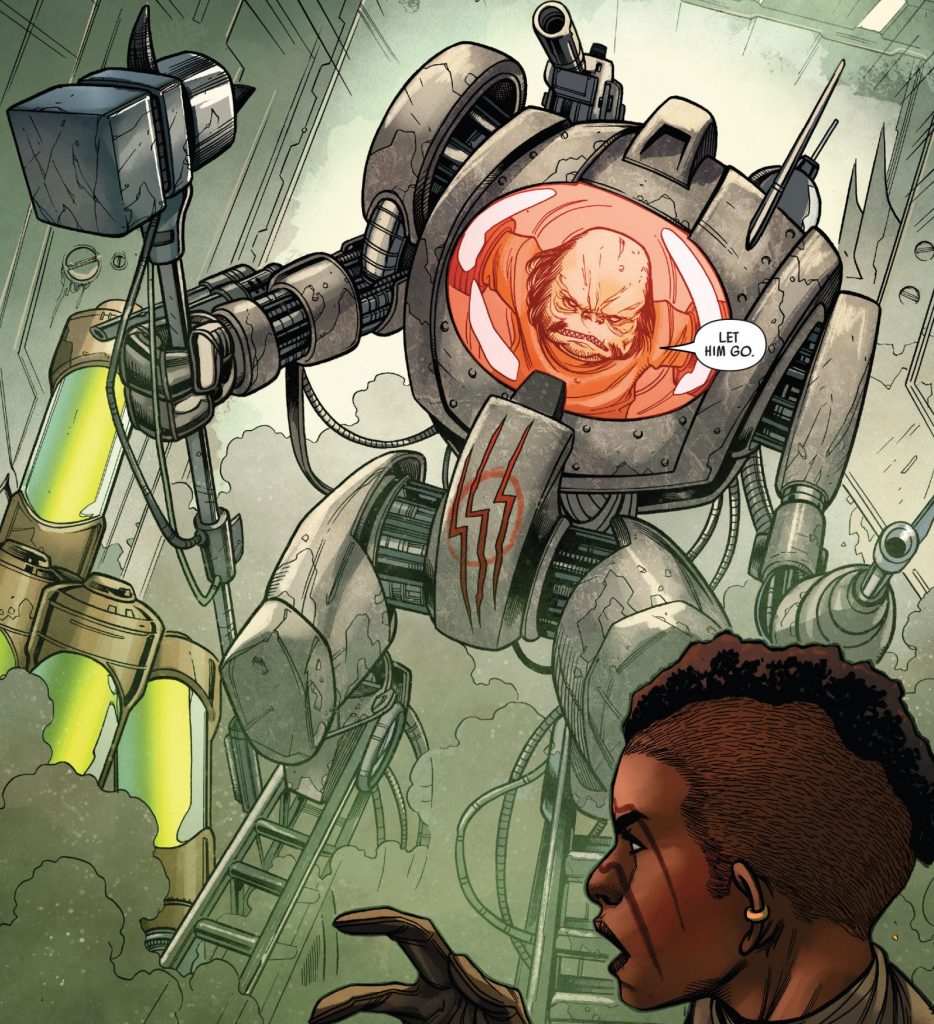 Zeetar needs more proof that they really are Nihil, and that will require Trennis to do something no Jedi ever should… 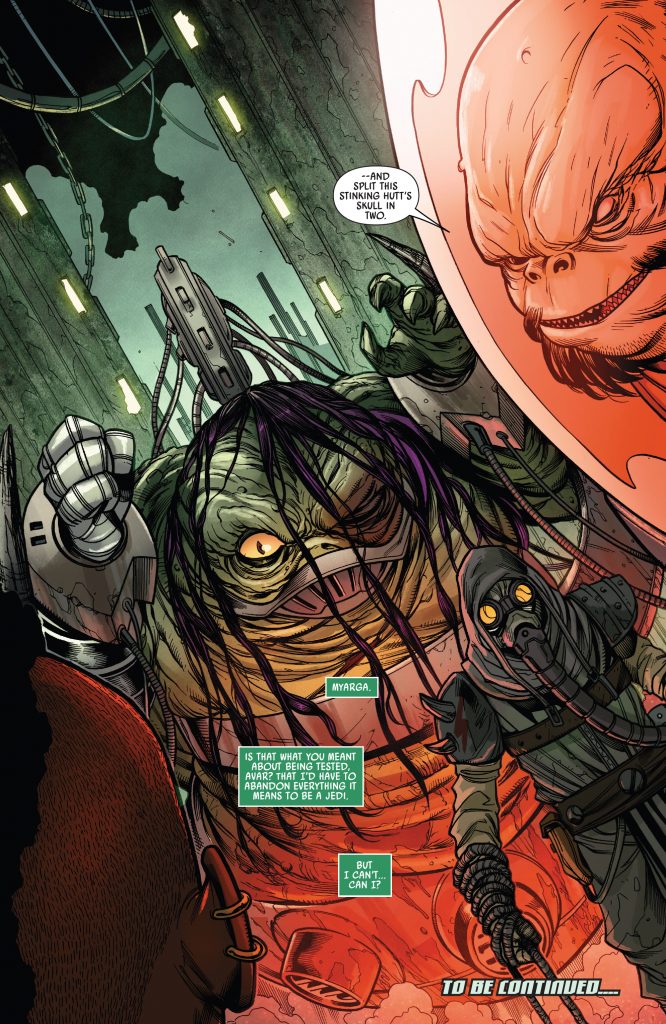 … execute a prisoner. Myarga the Hutt has been a big part of The High Republic series so far, but it’s very surprising to see her here in such a vulnerable state, when it was only last issue she was cutting down Drengir with her minions side by side with the Jedi.

While this is primarily a set-up issue, Trennis as an undercover Nihil is a storyline with high potential, so it will be interesting to see how they deal with this cliffhanger. Hopefully it’s something interesting and not a cop-out.

Ario Anindito is still the artist, which is great news; sometimes new arcs mean new artists, but luckily we’re continuing with the high bar this series has set for ongoing comic book art.

This is far from the most exciting issue, but it’s a great jumping on point for those looking for a new story and who are possibly more interested in the Nihil part of The High Republic than the Drengir plot lines! Hopefully, this set-up will pay off in the coming issues. 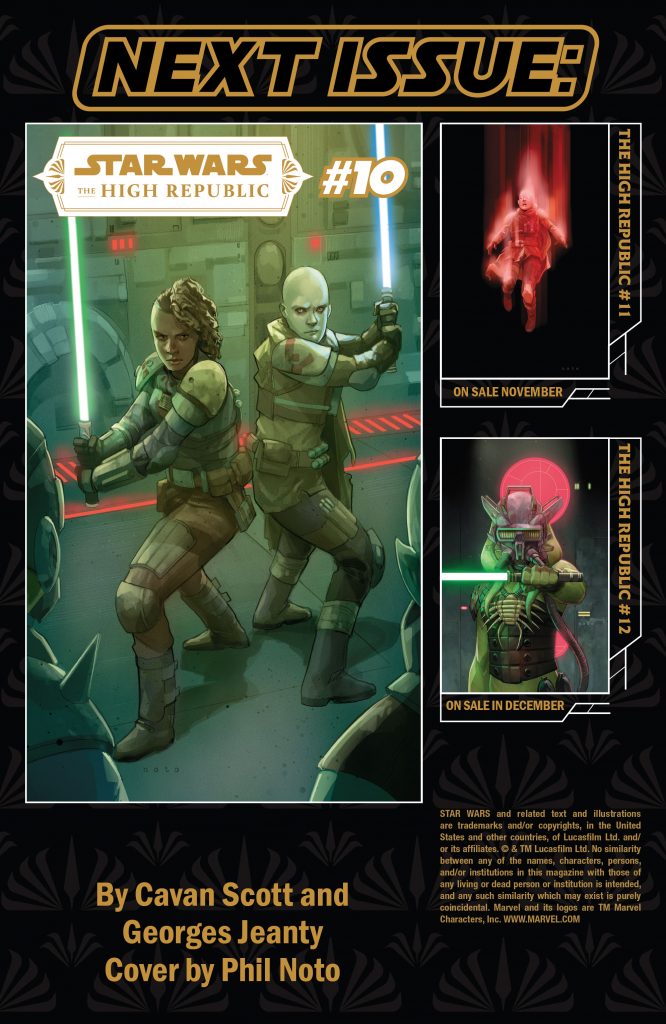