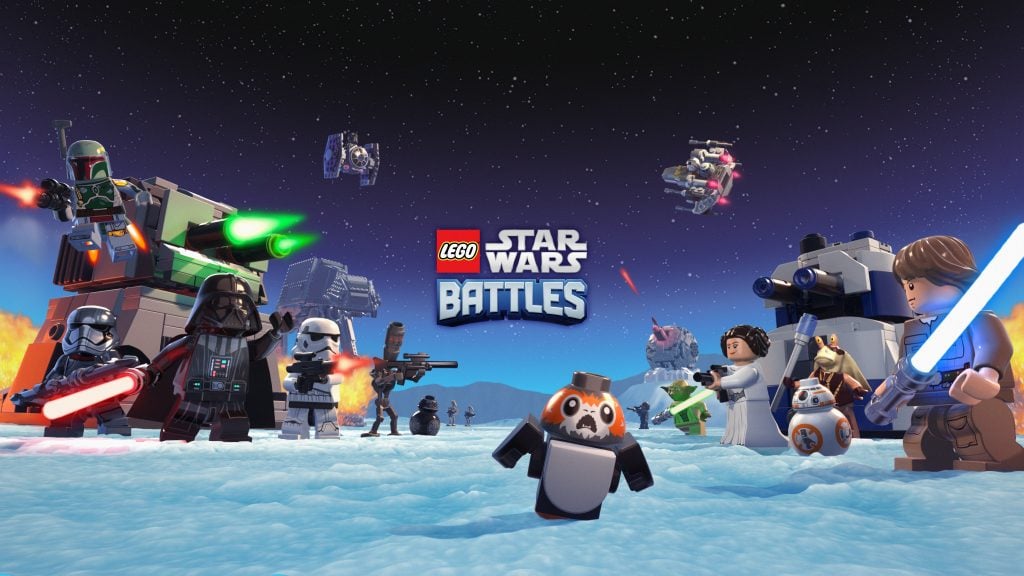 Ready, set, build, and battle! Today is the launch of the newest Star Wars mobile game, LEGO Star Wars Battles. It’s a multiplayer strategy game where players build light and dark side armies to compete against others in real time PVP battles. I was given a first look at the game this week with the developmental team from TT Games Brighton to hear more about the innovative gameplay, how they incorporate the world of LEGO Star Wars, and more.

LEGO Star Wars Battles is a mobile game where you collect, build, and fight in iconic moments of the Star Wars universe. It consists of building towers and armies, while also collecting medals and tokens, and traveling the galaxy to planets like Jakku, Hoth, and Scarif. This strategy game is about the synergy of units and characters to take on other players. With over 40 units from all eras of the Star Wars universe, including towers, AT-ATs, and Y-Wings, players will attack, defend, and capture territory. It features all your favorite characters, sounds (seismic charges!), and music from both the Star Wars and LEGO Star Wars franchises. The team worked with both LEGO and Lucasfilm throughout the design process, and even created original character designs for the game, like the flame trooper.

One of the most fun aspects of the game is the use of the humor that comes with LEGO. The TT Games Brighton dev team stated it was important for this to shine throughout the game, so get ready for porg attacks! That’s right, the porgs can fight other characters. When creating the game, they explored all the different characters within the galaxy, and made sure to include a wide range of melee combinations. So why have a porg attack Darth Vader through the air and headbutt him? “It’s super funny,” the team says.

So what else can Star Wars fans and gamers expect? If you’re a collector, you’re going to love the card shop. In the card shop, you have light and dark side decks with the characters for your battles. Heroes and villains have their own unique abilities, from Darth Vader’s Force Slam to Luke Skywalker’s Force Push, so you’re going to want to master both sides of the Force. Using gems and gold tokens, you can get new cards for your deck, including powerful champion characters. The game will have monthly events and challenges, so players should check back daily to level up their decks and improve their gameplay.

LEGO Star Wars Battles looks like an addictive strategy and collecting game. It doesn’t have any in-app purchases, so players have access to all the characters, vehicles, and planets in the game as they level up. With all the different combinations for battle, players have so many opportunities to explore this galaxy in unique ways, while enjoying the humor and fun that’s expected from the LEGO Star Wars franchise.

Ready for #HasbroPulseCon? It kicks off 10/22 with 2 epic days of news & exclusives from brands like #StarWars. Thanks to @Hasbro for getting us hyped with packages like this! ... Head over to our Instagram for a closer look and stay tuned for our coverage and giveaways! #FreeProduct