Review - Ty Yorrick Finds the Past in the Present in IDW's The High Republic Adventures: The Monster of Temple Peak #1 - Star Wars News Net Go To Top
Skip to content 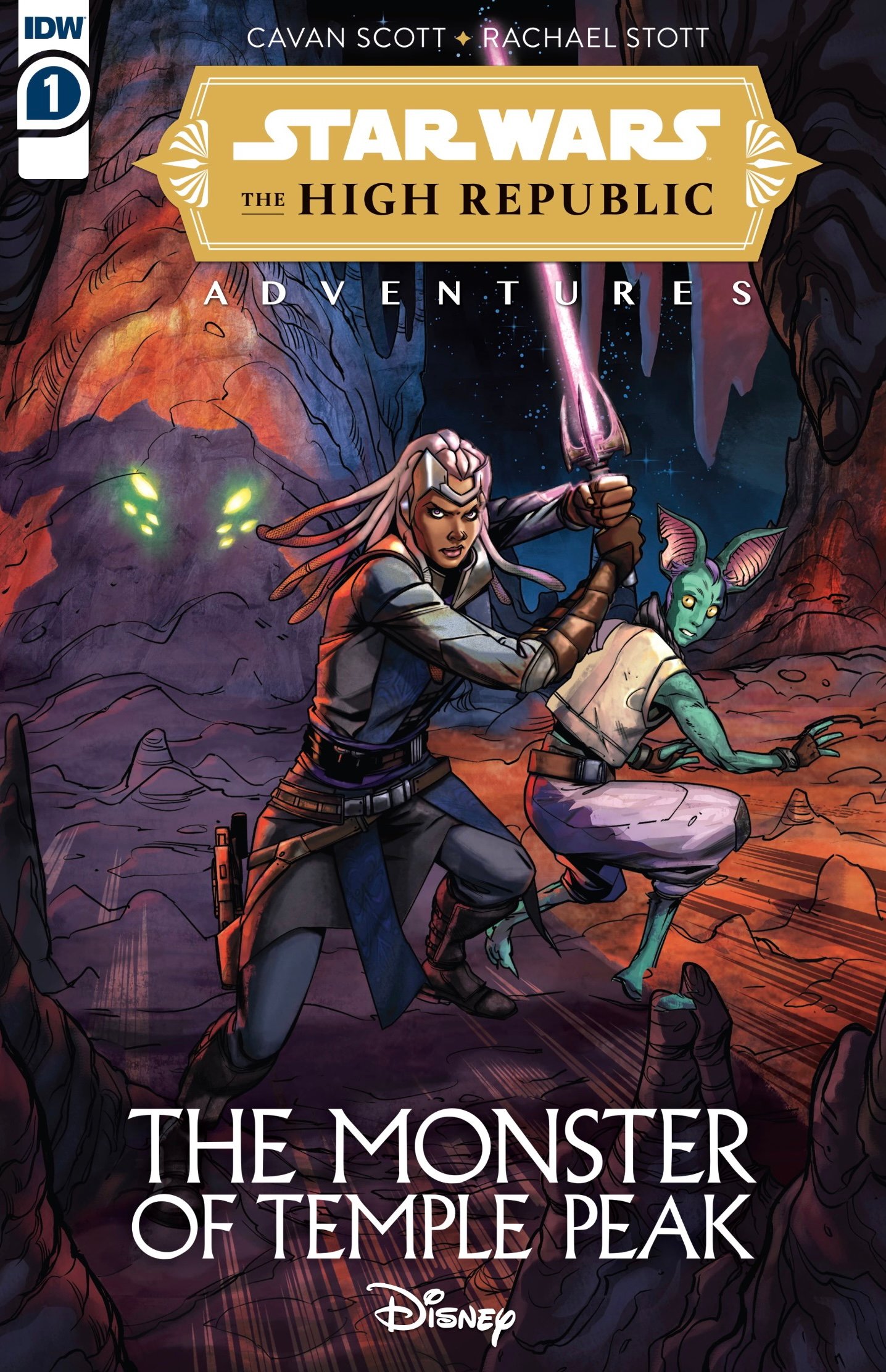 Writer Cavan Scott heads back to the familiar pages of IDW with a story about Ty Yorrick, monster-hunter and saber-for-hire. Introduced in Scott’s The Rising Storm, Yorrick caught a lot of readers attention. A former Padawan, whose backstory remains a mystery, Ty Yorrick travels the galaxy making a living off of her skills with a lightsaber. Often times, she’s going after local predators causing trouble for farmers or villages on backwater worlds. Only this time, memories of her past as a padawan fight to inform Ty’s present. SPOILERS AHEAD….

The story begins on the planet Loreth, at the edge of the galactic frontier. A curious young villager sneaks off to the outskirts of town, a receiver in hand, hoping to overhear some Jedi transmissions beaming across the galaxy. Just as she’s discovered and scolded, a foreboding noise sounds off from the nearby forest. The village has an uninvited visitor. 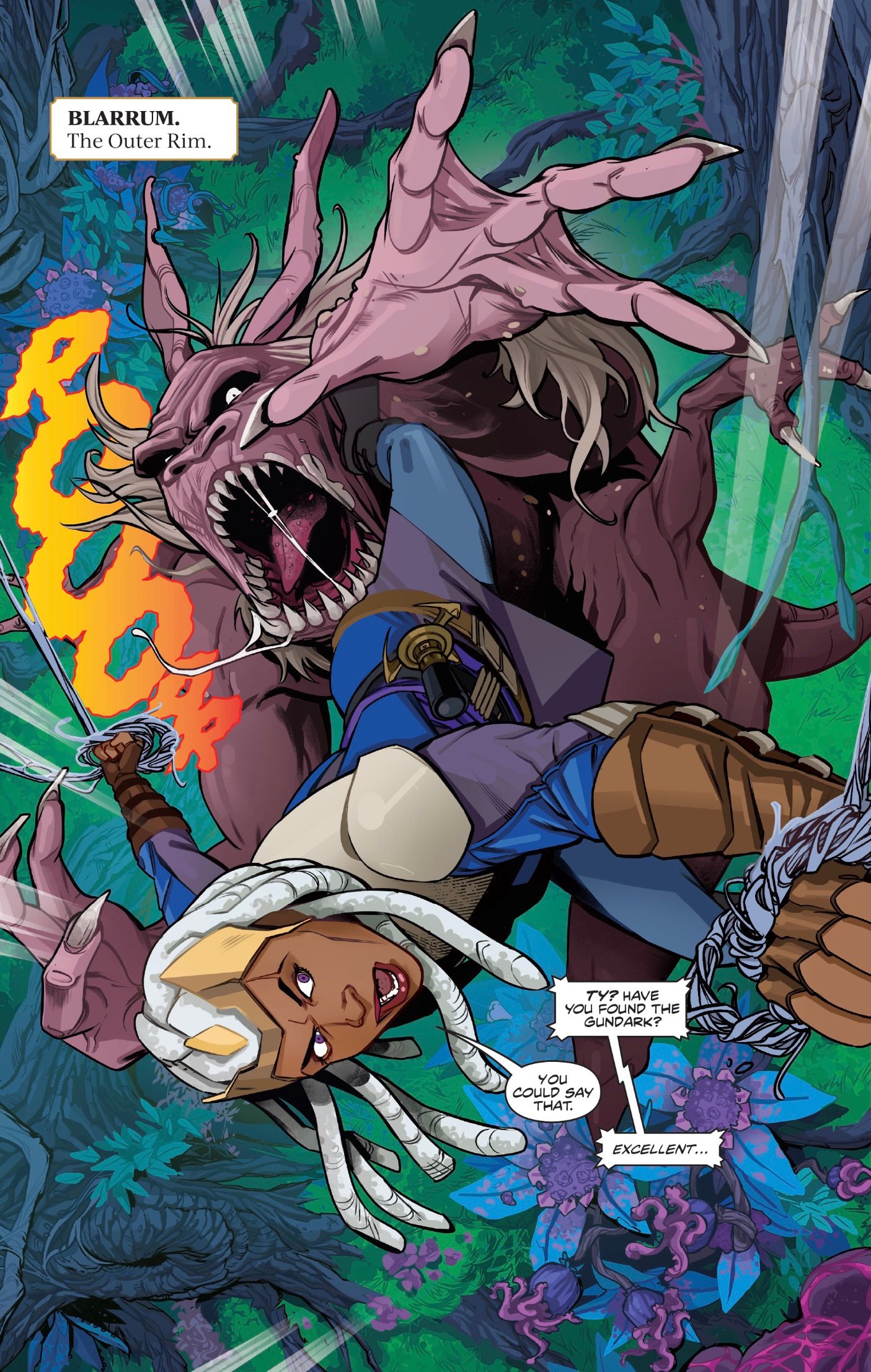 Meanwhile, in the Outer Rim, Ty Yorrick deals with a  gundark. Wonder if Obi-Wan or Anakin ever read about her exploits as a monster hunter from this era before they fell into that nest. As Ty struggles to contain the gundark, her droid partner, Kayel, reminds her how much they need the credits from this job. The difficult part is their contractor wants the gundark alive. Once Ty is tossed several meters in the air she’s ready to give up until an innocent bystander gets caught in the battle. 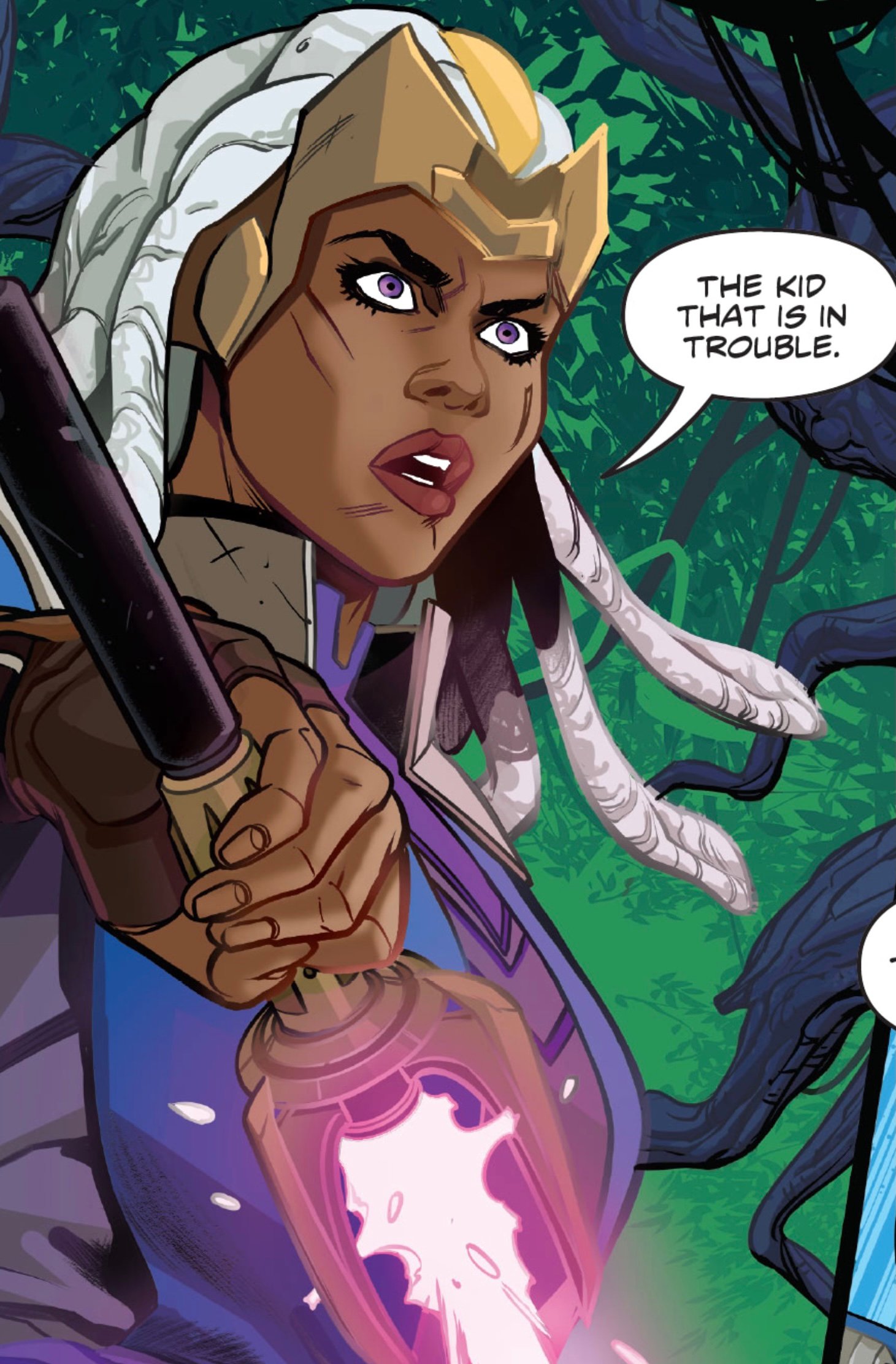 This is very similar to Ty’s introduction in The Rising Storm. Cavan Scott goes out of his way to inform us Ty still protects the innocent, holding on to lessons from her days as a Padawan. Though we don’t know what drove her to leave the Jedi Order, there are still truths she honors. Ty kills the gundark, potentially killing her salary along with it, in order to protect the kid in the middle of them. Once she’s finished the job, she returns to the nearby spaceport, just as a few Jedi arrive looking for the same person she is.

Ty found him first but he’s not happy about the dead gundark she’s brought him. Just as he’s about to turn his gang on Ty, the Jedi arrive, ready to arrest him for illegal poaching. Ty uses the distraction to make her exit but she still has Kayel to deal with. As the droid scolds her for allowing her personal feelings to interfere in their business, something Kayel hints Ty has done before, it triggers a memory from her Padawan days. 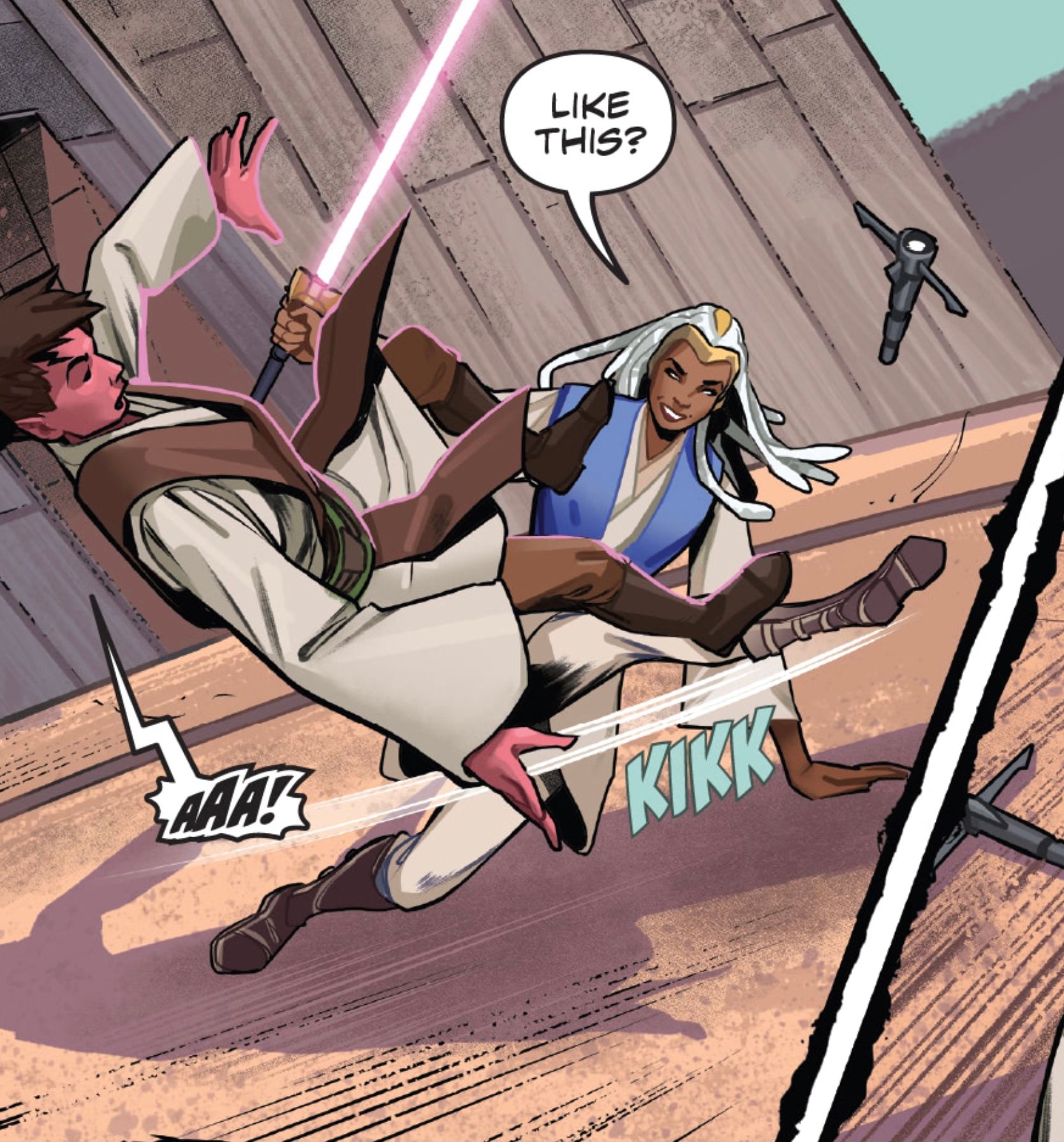 Canon notes out of the way, we learn Ty’s full name is Tylera. She’s sparring with a Padawan named Terradine, who teases her about her predictability. The moment turns when her master, Cibaba, arrives and reassures Ty she should stay on her own path. Likely a precursor for her eventual departure. The present events have stirred up the past for Ty and Scott uses this opportunity to slowly stitch together Ty’s time as a Padawan, likely headed toward the catalyst of her departure. 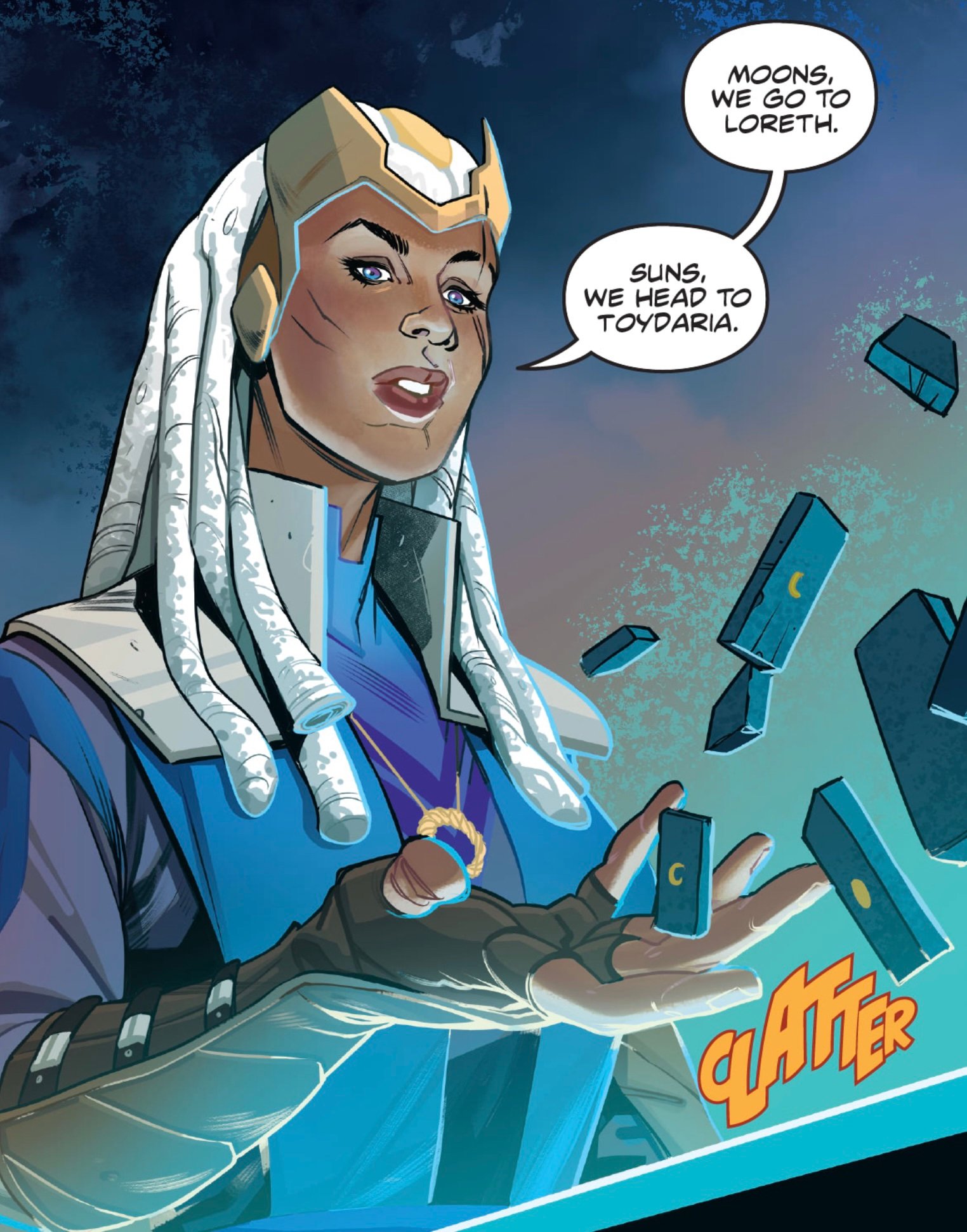 We also learn Ty uses a mysterious set of stones to guide her decision making process. Supposing these are somehow connected to the Force, I love experiencing different mediums to touch that cosmic power. Now, she’s trying to decide whether to accept a contract from the same village in the opening pages. We’ll likely be getting more backstory about why Ty uses these but it’s a nice seed to plant for future stories. In case you haven’t been paying attention, the art from Rachel Stott, Vita Efremova, and Nicola Righi is sublime. This issue is vibrant as it is mysterious, with a dreamlike uncertainty in every frame.

The stones lead Ty to Loreth, where she’s greeted by two villagers who show her this cave. Early settlers of the planet warned those who would follow with cave paintings of the monster, called the gretalax. As the villagers recall what happened to them, Pela, the young girl fascinated with the Jedi, knocks over Ty, causing all of her stones to fall. When the gretalax attacked, it unleashed toxic fumes, which burnt Pela’s vocal chords out. Her guardian says she hasn’t been the same since. 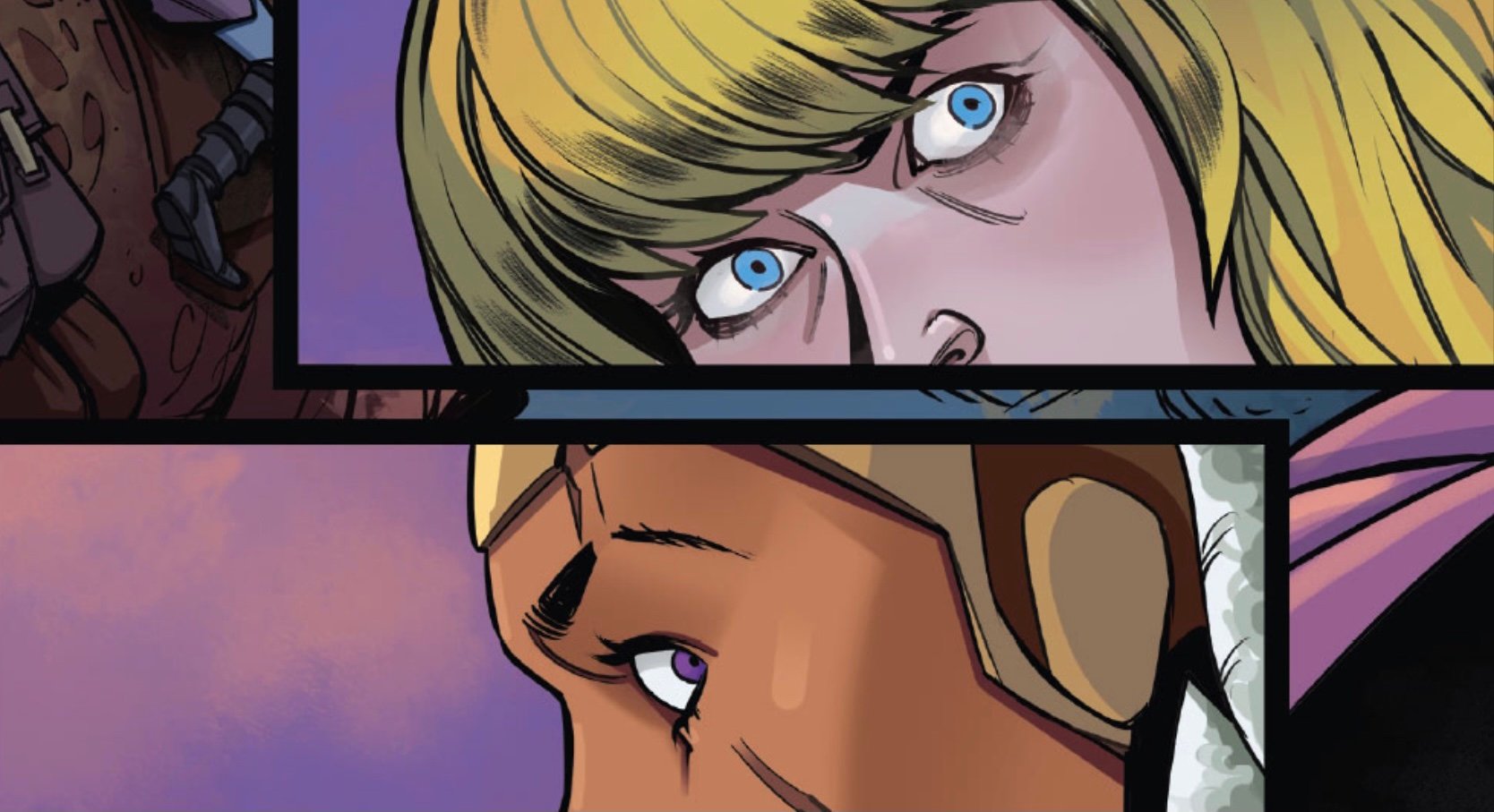 There seems to be a connection between Ty and Pela. Keeping this cell in my memory, as Pela’s interest in the Jedi suggests she may have some Force connectivity herself. As Ty rides out of the village and for Temple Peak in the mountainous region, another Padawan memory surfaces.

Well, Ty and her Padawan friend, first name Klias, appear to be closer than we know. Like other High Republic stories, we’ve learned Padawans have a bit more wavelength to explore romantic inclinations at a younger age. The rigid, monastic expectations don’t seem to set in until Jedi status is attained. Very interesting to add a potential love story into Ty’s Padawan days. I’ll keep my speculation in check but Cavan Scott seems to be itching to tell a Jedi love story. Other than the more intimate feelings shared between Padawans, we learn the two of them set out for a mountain facility called a Yallow Sanctum, a sanctuary for an order of dark side users. Bookmark that name, as Scott doesn’t lay down canonical breadcrumbs lightly. 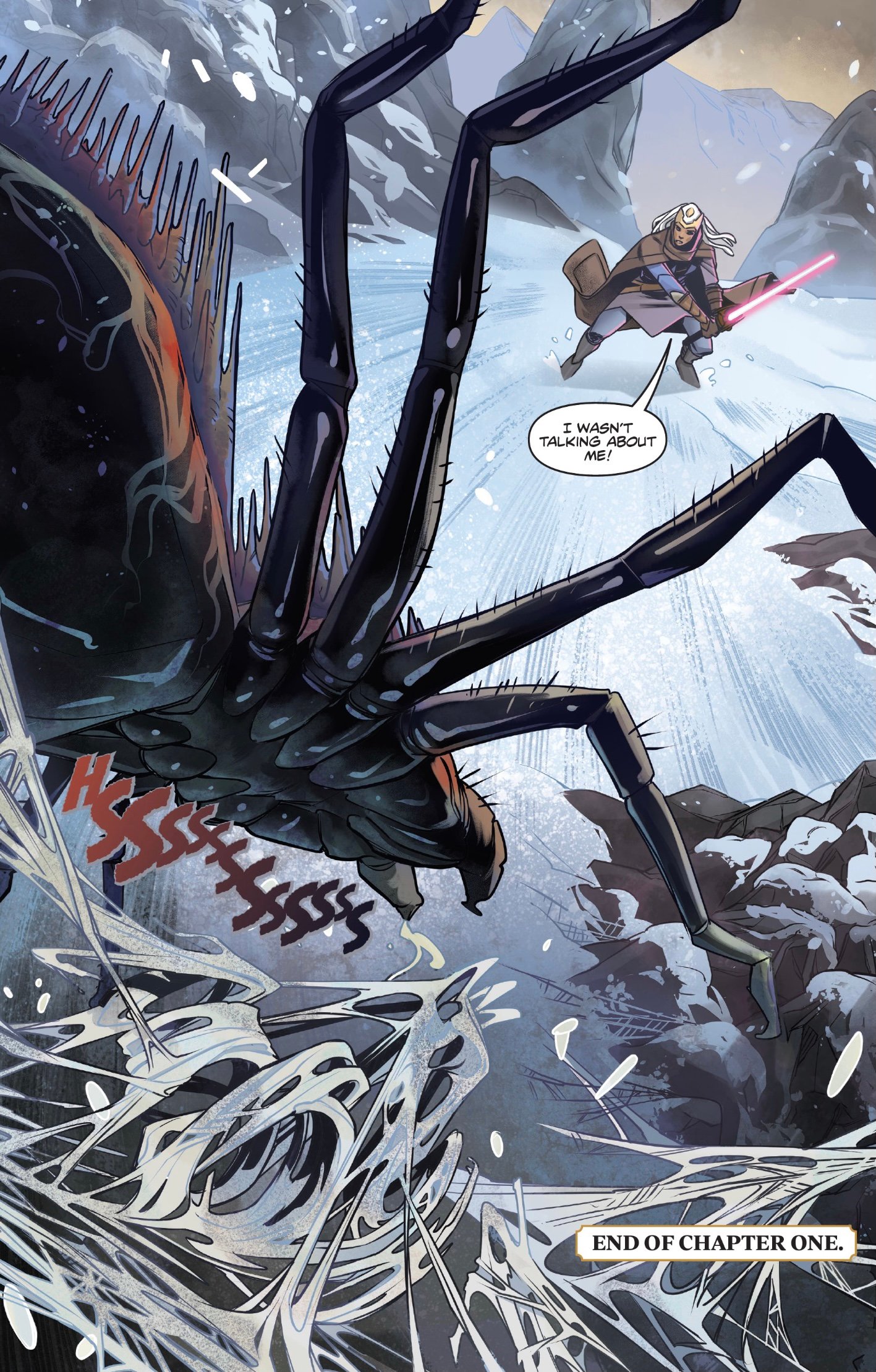 Ty’s arrived at Temple Peak. Following an invisible creature she’s stumbled into a web of trouble. Though this arachnid looking creature is trouble, it doesn’t appear to be the gretalax. Looks like Ty will have a lot of monsters to deal with before she gets to her bounty.

Solid first issue from Cavan Scott and Rachel Stott! The art and writing work great together, keeping the action grounded not to overshadow what the writing establishes. Though the issue moves pretty quick, it feels streamlined, setting up just enough to keep me excited for the second issue. Scott continues to use every opportunity to build upon what’s come before while setting up more for future stories. The cohesiveness of every High Republic story connection is impressive and doesn’t diminish the individual plot. I’m so happy we are getting more Ty Yorrick! 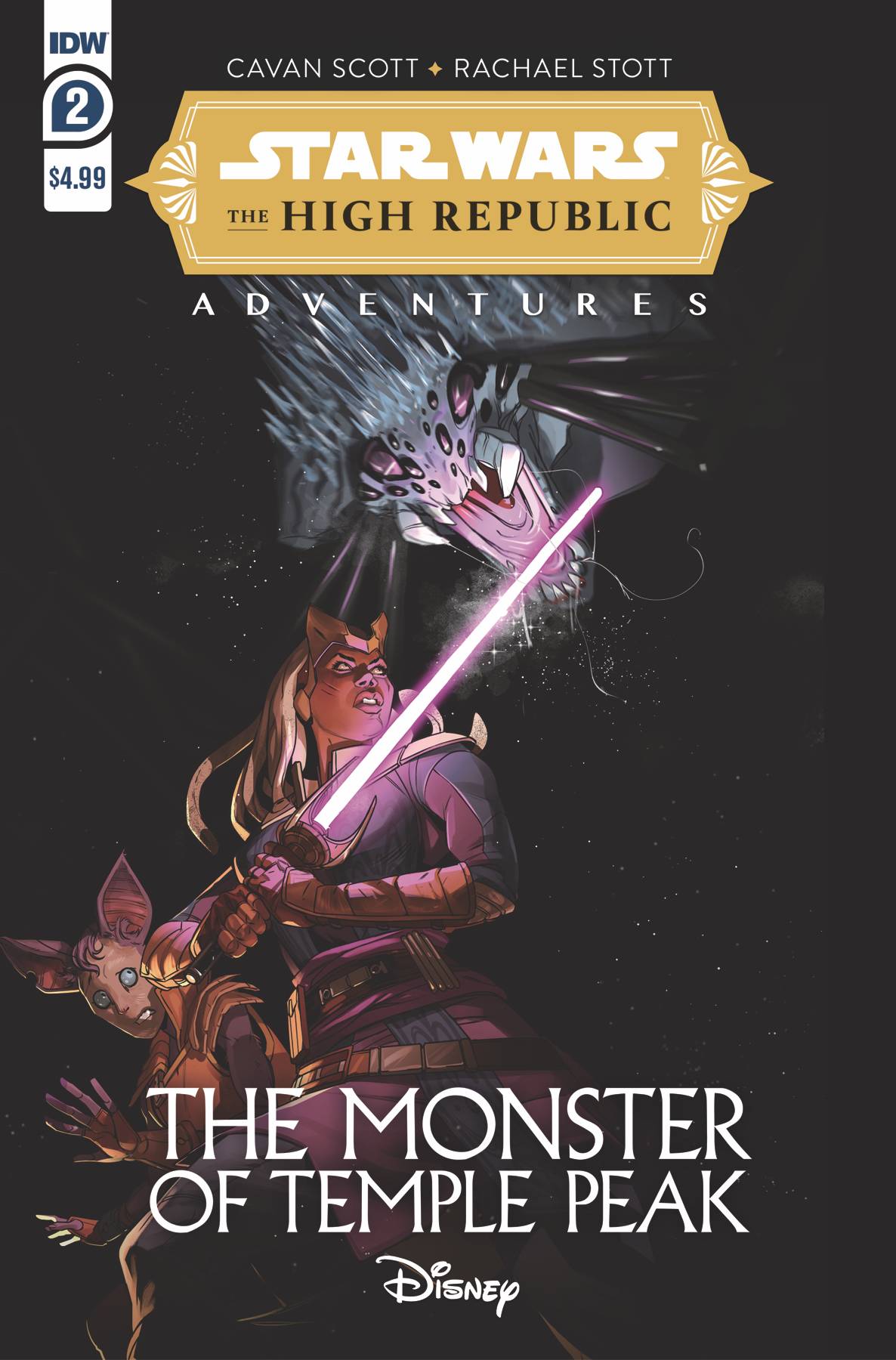