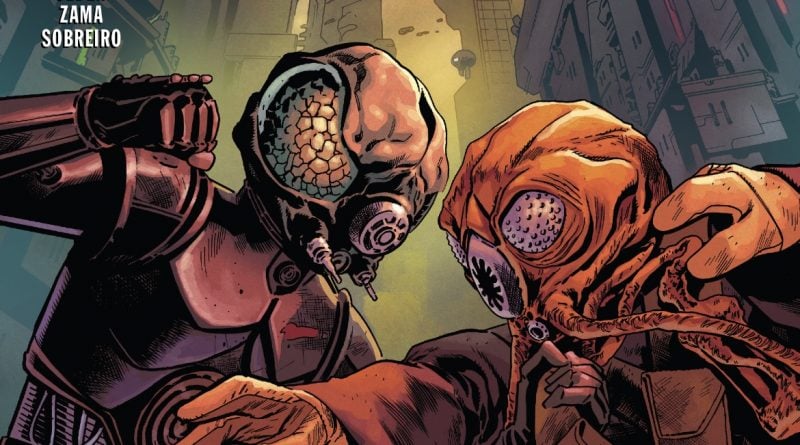 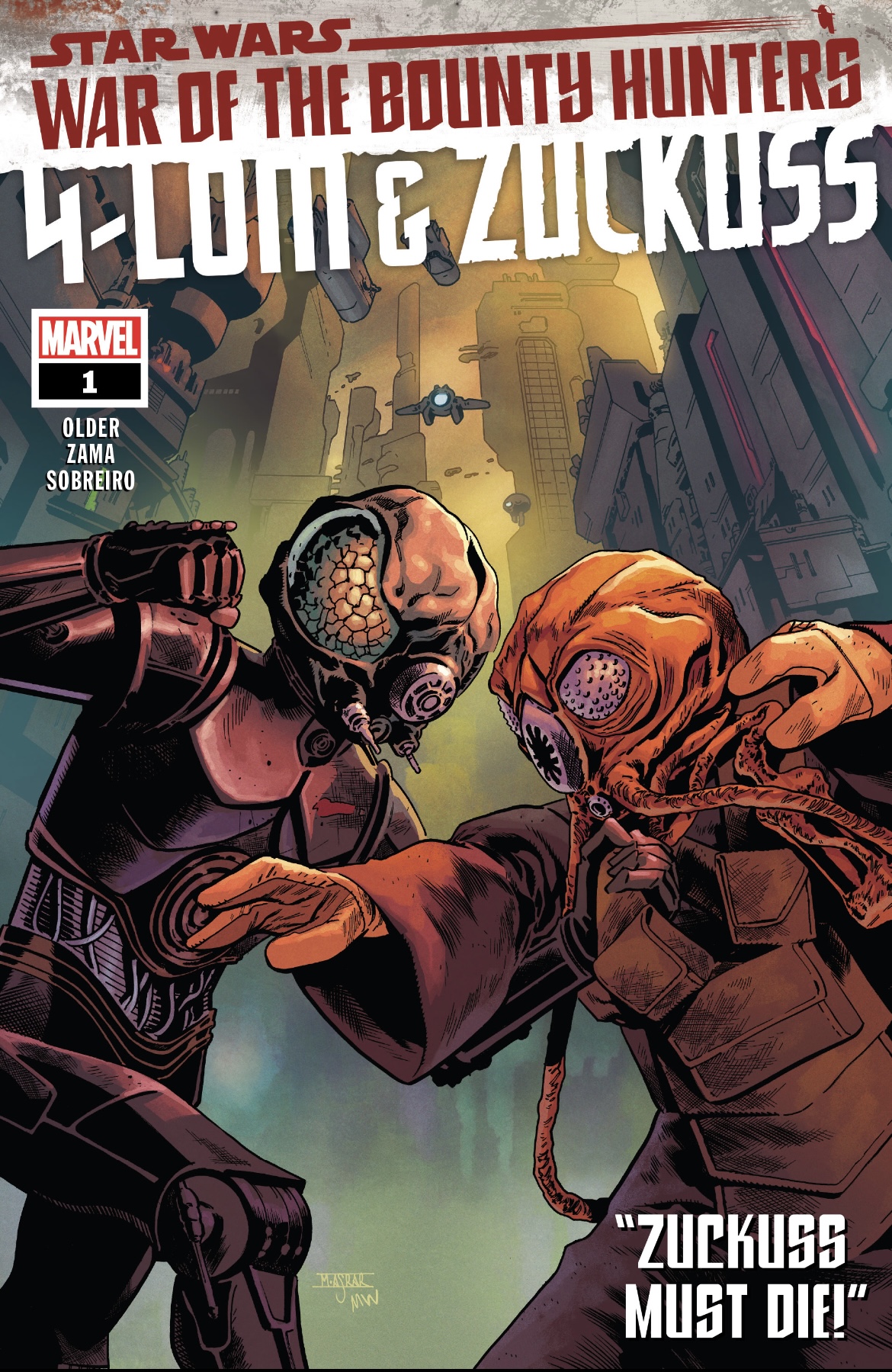 I hope you’ve been keeping up with War of the Bounty Hunters because Marvel and Star Wars aren’t relenting. It’s taken over all the ongoing titles (save The High Republic) and we also get supplemental issues like these. 4-Lom and Zuckuss fans, this is your week. Most fans would be forgiven for saying, “Who?“. A couple of bounty hunters who went looking for Han Solo on Vader’s orders and now find themselves in the thick of the search for Boba Fett, who’s claimed the bounty. Writer Daniel José Older provides plenty of backstory to how this partnership and friendship came to be, as well as where it’s going. SPOILERS AHEAD…. 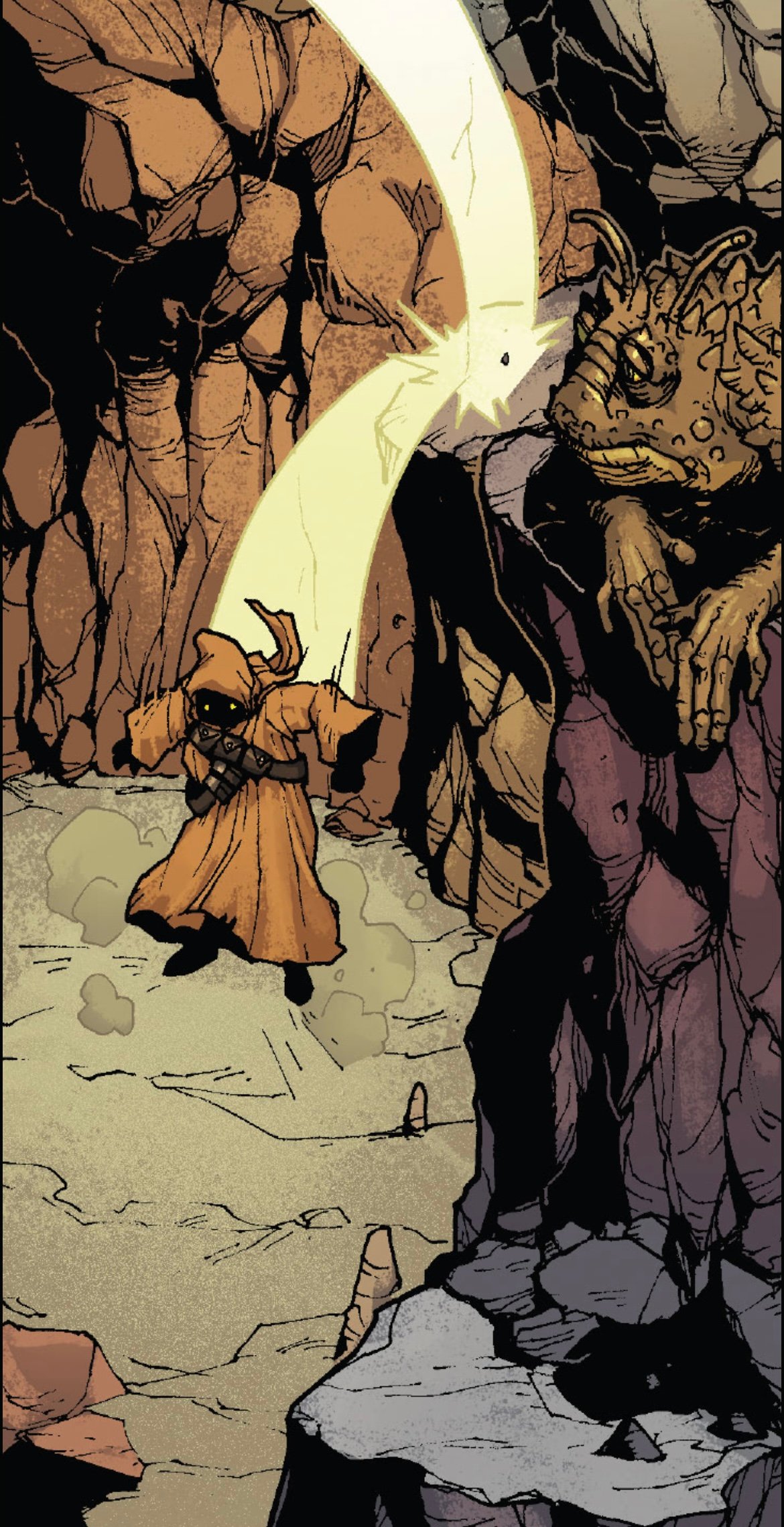 This story begins on Tatooine, with a group of scavengers stumbling upon something huge. What it is? We don’t know but the Jawa immediately makes communication with someone who might be interested. This issue jumps between past and present, trying to flesh out everything leading to this moment. War of the Bounty Hunters isn’t very forgiving if you’ve missed an issue so I wouldn’t recommend jumping into this story unless you are up to date. I’ve kept current and had trouble following along.

Zuckuss arrives in a drinking hole on Nar Shadda, with a hazy memory of a Boba Fett encounter. He learns in the conflict 4-Lom was disintegrated. For Zuckuss, this is a tragedy which invokes memories of how his partnership and friendship with 4-Lom came to be. This story jumped into flashbacks so quick I barely had time to realize where we were. Unfortunately, this structure causes a solid story to read a bit wobbly, in my opinion. 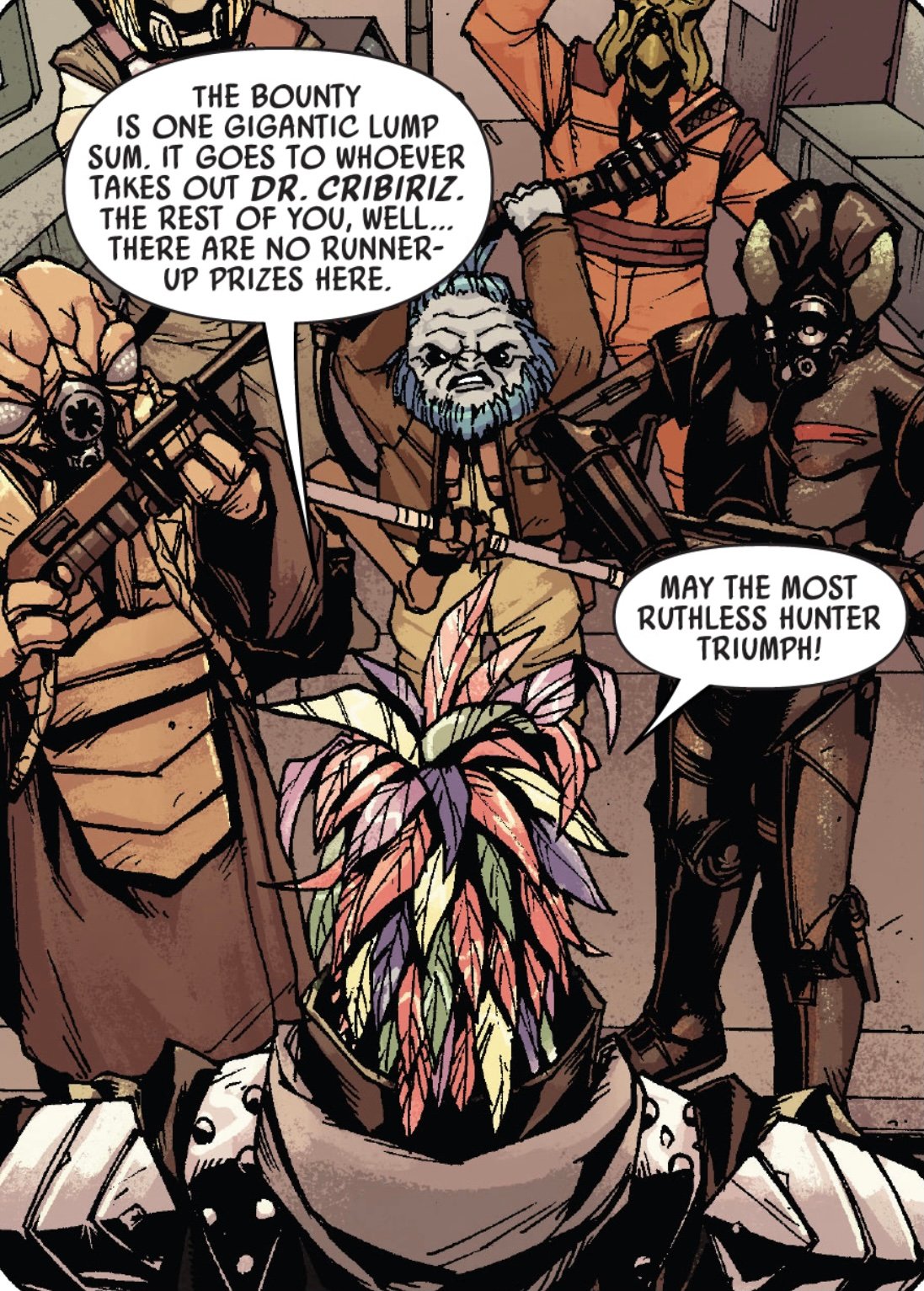 Zuckuss and 4-Lom met while working for the avian-esque Deva Lompop, pursuing a bounty on a well protected Dr. Cribiriz. More bounty hunters. Another complaint of mine: This event feels crowded. While this rapid succession of new characters can be done well, here it just distracts from the two already obscure characters this issue sets out to elaborate on. I love Older’s writing but this felt like it could’ve been more streamlined, rather than dropping in more names and characters who quickly vanish in the backstory of a backstory. 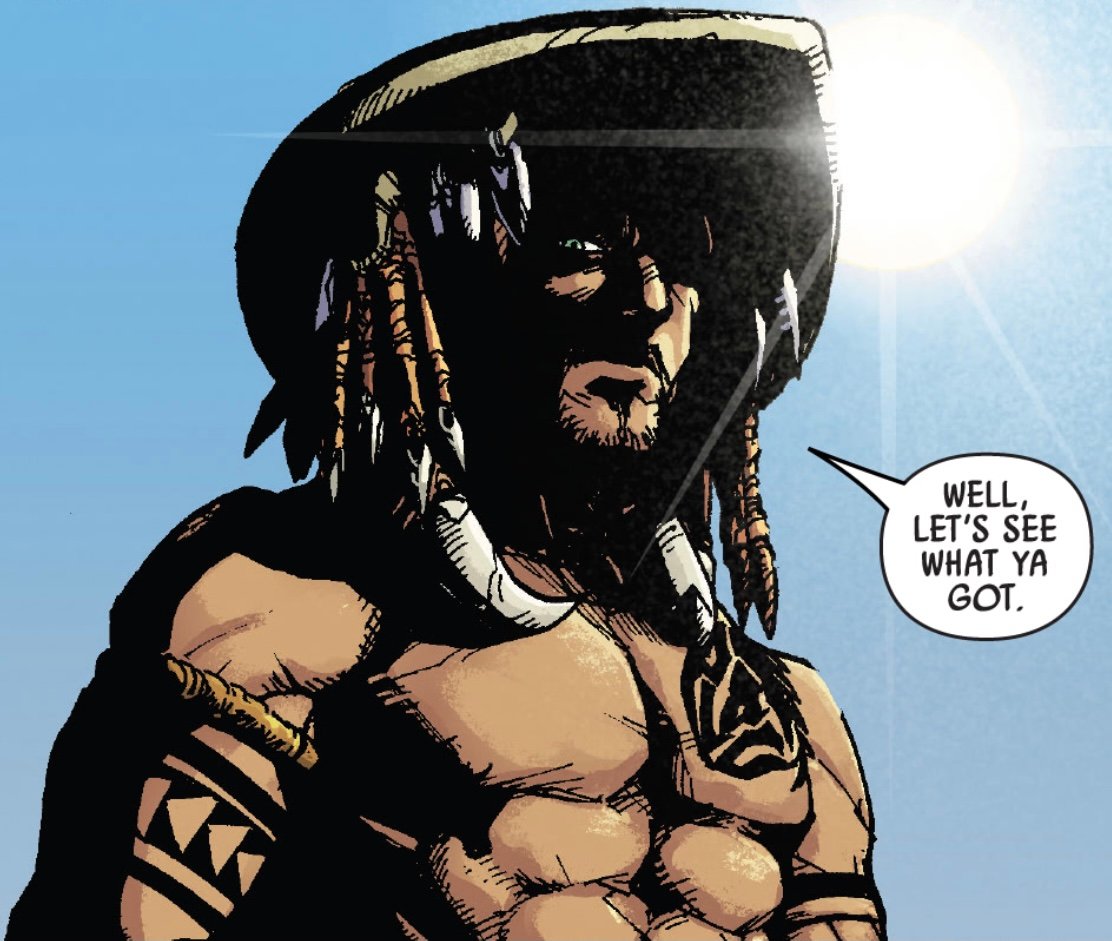 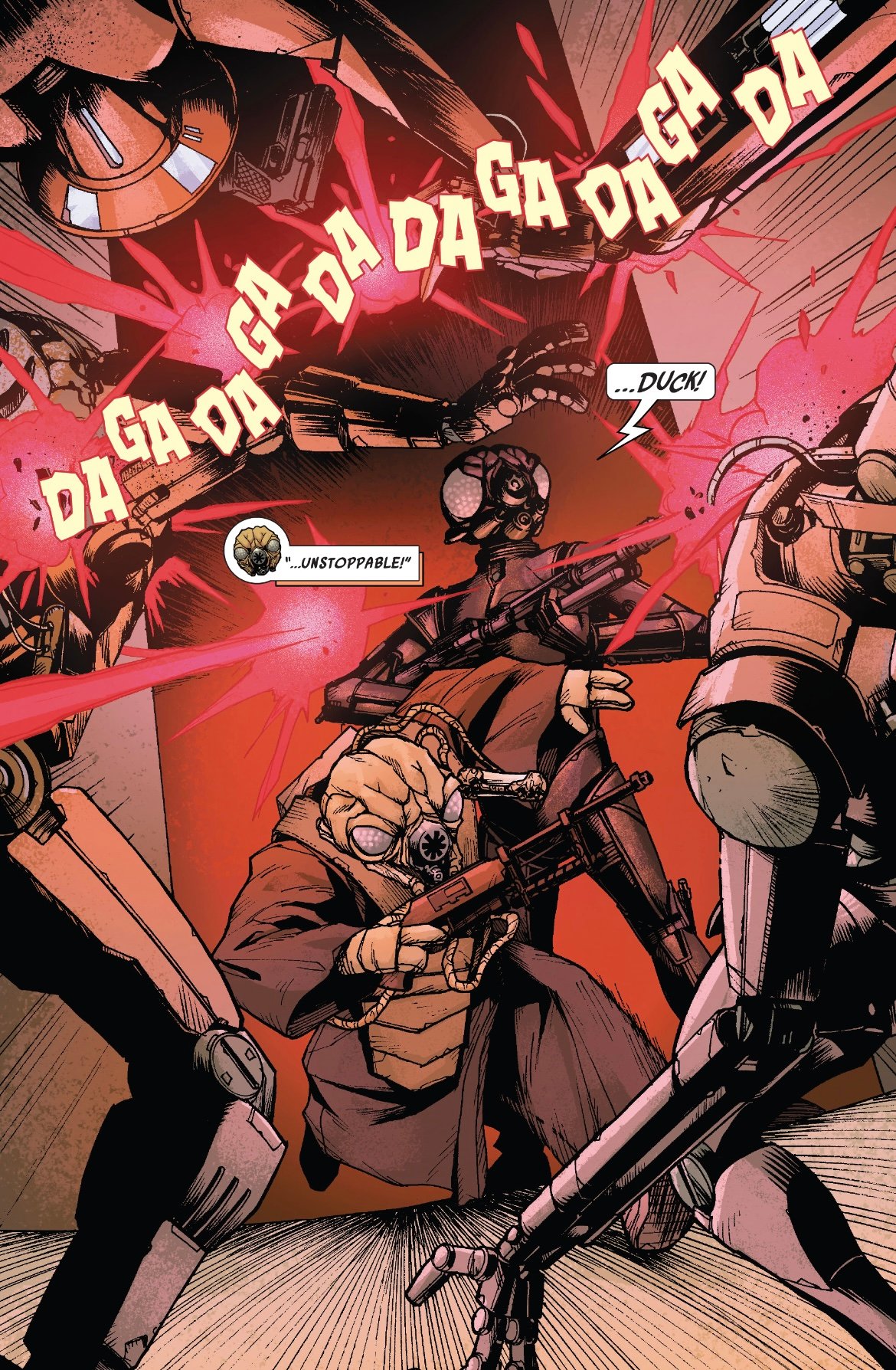 After being interrupted by another bounty hunting duo blasting their way around Nar Shadda, Zuckuss recalls his own partnership of doing the same. When they finally caught up with their bounty, Dr. Cribiriz, they didn’t bother taking him in alive. Well, it looks like their work wasn’t quite as handy as Zuckuss remembers. 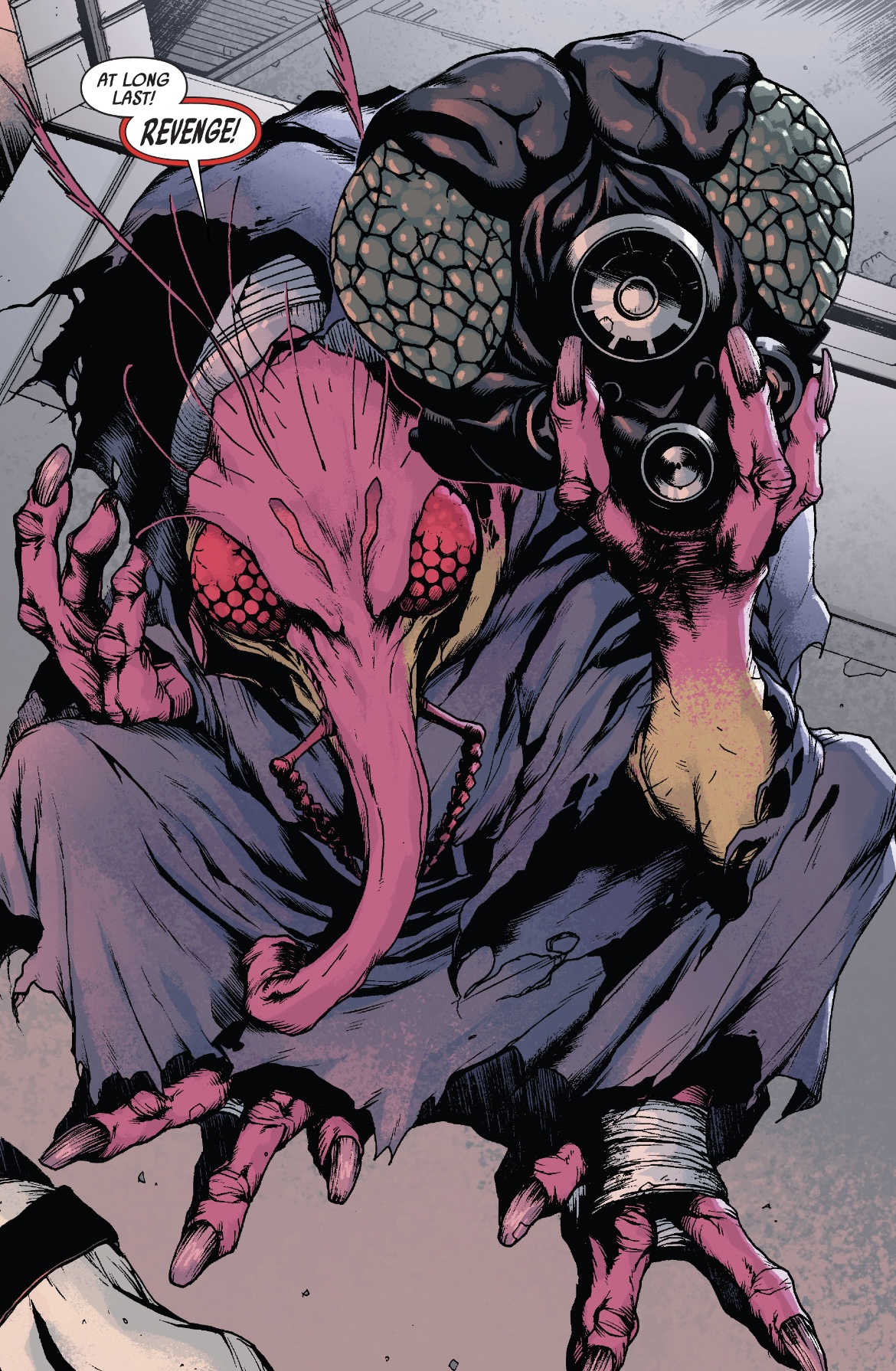 Dr. Cribiriz lives, apparently. The dead speak! And he’s the anxious buyer of 4-Lom’s head, which the Jawa in the beginning of this issue found in the desert of Tatooine. How are you doing keeping track of all these new characters? This reviewer is cursing them all. The doctor is after revenge and he’s figured out a way. Reprogram 4-Lom, turn him into a giant spider droid, and unleash him against Zuckuss. Revenge is a dish best served on eight legs, I guess.

Zuckuss is devastated his friend is trying to kill him. So devastated he’s resigned himself to die instead of turning against 4-Lom. It’s really sweet but doesn’t have the weight I feel Older intended because we’ve been skipping around so many different threads. Before Zuckuss is sacrificed for this reborn 4-Lom, another bounty hunter intervenes, disabling the arachnid phoenix. It’s not that simple though and as the crew of bounty hunters work on disabling 4-Lom, Zuckuss searches for whoever created this nightmare version of his old friend. 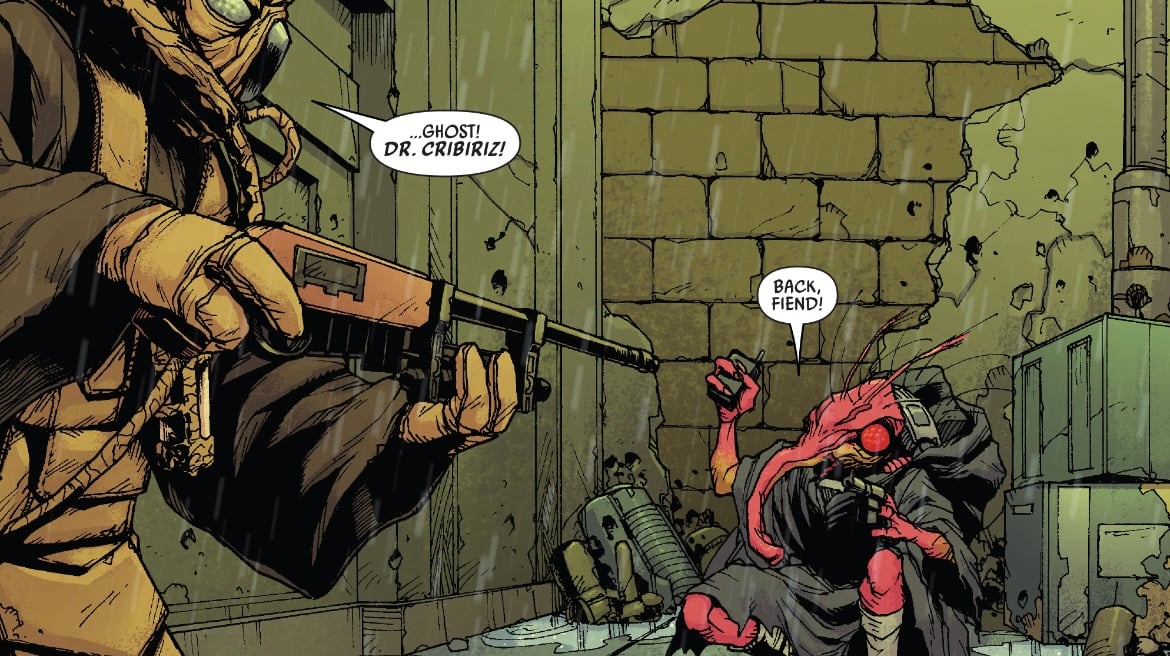 Ready for a plot twist? It was actually his brother who Zuckuss and 4-Lom killed! And even though Dr. Cribiriz goes into a long diatribe about how he used his brother as a body double and they didn’t have a great relationship, for some reason, he wants revenge. Yeah, we are getting close to the edge of the rails here. After hearing the tale, Zuckuss blasts the doctor and ends his self-perpetuated saga. Zuckuss is able to retrieve the control pad and disable 4-Lom instead of being forced to destroy him. 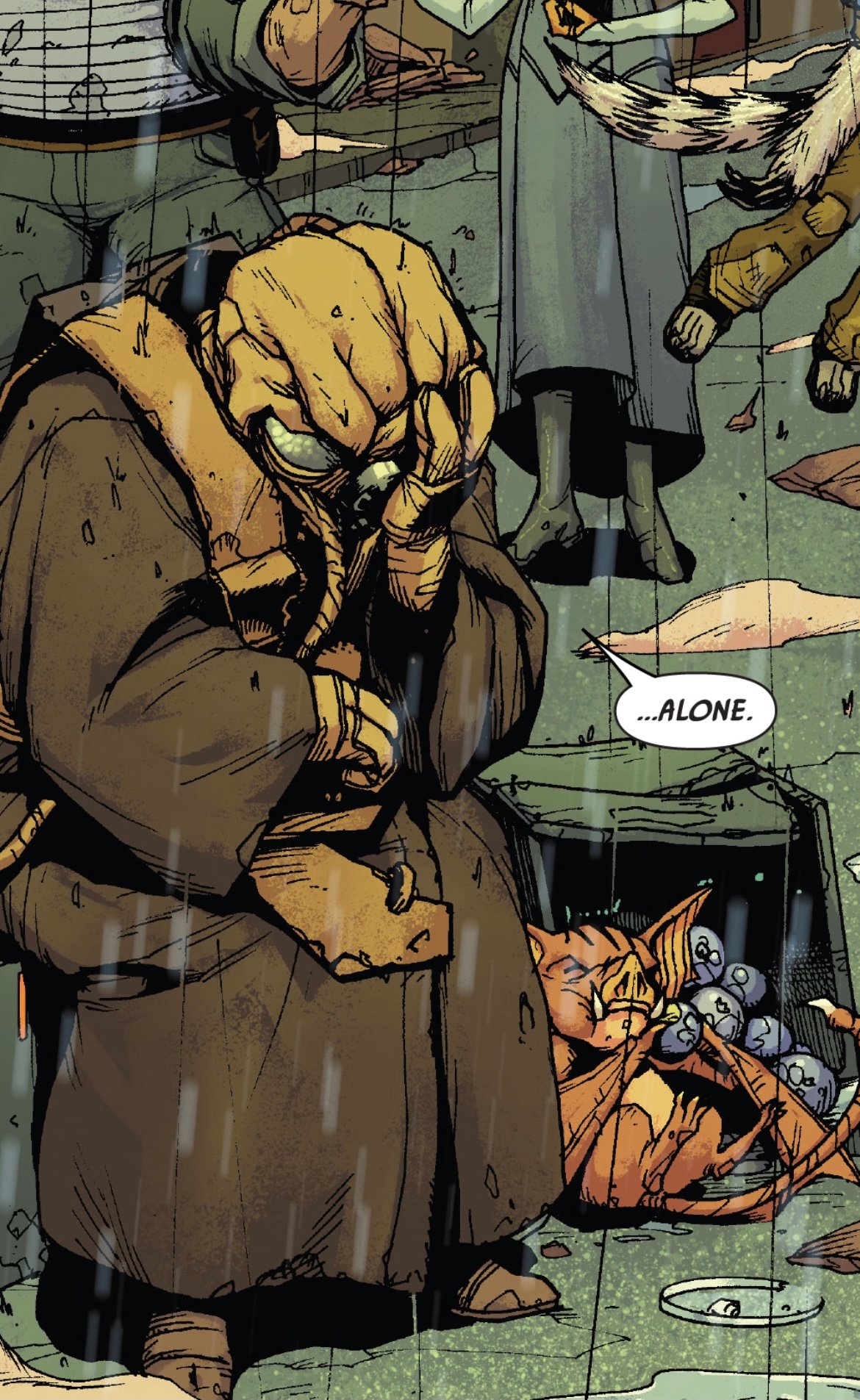 4-Lom disappears into a back alley of Nar Shadda, leaving behind his old friend, Zuckuss. Once working in tandem, Zuckuss is now alone.

My guess is this reborn 4-Lom will be causing trouble for someone down the road in War of the Bounty Hunter but….was this issue really necessary? I’m prepared to eat my words if there is a huge payoff. Admittedly, I’ve been pretty vocal about growing tired of this event, so if you’ve been enjoying it you’ll probably feel different. Daniel José Older is one of my favorite writers working in Star Wars, which is why this issue felt like a letdown. It seemed like all the right pieces were there, they just didn’t fall into place. The art by artists Kei Zama and Felipe Sobreiro is pretty good, so it was a fun story to look at. 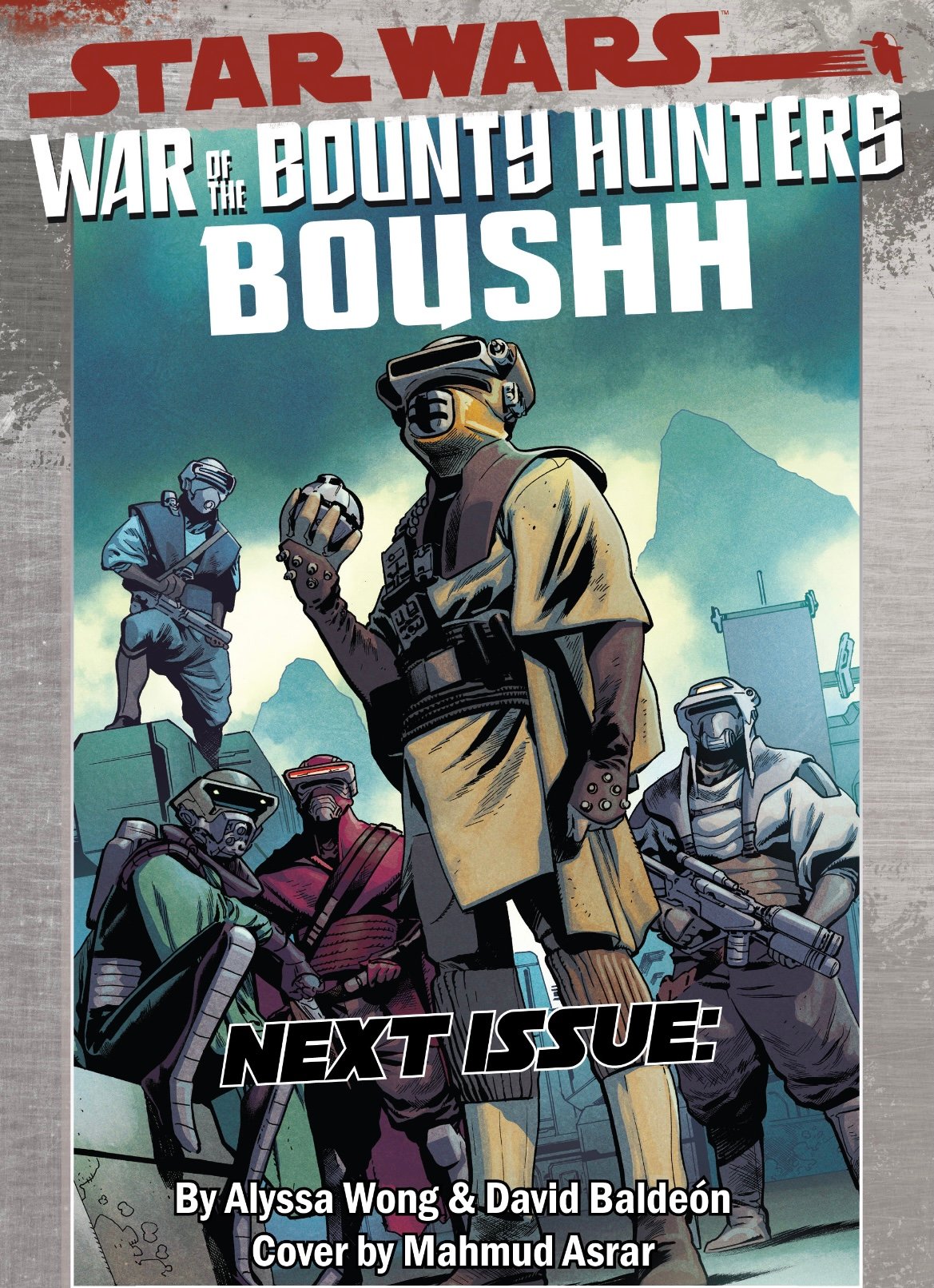 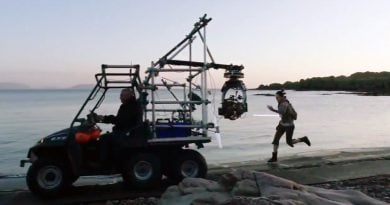 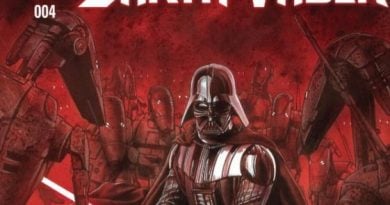