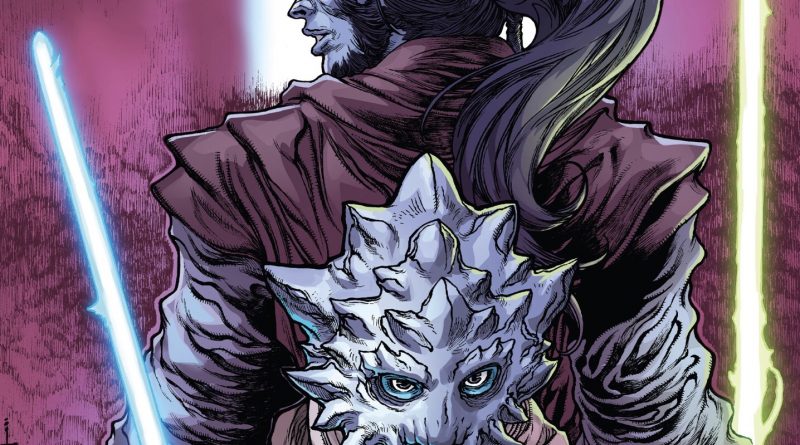 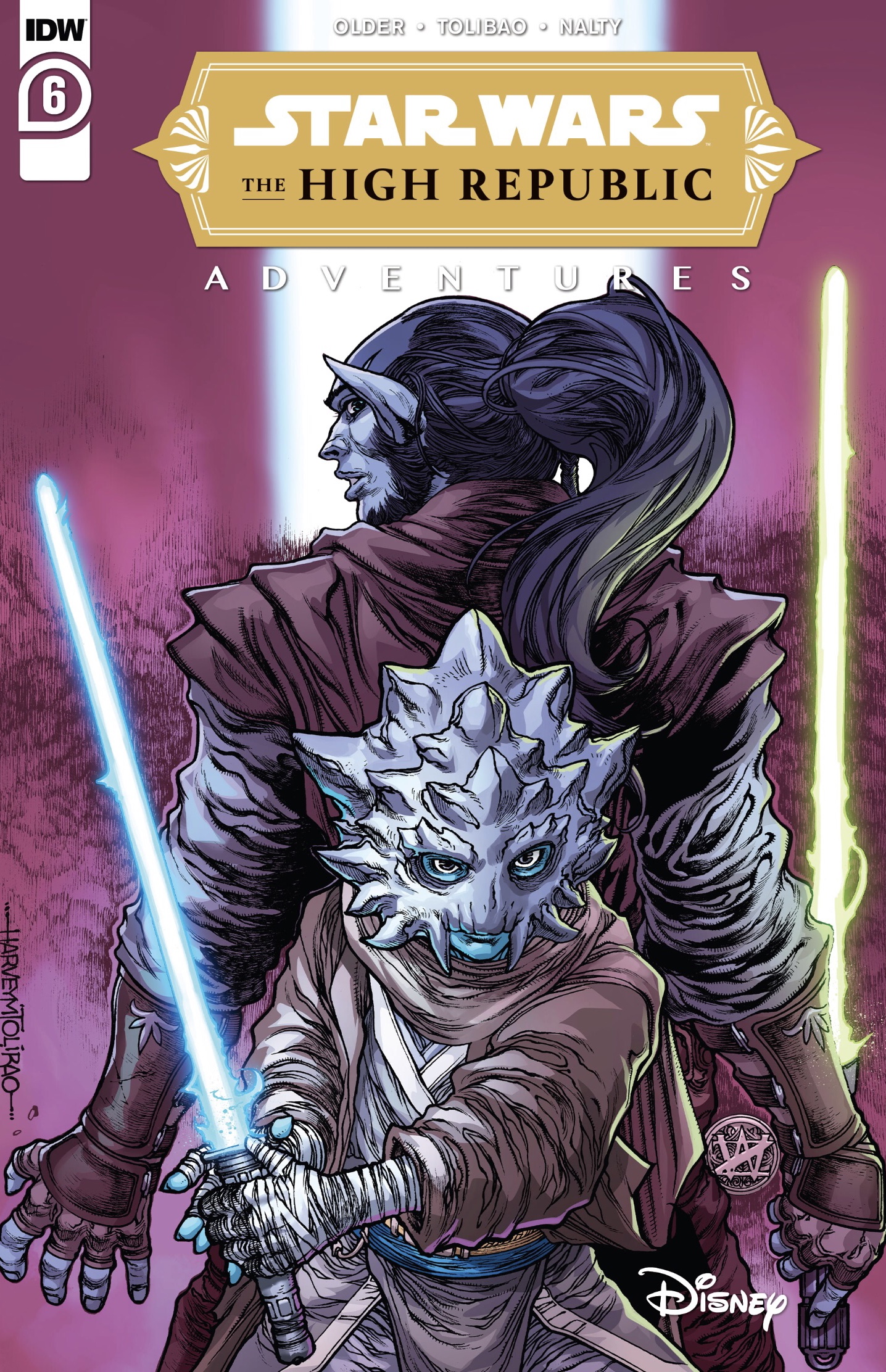 Writer Daniel José Older shifts to a different part of the galaxy this week in IDW’s The High Republic Adventures #6. Padawans make their way to Nal Hutta, fostering the necessary alliance between the Jedi Order and crime syndicate. In Cavan Scott’s The High Republic (Marvel), Jedi Master Avar Kriss fought with the Hutts to keep the Drengir at bay. The Drengir continue to spread across the galaxy and the Jedi need the Hutts to stay in the fight. SPOILERS AHEAD….

The issue opens with Farazal recounting a tale of Master Tal Bota, the greatest Jedi ever. His powers are demonstrated in tales of him solely bringing down Sith legions of millennia’s past. The High Republic authors have been sprinkling canonical Sith and Jedi legends across the stories, planting seeds for future Star Wars stories. The fun part here is we actually get to see it through the art of Harvey Tolibao, Pow Rodrix, and Rebecca Nalty. Reality breaks through Farazal’s daydreams, back to his own time filled with its own dangers of the galaxy far, far away. 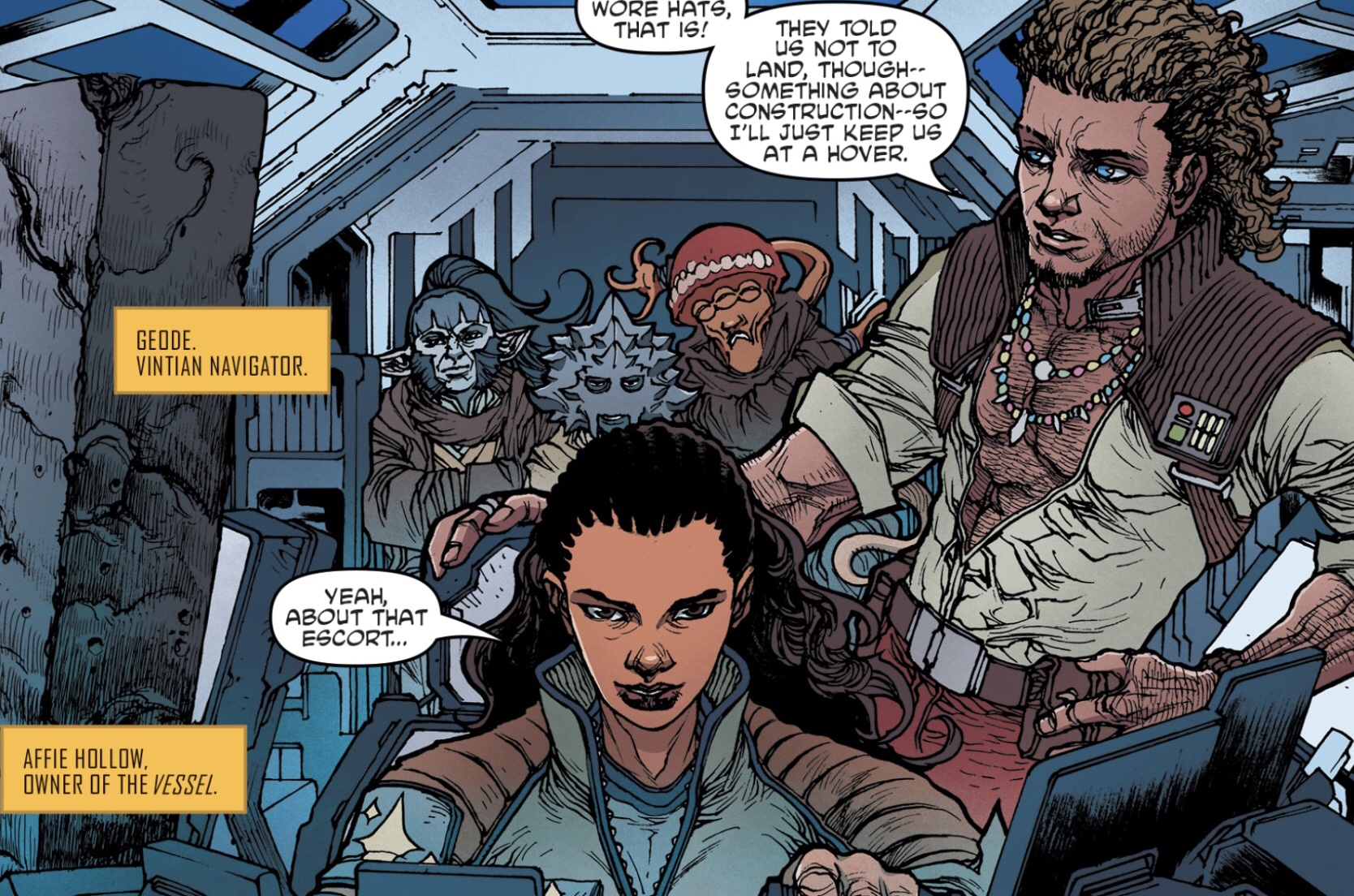 Welcome back to the Vessel. Returning from Claudia Gray’s Into the Dark are Affie Hollow, Leox Gyasi, and Geode. Great characters I’m excited to see again! After discovering they’d unknowingly been working for an organization doing the Nihil’s bidding, they’ve set out to ally themselves with those who stand against the terror spreading across the galaxy. We find the Vessel ferrying the Padawans and Jedi Master Orbatuk, who they discover has accidentally slipped into a hibernation. Unfortunately, it leaves on the Padawans to negotiate with the sinister Hutts awaiting them. 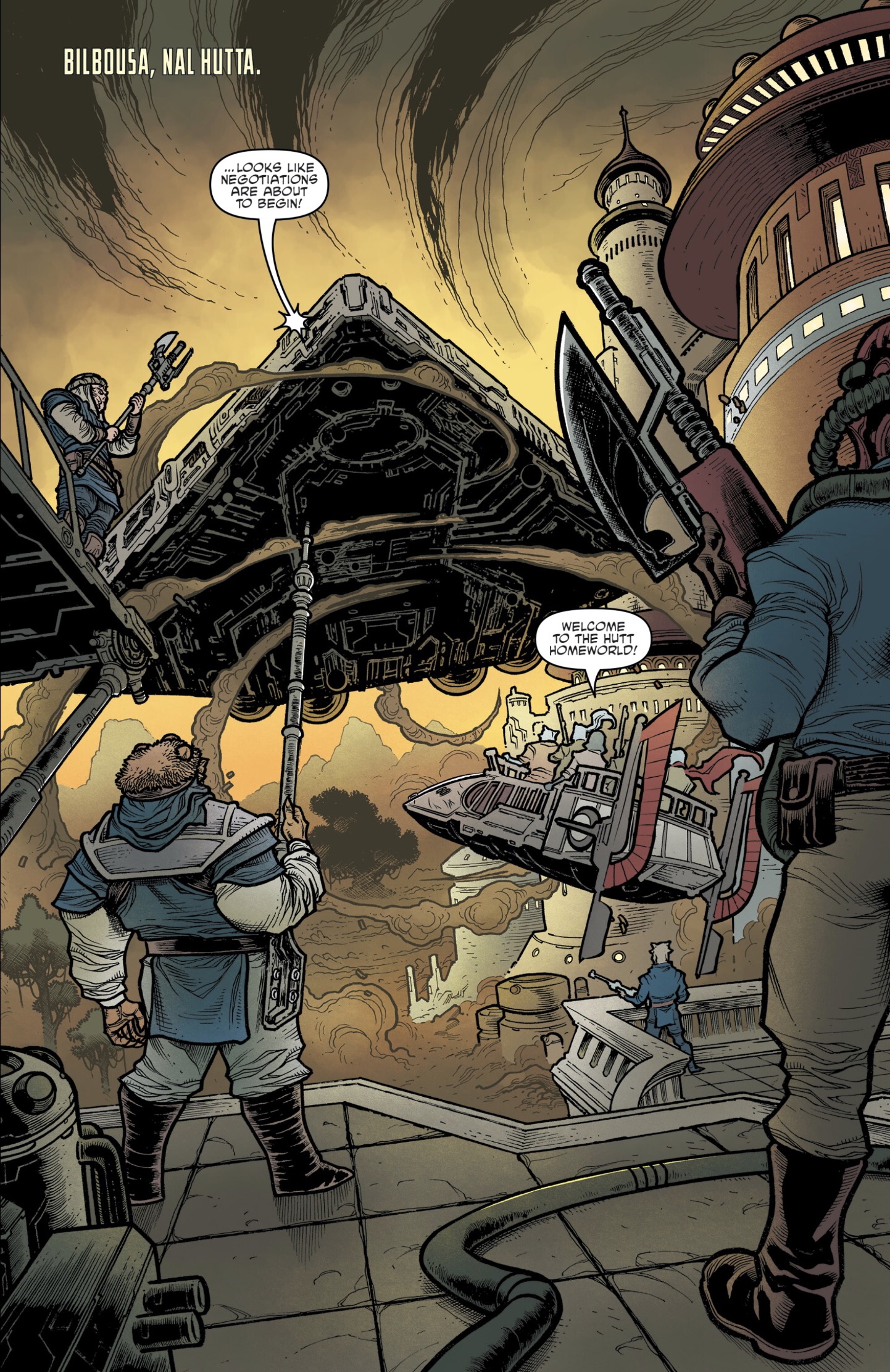 The reception on Nal Hutta is a bit chilly. Leox accompanies Farazal with the Hutt security force. They are ordered to turn over their weapons and head deeper into Nal Hutta without much assurance. Affie, Qort, and Geode stay behind. It will be interesting to learn more about the Hutt society, as their role seems to be prominent at the moment. 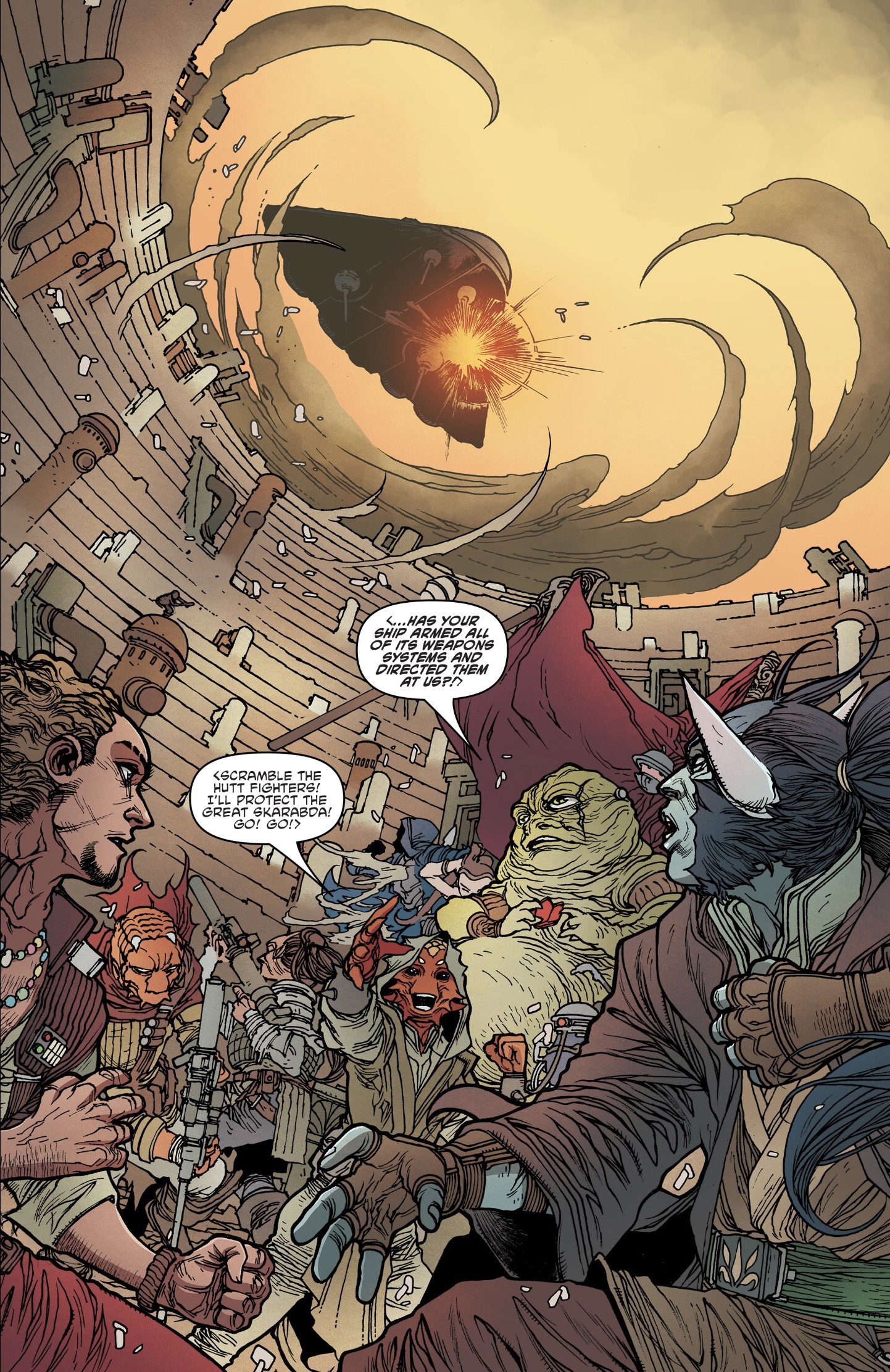 Skarabada the Hutt awaits, fulfilling her role as chief diplomat for the Hutt Clan. Don’t forget, for as much as they Hutts fight alongside the Jedi, they wreak their own share of havoc in the same territories as the Nihil. I’m very curious how this alliance will eventually disintegrate and we may be seeing the beginning of that here. Suddenly, the Vessel arrives over the horizon. Inexplicably, it’s canons begin firing on the Hutt-Jedi negotiations. Leox fleas and takes Farazal with him, concerned only with their survival. More like out of the pan and into the fire… 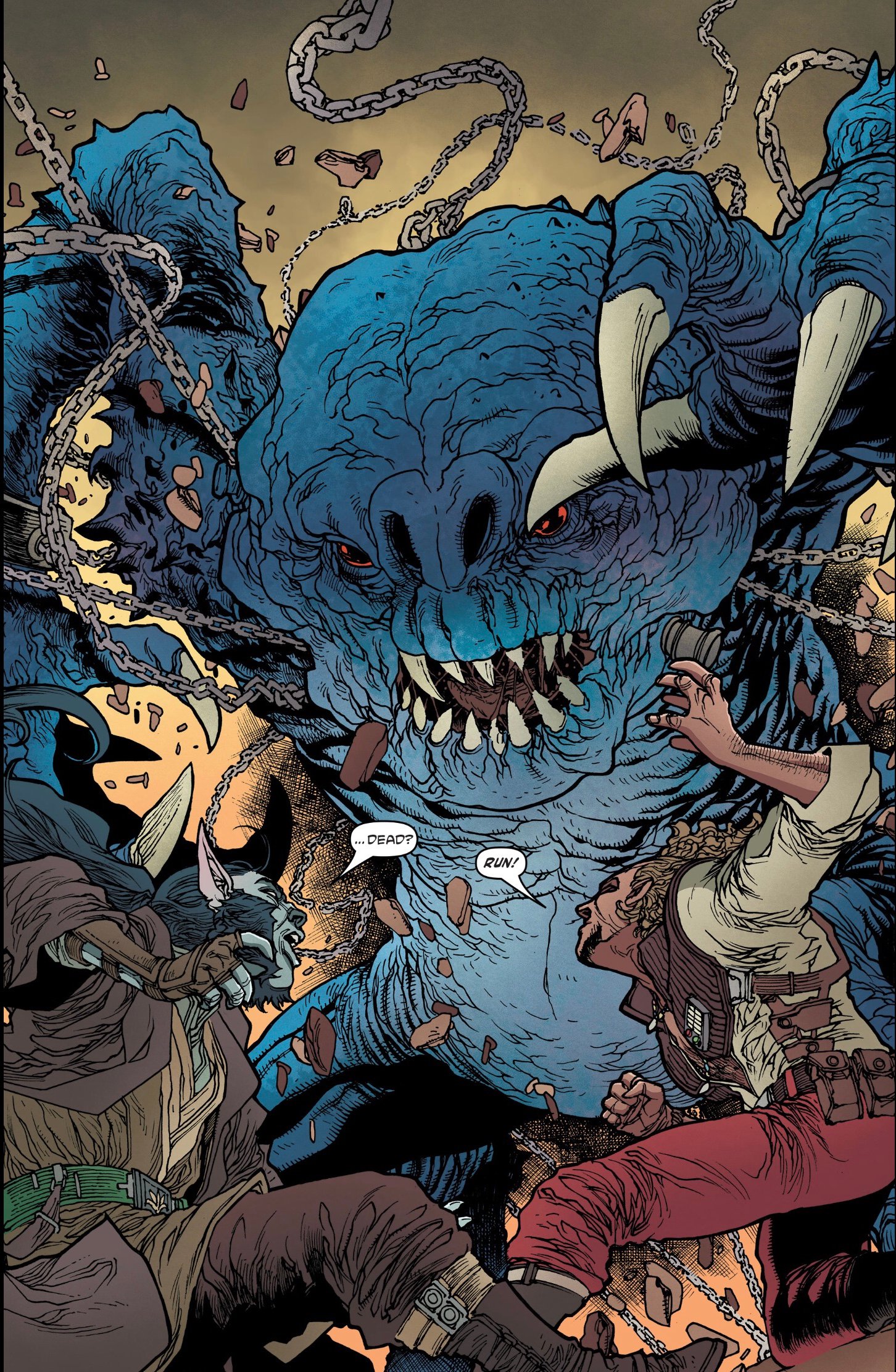 Looks like Jabba isn’t the only Hutt who keeps rancors for pets. Leox and Farazal are cornered. 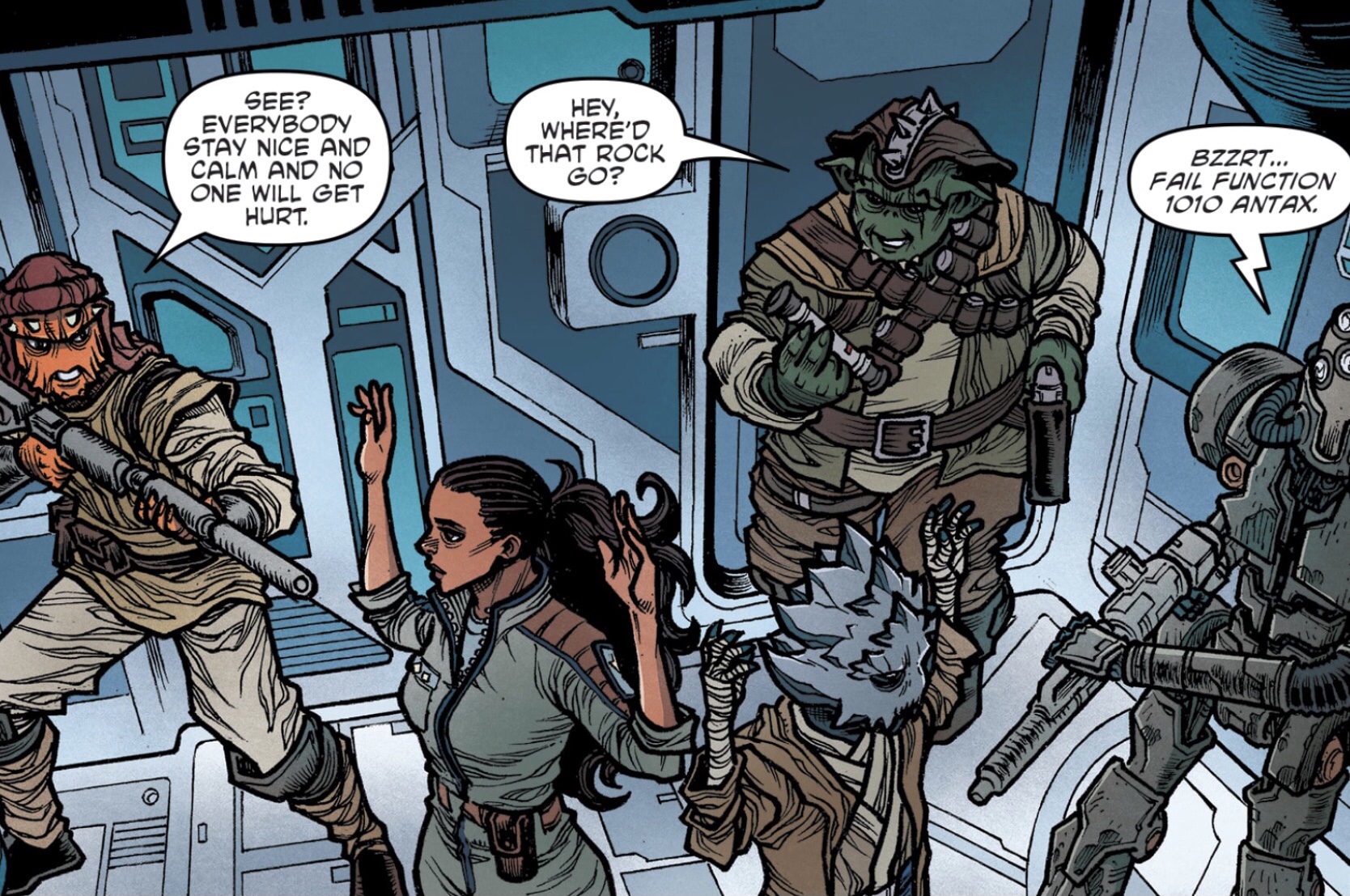 Meanwhile, aboard the Vessel, Affie and Qort are held at blaster point. The anonymous bandits are a little more than freaked out by Geode. They think the stone-being is cursed, as Geode takes control of the ship. The Hutt security fleet catches up with the ship, retaliating for the strike on their Hutt overlords. 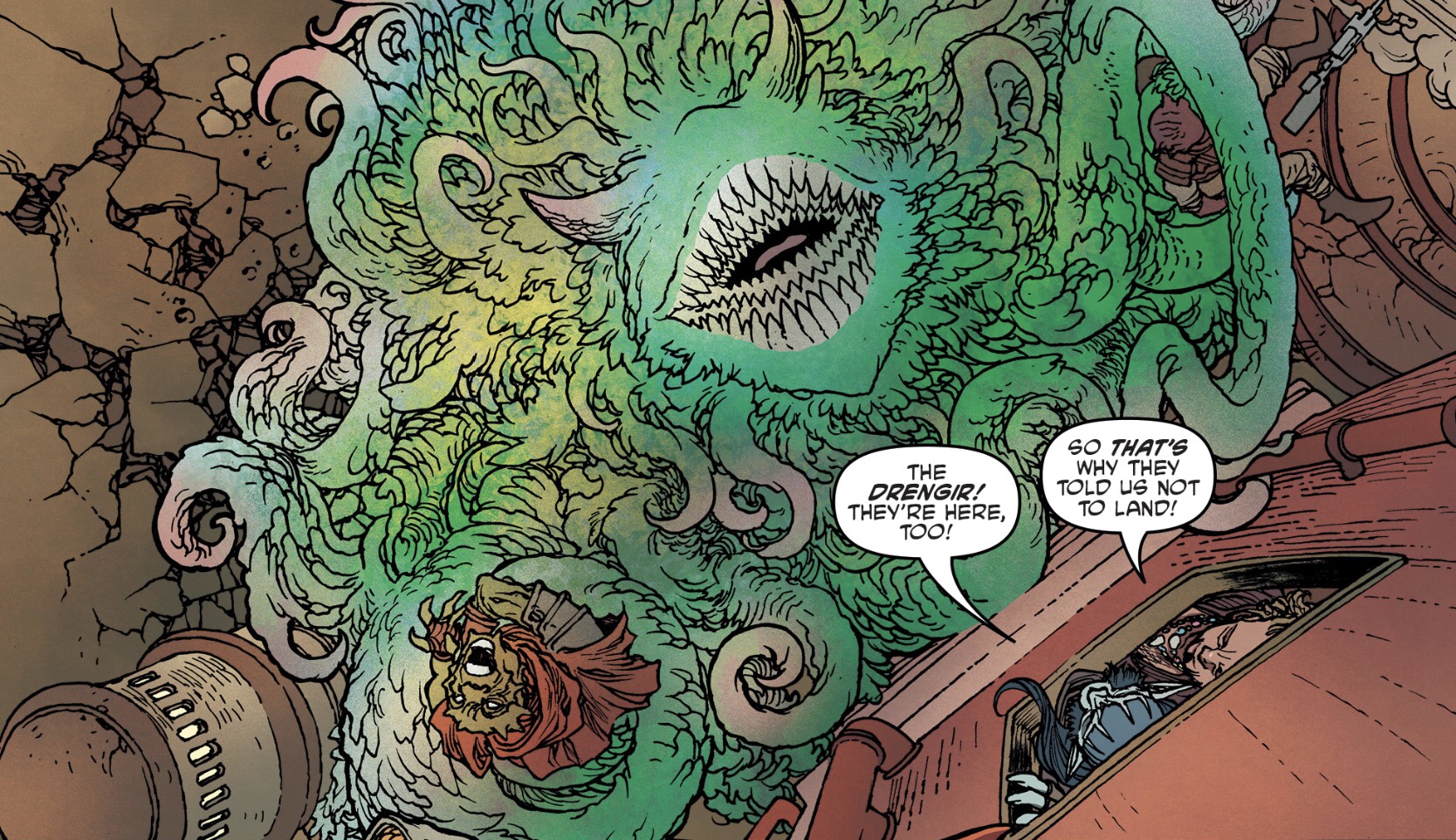 Leox and Farazal discover the Drengir have arrived on Nal Hutta. The Hutts kept this secret, likely to hide a weakness the Jedi could leverage in negotiations. They’ve managed to keep the Drengir contained, but now the Drengi unleash their violent tentacles, hunting for their meat. Farazal retrieves his lightsaber and fights his way out, leading Leox to safety. I’m a fan of this duo! Their escape is shortly lived, once again putting them in worse circumstances than the ones they fought out of.

The Hutt security force aren’t interested in any explanations. They promise to hold off on punishment until their investigation is complete but we know Hutts don’t have a reputation for treating their prisoners kindly. A dark cell awaits both Leox and Farazal. 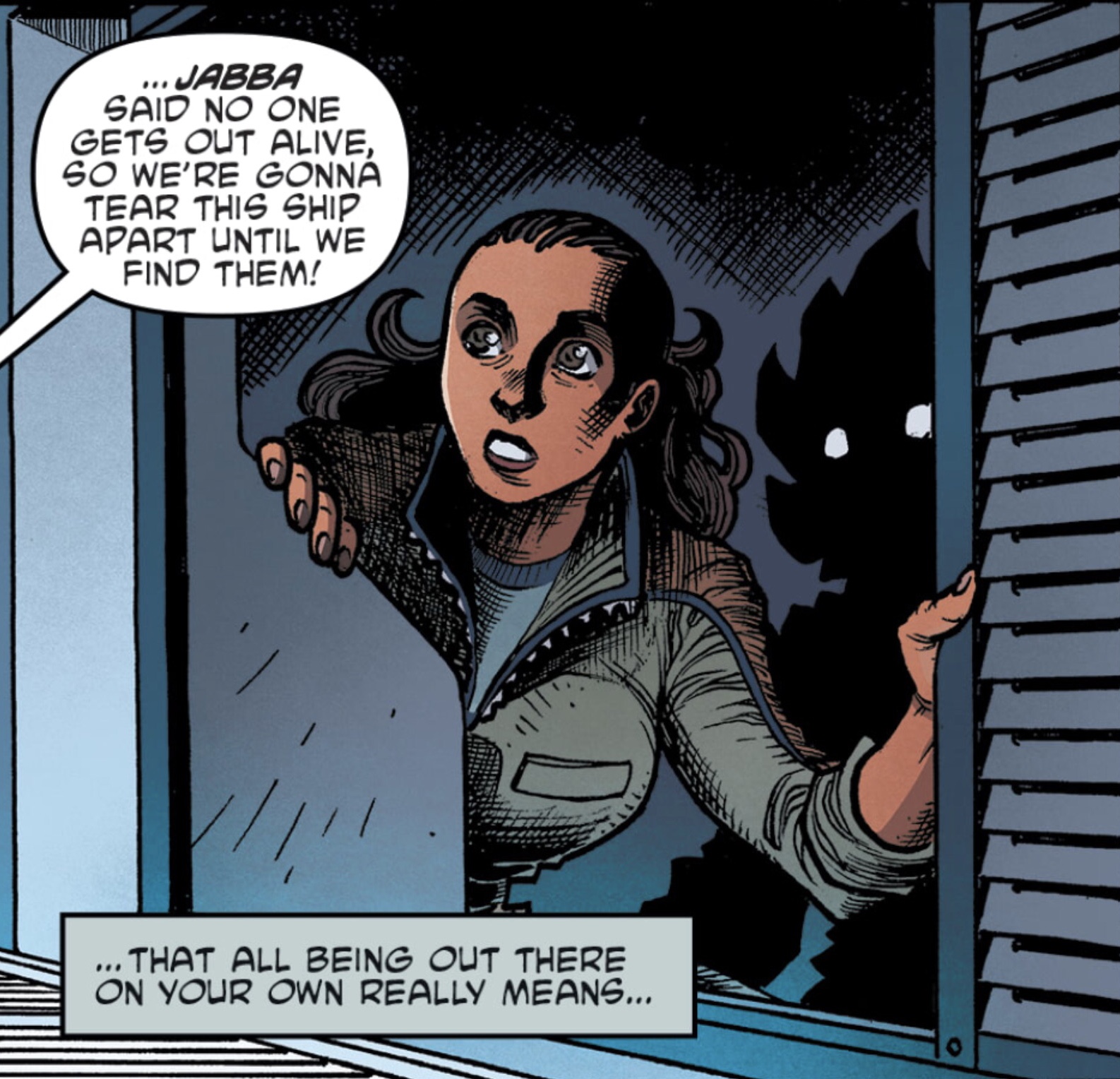 After Geode’s piloting skills save everyone aboard the Vessel, we learn who the hired guns answer to. Jabba the Hutt himself ordered the attack on the meeting between the Jedi and the Hutt Clan. We know at some point Jabba rose to the head of the clan and maybe we are seeing his first move against the hierarchy. We’ve also learned some of the Hutts have been trying to destabilize parts of the Outer Rim, hoping to keep the Republic busy so they don’t notice their illicit smuggling operations (not to mention bacta poaching). This is the first we’ve heard about Jabba’s involvement. Looking forward to learning more. 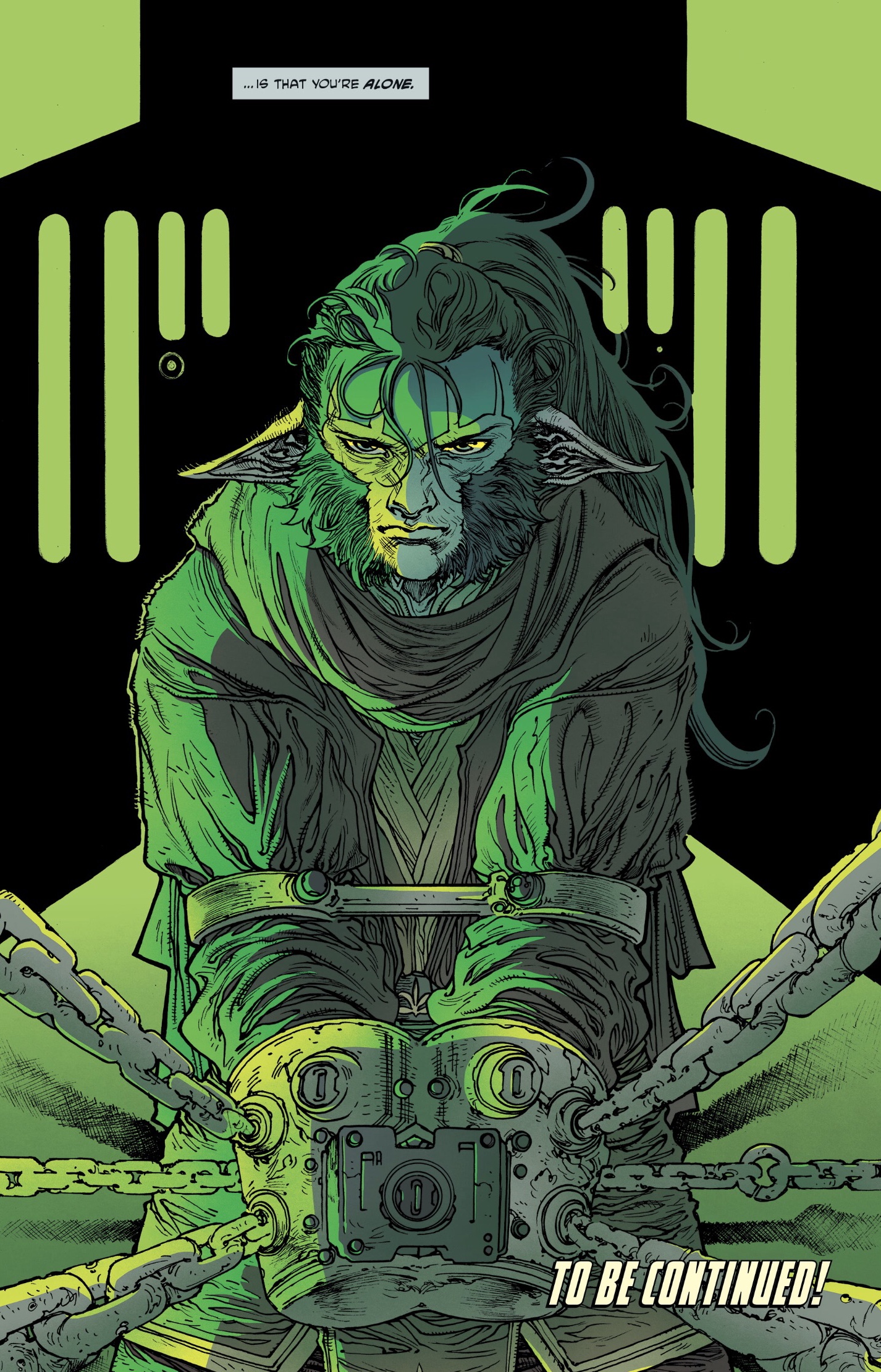 And I’m also very worried about Farazal and Leox. Hopefully Affie and Qort can regain control of the Vessel and come to the aid of their friends.

This is a great start to a new story. If you’re wondering what’s happening with Lula and Zeen, pick up a copy of Older’s excellent Race to Crashpoint Tower (or check out our Book Discussion). Giving Daniel José Older more runway to explore characters with these comics and novels is never a bad idea. Handing off the story to a new set of characters will keep this series fresh and I like that it’s not contained to one part of the galaxy. The art is great and I love seeing this world come to life in comics. This new era of Star Wars consistently impresses me. 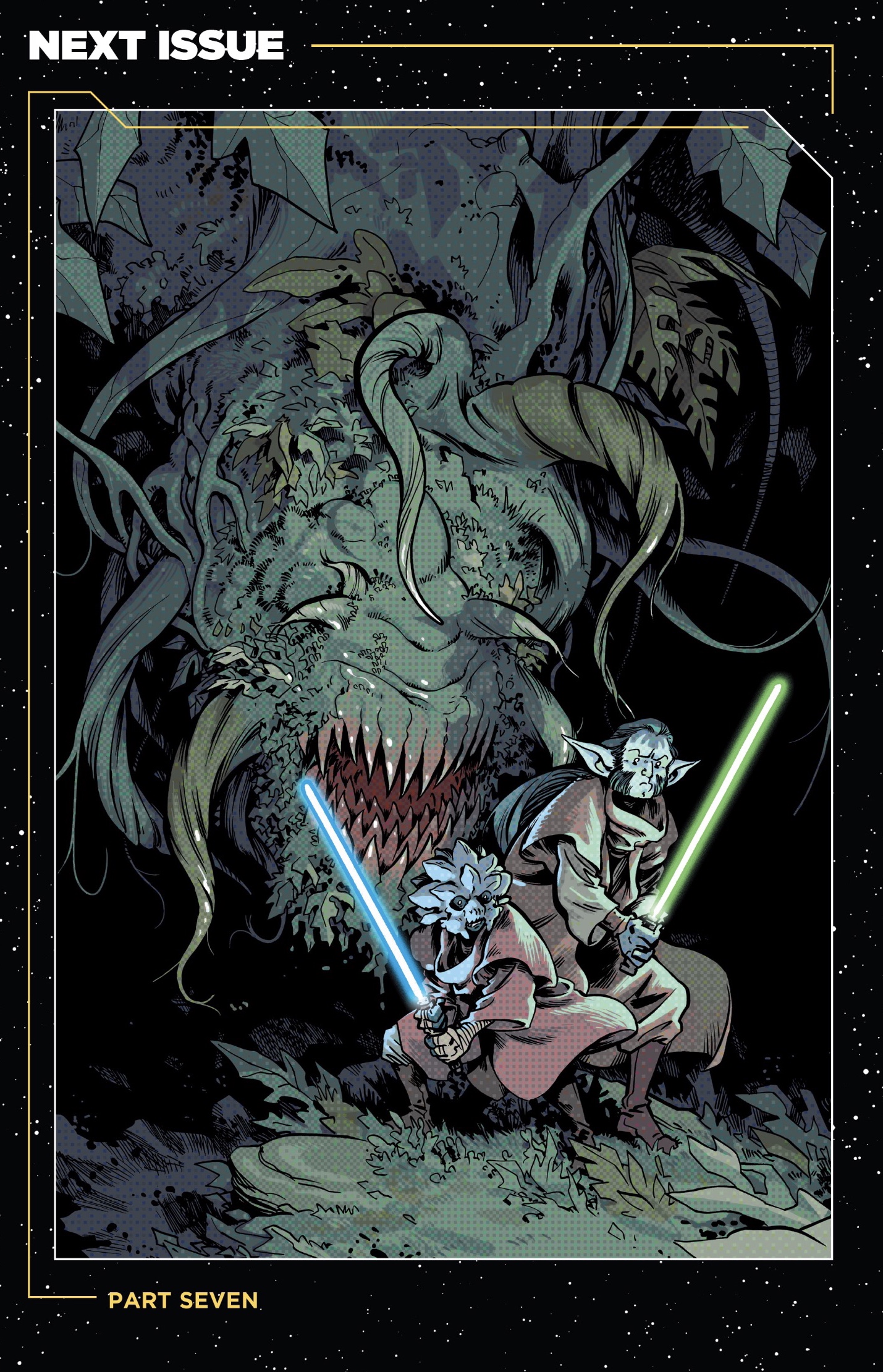 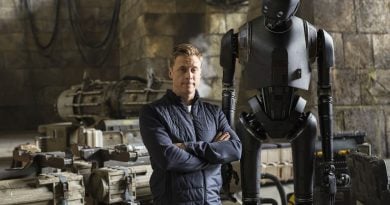 Alan Tudyk Tells Entertainment Tonight He Will Be Back as K-2SO at Some Point in Star Wars: Andor 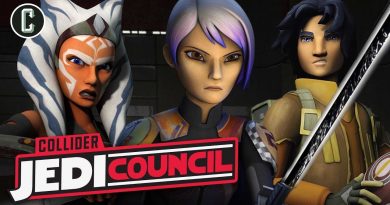 Collider Jedi Council: Will Ahsoka, Sabine and Ezra Appear in The Mandalorian? 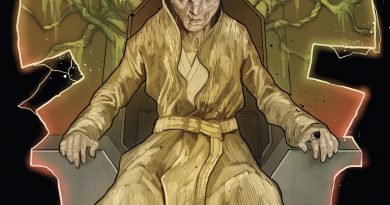